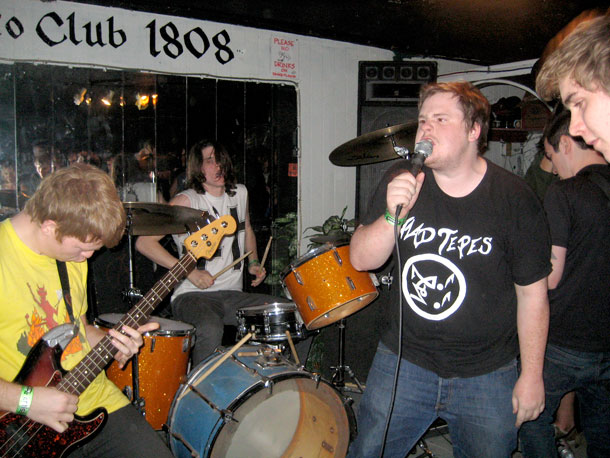 Posted: December 9th, 2009
"I have no weird allegiance with people just because they skate."

This here is a filthy, five-piece hardcore band from Austin, Oakland,  and Brooklyn. Wait, and how is that possible? Drummer Matt Lyons has no idea. We recently met at a bar in Williamsburg during his lunch break.  We only had 45 minutes, so he skated the four blocks from his job at a second-hand clothing store. Despite the distance, Total Abuse has released a few LPs, with their untitled next one—to be produced by Dean from No Age— dropping sometime this December. Over some quick Lone Stars, Matt and I discussed how played-out the lo-fi trend is, his old job as bus-route editor, how it’s gay to like somebody just because they skate, and how he recently got duped by one reclusive New York skater.

About your band—you guys have a couple stillborn albums. It seems like a band as spread out as yours couldn’t afford that.
Yeah, we have a lot of stillborns. We record with people who are really cheap; as a result, the albums don’t come out as well. The rest of the band wants to record something more heavy and produced, but I’m just happy with the shitty, lo-fi recording.

Lo-fi is pretty trendy right now.
Yeah, I don’t really like the trend. A lot of bands are doing this distorted pop thing that’s super
fucking cheesy. They’re so happy-go-lucky, but there’s no reason to be.

Life sucks.
Life doesn’t suck at all. I think everyone in Total Abuse is a happy, funny person.

He’s a skateboarder. He just broke his wrist doing it.
I have no weird allegiance with people just because they skate.
That’s the pull-quote!
At this point, skaters aren’t even unified at all. There are so many different types of skaters. When I was a kid, skateboarding was a really exciting, underground thing. Now it’s not.  Now your mom thinks skateboarding is cool. 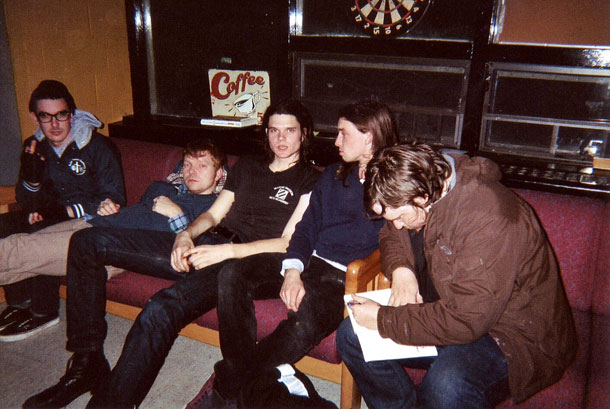 I read Total Abuse broke up to pursue experimental synthesizer projects.
That was a joke. Our singer has his own noise project with really saturated synth stuff.

But you guys didn’t break up over it.
We almost broke up for a while because I moved to New York City from Austin, TX, where most of us grew up together. Three still live there, while one of our guitarists lives in Oakland. We’re just so spread apart right now, we didn’t know if we could make it happen.

Why did you decide to move here?
In Austin, I was the only one who wanted to practice. I stopped caring about the band.

How did you get to New York?
I drove my friend’s U-Haul. I had gotten back from tour and my terrible job said they didn’t have any more work for me.

You were like, “Take this job and stick it!”
Yeah, I was stoked! But then I tore my meniscus in my knee, so I was lying in bed all day. I couldn’t move, and I thought I’d never be able to skate again. I was drinking wine everyday when I woke up. It wasn’t good.  Then a friend came to town from New York, and he asked me to drive his U-Haul full of stuff here. He said I could live with him for a month for free. I was going to get surgery because I had health insurance, but the doctor just shot it with steroids and the swelling went down. Now I’m skating again.

Suspect. What did you do at your old job?
I had gotten a degree in GIS, which is geographical information systems, like making maps and shit. I had gotten a terrible office job.

Are you a big fan of the cartographer Amerigo Vespucci? They named the Americas after him.
I don’t know who that is. I was never really into cartography. At my GIS job I would research bus routes to make them more efficient. The company would take a city like Chicago as a client. I would then take all this data about people’s commutes and try to make better bus stops and routes. I’m not a cartography or transportation freak. I just did it as a job to make money.

Are there any bus routes in Chicago you can point to and be like, I totally saved people a half-hour on their commute?
Oh, I don’t know. But my boss there was older and he was into hardcore. He would tell me how one of the first shows he saw was Black Flag in the mid-’80s. He thought he was cool because he was into that shit, but he was really just a jaded asshole. He wrote a shitty book about him going to hardcore shows like it was some kind of fantasy story.
You mean he was moshing with griffins and wizards?
No. That would be pretty fucked up, actually. He had really bad grammar and he was really naïve. But dude! Anthony Pappalardo came into my work today to sell a bunch of Converse. I bought a pair and when I got home I realized they were two left shoes! Pops is quite the con-artist.

Check out the Total Abuse myspace page to listen to some songs.
© 1981–2020 High Speed Productions, Inc.