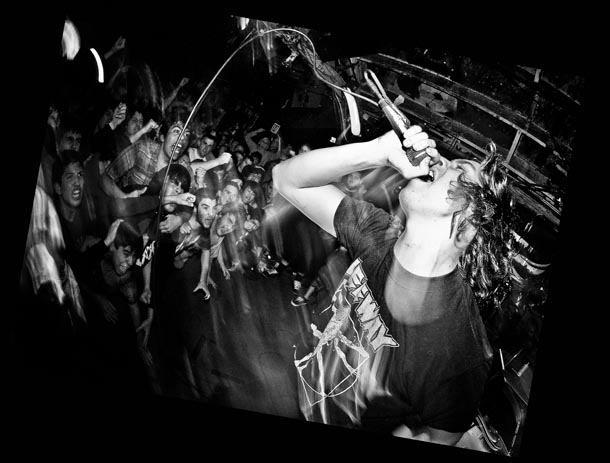 "hardcore has always been about being yourself"

A band as pissed off as this could only hail from a city with as much political leverage as Sacramento, CA. A visit to one of their shows will demonstrate their choleric energy; with a blast of lively violence that can be hard to get these days from all of those punk kids gone soft, they serve as a welcome change for anyone tired of attending show after show to find a sea of stoic, unmoving bodies. You might find yourself getting punched in the back of the head, but all in good fun. Lee (vocals), Garrett (guitar),  Rashod (drums), and Spencer (bass) cordially took a break from their seemingly endless tour to answer a few questions.

Do you guys have roots in skateboarding?
Spencer: I used to skate with my friends all the time, all through middle school and early high school. That’s actually how I got into this music thing. We used to try to skate to the fastest shit we could find and that just lead to rifling through records at local shops and discovering a bunch of pretty cool thrash bands. Here we are 10 years later and I’m still that same kid.

The term “hardcore” has been thrown around in reference to a variety of sounds in the last few years. Where do you feel Trash Talk fits into the genre?
S: For me, hardcore has always been about being yourself, and that’s where Trash Talk fits. Since I joined the band in late 2005, we’ve done everything in our power to put out  as much music as possible and stay on the  road for as long as we can, no matter the hardships encountered.

Your new album dropped in July. How does it differ from your previous releases?
Lee: With this record, I feel that we’ve found our own sound. The fast parts are  way faster and the slow parts are slower.  This is the first record that we’ve recorded analog, and it shows. What you hear is  what you get.

What did you grow up listening to?
S: A lot of Pink Floyd and Jethro Tull from my dad and a lot of contemporary R&B from my mom. That shaped my musical tastes into the twisted rat’s nest that they’ve become.
Garrett: I grew up listening to a lot of  ’90s hip-hop—Big L, Raekwon, Redman—and old Motown like Marvin Gaye, The Supremes, and Stevie Wonder that my mom would sing along to while cooking breakfast or cleaning.

Playing punk shows generally isn’t very lucrative. What are your day jobs?
S: Life’s too short for day jobs.
G: I work at a boutique in Seattle called the Winners Circle whenever I’m home, but I haven’t been there in so long that I’m  probably unemployed.
L: I haven’t had a job in years. The last job  I had was being a security guard at a water park with Spencer. Those were the days.  We would just sit outside at the front gate  and look through bags and confiscate  people’s food.

Your tour schedule looks exhausting. What’s your favorite city to play in?
G: My personal favorites would have  to be 924 Gilman in Berkeley, CA and  Chain Reaction in Anaheim, CA.

What’s the male/female ratio at  your shows?
S: It all depends on where and who you’re playing with. Ideally, the ratio is 50/50, but it’s typically more like 85/15.
Your blog features some pretty crazy tour tales. Any story in particular that stands out as a favorite?
S: I plead the Fifth.
L: I can’t go too wild in this interview.  Stay up on the blog. Wild shit goes down on the daily. (www.trashtalkhc.com)

Listen to Trash Talk here or check their myspace for upcoming shows.