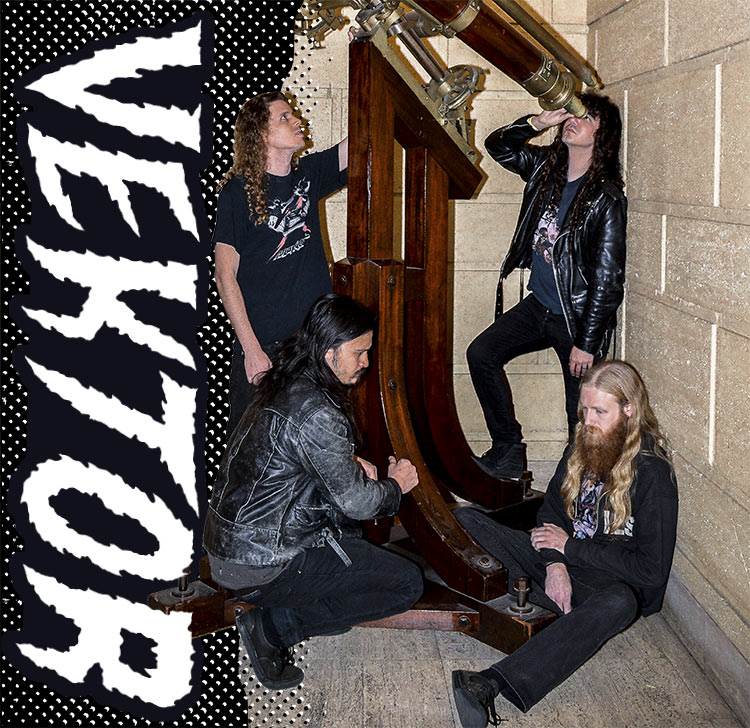 You want to know what metal sounds like 100 years into the future? Listen to Vektor’s new album Terminal Redux. The musicianship contained in this piece is scary. The way the band lets the instruments tell the story of space desolation as much as the lyrics do is addictive. Vektor’s delivery is chaotic, yet organized, filled with technical twists and, of course, enough blast beat sections to keep the most hardened heshers occupied. I got ahold of axe man and vocalist David DiSanto of the quartet to get the quick skinny on the band’s musical inspirations and space aspirations. —Sam Hitz

What inspired you guys to turn this latest record into a concept album?
I don’t know why but it’s just something I wanted to do for awhile. From the start it’s always been about big crazy sci-fi ideas and things like that.Maybe when I was a teenager I heard Rush’s Hemispheres and there was a lyric in there: “We will call you Cygnus, The God of balance you shall be,” and ever since that it’s been kind of ringin’ around in my head. And five to six years ago I was thinking about it more, doing a little bit of research on the Cygnus constellation, the legends behind it and it helped spark the whole story for the album.

Any other concept albums that stick out in your head that may have inspired you?
Emperor’s The Discipline of Fire & Demise. That one is, like, classical music with distorted guitars. So many layers and the compositions are insane. It’s probably my favorite concept album.

You guys toured with Voivod. How was that?
That was a dream come true for us, dude. Voivod has been one of my favorite bands for 15 to 16 years!

You guys pay a great homage to ‘em and I think a lot of people dig that and you do it in the right way.
Yeah, it’s good to pay homage without blatantly ripping people off. They definitely appreciated it too ‘cause they were the ones to ask us to go on tour. That was a huge honor for us. We were on tour with them for a month.

Did they ask you to join in with them on any songs?
A few nights into the tour all of us in Vektor would jump on stage and start singing the song “Voivod” with ‘em. That was pretty awesome.

Vektor really pushes the envelope when it comes to technical playing. What was the most challenging part to execute on this album?
It was really just writing the album.  So much thought had to go into it, making sure all the details lined up. Like, all the songs had to feel good for the type of thing I was trying to portray with the lyrics and ideas. And really just piecing it all together because I had this huge idea and it was just time consuming.

It’s a crazy road to navigate when I’m listening to it. There’s just so much content. Any specific part, though?
The most challenging song was “Recharging the Void.” There’s so many riffs in that and to nail every part, it’s just like a brain exercise trying to remember all those notes.

This might be too early to ask, but where do you guys go from here? Any new plans spawning?
There always is. I can’t really turn it off. I always have musical ideas in my head. Not really any plans, though. We just finished this album that we were contractually bound to with Earache and we’re kind of just, like, free to do whatever we want. We got some West Coast dates coming up in November and we’re going to focus on that tour: full on album promo/headliner tour.

What do you think it would be like to record in space? It’s got to happen eventually and I hope Vektor will be the first to do it.
I don’t know, man, ‘cause no one can hear you in space, so—

Imagine a recording studio in a space lab.
Dude, that would be killer doing somersault flips in zero gravity while you’re recording a solo!

Exactly! Next thing you know your solo is double-timed because of zero gravity and shit. A whole new level! Well, that’s pretty much all I got. Any last words for the mag?
Huge honor getting interviewed for Thrasher! I’ve been reading it since I was 12 years old. I’m 32 years old now so it’s awesome.

No problem. Your work’s appreciated. If you guys start a GoFundMe account to get Vektor into space I’ll be the first to contribute.
Alright, lets make it happen!