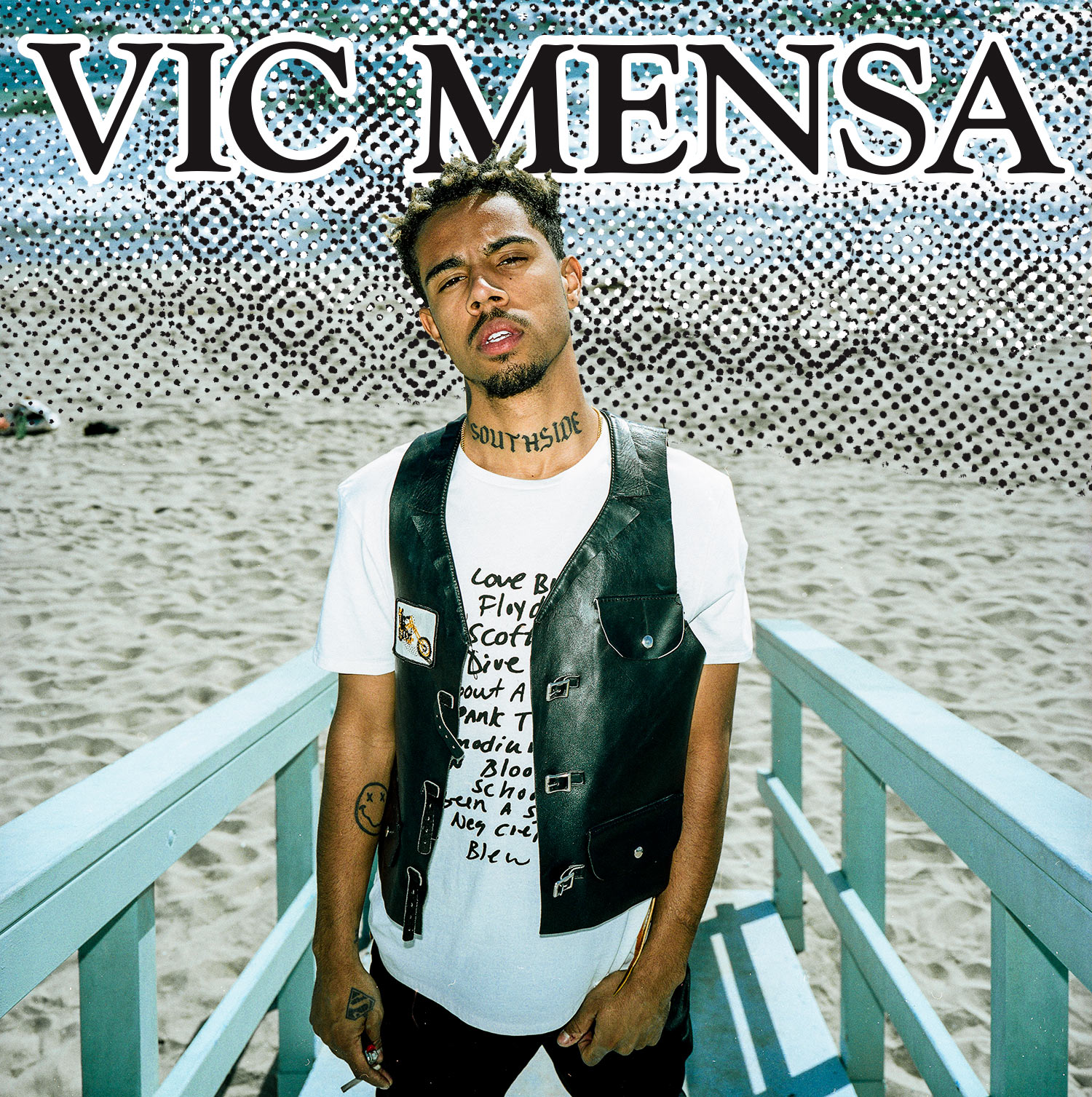 His hair is bleached out and he’s got a bunch of clever tattoos. Dressed in black-holey jeans, a sleeveless white t-shirt and a black leather vest, Vic Mensa looks more like a skater punk than the typical rapper I expected. The Echoplex is a decent size venue and the show was sold out, which welcomed the familiar feeling that I’m not as in the know as I seem. I showed up early in hopes that I would get to take a few portraits before the live show. He was sound checking but it seemed more like a rehearsal as it was taking forever. My impatience immediately subsided as I got sucked into the music, his voice and watching Vic work out his set with the band. There was an ease and comfort about how he interacted with them, and I could sense that he was a bit of a perfectionist; maybe impressing a big LA crowd was on his mind. What stood out immediately is his honesty. There’s nothing fake about him (except maybe that bleached hair). After he slayed his set, stage diving and hyping up the crowd to the point that fans were screaming his name, a guy turned to me and said, “That was the best show of my life.” Although his backstage was the standard Hollywood scene sprinkled with industry and celebrity, it didn’t feel douchey at all. I, of course, was completely impressed, a newborn Vic Mensa super fan. So naturally, I did what anyone in my position would do, I got his number. Interview by Lindsey Byrnes | Photo by Brock Fetch

Vic, where are you? What are you doing?
New York City. I’m kinda just kicking it. I had a show at NYU last night.

And how was that?
It was dope.

I heard you were back in LA last week, making all sorts of statements at the VMAs. Do you want to talk about it?
Yeah, basically I was raised out of the home just with a lot of distrust and disregard for, like, establishment, and as I grew up as a black boy in America and started turning into a black man, I had a really strong anti-police sentiment just from being profiled and brutalized my whole life. So I kinda just wanted to use this space to talk about it. And I recently had finished Assata Shakur’s biography and it just blew my mind that in 2014 she was put to the top of the FBI’s most-wanted women list, when she was arrested as a political prisoner in 1977. The fact that they’re still holding on to something like that so far down the road is something that a lot of people don’t know about. I just thought that it was something people should know about to show how crooked and misguided the people who run our country are.

Well, it’s really nice that you get to use this time. I mean, a lot of people don’t use their popularity to make a difference or to speak their mind. Do you plan on doing more of that?
Fo sho. I mean, I’d rather hang out with my niggas on the street corner than, like, at an award show. So if I’m gonna be in those spaces then I want to bring the same sensibilities that I bring to the rest of my life. I might rant off just in daily life about burning down the White House. That’s how I feel, so if I have an opportunity to rant off to more people then I’ll do that.

So what were you guys working on?
I was just playing Kanye new music of mine that I’m super excited about and listening to new music from his album and just, like, freestyling and vibing.

Planning his campaign?
Yeah, you know, I’ll probably be his running partner.

Do you want to be vice president?
I don’t want to be vice president. If I’m ever going to be president, which I think my neck tattoos might take me out of the running for—I was thinking about that the other day after Kanye announced his presidential bid. I was taking a shower a couple of days later and I was just looking at myself, like, fuck. I can’t even run for president; I got all these tattoos on my neck.

You have to have a clean neck to run for president? I don’t think so.
I think it probably is. I don’t think that neck tats and face tats are allowed. But maybe I could break the rules. I’ll be the first president with a Southside neck tattoo.

Why did you leave LA?
LA is the only place where people know my name and still walk up to me and ask it. And I think that was really representative of a lot of the transplant people in LA. I just found everything so phoney. I’m from Chicago and that’s where I created all of my most prized possesions, which are my songs. And so there’s something about the energy in Chicago, or just the reality and the humor, that didn’t exist in LA, and I was just really lonely in LA because I wasn’t with my type of people.

But you seem so chill.
I know. I am chill but I do think that I’ve had a lot of good things happen to me for a purpose, you know? I fell off a bridge when I was, like, 17 years old and got electrocuted by 15,000 volts of electricity—fell 30 feet. The doctor told my Dad that he’d seen people hit with that amount of electricity just burnt to a crisp. So on the books I should have died, so I do think that shit in my life happens for a reason.

Crazy. You can do anything. You can fly.
People think I have electronic super powers and shit now.

What are you working on right now?
There’s no date on my record; it’s coming out, though. Just working on it; it’s really dope. I’m making some really fucking amazing shit and just tying it all together. There’s a lot of music done for it, though. It’s called Traffic.

Do you have more collaborations in the works or are you doing it on your own?
I mean, it’s mainly me other than producer collaborations. I’ve done a lot of stuff with Mike D. I played my music for Rick Rubin and he was a big fan and that was fuckin’ momentous. But it’s mainly me. Most of the songs I make people haven’t really heard ‘cause the shit I’ve come out with has been few and far between and I’ve been holding all of the personal pieces for this full body of work. But the songs that I make for that shit, like, it would be hard to put a feature on them because they’re so personal. It’s just some of my most vulnerable and personal moments. It’s hard to put somebody else on a song that’s so about your life, you know?

What were you into first, skating or music?
Skateboarding was my introduction to rap and the first rap song that I really liked was KRS-One “Step Into A World.” It was off this Zoo York VHS tape that I had. And after I got into that, it kinda opened up a whole new world for me. Plus, skateboarding was also a huge influence on my sense of design and graphic design. Being a skateboarder is kind of what got me into being a graffiti writer and being a rapper and just opened up hella worlds for me. I feel like the influence of skate culture on popular culture is somewhat minimized. The influence of skateboarding on me as a rapper is gigantic. It put me on everything. Skateboarding was a huge influence on the person I became.

When did you shift from skating into music?
I just lived on the south side and then skateboarding wasn’t that popular in black neighborhoods. So I didn’t have people to really skate with until I had already been, like, skating for so many years to the point where it was, like, this isn’t my calling. But I would say at least three-fourths of the people that tour with me can do a kickflip. It’s just that a lot of the dopest niggas liked skating at a point in time.