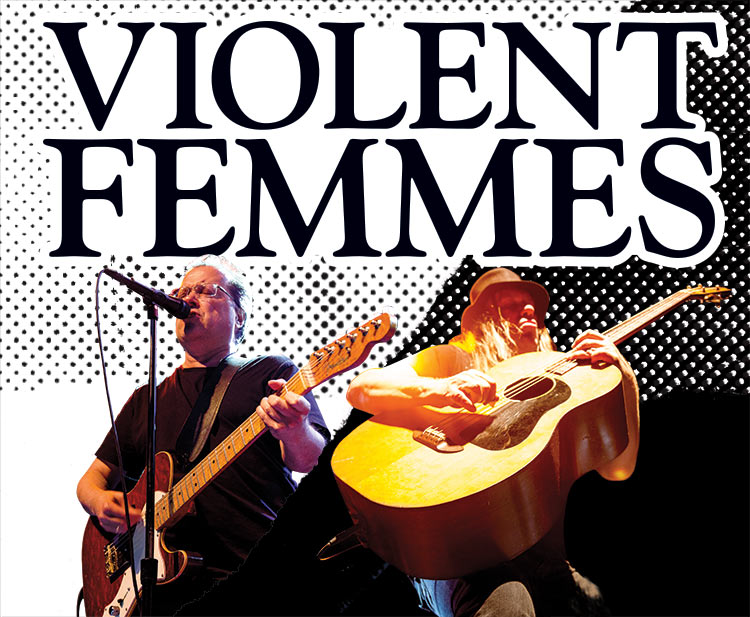 Gordon Gano is driving through Northern California from San Francisco to Portland, and routinely gets distracted by the “amazing vistas of natural beauty” during the course of the 30-minute phone call. The Violent Femmes frontman is also seemingly in awe of his newly-mended relationship with original bassist Brian Ritchie; a relationship that has been a source of turmoil for the past 35 years. Somehow, the longtime band members found a way to record their first full-length album since 2000’s Freak Magnet. Titled We Can Do Anything, the album name is sarcastic commentary on their inability to get it together long enough to record some songs. As Gano continues his trek across the country, he had time to discuss the new album, his status with Ritchie and the real meaning behind “Blister in the Sun.” Interview by Kyle Eustice | Photos by Jordan Joseffer

I love the song “Traveling Solves Everything” on the new record. Do you believe traveling solves everything?
One thing I’ll say is that any song is not necessarily something I believe. In fact, sometimes I stress things in songs I think would not really be a good thing if somebody did believe this. It just felt like a good song, so that’s a little tricky. Sometimes I do believe personally certain things in songs and sometimes I don’t. With the traveling thing, a couple things come to my mind that got me thinking and writing the song. I was in the midst of, let’s just say—domestic turmoil. I was in a hotel room and I was not on tour. This was quite awhile ago. I was speaking to somebody who said, “You have a great opportunity. Why don’t you just get on a train and not have a destination and just go? That could be a positive thing.” I started thinking about it and I did not do it, but I ended up writing a song. I also like the idea that there’s a certain philosophy that’s the exact opposite of that. I think it’s even expressed with a catch phrase that I forget what that is. But it’s the idea that traveling actually solves nothing because wherever you go, that’s where you are, so you have your same problems with you. I can understand that, absolutely. I felt like this song is expressing a contrarian point of view that’s considered to be the correct thing.

It could be.
It depends on the situation. Sometimes to travel to change the environment is the essential thing to do as a starting point. Other times, it won’t be a good idea. I just had fun. My thoughts were on the subject and I kept going with it as a song.

We Can Do Anything sounds empowering. Where did the album title come from?
It relates to a song on the album. I think that’s what triggered the thought in my mind. It’s funny and humorous to me because it was, like, 15 or 16 years that we couldn’t do an album, which shouldn’t happen. There were always the songs and passion as musicians, but we had so much we’d disagree on, so we weren’t able to get in the studio and record an album. In the silly Violent Femme world, it’s a little miracle we were able to do it. That’s the idea that we can do anything. We can even make a full-length album and that’s like an amazing accomplishment. That’s unfortunate in a way because the title is so similar to the song, nobody in the band can say with complete confidence what the name of the song or the album is because we get one of the words wrong. I don’t know why that is. It’s not just me. So the song is “I Could Be Anything” and the album is We Can Do Anything. I’m getting better at it.

What made it possible this time around?
There was a progression involved. We thought we’d never play together again, but we got a completely unsolicited offer from Coachella, who wanted us to get back together. They made an offer that made us say, “Maybe we should try to figure out how to do this.” It was, like, “Wow, if we don’t do it for this, we’ll never do it.”

That’s their thing. They’re good at that.
Exactly, exactly! That’s like a thing. I think that’s why Iggy and The Stooges got back together again. That’s one that I know of. That’s, like, their thing, which is really, really cool. The music sounded good, it was fun and people loved it. We did more festivals and then we started talking about, “Well, I have songs,” and we want to record. It took awhile to figure out how to record. We both had strongly-held beliefs of how it should be done and how it should not be done. I wasn’t the passionate one on that front. I’m more about, “Oh, we can try this or try that.” It was difficult, but I think management helped a lot with it, just to get us to show up. We first did an EP about a year ago. That turned out to everybody’s satisfaction and that went into talk about doing an album. It was a step-by-step progression. Even with the album, there were a couple of times during the first sessions I wasn’t completely sure we’d be able to get through the day without one of us deciding, “That’s it, I’m just outta here.” But that never happened.

I read that the two of you battle on the small things too. How do you manage that?
We have such different thoughts sometimes it seems about every thing, whether anything of real importance or not. We see it in an opposite way very often, but we play music together well. It really works—creating a sound of this band Violent Femmes. It’s a special kind of thing and I think we both recognize that. We don’t yell at each other or anything. It’s all very calm. Sorry, there’s no drama to report. There really isn’t. We work because of the music. We can communicate because of the music. You can’t deny that.

You have an unmistakable sound; that’s a huge sign of success.
You’ve hit something. I’m in complete agreement with you. There’s something special and certainly we can all think of other groups that have that as well, but it’s not such a common thing at all. It’s because how we play as musicians and the sound of my voice, that people say they know when they hear it. There’s also the choice of instruments and that’s not a small thing. Brian has predominately played an acoustic bass guitar. The way he plays it is really unlike anybody else. We’ve had different drummers over the years, but our original drummer Victor DeLorenzo chose to play primarily with brushes. It made a hybrid of jazz and rock kind of approaches to things. We’ve always continued that with different drummers we’ve had through the years.

In all the years of listening to “Blister in the Sun,” there’s one line I’m confused about: “big hands, I know you’re the one.” Who is big hands?
The mystery of it is probably more attractive then telling you what I was thinking at the time, but I’ll tell you. The idea of saying somebody’s the one, traditionally they’ll have blonde hair or be described as “tall, dark and handsome” for a guy. In our culture, it’s been cliché. Unlike Donald Trump, I’ll come right out and say it. My hands are very small. I don’t know if you know about that.

I’ll trust you on that one.
I was thinking of an opposites attract thing or something like that. There wasn’t one person in particular I was focused on. It was just something that popped into my head. I wondered how much it would have changed for people if I picked feet.

Are you still on the East Coast?
For the majority of my life, I lived in New York City. I’m not there anymore. I’m out in the western lands. We’ll leave it a little vague. I’ve never used to be vague about anything, but recently, it feels weird when a handwritten note asking for a guitar pick or autograph shows up in your home mail. Figured I should be a little more careful. It’s in the mountains.

How does it feel to be back as Violent Femmes? Is it different from the early ’80s?
The early ’80s were very different. We were all in one van. For our first tour, we would just stay with somebody’s family or friends or make some friends that night and crash at their place. Or we’d say, “Let’s go party,” and then we’d fall into a stupor at some point. For me, I just wasn’t into that. I was like the guard dog that would sleep in the van so whatever neighborhood we were in there was someone to put up some resistance if someone was trying to break into the van. I was the human car alarm. We never had a problem. In that sense, it was different. In the mid-to-late ’80s, when things had gotten to another level of popularity, since then to now, it’s basically the same thing. I think I enjoy being a performer more than ever. I have more of an appreciation of the whole experience. The joy you can see and feel when we’re playing at one of our shows is pretty amazing.