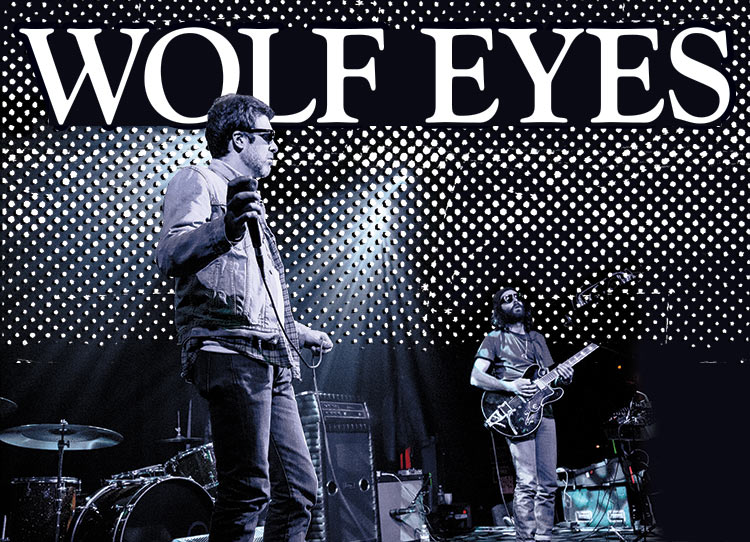 Trip Metal. Psycho Jazz. Wolf Eyes. As the current reigning and likely eternal kings of US Noise, Wolf Eyes cannot help but be a ghoulish blight on the musical landscape, a great big pimple of terrifying, righteous pus that grows on the chin of the American song. Wolf Eyes is Inzane Jonny, Nate Young and Crazy Jim. Interview by Brace Belden | Photo by Jordan Joseffer

So you guys are on the road right now with two actual bands.
Nate: It’s kind of a weird contrast. I mean, we’re playing with two rock bands. What’d you think? Was it hard to digest?

Like having a booking agent and all that?
Nate: Not that so much. We’re reaching the point where we can’t really function with other people at the wheel. What we need to do is take control of the whole spectrum ourselves. This was a good experiment. We do this every couple of years—it’s a cycle we do. You know, a stress test.

Where you put out a record on Third Man?
Nate: Or Sub Pop. Every couple of years you gotta stress test and see what’s up. I’m not saying I plotted this out, but I am saying this seems to be a pattern. It’s interesting what that does to everything too. With the Sub Pop thing people were busy for years.

This decision didn’t really have anything behind it; you just said, “Well, we’ll put this out on Third Man”?
Nate: Well, we’ve got that background with Third Man, with Jack [White] and coming from Detroit and sharing spaces and pulling pranks and all that. It just adds up to a reality that is another cycle that is really entertaining and bizarre. But the thing is, people get really turned off by Jack nowadays.

Edward Scissorhands—
Nate: It’s interesting, and I think people give him a bad rap. It’s not him, it—so I have this thing with my friend. He’s a spazz and sometimes he freaks out and sometimes publicly and I’m just, like, “C’mon.” And I have to say, “It’s not you. It’s me. I can’t handle how you’re dealing with this.” And that’s how I feel about Jack. It’s not him. I can’t deal with it. Everything is fine. There’s no harm. There’s no harm in anything. I don’t know. When you walk into his store [Third Man Records] and everyone’s dressed in a certain way—it’s a little like TGI Fridays. It’s not right. It’s not right. I don’t understand.

How are they dressed?
Nate: Black and yellow.

What’s up with your archive?

There’s all that old Wolf Eyes stuff that comes from American Tapes and Hanson—
Jonny: Just a lot of stuff. A lot of killer Trip Metal stuff.

There’s a hell of a lot of it. 500 records?
Jonny: It’s cool. It sleeps at night and duplicates itself. It’s like horro movie The Stuff. It sleeps while I’m sleeping. It talks to itself and it breeds more. It’s just the same song done over and over again, but it gets a little slower every time. They’re brothers. Inbred. “I want to listen to them all,” said no one. It’s the starchive. Music for circumcised inbreds.

God, Detroit sounds dark…
Jonny: I was at my local park and it was just me, a rager I’d never met before in my life, a drunk grandmother and her grandkid. The drunk grandmother was wasted. She calls me and this stranger over and she’s, like, “Look, I’m gonna skate this skatepark.” She drops in and falls straight onto her head and throws up and her eyes are all over the place. She’s talking in tongues and me and this stranger have to dig in her purse to find a number while her granddaughter’s freaking out and while we’re calling 911. We finally find her daughter’s number and we say, “Your mother is here drunk with your daughter. She has a severe brain injury.” I never saw the dude again or the mom or anyone. Not a lot of kickflips that day.

That is a horrible story. Is that your darkest skatepark story?
Jonny: What’s darker than that, bro?
Jim: Didn’t you find a fleshlight?
Jonny: Yeah, at the bottom of the pool next to a piece of shit.

Didn’t you play a show for the Church of Satan?
Jim: Yeah! So we’re going to play this thing, right. It’s like 90 degrees during the day, and we’re loading into this warehouse that we don’t know the name or the street until, like, half an hour before we go there. They send us an email, we get there and there are all these ravers in bulletproof vests.

Why bulletproof vests?
Jim: Everyone was paranoid. There were bomb threats; you know, obviously the Christian militias were trying to figure out where the thing was. Everyone was kind of playing with this crazy vibe, man, like there are people that want to murder you for doing this. That’s not a joke! You had to sign over your soul to get into this first party—
Jonny: There was a decoy party that everyone went to and waited at just to get directions to go to the real party, which was on the other side of fucking Detroit.

So they made you sign away your soul to get into the decoy party? Jonny: They absolutely did.
Jim: Everyone who was in that building had to sign away their soul to the Dark Lord.

Soldiers for Christ or whatever couldn’t get in, then. Wily.
Jim: It’s smart in different ways. If you really get paranoid—that is smart. That’s also a really good way to throw a party. That’s what they’re saying; they’re throwing a crazy cool party.
Jonny: The party was nothing but loners and outsiders. No hipsters, no nothing.
Nate: As soon as the bass dropped, lead paint dropped and debris start sprinkling down. It had rained during the day so the place flooded, and now we’ve got this lead-paint chip. It was literally raining lead paint and about 110 degrees in there. It was covered in about six inches of water. Everyone is dressed to a T, either wearing crazy devil-horn shit or wearing—

Cloaks?
Nate: Tons of cloaks. Also a ton of suits and tuxedos. Really, really crazy—
Jonny: A lot of university teachers checking it out. Probation officers checking it out. Loners and boners too.
Nate: So it floods, right? And everyone is, like, wading around in this lead-paint stew and they’re sweating fucking balls because it’s 110 degrees in there. And it’s so insane. We go up on the stage and we are actually supposed to play the ambient music for the actual ceremony.

That’s a great ceremony.
Nate: Did you see us tonight?

Yes.
Nate: That’s exactly what we did.
Jonny: Except Jim was on 7 hits of acid.
Jim: Hundreds of people yelling, “HAIL SATAN!”
Jonny: Thousands!

Jim: You couldn’t actually hear the amps.
Jonny: Super freak.
Jim: It was actually really magical and beautiful. I kind of regret being so fucked up on acid because I didn’t witness everything.
Jonny: They slaughtered a goat.
Jim: That’s true.
Nate: It was really kind of sweet. They did this speech that was—a ritual, I guess? A sermon? Incantation. But it was more like a speech, really. Declaring we have the right to do this and we all have this in common. This is what we are here to do. So anyways, they’re doing this thing, kind of heavy, and then we’re supposed to play and we start with this song and up comes the sheet and the Baphomet statue is right there. Everyone gets naked and starts fucking.

People were fucking?
Nate: Definitely.
Jonny: It was a straight-up scene from Hell.
Jonny: We touched Jesus’ slab. Same vibe
Nate: Jim, tell us a story about you and I discovering the homemade skatepark in Detroit and being way into it.
Jim: What? Uh, it was the opposite. This park was so shitty. Me and Bill went to where the old Tiger Stadium used to be, and there’s a pedestrian bridge which is a corkscrew of black asphalt that was poured in 1978 and has been eroded from weather since. It’s the worst! I don’t know why we skated that place.
Nate: Because we saw it from a distance and were, like, “Oh, man, someone’s building a homemade skatepark. Let’s go check it out!” So we go down there and we try to skate it. Within two minutes we both have bleeding palms. We’re just, like, “Who the fuck built this piece of shit?” and lo and behold, the fella pulls right up in his car.
Jim: Hops out with rollerblades on and starts fucking going to town on this thing.
Nate: He’s, like “Hey, how do you guys like our park?” And Jim just goes, “Fuck you.” Jim just starts cussing this guy out. “This park? Fuck this fucking rollerblade park!”
Jim: I got slammed so hard—this fucking rollerblade park. Imagine trying to do a backside kickturn and then you slip out and are faceplanting on the ground four feet below you.
Nate: It was gnarly.
Jim: Unskateable.

Unbladeable, though?
Nate: That’s the thing! It’s only meant for rollerblading!
Jim: The blades. He bladed it hard. I had to hang back on that session.
Nate: After you told the dude he sucked and ragged on his trash pile.
Jim: I was fuming! I was mad. It wasn’t anything to do about his, uh, sport choice. It was about his craftsmanship.
Nate: The worst is when you’re hanging out at the park and some guy shows up and waxes the entire 20-foot quarterpipe and does a grind all the way across it on their little weird rollerblades. It sucks.
Jonny: It’s like getting mentally circumcised.
Jim: Jonny’s circumcised.

What’re we packing? Size of the head only.
Jonny: It’s good. It’s good.

Not interested in the shaft.
Jonny: Does the job.
Nate: We’re getting sidetracked…
Jonny: Yeah, fuck rollerbladers, man.
Nate: We were trying to be cool with them, man.

Yeah, diplomatic, right?
Nate: I mean, we went and checked out their scene and the dude shows up and says, “By the way, this is rollers only.”