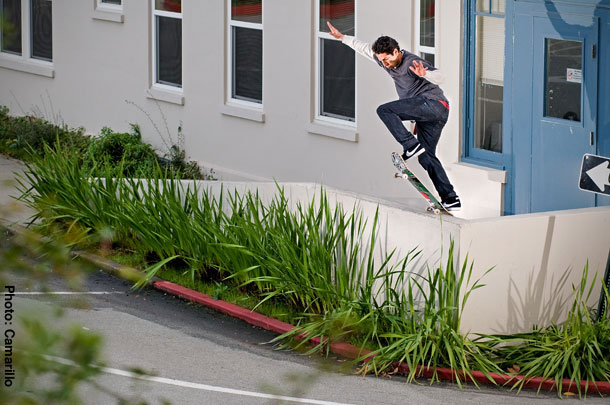 "I just skated ’cause I liked fuckin’ doing it."

What are you up to, Omar?
I’ve been skating every day, and I just finished filming
for the Workshop video.

It’s done? For real?
My part’s done. I could keep going, but I got the red light to stop from Greg. If it was my choice, I’d keep going.

Everybody waited for Guy Mariano—people may not be thinking about waiting for Heath in that way, but he goes for it.
He goes for it for sure.

When’s the video going to be out?
There’s 31 days until it has to be out. So the beginning of February.

Quick up to front board, Sequence: Zaslavsky

What do you think about Silas being SOTY?
I’m so stoked, man. You picked a perfect SOTY—an epic choice again.

What’s coming up in 2009?
Skating and travelling, having a good time. I want to skate where I want to skate and not be dragged around on tours all the time. That shit’s fun, but this year I just want to go on trips that I organize.

Me and Brian Anderson were talking last night about ’round the world, baby. We’re going.
That’s what I’m saying! That’s the shit I want to do. I’d be stoked to get that going. I want to work on getting better with my skating.

Getting better with your skating? You’re already pretty good.
I just want to keep it going and not slow down.

What’s the gnarliest thing you’ve ever done?
Maybe this hippy hop I did in Australia. I was with Dustin Dollin and all these fuckers—it was for the Nike video. Dustin said, “You can’t fuckin’ do it! It’s gnarly; it’s impossible!” And I said, “Nah, I can fuckin’ do it.” He had these Ray Bans that I really wanted—these cheapy fake ones—but the whole time I was saying, “Dude, let me have your glasses!” So we went to this spot and Dustin said, “Why don’t you hippy hop this thing?” I said, “Will you give me those glasses if I do it?” He thought I couldn’t do it. It was pretty hard. He left to get some booze and when he came back I said, “What’s up with those glasses?” He didn’t believe me; he had to check the footage. That was probably the hardest thing I’ve done.
You made it.
I fuckin’ buried it. 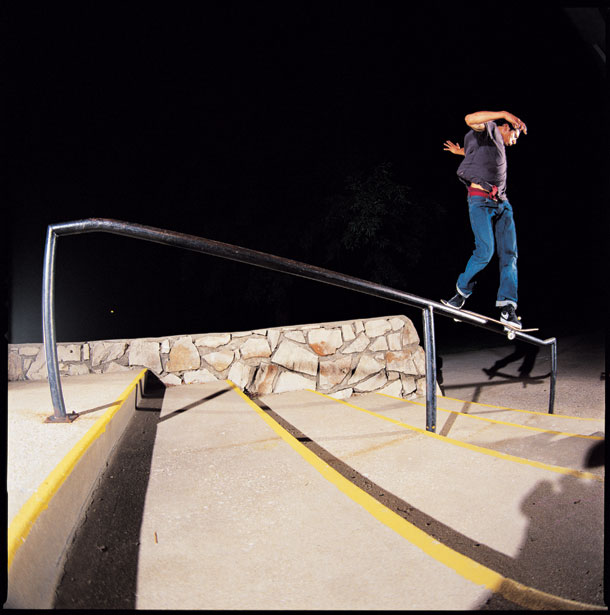 So you got on Foundation, and then you got kicked off…
Fuck those dudes! Just kidding. Those kids who ride for them are super cool.
Angel’s bad as fuck. I like Angel. He’s my favorite.
Yeah. He’s a dirtbag. I like him. But I never had any love for that dude Swank.

People tell you, “You gotta get more street.” And you’re like, “Look fucker, I skate every day. Do you understand that?”
That shit almost fucked me up when I was little. I didn’t have anyone who really supported my skating—as far as my parents, because they didn’t really understand it. I would send dudes footage of me grinding ledges into the dirt. You know that gnarly front board that Cardiel does off that ledge and then comes out over the dirt gap? When I was little, I’d send in footage of me doing a 50-50 and then riding down the dirt. I’d send them shit of me ollieing into trash cans and coming out with trash on my feet. I thought it was cool, but they’d be like, “Yeah…uh…do you think you could do handrail tricks like Smith grinds or feebles?” I didn’t know the whole industry side. I just skated ’cause I liked fuckin’ doing it.

I was talking to Brian—did you get that back lip?
No, I went for it dude. I’m gonna do it. I’ve been hustling, trying to get as much as I can because I want my video part to be good, and I fuckin’ went for that shit and for some reason my legs weren’t working. I was trying to get them working—there was one where I went up for a back lip but my truck went to a back Smith instead. It hucked me forward and my body was done.

Who’s the best skater in Sac?
Cardiel. Biebel. Stefan.
You have an older brother? He skates too?
No, he doesn’t. He’s into skating, but…

He sees the kinda cheddar you’re making, he oughtta think about it.
Nah. He’s cool. He’s hella been supportive of me.

Your parents are pretty proud of you now?
Yeah. It’s crazy. My mom was always into me skating when I was little, but my dad was always like, “What is this shit?” My parents come from Chile, and their whole idea of coming to America—for their kids—revolved around going to school. And I was always really shitty at school, but I loved skating. My parents thought I was wasting my time, thinking I had to be going to school, working for a good company, but I was like, “Nah, I’m having fun doing it, people are giving me free shit, I think I’m doing alright.” Now I get to help my mom out. She’s hella happy. My mom’s super rad. I think I’m making her proud.

Best place you’ve been on the road?
China was sick.

That trip was awesome. Ten degrees below zero.
It was cold, but it was fun. Going up in the tower.

Smoking hash in China! On the top floor, Shanghai Nights, baby.
And those cute little karaoke chicks singing to us?
Oh god. Don’t even go there.
That was fun. We had a good crew.

That’s what I’m saying. You get a good crew and anything can happen. So besides going around the world this year, what else do you have going on?
We’re doing a video for Analog.

Analog? You are hooked up. You must be making cheddar. How old are you? Twenty-two?
I’m 25 dude!
You got years, baby. Your 30s are your best. Be thankful you don’t have a name like Torey Pudwill and you’ll be alright.
I gotta tell you, my favorite nickname is the one you gave me.

It’s J-Lo, but it’s O-Zar. But yeah, Shanghai was banging. Brian’s three-flip wallride? Damn. The only thing that sucked was that motherfuckin’ Chet. Did you go on the Indy trip?
Yeah. Sketchy Chet. He was around. It was funny watching him and Omar Hassan going at it—they’re both like brothers, talking shit to each other.
Because they both have no brains. What’s your favorite country for skating? Australia?
Ohh… Australia’s sick. I’m going to Chile in a couple days.
Chile? Valparaiso, that’s the spot. Right by the beach.
Yeah! It’s like SF, but hella hot.

Alright Omar, you keep skating. You’re one of my faves so you keep on the ball homie. Like I said, I’m gonna work with Brian on getting this trip figured out, so we’re on.
Hey, thanks Phelps. I really appreciate that. Let’s do it. I’m there.