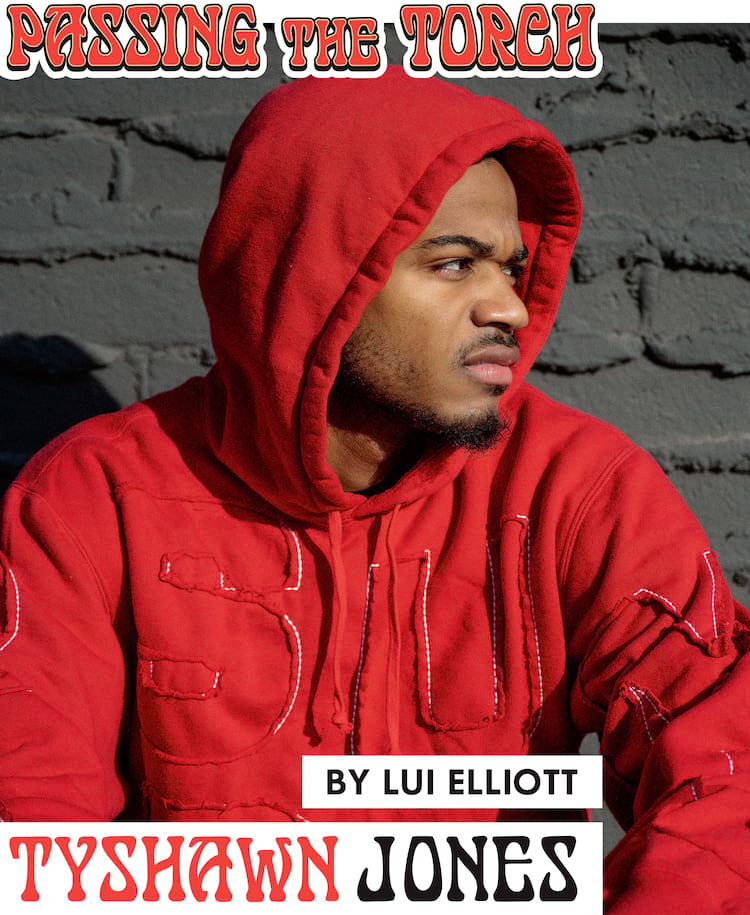 The 2018 SOTY race was one of the tensest we’ve witnessed. But after his jaw-dropping part in Supreme’s Blessed vid, it was clear to us that Tyshawn Jones should be the recipient of ol’ Rusty—the last one handed out by Phelps himself. But TJ kept a low profile in 2019 and I was hearing rumors of dropped sponsors and lucative business deals. I caught up with my friend to clear the air and ask how he feels passing the torch to Milton.

Yo, you know I had to check in on my son. Are you still in LA?
Yeah, I’m out here. You good, little bro? I want to make sure my little bros are okay.

It’s time, TJ. You gotta pass that torch, man.
They can pass deez nuts. I ain’t passing shit. It’s mine.

What’s your past year been like?
I’ve been chillin’, doing me. I’m working on moving and have had a bunch of other shit going on. A lot of time spent in 2019 was with adidas and getting my shoe launched. I kept it pretty mellow. I didn’t really want to be on the skate scene that hard. To me, it’s just kind of dry. I don’t want to put out another part after I just did that. I’d rather be low key and skate. I’m not going to go out and impress people. I already received the award so I don’t need to try so hard, so soon. Obviously, I’ve been skating, but on my own. I’ve been stacking clips and doing me.


Even without trying, Tyshawn and his crew impressed us in Miami. Take a trip back

Have you been working more towards 2020?
Honestly, not really. Last year I got a few tricks here and there but I skated more for fun. I’m not about to kill myself again. We went on that SOTY trip and that was fun but when we came back it was winter. We chilled for that, the summer passed and I really just skated on my own. I did a couple things at TF west and had a couple tricks for Candyland. All the tricks in that video were actually on the same day. People don’t really know that because I kept switching my clothes. I was sweating through outfits at every spot. The reason it was all in one day was that I had to get back to New York to handle some business. I asked the team manager how many clips I needed to go home and he told me four. I tried to do it the first day; it didn’t work. I didn’t get anything for three more days then out of nowhere it started working. Once I get one clip, I get a bunch—that’s just how it works for me. After the first one, I had them take me to spot after spot so I ended up doing all four tricks in one day.

You pulled the Steph Curry.
Exactly, once he makes his shots, he’s on fire. The next day I was out that bitch—first flight to New York.

I’ve heard some wild-ass rumors about you recently.
About what?

Don't feel like reading or just too lazy? Let your ears do the work with this raw recording of the entire interview

Shit about you quitting all of your sponsors and getting on Louis Vuitton.
They can speculate what they want. That’s what I’ll tell you. These kids are crazy out here. They’re too worried about what everyone else is doing besides themselves.I am still on all of my sponsors. What the fuck is everyone talking about?

People were calling and texting me like I’m your keeper or something.
I know. That’s what I hate about the skate industry—people move like 5th graders. Everyone talking about what everyone else is doing. Mind your fucking business. Even if I was, what does it matter to you? Why are y’all worried about someone else’s information? If I heard that P-Rod was quitting Nike, I’m not about to be calling people, asking if he’s actually quitting. I don’t give a fuck. They are mad weird. The skate industry is full of hoes.

You’re telling me. I got people worried about everything I’m doing. Y’all ain’t even like me.
Exactly, it is just like middle school. Everyone is always gossiping.

Has anything changed since you received the Skater of the Year award?
Not really. I guess some people that aren’t in skating know me as the guy who got SOTY. They’ll tell me, “You’re Tyshawn Jones. You’re the one that won Skater of the Year,” or some shit like that. Randoms come up to me to congratulate me. That’s really it. I guess it’s like winning a Grammy or Oscar for skating.


How crazy is it to think that it was the last award that Jake gave out?
In retrospect, it’s crazy to think about it. No one expected him to pass away and it’s really unfortunate, but if you knew Jake, he was a sick dude. He was hella cool and crazy as fuck. He personally came out to New York to let me know the news. The last time I saw him was at the party. I’m not even going to sit here and make up some shit for a crazy story, but that night was full of emotions. 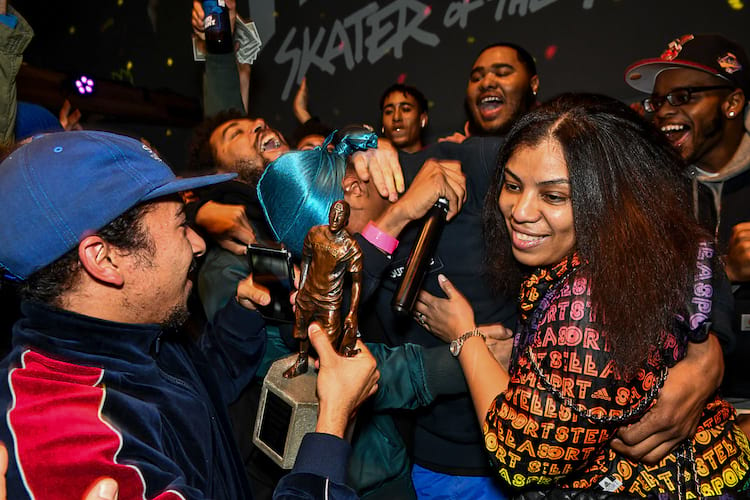 What kind of things would fans and haters say to you after you got the award?
Everyone has their favorites. No one I personally know said anything to my face. I see things on the Internet saying how they wanted someone else to win but I didn’t let it get to me. I kind of see it in the same light as sports. Whether the Warriors, Lebron or whoever the fuck wins, someone is going to hate regardless. Everyone has their favorites. Some kid’s favorite skater is that person, so they want to see their pick get the award. If I’m not their favorite skater, they’re going to be mad that I got it. There are people probably mad that Milton received it this year. Someone might’ve thought that Suciu deserved it more. It’s all subjective and no one should let that get to them if they won. Who gives a fuck what someone else thinks? You won.

Now that you have SOTY under your belt, what kind of goals do you have for yourself?
I would like to see if I could skate well enough to receive the award again, just to see if I’m capable of it. I don’t want to win no contests or anything. As for myself in my regular life, I want to buy my mom a house, a Rolls Royce truck, multiple Tastes So Good restaurants around the world and be happy. I would like to act as well. I’ve been trying it lately so you’ll see me on your TV screen in the near future. I’m not even going to list them all; people be hating out here. They only like you for what they know what you can do. Nobody ever wants to see you expand. I can sit here, say all the shit that has nothing to do with skateboarding and someone will tell me, “You’re trippin’. You already got this good at skateboarding and accomplished all of this, just only skate.” Like, no. I feel like it’s common to get trapped into a box and only do what you’re good at. I think everyone should want to expand, to do different things and explore. That’s what life is about. It’s too short to just do one thing. I mean, you could do one thing your whole life and enjoy it but that’s not for me.

On top of that, you’re skating for fun on your own.
But you know how it goes, whenever I see my friends who skate such as Na-Kel post anything about rap shit, the comments always ask why he’s doing that instead of skating. But we’ve been skating. Let us explore, do some new shit. 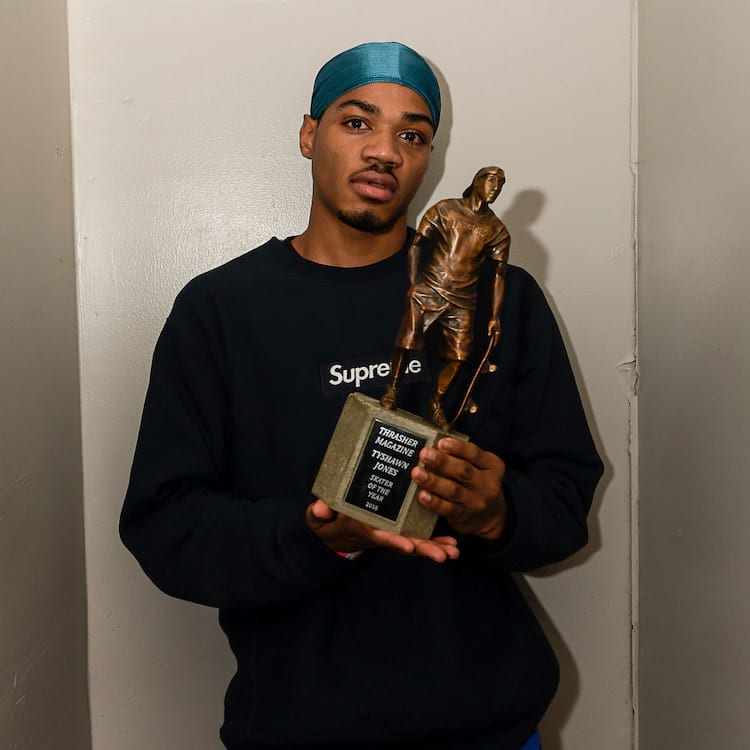 Where do you keep your trophy?
On my dresser at my house, but right now I don’t got a house because I’m moving. It’s in storage. Hopefully I don’t forget to do the payment. It doesn’t happen that quick but if you don’t pay the bill, they can auction your shit off. My SOTY trophy might get auctioned. Nah, I’m just playin’. I’m on point with my payments so that’s not going to happen. I know someone is going to read this and question why I don’t do automatic payments but I can’t fuck with it. What if they charge me more or do some sketchy shit? I pay all my bills manually, the old-fashioned way.

You are an old-ass man.
Autopay is sus. I won’t be checking my account like that so what if they charge me something crazy and I don’t see it. I wouldn’t know it ’til months later.

So about that award? Shit ain’t yours anymore. What do you know about Milton Martinez?
Shit, I know that nigga got a mean kickflip. He be hucking, so he deserves it. He can have that torch. He’s crazy, jumping down some big shit. Kudos to him. 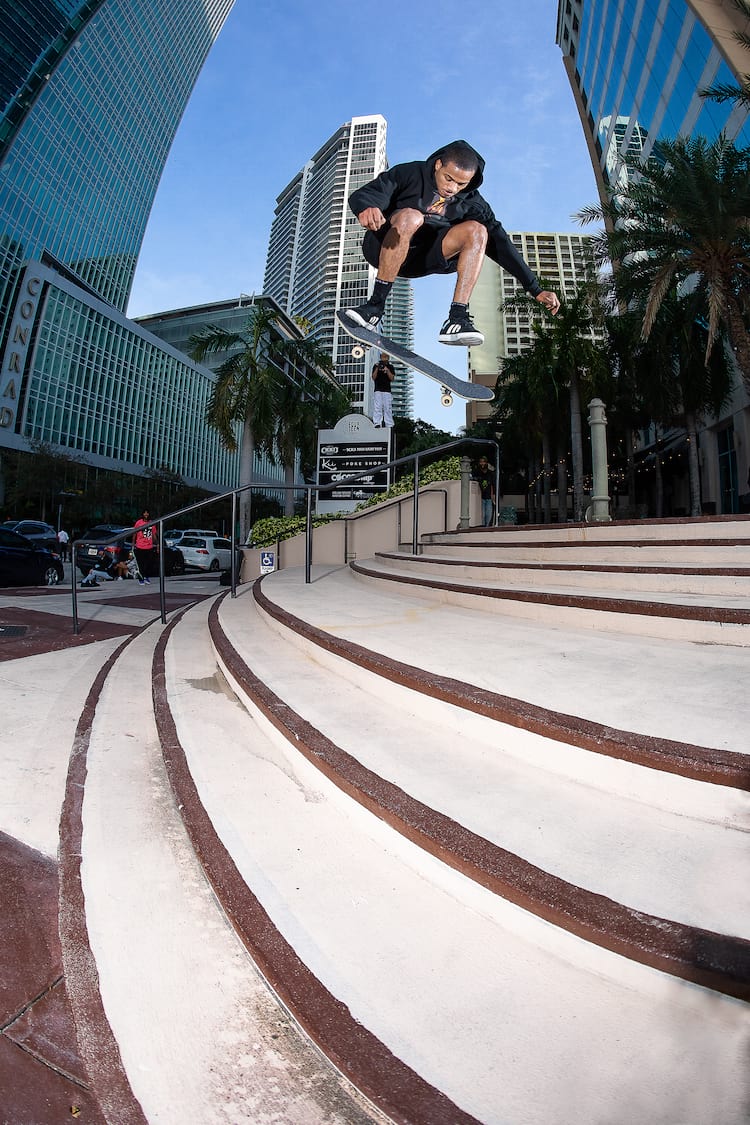 Game respects game, TJ jumped down shit with a fakie heel on his SOTY trip

Would you ever want to skate like that?
I skate how I skate; he skates how he skates. He skates way crazier shit. I’m not about to put my body on the line like that. That’s too scary.

Did you ever think you were going to make it this far?
I always thought about it and kept thinking I was going to get there one day, but I didn’t think it was going to happen as fast as it did. I’m only 21. I knew if I worked hard I would get it eventually and I worked hard. I’m not saying I deserve it either, but if I put the time in and my mind to it, I could do it. I just didn’t know when it would ever happen.

Shout something out.
Shout out Hardie’s gang, shout out to Thrasher and Tony V—the big boss, Jake Phelps, rest in peace. Shout out to my mom, Taste So Good, my dogs, Lui, Na-Kel, KB, all the homies, special shout out to Lamborghini because they make the hottest cars, Benjamin Franklin. I want all of this in the mag, too. Shout out God, adidas, Supreme, everyone at Deluxe, Jim Thiebaud, Mikey Alfred, all the gang. Shout out to everyone. Thank you. 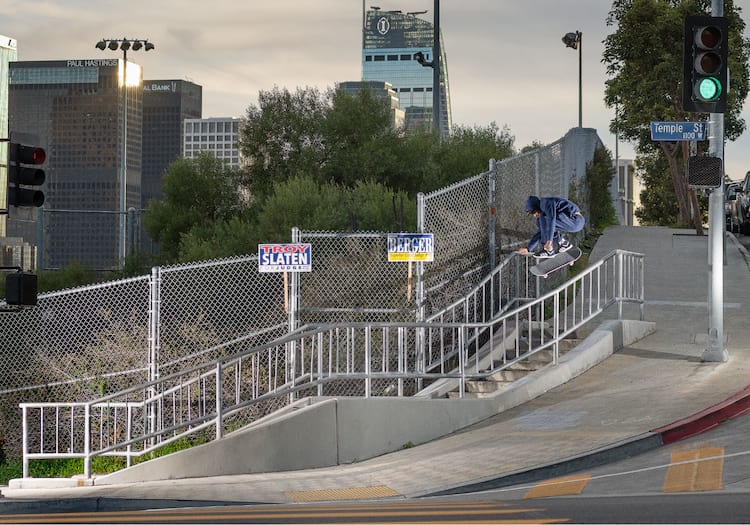