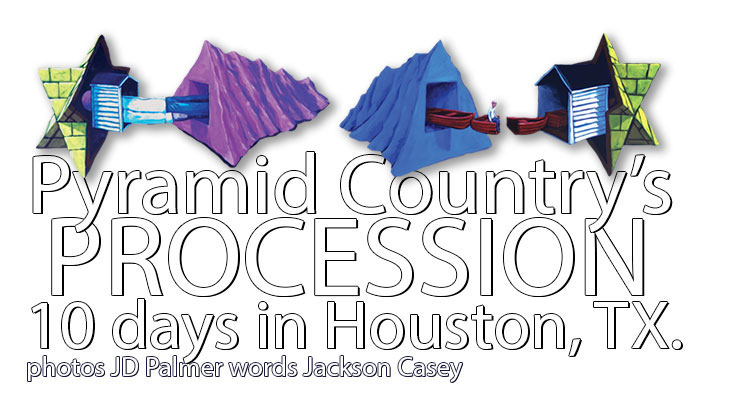 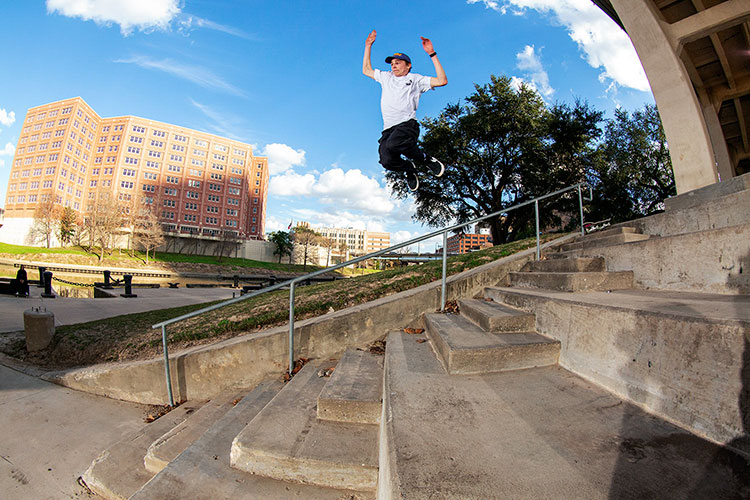 Aaron Goure just flying through the air at Bayou Blocks. He got taken out prematurely from trying to ollie this over and over. Unfortunately for Goure, the run-up won the battle. Peep the slams in the edit

Houston, we spent a year there in one week. Well, a year in ten days to be exact. Houston, Texas, was a shocker to the majority of us, since many of us aren’t very geographically sophisticated. Let me explain: When you think Texas, you think cowboys, guns, dirt, big skies, cows, farms and whatever other honky-tonk shit you’d like. Houston is none of that. Located on the Gulf of Mexico, with much of the city built on marshes and swamps, this place is very different from the rest of Texas. The city is fucking massive. It’s the fourth largest city in the US, coming in just behind Chicago. I don’t know why that isn’t more well known, or maybe it is and us Phoenix folk are just fried as hell—maybe a little bit of both. But it’s probably the latter.

Either way, we had a great time in Space City, even though our first night there we got in two car accidents. It was hectic shit and a story for another time, surely. Many thanks to Select skateshop, Eric Nguyen, the Screwston homies, and Thrasher for making it happen. Eighteen deep in a four-bedroom AirBnB is guaranteed great times. This was our first time having two bathrooms for the boys too. On a skate trip, more bathrooms is greater than more bedrooms. Keep that in mind. We will too. Also, figure out when trash day is or else your house will become a fucking landfill. Houston, we have a drinking problem. Over and out. —Jackson Casey 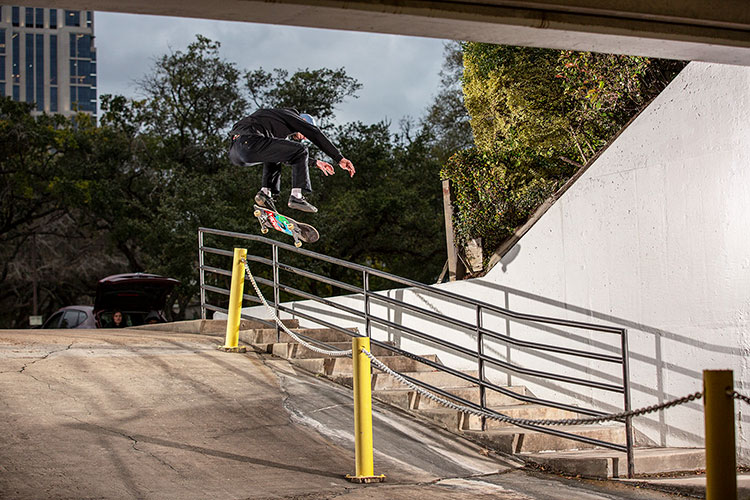 Keegan McCutchen handles everything with ease, at least he makes it look easy. Maybe in his mind everything he does is hard as fuck. Who knows? You pull it off though, Keg! Alley-oop backside flip 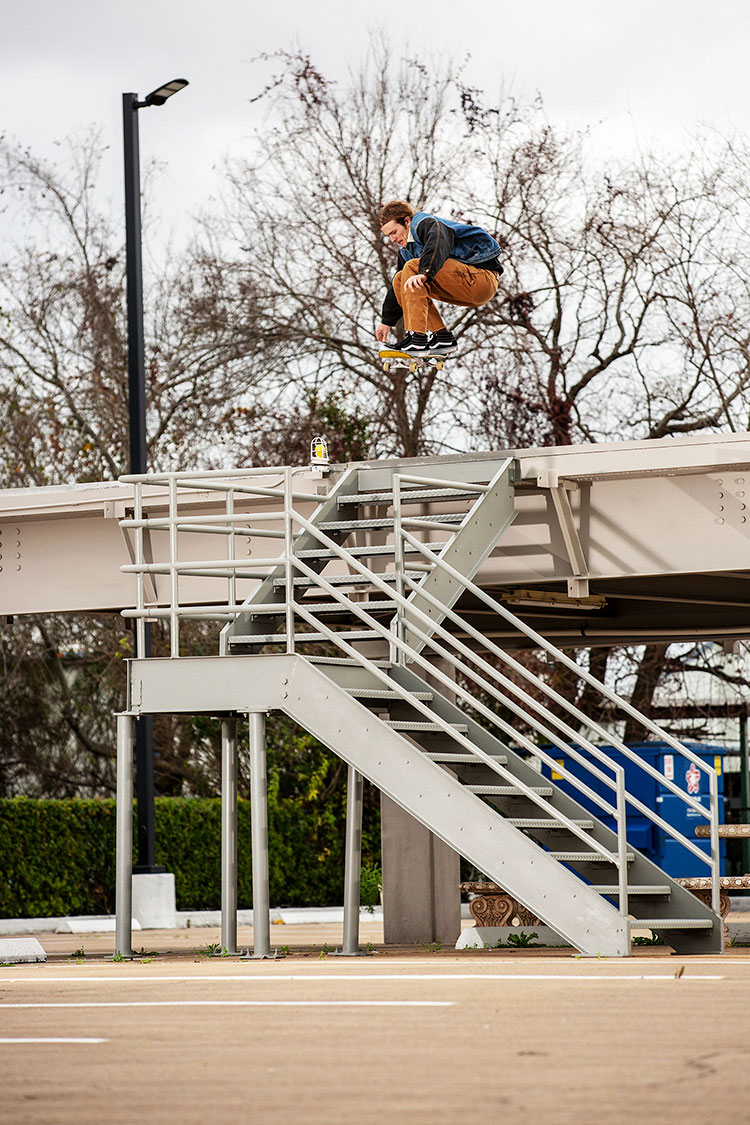 We pulled up to this old piece of shit defunct helipad and thought, Why the fuck are we here, first spot of the day? Klay Anderson said, “I’m not sure. I just really want to get a clip in this jacket.” So he did get it, second try. Afterward, we bounced outta there like a fuckin’ Apache helicopter. Mondo ollie. 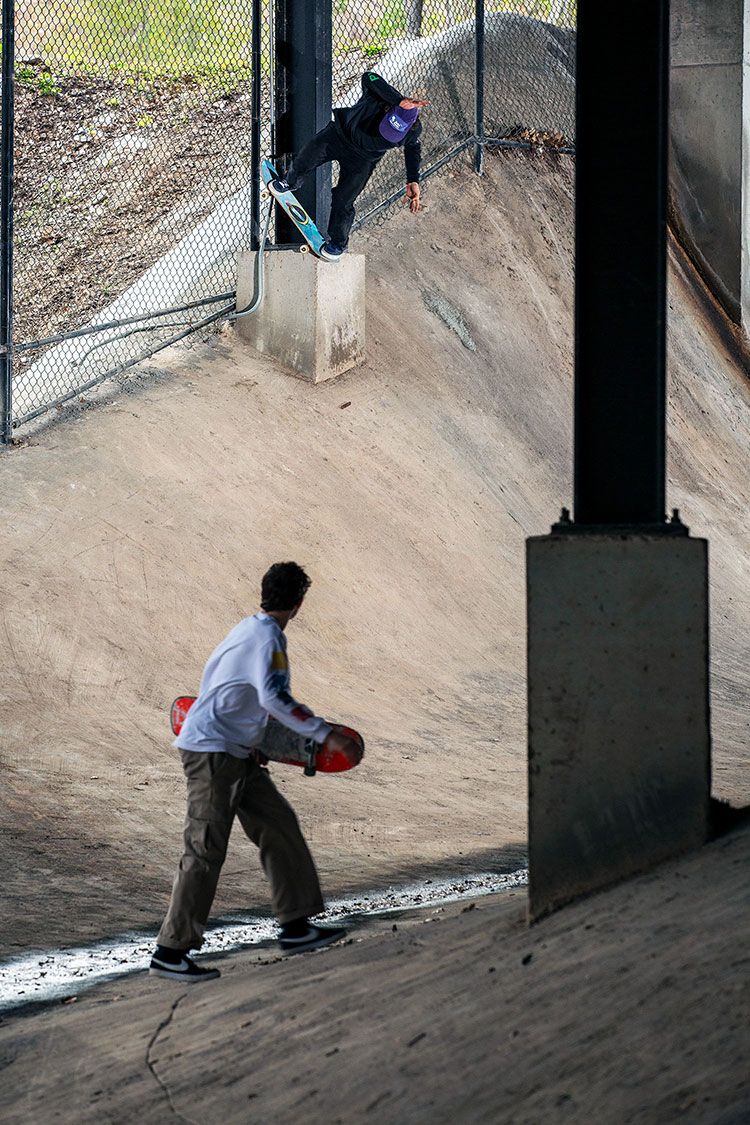 This ridiculous-ass skate spot was beneath a Starbucks. They didn’t give a shit and I think our squad, total, probably gave their bathroom at least 12 shits that day. Tyler Franz, backside blunt. 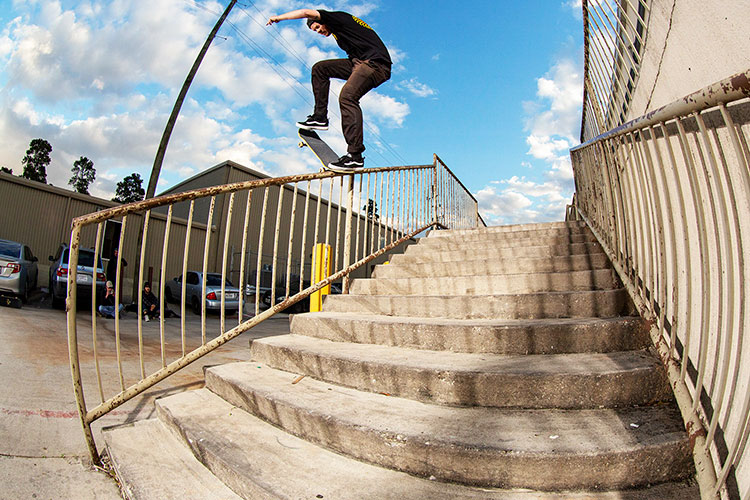 We pulled up to a Pizza Hut, for who the fuck knows why, and this perfect rail with hella uphill run-up was behind it. We skated it while the employees watched and cheered along. It was a fun session before the rainfall. Jack Olson, noseblunt. 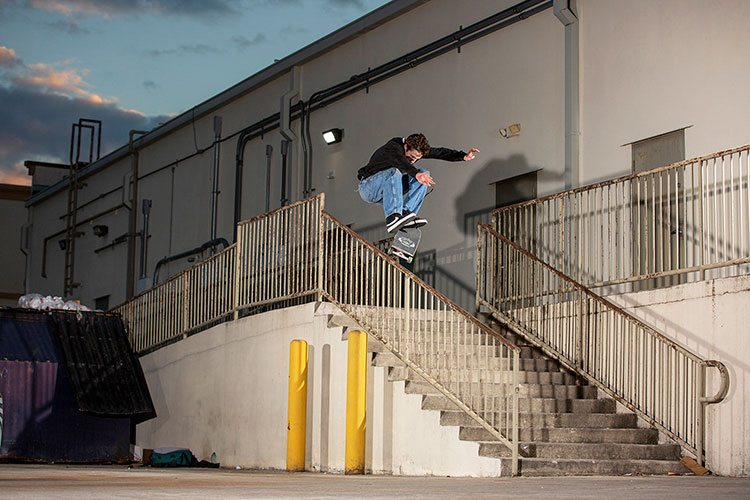 Aaron Goure, kickflip over the rail with the sweet smell of dumpster pizza wafting through the air 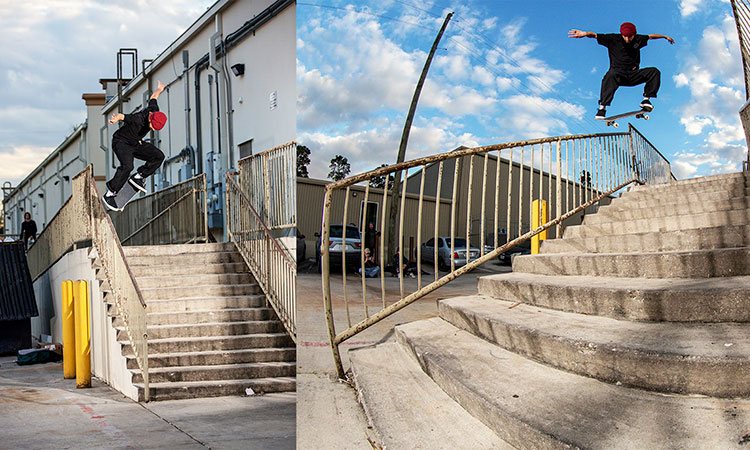 Kevin Braun got his back with the nollie crooked grind 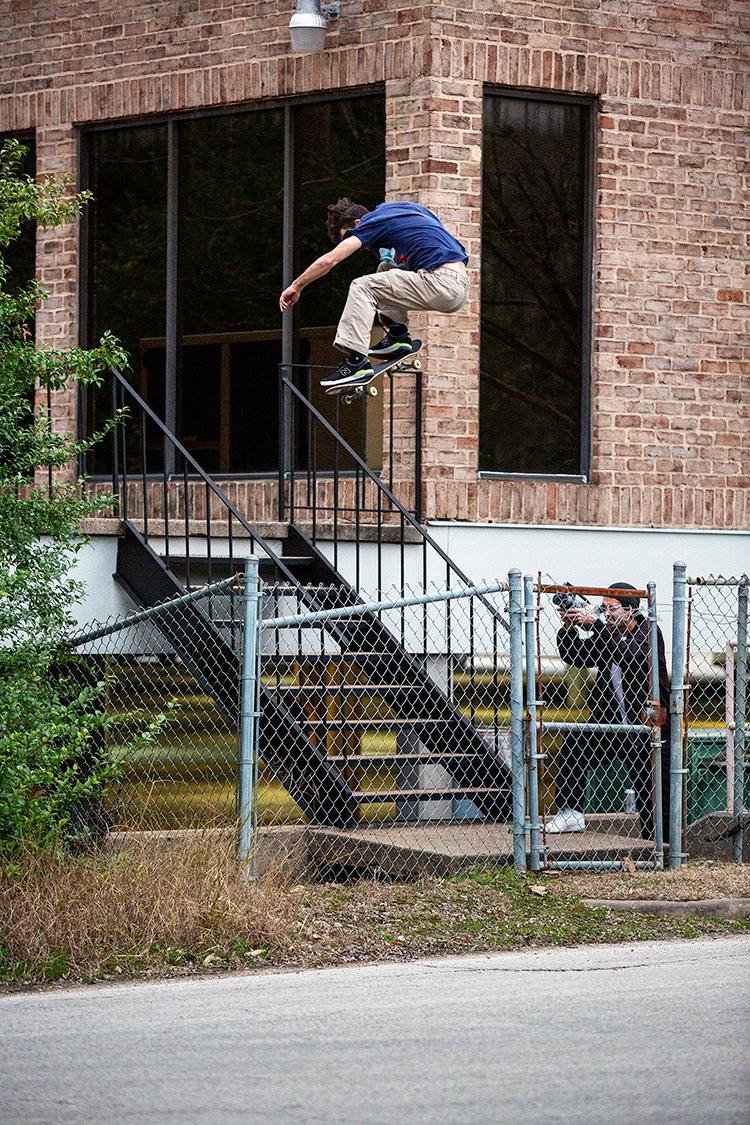 This gap is no joke. I’ve only ever seen The Boss frontside flip it, so Ben Havran’s backside 180 is perfect. You don’t often get away such a simple move these days, but if Reynolds frontside flipped it, a back 180 says a lot. 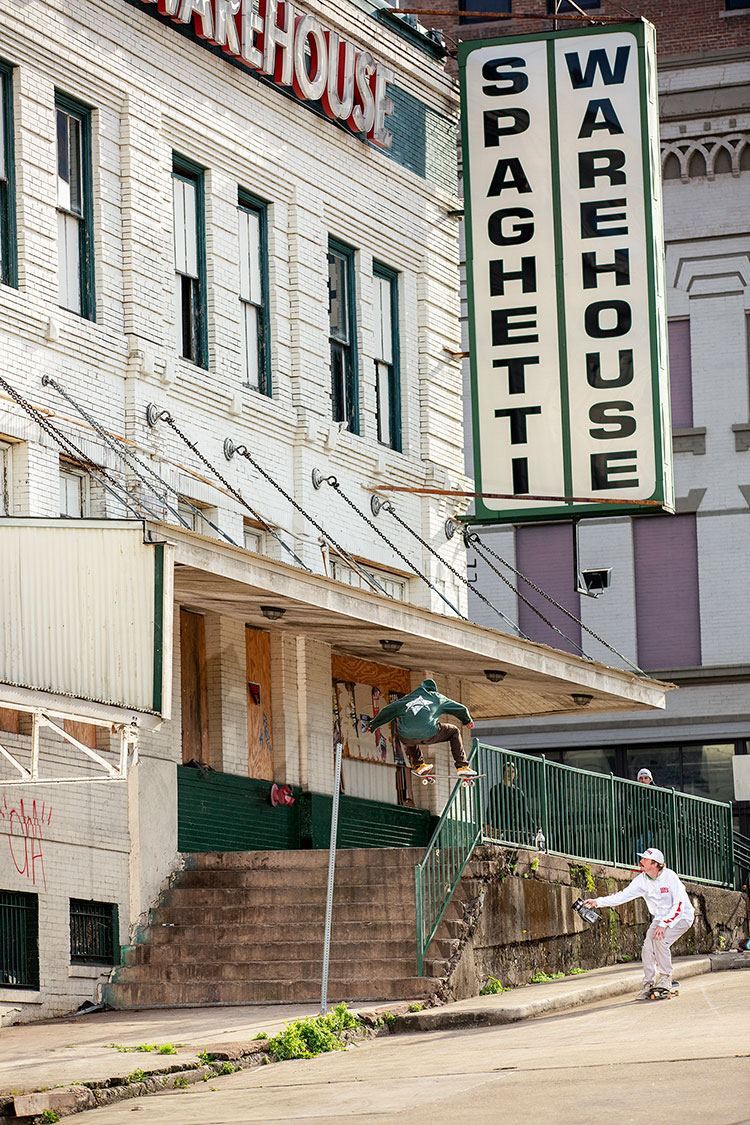 Blue Headey handled this switch backside 180 to the street. He hung up once and I kneed him in the back of the head so hard while filming, but that didn’t deter him from making this one happen 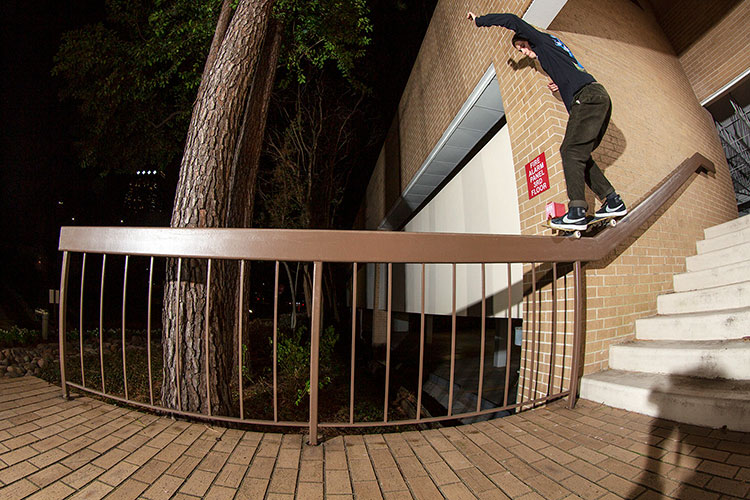 We were trying to find a different spot while also getting a firewire cable because I’m a fried asshole and I left mine in Phoenix. On the way home, we came across this thing. Minutes later, Eric Clark handled this 50-50 to the end and also got a 50-50 180 out, no problem 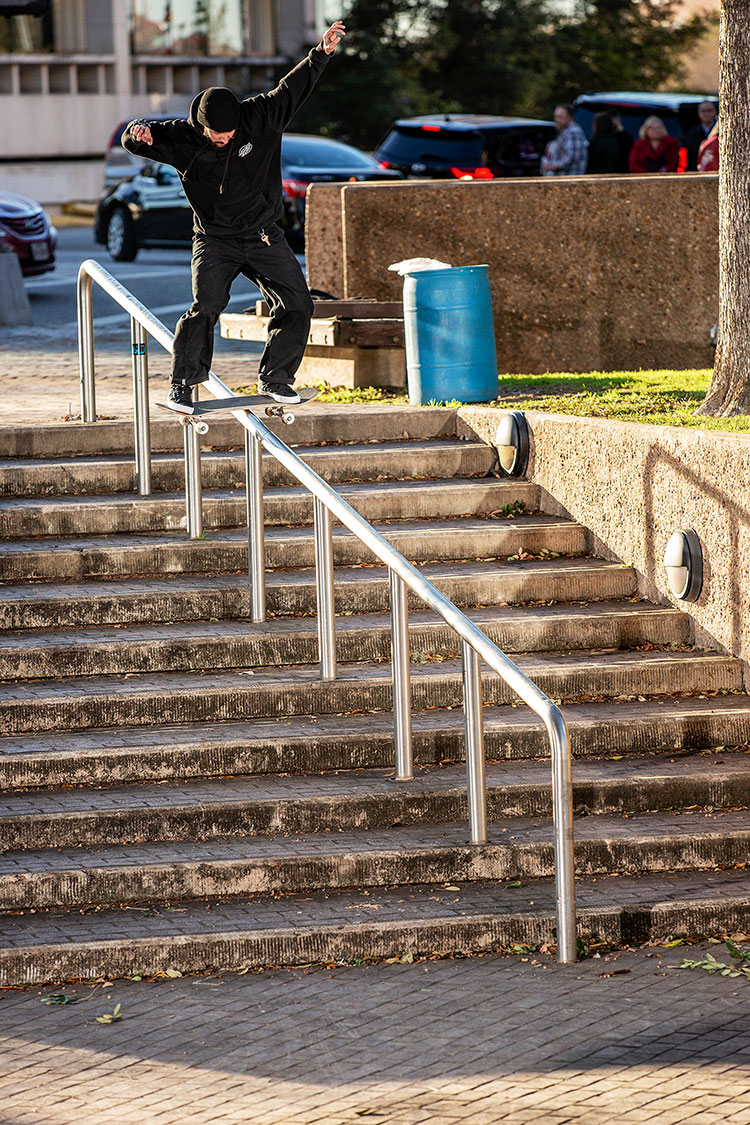 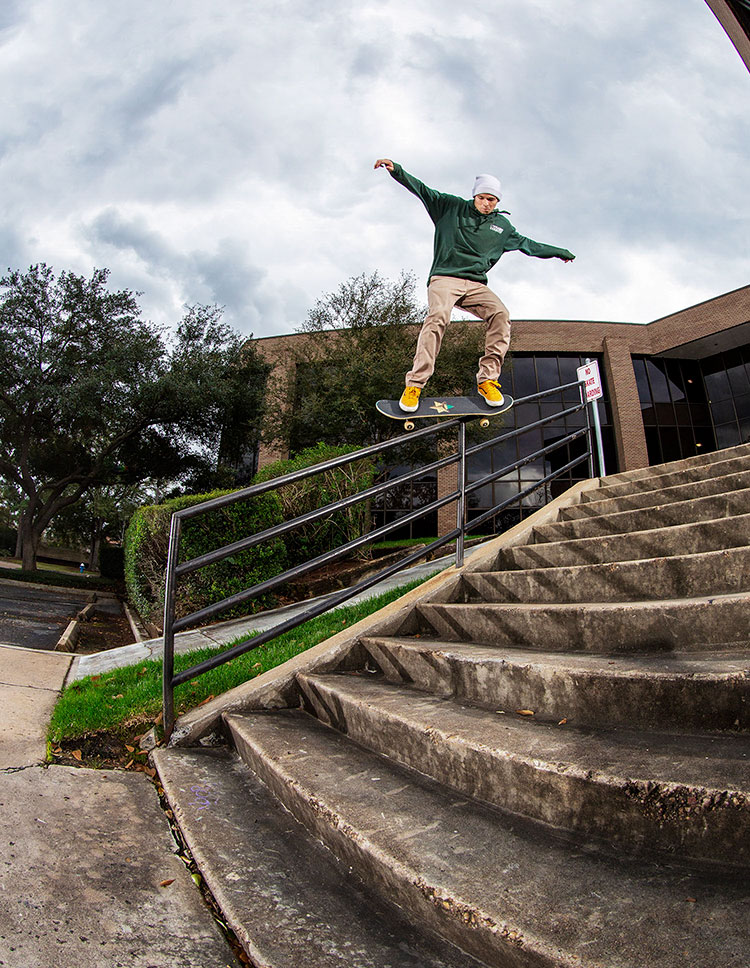 There’s always that one spot on every trip that’s just such a great time and everyone is doing amazing shit in every direction you look. For us, it was this spot on this particular Sunday near the end of the mission. It was such a fun session. I’m sure you’ve had such times with your friends too. Blue Headey’s switch feeble was just one of the awesome tricks that went down 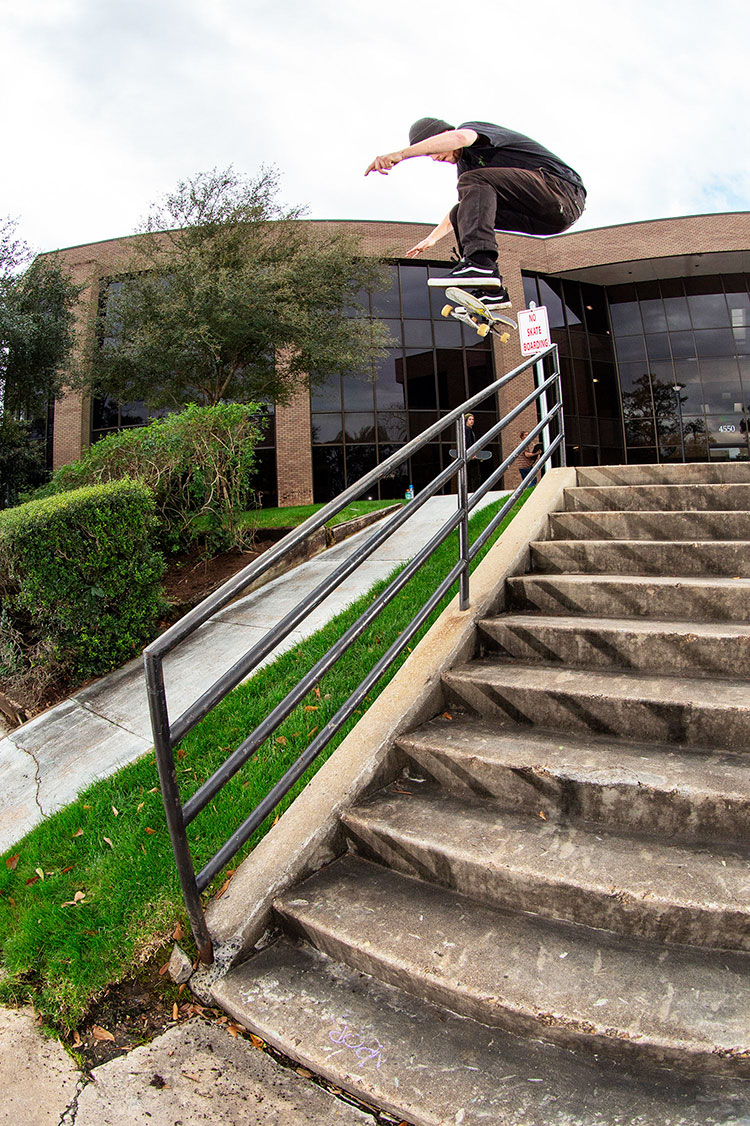 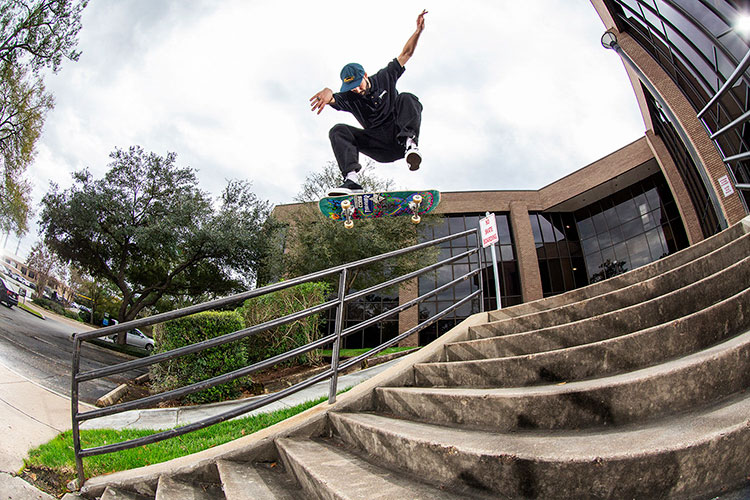 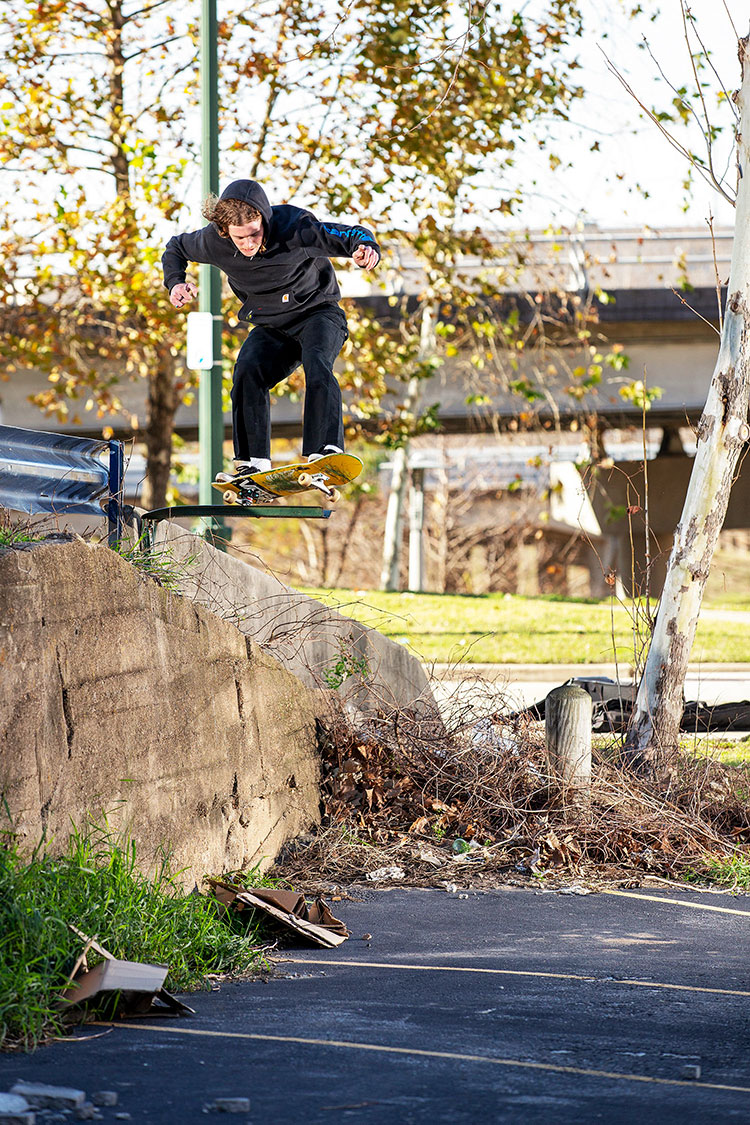 We found this weird jammer between two spots and the boys got theirs. It was a finicky one, but in the end the guys won their battles Klay Andersen, 5-0… 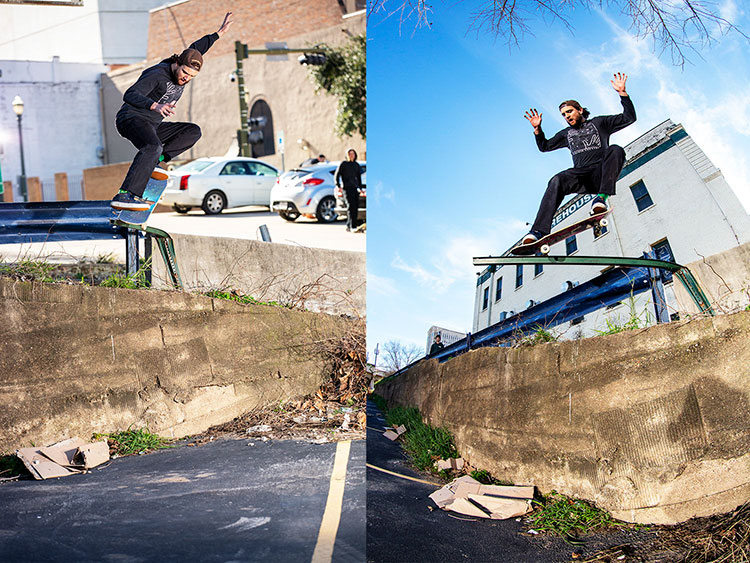 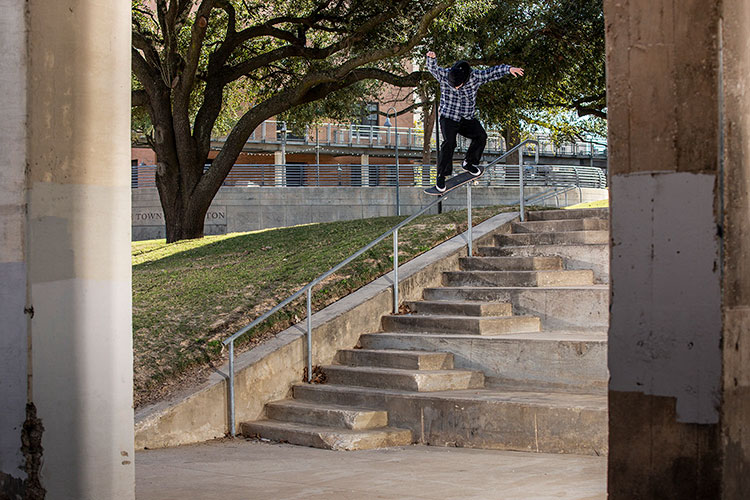 This rail is insane. You gotta pop out at the end to avoid going to grind, like a few have done on the rail up top. I don’t think it’s possible on the big one, though, but I’ve got a box of Pyramid Country shit for someone if they do it. Either way, Kevin already gets boxes and didn’t have to go to grind—so sick! Exeter was there, too. Check it out in the video. K-Braun, feeble pop out 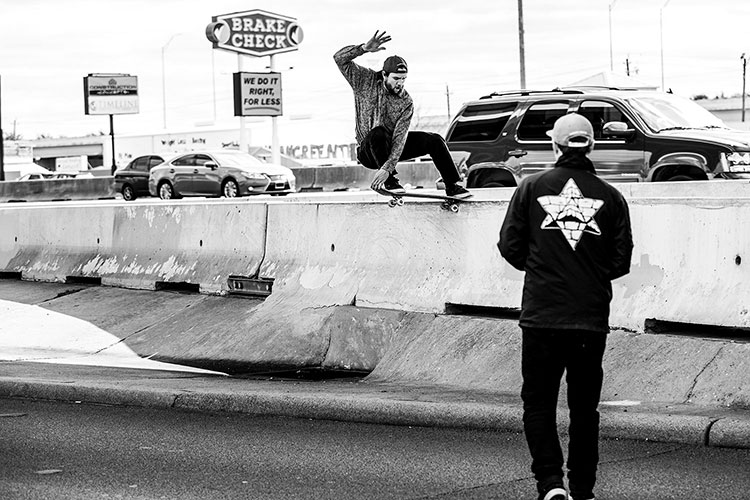 This barrier between two freeways was so hectic—much anxiety for the boys. Lots of tricks went down before the po-po came through. Worth it! Careful in the streets! Tyler Franz slides a crail while JJ Horner watches for traffic 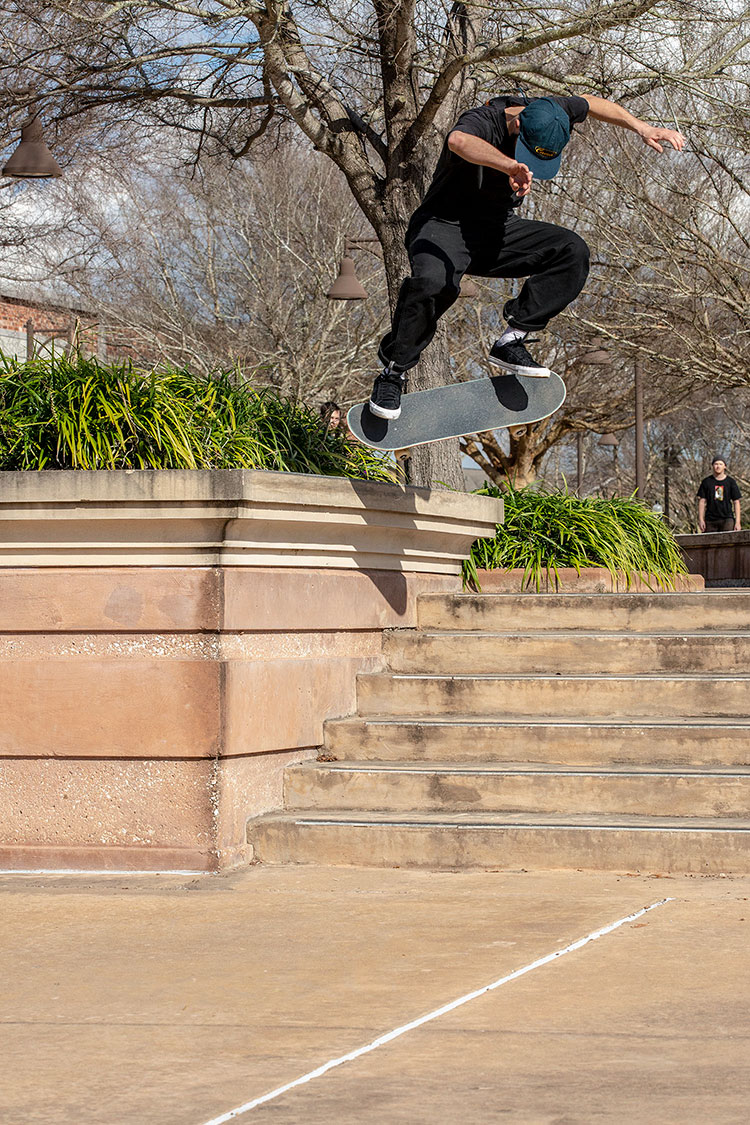 Maybe the best spot ever, sans the semi-weird run-up. Braun rolled away from what might be the best trick done there, a nollie flip crooked grind. It was so insane to witness. Our boy Pete Grannis talked security into letting us skate by saying his classic, “We’ll leave the spot cleaner than when we got here.” It works every time for Pete. Good work, Braun. Good job, Pete 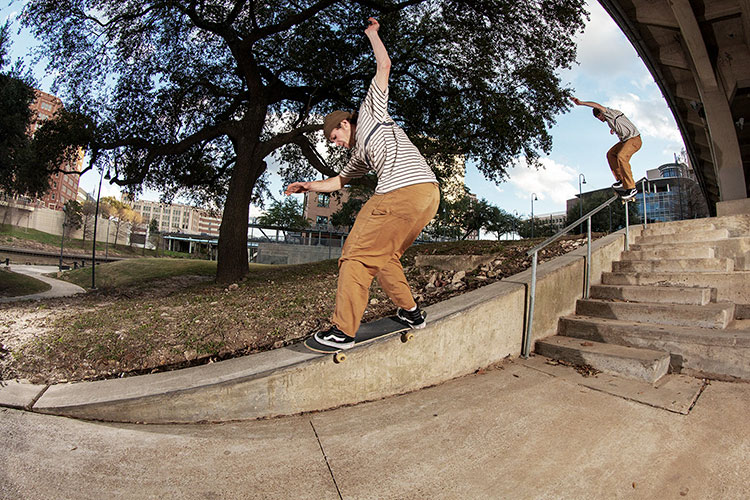 This was one of the illest battles I’ve ever witnessed. Klay destroyed his palm for this one and right after he rode away with the make, we partied our asses off—right there at the spot! He threw sparks when he hit that 50-50! Smith to double truck.

We love you all. Thanks so much for keeping up with us all these years and for tuning in now! ’Til next time!