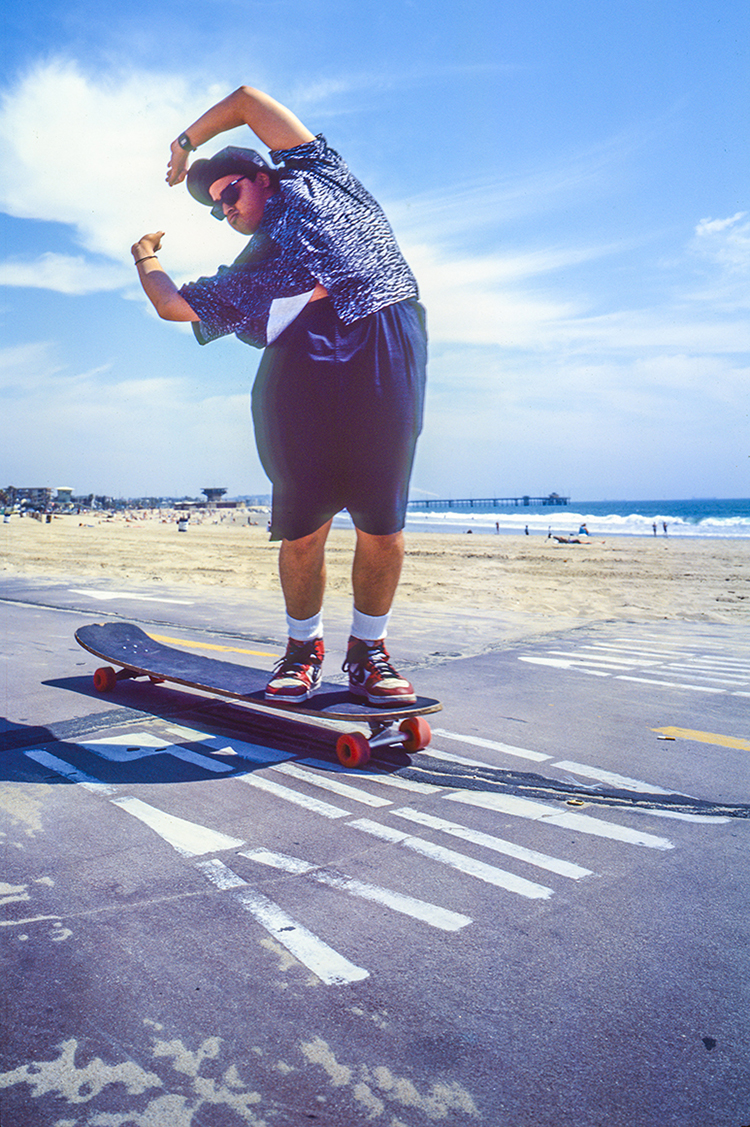 "From when I can remember meeting Gerry "Skatemaster Tate" Hurtado … the hustle was on. Working every skatepark basically in the Orange County area in the late 70's – from Skatopia, Paramount, Big-O and Skate City, Taters was always smiling and trying to appease most everyone, or at least trying to pretend to be. He was always looking for what was new and happening, whether it be skate gear, music, clothing, or whatever else seemed important in the skate scene, or close to it. Taters loved life and the people he was friends with and met along the way. Always willing to help, whether it be putting Lance Mountain on Indy or giving the little kid on the street a skateboard,  'cause that's the way Taters was. One of the first team mangers for Independent Trucks, he was responsible for helping and making things happen in skateboarding through his love and devotion to the sport that he gave so much energy and passion to. Don't forget SKATE T.V.! Tates loved his music as much as skateboarding. Skatemaster Tate and his Concrete Crew was one of his first music projects. DJing was another love for Taters, along with searching thrift stores and record stores, all with a smile on his face, and a "whattaya-got,-maybe-we-can-trade-something-for-that" approach to life. To end this is not easy. I could go on and on, but won't. Taters will be missed by a lot of people – more than you could imagine. He was a good friend to so many. That is obvious. For me, there will never be another SKATEMASTER TATE. As they say, the mold was broke one day at Ermico – I don't remember if it was Fausto or Swenson.... but one of them. Gerry will be missed a lot. Live life to the fullest and never look back. Taters would tell you the same thing. One last thing: Taters loved his Mom and family." 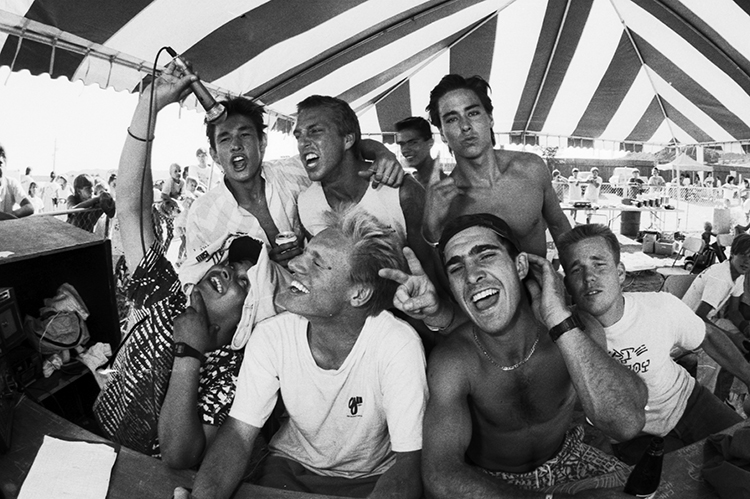 Hyping the bros at the Streetstyle in Tempe contest. Photo: Chuck Katz 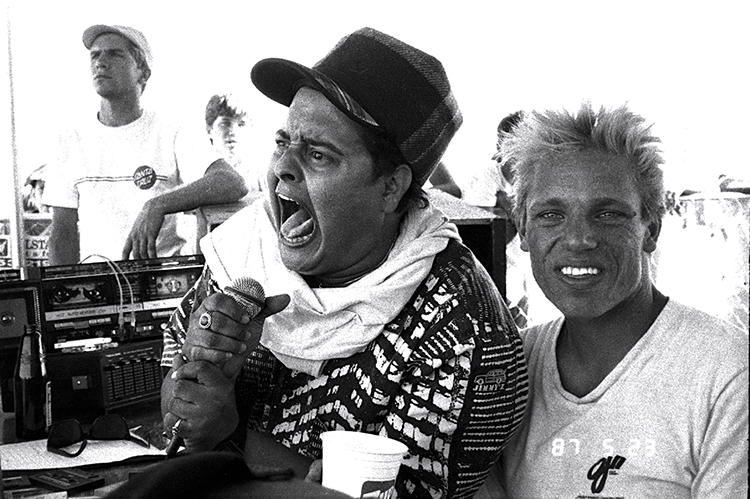 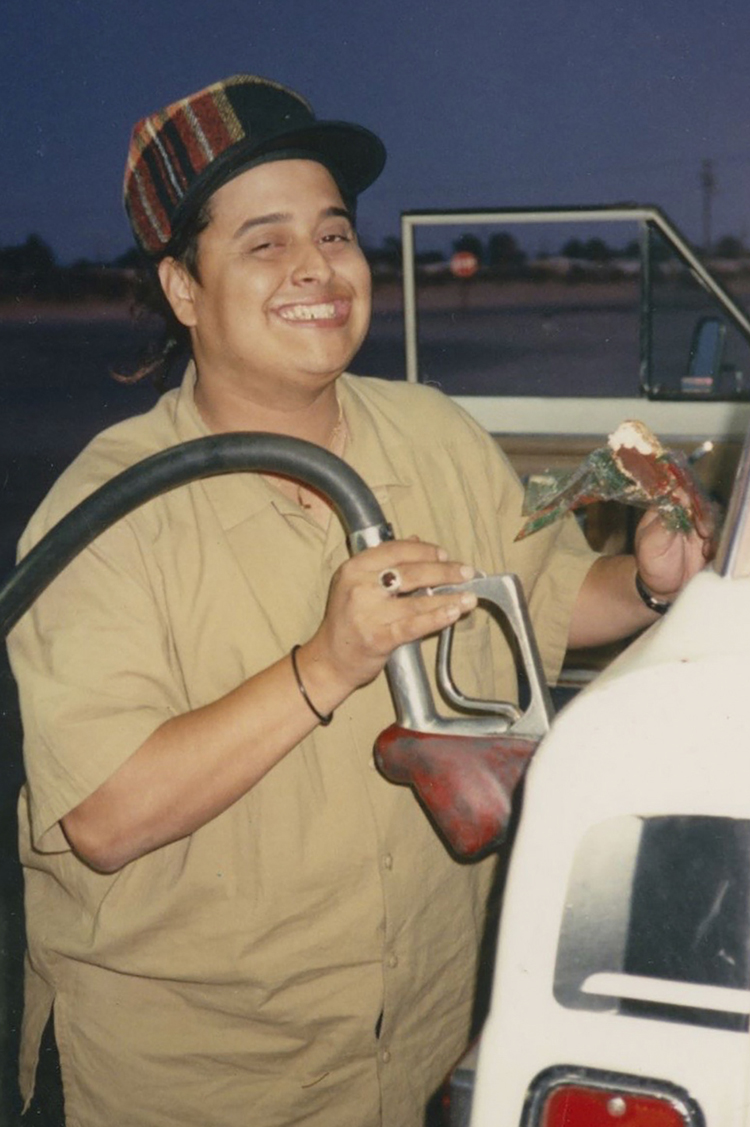 Road doggin' in the '90s. If there was an event, Gerry would be there. Photo: Chuck Katz 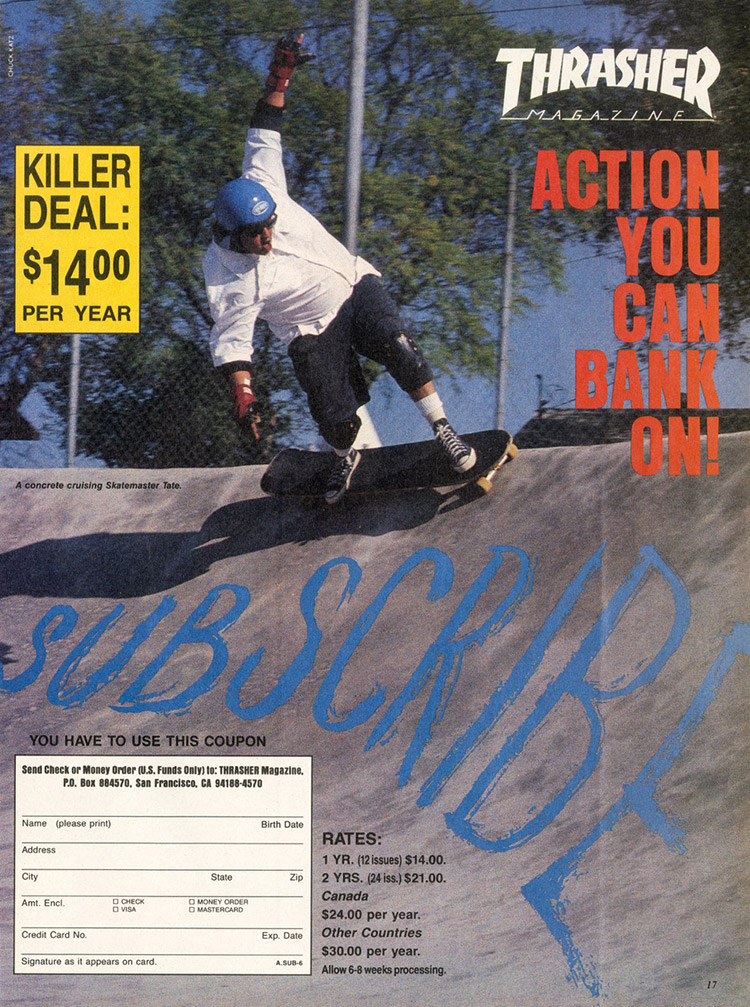 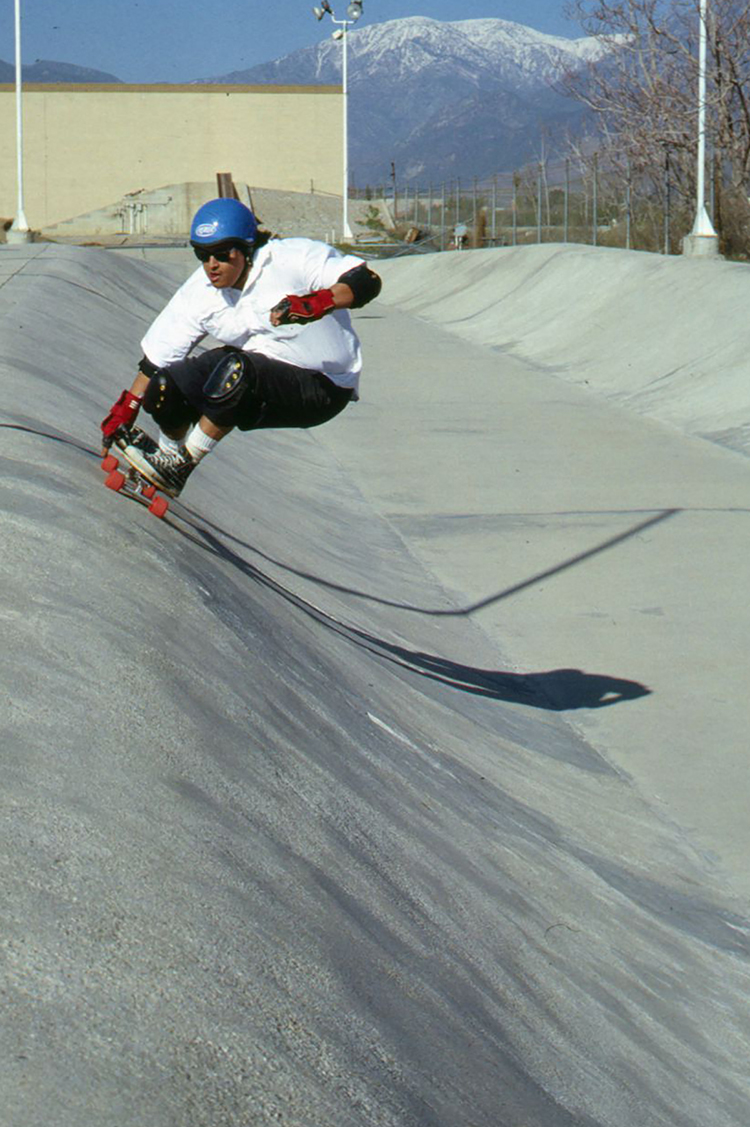 A longtime slalom enthusiast, he dreamed of creating a modern event for the kids of LA.  Photo: Chuck Katz

Taters introduced skateboarding to a generation of kids as the host of the sometimes-goofy Sk8 TV show on Nickelodeon. 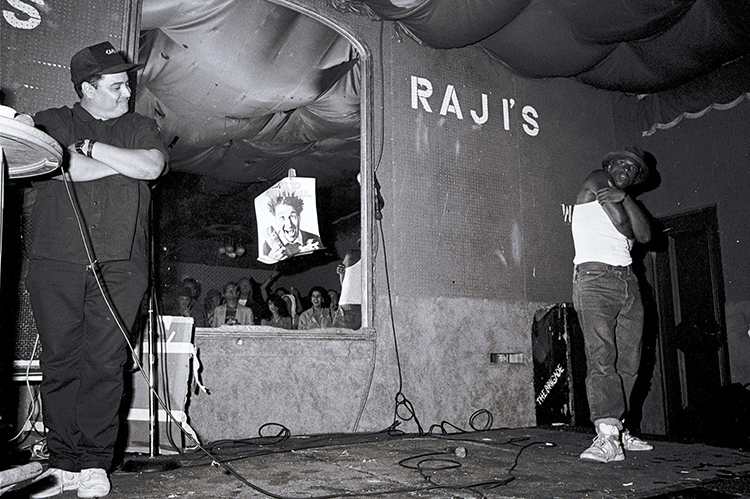 On stage with Kid Cav in 1989.  Photo: Chuck Katz
His most beloved song appeared in the Public Domain video for Doug Smith's part. 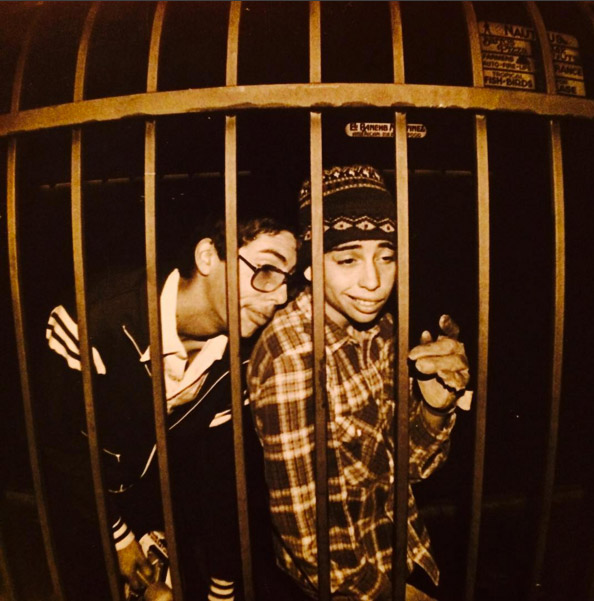 Lucero and Armijo locked out of the park … until Taters set them free! 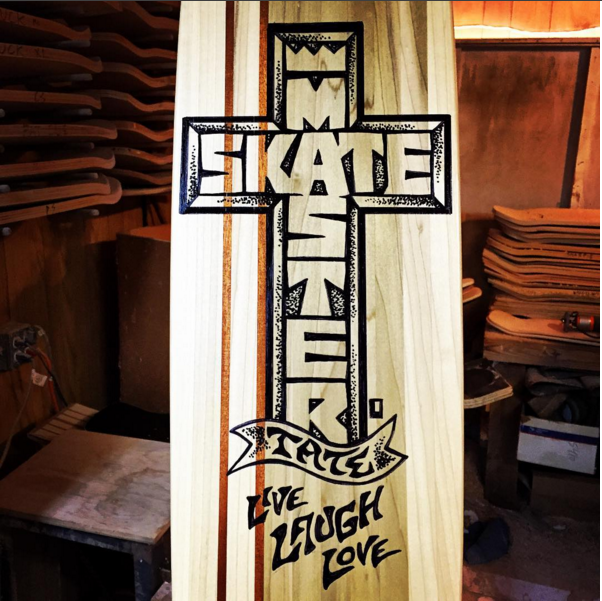 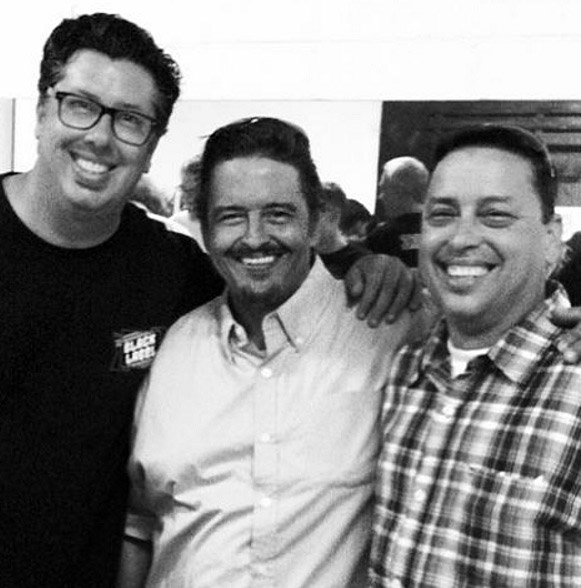 Lucero, Taters and Richard Armijo, back together.

"In 1981 I was kicked out of my local skate park! Banned for life for being obnoxious and terrorizing. We took to the vacant parking lot and thrashed the curbs all day and night! Tiles and coping is what we wanted, not rules! During that time, Gerry Hurtado was hired on to manage the park and build a new team. We weren't allowed in or near the park but Gerry somehow pulled all the strings to not only get us back in the park but we were on the team too! I never had to pay again! It felt like forever that we couldn't skate! That first night back I learned backside alley oop ollies in the clover! One of the best days of my life! Gerry was one of the first people to believe in me. My journey would have been much different without him. Always laughing and always loving! That's Gerry's Way! Thank you Ger, I Love You…" – John Lucero 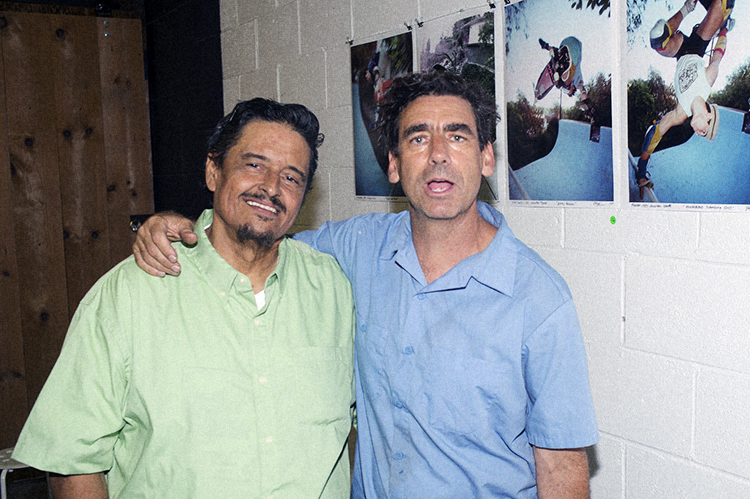 Taters with Lance Mountain in 2015. Though he had his ups and downs, Gerry bounced back in the last two years with a smile and a story for everyone. He spent his last months organizing skate events for kids. Skateboarding will miss you, Skatemaster Tate.
© 1981–2022 High Speed Productions, Inc.