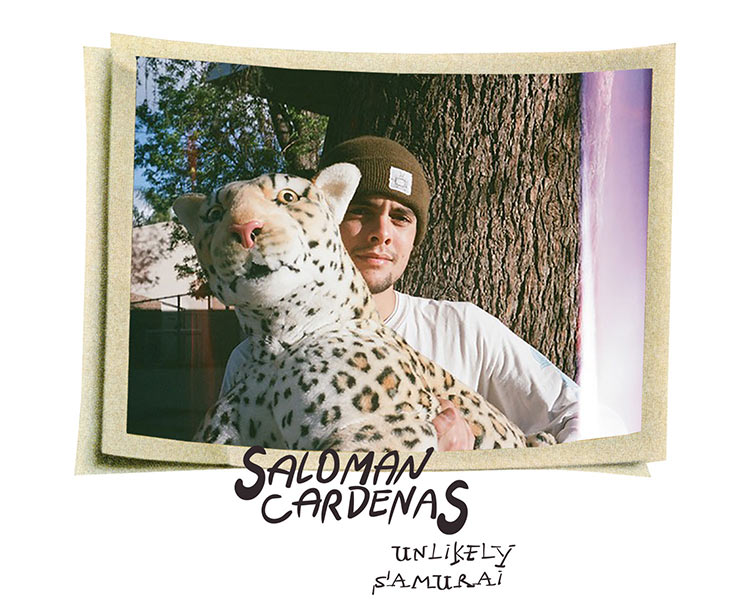 First off, Sully, whats your sign?
I’m a Libra

Are we compatible?
Hard to say. I think Mercury is in retrograde

Let’s get it out of the way: where are you from?
From a small town called Naples, Florida. It's on the west side of Florida, the Gulf Coast—one town away from where Elissa Steamer grew up.

Did you grow up going to Tampa contests?
Yeah, kind of. I guess you could say that. 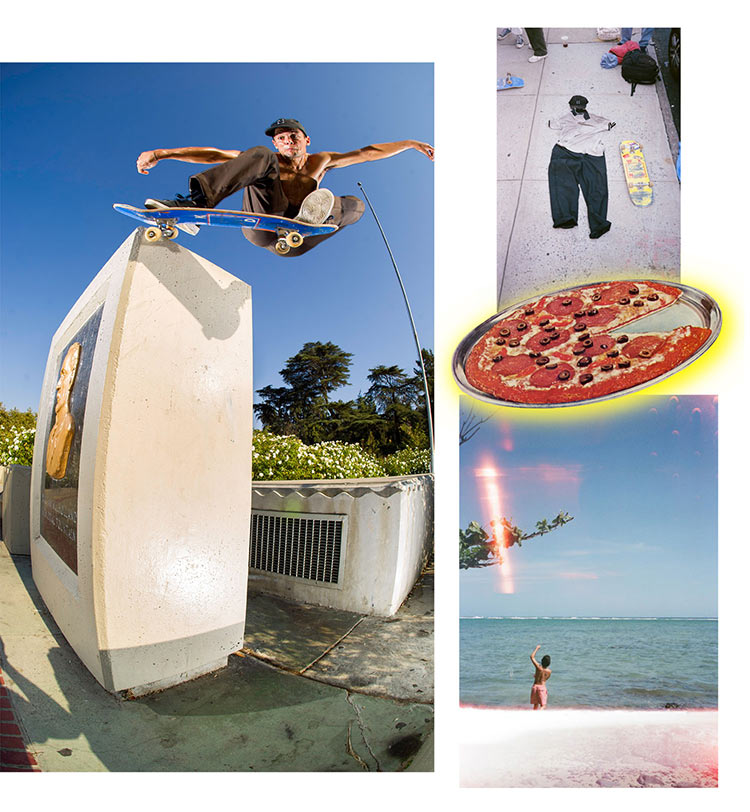 If you wanted to crook it for Fabrizio you should’ve taken your back foot off Photo: Brent O’Donnell/Grant Yansura

What’s your Fabrizio Santos story?
Fabrizio Santos saved my life! I think it was, like, the 2006 Tampa pro weekend. I was at that classic Tampa ten stair that lands into the street, the one where Reynolds nollie noseslid the rail. I had never ollied a ten, so I really had to check that off the list. I was charging at it, I wanted to ollie it for Fabrizio. I ollied it and didn’t see this SUV that was hauling ass. Fabrizio tackled me to the ground. I just remember laying on my back and he’s over me with his dreads in my face and he said, “Dude, you didn’t see the car?! You would have died!” Shout out to Fabrizio; he saved me! It was so sick.

Your Kerry Getz story is a little different than that, right?
Yeah, it was actually that same day. I was at the contest. I was just a little shit. I had this bright-pink shop board. I was walking around getting pros autographs: Corey Duffel, P-Rod, Rob Dydrek, the list goes on. I was so stoked and I go up to Kerry Getz. He was one of my all-time favorites and I asked him to sign my board. When he was signing it I asked if he had any advice on how to go pro one day. I’m 12 at the time, so I feel like that was a pretty reasonable question. Without looking up at me he said, “Honestly, dude, you probably don’t have what it takes. I wouldn’t hold my breath.” Handed my board back and skated away. That’s fucked up to say to a 12 year old! Whatever. Water under the bridge, Kerry! Ha!

How was growing up in a small beach town full of rich retired white people?
It was cool. I was a cabana boy for all of them. I’d sit on the beach all day and just get whatever they wanted for them: beach chairs, cabanas, kayaks, all that. They’d tip me fat so it was worth it.

Any nightmare stories with old rich people?
Damn, this is kind of messed up on my end, but once this family said they dropped a 100-dollar bill and couldn’t find it. Mind you, every single person on this beach is a millionaire so I think they were testing us, an honor code or something like that. I honestly didn’t know what I would do if I found it but I was looking for it. This dude I was working with said if he found it he’d split it with me but if I found it I’d have to do the same. He ended up finding the $100 and gave me $50 from his tips. Robin Hood, if you will. 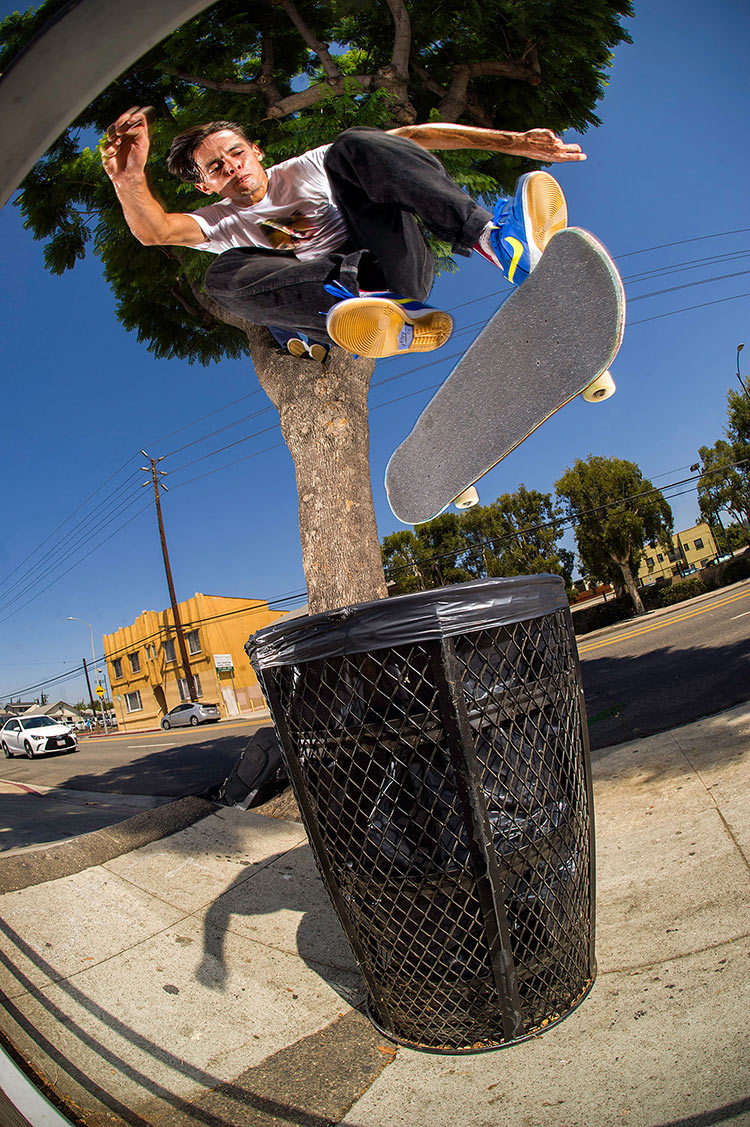 Was it easy to get in trouble in a small town?
I stayed out of trouble for the most part. I got kicked out of field day in second grade 'cause I was showing classmates my wiener under the desk. A game of “you show me yours. I’ll show you mine.” You couldn’t take pics then or send texts so…

Where did your love for ninja swords and other weaponry come from?
They’re not ninja swords. Are you referring to a Japanese samurai katana?

Yeah, sure.
I’m not sure. I’ve always just been into Medieval weaponry. Lord of the Rings probably helped a lot when I was a kid. My mom was really supportive of it. She would help me research them online and pick them out. She got really into it as well. I have a ton of cutlery and weaponry in this storage unit in Naples.

You’re probably on some watch list. How many Japanese swords do you own?
I have a bunch of other swords but only have one katana, the one in my room right now. My first sword was this little sword, kind of like a dagger but I remember being stoked on it 'cause the handle has this naked mermaid on it. I remember being surprised that my mom let me get away with that one. 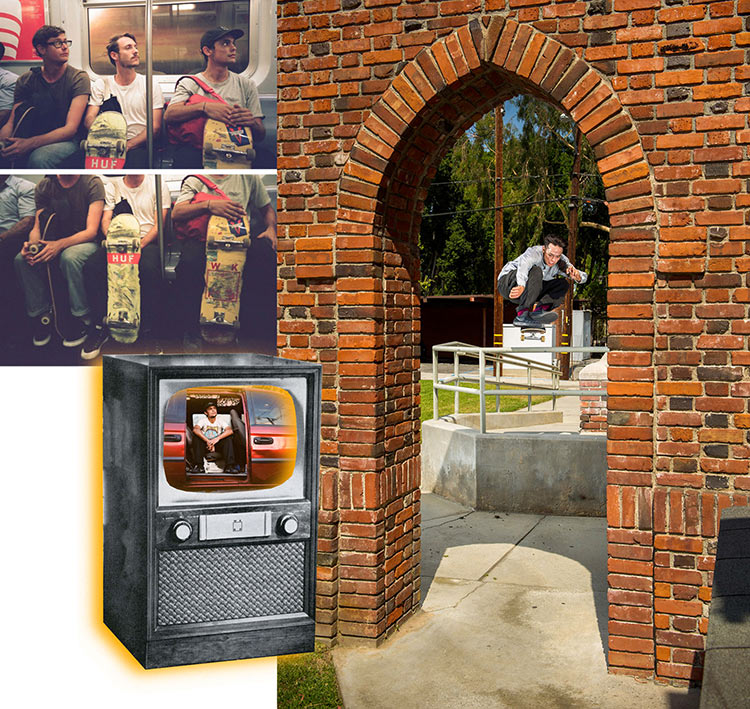 What’s your favorite war?
That’s a strange question, but WWII, for sure. When I was younger I was always really interested in the history of WWII and everything that came in to play that started it. I’m into it from a historical point of view, but I really don’t back the act of war. You’re gonna make me sound like weirdo with these questions!

Okay, my bad. How’d you lose part of your testis while filming this part?
Oh geez. Well, I wasn’t filming when that happened. It was at a damn skatepark. I tré flipped some stairs at a skatepark and I must have been looking down at how perfect my feet landed on the bolts cause when I looked up there was a wall. I took my back foot off real quick and it snapped up so hard, right to my guys. I can’t even describe the pain. I almost went black. I woke up that night at like 4am with something going on in my lower abdomen. Andrew Considine was staying at my place so I woke him up and asked him to take me to the hospital. At the hospital they did an ultrasound and the doctor knew I did it skating so maybe he was trying to sound cool but his words were, “Dude, you cracked your nut!” The doctor said that. I broke off a third of it, so they had to take me into surgery to remove it. The doc was watching my footage on YouTube while I’m waiting to go into surgery. It was cool, but, like, "C’mon, I’m dying here, doc." I’m all good now, though. It didn’t have any long-term affects.

Nothing?
I think I have more pop now. 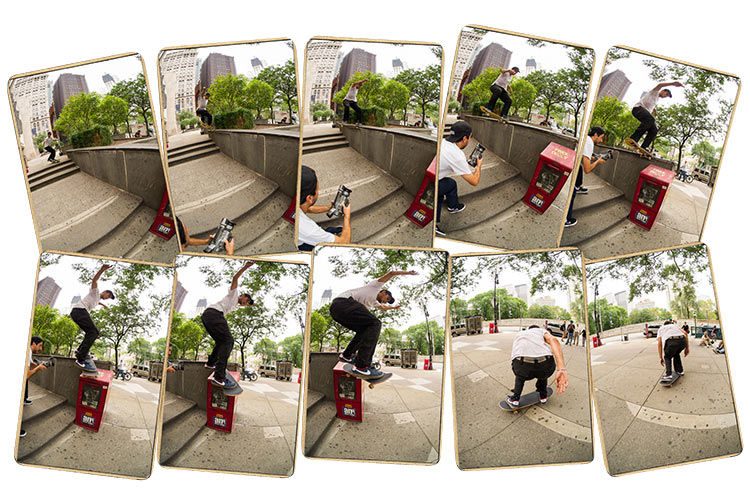 While all eyes are on the news, Sully puts all four on it. Tailslide drop in Photo: Brent O’Donnell

But your balls are smaller than before.
Yeah, but less weight! Less drag, more aerodynamics!

You were at Johan’s roast the same night of your surgery…
Oh yeah! Straight from surgery. I was still coming down from the morphine and meds they gave me and I had all these bandages and shit going on down there, but I just threw on some clothes and asked Andrew to give me another ride, straight to the roast. I was sitting there out of it but couldn’t miss that.

I remember being on the stage and spotting you. I couldn’t believe you made it! Thinking back, I feel like you were sitting there, eyes half closed with a big bag of ice on your nuts.
Ha! No, that’s in your head. I didn’t have a bag of ice but I definitely had a bulge of bandages down there.

So you left college to move out here to Los Angeles. Was that a hard decision?
At first, yeah, but I just couldn’t do it anymore. I was living in Tallahassee for three years and it was a really fun place but I felt like I wasn’t being productive. Probably sounds wack or arrogant, but I didn’t feel like school was challenging me in the way I wanted. I wasn’t skating as much because I was in class and of course it’s easy to party so it didn’t feel productive. I had to bounce. 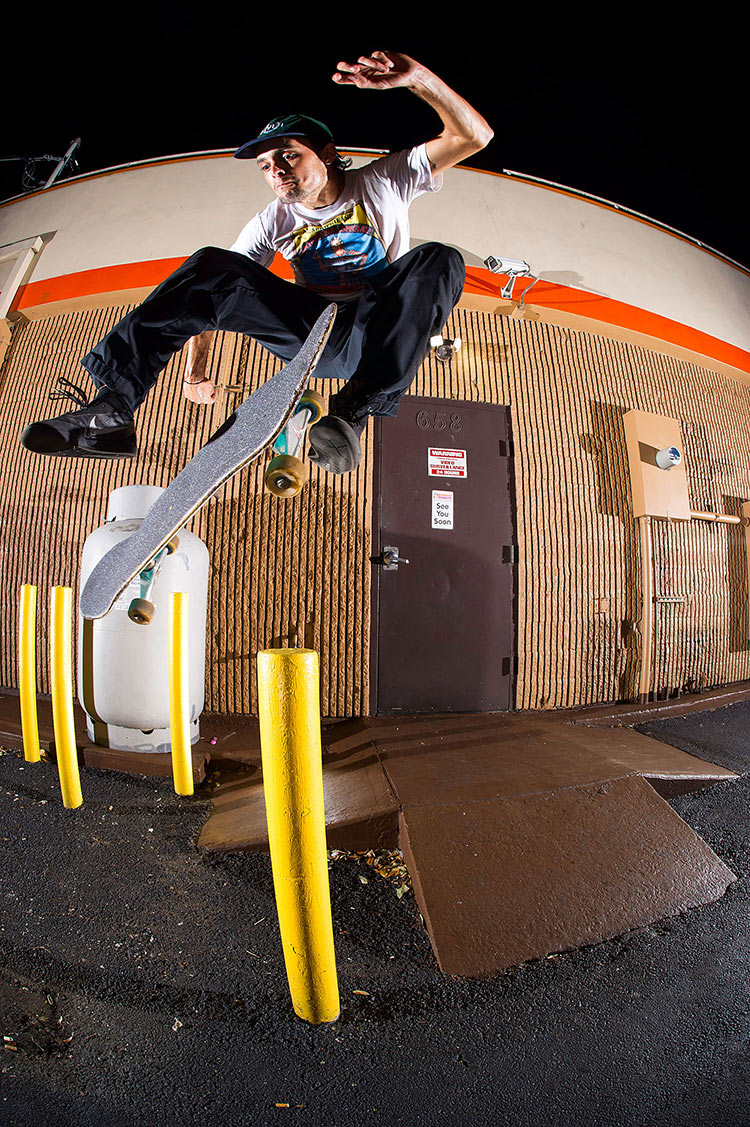 A more aerodynamic 360 flip up and over the pole. Look out for walls ahead Photo: Brent O’Donnell

You interned for us last summer. How was that? You had to have an internship for school, right?
Yeah, I got credits for that! It was pretty much a skate trip; it was great. You guys really did put me to work, though. I took over all the shipping for, like, two weeks when you guys were on a trip. All the orders got fucked up. Nah, I was on top of it.

You’re rather new to Los Angeles. You were doing Lyft and now you’re a pizza-delivery boy by night.
Nope, I’m a pizza-delivery man! I needed more structure than Lyft. Also, I kept having to pee in the middle of long rides and it would stress me out. I have an active bladder, I guess. It got me into a few weird situations.

Go on…
One time I was in downtown LA at the height of rush hour. Standstill traffic and I was driving a carpool Lyft ride. So, all three of us are strangers and I had to pee so bad. It got to that point where I couldn’t hold it so I just got out. We weren’t even at a light or anything, just the middle of traffic. I got out of my car, ran over to the side of this building, not even hidden or anything and just released. Got back in the car sweating, but they didn’t say anything. When I retired I still had five stars, though.

We live together and I’ve caught you sleep walking a few times. What’s your furthest distance?
Once at summer camp, I slept walked into the pitch-black woods at night and got tangled in vines. That shit was straight up terrifying. I was all scratched up. I woke up and had no idea where I was. It was pitch black and freezing cold out. That was the most scared I’ve ever been. 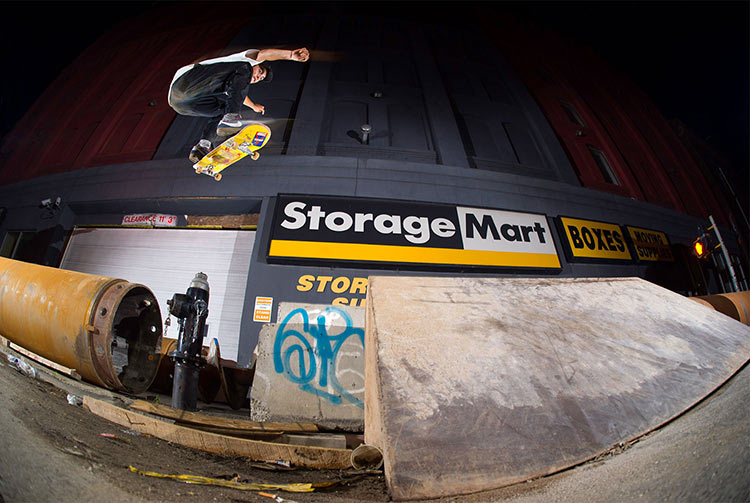 Wow. I caught you trying to take a piss in the hallway closet once. We just got back from a trip to Paris and your mom and dad were actually on the trip in a way. What was up with that?
My parents have never been to Europe so when I told my mom we were going she kind of just jumped on it. I didn’t really know they were going and she just sent me her itinerary out of nowhere for the same dates.

Were you stressed that they might pressure you into doing a family thing when you’re out there to skate?
I wasn’t stressing it. It’s hard for them to make trips happen because of work, so I was stoked for them to make it to Europe for their first time. Maybe I was a little stressed that I had other priorities because, you know, it’s kind of fucked up to put something above your family, but I know they get it.

They didn’t press you too much, huh?
Not at all. We’d just skate all day and I’d meet up with them for dinner or they'd meet up with us for dinner. They bought you guys burritos, remember?

Is your dad is an opera singer for real or was he joking about that?
No, he really is. He gets paid to do it. He’s pro as fuck!

And now you're am as heck!
Fuckin-A right, bitch. I’m am as a motherfucker in this shit, FWM.

FWM?
Fuck with me.