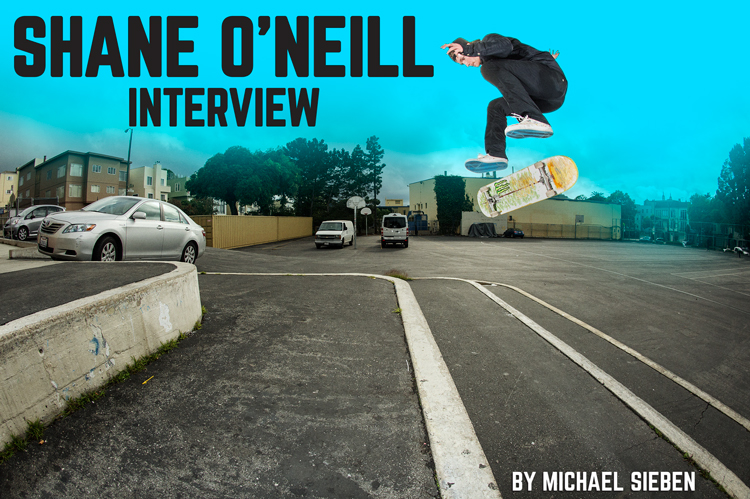 So, Shane, how'd you end up on Primitive? Did Paul Rodriguez call you up? Did you hit him up?
Basically, I recently had a kid and started thinking about things a little more, just about what I was doing. So I ended things with Skate Mental just because I felt like we weren't going to do anything different. I had a few prospects to do some stuff but everybody wanted to take their time and I personally wanted to keep going. Paul offered me something that allowed me to have James James [Shane's filmer from Australia] here and my homies that do photography stuff. And it just worked out so that I could really put it down. Plus, Paul's one of my best friends and lives just a few minutes away from my house.

Do you own part of Primitive now? Are you and Paul business partners?
Yeah, they gave me some equity in the company. It's pretty exciting. It's different because they already have their whole look and image—and it is what it is—but, for me, I don't really care about that stuff too much. I'm just trying to keep the skating going until my knees are just too fuckin' sore.

Do you have any additional responsibilities outside of skating, or are you just expected to act as a team rider?
Long story short, I'm still just a team rider, but I have some options to put some opinions out there.

Did you know all of the other guys on the team before you started riding for them?
Yeah, I know all those dudes. They're all awesome. I was already friends with all of them.

So you didn't have to meet a bunch of new dudes.
Nah, I live around the corner from everyone. Ever since I came to the States I've been skating with these dudes. And making it happen, this move to Primitive—it was actually really cool with how it worked out. I'm just really lucky with all this crazy shit going on at the moment with the industry.

Speaking of stuff going on in the industry, did you contemplate starting your own board brand?
I didn't want to do it by myself, for sure. I don't really believe in stuff like that. I know that you need a team. It's gotta be a team effort. I can't just say, "Hey, I like this," and everybody's gonna like it. It doesn't work out that way. You need people and you need different opinions—good skaters. So I looked into it but it was just going to take time and I wanted to keep it going.

Will you have a say as far as who gets on the Primitive team moving forward?
Yeah, for sure. Paul asks for everybody's opinion, like, even when I got on. I know he talked to everyone and it went well. He told me that anytime something like that might happen that it's discussed with everyone.

If you could put anybody on Primitive right now, who would you pick?
I'd have to say Miles Silvas just because he's amazing. I don't really know him too well, but it seems like skating with him would be good because he's just a confident young kid who's fucking up every spot he goes to.

P-Rod recently bought Cadillacs for his team manager and favorite photographer. What would you buy your homies to show your appreciation?
My filmer James James just wants cigarettes and beer, so I guess just a shitload of supplies.

The part that went up today is your second full-length part for 2015. Are you consciously gunning for Skater of the Year? Is that something you even think about?
Nah, not at all. It's not really a competition, per se. Me having two parts this year is just about timing. I'm just happy to get footage out. With the Internet, all of these parts just come and go, come and go. I'm trying to make my parts different or at least have new tricks. I'm not just going to post the same shit on Instagram. I just try to keep the street-skating video-part stuff going. 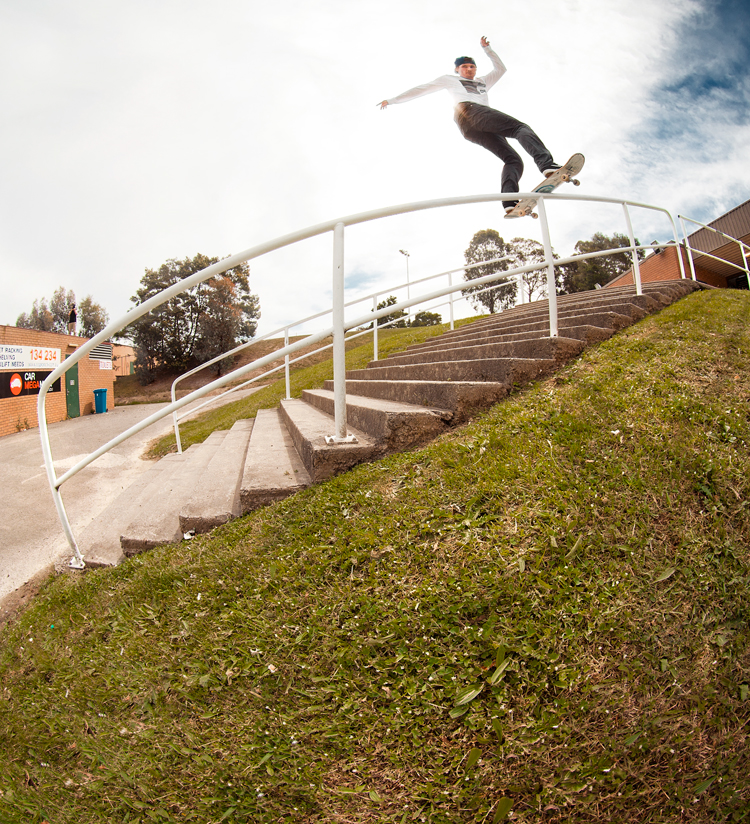 Just crossing those items off the bucket list.
Pretty much. At the moment that's pretty much it. I don't see the point in putting out a seven-minute part of me nollie flip nose-ing a ledge—just shit like that. Being in all of these contests now, the kids see me nollie back heel and eight-stair gap every weekend.

So you gotta bring something new for the video part.
Exactly, yeah. I can't be doing the same stuff I'm doing in Street League or whatever it is in the video part. You gotta put some effort in, you know.

What's up with the skatepark at your house?
I've had it for like a year now. I drew the design on a piece of paper, like, eight years ago. I bought a house and adjusted the drawing to what I like to skate now and—yeah, did that. The issue now is that it's in my backyard and people know where I live, which is pretty annoying. There will be like 40-50 kids from the neighborhood sitting out in front of my house. The gardener's kicked them out a couple of times. I wish I could just say, "Hey, come on in," but, you know… 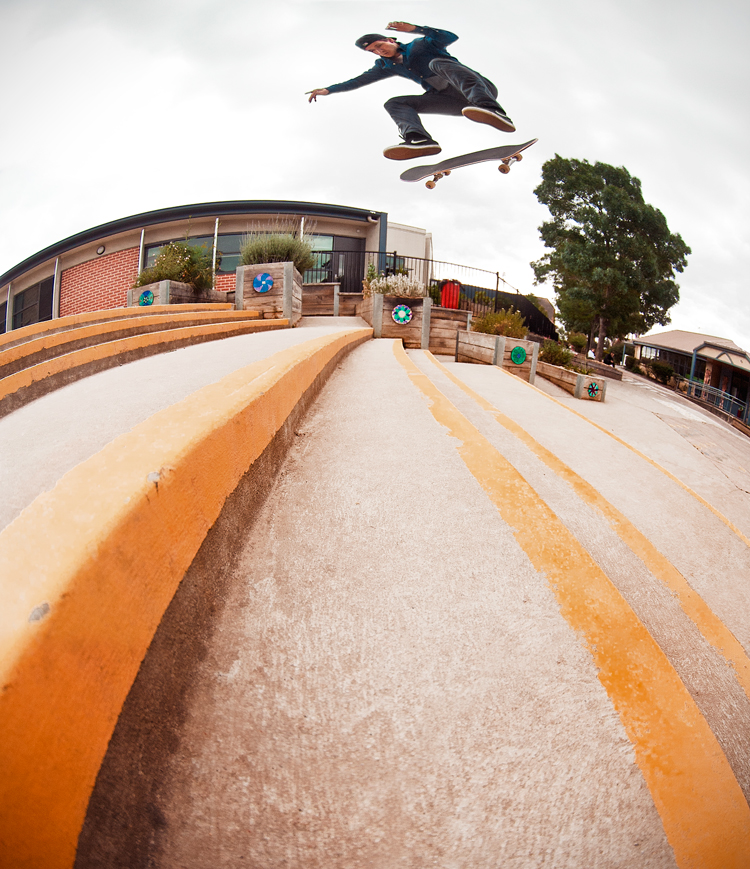 Do kids ever jump the fence and go renegade?
A couple kids have tried to skate and got kicked out by the gardener.

Would you have jumped the fence when you were a kid?
I don't know. I've thought of that. Probably not, though. Not here because there's a public skatepark right down the street.

Kids have it pretty good these days.
Yeah, as soon as I built that park, two weeks later there's four different parks near my house.

Could've saved the cash and put in a pool.
I know. Should've done that.

What advice do you have for the kids out there?
Kids are always asking, "How do I get sponsored?" and I'm, like, "Man, I don't even know." I did it the normal way. I did it by just skating and filming. But now what do you have to do? Do you have to tag your favorite skater 50 times a day on Instagram or post videos of yourself 40 times a day? I really don't know what you do anymore to get sponsored. The kids that I know that are coming up are still the ones that film crazy video parts. They come out of nowhere with a full part and I think that's still the way you get a nice little thing going in skateboarding.

So despite all of the social media and technology, the old formula still works. To quote Zorlac, shut up and skate.
Yeah, more than ever, I'd say. Because all of these kids are posting footage from skateparks and shit like that and if you've got one kid that worked on a video part for a couple of years he might end up on the Thrasher site. Game over for those other kids.

Two-thousand-fifteen is almost over. What are you cooking up for 2016?
Pretty much just keep this going—keep the skating going. I'm going to see if I can do less contests next year and just go skating more. Contests take a lot of time away from getting to go street skating. Filming takes a lot of time, too. Every now and then I'll be, like, fuck, I haven't done a front tail for, like, two years because I've been trying to switch double varial flip nosegrind something, you know. I haven't even done a front Smith in a year because I get to a spot and I'm trying tricks right away. I think I'll just enjoy 2016, look after my daughter and just skate. That's it.