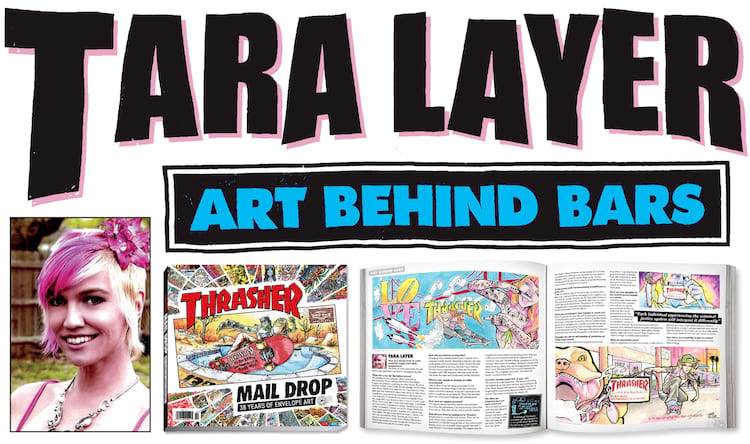 ALMOST ONE-FOURTH of all Mail Drop art envelopes sent to Thrasher originate from prison or jail. And, no offense to the law-abiding majority, but some of the most impressive pieces are sent from behind bars. Mail Drop is a wide-open outlet and all artistic gifts are welcome—without judgment. Creative expression does not require a background check.

To gain perspective for the Mail Drop book, we interviewed a handful of people who sent art to the mag while incarcerated. As a woman in prison, Tara Layer is not representative of most contributors. But her talent and spirit are embedded in the vibrant details of every envelope she sends. She almost always portrays women in her art, and yet her depictions have an affection and heartbeat that don’t fit the standard “sexy women” often drawn by men. With a lady’s touch, she captures the motion and freedom of skateboarding that have allowed her to soar beyond the walls that contain her. —Adam Creagan

Have you always been a dedicated artist or did the hobby intensify while incarcerated?
I’ve been an artist since birth. It’s only when I got older that I decided to strengthen my skills.

What was your life like before prison?
My childhood was awesome. Mom raised me in San Antonio, Texas, and my Dad lived in San Diego. I spent my summers exploring the West Coast. My teens fucking sucked. I had terrific friends, though. Darrell Shipp and Jimmy Smith were there for me. I was forced to take pills and stay medicated when I was about 13. After those tumultuous years of being committed to the loony bin over and over, I turned 18 and could now legally refuse the meds that I was forced to take. I was on 15 pills a day. When I turned of age I never took a pill again. I stabilized and that’s when I enrolled in college. Darrell joined the Army. Eventually, I moved out to San Diego. Darell had been deployed to Iraq and I received news that he had been killed. You just don’t think it can happen. We were all 25. My spiral into darkness began. I drank a lot and was arrested for DUIs. Despite all of that shit I became aware that I wasn’t alone. Raquel Hernandez helped me realize that even though the feeling of loss never goes away you have to keep going. There are many more bowls of shit that life served up to me but I simply wish not to discuss them.

How did you wind up serving time?
Struggling with a mental health issue, I reached out to someone I really trusted. I opened up to her and had a breakdown. Intending to help me, she went to the police and I overreacted. I think I scared her with my dark thoughts at the time. But that’s why I told her. It’s what you’re supposed to do when you have dark thoughts, right? Tell someone. After that arrest my life was never the same and I made some terrible decisions. 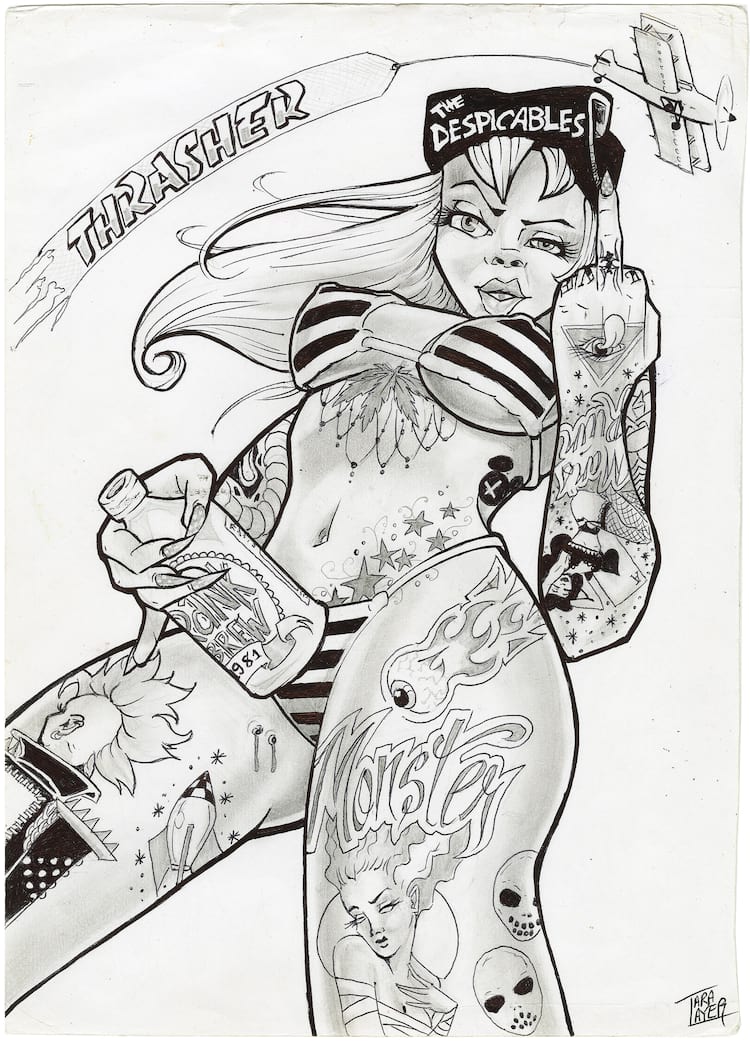 What is your system of creating art while incarcerated?
I like to draw in my cell. Being alone helps for less distractions. I’ve drawn things in the day room but it causes unwanted attention. In my cell I can listen to the radio. I usually pencil my ideas fist. Then I ink and color them. As a final touch I highlight with colored pencil.

You frequently portray women in your art. Your characters have a sort of feminine touch that differs from “sexy women” drawn by men. Do you agree and can you elaborate on this observation?
I do agree they are different. I think women are beautiful and I like the movement of the body and not just in a sexual sense. I want to depict an attitude and essence and not just the image.

How were art supplies provided?
Art supplies are not provided. Inmates must purchase them from the commissary. I wound up being a Unit Artist in the prison. Only then will the system provide supplies.

How did you wind up sending art to Thrasher?
Female prisons are not like male prisons. There are not many skaters here. Loneliness in prison causes fluctuations in identity. Long periods of time without your friends causes you to wonder about yourself. But when I read Thrasher I experience nostalgia. The support that the mag gave to prison artists was shocking to me. After the intake process into prison and all the rudeness and confusion, here was Thrasher making a positive out of the situation. After a year of reading, I decided to finally send some of my art. Along with my art being printed was the letter I sent. The five-word T-ed comment beneath the letter was: “It’s us against the world.” That shit held power. I needed to hear that. 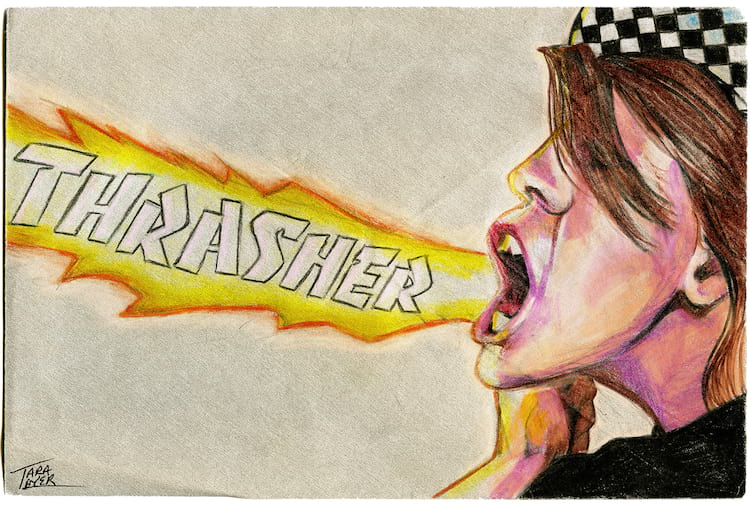 Are other inmates supportive of your art?
The women here are supportive. The process of seeing my original art go into print was new and exciting for all of us. Some women have given me supplies that are no longer sold in commissary, like watercolor brushes and erasers. They want me to paint this whole unit.

Are there art programs that you have access to?
The unit used to have a craft shop that allowed inmates to make jewelry and other crafts but it’s no longer active. The only thing left are the tables. Luckily, there are ads in newsletters that sometimes ask for inmate art. A notable one that led to other avenues was from an indie press in Brooklyn, NY, called Discipline Press ran by Tamara Santibanez. PEN America is a terrific program that works one on one with incarcerated writers. 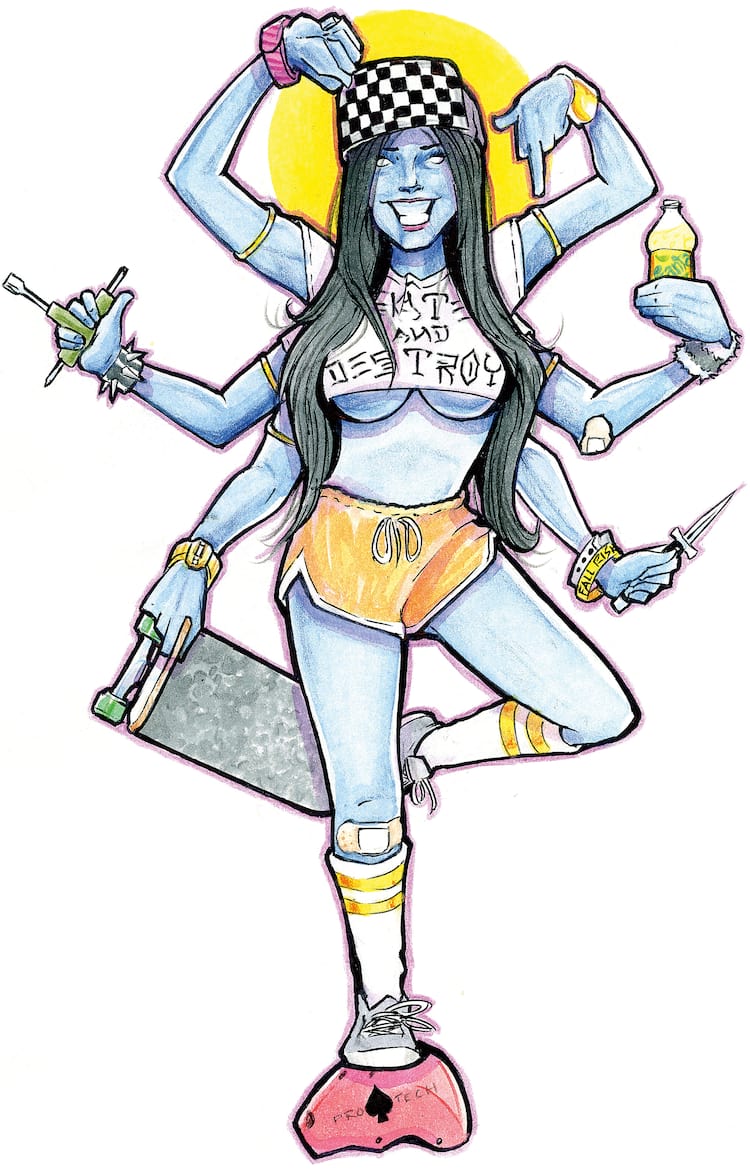 Is the prison staff accommodating or indifferent to your art?
They are unlikely fans of my art! It has not always been that way. I showed off the envelopes in the magazine and a couple of guards asked for my ID. They didn’t believe it. One guard seemed really interested. After that, he asked about my art developments. The process of seeing an original make it into print was intriguing. The envelopes would elicit smiles from the officers.

Have you encouraged other inmates to create art?
Back in county, we were allowed to send mail to the men across the street and I started an Artists Unite Movement. As in, let’s challenge one another with art. I tried to keep up but their backgrounds in graffiti rolled my shit up and smoked it. I loved seeing those envelopes every week. I’m fascinated by graffiti. Those guys admired my freestyle and to this day we think one another is the better artist. 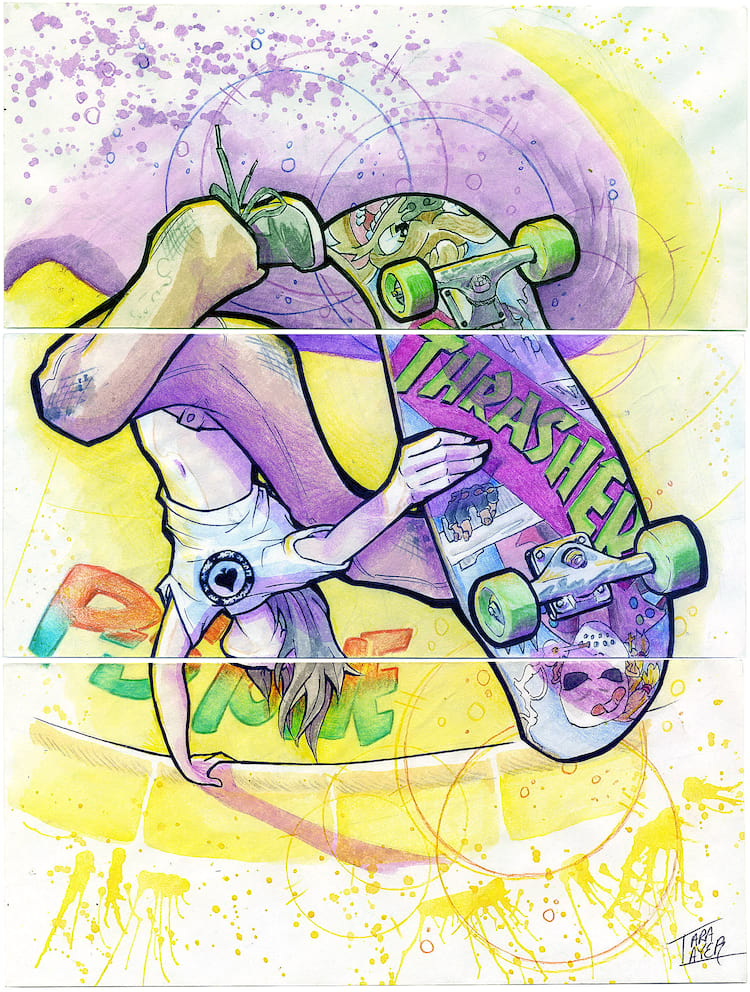 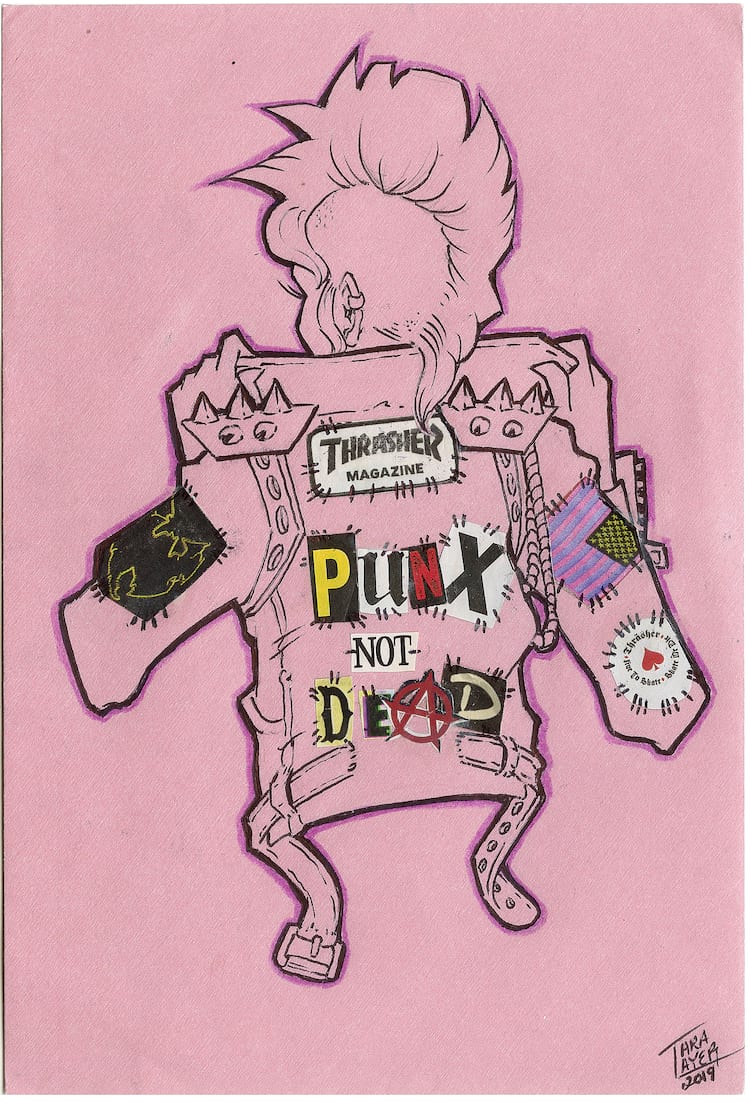 Describe the effects and benefits of producing art while incarcerated.
One benefit is that I don’t have to spend a lot on wall decorations. I can help friends grow in their skill or provide them with templates to work off of. It’s helped me land an ideal job as a Unit Artist instead of slaving away on a chain gang.

Where do you get your art inspiration?
Comic books. Lady Death was my first obsession. I used comics to teach me how to color. I also really got into Tank Girl. The art of Michael Linsner is one of my favorites. At one point I attended San Antonio College and majored in Fine Arts. Mrs. Watson and Nell Black were a huge support. Eduardo Rodriguez taught me to see. 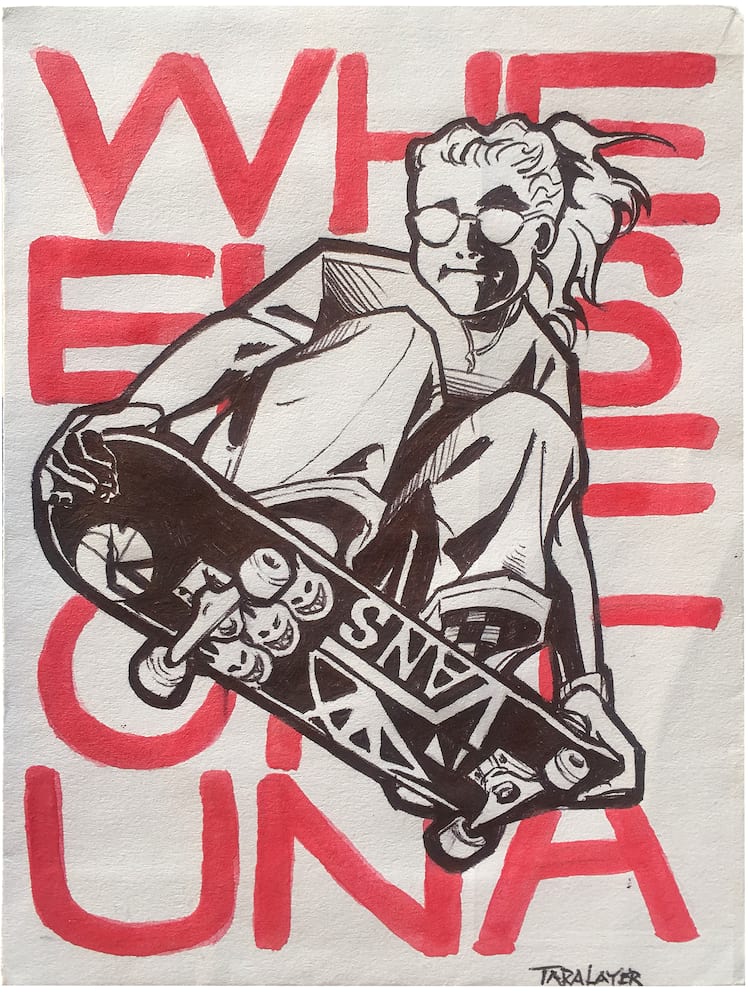 What are your thoughts on the criminal justice system as a whole?
It fucking sucks. Prison sucks. Courtrooms suck. Lawyers who rush you to sign for your sentence so they can make it to their lunch date on time suck. The controversy surrounding its existence is based on an individual’s success or failure once released. Not everyone has the ability to succeed. Each individual experiencing the criminal justice system will interpret it differently. Most often it breeds trauma, anger and severe anxiety. Maya Angelou said, “Habits change or solidify under pressure.”

What are your future plans?
Ride this nightmare out until I’m released. I really want to give my dad a hug. I have serious plans to deliver a kick-ass parole packet. I will also fabricate some way to help my homies on the insider use my art to help inspire others to get involved with men and women in prison.

Any advice you would like to give to readers?
Cherish the ones you love. For what is given can be taken away.

For info on supporting the arts in our prison system, Tara wanted to make special mention of the PEN America’s Prison and Justice Writing Program. 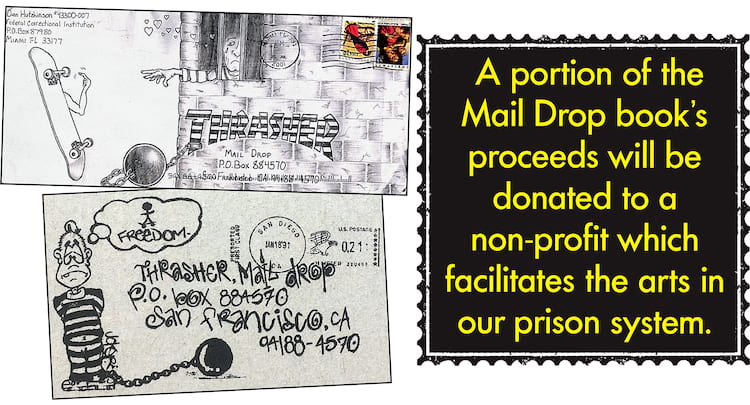