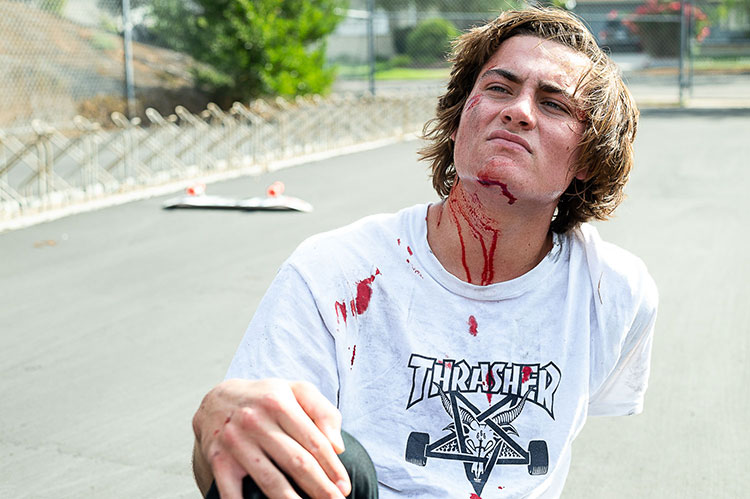 By Dan Connelly
Photos by Rhino

My name’s Alexander Willms. I go with Alex.

How old are you?

How old were you when first started skating? 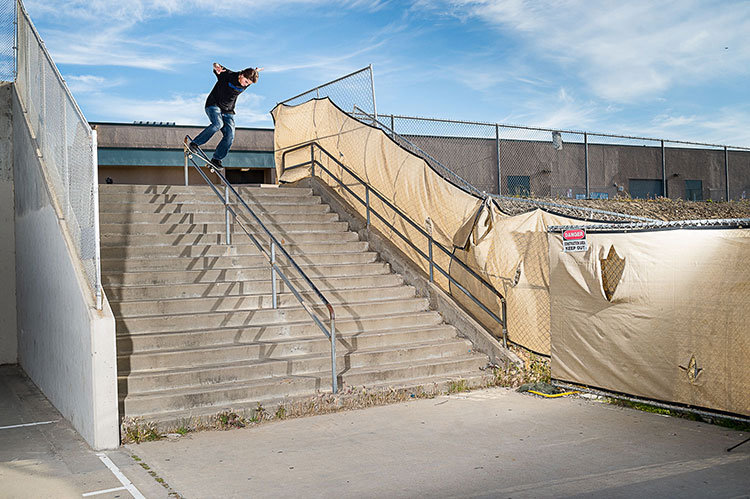 Switch blunt at a Christo art installation. Look it up

How did you come about your first board and what was it?

My parents got me my first board. It was a Zero deck with lightning surrounding the letters. Still got it chillin’ under my bed.

Where are you from?

I’m from a part of SD called Carmel Valley.

Where did you start skating?

I started on this little patch of concrete on the side yard of my old house back in the day. It was super narrow and claustrophobic but it was the shit. Had a couple QPs, a funbox and a little flatbar. Once it started becoming an obsession I headed over to Carmel Valley park. 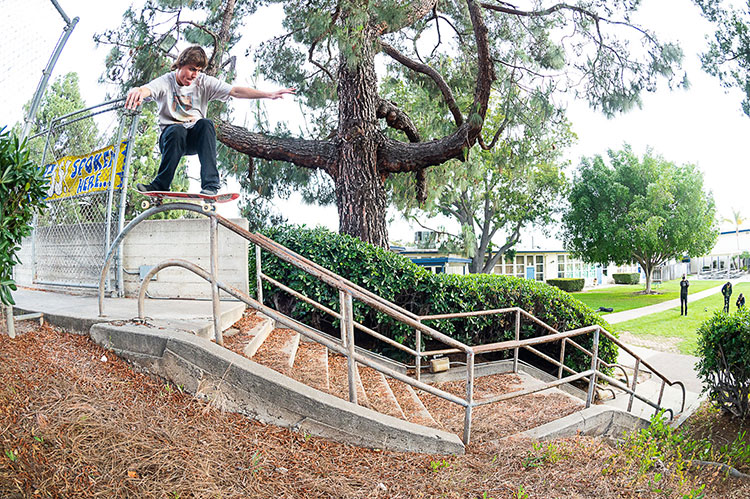 Like roller coasters? Then you’ll love this Slappy 50-50. Buckle up

How long did you live in CV?

I’ve moved around a bit, but I’ve lived in the Del Mar/Carmel Valley area my whole life.

You and Wes grew up skating in the same town, right?

Yup. We both grew up in CV. I used to watch him and other SD legends skating all the local spots in the OG Sun Diego vids. Shoutout Carmel Creek 8, CV rec. center, TP manny pads, Ashley Falls 11. 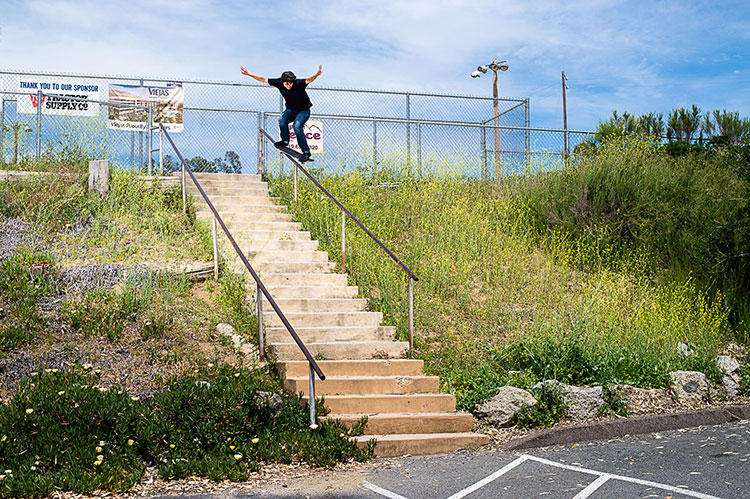 Did you get to skate with him as a kid or see him around at the local park?

He’s a busy man, but we would still see him all over the place. He quickly became the hometown hero to all of us locals. Some foreshadowing SOTY shit!

You got any skate rumors or stories that you heard of tricks Wes tried or did around town that were never confirmed?

I heard he did nearly every flatground trick possible down the classic eight stair. Theres this huge local rail landing into a busy street nobody has hit that people have said he grinded, stuff like that. He told me a story the other day where he was bombing down this hill at Torrey Pines. Basically it’s a long-ass hill that gets you cookin’ pretty quick, only to end at a steep 14 stair that has claimed many people’s ankles. He said he was haulin’ ass down it on a cruiser, dodging students, kind of like a slalom course. At the bottom he was gonna hit the set but a car almost sliced his face off and sent him directly to the side of the set where he jumped off a cliff-like dirt bank into the grass. The dude knows how to tell a story. 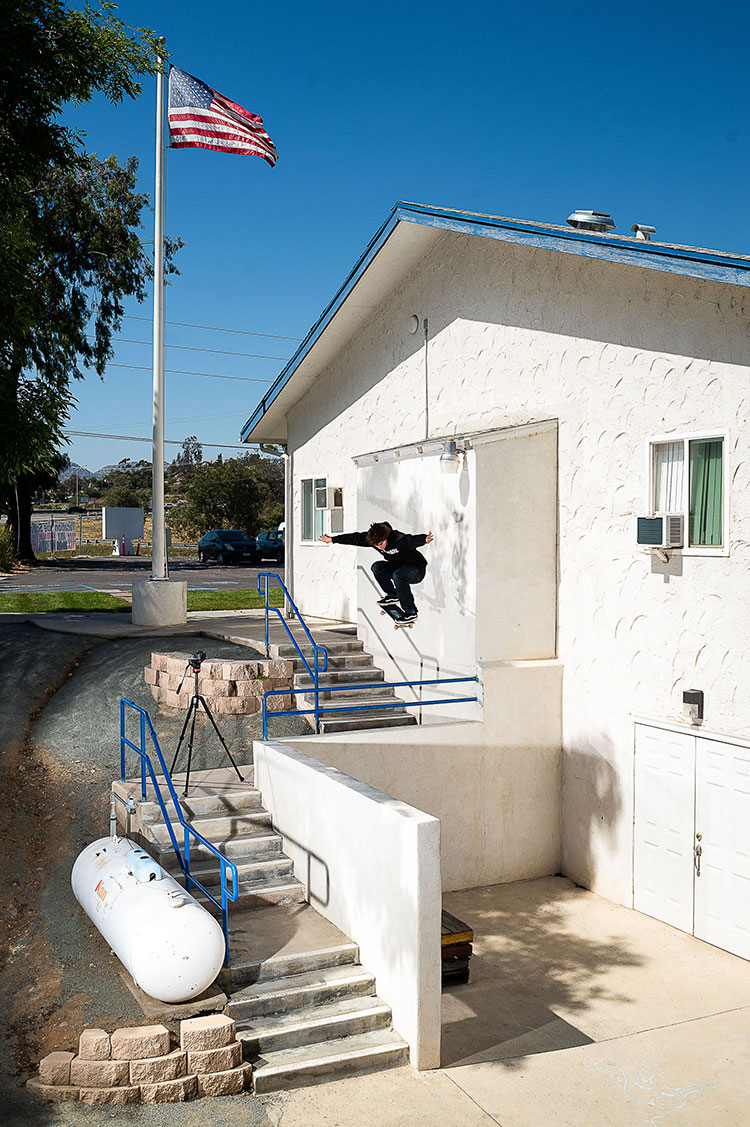 Home of the free, land of the massive ollies

Who was your first sponsor?

Sun Diego was my first sponsor back in 2014.

How’d you get hooked up?

Just by going into the shop a lot to get all the necessities. The dudes working there at the time were super tight. Eventually they asked to see some footage and were down to hook it up. 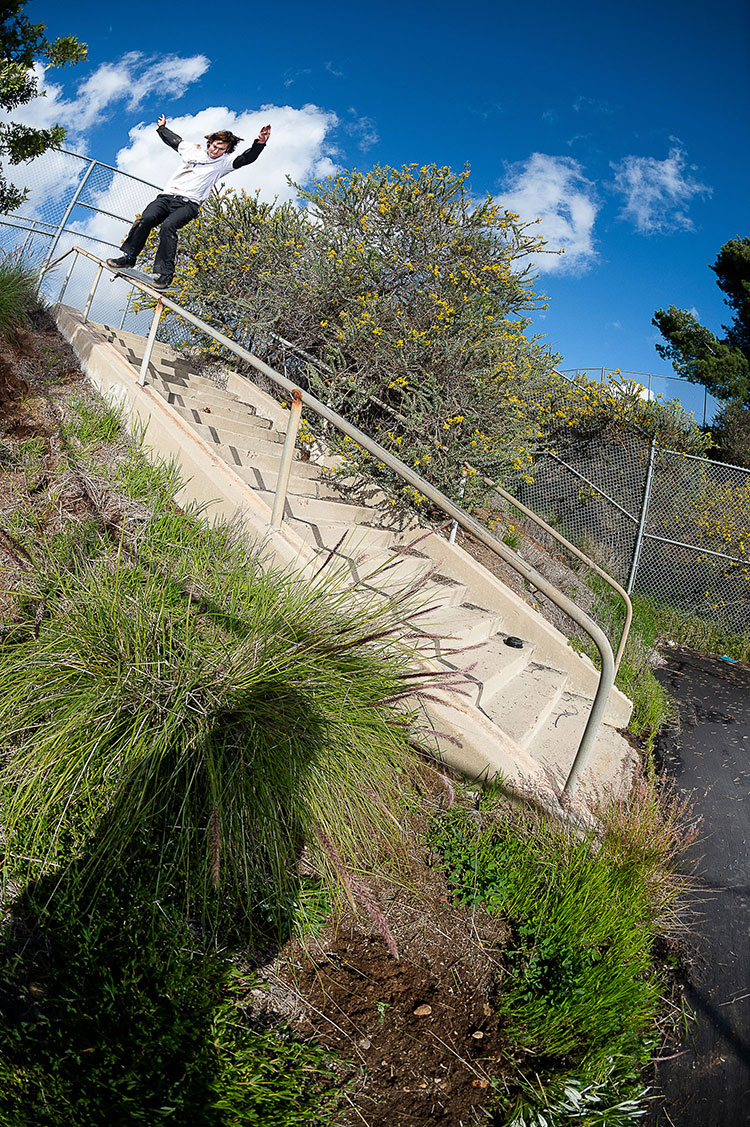 Locked-in Smith. Can somebody Photoshop that shadow out?

Rumor has it you’re a black belt. How did you get into that?

Growing up I didn’t do much before I started skating. That was one of the things I had started up and abandoned once the board came along. It was a self-defense class. After a while I wanted to get back to it and picked it up again. I’m not one to start fights or anything, I just want to be able to defend myself in case something happens.

And how long did it take you to get to your black belt?

It took something like 11 years. I took about a five-year break in between.

Are you super into skate history and knowing we’re it all stems from?

I like to nerd out on a good chunk of skate history. Other stuff I know nothing about. I love the early-to-mid-2000s era of skate videos. What interests me most is the spots. It’s sick seeing someone do a trick on a spot you’ve been to or heard about.

What are some of your favorite videos from before your generation?

New Blood was insane and I love Yeah Right! 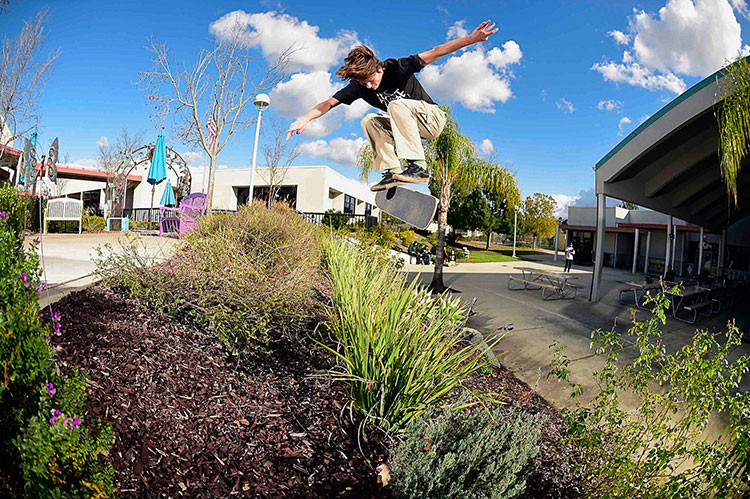 Backside heelflip—can’t learn that at the dinner table

What are some of your favorite videos you grew up with?

Shit, there’s so many. The first skate video I ever saw was the Sk8mafia Am Video in 2009. That one, Stay Gold and Mind Field were on repeat. Homie videos, too, like A Happy Medium 2 and all the Shep Dawgs videos. I’ve watched Cold War probably over 100 times. My parents were always yelling at me to get off the computer and come to dinner.

What about current videos?

It’s been hard to keep up with everything. The Santa Cruz Til the End series are always sick. Vans vids come correct. Anything Tum Yeto puts out is gold. Fuck This Video! by Vindog. It’s always extra special if the skate spots are in SD.

Jesse Silva has been a staple homie and filmer of yours. How long have you been filming with him and what have you guys put out together so peeps can look ‘em up?

I met Jesse during the filming of the Sun Diego vid in 2016 and have been filming with him ever since. He put together my part in Sun Diego’s Youth, got me a solo Thrasher part, filmed a bunch of stuff for the Mafia part and we’re working on one for the Local Skate Shop video set to come out at the end of the year. He’s really good about pushing me to do tricks. He taught me a lot about everything—what tricks look the best for my style of skating, which ones don’t. I listened to him, even when I didn’t want to. He’s my fucking dog and I owe everything to that fool. 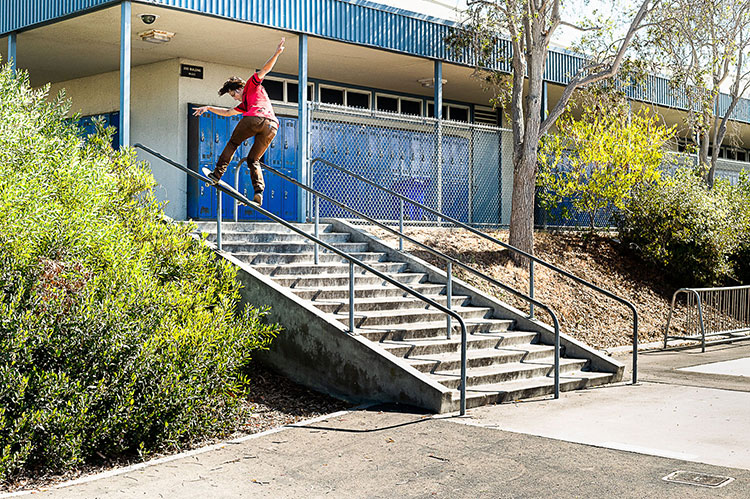 Mohkie is a crew of homies that my other fucking dog Isaac started in CV in the high school days. I don’t know exactly what the name means, but to me it means a bunch of sick-ass dudes that like to skate together.

How many Mohkie vids are there?

Theres two out so far, a third one in the works and a Euro montage from a trip they took coming in hot.

You’ve been super hyped on Three 6 Mafia for a long time. How’d you get into them?

Isaac showed me Three 6 my sophomore year of high school. He would always bump it on the way to skate so I got into it. I like their older albums from the ‘90s. Mystic Stylez, Triple Six - Underground and Koopsta's albums were the shit growing up. It’s the only style of rap music I can tolerate anymore.

Your also into a lot of stoney hippie ‘70s rock. What are some of you go-tos that get you hyped to skate?

I’m more into that type of music nowadays. Some notable ones are Patti Smith, a band called Dark, Hawkwind, of course. Pretty much whatever comes my way. 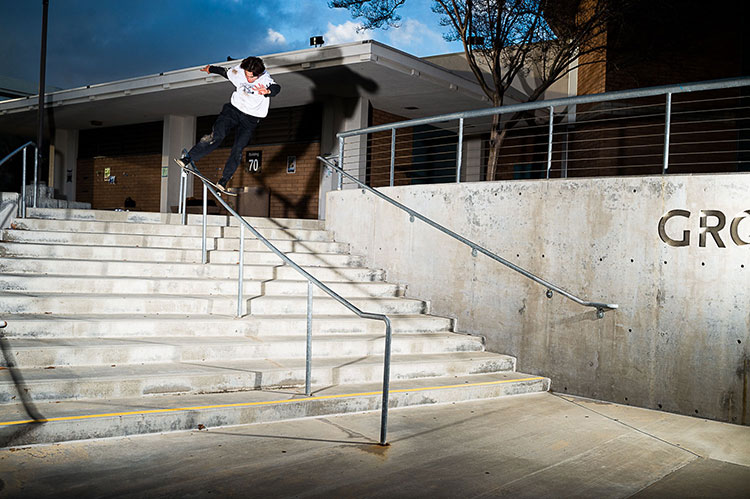 Healthy lipslide through the kink

When you’re thinking about hitting something heavy, what’s your usual MO before actually going out and trying it?

I skate every day so when I get a trick thats feeling healthy I like to find a spot that it works for. I’ll go there and check it out before I try it. Spontaneously finding stuff is fun too. It all depends on the spot.

You hit your head pretty gnarly over the past couple years can you tell us some of those stories.

En Canto and Muirlands. En Canto was fucked. I fucked myself over on that one. Summer 2018, I was trying to front Smith layback it and got caught on a little divot in the rail. I smacked my temple and skidded on my face. I started convulsing and had a full-on seizure right after I hit the ground! I don’t remember any of it. The whole day is wiped clean. I woke up in the hospital having no idea where I was or how I got there. The doctor said to keep it mellow for three-to-six months, but I started skating after one month. I got a bunch of scans done after it and everything looked healthy. Muirlands looked worse than it was. It was only a few months after Encanto so the homies were scared for me. I hit my head a little but fucked my heel and toe up way worse. I still felt okay to keep trying it and luckily got away with it. My homie Braden was skating it too and got his trick all easy. Good-ass day minus the slams. 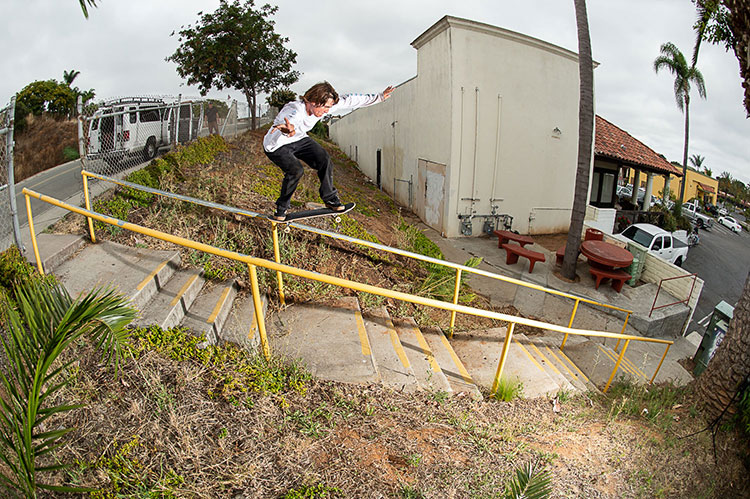 You recently went on your first two-week skateboard trip ever at 21 yrs old and it was with Rhino and the heavy hittin’ Indy crew. Tell us a little bit about that and why’d you leave early?

It was super sick; I learned a lot. Very heavy but mellow at the same time. Was out there with Tanner Van Vark, Ducky, Winkowski, Ryan Townley, Jesse Lindloff, Manchild, Tylre Wilcox behind the lens, Rhino and Gavin. We just hopped in the van and checked out a bunch of sick spots. The homie Tim Savage showed us around. Dude’s got spots. We went to Boston, New Hampshire, Connecticut, Philly, and New York. Boston was my favorite. It’s got everything you need. On the days that it rained we would go to indoor ramps. On my last day out there I tried to get one last trick on this rail and slammed pretty hard, face planting and fracturing my shoulder.

You recently had a Lunatic Fringe in Thrasher, a two-page spread welcome-to-the-Mafia ad, got some shoe flow from Vans, Indy and Bronson are backing you, Local Skateshop is hooking you up and you just had a welcome-to-the-Mafia party and video premiere. Everything seems to be falling into place in these last few months. How are you feeling about it?

Nervous, excited and fucking stoked. I’ve learned a lot and got a lot more to learn. I wouldn’t trade it for anything. 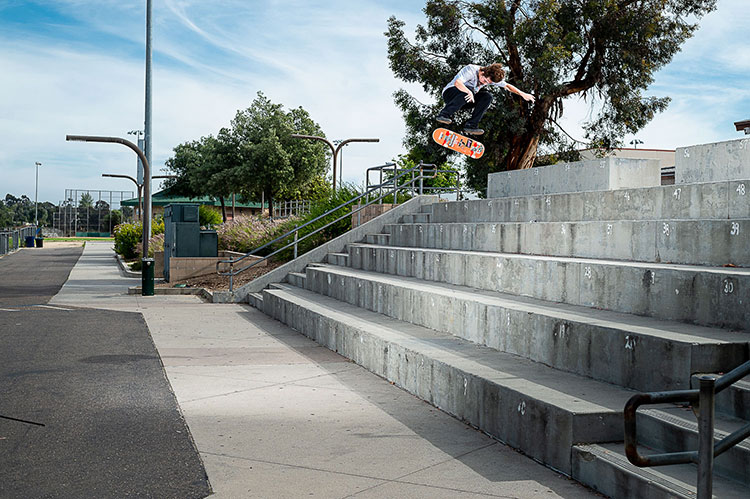 Switch heel on lock? Take it to a five block

What’s next for you on this forever struggling path of skateboarding and adventure? Anywhere you want to go or you got some goals to fulfill?

I’ll never get tired of SD. I want to skate here as much as possible because you never know what will pop up or what random sick shit you might find yourself skating. I also want to venture out a bit more. The East Coast had the sickest spots I’ve ever skated in my life, so I’d be down to go back there before anywhere else. There is so much out there, though. I want to explore it all! For goals, I just want to skate everything. Handrails and curbs are fun but it would be cool to get better at tranny, ledges, mannys. I want to skate faster, push better, eat healthier. There’s always ways to improve the struggle and expand the possibilities, That’s why it’s so much fucking fun.

Wes and I were throwing around names for the new vid and we are thinking about calling it Decade of Regression. It seems appropriate since every trick in the book has come full circle in these past ten years.  We might as well dedicate our vid to it for 2020. What do you think, you ready?

Back it. That’s going to be a Goddamn legendary one. I’m ready. Get in the van, close the door and crack a window. It smells like shit in there! 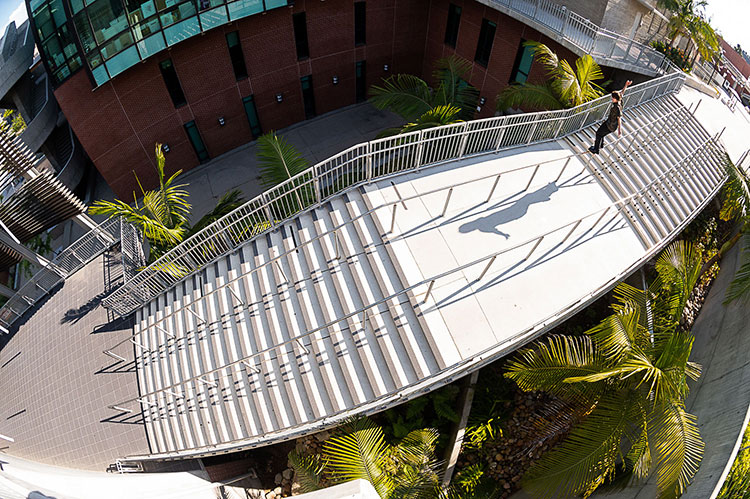 Gargantuan 50-50 from Alex’s Lunatic Fringe in the September ’19 issue of the mag. Hell yeah he’s a made man