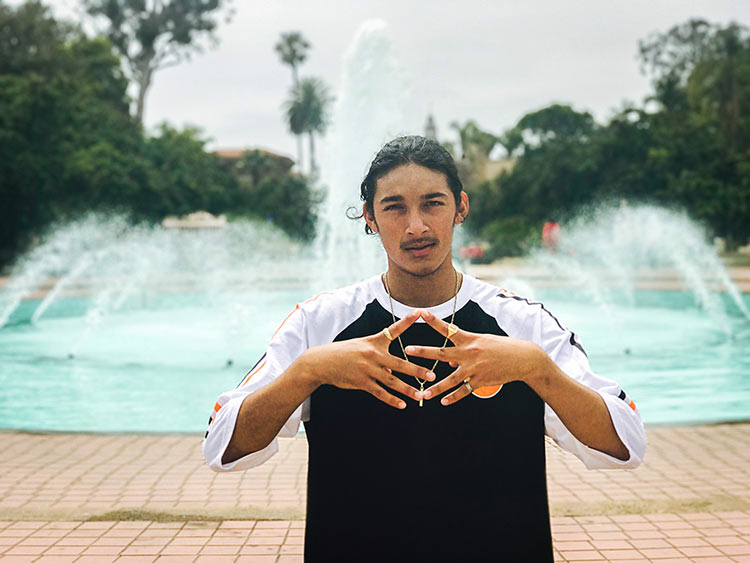 Is that you, you fuckin' bum? How you doing, homie?
Good. Just chillin'. Just right here at my pad right now.

What day is it, Wednesday?
I think it’s Thursday.

You’re just posted up at the crib on a Thursday?
I’m about to go skate right now. I was just waiting.

It’s fuckin three o’clock, dude. What’s up with it?
I know.

So, bum, what was it like filming for this here DC promo? How is it when you go out and skate? What’s your thought process?
Well, it’s different every time for every different spot. It just depends how it looks. If you’re hyped on it it’ll be a lot easier to skate it, you know? 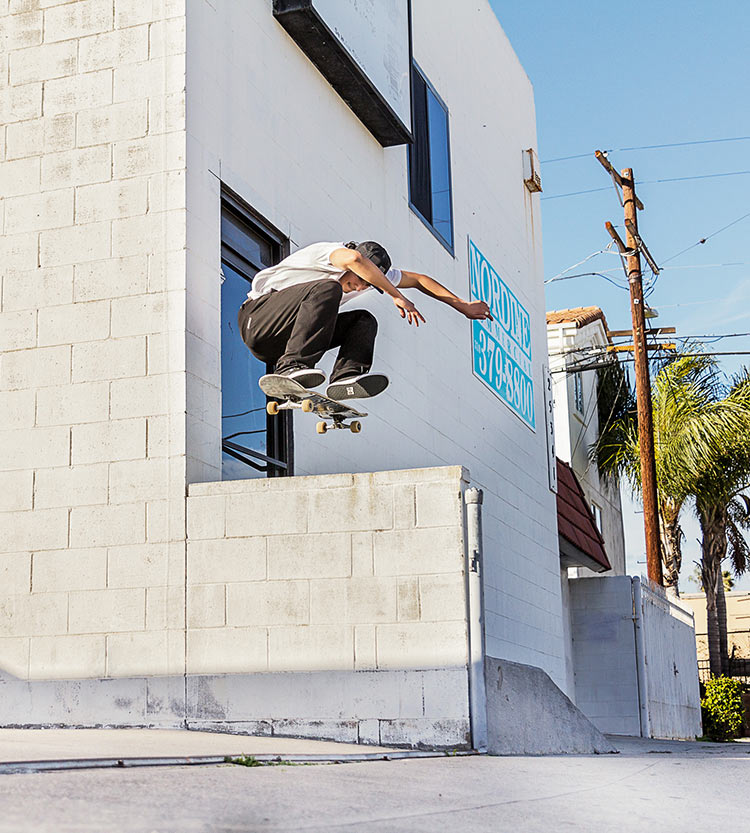 Warm it up at the ledge and then head to the bump. Switch front shove to hype the homies     Photo: Connelly

What gets you hyped?
Just whoever I’m with, the homies I’m with. It depends what spot. I usually like to go to some buttery spots to warm up, like some ledges or something. I like to warm up on some ledges. it’s usually a good time.

That’s what’s up. You like to warm up with some rips, dude. Sounds like you’re a little too warm over at the crib right now. Been chilling since fuckin' three? You gotta get out of the house, G.
I will. I will. I’m about to get out right now after this.

Tell me about your time in Barcelona. You just went to Europe for your first time, huh?
Yeah.

How was that?
Dude, that shit was crazy. It was hella good times. Definitely some crazy times with you, you fuckin' bum.

Tell me how Barcelona can turn you into a fuckin' bum.
Just hanging out with the crew, it’ll get you.

It’ll definitely get you. Those streets will eat you up.
Hell yeah. The spots, though, are super fuckin' buttery out there.

Were you going in the club?
Yeah.

How old are you?
Nineteen.

Yeah, you can’t be in the club up here unless you got a fakie.
I know.

Where’s your fake ID?
I don’t got one.

You should just use one of your brothers', man.
Fuck it.

Take one of your brothers' old IDs.
Nah, they don’t look nothing like me, though. 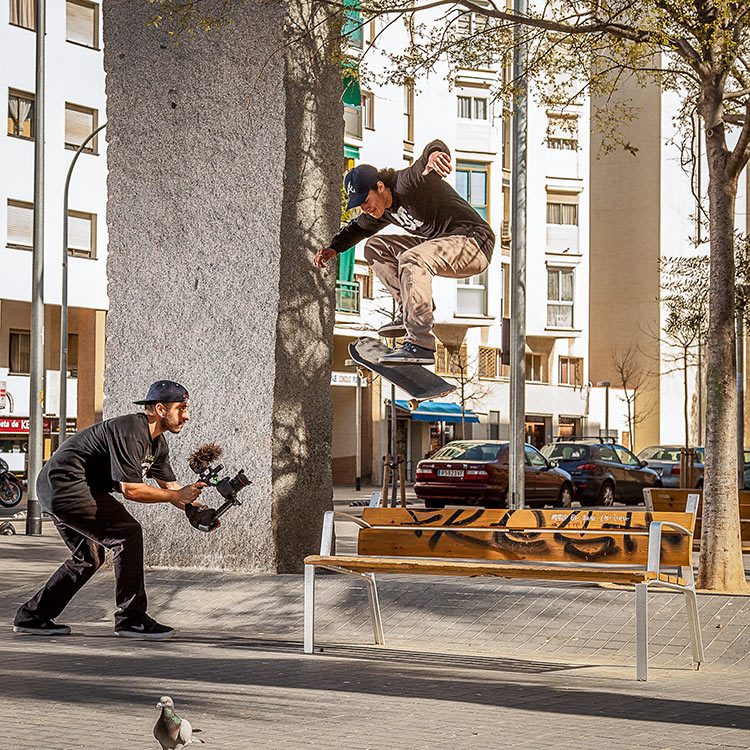 How many brothers do you have?
Seven.

And how many sisters?
Five.

And where do you fit in the mix?
In the middle. I’m the youngest of the guys and then forth to oldest out of the girls.

Legends. That’s a family and a half.
Yeah.

So, player, let’s cut to the chase. We went on that trip, three weeks out in Barcy. Why the fuck didn’t you come home with the rest of the crew? What happened?
Alright, so I guess the first day we got there—

No, I’m talking about when we left.
When everyone left and I got stuck out there?

Yeah, how did you get stuck out there?
I left my passport in the damn bag. But I didn’t even notice. I forgot about it.

When did you find out?
The last day when we were dipping home I was, like, “Oh shit! I don’t even have my passport on me. Where the hell is it?”

What time was this?
It was probably, like, three in the morning. We were there early 'cause we had to fly at 6am, you know? So we were there early all hyped, like, “Yee, we’re about to dip,” and then I had to go back.

So what’d you do?
Well I thought I left it at Surrey’s pad, so I took a cab back to his house and then it wasn’t there. I couldn’t find it anywhere in the room. I thought it fell out of my bag or something so I was, like, “Fuck, I lost it for sure. I’m not gonna find it.”

Oh, man. How long were you stuck out there?
A week and a couple days.

Well, not a bad place to get stuck, dude. I seen you stacked a couple clips—couple sneaky clips.
Yeah, I’m hyped that I got a couple clips while I was out there but I’m just happy that Surrey was out there and I was able to stay at his house. Thank you.

You wouldn’t have got the last trick in your part if you didn’t get stuck, though, right?
Yeah, if I didn’t get stuck I wouldn't have gotten it. That was random too. We just cruised out with some of the homies and ended up at that spot and I was, like, “Fuck it. I’ll try to film this.”

Still getting buck. That's wassup, man. So how'd you get your passport back?
Well, Dan sent me a picture of my passport and said it was in my bag the whole time. So I was, like, "Fuck," but I was happy that I didn't lose it. So I wasn't stressing. I was, like, “Fuck yeah, I'm chilling in Barcelona for an extra week.” 'Cause he said he was gonna mail the passport to me. 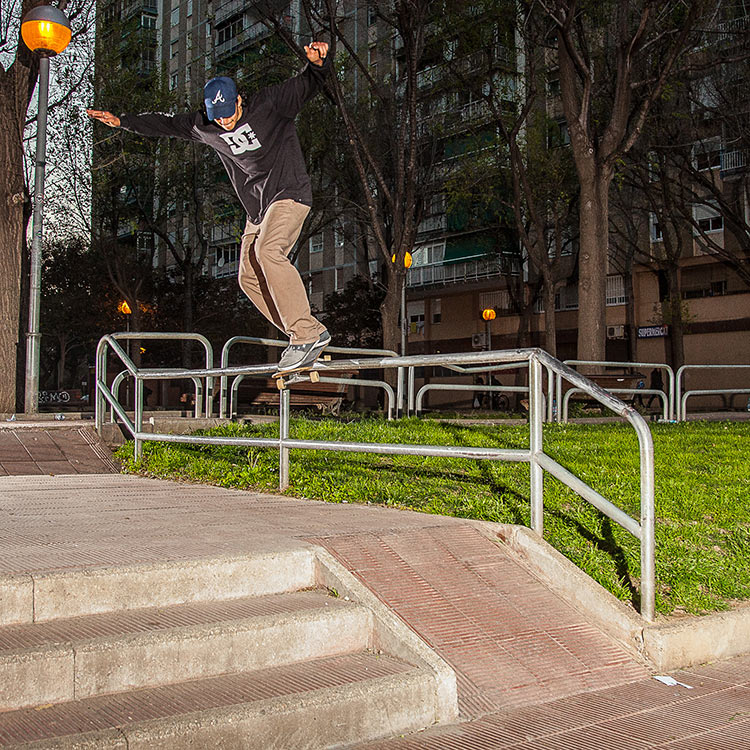 So he mailed it back to you in Barcy?
Yeah, I just waited at Surrey's house to get it.

They took your passport?
Yeah, 'cause I reported it lost. I went to the embassy out there to try to get a new one.

Oh, so they had to take it.
Yeah, they took it. But I still have the temporary one that's good for one year but I gotta go get a new one.

Good thing you made it back to SD. What's it like growing up in SD? Were you born in San Diego?
Yeah, born in Chula Vista. But I've lived all around, like, Chula Vista, San Pedro, but always all in SD. All the same.

Does your whole family live at the house?
No, not anymore. They did for a second when everyone was trying to figure out what they were gonna do. But not anymore. Now it's just me, my mom and my cousin.

How many people were living in the house when you were growing up?
Probably, like, 12, all in one house. I had another house before we moved here that was a little bigger. It was crazy. We would just be packed in rooms sometimes. It was funny.

In that house with 12 people, how many bathrooms were there?
I think just three.

Damn. Did you have to wait a lot? That's a good rotation.
Yeah, three's pretty good. Sometimes it would suck if I had to go to the bathroom, if all the bathrooms were taken up, which happened sometimes.

You just had to go outside, huh?
Yeah, I would. Or in my room. I'd get a bottle and pee in that shit, like, “Fuck that. I ain't waiting while everyone's taking a shower.”

Hey, when you gotta go you gotta go. Are your folks hyped on you skating?
Yeah, they’re hyped. My mom just realized that I’m good at something and it makes me happy.

When did you start?
When I was eight years old. So I’ve been skating for 11 years.

The first fuckin' day?
Yeah, my brother taught me. I’ll put that on. I swear. It was crazy. 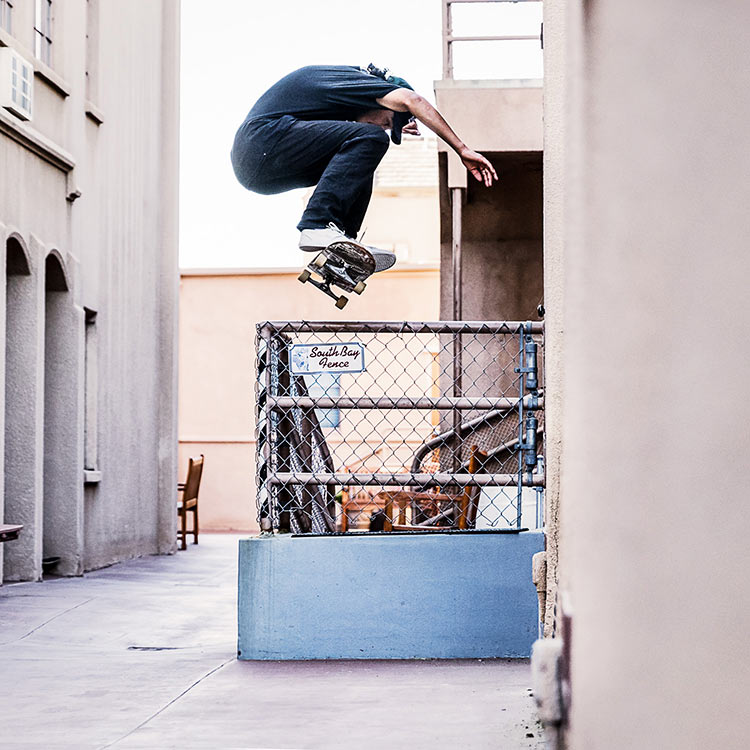 It's gonna take more than the South Bay Fence company to stop Alexis from stomping this switch heel     Photo: Connelly

That’s one of the rudest things I’ve ever heard. It took me, like, four years before I could kickflip, man. Super rude.
I kinda hate saying that.

When did you learn your first body varial, your first sex change?
Probably last year or something.

When did you get on the Mafia? When did you start skating with us? I remember you rolling around when you were a little boogie.
I know. I think five years ago or something.

Five years with the Maf'?
Yeah.

Damn, dude. How did we let this happen? How did we manage to kick it with such a bum, dude? You’re always taking everyone out.
Oh fuck.

Why you always taking everyone out?
Nah, I’m not. I just skate.

How come when everyone does a shove it you do a flip to a shove?
It’s just fun. That’s why I do it.

Respect, dude. You’re a bum. Yeah, you’re a legend, dude. I respect you. Much love. So what’s next? Summers coming up. What you gonna do, you bum?
I got a couple parts coming out hopefully. Just keep putting more stuff out and trying to film, go on some more trips.

Respect, man. Is there anyone you’d like to thank out there?
I’d like to thank all my sponsors, Skate Mafia, DC, Jimmy Astleford, Dan Connelly, you, you fuckin' bum, everyone that helped me out, my mom, my brothers, the homies that hit me up every day to go skate.

That’s wassup, man. Good shit. Hope to see you soon, you fuckin bum. I’m gonna be out for a month but I’ll see you when I get back.
Hell yeah. Hopefully you’re not too fried when you get back.

Oh, dude, I’ll be the crispiest crustacean to ever walk the Earth. I’ll be a petrified piece of jerky washed up on the beach.
Hell yeah. 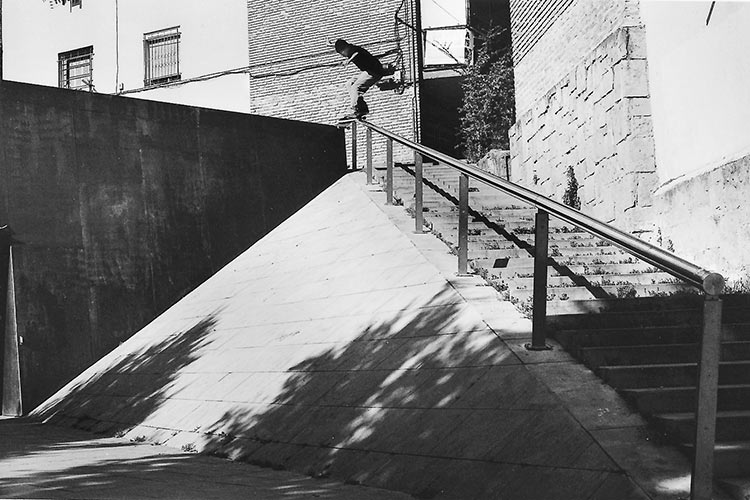 If he hadn't lost his passport, this trick wouldn't have been in the vid. Front feeble transfer—muy loco!     Photo: Surrey