Are you guys still in school?
K: I am. I go to El Camino high school as a freshman.
Z: I’m home schooled.
D: Not really. Technically, no. About to take that test, you feel me? 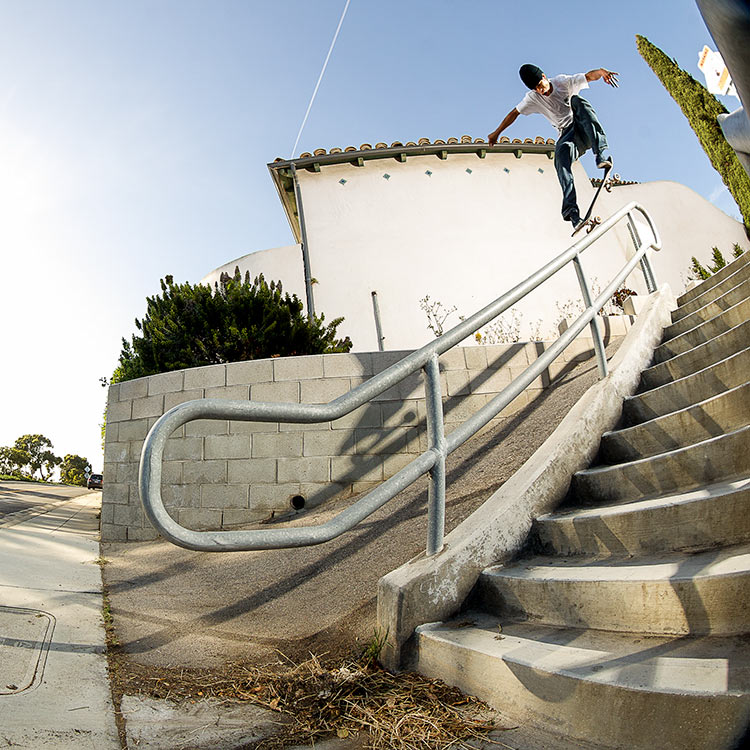 How are the grades looking these days, Kader?
K: Awful.
D: Tell him the truth.
K: Right now I have three Cs and three Fs. It sucks. I need to bring them up. The Fs aren’t that low, though. I think I can still do it.

Who would be the first guy on the Baker team you would ask to help you out with homework?
Z: Probably Beagle.
K: Andrew seems the smartest to me.

How did you guys get hooked up with Baker? I don’t think anyone has ever got on Baker with a sponsor-me tape. You really have to be in with the team to get on.
Z: From skating Pedlow Park with T-Funk.
K: T-Funk and then Andrew was the one to really help me out.
D: Theotis was the one who put in a good word for me and started getting me boards.

So you guys were friends before Baker came about?
Z: Yeah, I first met Kader when he was nine or ten. We used to skate CASL contests back in the day.
K: Skating Pedlow a lot too.

You guys skate Pedlow a lot, huh?
Z: Every day.
K: Pretty much every day. Even if we aren’t skating there that’s where Doughnut will come pick us up and drop us off and stuff.
D: These fools live there.

What type of hijinx go on at Pedlow?
Z: Just classic skatepark shit. Little-kid fights and random tweakers walking through the park. It’s pretty close to a Metro stop so you always get randoms rolling through.

Who all is part of the Pedlow crew?
Z: Us, T-Funk, our friend Felix.
K: Seven and Patrick.
Z: Stevie Perez. There are a ton of us. 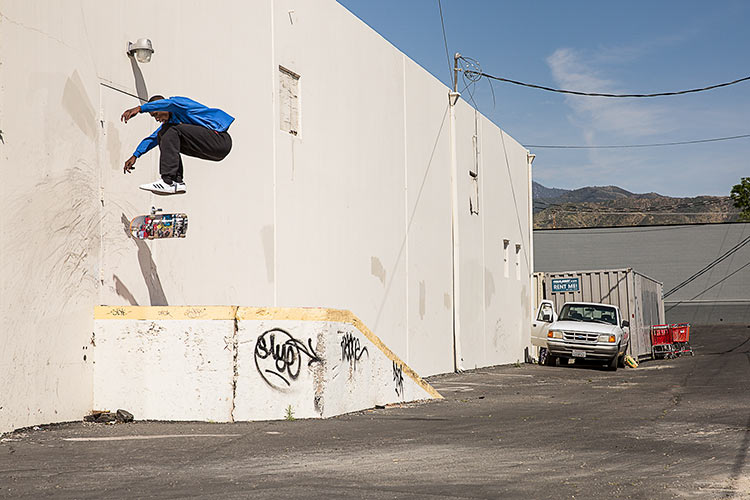 Donta casually varial heels what most would call a big kicker     Photo: Adams

Is Felix the filmer homie?
Z: Yeah, it’s sick ’cause Andrew was down for him to help out filming since he is always with us. He has been filming all of us for years so it is cool to just have the mellow homie vibe on the sesh.
D: He’d be down to whip out and pick your boy up all the time too. He is tight.

How do Felix sessions differ from Beagle and Doughnut?
D: At the end of the day I’m filming for Baker so I don’t want anything boof in my part. I put a lot of thought into anything I want to film so even though it’s the homie filming it and not Beagle I’m still trying to make sure I try my best.
Z: Felix was the first person I filmed with so it is just super natural.
K: Seems like we stay around the valley more with Felix.

Andrew seems pretty involved with this video, right? Is he editing it? What is that process like?
K: Andrew and Doughnut are both editing it together. It’s cool if we get a trick that day we get to send it over to Andrew that night and he lets us know if it is going in the timeline.
Z: This is the first time I ever filmed with multiple angles and had photographers there and stuff. It makes me want to think about tricks more and plan on going to actual spots. 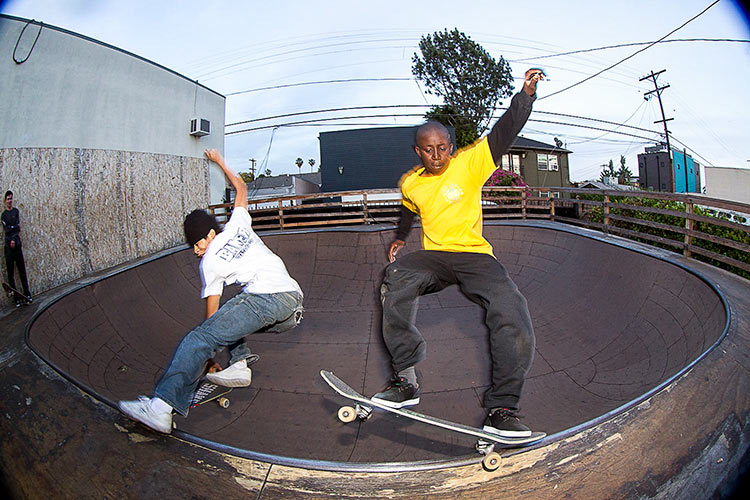 They were bros before Baker     Photo: Karpinski

How long were you filming for this part?
D: Since Andrew said we were going to put it out. I think about four months.

Have any of you ever filmed a video part before?
D: Nope.
Z: I had a little web part a while ago but not really a part.
K: Kind of. 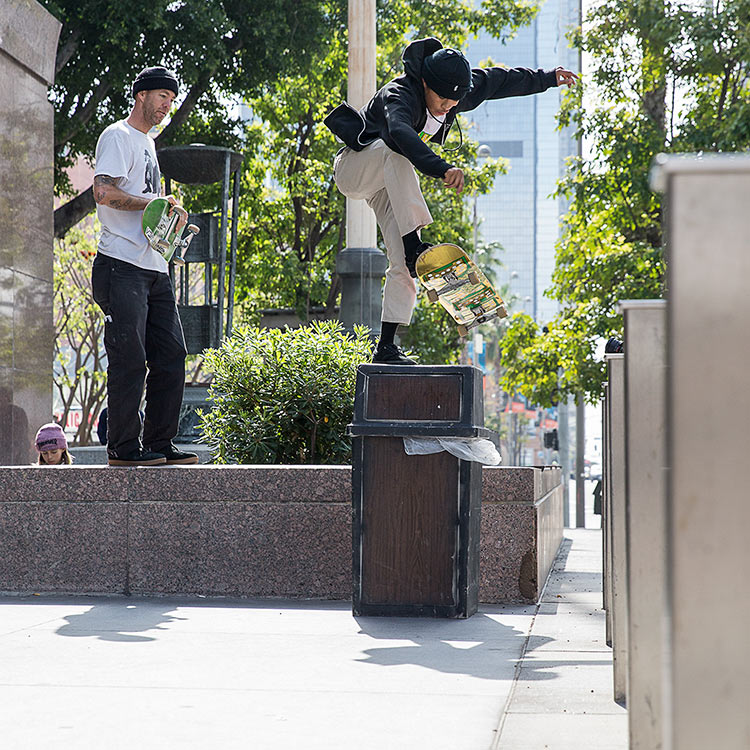 Seems like all three of you have at least one of them in your part? Who started doing them first?
K: Andrew told me Brian Lotti was the guy to do them first.
D: I’m not really that hyped on them. I only did one.
Z: I had to learn them playing Kader in SKATE. He makes me want to do them, though.

Zach, between your set up and your bag of tricks it looks like you time traveled back to the early ’90s. What videos have you been watching?
Z: I’ve been watching the H-Street video Hocus Pocus a lot. Then I always love to watch old Gonz footage. Video Days is the best. I just like watching people flow around.

Did you have like a cool uncle or someone to show you these videos?
Z: My friend Eddie Moreno turned me on to a lot of the old videos, and then Tristan too. Whenever I would stay at his house we would just stay up all night looking up old videos. 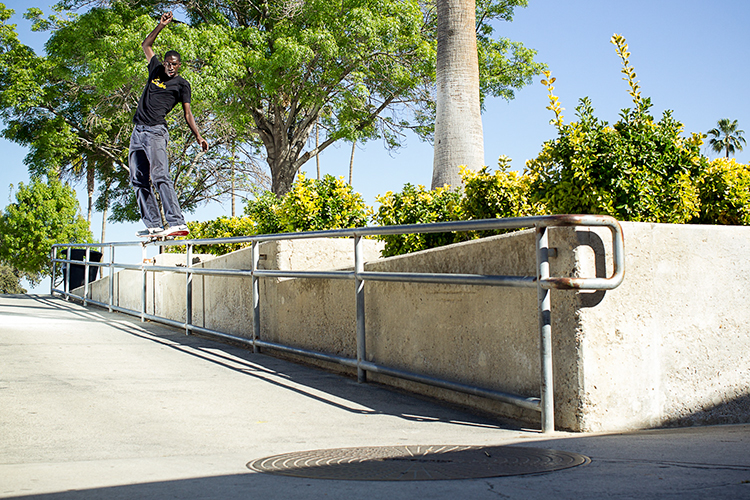 He goes the distance in more than one dimension, Donta long 50-50     Photo: Karpinski

What is the latest old video you came across that got you stoked?
Z: Probably the Tom Knox part for Santa Cruz. You know the one where fucks up the curbs and skates the barrier and his shoes are all fucked up and covered with shoe goo.

What is your set up looking like?
Z: It’s a 9” and has a square tail and a normal round nose. I brought one on an Emerica trip to Arizona last month and have been setting them up since. I love the square tail, though. It’s perfect for so many tricks.

Have you guys gone on any Baker trips yet?
Z: I’ve been on a few so far. We all went to SF last week and before that there was a small one out to Phoenix Am and then the Tampa trip.
D: It was my first time ever going up to San Francisco. That shit was tight. The people were so nice up there. We got to go to hit Deluxe, these fools smashed on Double Rock and I got to check out the city. I’ve been wanting to go up there for a minute.
K: Double Rock was fun. 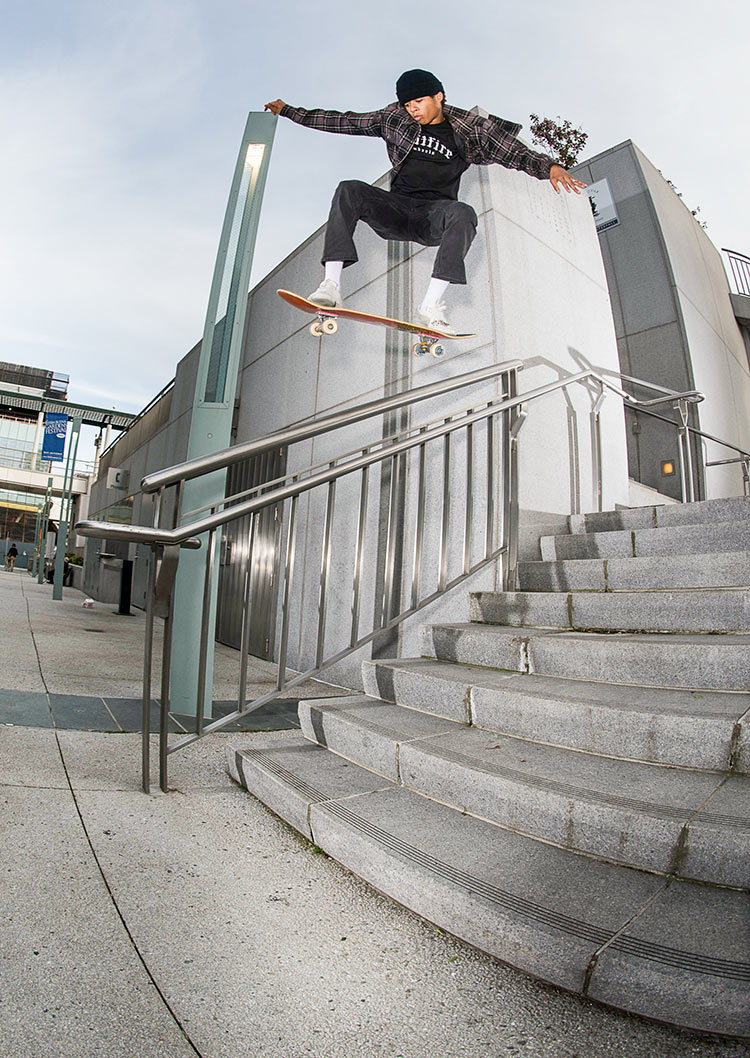 Did you guys ever make it in the Skate Tank?
D: Yeah, I made it in a few times.
Z: T-Funk brought me on a few missions back in the day.

Donta, for the longest time I’ve heard you say that you are too tall to sack a rail. But what happened recently?
D: Yeah, it only happened ’cause of the trick, though. If I am standing up on something and shoot out that shit ain’t going to happen.

How tall are you?
D: Six foot six.

And how long have you been training as a boxer?
D: In a legit gym with a trainer has only been two or three months now but I have been messing around at home for years.

What is a typical day like?
D: Wake up at, like, six and head to the gym. I’m normally in there from seven to nine hitting bags or working on my footwork. Lots of jump rope too. Then I get out and have the whole day to go skate.

Who would you be most worried about in the ring on Baker?
D: Probably TK. Terry is a beast. 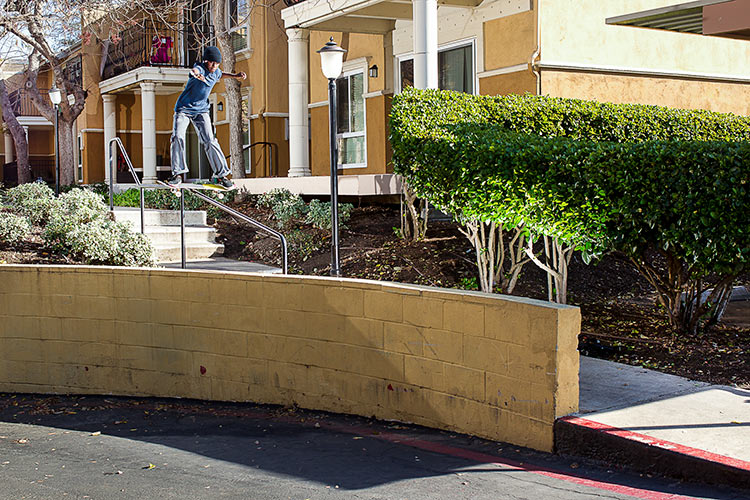 What’s next for you guys after this video?
K: I’ve been coming to Long Beach and skating with Bucky and Miner a lot. I would be stoked to work on a part with them.
D: Straight into Baker 4.
Z: Yeah, Baker 4 is coming out in 2019.

Are you guys all going to have parts?
Z: Yeah, all three of us are going to film as much as we can in the next two years.
K: Zach is going to have the best part.

Okay, last question: why is it so damn important to always have a beverage while eating?
K: Donta is fake for that.
D: I mean, I didn’t come up with it or anything but my homie used to call me out when that shit was first starting to come around, and the more I think about it the more that shit grosses me out. Why would you eat a meal with nothing to wash that shit down with? It just doesn’t look right to me anymore.
Z: Didn’t you get caught recently?
K: I saw that video. You were eating a slice of pizza.
D: I did, I did. But look, though, you don’t grow as a person unless you take some Ls. So I accept my Ls.