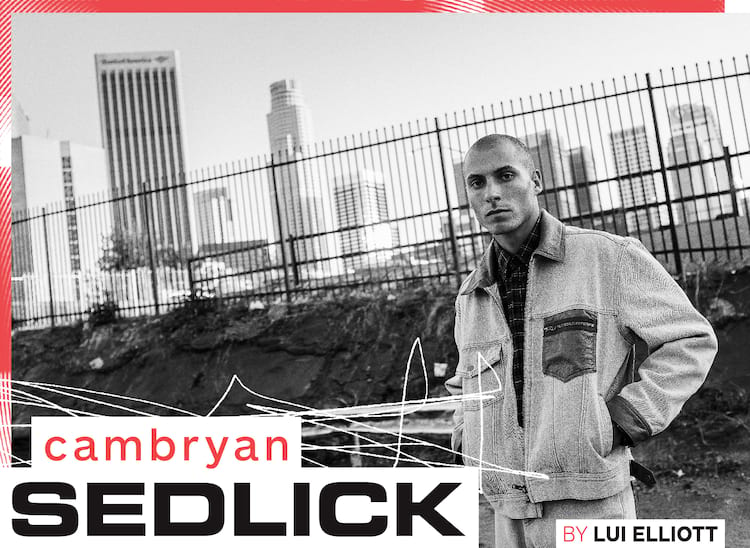 I think I’ve told you this before but I haven’t seen anyone with your first name before.

No one ever pronounces it right, maybe one out of every 100. You pronounce it Cam-bree-an. It makes sense once you hear it but if you don’t you think it’s Cam-bry-an. I don’t know how my parents came up with that one. I think it might be a biology term.

Am I supposed to say where I grew up?

Yes. What the fuck do you mean?

I just never know how to answer that question. I don’t know if I’m supposed to say where I was born or where I grew up.

Okay, let me revise that—where were you born and where did you grow up?

I was born in Dallas, Texas, grew up in Phoenix, Arizona, then moved to San Diego when I was in eighth grade. I lived there until I was 18 and now I’m in LA.

Did you know everyone from Dallas is stupid good at skating? Sean Greene is from Fort Worth.

It’s crazy. I know about Keegan McCutchen and those guys but I didn’t realize Sean is from there as well.

Sean is a back three guy too.

Fuck yeah he is. 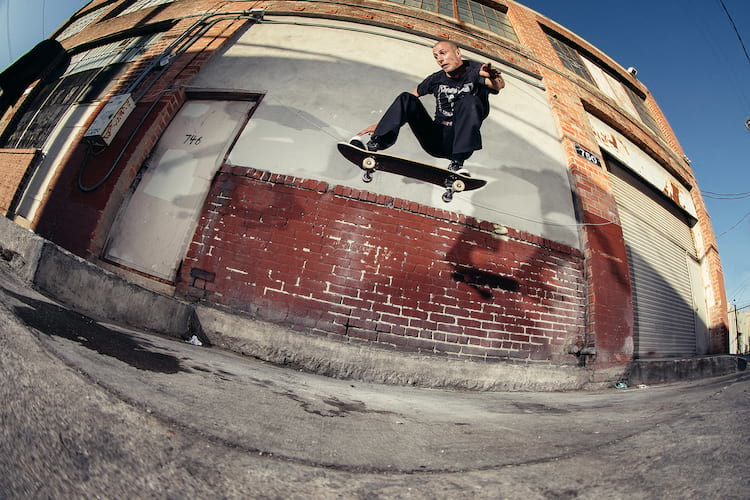 Where did @thatoneback3kid name come from?

There’s that one guy on Instagram and his handle is @dudedrinksonebeer. I wanted to make it @dudedoesoneback3 because anytime someone would introduce me they would always tell the person that I was the kid who did the back 360 on the 18 stair at the Pretty Sweet school. I wanted to change my handle to that but I didn’t want to rip him off so I did @thatoneback3kid instead.

While we’re on the subject, why did you try to back 360 El Toro?

I thought it was going to be comparable to the 18 stair but I was dead wrong. It was completely different. It’s like twice the height. Not actually, but it’s so much bigger for some reason. I was able to skate the 18 for a solid 45 minutes to an hour. It took 15 tries or something like that. I only stuck four of them; I was bailing all the other ones. I thought I would be chilling skating El Toro but I tried the back 360 once and couldn’t walk for months after. That shit is fucking ridiculous.

Aren’t you hyped you didn’t do it though?

Imagine being known as the kid who OD’d and back 360d El Toro. You’re that guy. Honestly, it sounds fake, something out of a which-would-you-rather-do scenario.

I’m still the kid who tried it, which is pretty bad. But since I didn’t land it it’s more forgettable, which is dope. 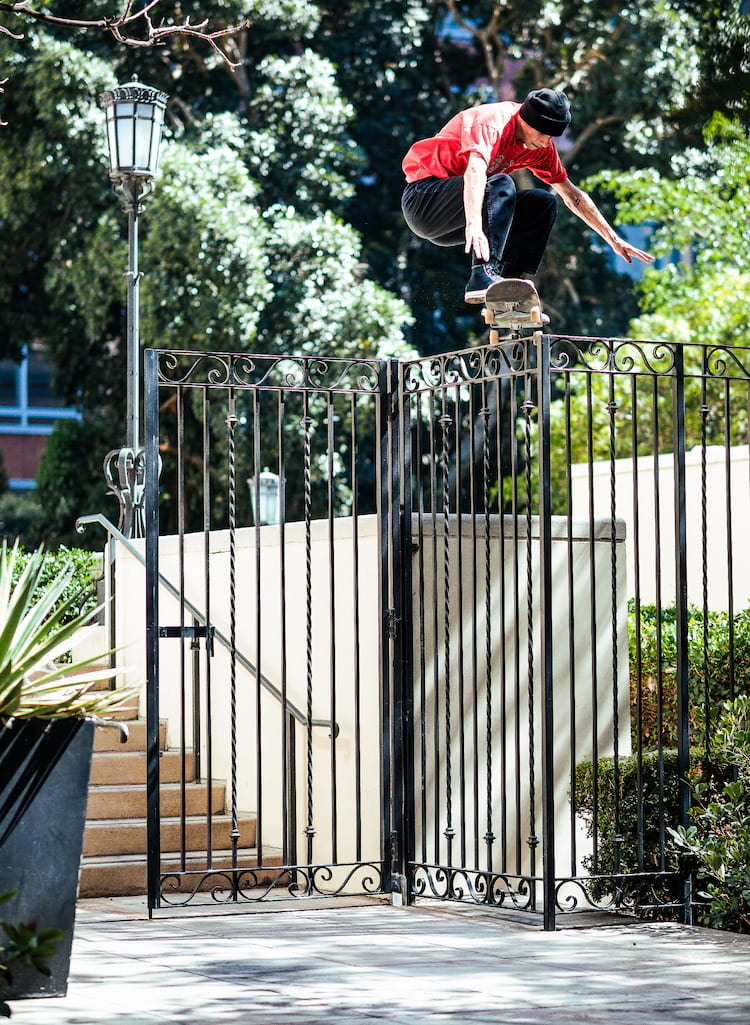 If you landed it, would it be sick or a stigma?

I would not be stoked on that now. I’m pretty sure the day I tried it is the day I met Ryan Allan. Everybody was trying to hype me up for it. I didn’t go to the skatepark and put any practice into it. I didn’t put any effort into getting ready. We just drove there and I went for it. That shit sucked; it was terrible.

Did you try to ollie it?

Yeah, I tried to ollie it four times and I kicked out three of the attempts. It was a solid five tries and I wasn’t able to walk for six months after.

I couldn’t even imagine what it feels like, trying to ollie those stupid fucking stairs and bailing.

I don’t know why I did it. I did the same thing at the Dime Challenge—I tried to do the 180 melon and kicked out half of the tries. I don’t know what it is with me and not being able to commit to shit.

When did you transform from the kid who jumps off of everything in San Diego to looking like every person who wears Dickies and Converse?

That’s a good one. I don’t even wear Dickies so that doesn’t apply to me.

Yes, you do. What kind of pants do you wear?

That is the same fucking thing.

Yeah, I don’t know what made me change. I think I fucking hated San Diego and didn’t like that side. I was colorful; I had pink pants. Do you remember that? That’s around the time I met you.

Pink pants, bleach-blonde hair with a pink hat and shoes to match.

You wanted to be different so bad.

I was when I was younger. I still try to be a little bit but it’s harder these days. 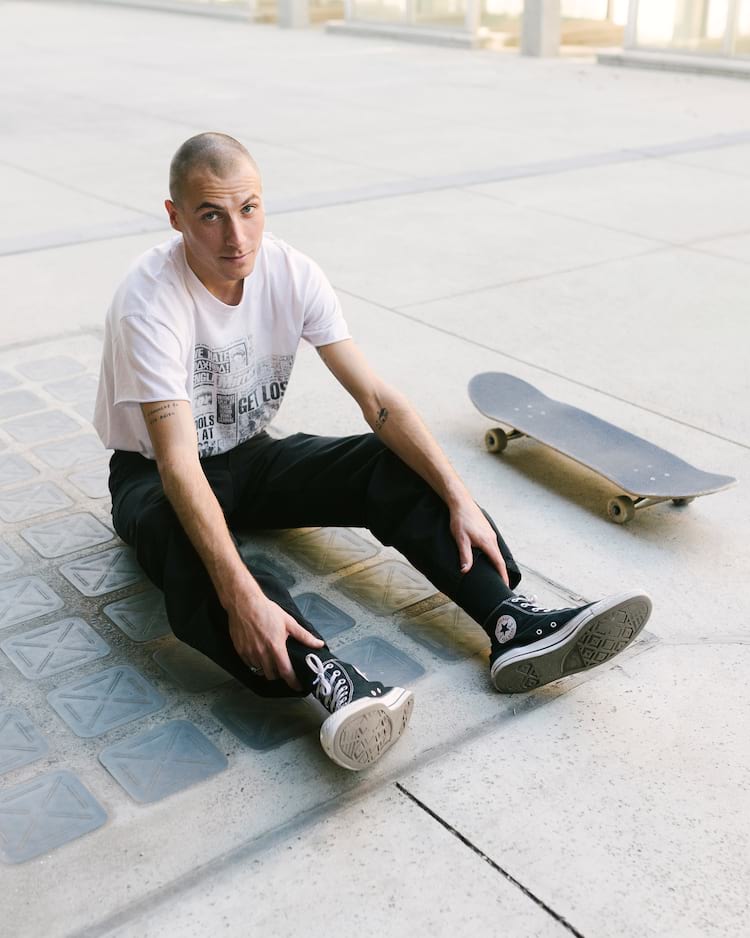 You look like every European who wears a tank top and Dickies—Tolia, Remy, all those dudes.

I just got asked today if I was Tolia’s brother.

Yeah, but I also look nothing like him, though.

If you wanted to Send Saturdays down some cooked-ass set of stairs, you could still do it, can’t you?

Oh yeah, fully. I pick and choose my battles now, especially with the Converse. Couple tries and my feet are blown out.

You only wear Chucks, right?

Yes, I can only skate the non-skate Chucks. The skateboarding version is too thick for me.

You jump down 15 stairs with literally cardboard and a thick sock liner in your shoes.

I pay the price but it’s worth it for me. I would rather be able to feel my board than to be protected but have no control. When I have thin shoes, I have way more control.

Why did you grab when you did that front 180 melon at the Dime contest?

I knew if I didn’t grab I would bail. I still did that anyway.

You sent it down the stairs in those godforsaken Chucks.

Yeah, I couldn’t walk the next day. It was fucked; my whole body shut down. When we got home, I couldn’t move anything on my body and I had to walk around Montreal with Ryan to shoot stuff for Fact. I haven’t been in that much pain in so long.

Did you just randomly fly out or did you get invited to skate that?

I think I got invited. I met Josh from Dime with Ryan one day at lunch and I think that’s how it happened.

You did exactly what Dime had probably hoped for—the random kid pulls up and focuses himself down the stairs.

I was kind of bummed I tapped out early.

You jumped down the fucking stairs and landed a trick. I don’t think that’s tapping out early.

I think I could’ve done more but my feet were pretty blown out.

Did you know you have a slight lisp?

I’ve always wondered about that. I feel like I have a stutter. When I talk too fast, I can’t get words out. I’ll sit there for a minute and not be able to say the sentence I’m trying to get out. 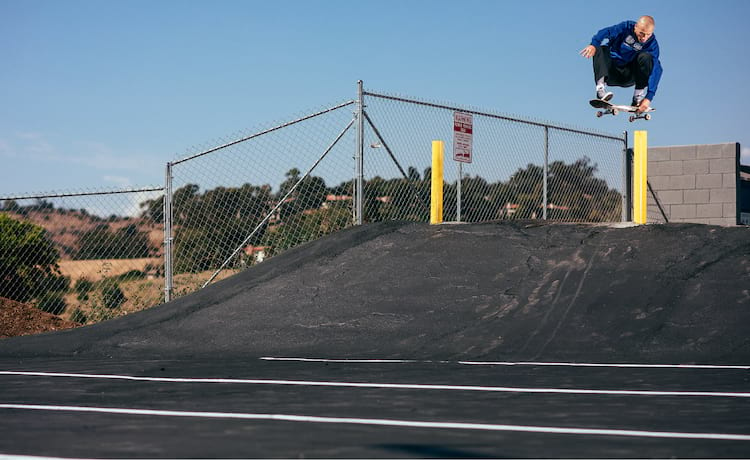 It’s fun to be different, like having a Russian board sponsor, for instance. Pole jam to tuck knee            Photo: Le Gall

I talk like that, too, but I mean with an actual lisp, where your words sound funny.

I never noticed that but now I have. Thanks.

I have a speech impediment where I jumble up words and fuck up a lot of jokes because of it. I get too excited and can’t properly talk.

Me too. I always do it when I start laughing in the middle of the joke and my voice changes and cracks. I still have voice cracks.

I just started so my voice is always cracking.

I just turned 20. Almost there, one more year. Puberty is pretty dope.

You do all this weird-ass shit and think, Why did I just do that? You pull all these angsty moves, say dumb shit just to say anything and, of course, try to say whatever to girls.

I try to control what I say because I have a lot of stupid thoughts.

You’re telling me, king of the dickheads. I mean, you’re around me when I start spewing off stupid shit.

But that makes you you. It’s sick. 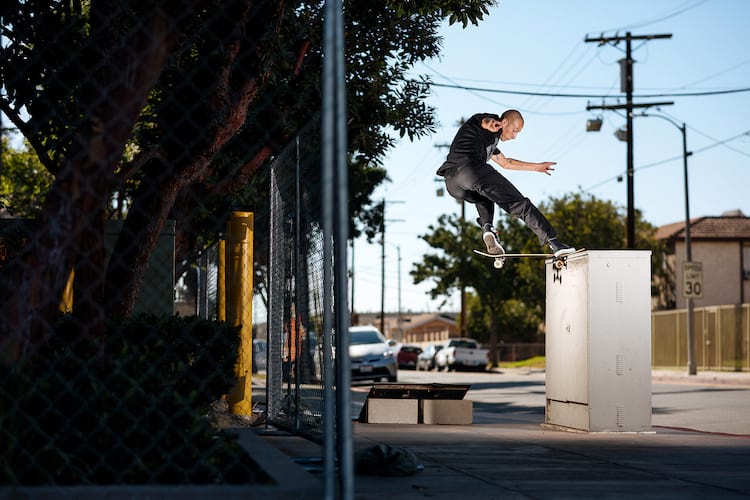 He may have stupid thoughts, but this isn’t one of them—bump to front nose, it’s all in the toes       Photo: Le Gall

You’re a sweetheart, Cambryan. You’re 20 years old. Your career is starting to take off. What do you hope to achieve?

To make a living out of it, being able to travel to places I would have never gone otherwise, I want to keep doing this and making rent. I would like to eventually be able to get a savings account going. I want to put my time into skating as much as I can.

That’s such a genuine and normal answer. You don’t want to do copious amounts of cocaine off of boobs in the middle of a foreign country?

What would you like to avoid? What do you see as being the biggest nightmare, the poster child of someone you don’t want to end up like?

Maybe not in the way you’re thinking but someone like Micky Papa. He’s so fucking crazy. It’s not my thing but I’ve watched him skate the park and do fucked-up tricks. He doesn’t get anything. Putting in the effort and not getting anything in return. There’s a full list of people that that shit happens to but he’s at the top of my list.

That’s the most respectful way you could go about that. Is there anything else you could tell me so you don’t come off as some regular-ass skater from San Diego who’s trying to be different?

Don’t forget to tell Ryan how much we love him.

Of course. He’s a fat guy but he’s got some love. 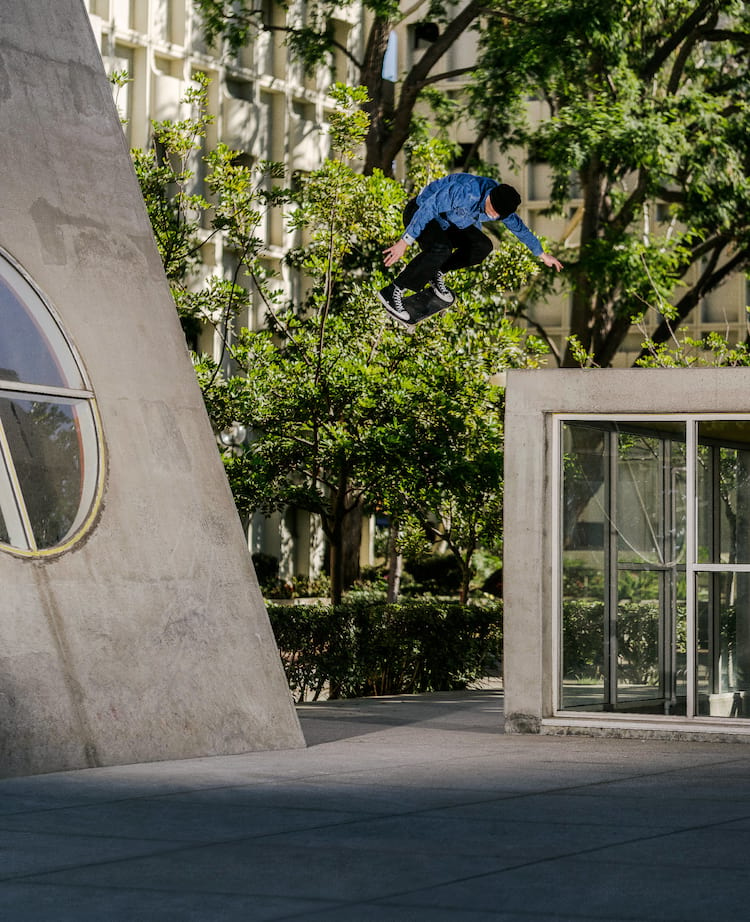 It may have started as a stupid thought, but this roof to bank ollie is actually pretty brilliant. Cheers, Cambryan             Photo: Verret