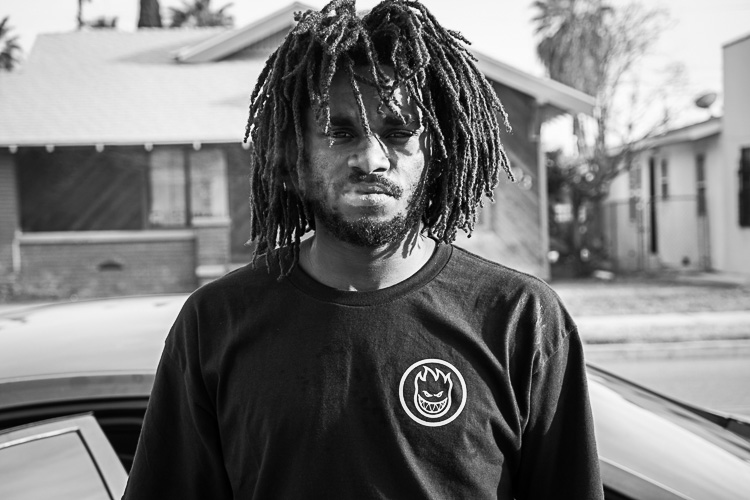 What do you prefer to go by, Cyril or CJ?
Usually CJ. Everyone I meet, at first it’s Cyril, but once they get to know me it’s CJ.

What’s your stats?
I’m 26, I’ve lived in the Bay Area, Oakland, Bakersfield and Ohio all throughout my younger years and now LA.  I did some couch surfing in SD but that didn’t last long.

Did you name him after Andrew Reynolds?
No, actually everyone asks that but when I adopted him his name was already Drew. I picked him before I knew his name. They asked if I wanted to change the name and I was, like, “No, that’s perfect.”

How often does he go on the sesh?
Probably about three-to-four times a week. Usually when I know I’m not skating I’ll bring him out. Or I just bring him anyway. 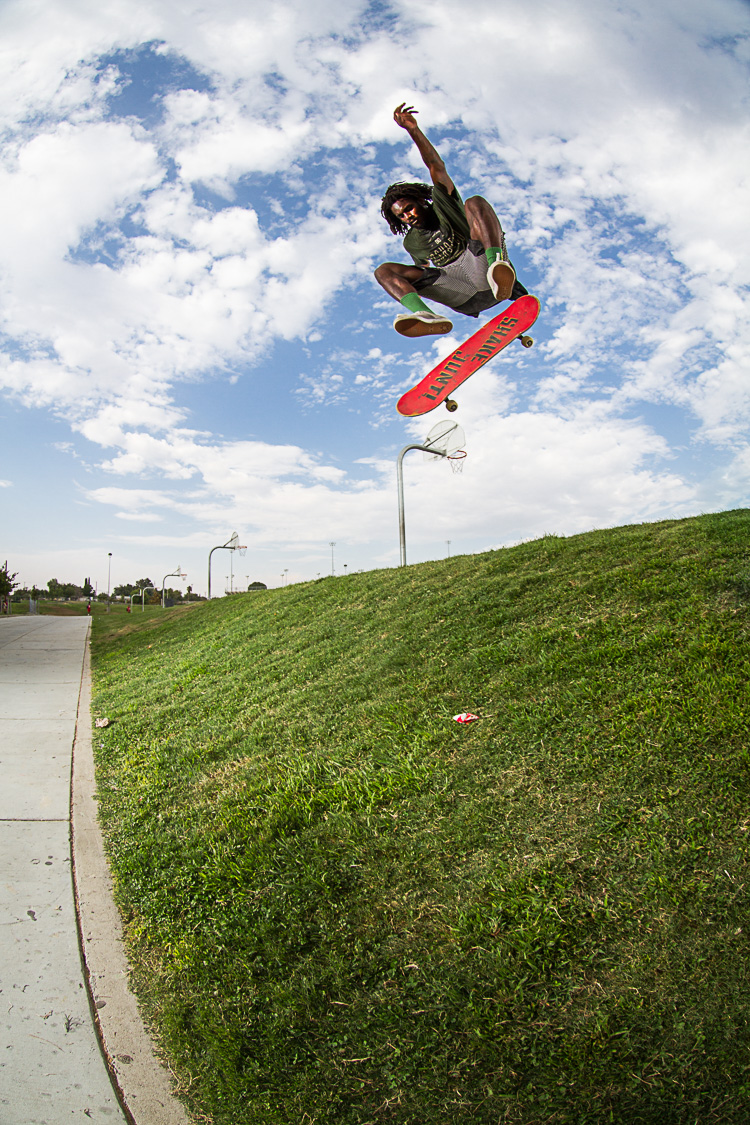 Does he ever get lost in the van? He’s a lil' guy.
Oh yeah, all the time. He mainly llkes to ride in the front with Doughnut. I’m usually in the second row. Rowing up!

What’s the longest he's has been lost in the van?
I don’t think he’s ever been lost for too long. Doughnut’s always on my case to get him out.

When you yell at Drew, does Reynolds ever think you are yelling at him?
I’m sure a couple times.

Who’s your go-to skate crew?
I usually roll out in the Deathwish van or with whoever hits me up. I don’t really have a crew.

What’s it like now that the Skate Tank is gone?
Pure driving!  There’s actually a Deathwish van now that we use. It’s taken the place of the Tank. 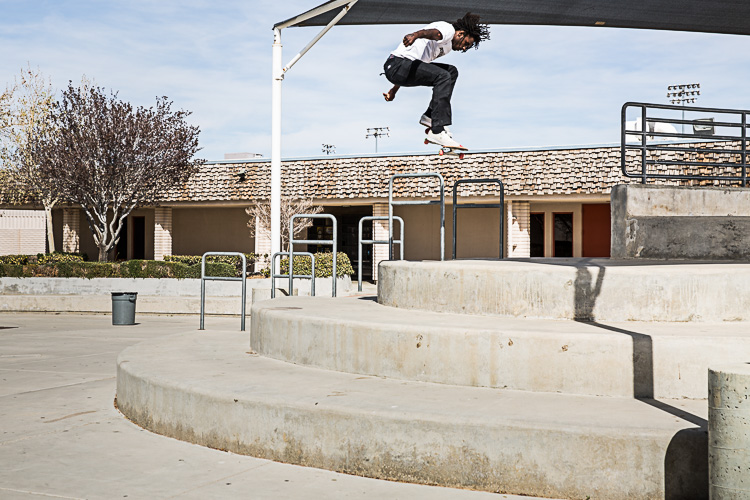 Did you film this entire video part without the Tank?
A lot of it. The stuff in Victorville that was when I first got my car. I was super psyched to drive everywhere.

Was it the end of the Skate Tank that made you realize you had to get a car?
Yeah, most definitely. I had to man up. That and the fact that I was 24 without a car, in LA.

Have you got them headlights fixed yet? That drive back from Bakersfield at night was sketchy.
Yeah, actually they went out so I had to buy new headlights and they are focused on the road now. 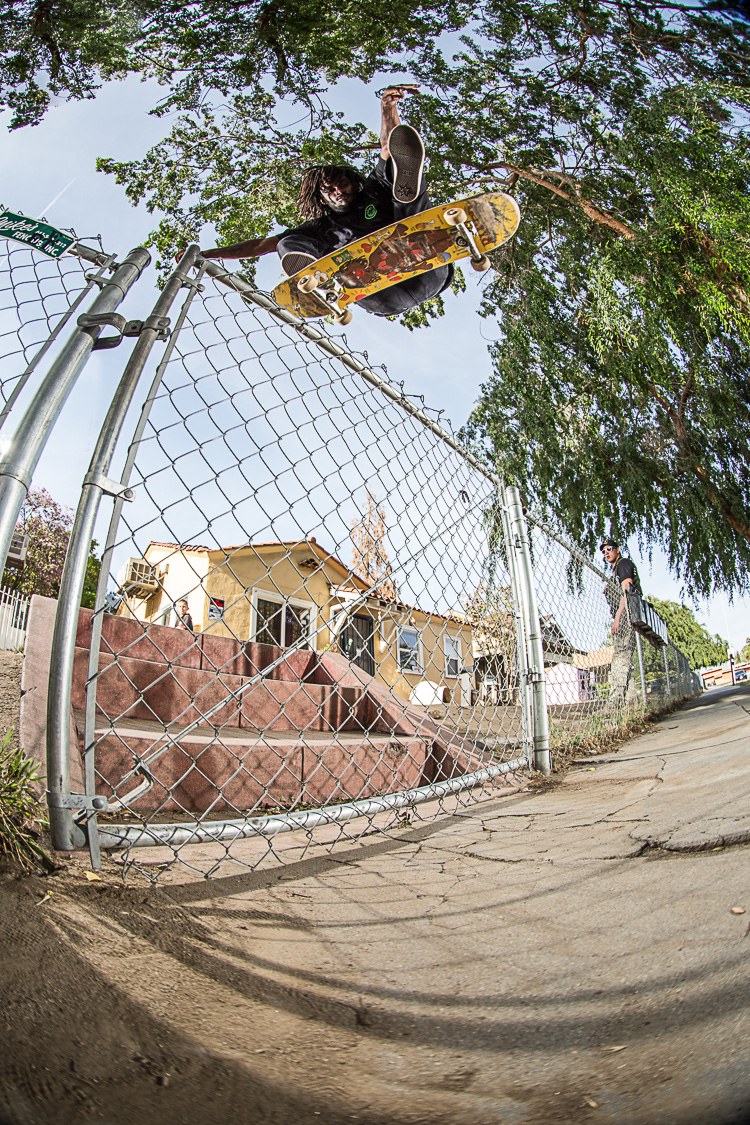 How long ago did you make the move back out West?
I think I was 20.

How did you do it?
For a while one of my close homies was out in California skating, but I had to get a job and was living at another friend’s mom’s house. I moved to Seattle after I saved up 1,000 dollars working at a donut shop. I met a homie that filmed in Cleveland and he was moving to Seattle. But once the rain started all the homies started butting heads so another homie bought me a ticket to Cali. I only lived in Seattle for three months. Pretty much from the donut shop to Seattle then to North Hollywood and I’ve been out here ever since.

How long did that 1,000 dollars last?
It didn’t last long. I pretty much bummed around and my mom would help me out. I got a job at a documenting company. Pretty much correct and scan documents on a computer. All day erryday from eight to five for about three months, but I wasn’t seeing the light of day. Then I bummed around some more and the homies from Ohio hooked it up with a place to stay. Eventually I couch surfed for five or six months and then got a job at a weed shop. I pretty much quit that once I was skating with the Baker dudes. I don’t even remember if it was DC or Baker that started paying me first but I remember I was stoked!

Do you ever miss Ohio? Do you ever go back there to film tricks?
I definitely miss it sometimes, but I’m not a big fan of the snow. But I definitely love the skate scene there.

Between DC and Baker you got a solid crew of filmers. Who filmed most of Afterburner?
A lot of it was filmed by Beagle and Doughnut. And Chris Ray came with the dope edit. 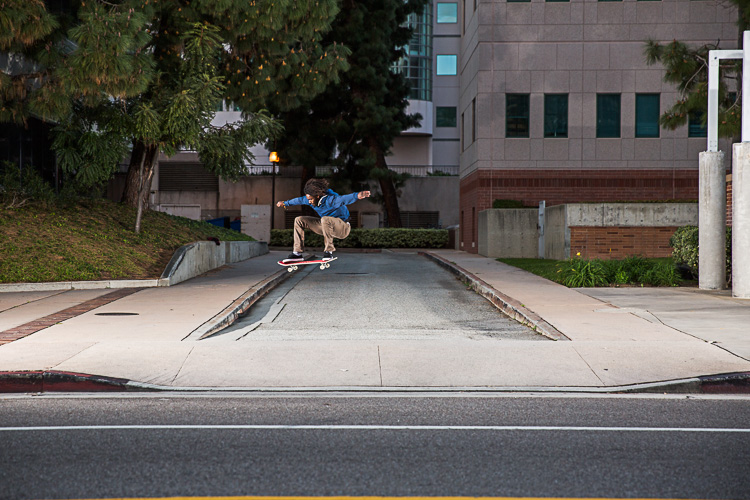 CJ ignited the Afterburner to boost this massive street gap

Who picked the song?
I’ve always been a fan of Pete Wingfield. I skated to one of his songs before, “18 With a Bullet” in Bake and Destroy and I’ve been wanting to put a part to this song “A Whole Pot of Jelly (For a Little Slice of Toast)" for awhile.

So this video Afterburner is to hype up a Baker/DC collaboration. What can you tell me about the product?  What is a deconstructed hat?
It’s some slip-ons, a windbreaker and a hat. Everything is pretty dope. T-Funk grabs the windbreakers. I don’t wear hats. T-Funk might have to answer that one too.

Who do you room with on a DC trip? What about on a Baker trip?
DC, usually T-Funk, Wes or Evan. Most of the time T-Funk, so he’s the guy on Baker trips.

A while ago, TMZ or some shit posted you skating the Hollywood High 16 but said it was Chief Keef. Is that the only time you’ve been mistaken for Chief Keef?
Yup, the only time. I loved it!

Would you ever take their advice and hit up Justin Bieber for skate lessons?
I would love to, for sure. Why not? I’m actually a fan. He’s got some bangers, for sure. 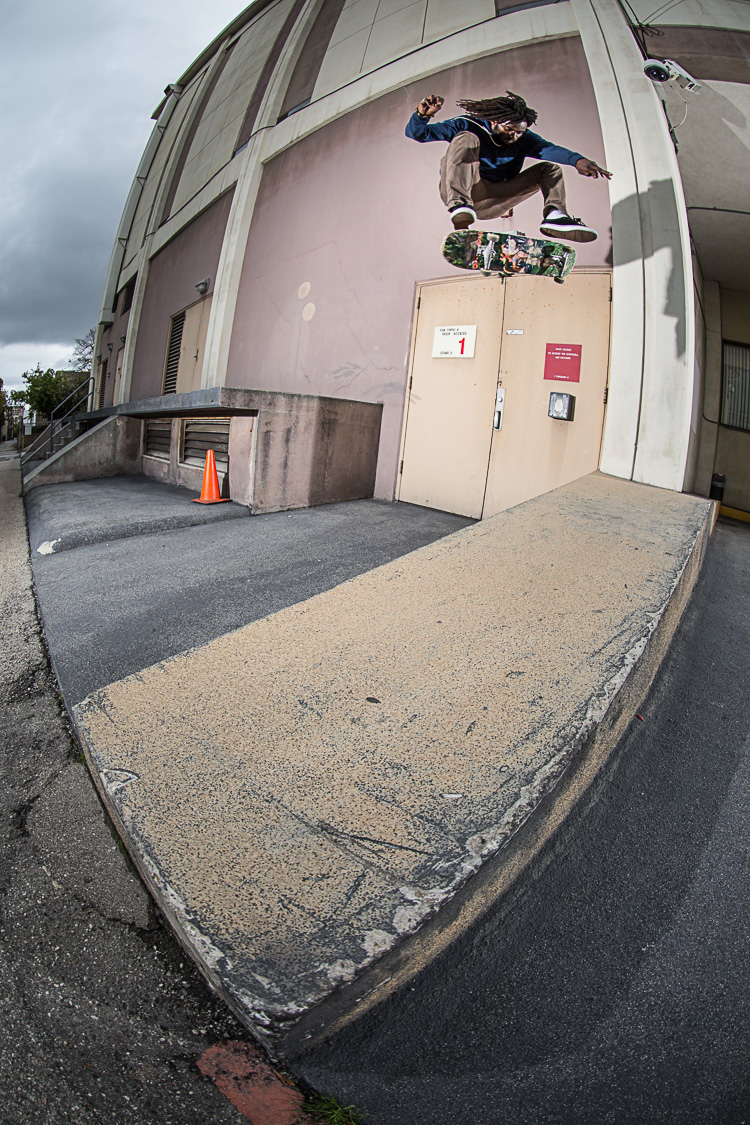 Switch frontside heel at a gap Bieber would never step to

So it’s Baker week on Thrasher’s website. Have you watched the Baker Ams video? Which of the new Baker kids are you hyped on the most?
They all are the fuckin' shit. Different personalities, different styles, all those dudes rip.

Is Kader always funny?
Yeah, every time I kick it with him he gets into something funny. It’s dope. He’s a classic little kid.

Do you feel an obligation to show them the ropes or does Drew have that all covered?
I think Drew has that covered and I’m just doing my part.

What’s next for you? Any big summer tours?
Not sure. Whatever. Wherever the board takes me.