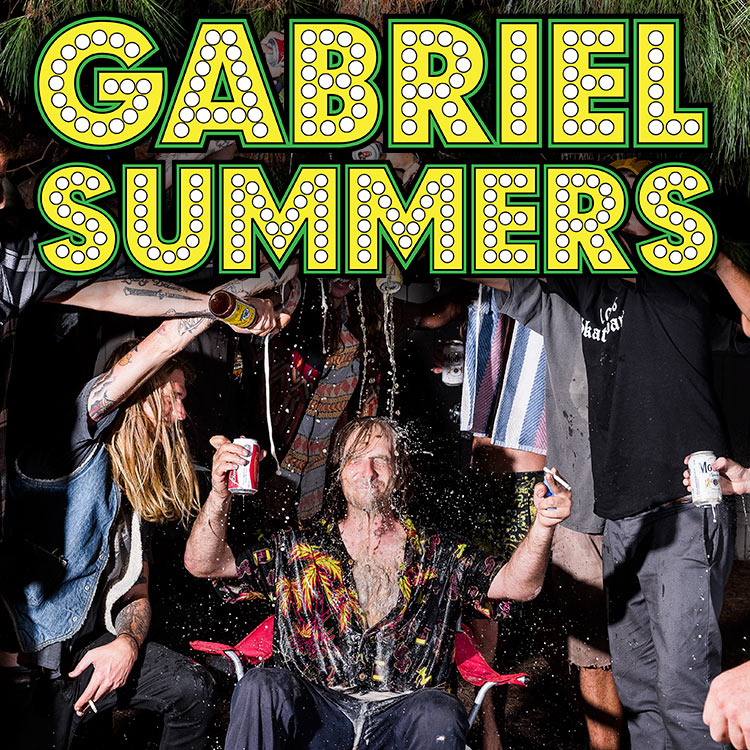 So, I’m a geography-challenged American and just found out last night, while looking up things to talk about for this interview, that Tasmania is its own island.
What! Fuck off. You didn’t know that?

I thought it was just some Mad Max town in the middle of Australia. What was it like growing up there?
It was good. I am sure it wasn’t you’re typical upbringing but I loved it. I lived in the middle of nowhere until I was around ten or 11 where we didn’t even have paved roads yet. Lots of wilderness. It was great.

What town did you grow up in?
Believe it or not I grew up in a town called Penguin. It’s right on the coast. It’s a really nice town. Not too much going on there. Pretty much just one main road but we do have a giant sculpture of a Penguin. So that’s our big attraction. 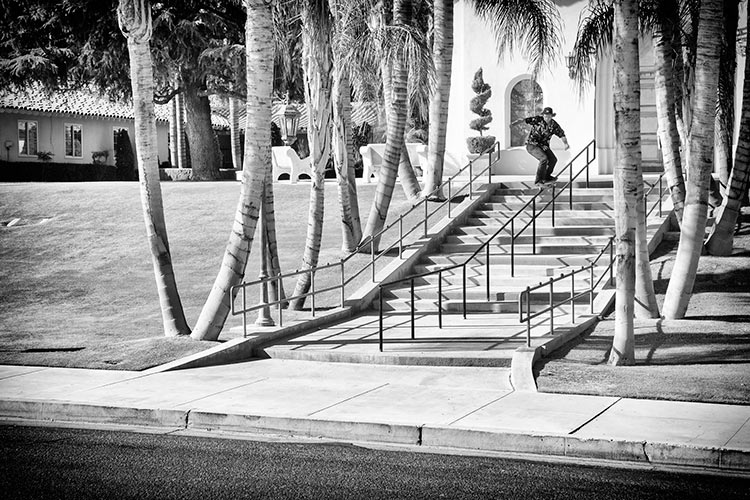 Are there any penguins?
Oh yeah, a ton.

What about Tasmanian Devils?
Yeah, Heaps of them. They make this really, really creepy sound. Like something out of a horror movie and they used to always be outside my window growing up and would scare the shit out of me.

Sounds wonderful.
I guess they are about to go extinct because they have some cancer-causing STD and it has been spreading through all of them. Scientists have been kind of stressing out hoping it doesn’t mutate into anything a human can catch because it would be the first contagious cancer.

So how the hell did you get into skateboarding?
When I was 13 this kid I went to school with, his older brother skated and had a VHS copy of Baker 2G. I never saw anything like it and was instantly hooked.

Were there any skate shops in Tasmania? How did you get your first board?
There was a surf shop that had a few boards for sale but we didn’t get our first skate shop until years later.

What were the spots like?
As you can probably tell by the way I skate there were a lot of handrails. Pretty rough spots but there are some gems there. The Vans team has come to Tasmania before. There are definitely things to skate there.

Have there been any pro skaters to come out of Tasmania?
Never.

How far away was Melbourne?
It was about an hour flight away.

When did you start skating out there?
Well, it was too much of a hassle so I didn’t skate Melbourne until I moved there when I was about 19.

Is that when you went to culinary school?
No, that was all in Tasmania. I went to the culinary school from 15 to 19 and then moved to Melbourne after I graduated.

Did the degree come in handy getting jobs?
Yeah, I worked in a couple kitchens but then started getting sponsors and traveling a bit and just wanted to see what I could do with skateboarding. I really liked working in the kitchen but it took up too much time and there was no way to do both.

You have been all over the place this past year. Do adidas and Rvca hook you up with a travel budget?
They definitely help out when they can. Other times I just got to make it happen on my own. Either way I just love to travel and check out new places.

What’s the Melbourne skate scene like these days?
It’s great. It’s thriving. So many good skaters coming out of Melbourne at the moment. I will say the one down side is that we just lost Lincoln Square. The Mayor really dicked us over on that one. There were never any problems or complaints and we really turned the park around from the homeless hangout it was. I guess he would rather see junkies shooting up in the park than people skating.

How did you meet Dustin Dollin?
Well, that Vans trip I was telling you about when they went through Tasmania, I had already moved to Melbourne and had never met him but my friends were showing them around. I think everyone thought it was funny that every spot when they asked, “What’s been done here?” it was, like, “Well, only Gabriel has skated it.” So I guess he heard my name a bunch and I randomly bumped into him at a bar when he got back and got to meet him. He is the best. I definitely wouldn’t be doing this interview with Thrasher right now if it weren’t for him.

How did you get the nickname Gabbers?
Just my friend from back home, he said that Gabriel was too long and it just sort of stuck forever.

Okay, let’s talk about this trip to the States. You filmed the bulk of this part out here, right? How long were you in America for?
I was here for six months but I don’t think I got a single trick till about the four-month mark. I was in a serious drought for the first four months.

So you are telling me you filmed all of this in about two months?
Yeah, I’d say so. For sure, actually.

You wound up skating a lot of well-known big rails. Did you have some dreams in mind when you came out here or did it sort of fall into place?
To be honest, when I first came out I was just here for Ryan Reyes’ wedding and just wanted to see friends and skate. The nosegrind was always in the back of my mind, though. As soon as I saw Chima’s front board I knew I wanted to try to nosegrind it. So that was a dream come true.

What trick in the part gave you the most trouble?
Probably the nosegrind.

That was first try, though, Right?!
Yeah, but it took me a few times going there to be in the right mindset. That’s the only trick I was really losing sleep over. There is a 15 stair with the same size rail as the 20 one and I must have nosegrinded that 20 times the first day I went and was dead by the time I wanted to skate the bigger one.

I heard a girl took you on date to the Outback Steakhouse. How did that go?
Oh, man, I got catfished. I had a girlfriend forever and was new to the whole Tinder thing. I thought I hit the jackpot but when she came and picked me up I went to shake her hand and it was massive! Totally did not look like the photos but at that point I was already in the car so what are you going to do? So anyways, from there she took me to the Outback. 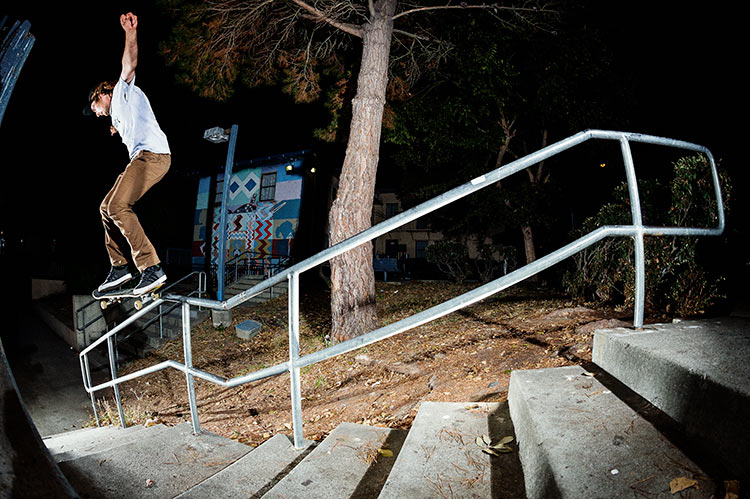 That’s pretty rad, though. How Authentic was it?
It was all just a bunch of oily crap. I don’t know what makes it Australian except for maybe them serving Foster’s.

Did you try the blooming onion? Isn’t that Australian?
Ha! I actually did have that. But no, I have never had one in Australia.

Weird. I thought that was a delicacy for you guys.
Definitely not.

Do you pick all the songs you skate to? Between this part and 5 Years at the Bottom it seems like you steer clear of the standard stoner metal or hip-hop choices.
I didn’t get to pick this new song but I have always loved ‘80s music and thought it would be cool to skate to Pat Benatar but Andrew Reynolds was the one that actually picked the song, and then when Donut started editing the video I was super stoked when I heard it.

How has it been skating with all the Baker Boys crew? You caught the final days of the Skate Tank.
It’s been a blast. Such a bummer the van is gone. Skating with Beagle and everyone is the best. So much hype on those sessions.

Do you guys do the two times handshake in Australia?
No, just in the States. Nobody really does that one in Australia.

So I just saw a Hall of Meat you had trying to skate a kinked rail in a mall. Was there a plan with that one? Where were you going to land?
You could carve it out for sure. My friend Geoff Campbell made a video called Secky Presh where it was all spots that you could only get a try or two at so, like, secky pressure. Well, anyways they skated that mall a lot in the video and I had always wanted to skate the rail. I tried it and it seemed like it could work. I even slid one to the bottom before security came but I just sort of rushed it and well—stuck. I really lucked out, though, because I barley clipped my shin on those stairs and wound up having to get some stitches. Those things are sharp, so anything more I could have been fucked. 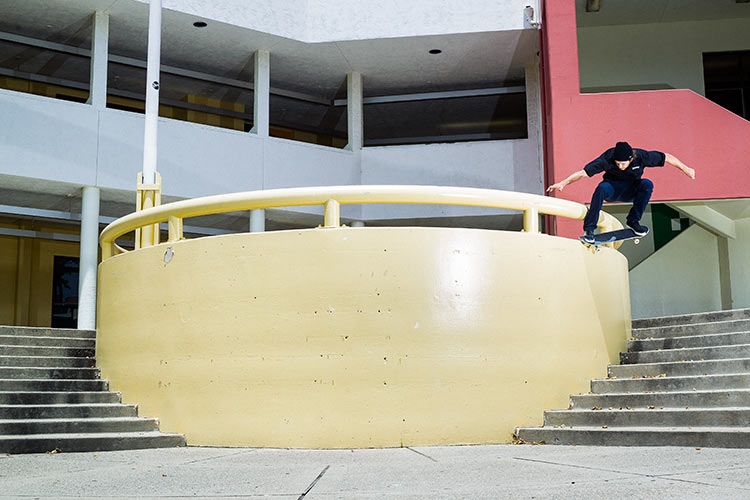 Any thank you or shout outs?
Beagle, Shane and Donut for lining up this part. adidas, Rvca, Modus, Spitfire, Thunder through Australia, my family, Dustin, and anyone who has ever let me stay on your couch. I really appreciate everyone for helping me out.