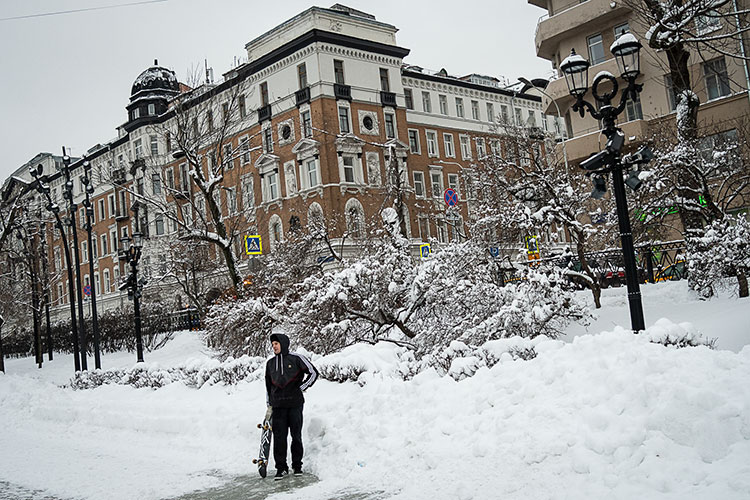  There are a lot of clichés about Russia: bears on unicycles, vodka and harsh winters are definitely a few of them. Are some of these false? Yes. We don’t drink vodka all day and bears don’t ride around on unicycles. But we do have crazy-ass winters. Temperatures can dip into the -30s Fahrenheit! The winters in Russia are very long and are inhospitable to fans of the wooden toy, so if you’re a street skater, you might want to find some other hobby for those four-to-five months of the year. Unless you’re Gosha Konyshev, that is. He came up with the idea to film a street part in Russia in the dead of winter. Sounds fun, right? The result is a part that has NBD written all over it. Not that the tricks have never been done, but nobody has filmed them in conditions like this. I hit him up to see why the hell he decided to film this part. —Vitaly Kotov 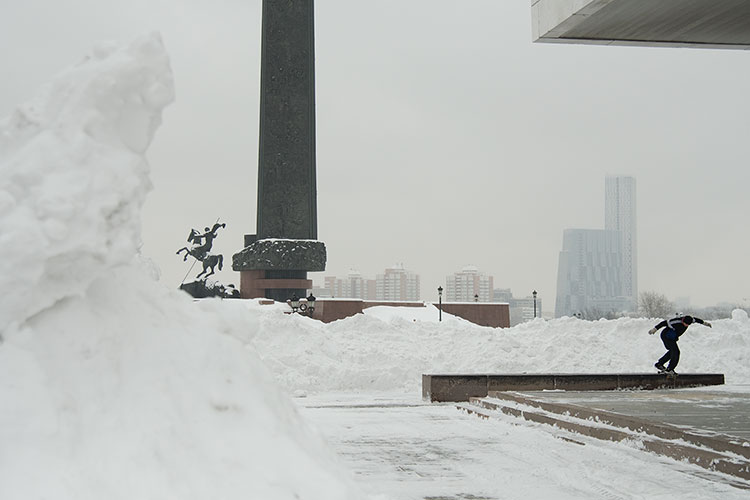 This famous spot that made it into Fully Flared is really fun to skate—in the summer! During winter it’s one of the coldest places in Moscow because of the strong winds. Gosha don’t care. Back lip

When you’re filming in the winter, are the police or security hesitant to kick you out because they don’t want to go outside?
We rarely got kicked out while filming this part. Most of the time we just had beef with local janitors that were supposed to clear the snow from the spots, because it was their task and they were trying to prevent pedestrians from slipping out. Actually, it was even worse than dealing with security because the janitors were scared of their bosses. They were worried that they’d get in trouble with snowy territory under their watch. We had our own shovels and promised to clear the spots after our filming mission but they were still worried. It was easy at night, though. At night those dudes were on the lookout, watching the cameras, dressed in their warm uniforms, chilling in their cars with the heater on. 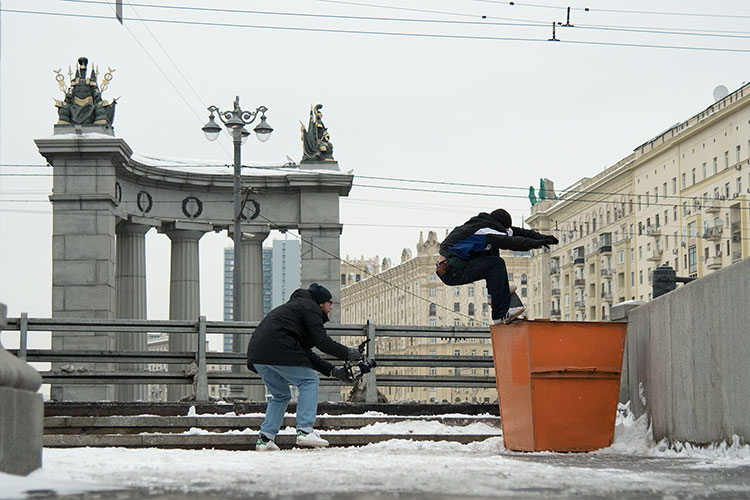 This orange container holds sand and drivers can use it to get up icy hills. Gosha found another use with this frontside nosegrind

Why not just snowboard?
I actually did it this winter but I got bored quickly—I’m going down the hill, landing couple of tricks and don’t really see any place for progress there. Also, I need some practice on a skateboard. For example, I can’t land a proper impossible and to learn it I need 1,000 tries to really feel that trick. I don’t really care if I go for it on the wet asphalt, snow or in the cold underground crossing. And I just love to push in the city center. A few years back we got a renovation in town and now we have some really nice sidewalks.

Do ledges need wax when there's ice on them?
Sometimes ice could crack and stop the board from sliding. I was clearing ice from the ledge and waxing it all over again. My goal was to get a perfect grind or slide every try. I was too lazy to warm up and wanted to get the trick asap so we don’t spend to much time outside because it’s so cold.

Do you ever actually warm up when you're skating in -30 degree temperatures?
I tried to warm up before leaving my house. At the spot it was hard to warm up because there is no place for it. It’s snow all around you. I was well dressed: two pairs of socks, two pairs of pants, two jackets and gloves. With that outfit I could try tricks as much as I wanted to. Having all those clothes on you is also like having full-body pads; you aren’t afraid to bail.
  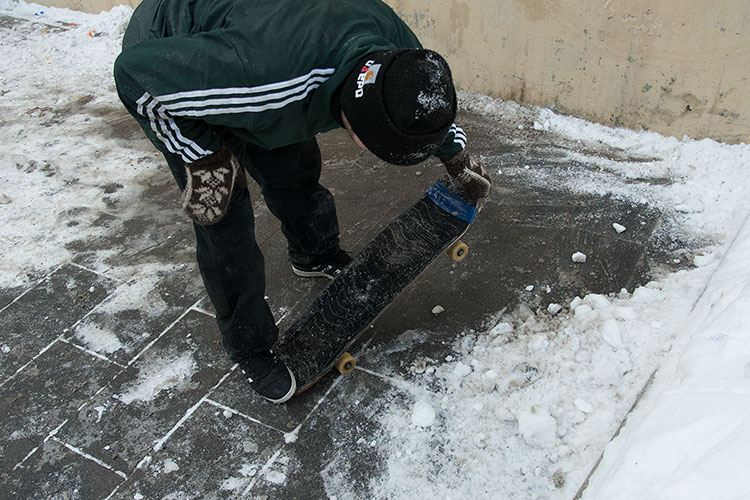 Three days of filming, three broken boards and pair of “babushka” gloves, all for one single trick

What's up with the custom griptape you're stapling on your board at the end of the video?
When cold season came to Moscow, all my homies moved to indoor skateparks. I was still out on the streets. Once I got caught by the snow in the middle of my session and I just continued skating for the fun of it. Surprisingly, snow was not really blocking my wheels and it was not that slippery. The only problem was ice that piled up on the griptape. I was seeking a solution and remembered snowskate griptape. Those guys have been using rubber griptape for awhile and it works perfectly. I went to the local hardware store but the only thing I found there was a rubber floor mat. I nailed it to my board with a construction stapler and within three days I was riding it like regular griptape. Shortly after, I realized that I can do any trick with it.

Do you have a crew of dudes you snow skate with or do you roll solo?
In the beginning I was trying to get my friends involved, but it failed from the start. The whole project was really weird, to be honest. It was super cold outside, you need to get used to this strange rubber griptape, so why bother if you can just skate indoor with homies or find some part-time job for the winter season? When we got the few first shots I understood that it actually would be hard to bring someone in, because it’s so much work just to get one shot and if there were more people skating it would just take too much time. So basically we went solo.
  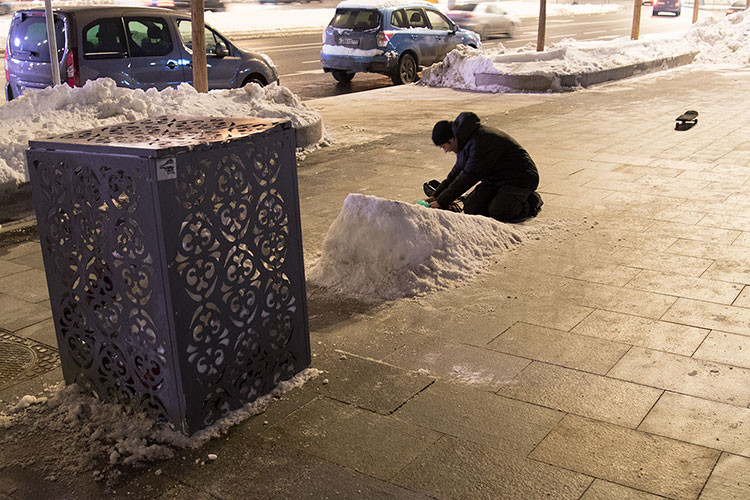 You can build a proper kicker out of several things: wood, metal, plastic, concrete. Gosha adds snow to the list
  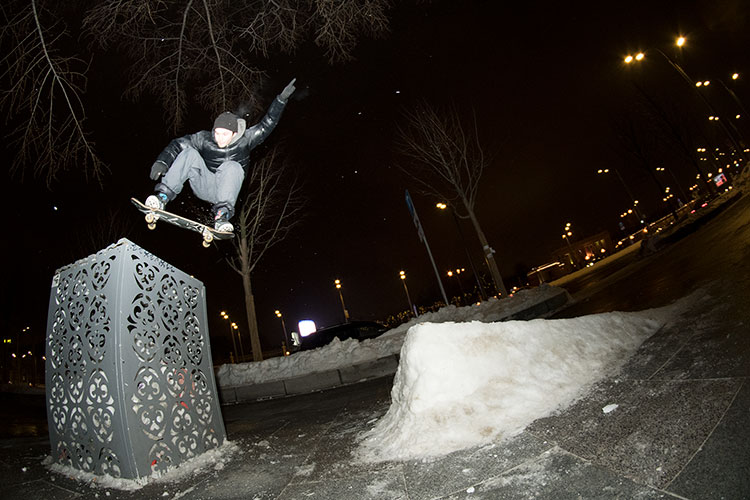 It works! Backside 180 off of Frosty’s jump ramp

Do you play any other ice sports?
No, I’m not really interested. Sometimes I go ice skating with my friends at the local park but that’s about it. 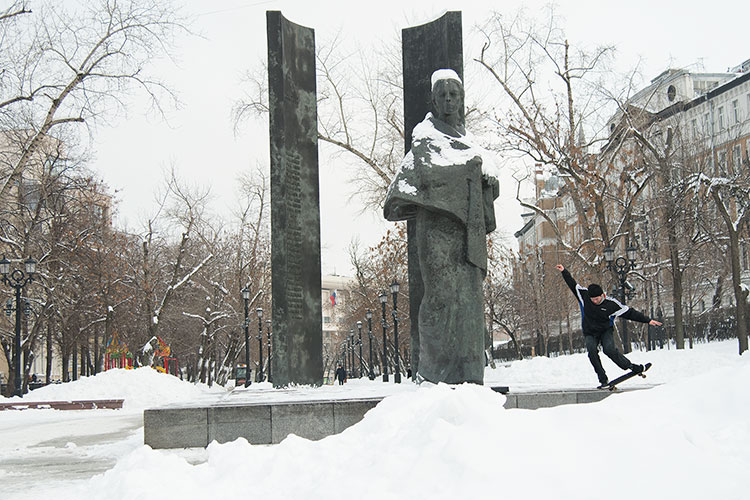 How long do a set of bearings last when you're snow skating?
I used two sets for the whole winter. I just put some motor oil on them and they were good.

How about your board?
Actually, it was not a big difference from summertime. I broke seven boards in the whole winter, including three boards at one spot. No cracks, no delamination, the only problem was that the boards would get really dirty from all the snow and dirt.

Will you continue to skate in the snow or was this just an experiment for this particular video?
If there is no proper indoor skatepark in Moscow next year, I actually will. 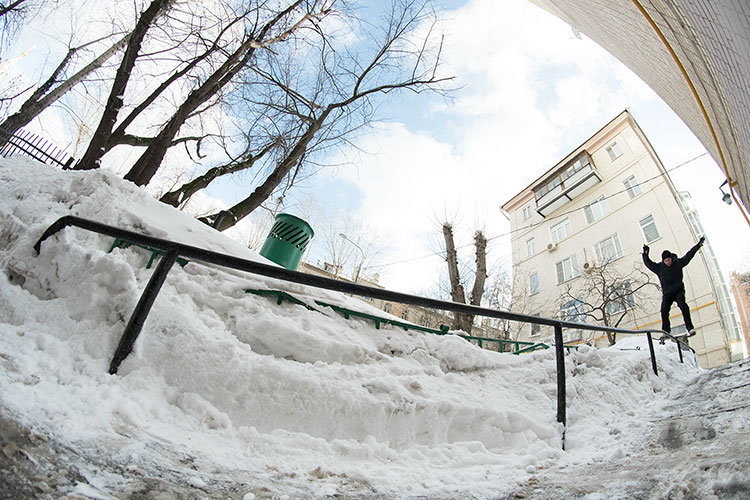 You got any advice for other people living through shitty winters?
Get warm and comfortable clothing and shoes. If you’re willing to skate outside, find a good spot and clear it for yourself. Spending more time with your friends will help to speed up the winter. But my main advice is try to change your negative attitude towards winter. Try to find positive sides in this beautiful time of the year. Nothing can stop you from doing what you love, not even a shitty winter.