How do you pronounce your name?
That's hard to say. Just think about how they would say it in Finland, maybe.

Where do you live and where did you grow up skating?
I live in Belgium. I grew up skating in my hometown of Mechelen, just skating industrial parks and a mini ramp.

Do you still live in Mechelen?
Not right in Mechelen city anymore but I'm only about 20 minutes away. Its a hole in the Earth so I'm happy to have my car. I'm planning on moving to a bigger city soon, though. Probably in Belgium. 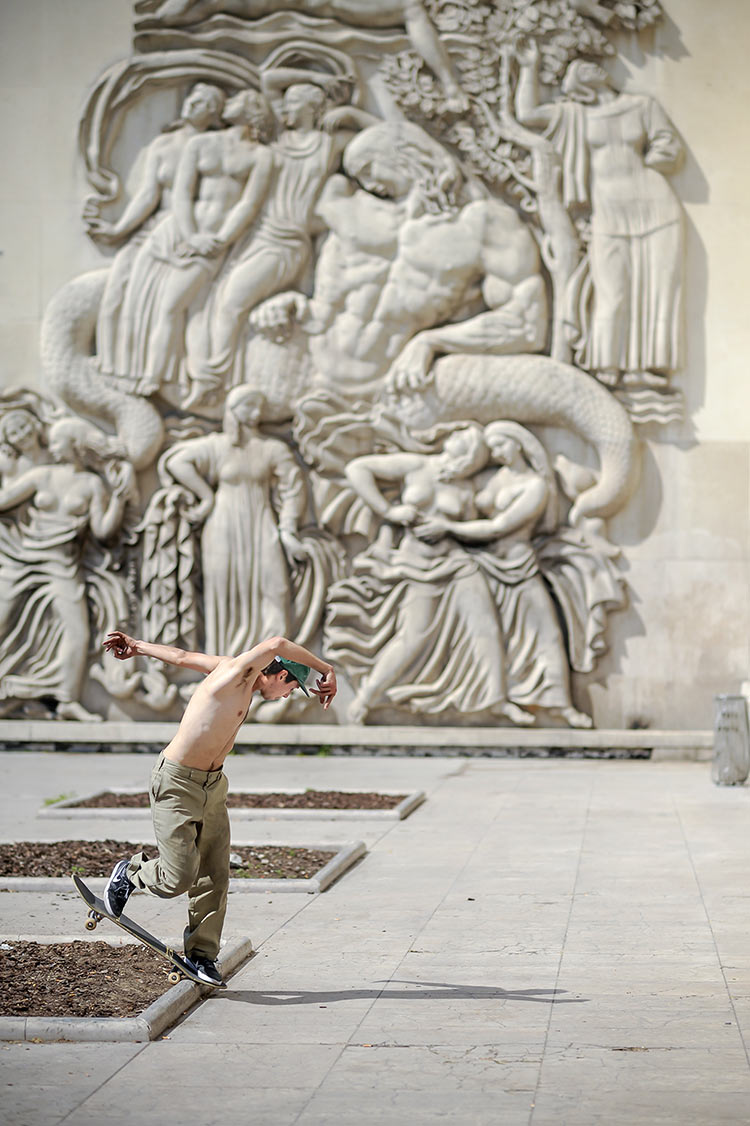 When you were younger were you more stoked on US companies or European companies?
American companies 'cause they had videos and gnarly skaters. But there were some local brands we were really stoked on 'cause it felt like they were closer to us. Especially with the skaters on the teams 'cause we knew some of them.

Was this part from a full-length video or was it just a stand-alone part?
It's not from a video; it's just a solo part. That's how it goes these days. Stoked to get some homie tricks in there, though! We made a full-length video last year with my friends from Belgium. It's called Jacky. We're gonna try to make another one again soon.

Did you grow up watching full-length skate videos or are you too young for that?
Yeah, sure. My first videos were Sorry and Mosaic. Those are still two of my favorites.

Who filmed and edited this Never Skatebored part?
Bloody French Fred! I'm honored for that. I'm just realizing that he made the first video I ever saw and now I've been emailing with him for the past month getting my part together. He made me look even better then I already look. Ha!

Do you think contemporary skateboarding has lost some of its humor? Do you think people are taking this thing too seriously?
To be honest, I don't like to watch skaters that are too serious and want it too badly. But everybody does what they want and I can't blame anybody for being too serious, 'cause I get pretty serious too when I'm trying to make a trick. But just keep having fun with it and it will last longer. 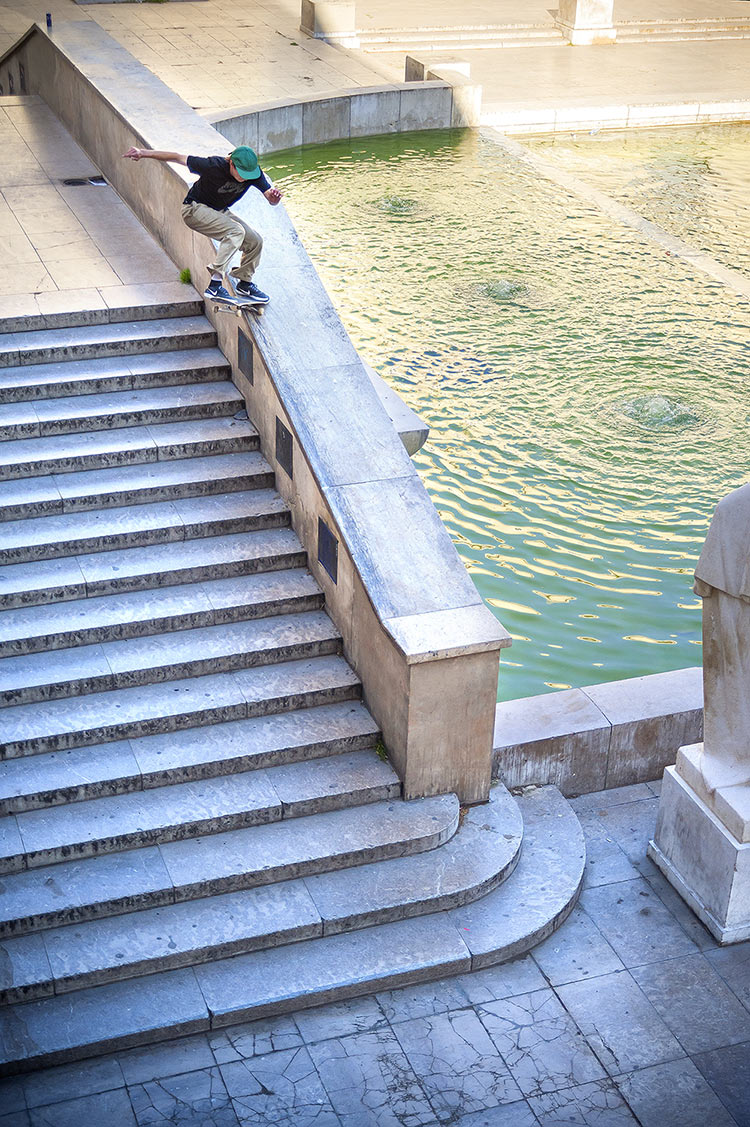 How long did you film for this Never Skatebored part?
Over the past two-and-a-half years. I went on some trips and always tried to keep my best footage for this part. The last few months I was feeling pretty good and I was stoked to get some of the best tricks for it.

Going into it, what were your expectations? Were you surprised by how stoked people were on it?
I didn't expect it to get such a good reaction. It was pretty amazing. I'm happy to bring something to skateboarding that people enjoy. I just try to make stuff that I would like to see. Of course it's not just me but a lot of good friends helping me out with this.

What trick in your part are you the most stoked on? What was the hardest thing in there?
Maybe the first ollie to fakie because I had to push so hard that sometimes I would slam just pushing. I also tore my groin because I was pushing like that for almost two hours 'cause I couldn't land that fakie flip. I came home and saw this big bump between my balls and my leg so I had to get surgery and they fixed it. It didn't really hurt but it was pretty crazy. Also, the switch boardslide Cab flip took me a long time. I went back three times for that just because I really wanted to get it and I have nothing better to do. 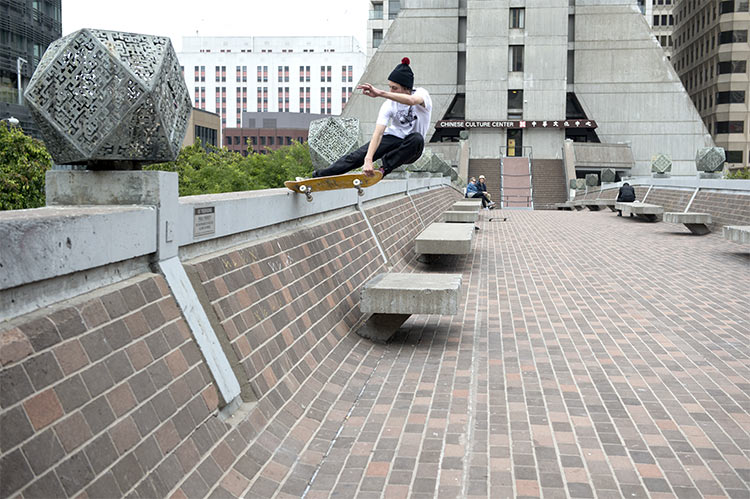 Guilt-free crailslide over the bench at China Banks     Photo: Brook

There were some SF spots in your part. Was that your first trip out there? Any good stories?
I wish there were even more! I love SF. It's the best place to skate, I think. Just skating downhill is the best thing ever. It's like the feeling you get when you try a trick for two hours and you finally make it. But it's easy 'cause you just have to ride down the hill and get the rush. The first time I came to SF was two years ago. That's when I did the crailslide at China Banks and I was stoked. But I didn't really skate the hills, just spots. Last time, like a month ago, we skated around everywhere. My good friend Bram De Martelaere was showing us around so it was the best time. A good story is maybe about when I tried that double wallride into the downhill. The first time I tried it the guy that lived there came out and saw me skating his house. He got pretty mad and told us to leave. I didn't want to, so I asked him if I could skate it if I repainted the wall afterwards. After a long discussion, it was a no. But he was about to leave so we waited around. Right when I was about to try it again he showed up going full speed in his car and parked right in front of me. He jumped out and tried to fight me and Guillaume who was filming. I was a bit over it but I still wanted to do it. We waited two hours and then went back. His car was still there and I was scared that he was going to shoot me or something from the balcony but it was good motivation to just go for it. It's crazy that you actually skate people's houses in SF. Sometimes I feel guilty about that.

Do you enjoy visiting the US? Would you be ever consider moving here?
I haven't been there too much but I always like it there. I've always had a good time, good memories that make me want to go back. I'm sure I could stay in SF for a long time. But moving there would make me miss home so I would probably go back and forth a lot. 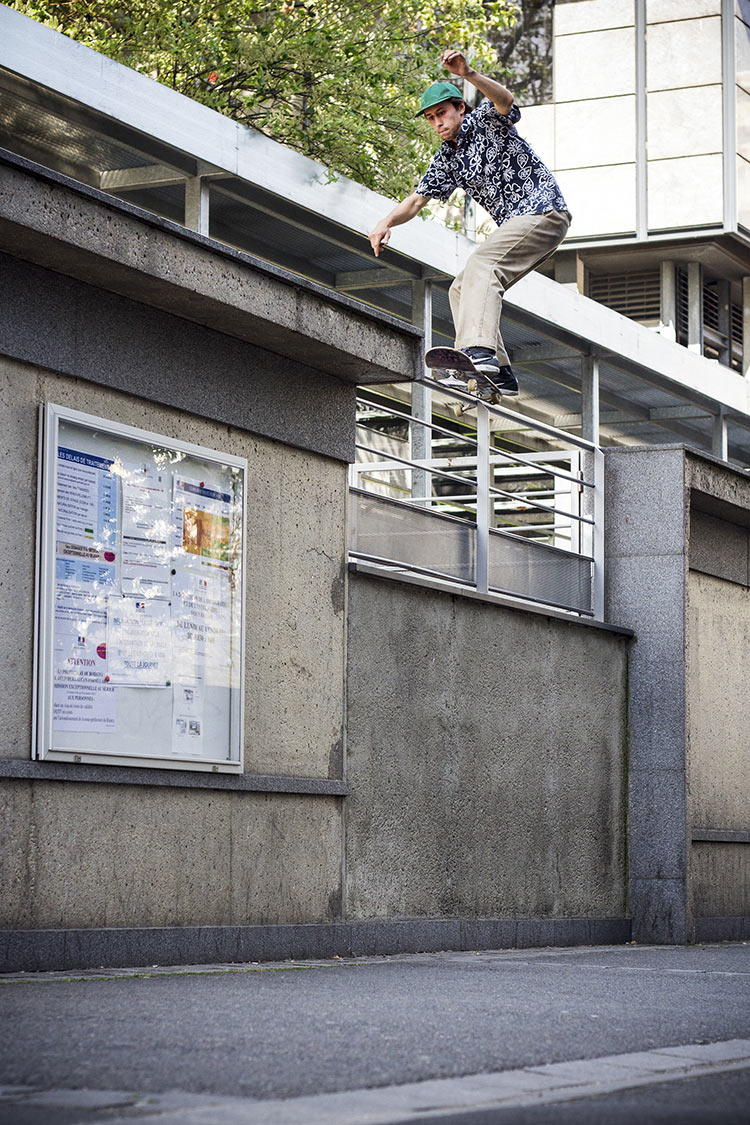 Unlike the Olympics, this 50-50 will not damage your soul     Photo: David Turakiewicz

What are your thoughts on skateboarding being in the 2020 Olympics? Would you participate if asked?
It will bring skateboarding to a giant audience and that's really sad 'cause we are not in this to be loved by the whole world. If people do it I hope they can take the piss and it will be the first and last time it's in there. Just go take the money but at least try to do something good for skateboarding. That's what I would do or I wouldn't go at all. It will damage your soul forever. Ha! But I guess it's too hard to prevent things from evolving.

Are your parents stoked on skating?
My mother always let me do what I wanted to do. She let me go on trips with my friends who were way older when was, like, 12 or 13. She trusted them. She knew there was more good to skaters than to soccer players or whatever. My dad is stoked now, too, I think. I give him shoes or shirts sometimes. He didn't talk to me for a month when I stopped playing soccer and went skating, though. That was pretty funny.

Who was your favorite skater growing up? Do you have a favorite skateboarder now?
I had a Jamie Thomas board; I was stoked on him. Watching Dying To Live: John Rattray and Lindsey Robertson. They skated to good songs as well. Serge Gooskens, Hans Claessens and Bruno Van Wilderode, they are from Belgium and they killed it. They actually still do. They shaped my skateboarding the most, I think. They were skating in the same country as me where you can't cry when the spot isn't perfect. Now I like to skate with my friends a lot when I come home from trips. Sometimes it feels good to just skate, to not film and just remember what skating is about. 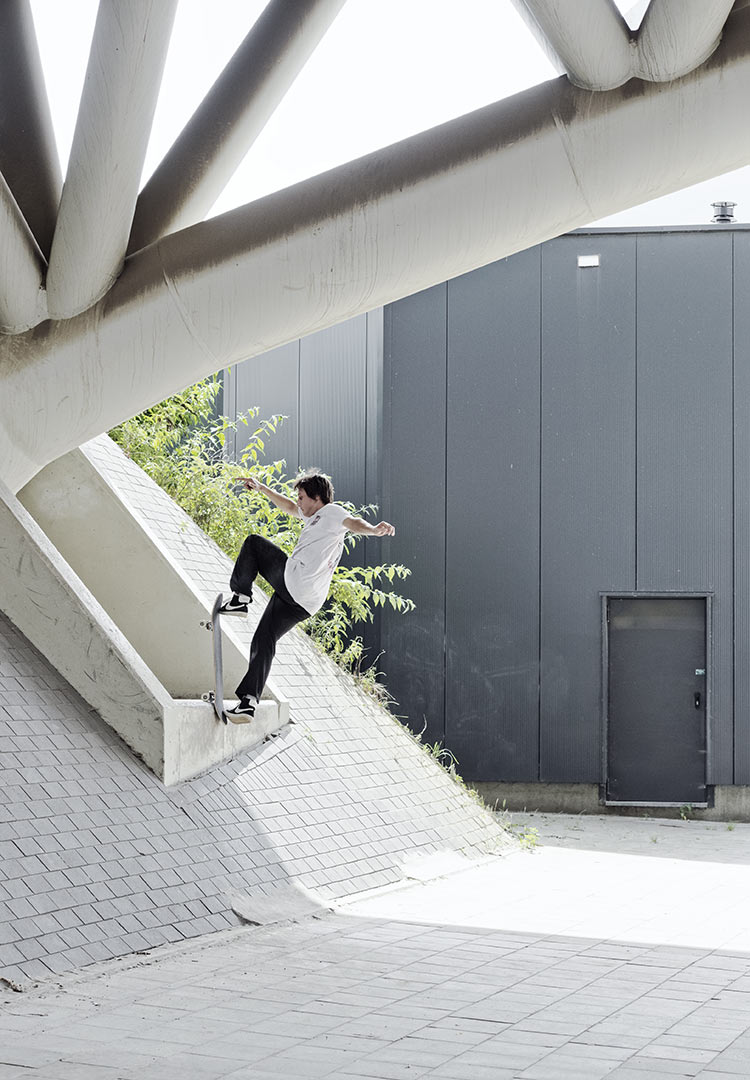 What's your five-year plan with skateboarding? Got any big goals?
If I think that far ahead I get scared. I usually only think five days ahead. My biggest goal right now is to just stay happy.

What are you working on next?
I just finished a double part with Phil Zwijsen. That was pretty fun and it was something different for sure. It's going to come out in late October, I think. And we're gonna make Jacky 2.0, New World Order. First trip will be Ibiza. We're not sure what kind of footage we will get but that doesn't matter because it's all good.