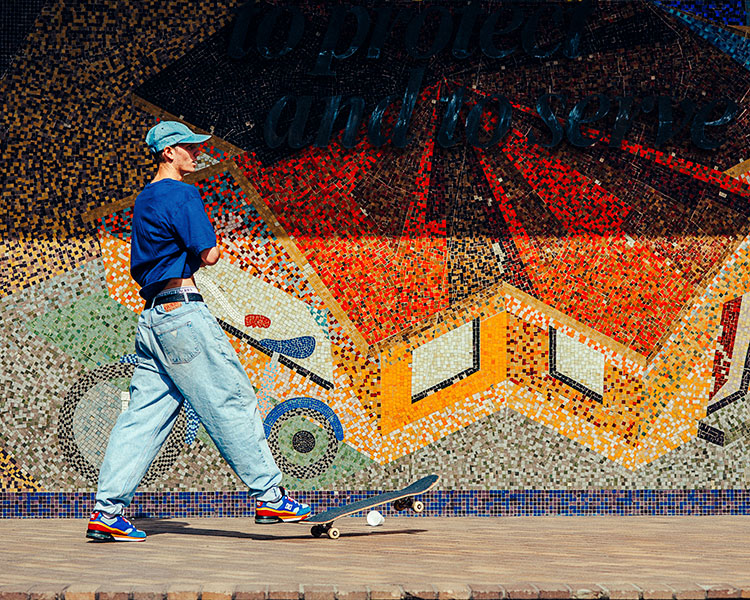 What up, mang?
What’s good?

Son of a bitch. Dude, I thought your Instagram clips were old.
Nah, I've been here for, like, two weeks. I was in SF for a week and now I'm here for a week.

You didn't invite me for a skate sesh, dude?
Nah, I don't know. Plus, I'm hurt. I rolled my ankle in SF so that kind of fucked me up a little bit. 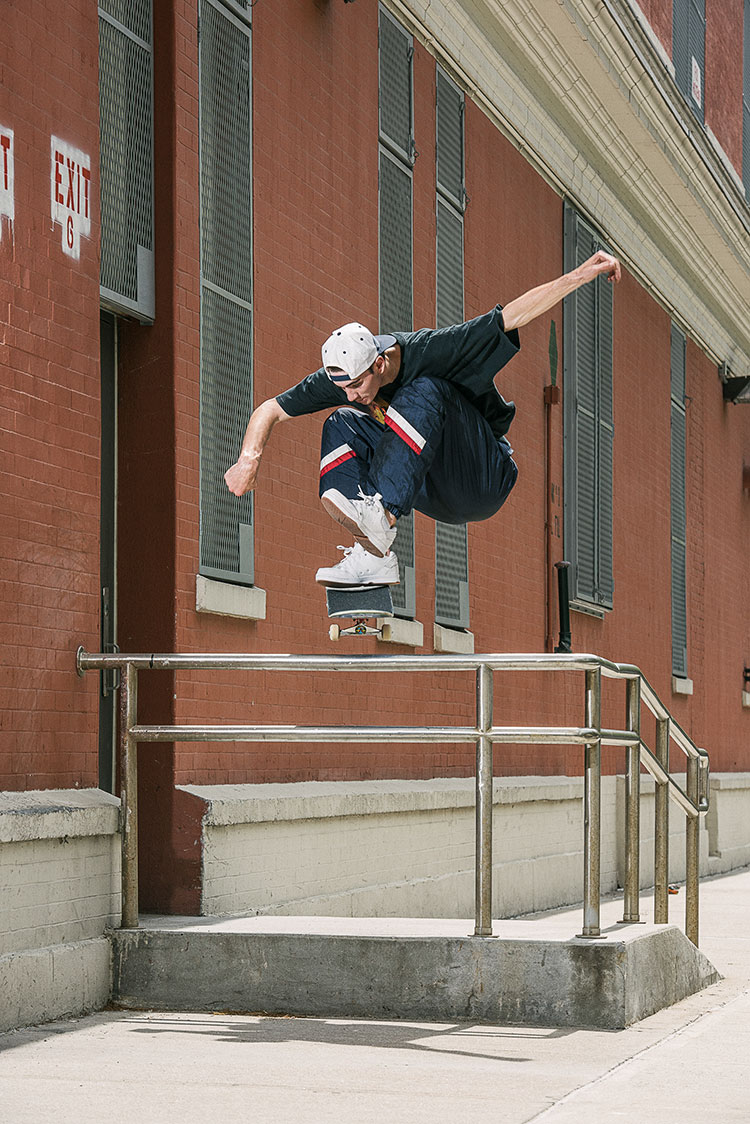 Sporty enough for the gym but right at home in the streets, Shanahan clears the bar with a nollie pop shove it     Photo: Sussingham

Well that sucks. Well shit, man, let me get right to it. I gotta ask you, what was the influence behind buying and skating in all those retro DC shoes?
Alright, so I was working at Woodward this one summer and I was skating the Lynx reissue, the slim ones, and I was pushing and I felt like the ball of my foot was mad sensitive and I was just, like, “Damn, my shit hurts really bad.” And it's, like, every day I'm just pushing on flatground and I'm feeling it. So then I was, like, "I'm just gonna buy some OG puffy shit and see how that feels." I went on my eBay that day and bought them. I got the Helix model. I don't know if you remember that one.

I do, yeah.
That was the first one I bought. I got them, skated them, and they felt so sick at first, but they blew out in, like, 20 minutes. They just crumbled. But I was just so hyped the 20 minutes I skated in them. I filmed this one trick and it felt so good. Then I just started buying more. Some of them work, some of them don’t, but it just feels way better on your feet. And then, of course, watching old footage and shit gets me hyped on it.

So is it more of a comfort level over aesthetic?
Honestly, it's about 50/50.

Oh, no shit?
I mean, all the old footage is gold, of course. I'm super inspired by that shit. But yeah, definitely it's functional too.

That's pretty cool. Yeah, we were tripping out on that and I remember Jeff Pang actually brought it to people's attention. That was pretty cool.
Yeah. 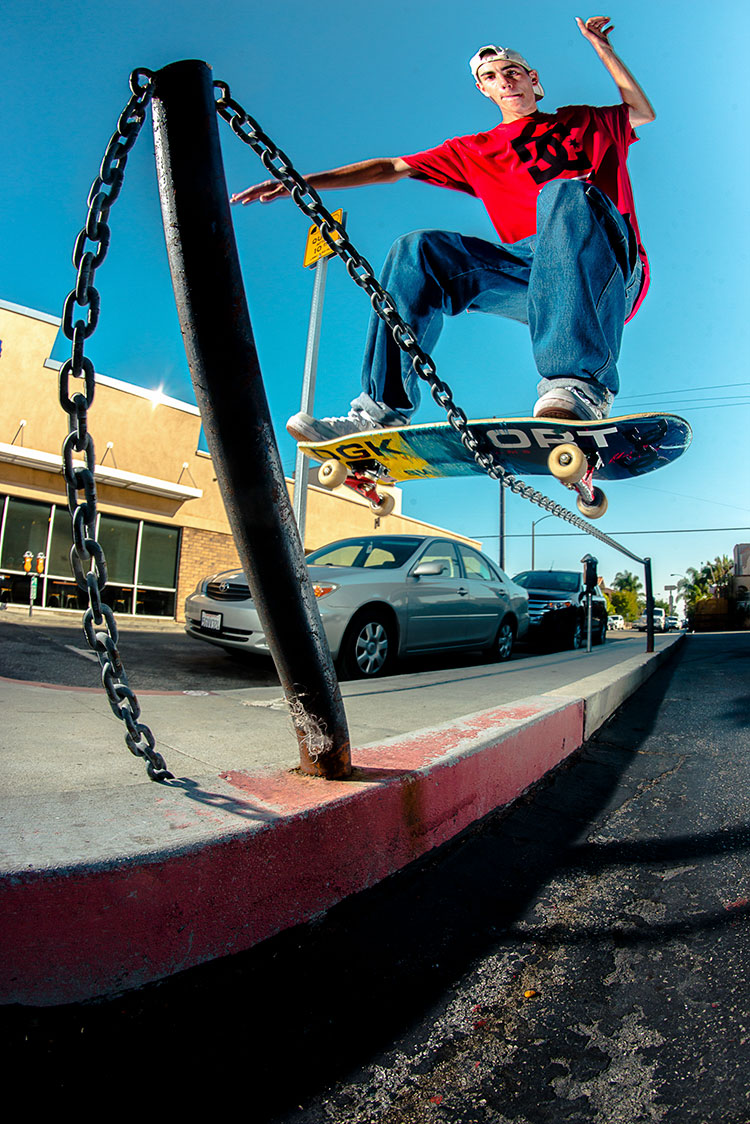 Boardslide on the chain, high risk of pain     Photo: Papke

Is it strictly like a DC aesthetic that you liked about the throwback kicks? Even some of the gear and stuff I see you wear— Yeah, all the old DC shit was just the most poppin' shit. All the early 2000s or whatever, all the late '90s and shit. Yeah, that's my favorite thing. Plus, I was getting DCs before that, but I was just skating the thin shit that they made. So I was already, like, “Oh, I'm just gonna get old DC stuff 'cause it's poppin' anyway and I get shoes from them.” But yeah, all the old DC shit's the best.

That's cool, man, because a lot of people are saying now there's this big comeback, especially like the Love days and the shoes that were worn then. But I keep telling people, “Look, dude, this is Shanahan and a lot of East Coast guys' thing.” You know what I mean?
Yeah.

It has something to do with them where you're tying in the old DC aesthetics into your new, current gear set up and all that shit. I don't know. It's pretty dope. I like it a lot. It's a cool move, it's nice to see, you know?
Thank you.

So the US tour last summer, was that your first getting-in-the-van type of situation?
Yep, it was.

And was it cool or was it awkward or how'd that hit you?
Nah, it was sick. That was really sick. I mean, I'm not super loud or anything. I'd listen to what you guys had to say, your stories. I don't know; it was sick. It was fun skating with everybody. Everyone's cool as fuck. I was hyped. 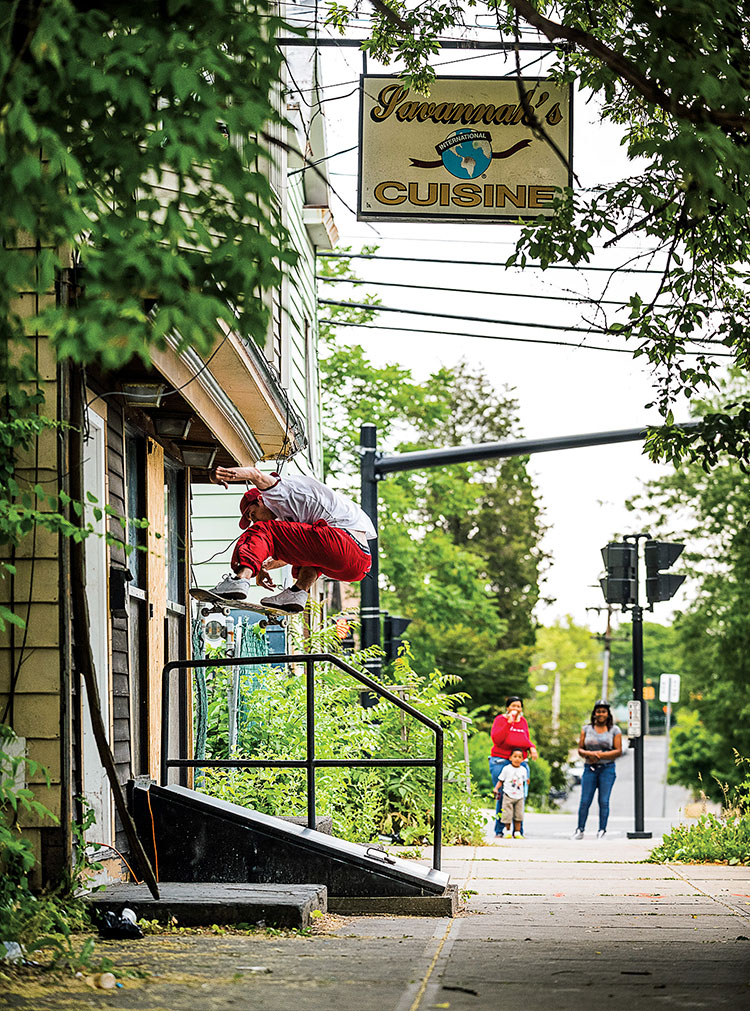 So fly he color coordinated his outfit with that woman in the background. Backside 180     Photo: Blabac

And where exactly do you live?
I live in Pennsylvania, in the Poconos, between New York City and Philly. It's a little bit closer to New York; I’m about to move to New York City. There's a van in my town that's 15 bucks, it takes an hour and it drops you off in Harlem, then I can take the train wherever from there. And it's about an hour and a half from Philly, so I kinda grew up skating both.

Philly and New York, to me, have always been really close, but yet they have such a different type of vibe between the two, you know? Both cool in their own sense. Do you have a preference or do you switch your mental state when you go from either Philly or New York? How do you do that?
I definitely go through waves of that shit. When I was a kid I would be, like, “Oh, Philly,” 'cause when I was younger I'd go to Philly more 'cause it was the same state. I think just driving out there and shit, I felt better about it and it was cheaper too. I was probably like 11 and shit and my mom just let me go. We'd just go downtown and skate Love, City Hall, Temple and shit like that. I was pretty hyped on Philly, and then I went to New York a while after. I was skating Philly years before New York, but then I started going to New York and I was, like, “Oh, shit.” It's so different, just the spots and everything.

It's big.
Yeah, I started to get more comfortable there. I kinda got more into the New York skate scene and when I would go to Philly I didn't really get into hanging out with people but I met people in New York. It kinda just worked. Then I started skating New York way more. But yeah, I like them both.

What's some of the videos that you grew up watching that had a lot of influence on you?
When I was really young it was Baker 3. that was crazy influential on me. I used to jump down stairs and do that whole thing a lot more. Then some newer shit like Mindfield was pretty big for me, but my favorite video of all time is Photosynthesis. That’s the best shit; that whole video is just like a masterpiece.

Alright let me get a quick rundown on vintage sponsor, what’s up with that?
So my friend Matt, he’s been doing this way before me. He always used to collect clothes for himself at thrift stores and shit, just finding, like, old polos and shit. Then he’d see cooler stuff that wasn’t his size but he’d appreciate the piece of clothing, so he would just buy it anyway and started selling stuff on eBay and. And then I got into it too and started buying clothes. He thought of the name and everything and started posting more skateboarding on there too and then we’d post, like, “Here’s this shirt. You can DM us to buy it.” Then it kind of just took off. It kind of went off the skating, people were seeing the skateboarding and they would get hyped, then they started following it and they would see the clothes too and people started buying shit, so it just grew from there. 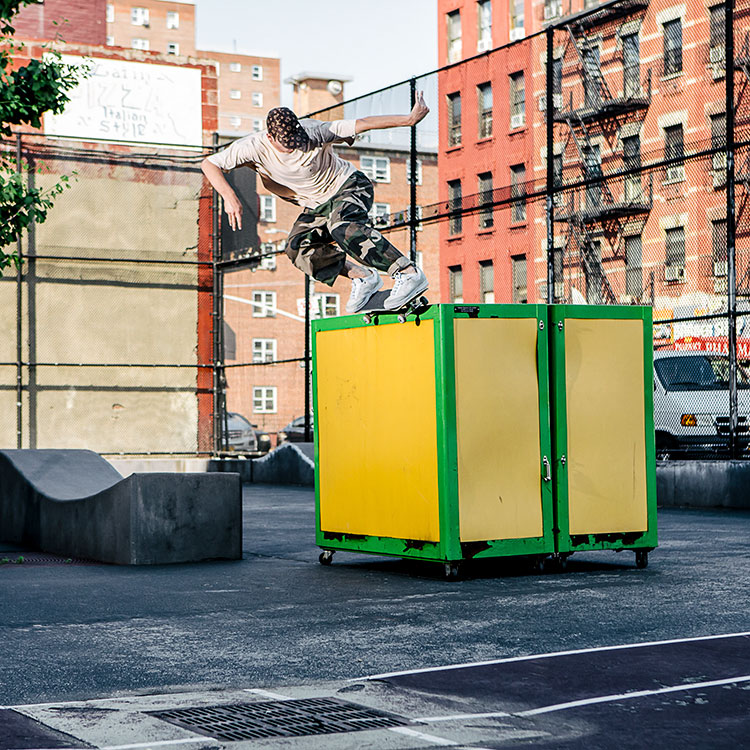 And you guys do some custom stuff, like your own versions of cut and sews and stuff?
Oh yeah, that one’s mine. It’s called One Off John. I’ll find cool clothes at the thrift store, but it’d be stained or something. This is how I started doing it: I’d see an old Champion thing and it was stained up, but the graphic was perfect, so I would just buy it and cut out the logo ‘cause I liked the logo and I would just sew it on another piece of clothing. Yeah, I just started making custom stuff, like cargo pants.

How did you get linked up with DGK?
That was actually pretty random. Me and my friend Matt were on Instagram and he saw that someone posted a throwback Gold clip. It was like Marcus McBride Got Gold or something, one of those videos and we were just, like, "Damn, this shit was sick. Gold wheels are sick." And he was, like, “Yo, you should just send Gold a tape or send them footage or whatever.” So my friend Po, who owns Homebase skateshop, hit up Gold for me and I think it was Steven Mullen who he was talking to, and he was down but he wanted me to ride for DGK too. So I was, like, “Yeah, fuck it.” I was getting boards from my friend Dane but I was, like, “Yo, DGK wanted me to get boards so I’ll just do that.” He was cool with it.

Any last words, Mr. John Shanahan?
Shit. I don’t know, that’s a crazy question. Nah, I don’t even got any. I couldn’t even tell you. I’ll think of something next time.

Alright, well thanks for calling me while you were out here. 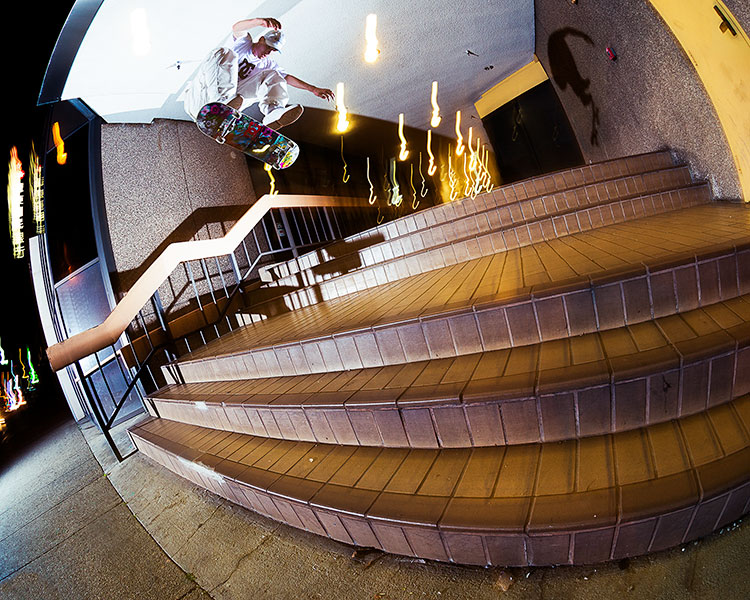