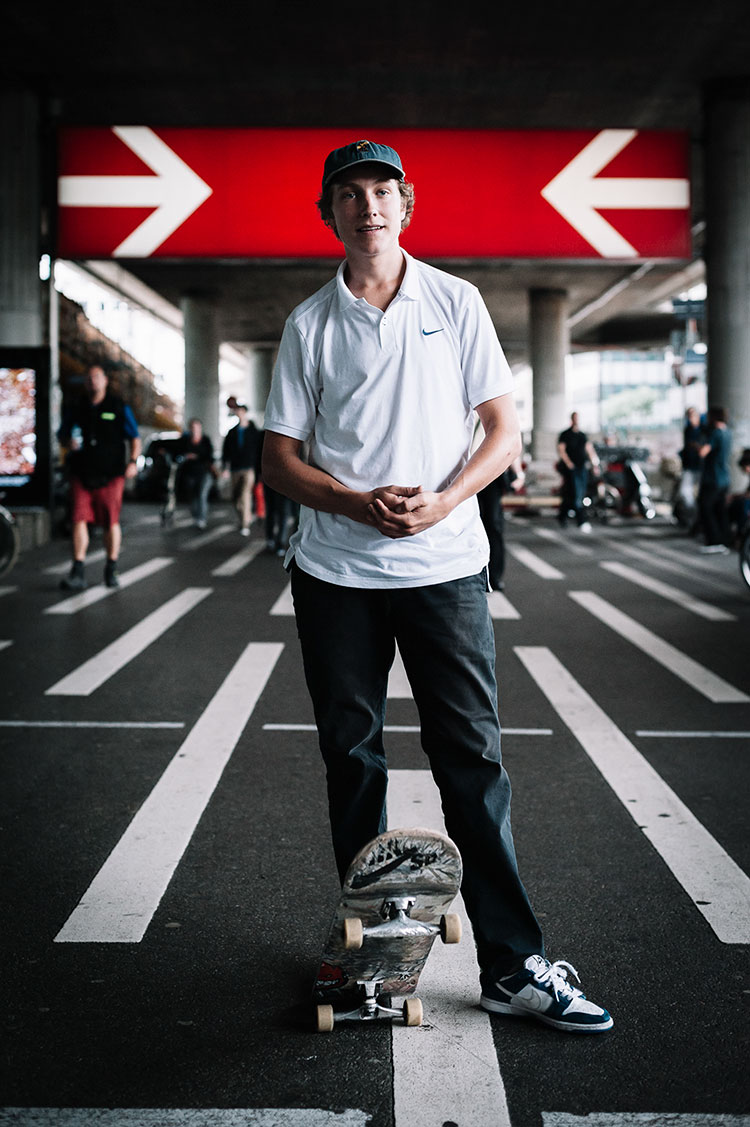 Kilian was first brought to my attention through lifelong pals Rob G and Rodrigo Petersen—they all shared mutual sponsors in the LRG clothing days. We finally met in person a few years back at a trade show in Long Beach, with the knowledge that he was going to be the next brethren to ride for Boulevard. Traveling with him last year on a tour through Japan really solidified how rad of a human he is, in my eyes. It’s insane to watch him skate everything in his path. From his unique trick selections on ledges to ripping any transitions put in front of him, he’s got it all across the board. I caught up with Kilian to talk about travel plans, how he learned to speak Portuguese and this most recent K to Z part. —Danny Montoya

What up, Kilian? Where are you at right now?
I’m in Sicily right now on a trip filming with the Gronze guys for their next episode.

Oh yeah? Where was the last trip, the episode that just came out?
We went to Gran Canaria, close to Africa. The episodes are all about going to cities on the Gronze Islands. Max Geronzi came up with the idea and next we are going to Iceland. So far it’s been really fun, some good trips.
  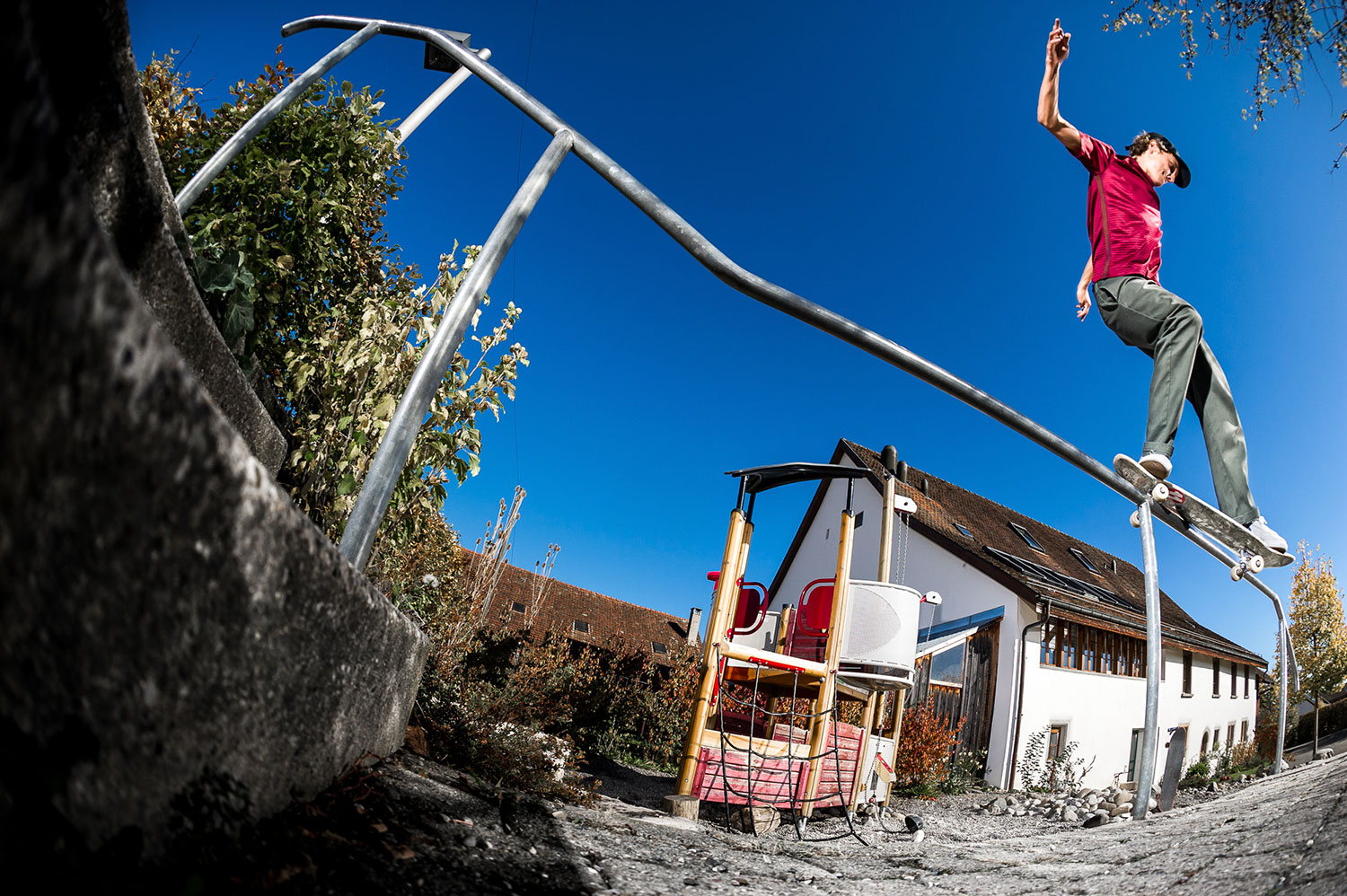 Zehnder takes a back Smith past the bender

Where are you originally from and where do you live now?
I’m originally from Zurich, Switzerland, and I still live there. It wasn’t until I was about 18 that I started traveling a bit more and visited the States. I’m thinking about moving to Barcelona to live there for a while since skateboarding and life in general has been really nice.

Are you going out there soon for another trip?
Yeah, I’m going out to meet some of the Boulevard guys like Rodrigo Petersen and Tiago, but it’s only going to be for about four days. Then we have another trip planned with some of my Swiss homies to Portugal after that for about ten days. Everyone is friends and skates together. It should be good times.

If you were able to go anywhere in the world—all expenses paid—where would you go?
I guess it would have to be a crazy place, maybe the Maldives islands or somewhere like that. I believe there are some really nice places there, kinda close to Thailand, and I have never been over that way and I’ve always wanted to see it.
 

’Til he gets to Malvides, Kilian’s kickflip noseslides to 180 nosegrinds will have to happen on his home turf

So about your K to Z part that just came out, where was it mostly filmed at? Was it in your hometown or on your travels?
Most of it was filmed in Switzerland, in Zurich and little towns surrounding the city filmed with my good homie Bobaj. He is the man. He’s always coming through and he’s down to film and skate and is always getting us hyped.

Do you prefer filming in your hometown or being out on the road?
I enjoy being at home skating as the spots are fucked-up good and my friends are there, but there is something special about being on the road. Like here in Sicily right now, the spots are so good and they are all new, so you’re skating something different every day.
  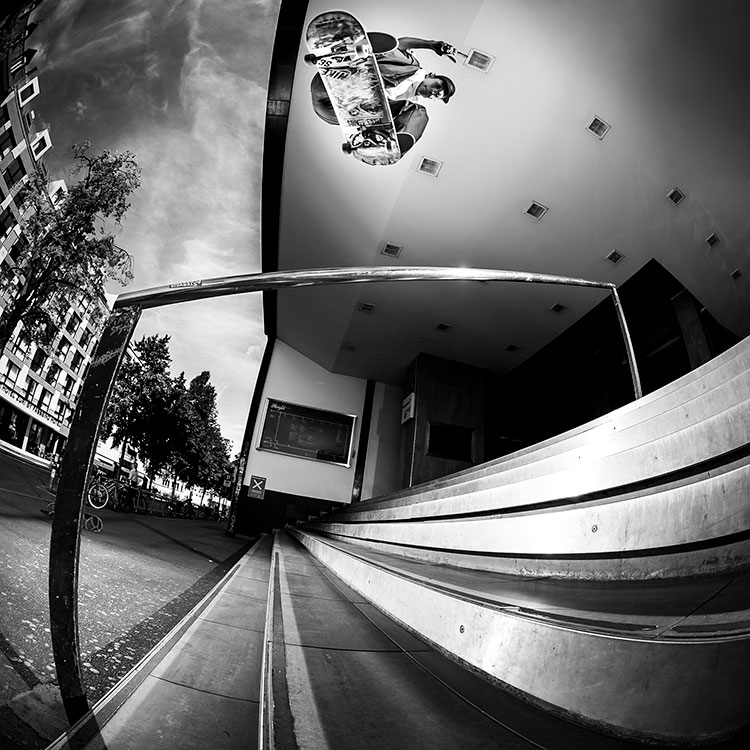 Tell me about the food in Sicily. Have you had any prosciutto?
Oh, man, it’s so good. I’ve had a little of the prosciutto but the pizzas and pastas, like raviolis, are delicious and so good it’s crazy. The tomatoes as well—they’re so sweet and juicy out here.

So on another note, how did you learn to speak Portuguese?
I learned Spanish in school and then I spent some time in Spain and became more comfortable speaking the language. Then I was living at the Brazilian house off Broadway with with JP, Tiago, Carlos Ribeiro and Carlos Iqui—that’s really where it became more familiar. When I would hear it, I would think it’s really similar to Spanish and sounds the same and I always wanted to learn it. And I’ve just always had good vibrations with the Brazilians. I also went to Brazil for a bit and I’d ask a lot of questions and the guys would help me out. I also used a dual-language app. That helped, too. 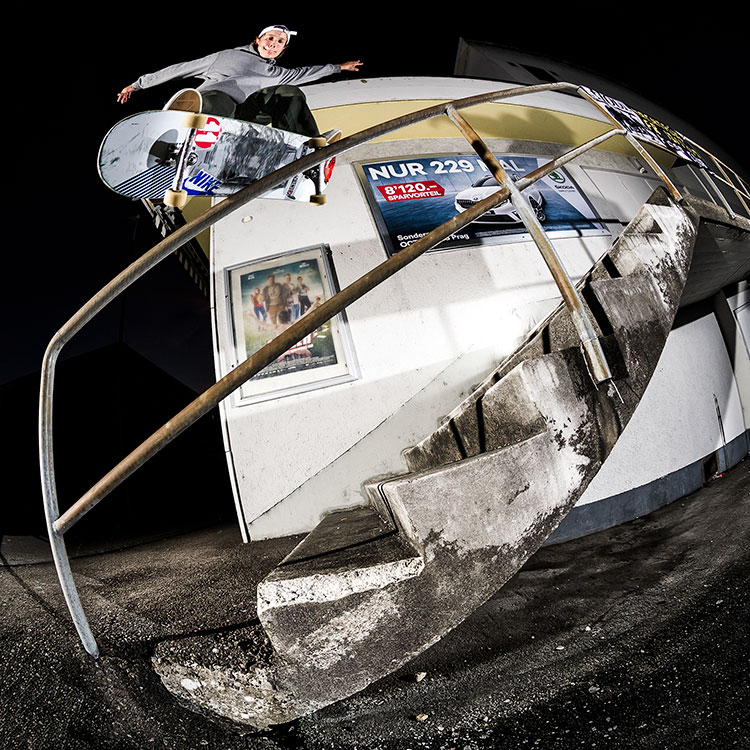 How do you say switch front feeble in Portuguese?

What’s your favorite city you’ve been to in Brazil?
I’d probably have to say Rio de Janeiro! Yeah, Rio had some really good times. The beach is so nice, there are all these new spots there, the food, the parties. Also, the people there know how to live and have a good time.

What’s going to be the next video you’re working on?
Working on a video with the Boulevard guys. We’ve been filming a lot of VX clips for a video that should be coming out at the end of this year. That last time I was in LA I was able to get some stuff and now we are going to Barcelona soon. Should be cool, just keep it going.
  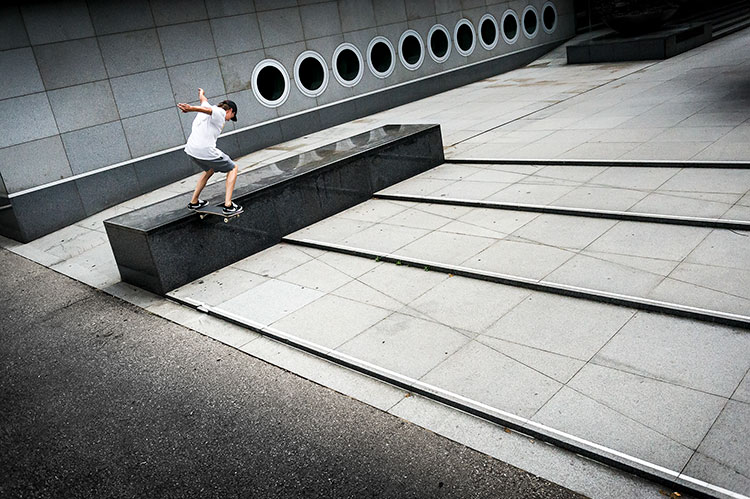 When you come out to California you spend time in the Ventura area. How did that come about? Who do you hang with up there?
One of the first American friends I met when I was 18 was Angel Saucedo. I met him in Barcelona. He gave me the opportunity to come to out to California and stay with him in Ventura in the winter of 2012. We became good friends so we try to keep in touch and kick it. The last time I was in LA, this past January, was so fun, skating with a lot of the Ventura homies. We should go up there when I come back—go skate with Angel and Mike Anderson.

That would be rad. That park that Mike has in his backyard looks awesom. Ever since I’ve known you, you’ve been able to skate everything. How did you learn how to skate transition?
Growing up we would skate mini ramps and whatnot. Also, bowl and pool skating was fascinating to me. So back in Zurich they started to build some bowls in the parks, and there’s a really good DIY pool, actually, and I just starting fucking around with that a little bit. I feel like you should just try and skate every spot, you know, even if it’s not that easy. Just try a few tricks to start and then next time try to get a few more and make some fun out of it.
 

Skate every spot, especially if they look like this—backside 270 nosepick

Is there anything we should be looking out for from the Nike SB Europe crew?
Actually, yeah, there is a Barcelona-type-of-themed video coming out with the Europe riders. I think it’s gonna be parts from Daniel Lebron, Javier Sarmiento, Fran Molina, Lupa Sin, Youness has some tricks in there, too, and some others. They are filming from now until the end of May.

Rad, so some new stuff coming on the horizon for you. Do you have any brothers or sisters? Who were your influences growing up skateboarding.
I have two sisters and one brother. They are all older than me. I got into skateboarding because of my brother. There were these big crews coming to my school to skate because there were some spots there and I was always drawn to it. I was also really into soccer when I was growing up. When I was 13 or 14, I just wanted to skate on Saturdays and not go to the matches. So it got to the point were I was, like, screw it. Fuck the matches. Let’s go skate on Saturdays—all day. Let’s cruise around all the apartments as long as we want to. 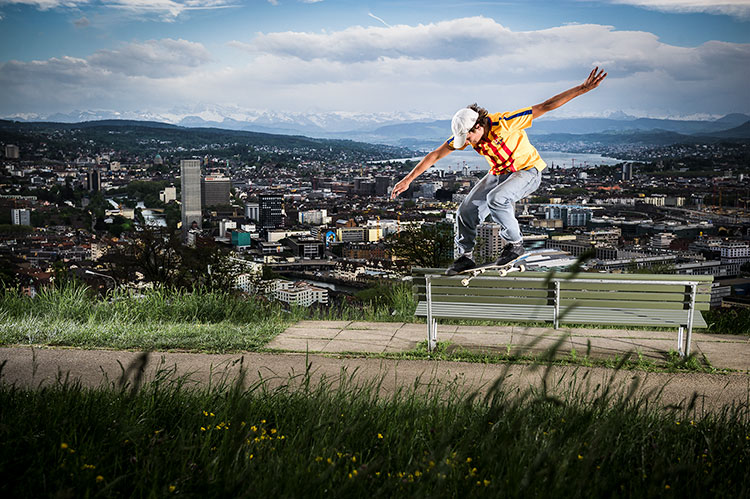 How did you get into hip-hop?
Probably by staying in the Long Beach area a bunch with all the G-funk stuff. Even in Zurich we like a lot of that era—old school stuff like that. I love music and I love finding out about new music. Right now I’m really into stuff coming out of the Memphis scene—Memphis rap, stuff like Tommy Wright III, Gangsta Pat, Three 6 Mafia, UGK.

Anything else you want to mention?
I want to give a big thanks to all that have been helping out: my family, my girl, all the homies, AITSCH gang, all the sponsors, Nike, Deluxe, Boulevard, CBD—ha!

Alright, Kilian, have fun and safe travels!
See you in June, hermano. 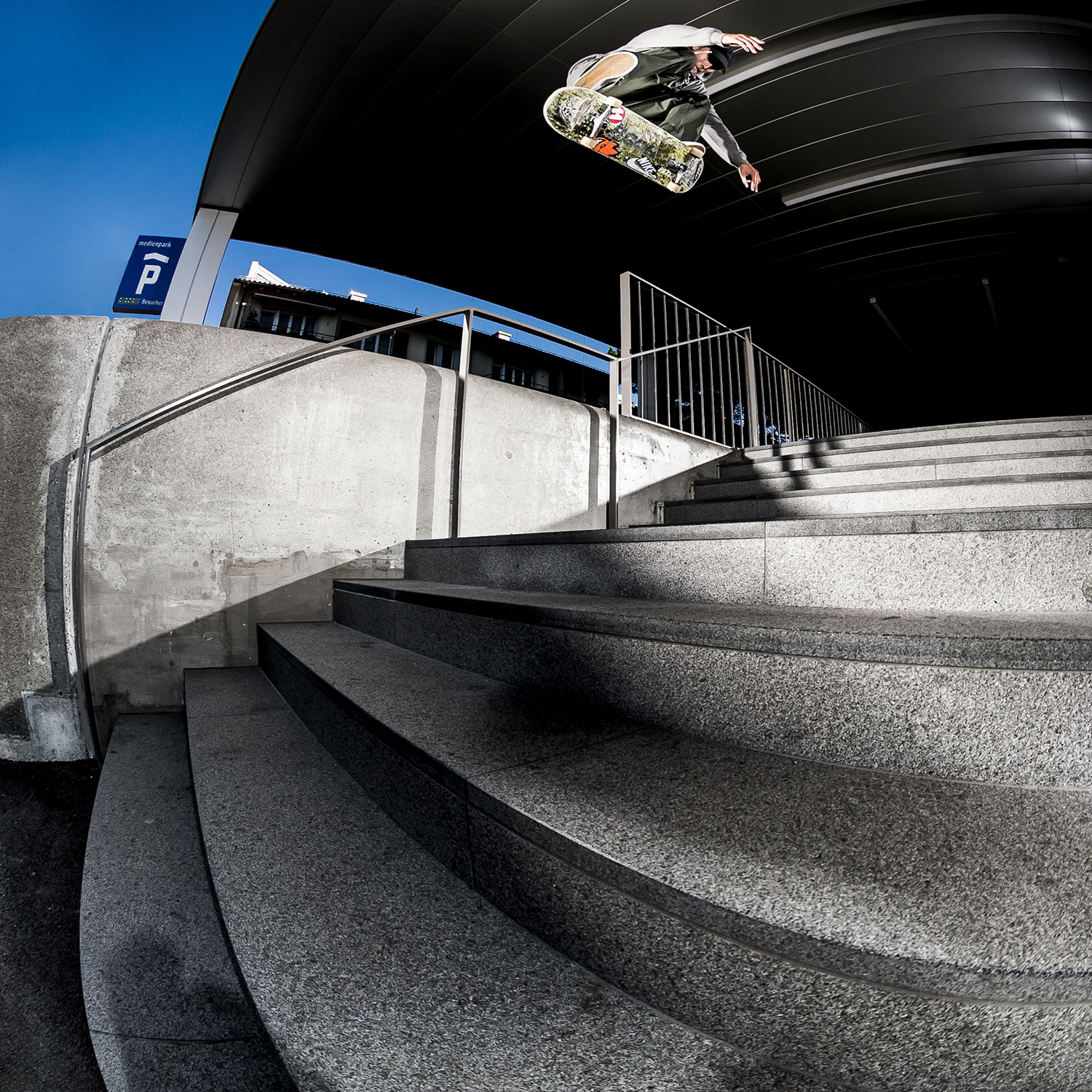