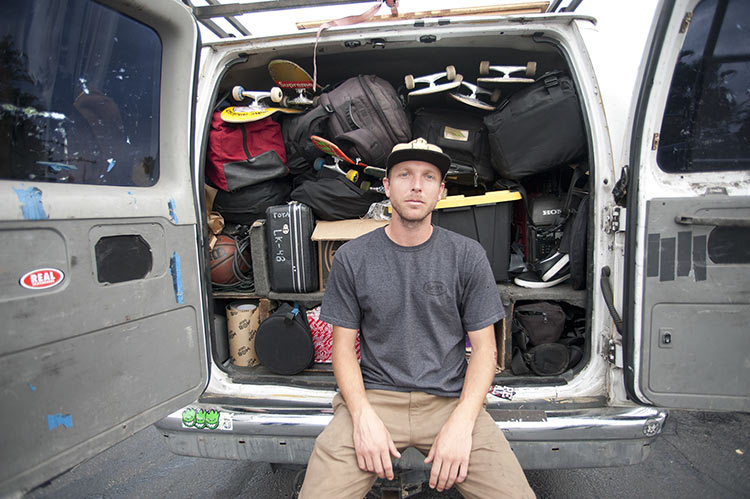 Let’s run it back off: how old are you, who are your sponsors, where are you from, how old are you, all that?
I'm from Phoenix, Arizona, I’m 26, my sponsors are Real, Spitfire, Thunder, C1rca, Cowtown, Bonham and the homies Pyramid Country.

Dope, did not know any of that. Who is the most-ten dude, if you had to pick one?
I think this is going to be a surprising answer. It’s gonna be up there between—

You or Jake Donnelly?
No, I’m in third place! Damn, that sucks. I kinda threw myself under the bus right there. I would say Jake and Pete. Pete might be the quietest dude but when he starts speaking, it’s only gay shit. 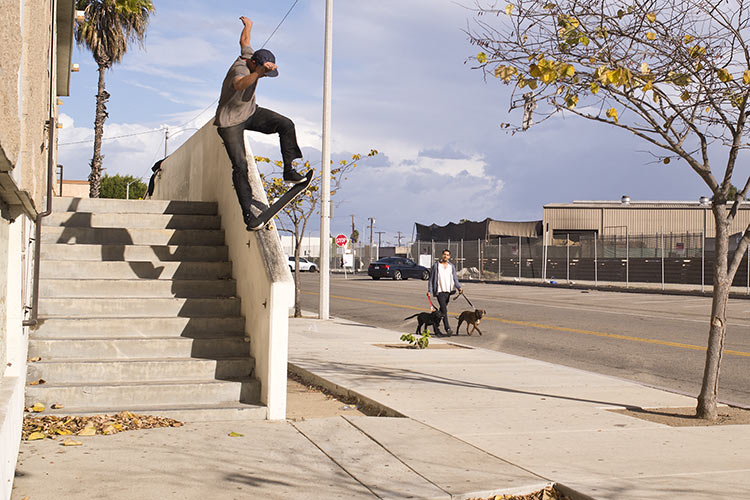 Alternate angle of Robbie's noseblunt from his That's My Shit article in the June 2016 issue    Photo: Hammeke

I think I saw him in SD and his arms were hurting. He told me, “Man, I've been doing 100 a day!” I was, like, “What?" Now let’s get this clear.  Are you part of the Wet Boy’s squad? I don’t even know much about them.
Okay, so if you don’t know who the Wet Boy’s are, Google their interview.

Yelp them!
Yelp them. Whatever. I don’t know when Arizona got the bad rep of being the—this is gonna sound homophobic, but Arizona skateboarders got the rep of being a bunch of gay dudes, bisexual skateboarders, whatever. But I’m not a part of that. So, whatever. The Wet Boys originated in Arizona, so it’s an ongoing joke with Ernie Torres every time he sees me or wants to make fun of me he calls me a Wet Boy. But the funny thing is that those dudes are way older than me. They are Ernie’s age. Ernie lived in Arizona when those guys were there and then guess what? The Wet Boys leave Arizona and go to Denver. Where does Ernie move next? Denver! He’s an original Wet Boy. He tries to throw me under the bus.

I might have to ask Ernie a few questions.
It’s on the record. Ernie is an actual Wet Boy. 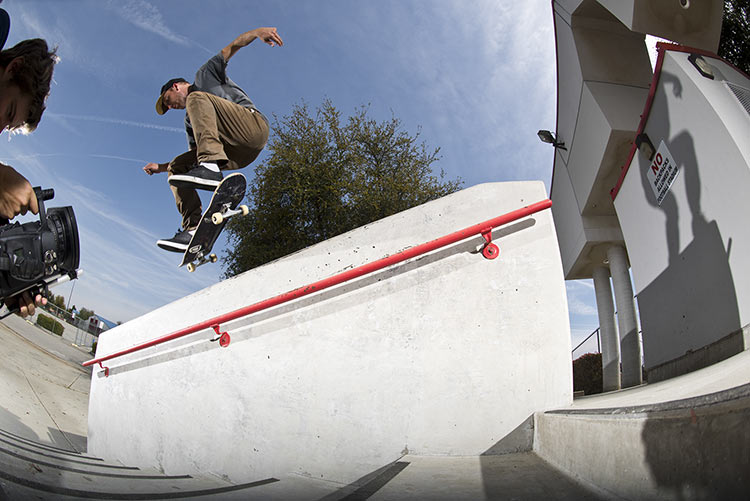 Before we hit this spot, Ernie insisted we go eat so that if we got arrested we'd have full stomachs in jail. Heelflip crooks     Photo: Hammeke

Alright, now that we got that clear, Laura at Cowtown wants to know: now that you're pro has anyone gotten your name tattooed on them?
No, but my friend David has my name tattooed on his ass because he lost a bet with me. You know that Vans ad with Geoff Rowley, the 180 over the shipping containers? He was, like, “It’s a frontside flip,” and I was, like, "No, it’s a frontside 180." Not to throw Rowley under but it’s a 180. He could probably frontside flip it, though.

But it was a 180? Oh shit.
Yeah, it was a 180—a controversial photo. I don’t know why we even made that bet. I don’t even have any tattoos but we made the bet. I was so confident. Whoever lost the bet had to get the other’s name tattooed on them. Extremley Sorry came out and it was a 180 and now he has my name on his ass!

Now that you’re cashing big pro checks, are you still eating a lot of fast food or are you expanding your food options to a higher culinary level?
I went higher grade this year. Actually, not. I just started buying groceries this year, eating healthier. 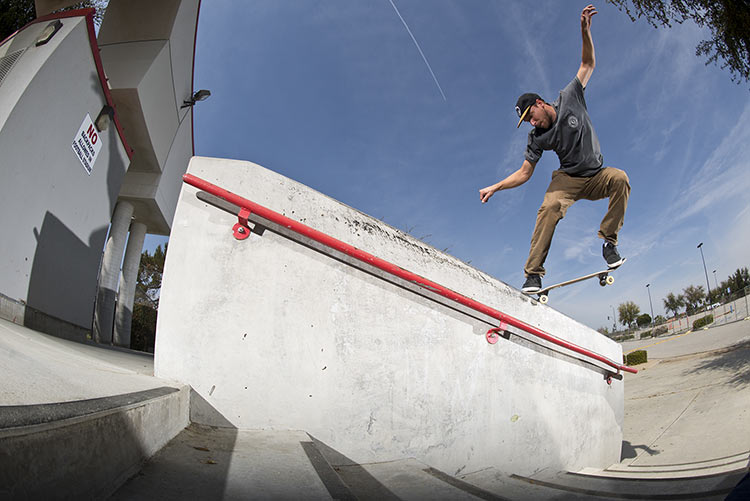 Backside 180 nosegrind on a spur-of-the-moment trip to Bakersfield     Photo: Hammeke

Pro God is the healthiest dude, right?
That’s it! Me and Pro God go in on dinner so I’m half vegan now. That’s the LA in me. I’m half vegan.

When did you start filming your Surveillance part?
This time last year, after that Through and Through video came out.

So less than a year, pretty much.
Yeah. 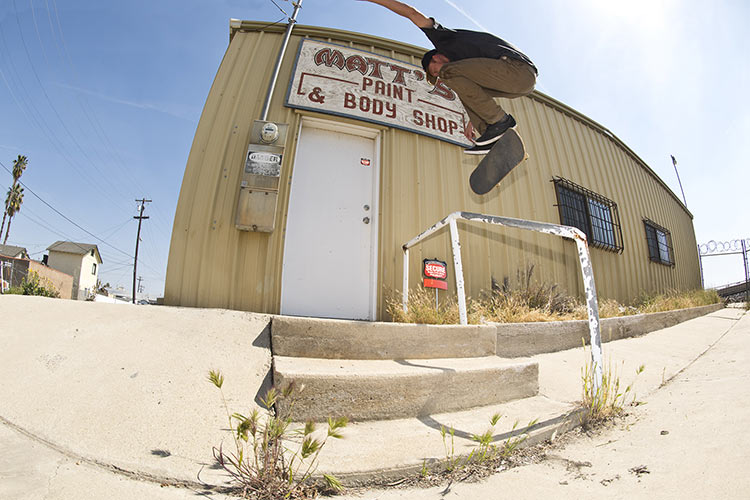 How much of that was filmed before you went pro?
None of it was filmed before I went pro. All after Through and Through came out. Jim told me last January he was gonna turn me pro and that I had 'til April to film a part. So I was stressing.

Thiebaud order.
Yeah, but he was probably just lighting a spark under me. But then he told me I had more time.

Did you tell him you’ve been pro? Like, "Dude, I’ve been pro!"
Yeah, I don’t need any more video parts. Ha! 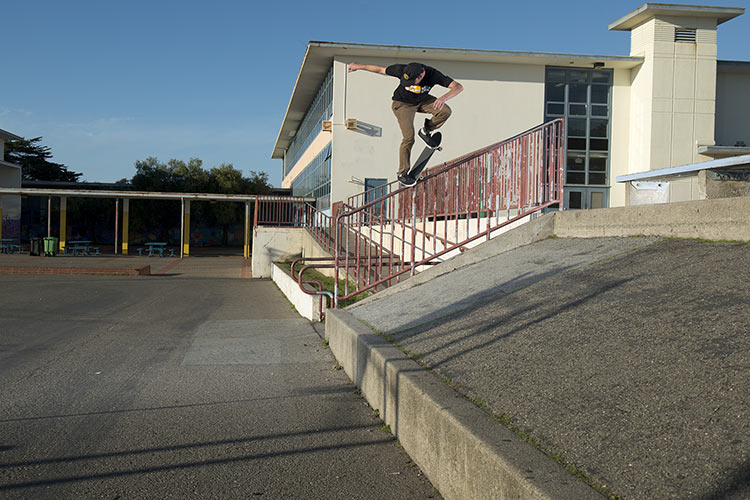 K-Walks might not remember it, but this backside overcook was definitely in the mag     Photo: Morford

Everybody knows you’ve been pro for years! What is pre-party anxiety and what sets it off?
Oh, that one! Oh, man, when there is something really sick going on, like a sick event that’s supposed to happen and you are so excited to party you get anxiety.

Have you ever been so excited you pissed yourself?
No, never pissed myself. Then there’s PPD: the post-party depression when you are so bummed you will never have that much fun ever again. 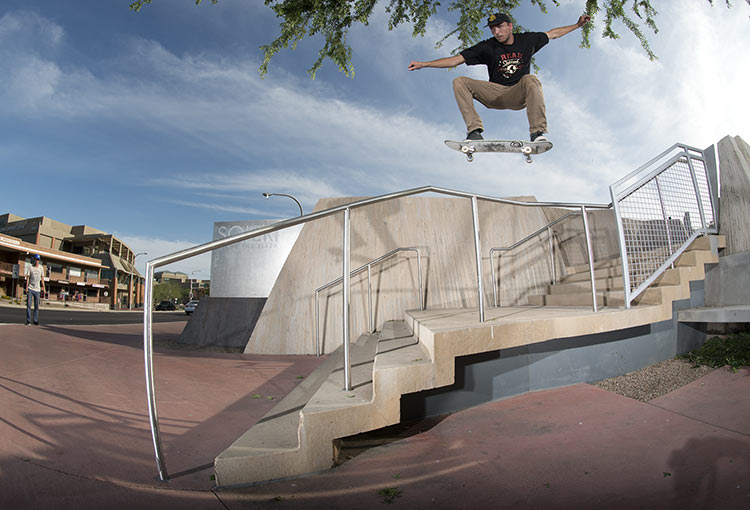 Do you get FOMO?
Yeah.

When was the last time you had pre-party anxiety?
Probably New Years.  Our friend JJ who is the artist for Pyramid Country throws a party at The Compound—his house in Tempe. It has a giant backyard; it’s massive. It’s an art show with bands playing. A get-together with all the homies. It’s a good time.

Are you still bummed you haven’t had an event that lived up to that one so far this year?
Yeah, after that I peaked. The year just began and I’ve already peaked. 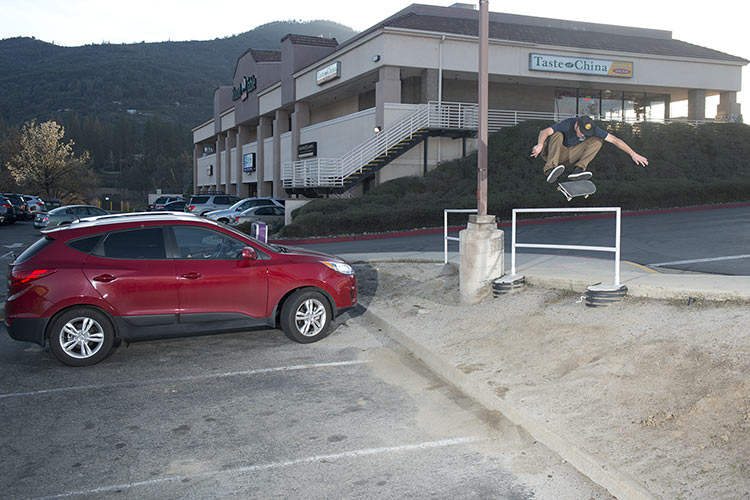 The ender from his Surveillance part, kickflip straight to Taco Bell for another burrito     Photo: Morford

Speaking of FOMO, who has the worst FOMO?  Pro God?
I don’t know.

Remember when we first met? My mom dropped me off at Cowtown and I was, like, 13 or 14. Hopped in the White Widow back in the day.
I don’t even know how old I was but you were so young. I had just gotten a white Nissan Altima and my license. Your mom wanted to meet me before we started going to spots to make sure I was a trustworthy driver since I just got my license. 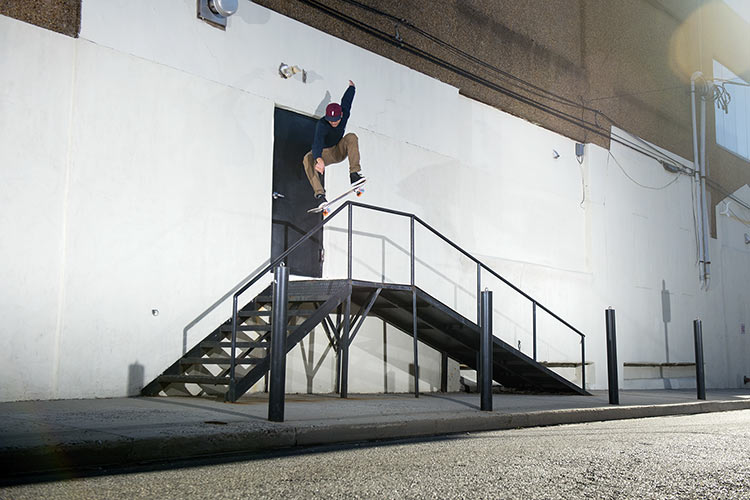 Gap to lip in Philadelphia with a belly full of cheesesteak from Tony Luke’s     Photo: Morford

You got the A-OK.
Then we hit the streets, went to the contest.

And we turned it up! What’s the story with how your car got named the White Widow?
Everyone on Real was in Arizona. Me Pete, Biggs and Jake were in the Altima and the van was following us. It was night and we were headed back to the hotel. It was all quiet and Biggs just goes, “We are the white widow.” We were all, like, "Huh?"  Pete asked him what he was talking about. Biggs all fired up says, “Ah, shit. You got the white Nissan Altima; we all got clips; we’re the white widow!”  Biggs even had a little gang sign with like a W2 but he couldn’t ever get his fingers right.

Now that you are pro, are you still part of the DFW squad: down for whatever? Or are you calling the shots, putting the new guys in place?
I might call a few shots but I’m still down for whatever. 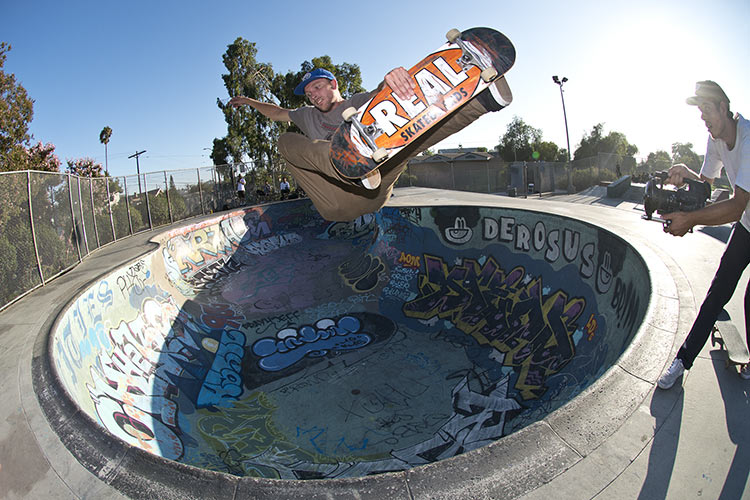 So Zion is not taking your seat in the van?
Nah.

On a female.
Dude, probably just that blue. It gets me. The Smurf top!

Robbie’s Smurfin’
No discrimination with hair color. I’ve done the pink, the blue, the green, whatever. 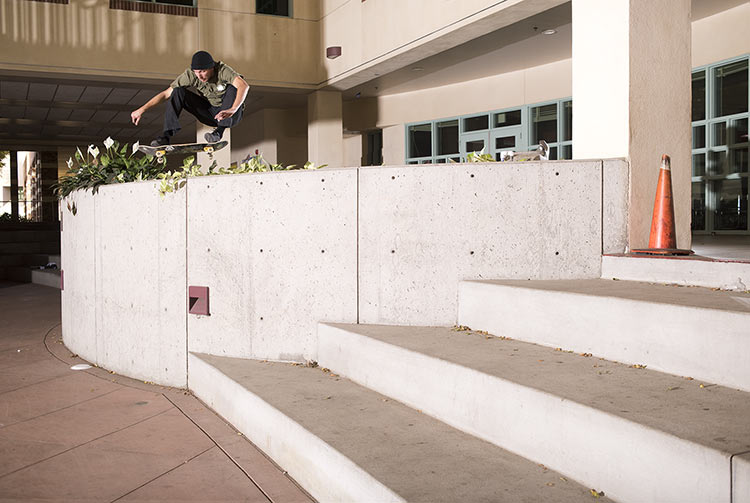 Frontside 180 over the wall in Beverly Hills     Photo: Hammeke

How many burritos do you eat in a day?
I ate two today. I ate two yesterday. I was going to go the whole month of January on self control but I gave in yesterday and ate two. So bad.

It happens to the best of us. What are your big plans for 2017? What are you Brockel flippin' next?
No big plans. Just working on the next project.

How did you manage to film an entire video part for Thrasher and have only two photos in the mag?
The photos were in Thrasher. That’s my Shit. The others were all ads!  Two-thousand-seventeen Thrasher interview!