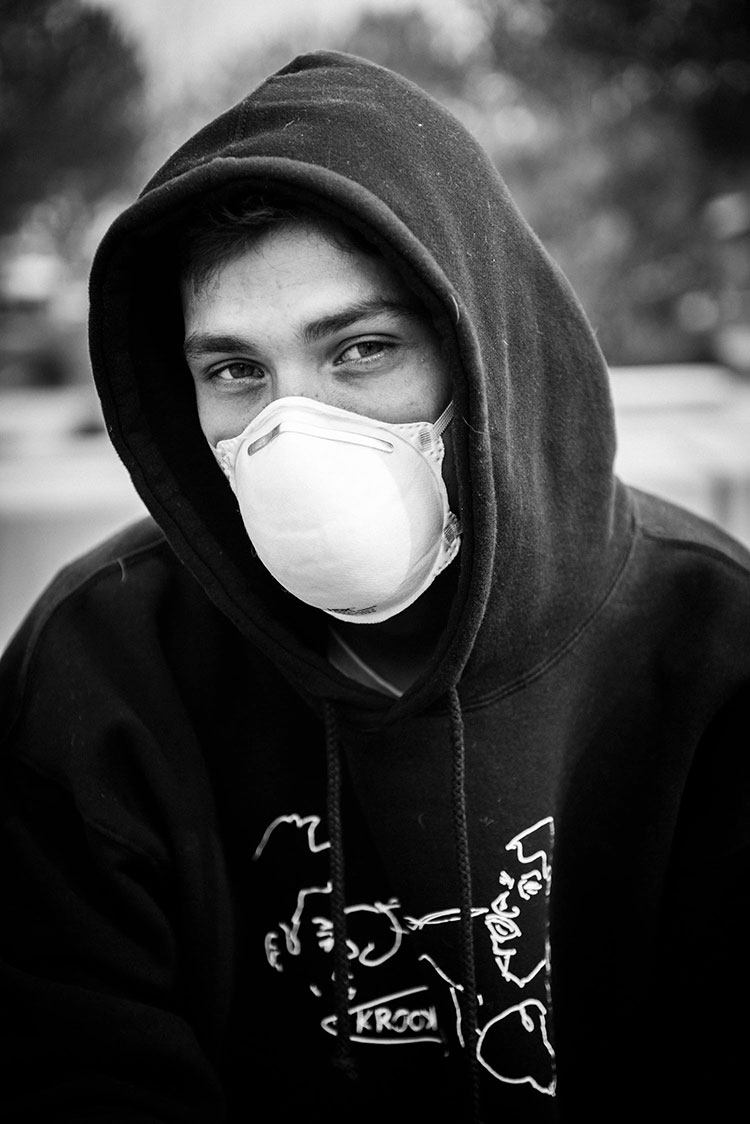 A lot of people might not know who you are yet. Let’s start with where you’re from.
I’m from a town called Yakima, in Washington. But I just grew up there. I was born in Connecticut and I moved to The Bay when I was 16. 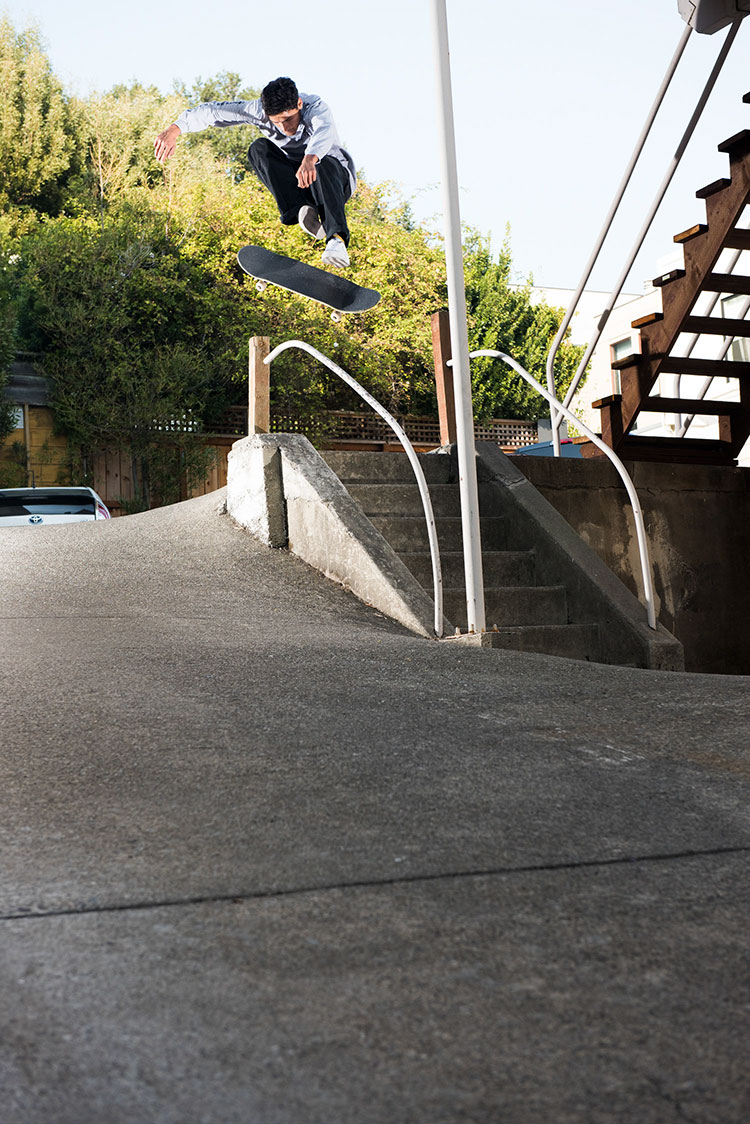 Surprised the wealthy tenants haven’t taken the spot yet—Simon 360 flips the rail before the homeowners’ association can assess the damage     Photo: De Martelaere

You and your brother had a shop in Yakima, right?
Yeah, it was called The Indoor, since there was also an indoor skatepark. My brother and my dad thought that kids needed a place to skate in the winter and then there was a little shop area in the front of the warehouse. So we just ended up making accounts and turned it into a skateshop. It closed, though. The town was too small to maintain it and there was another skateshop there as well.

What brought you to the East Bay?
Skateboarding, wanting to get out of the small town and family. 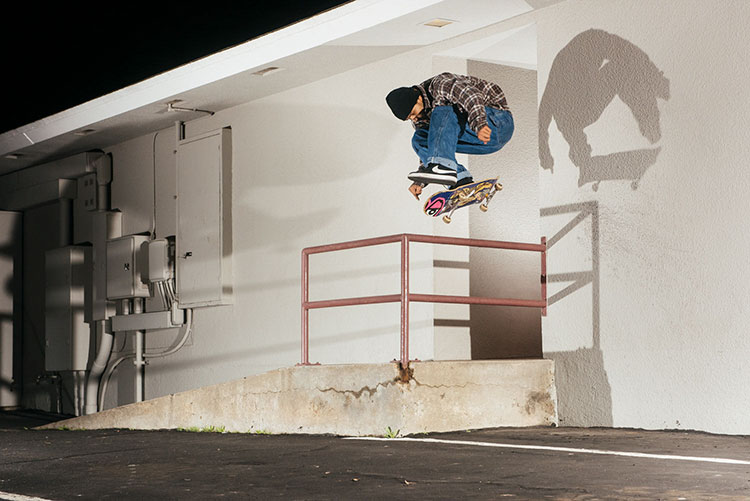 Someone told me that you are Marshall Islands royalty. True?
My mom's from the Marshall Islands, which is really small, and I think her aunt might be the president of there or something like that. She has a really high position on the islands. She was here for some crazy dinner because the embassy is in San Francisco.

Where are the Marshall Islands?
They’re below Hawaii; I think southwest.

You ever been?
I have not. I really want to, though. 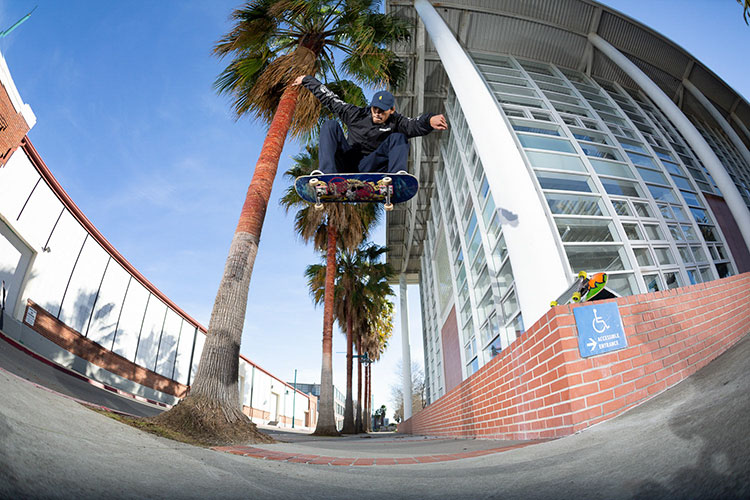 Simon falls short of launching this switch wallie all the way to the Marshall Islands but at least he cleared the sidewalk     Photo: Carabarin

Did you start skating in Connecticut or Yakima?
In Yakima.

Who got your first board for you?
My first board, I think was already in the garage. It didn't have griptape and it had a hammer or some kind of tool as the graphic.

What's the first video that you remember seeing?
I think it was Dying To Live. The one where John Rattray has a part.

That’s not a bad part to remember.
Not at all. 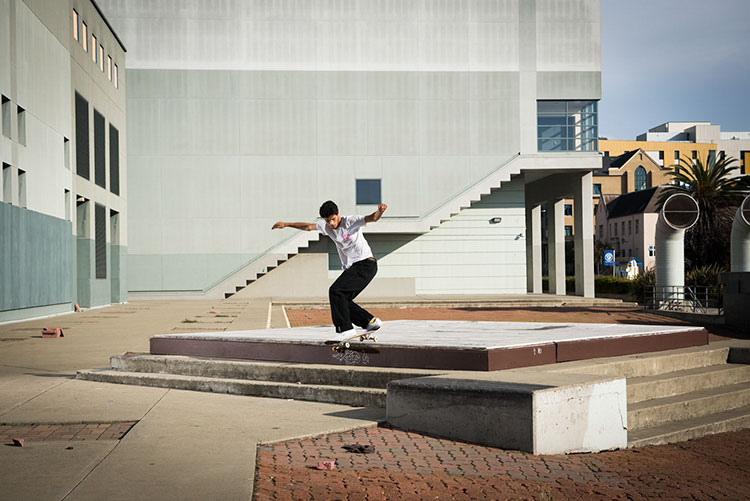 Coulda back lipped the shorty but Simon went for the long haul up top     Photo: De Martelaere

What's up with you losing a tooth while eating a croissant?
A couple years into having a fake tooth, I was just eating a croissant one morning and then something was missing. I felt around and my tooth fell out. It was the weekend, so I rocked the no tooth until Tuesday or Monday—whenever my dentist appointment was. 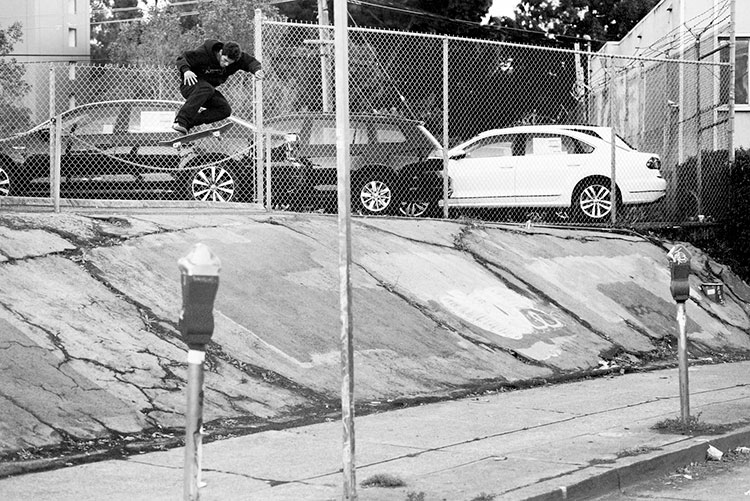 Trip on that chain and lose another tooth—no comply flip, buttery like a croissant     Photo: De Martelaere

Yeah, exactly. That's how you do it in the US.
Yep. But yeah, the cool thing about that was I found my tooth later, in the croissant.

No way!
I thought the tooth was gone. I thought I might have swallowed it or ate it and then later that day I was, like, Maybe I'll just look in the trash and see if I can find my tooth. And there it was, in the croissant that I spit out.

Oh, nasty.
Yeah, that's the same tooth that’s in my mouth right now. My dentist is pretty cool. He’s, like, "Do you have the tooth? I can just glue that one back in." He cleaned it and just put it right back in. 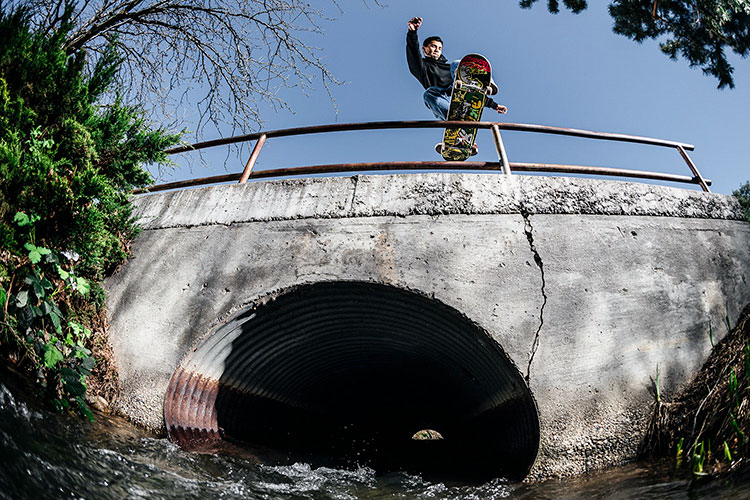 Rattray would no doubt be psyched on this sketchy front board     Photo: Roberts

You never get mad. What's up with that?
I don't really. Why cause a fuss, you know?

That’s the island DNA in you.
Yeah, it could be. Everything will be alright, you know? The thing that I will get mad at is video games.


You made some steel skateboard wheels a while ago? How did that come about?
My brother has a little lay that he let me borrow for a week and I needed a Secret Santa present. At first I wanted to make an animal but the metal already came in tube form. I shaped them in the shape of a Spitfire Formula Four Conical Full. You’re able to put bearings in them and everything. I put them in a fur-lined box to top it off. 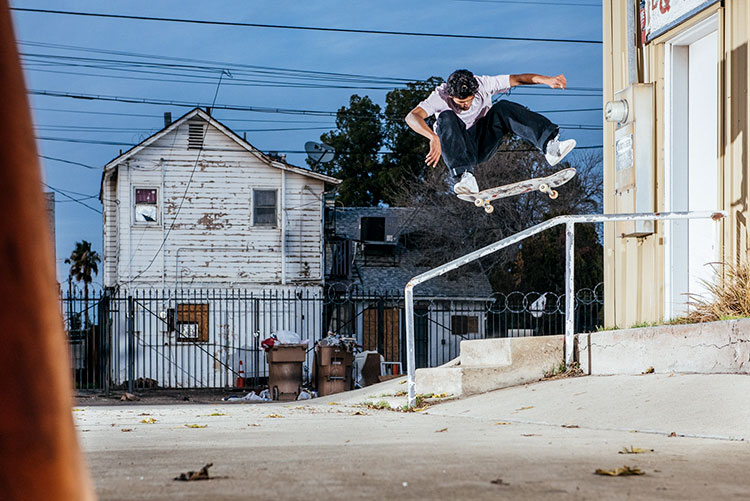 You’re really into cars. Didn't you own three at some point?
Yeah, I've had at least three. I'm back to just the first one, though.

What are your favorite cars?
I'm into the the 3 Series BMWs, the tiny ones. But right now, I have a 5 Series. It's big. It's nice for the homies, like how I picked you guys up the other night.

You can feel that there's some muscle behind it.
The one I have now is a V8, so it's a little spendy. 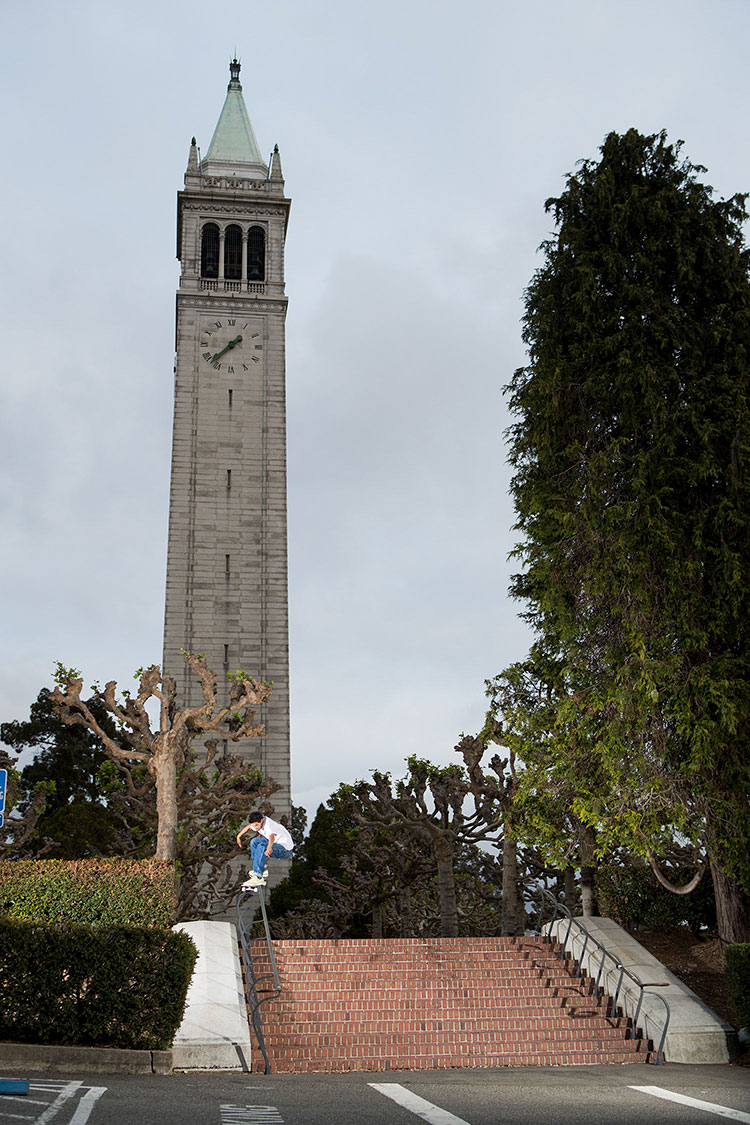 What time is it? Ollie over the rail time, dude     Photo: Morf

That’s why you’re trying to get rid of it?
Yeah.

So, if someone reads this, they can make you an offer?
Yeah, make me an offer.

You recently got a VX. Are you gonna become a filmer now?
It's hard to be a filmer—those backpacks are heavy. They suck, but yeah, I hope to come out with some VX videos shortly.

Stuff that you're filming or skating as well?
Both.

Who’s going to be in it?
Probably the 510 skateshop crew. All the regular homies. I don't want to name names because that would be me asking them, basically. I’ll just make it with whoever is around, really.

So we had the premiere for your part at 510 skateshop last night? How did it go?
Really good. So many people showed up. I’m kind of dying right now, though. At last call the bar didn’t want to give us beers anymore so our friend got us tequila shots, which I really didn’t need. On top of that, someone didn’t drink theirs so I had a second one. Rough.

Ha. You want to close this off with an old fashioned thank you?
I don’t want to miss anyone so I’ll keep it broad—my family, everyone at Deluxe, Thrasher, 510 skateshop and all my friends. 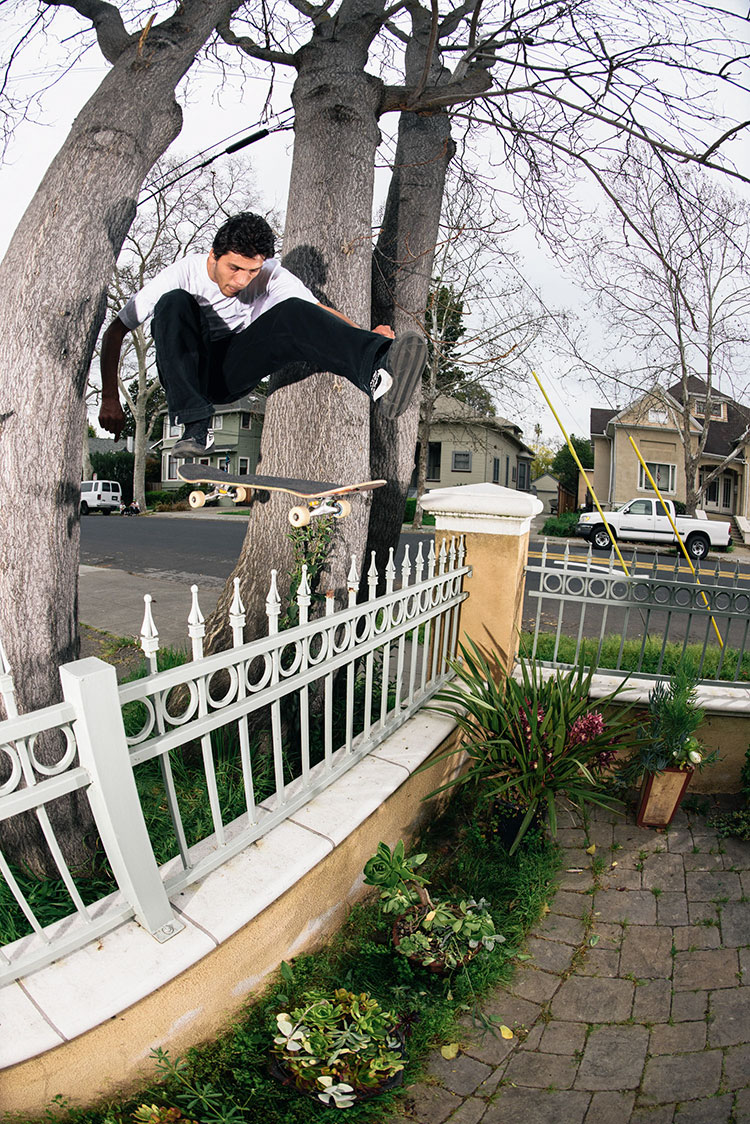