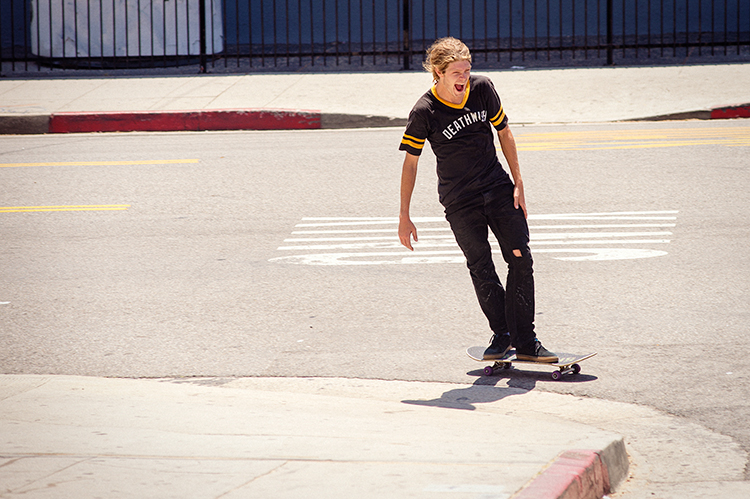 Taylor Kirby has been on a steady killing spree for years now.He was the first Shep Dawg to get the cover of Thrasher and the guy's got a reputation for hauling ass. After dropping a literally face-shattering new part, it was a no-brainer for Deathwish to turn him pro. With no signs of slowing down, we caught up with Taylor to get the Follow Up on his Shep Dawgs 5 part. —Ben Karpinksi

Hey, Kirby, what are you up to? We gotta get this Follow Up interview going.
I’m just over at Don’s Country Kitchen right now getting some breakfast. Sorry, I should have done this yesterday. I’ve sort of just been partying since I got the news.

All good. That’s some well-deserved partying. Did those guys catch you with the surprise on Sunday?
Oh yeah. I had no idea. I still can’t believe it.

You better believe the camera stayed on for this one. Backside 360 in the land of Lutherans    Sequence: Karpinski 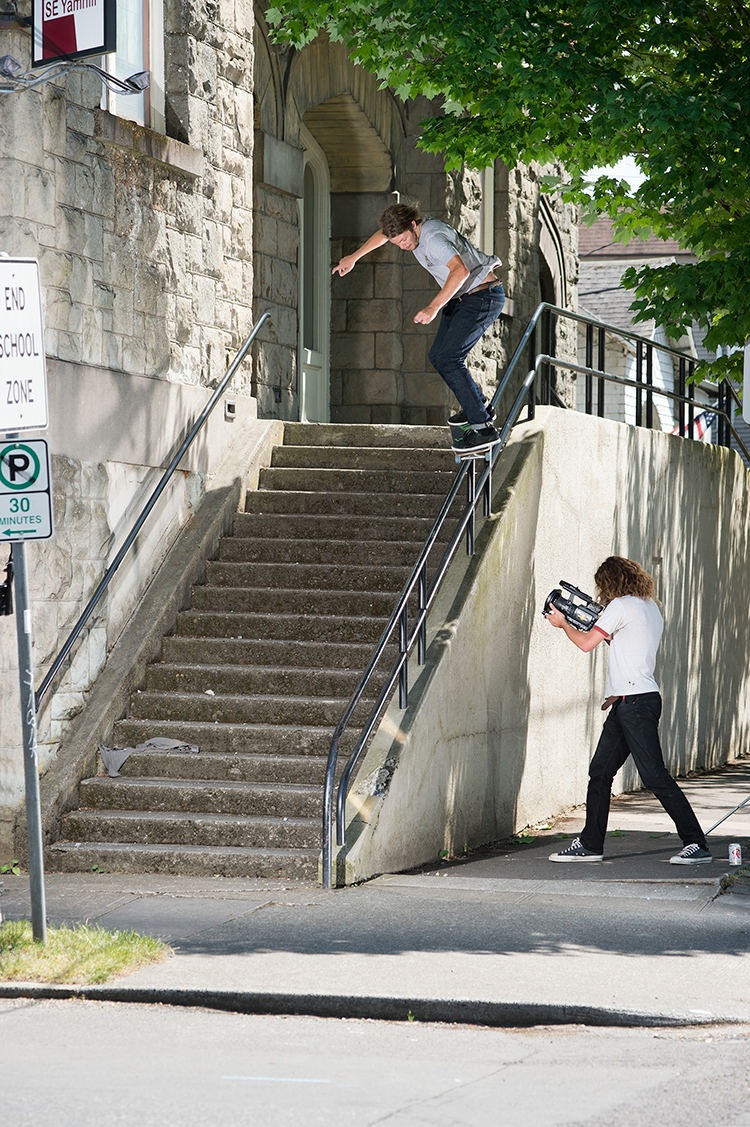 How many Kirbys made it out to the premiere? I had to strap on the fisheye just to get all of you in a photo.
Well, there were only a few actual Kirbys but a lot of family from my mom’s side came as well. I’d say there were a good ten to 15 family members there. Everyone I love was there so it was perfect.

Who brought the bottle of tequila?
That would be my dad. He loves tequila and was waiting for that moment for a long, long time. The second they gave me the board my parents were already there with the shot glasses out. 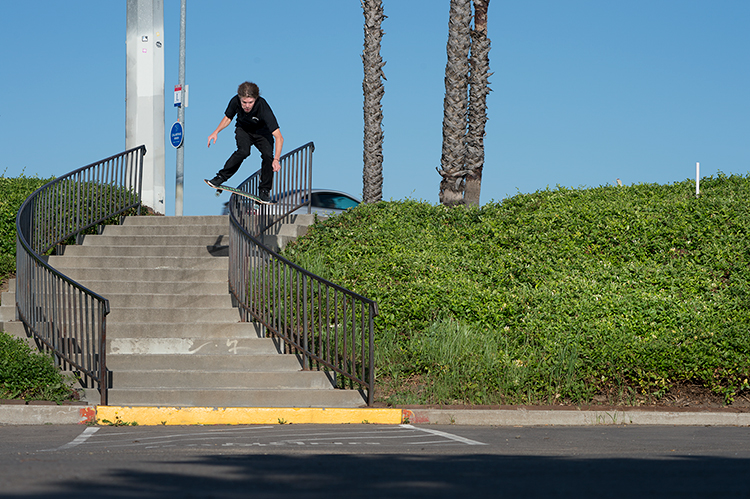 This spot got finished off quicker than a bottle of tequila. Boardslide through the bend     Photo: JT Rhoades 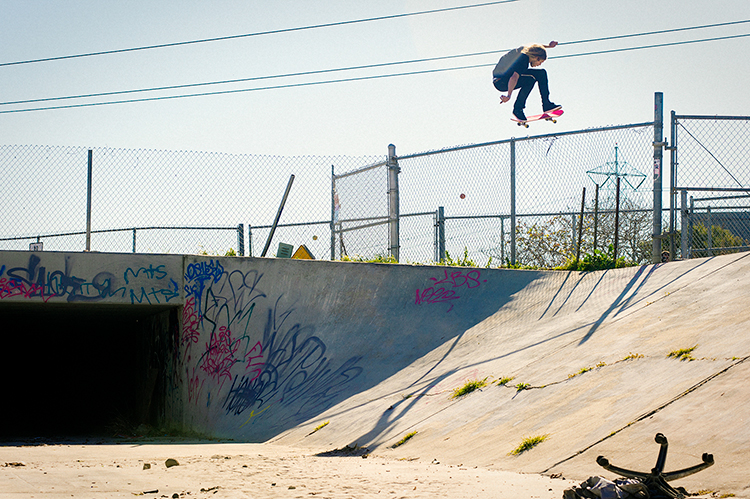 Life's a ditch and then you fly. Ollie late shove it     Photo: Burnett

What did you guys get into after the premiere?
The fam split ways. They headed back to San Clemente and then everyone went back to Collin’s house and fired it off at the Provider compound.

What did you think of the graphics?
They are insane. The camo one is the shit. To have my name in the Deathspray is unreal. Then the speed dealer one with the chicks in it is just next level '80s. I don’t know whose idea that was but I like it. 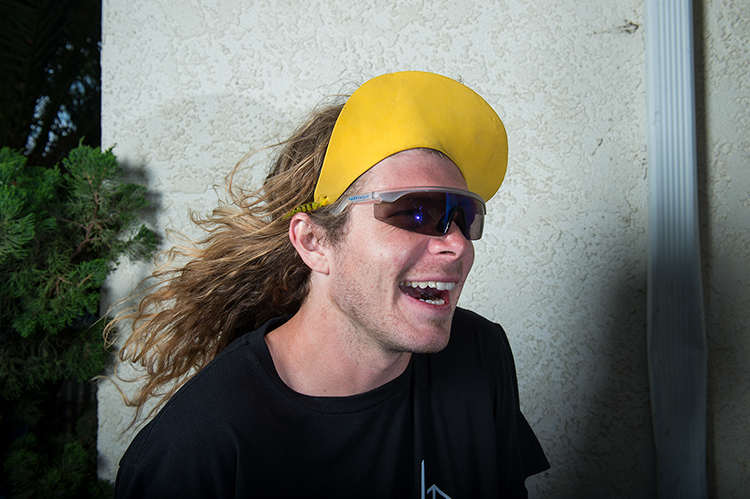 Was it your idea to make the speed dealers for your Happy Hour shades?
Josh was the one that came up with the actual shape, but I knew I wanted a really fast pair of shades. I didn’t really care what they looked like as long as they hauled ass.

Did you think they would catch on as big as they did?
No, I had no idea what was going to happen when we made them.

Which graphic are you going to set up first?
I don’t know. I still feel weird about skating a graphic with my name on the bottom of the board. 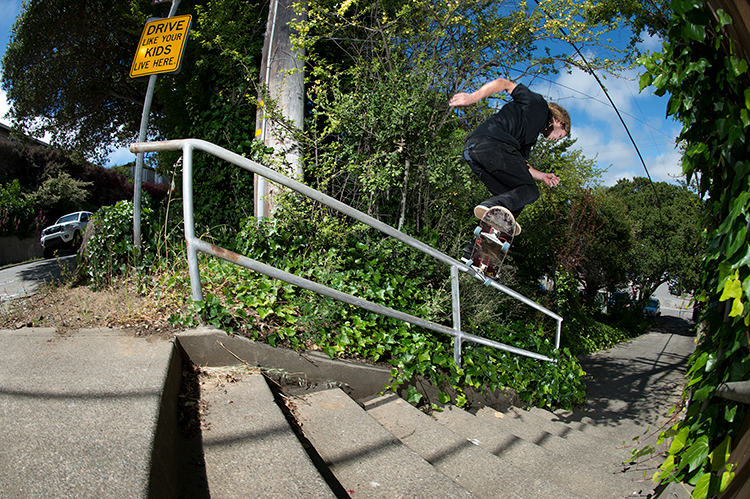 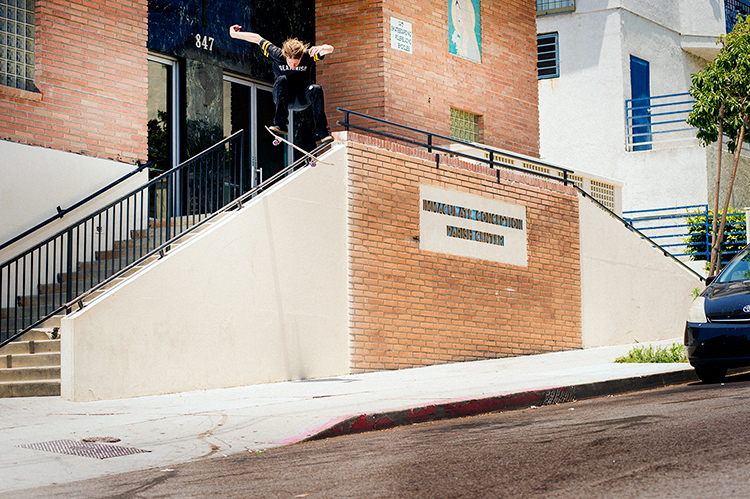 Sorry, Kirby, but when you do frontside flips like this, your dumbass name goes on the bottom of a deck. That's life, kid    Photo: Burnett

Fuck off. That’s what everyone says. You earned it, man.
I’ve always loved the Deathspray logo boards so I will probably go with the one with my dumbass name across it.

Okay, so let’s talk about this part. With just the shit I have seen you do on trips I would assume you had about a half hour of footage. Was it hard to narrow it down to six minutes?
That was all Jacob. I just gave him a song and he chose what to use. I still have enough footage for another part, though, so that’s cool.

When did you start working on this thing?
I honestly can’t even call it. You were there for a lot of it. How long do you think it was?

Check that front truck on the land. That's commitment. Roller coaster ride to cliff jump. It's a 19. We counted     Sequence: JT Rhoades 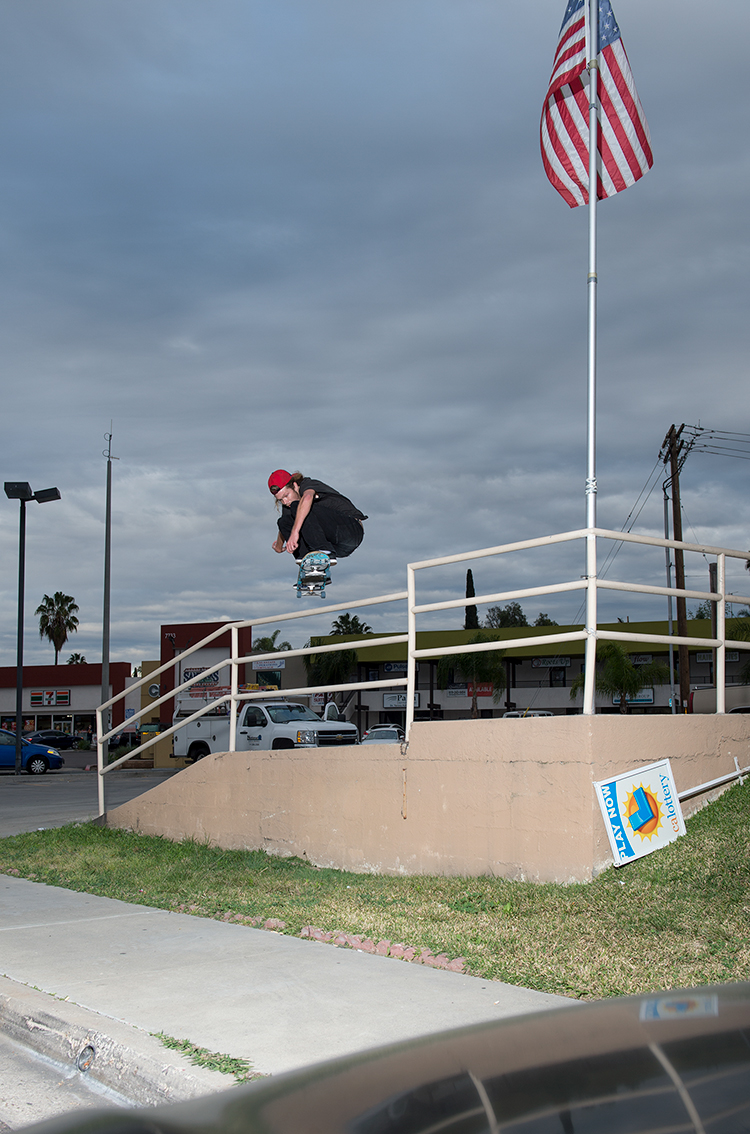 Who needs the lottery when you're winning at life? Ollie     Photo: JT Rhoades

I would say that Southwest trip about two years ago kind of sparked it off. That trip was fucked. You seemed to get a trick at every spot we went to but remember all the hi-jinx?
Never start a trip in Vegas. Jon got taken out by the fence and was out the whole trip.

There was the Lizard fiasco too.
Oh my God. Yeah, at Oasis ditch in Albuquerque. We parked the van on the other side of the fence and he was trying to ollie out and land on the roof. He bailed one and took out the back window and then the dude that was filming for Zumiez or whatever accidently walked over and turned Alek’s camera off thinking it was his or something so he missed the clip. That was fucked.

So, originally this was going to be a shared Deathwish promo with parts from you and Dickson to go with your guys' Thrasher interview last year, right?
That was the plan but things sort of got pushed around and then Jon got on Emerica and had to drop the heaviest part ever. Then I don’t know—nobody was really working on anything, no Deathwish video, no C1rca video, so I was just getting antsy and wanted to put out a part myself. 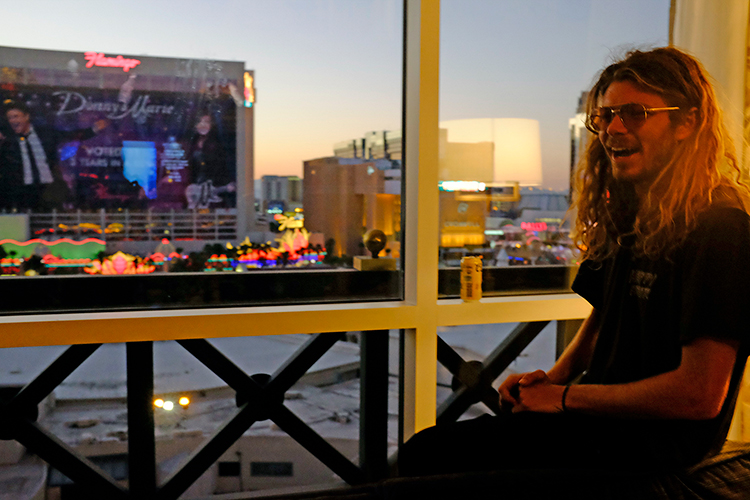 Backside 5-0 shove it for all the Dawgs in the yard     Sequence: JT Rhoades

Did it seem like you were sort of getting slept on a bit?
No, because everyone has shit going on. Everyone is busy and I’m down in Oceanside so it's not like I am in everyone’s face all the time. I am just out skating with Riley and Jacob everyday, skating with the Shep Dawgs.

Speaking of Shep Dawgs, I saw you had footage from that RV trip you guys went on.
That was two weeks of pure chaos. We rented an RV and hit Portland, Boise, Salt Lake and Vegas. We skated spots all day and then Riley’s band played a show every night so there was always something going on. I don’t know if we can ever do another trip that fun with that many people. We felt unstoppable.

You took some brutal slams for this part and had a string of pretty unusual injuries the past few months. What’s been going on?
First I broke my face in two places skating Washington Street, then I was back skating for about a week when I broke my tailbone, then the next month I broke my heel. It was a good three months. 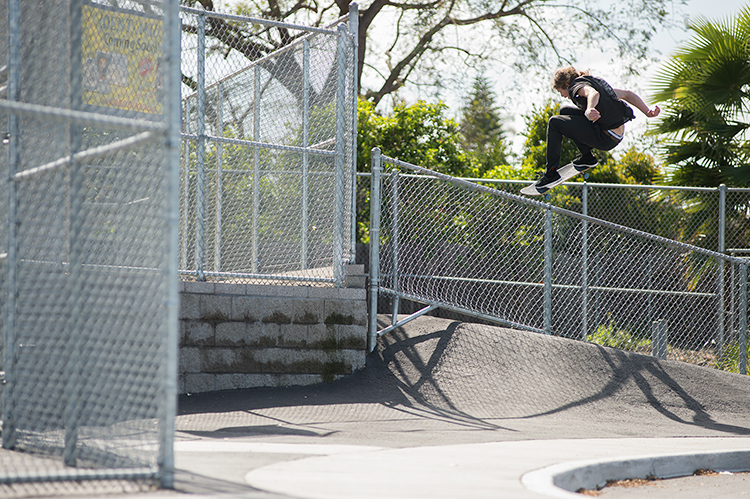 Frontside 360 up and over, unstoppable indeed     Photo: JT Rhoades

How do you deal with those? You can't really put a cast on any of them.
Ice, ice and more ice.

Was that the most time you have had to take off a board?
In the past I have been out two or three months straight, so this time I at least had a week or two of good skating in between. It was just crazy because they were all back to back. I’m good and healthy now, though.

Good to hear. So what’s next?
The Indy tour video is about to come out and then I went to South America with C1rca, so that video should be coming out soon as well. Other than that, just keep skating with the Shep Dawgs. A lot of the guys have full-time jobs now but we will definitely be coming out with more videos.

Can’t wait to see 'em. Anyone you want to thank?
I want to thank Deathwish, my parents and the Shep Dawgs. I’m speechless. It has been three or four days now and I still can’t even form a sentence.