Five years have passed since Titus released their last full-length video, Tightass. With their new offering, Ups and Downs, team riders Jost Arens, Patrick Rogalski, Jeremy Reinhard, Vladik Scholz, Yannick Schall and Markus Blessing have all pushed themselves and their skating to the next level. The video began with a trip to Lisbon a few years ago and since then videographers Dennis Ludwig, Max Pack and Anton Beliaev (and others) have worked tirelessly to document every banger the team could knock out, with Severin Strauss editing the final offering. We hit up Yannick, Markus, Vladik, Jeremy and Jost and asked them about this project. —Thomas Gentsch 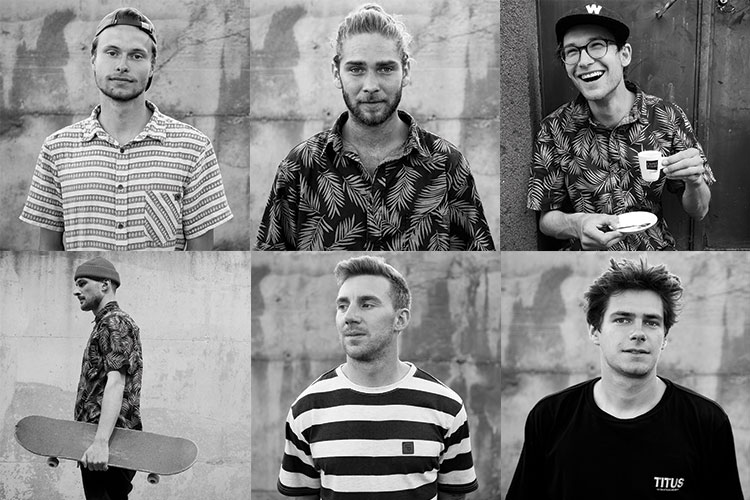 The Titus video Ups and Downs has been in the works for years. Was it more ups or more downs to you?
Yannick Schall: Definitely more ups than downs. It's always a pleasure to travel and skate with all these guys!

Markus Blessing: Damn, I got my first trick back in 2016! For sure there were way more ups than downs.

Jost Arens: Man, too many good times to count, but tough times as well.

Vladik Scholz: Of course there’s always going to be ups and downs when you’re filming a video project. As long as you're having fun, I find the ups and downs are still pretty enjoyable.

Jeremy Reinhard: It was pretty tough because I filmed for the video for two years, while the other guys had maybe three or four years. I started filming when I heard the video had to come out soon. Regardless, for me it was more ups. I enjoyed every trip with the guys. Always fun times! 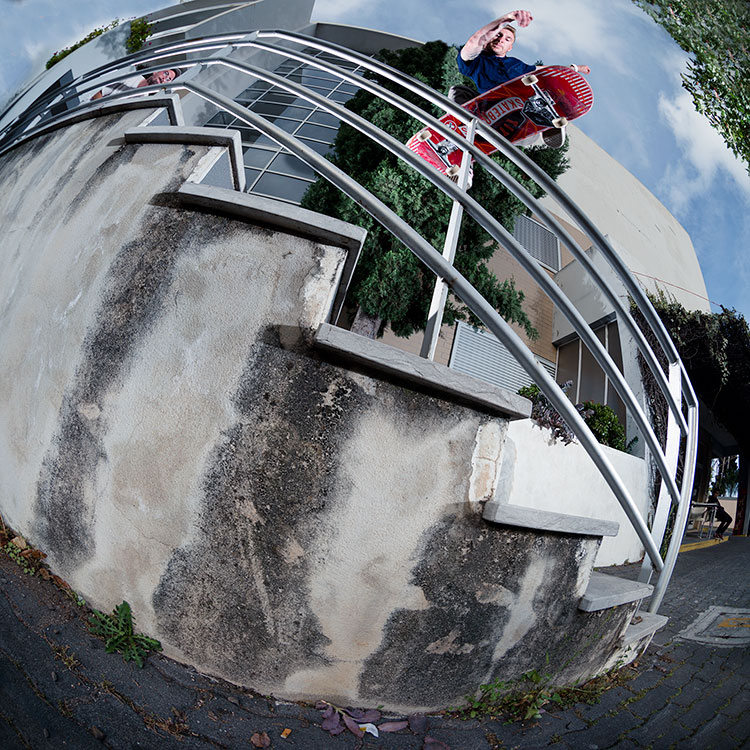 Yannick going up then down, nollie front board    Photo: Scholz

What was the biggest down for you in that timespan?
Yannick Schall: Probably the end of filming and putting the video together. I can’t tell you where my head has been the last few weeks before the release.
Markus Blessing: Definitely when I missed almost the whole Madeira trip because of a heel bruise.
Jost Arens: I can think of one trick in particular: a fakie flip down a double set in Barcelona! I battled it for, like, two full hours before finally taking a break. I came back and did it after three tries.
Vladik Scholz: It was actually just a two-year project for me, as I was the last of us who was finishing up an earlier Titus project. I had some downs, but they aren't worth mentioning. Mainly ups.
Jeremy Reinhard: Man, it's always a down when you get hurt and realize you can only skate for a few days on a trip. Like arriving at the perfect spot and you can't skate, but it's all a part of it! 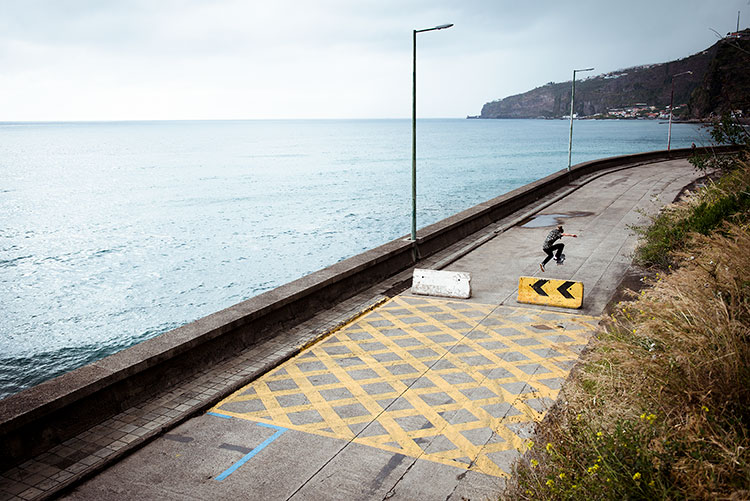 The arrows point to the left but Patrick does not comply    Photo: Scholz

Was the last trick in your part the most difficult? If not, which trick did you have to work for the hardest?
Yannick Schall: No, the last trick actually wasn’t the hardest. I remember putting in a lot of work for a few of the lines—and for the nollie nosegrind! It started raining the first day I was trying that and it was tough.
Markus Blessing: Yeah the last trick probably was the hardest. There were a couple of tricks I had to do several times until they looked acceptable, but fortunately I never really needed to go back to a spot to get a trick I didn't land.
Jost Arens: That fakie flip in Barcy was probably the hardest. I'm just not very good at fakie flips—but, damn, I had to land that.
Vladik Scholz: I'd say I put the same effort into all of them.
Jeremy Reinhard: Maybe the last one, actually, although it was one of the first tricks I filmed for the part. 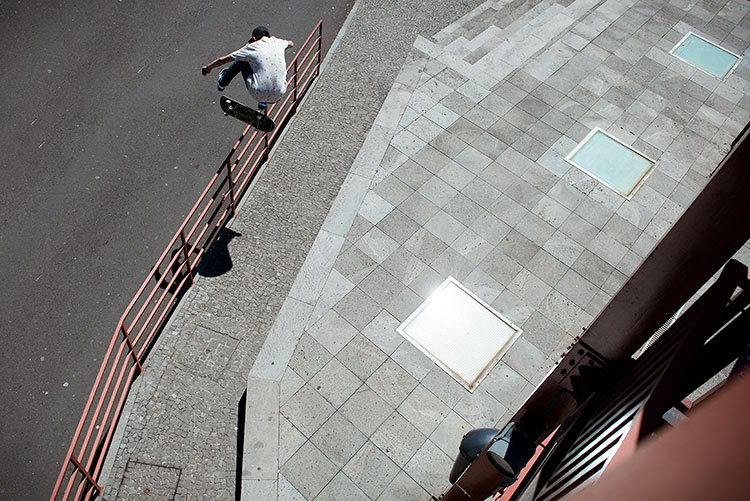 Not the hardest trick in his part but Jeremy’s kickflip is still pretty tough    Photo: Scholz

What was the biggest up for you?
Jost Arens: I was just super hyped to see some of the photography that Dennis Scholz took during the project. It was dope that my homie Justin Sommer was part of the project a bit as well.
Markus Blessing: When Rocco won 264 beers for a switch flip in Madeira! The team celebrated so hard that I‘m not even sure if it was a switch flip anymore!
Yannick Schall: Definitely the release. But while filming, it was definitely our trip to Madeira, Portugal. We had so much fun on that island. Good vibes the whole time, though!
Vladik Scholz: To me, every up is the biggest up in that special moment. I enjoyed every one of them while making the video.
Jeremy Reinhard: I can't say there was a biggest up specifically. I really just tried to get some fast lines! 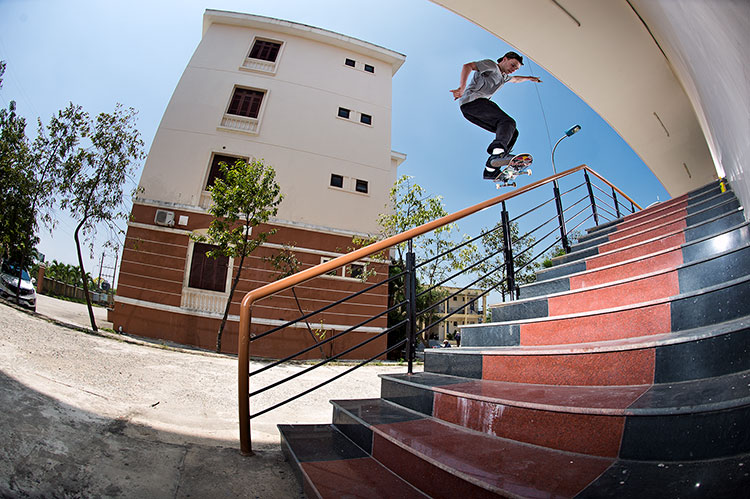 No time for slippin’ when you’re back lippin’—Jost slides into success     Photo: Wagner

Who's the biggest clown on the team?
Yannick Schall: Hands down, Jeremy Reinhard! He’s the oldest but most entertaining guy on the team. He never shuts his mouth and he’s a must-have in the van on every trip!
Jost Arens: Jerry! He's the oldest dude but he knows how to party.

Markus Blessing: Probably Jerry. He‘s so funny, an absolute legend.
Vladik Scholz: In my opinion, Jeremy is definitely the funniest guy on the team!
Jeremy Reinhard: Patrick might be the freak of the crew—or maybe I am the clown? 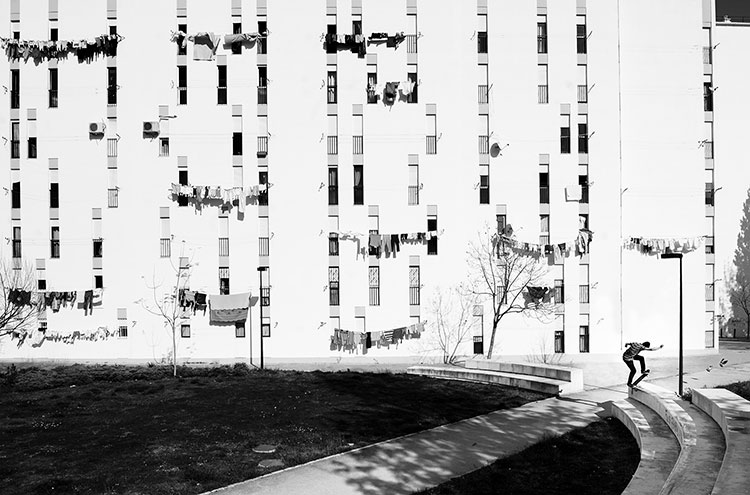 Jeremy hangs a front blunt out to dry     Photo: Wagner

Who do you think is the most calm and collected guy on the team?
Yannick Schall: That would most likely be Markus. He's always super focused and tries his tricks calmly until he gets them. He's also one of the best guys to share your room with.
Markus Blessing: Vladi keeps the smiles, always!
Jost Arens: Rocco!
Vladik Scholz: Markus is definitely that person. He's the type of guy to go buy the whole crew some cold ones just to cool down.
Jeremy Reinhard: I think everyone tries to keep calm, but Markus always tries to keep the harmony. He keeps everyone cool in all situations! 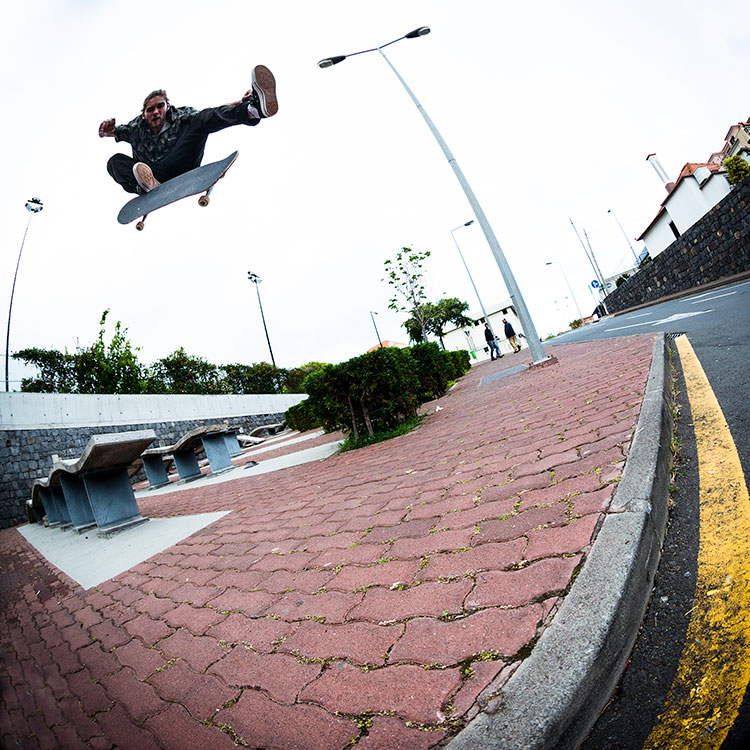 You can keep your dojo; Patrick kicks it on the streets! Kickflip    Photo: Scholz

Did anyone ever get lost in the nightlife? Any missed flights or anything like that?
Yannick Schall: Not too many missed flights, but definitely some heavy partying. This one night in Madeira, one of our filmers came home around ten in the morning and fell asleep in the garden. Nobody could wake him up! He missed the whole day and didn’t know where he was.
Markus Blessing: Everyone got lost somehow at some point, but I would say the filming dudes were the most danger prone.
Jost Arens: I feel like everyone got caught up at some point!
Vladik Scholz: Someone always seems to get lost or be super late, but as far as I can remember, nobody missed a flight.
Jeremy Reinhard: There were too many crazy party stories! The craziest one was in Regensburg: we all woke up in this youth hostel and Patrick was covered in blood! I think he was boxing with a window the night before. While he was getting his arm stitched up, Vladi tried to nollie heel this big three block in front of the hospital for two hours. After that, Vladi was pissing blood because of slamming on the impact. I'll never forget that Bavarian tour! 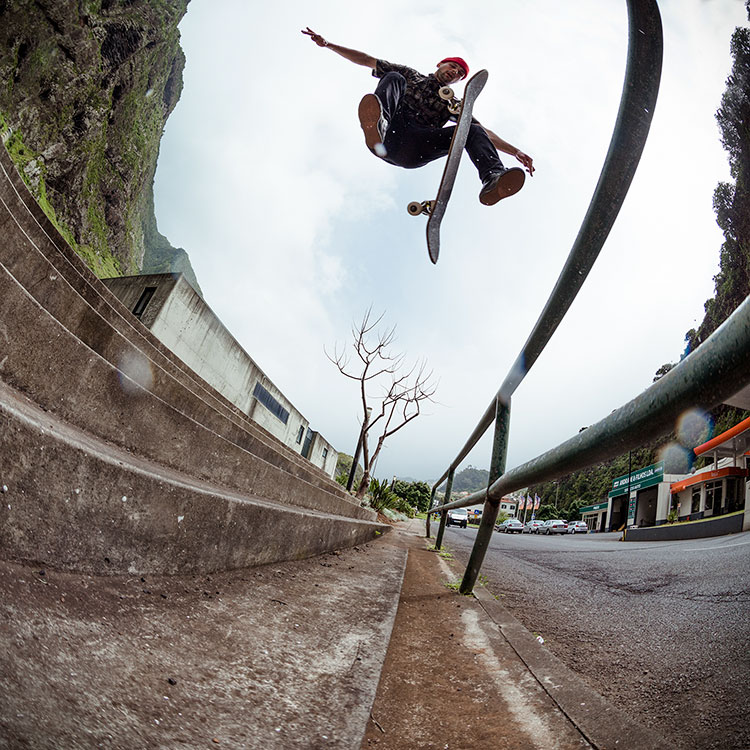 Vladik storms a 360 flip while the rain sets in    Photo: Scholz

You traveled quit a lot for this video. What was the most amazing place you visited?
Yannick Schall: As I said, Madeira was super sick, but I also really enjoyed the Copenhagen trip, even if I was hurt most of the time. Copenhagen is just amazing!
Jost Arens: Lisbon, period.
Markus Blessing: Madeira was so nice; that was an amazing trip. Concerning getting tricks for the video, though, Lisbon treated us really well.
Vladik Scholz: Madeira was the most amazing place for me, for sure! It's a super beautiful island. I would have stayed there longer if I could.
Jeremy Reinhard: I think Lisbon and Madeira were the best for me. I really liked Portugal. 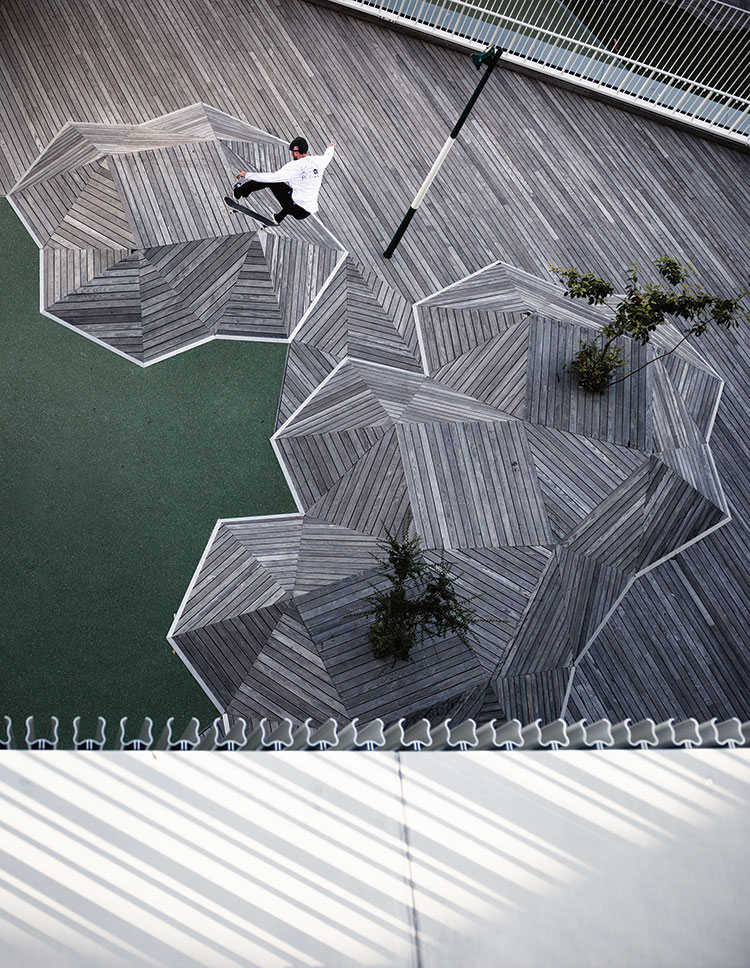 A geometric gem unlocks a backside flip for Vladik. Who knew math could be fun?    Photo: Scholz

Did you go to any countries or places that you didn’t like?
Yannick Schall: There wasn’t a place I truly didn’t like, otherwise, why would I travel there?
Markus Blessing: Nah, just good times.
Joost Arens: No, it was all good!
Vladik Scholz: No.
Jeremy Reinhard: Every place we went to was nice! 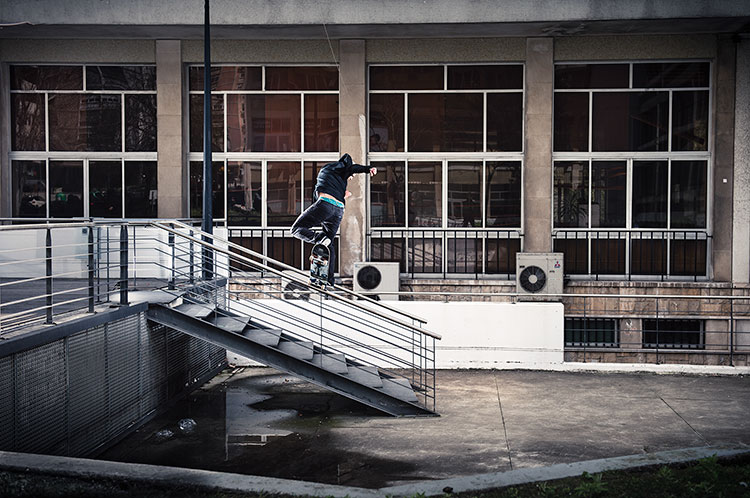 Markus blessed this rail with a backside noseblunt. It’s all in the back toe    Photo: Wagner

Who do you think worked the hardest for their part?
Markus Blessing: I wish I could name myself, but I think Vladik and Yannick went the hardest.
Jost Arens: Vladik.
Yannick Schall: I would say Vladik. He really spent a lot of time traveling and searching for the perfect spots and tricks, and I think it shows in his part. His part gives me goosebumps!
Vladik Scholz: Yannick!
Jeremy Reinhard: I think everyone worked hard for it. Patrick had the most footage and he's one of the most productive ones, for sure. Jost is just super talented. He has amazing control for his age, even when skating big stuff. 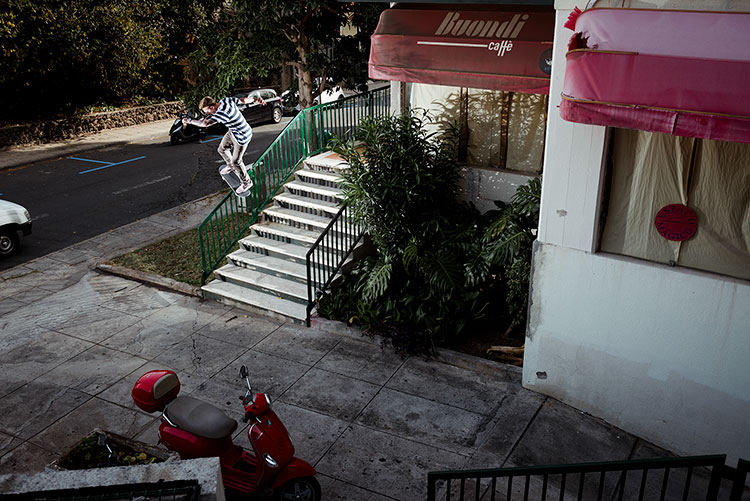 Yannik gives himself the goosebumps with a gap to lip. The ups definitely outweigh the downs. Good job, gents!     Photo: Scholz