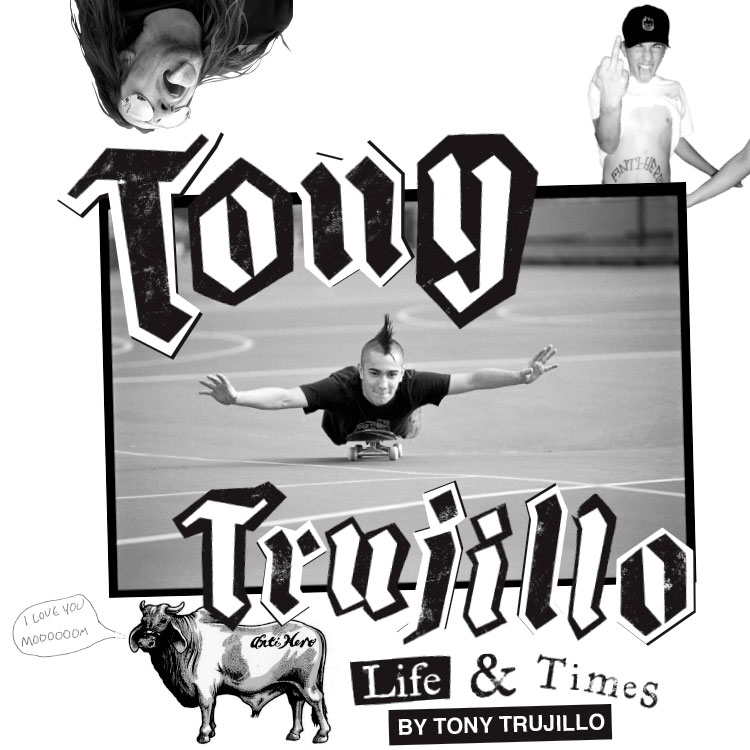 I started skating in 1988 when I was six. We lived on ten acres in Sonoma County. If you’ve ever been there you would never in a million beers think there could possibly be a skate scene—but somehow there was! There were at least three halfpipes within a square mile but not one curb or parking block, so naturally I became a transition skater. 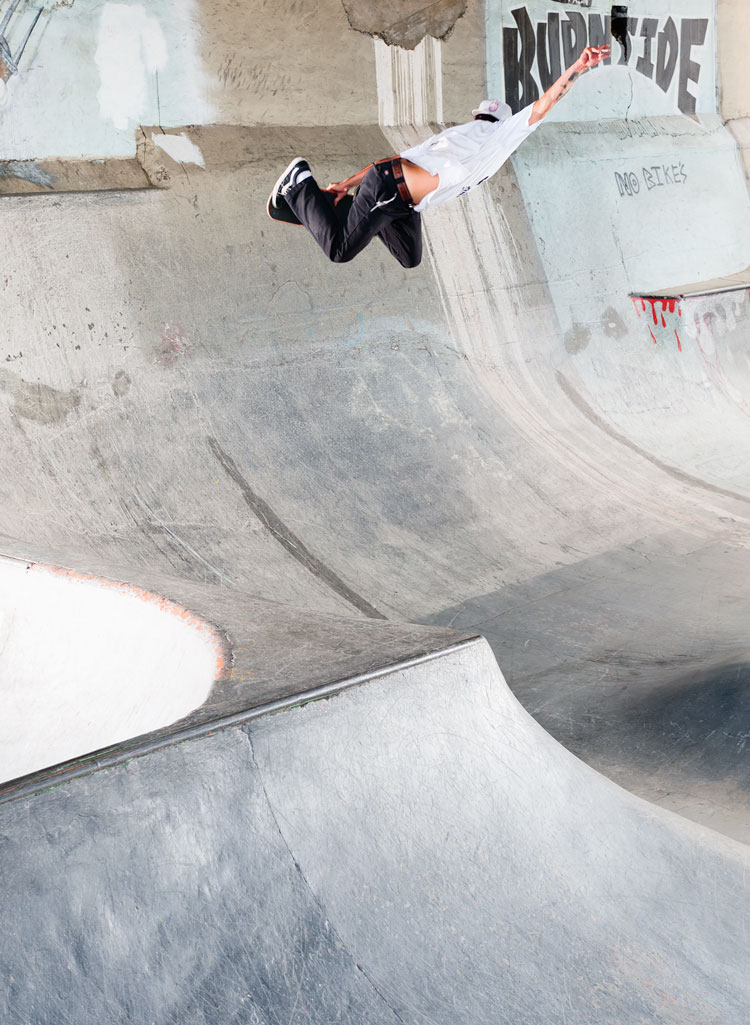 SANTA ROSAIn 1994 the Santa Rosa skatepark was built and it was only 13 miles from my house. My mom or dad would drop me off on the weekends and I’d skate for eight hours straight. This is where I met everyone that would influence and inspire me, guys I’m still good friends with. Hours and hours of dorking around, learning new shit, goofing off, flirting with girls—Santa Rosa skatepark was the nexus of my universe. 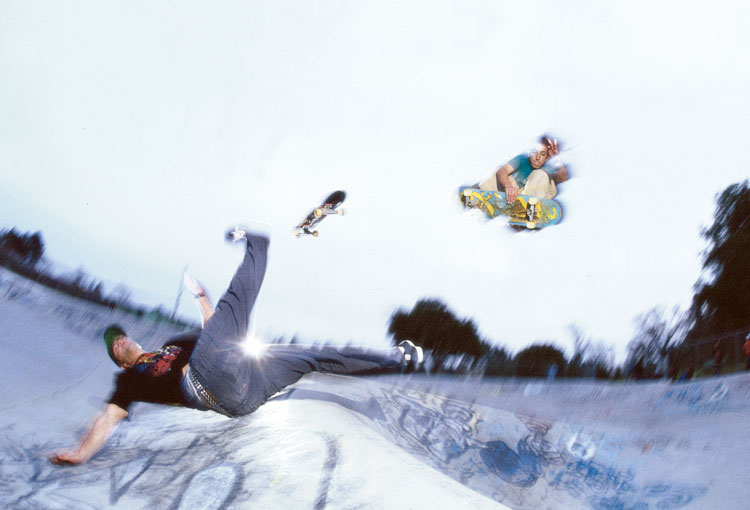 This flailing man is my best bud, Isaac Kenyon. He took me under his wing when I was a kid. This photo completely captures what good times we had at Santa Rosa and is also my very first photo in a magazine. Thanks, Adam     Photo: Wallacavage 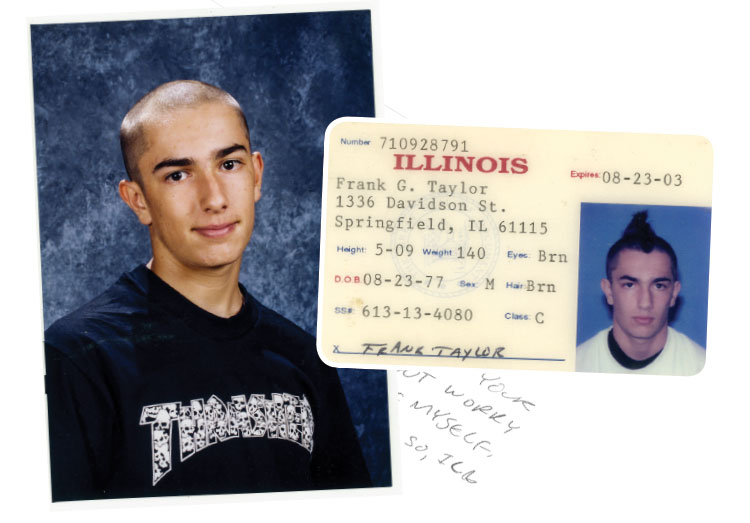 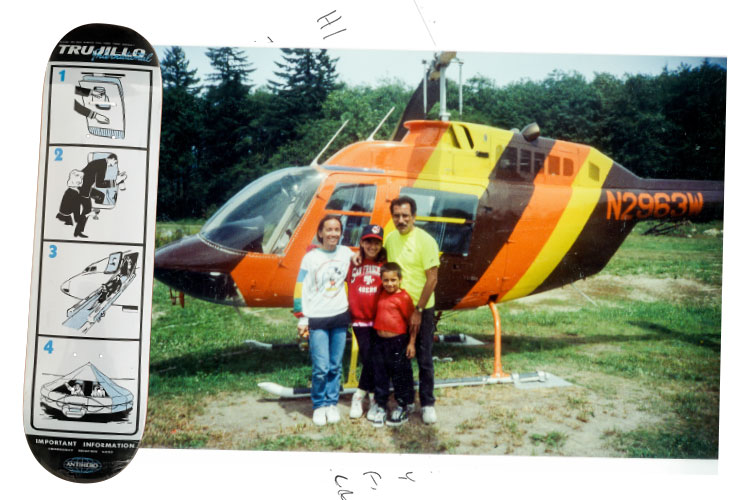 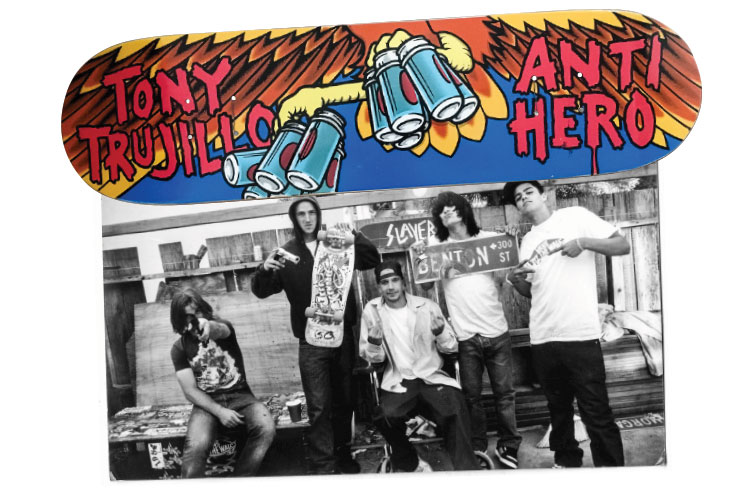 PRIZE MONEY I used to be into them. As far as skate contests go, I’ve taken home my fair share. The first time I went to Marseille I took first in the bowl riders comp. and then I reeled in a Tampa Pro first-place trophy. Thrasher Skater of the Year, the very first King of the Road team win and the 40,000-dollar first-place prize at the Boost Mobile contest in Las Vegas. Upson and I won the most prestigious doubles mini-ramp contest at Beach Road in Bondi Beach, Australia too. 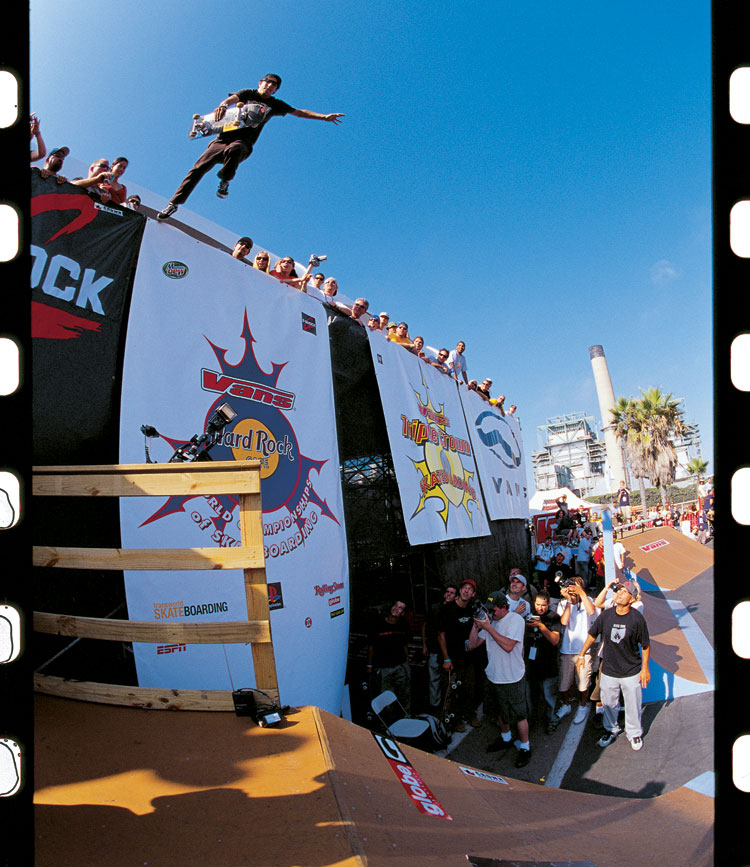 Young dumb and full of cum—when the Deluxe squad convinces you jumping off the balcony will win you the contest, ya do it. Huntington Beach, CA. 1999, 16 years old     Photo: Burnett 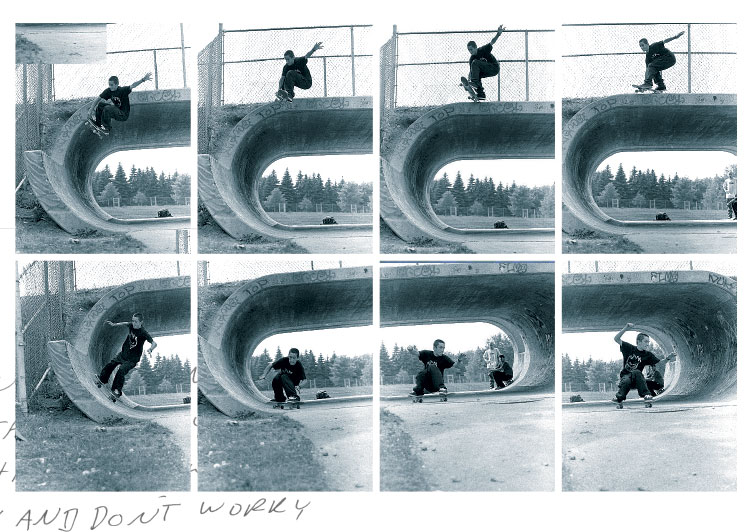 Santa Rosa park gave me no lip-trick talent, so I flew or dropped at this point. Frontside into Big O in ’97     Photo: Morf 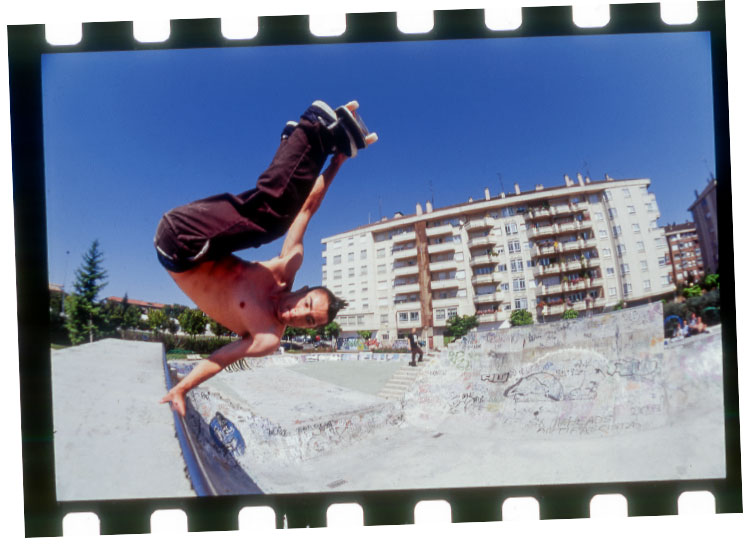 Victoria, Spain 2001. I don’t remember being able to do frontside inverts at this age but Morf gives my brain a flash drive. Thanks, homie     Photo: Morf 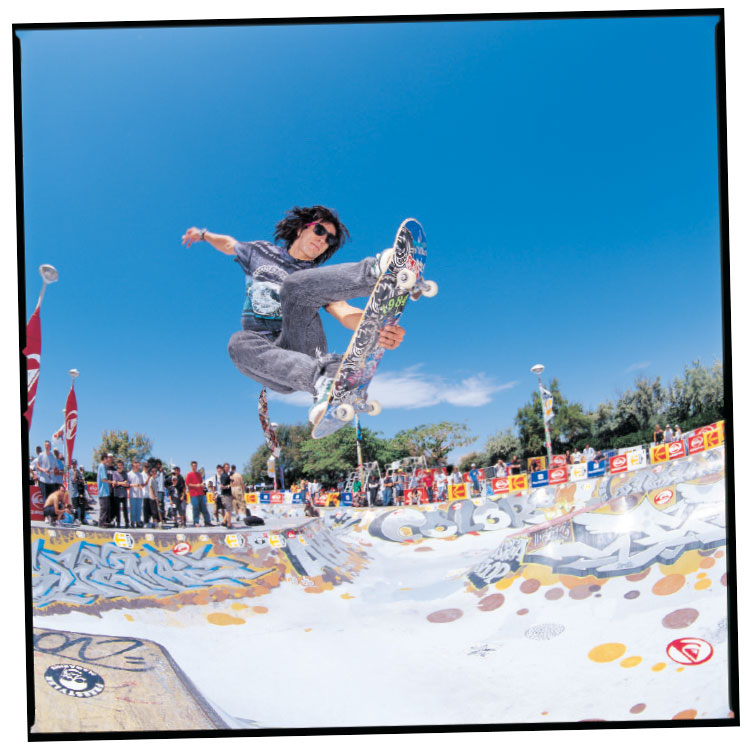 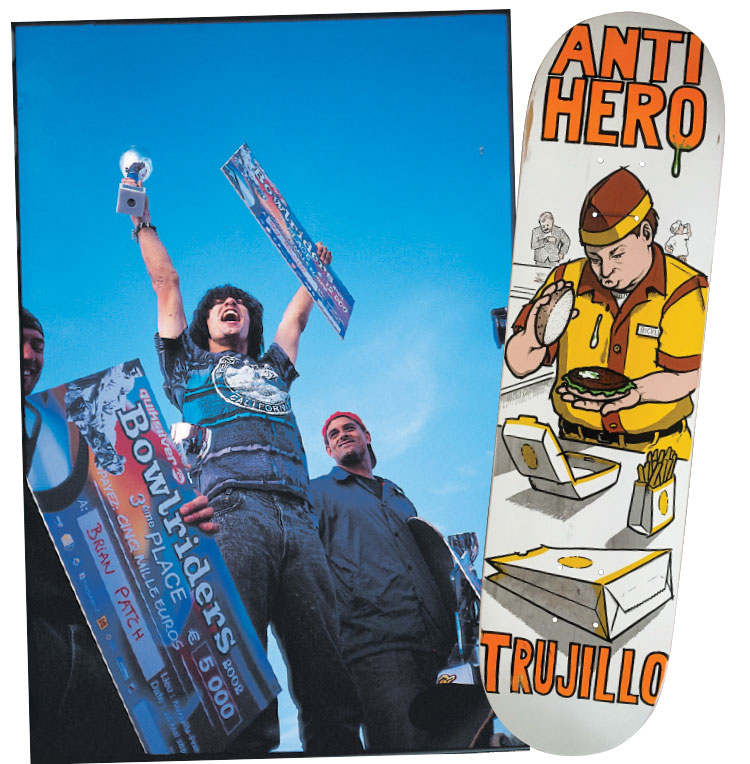 First time to Marseille in ‘02. Entered for fun, came out 1st     Photo: Burnett 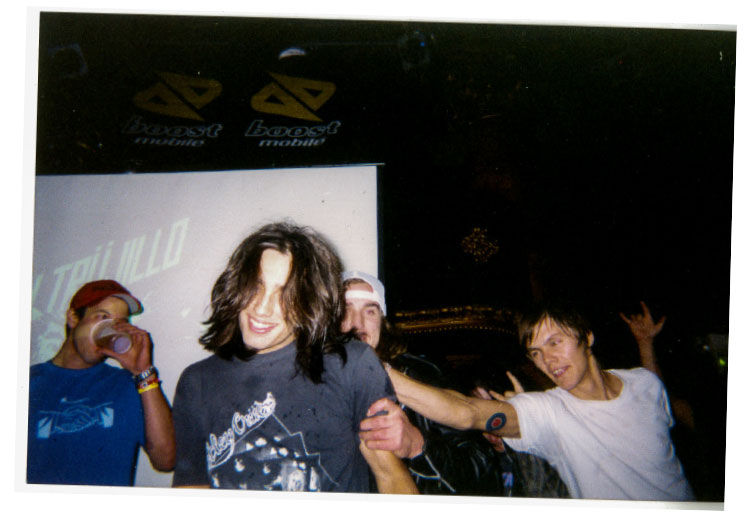 14 AND LIFE TO GO Eventually, my buddy Jesse and I started making skate videos. In ’96 we put together my sponsor-me tape and sent it to Antihero. Never got a response. I saw Bob Burnquist at The Grind in Sacramento and I personally handed him a copy. A week later my mom got a call from Mic-E Reyes, saying he wanted to flow me Antihero and Spitfire gear. I couldn’t believe it when my first box came. Holy fucking shit! When I was 14, my mom drove me to SF to meet Mic-E at Clown Alley. There, in that shitty restaurant, my momma handed me off to Mic-E and my life has never been the same. 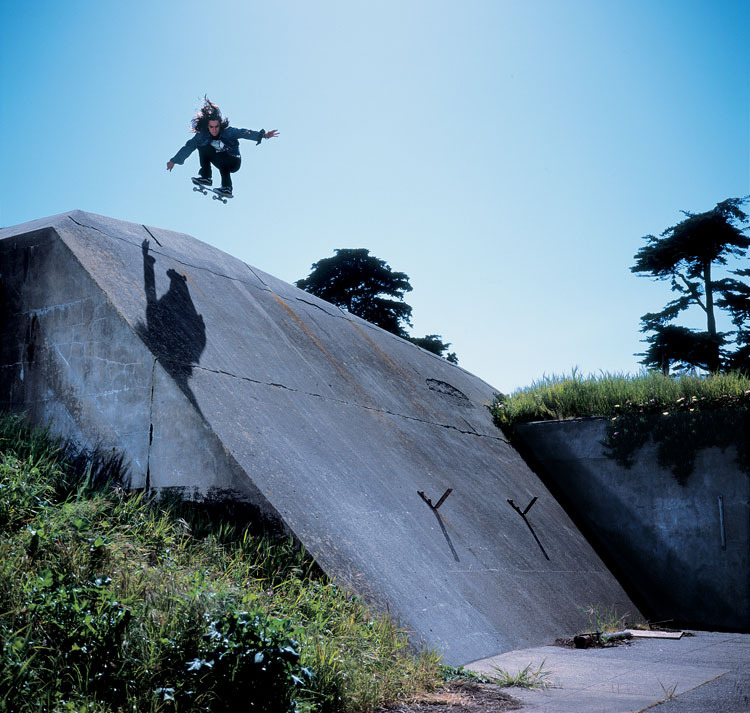 Doomsday prepping with the jean jacket on in ‘03. Be ready for the cheese grater if ya stack at the bottom of this one     Photo: Morf 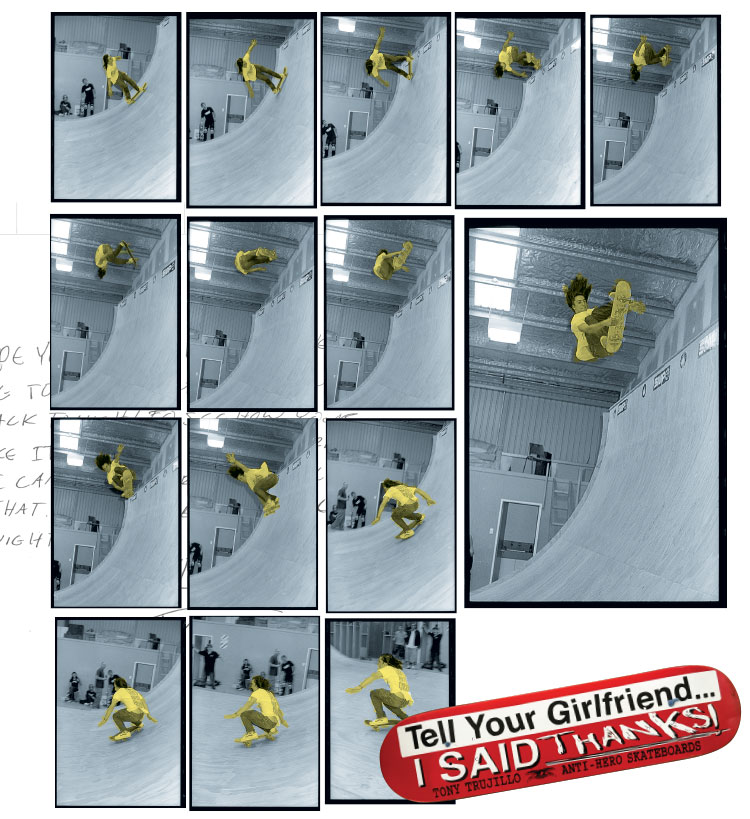 Upson was watching my technique on my first ever 540 attempts in New Zealand in ‘02. After running out of a few he goes, “I’ve done the same exact thing. You ain’t got it.” Not pretty but I’ll fucking take it. And fuck you, my friend     Photo: Ogden

JUMPED IN My first Deluxe summer tour was in ‘97 with Quim Cardona, Ethan Fowler, Andy Roy, Danny Gonzalez, Mic-E, Gabe Morford and Christ Pastras. We went straight from SF to Montreal for a pro contest. I saw everything that a 14 year old should never see: intravenous drug use, blackouts, hookers and gang fights. I was obviously too young to go out partying in bars, so I would just eat with the team and then go to sleep. One night, all of these motherfuckers barnstormed my room after the bar, rolled me in a bedsheet, dumped me off the bed and started punching me. I was a little confused, but then again—not really. 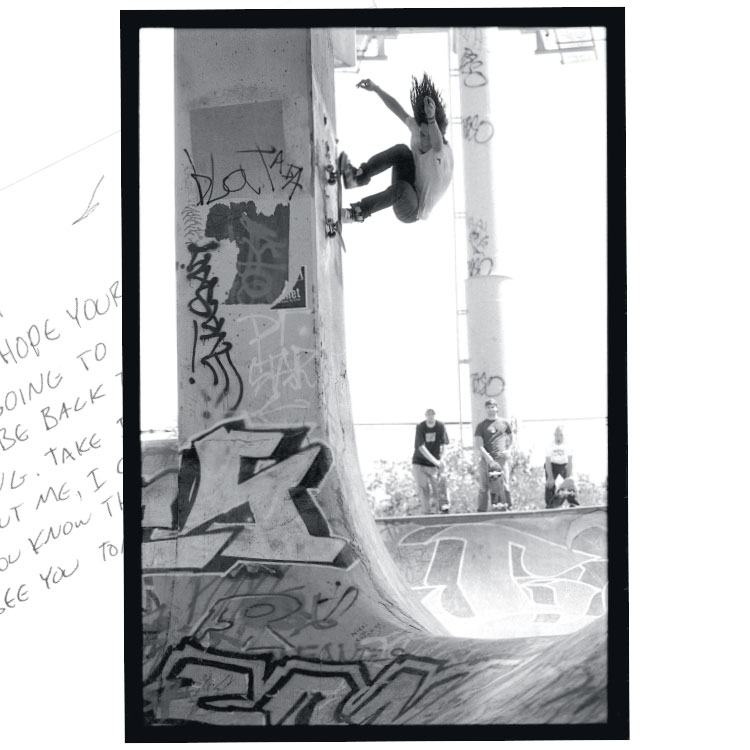 FDR has always been good to me. Thank you, Philly. Frontside thrust    Photo: Tobin 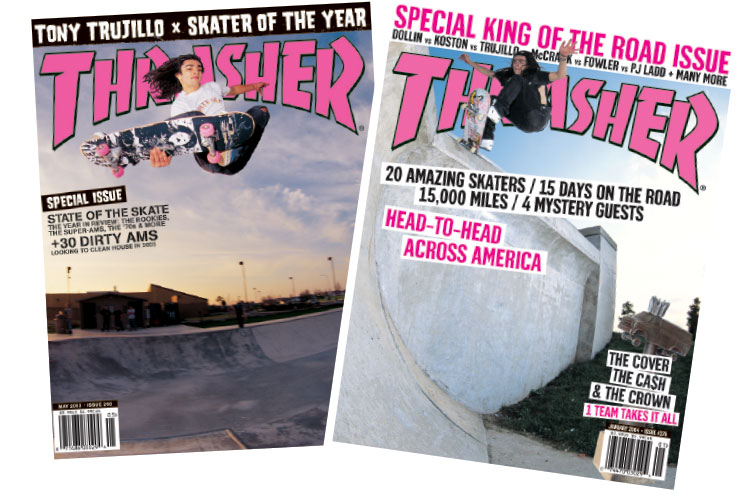 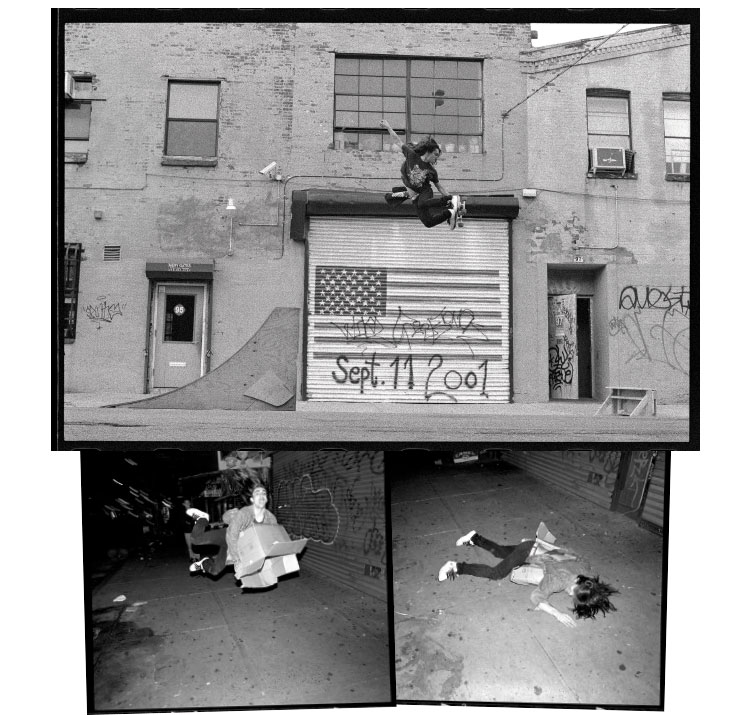 This was the day after the New York blackout in 2003 and the first day of the first KOTR. America. Fuck yeah     Photo: Morf 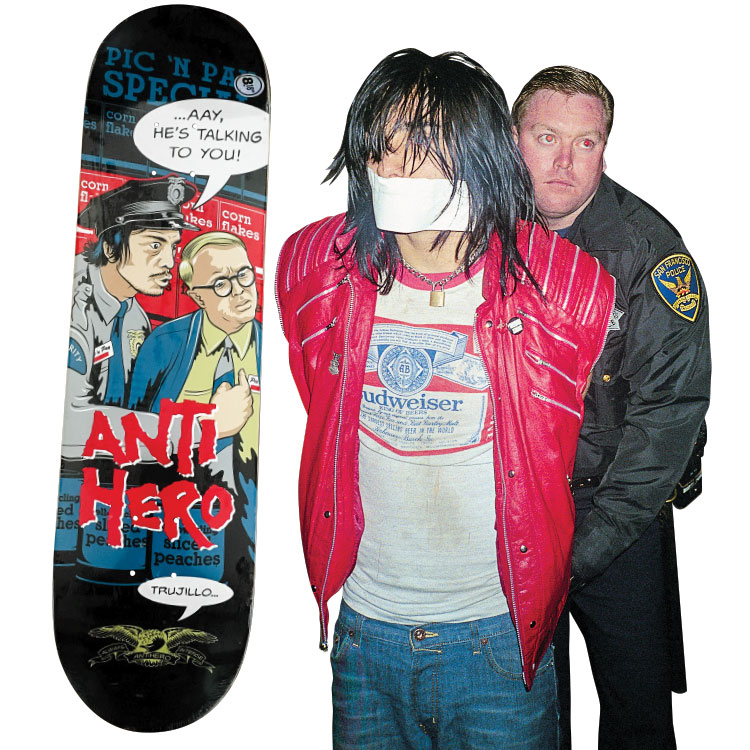 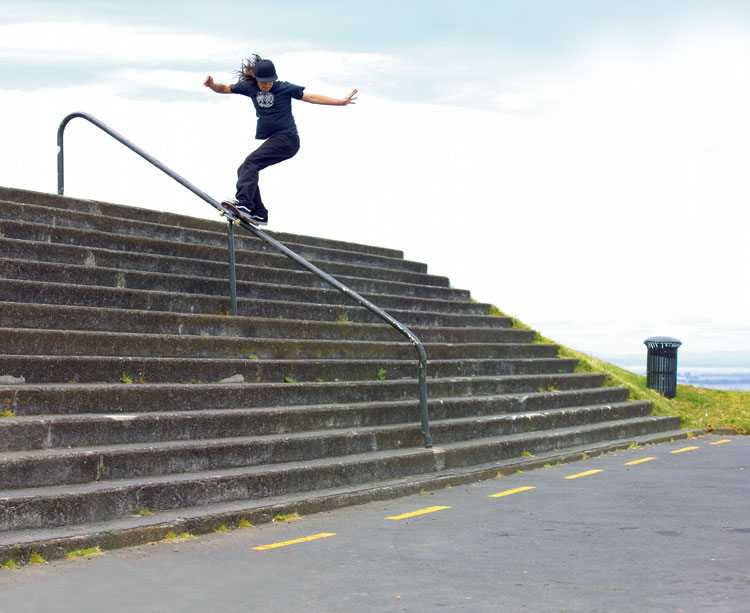 I like myself a steep rail. Straight off the plane in N Zed to this fucker. Torn miniscus and PCL. Skated the rest of the trip. Ten days of painful torture. Worth it. 2005     Photo: Ogden 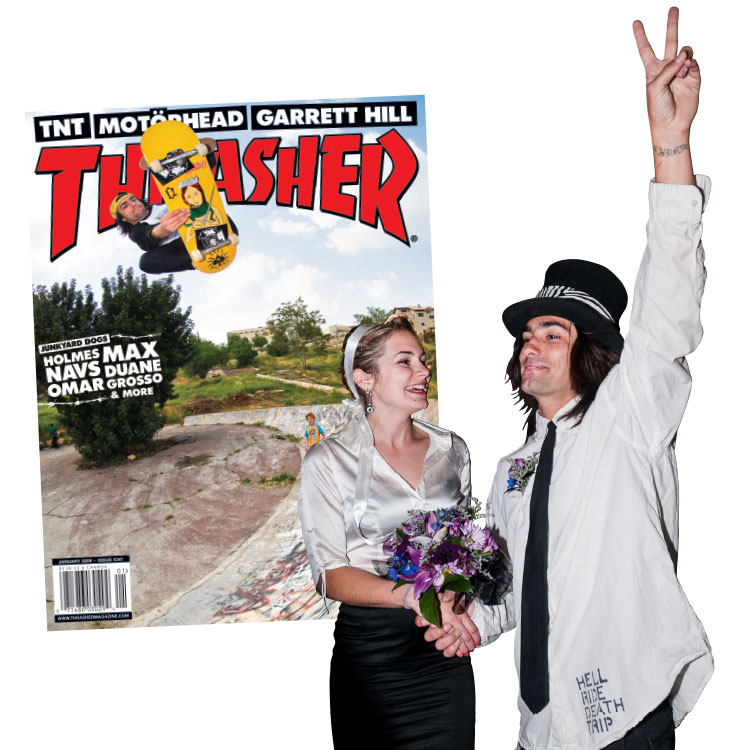 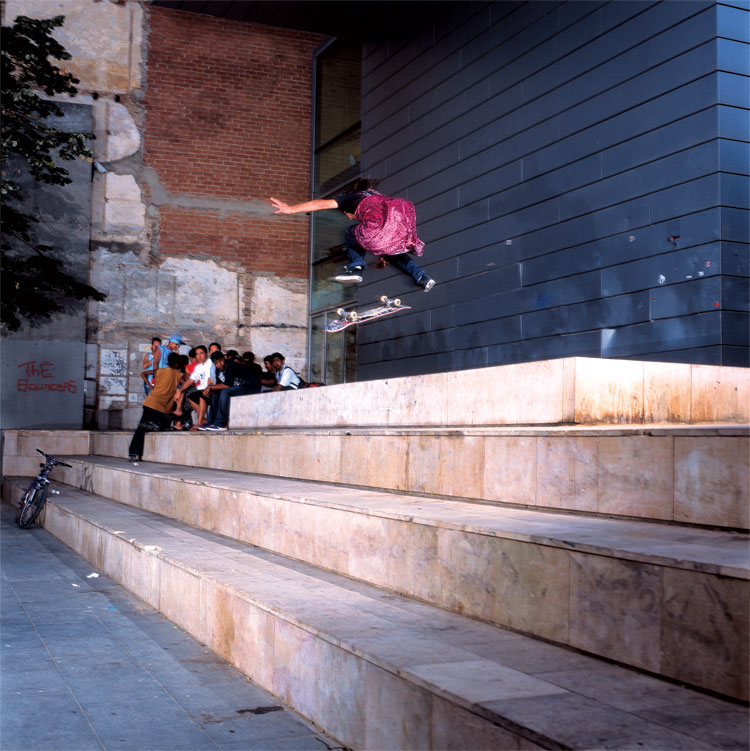 Hewitt and I defected from the Blue Thing crew and kicked it at MACBA. Day drinking and hanging with crust punks lead to me taking this chick’s dress, putting it on and nollie flipping the big four in ‘05    Photo: Morf

WAYWARD SON The Greyhound Mental Breakdown trip in ‘99 was one of my favorite trips of all time. Brian Seber, Tim Upson and I each got hooked up with a Greyhound Ameripass. For 450 bucks you could get on or off any Greyhound bus in the US for 30 days. We went from Maine to California—listening to GG Allin—from Sid Abruzzi’s mom’s basement to 4th of July at FDR, from sleeping at Grand Central Station to skating Columbus, OH, with Donny Humes, to hitting Silverton, CO, with Windel and 100 places in between. It was indescribable. For me, that trip really showed me what I already assumed I was: wayward. I had to go back to high school afterwards and it was impossible to see eye to eye with anyone. I just kept quiet and silently heckled the problems those kids thought they had. 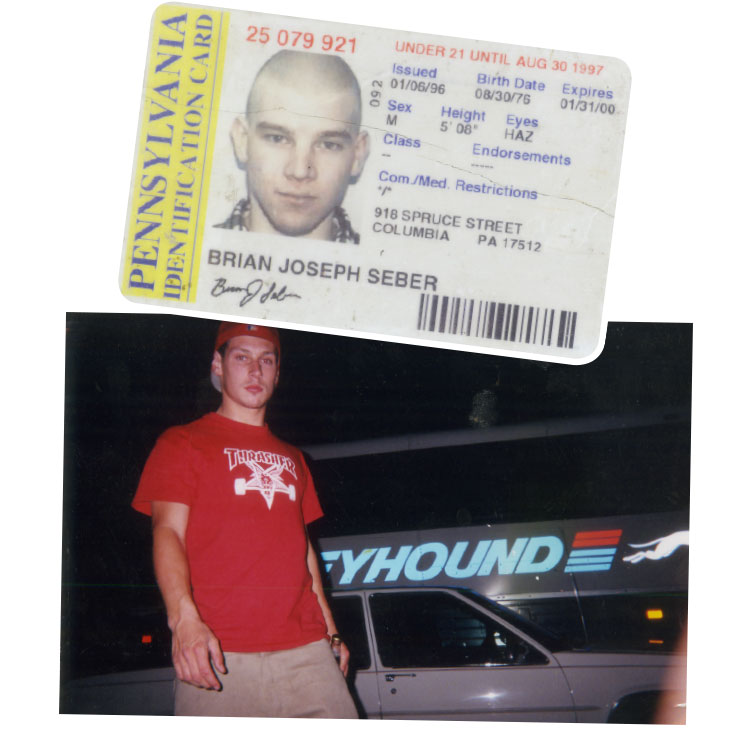 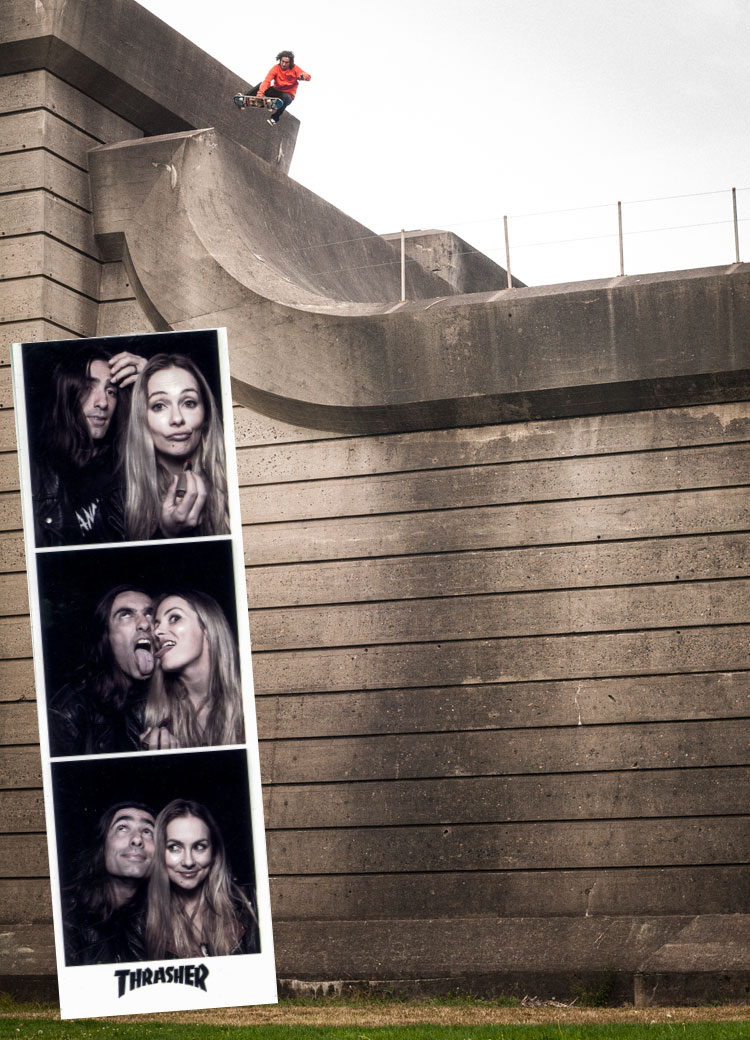 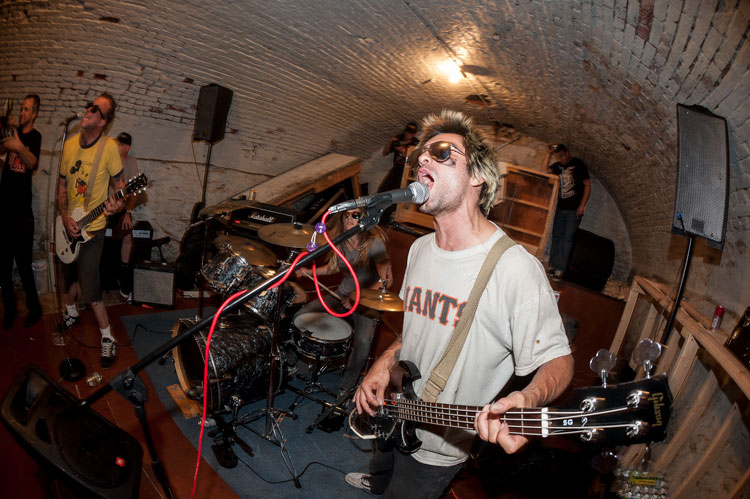 BACK ON THE BUS I was gonna straight-up drop out of school my junior year. My mom said I could, as long as I passed an equivalency exam and get some sort of diploma—which I did, and said later to school forever. I still have dreams that I’m back in school, at my current age, trying to finish. I moved in with my dad for a while up near Santa Rosa until I got an apartment with my buddy Jesse. I bought a car with no license and totaled it into a telephone pole, drunk on Jack Daniels at 1:00pm after I’d gotten home from a Tampa Contest. DUI. Back to public transit, which I didn’t mind at all. Still don’t. 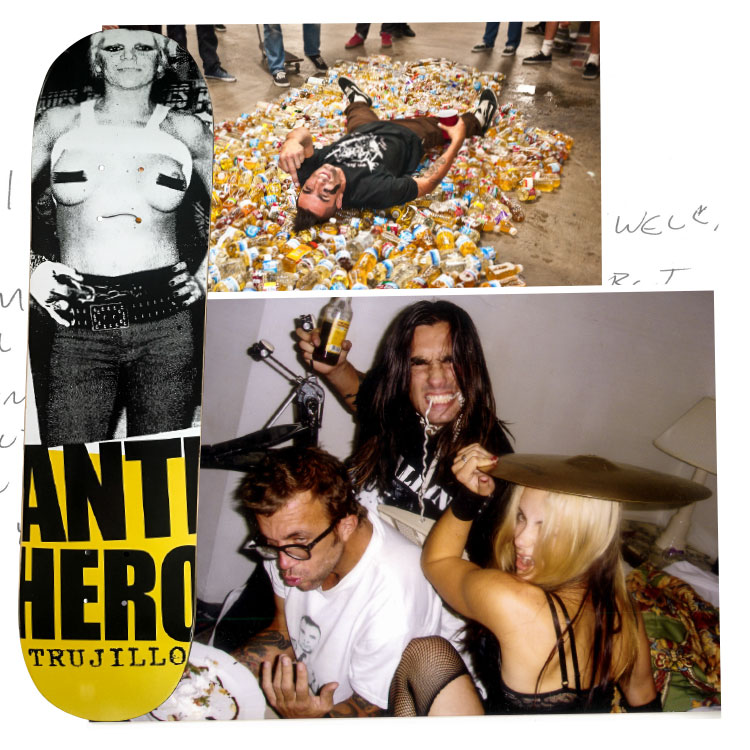 Many don’t know but Bad Shit was formally constructed in Hollywood. This is the first band photo ever—after a party where we stole Trixie from her former band     Photos: Hammeke

CORPSE PAINT Two-thousand-five was a major year for me, both personally and for skating. The Antihero Blue Thing European tour was fucking insanity. Our first stop was Bologna, Italy. We got there and realized there was a huge metal fest going on a quarter-mile from the skatepark. I was reading Lords of Chaos at the time and I channeled what I got out of that book into my skating. I’ve never felt more comfortable on a board than I did on that trip. While we waited for a train in Lyon, I got a local to give me a scooter ride to go get some corpse paint for our next stop, Marseille. At the contest, Phelps and I mentally formed a band. He said, “I got the guitar. You got the bass. Figure out the drummer.” I told him I had a friend who would be down. I called her up when we got back Stateside. The rest is Bad Shit. 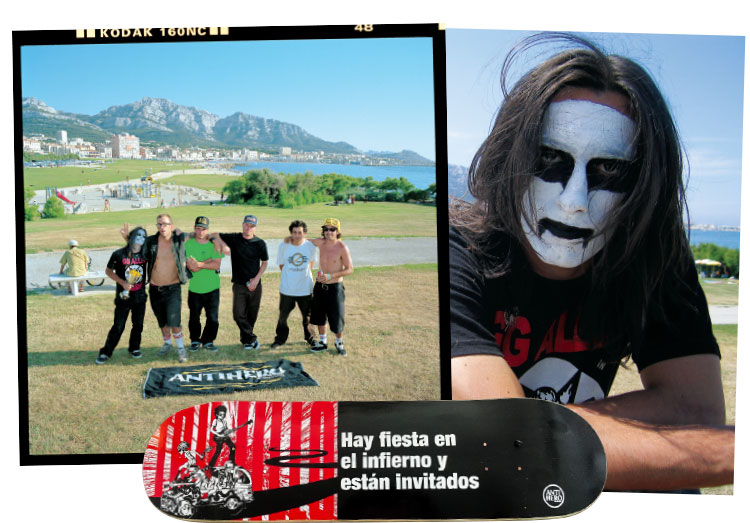 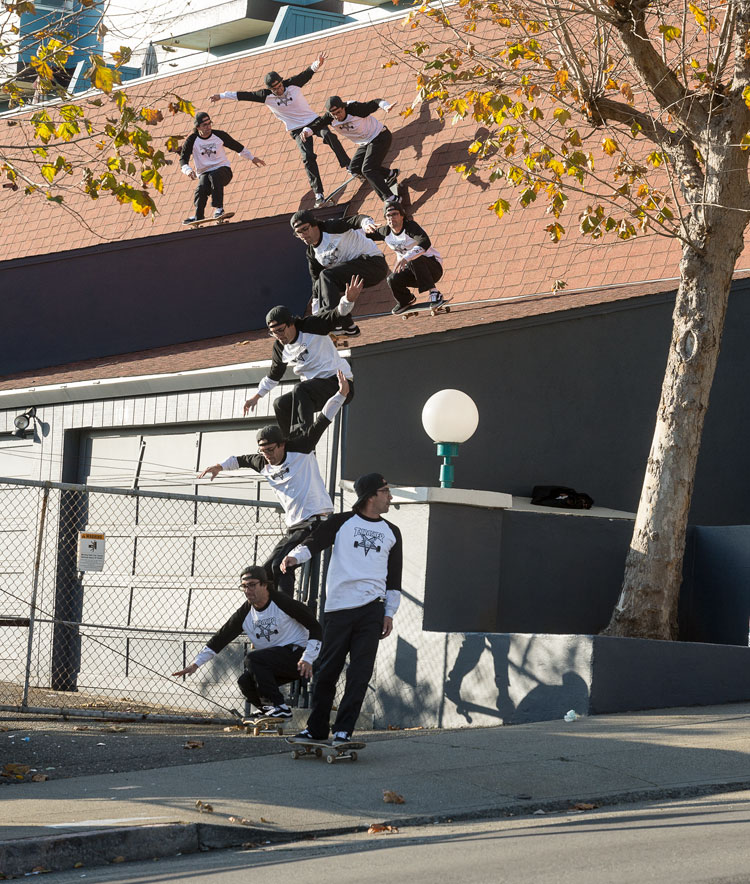 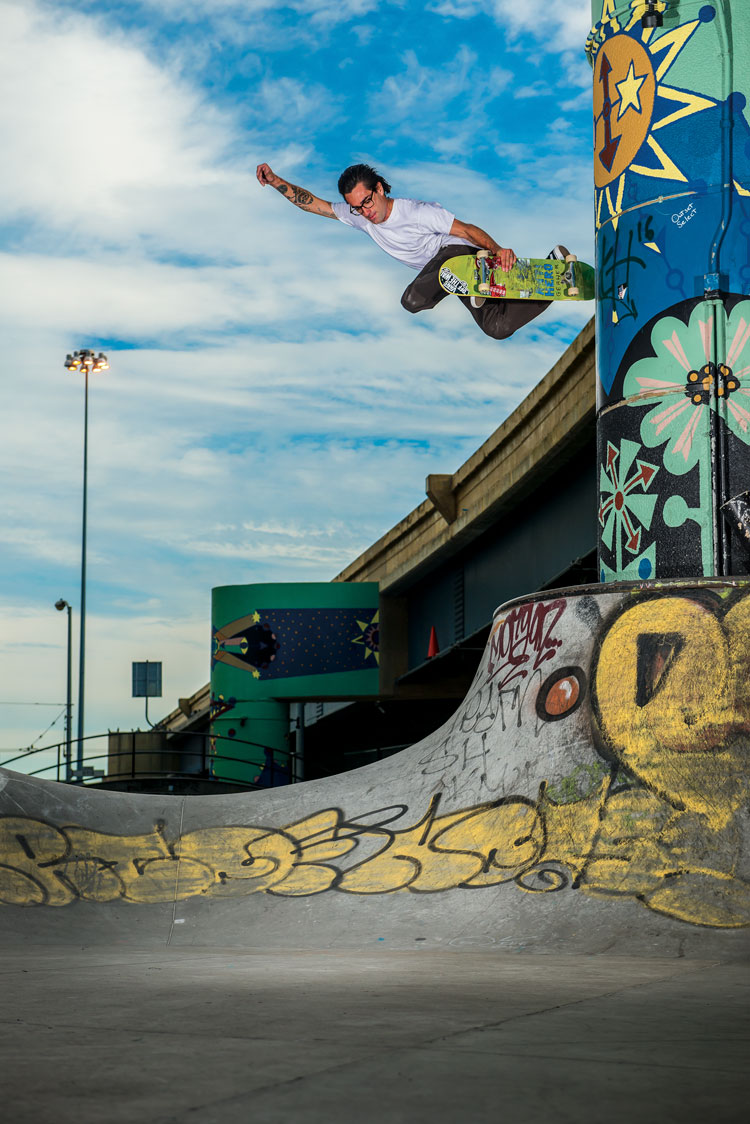 THAT’S ON YOU From the Greyhound tour to skating contests, King of the Road to Bad Shit, Beauty and the Beast to Tent City and Propeller, I’ve had every advantage. But advantage doesn’t make you a good skater—it’s how you skate. Shit done changed these days, though. Skaters appear on SLS and promote themselves by posting up selfies smoking blunts and posing with cute dogs. If it works for them, hey, that’s all good. But I have my own personal heroes that I respect because they kept a low profile. If others wanna put you on blast, that’s fine, but when you’re at the wheel driving into the intersection, that’s on you. 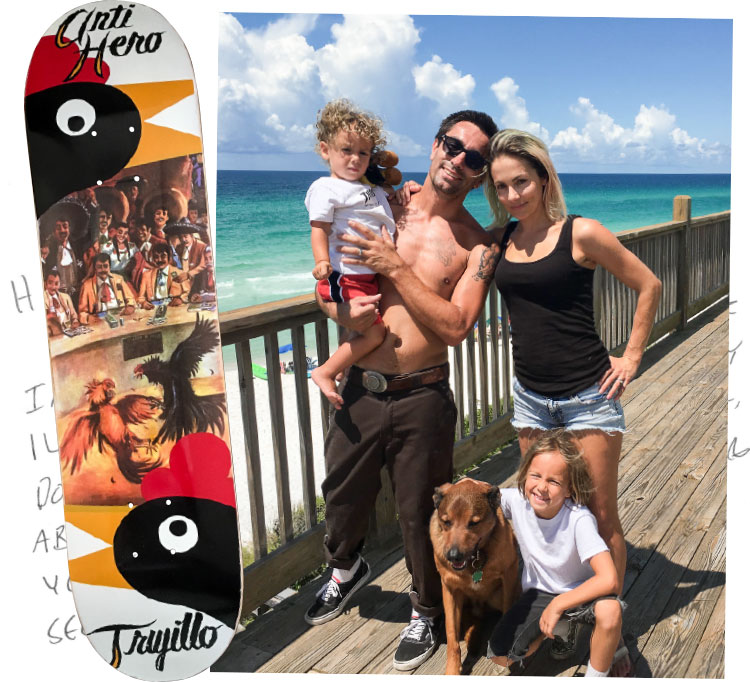