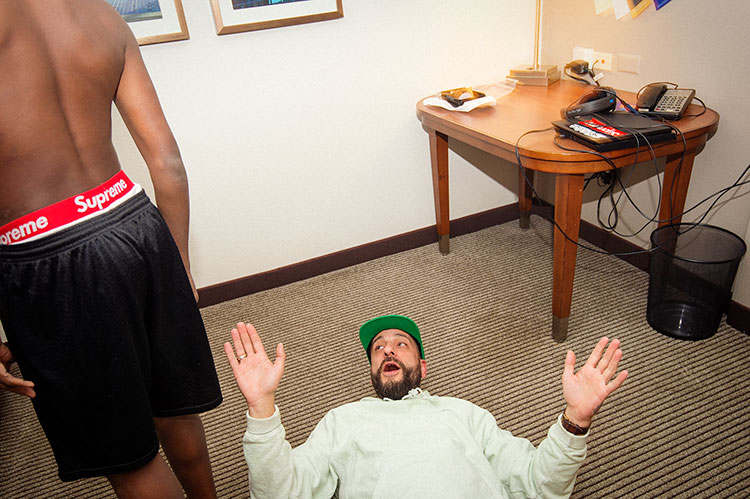 How did your time as leader of a prison gang help you with your job as a Vans team manager?
I was never in a prison! I was in a crisis center in the Bronx. My life was in crisis!

And then you took out the biggest dude in there and became the king, right?
Yeah, El Presidente. They called him El Presidente and he was like an Evander Holyfield doppelgänger and he hated me. I told him to stop telling me what to do and that he wasn’t my dad and then he freaked out on me. I was 20 years old and the only white kid in a crisis facility in the Bronx. So yeah, I figure if I could handle that, unscathed, I can handle anything—especially Kader.

What are your biggest concerns when you’re dealing with Kader. Let’s go down the list.
Number one, we just want him to skate and not crawl under a rail. 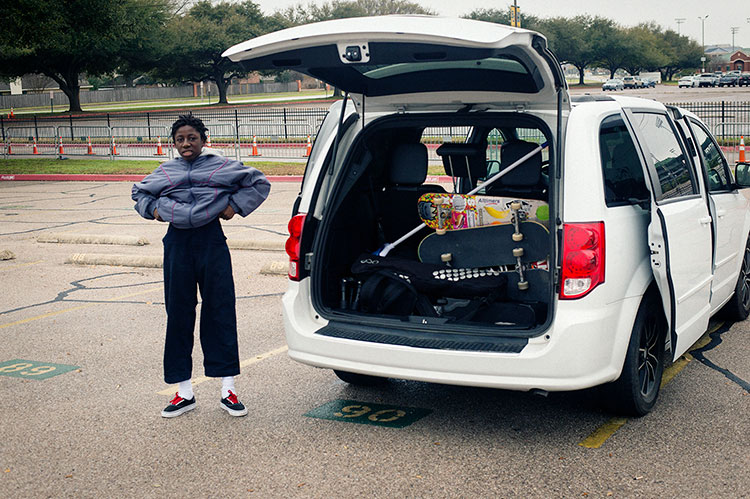 Yeah, what do you say to him when he crawls under a rail. How do you get him out?
He doesn’t say much when he’s under there but I try to reason with him. I’m a 41-year-old man trying to reason with a 16 year old. Number two, we’re trying to keep him away from anything he can smoke, any vapes or any alcohol-related products.

What about eating? I know it’s sometimes hard to get him to eat his breakfast.
He doesn’t eat anything! He orders so much food and then eats half his meal. He stays up all night drinking soda so then he’s not hungry all day.

What’s a typical Kader meal consist of?
Pomegranate seeds and pizza. He’d eat two bites of pizza and then nibble on the pomegranates all day long. 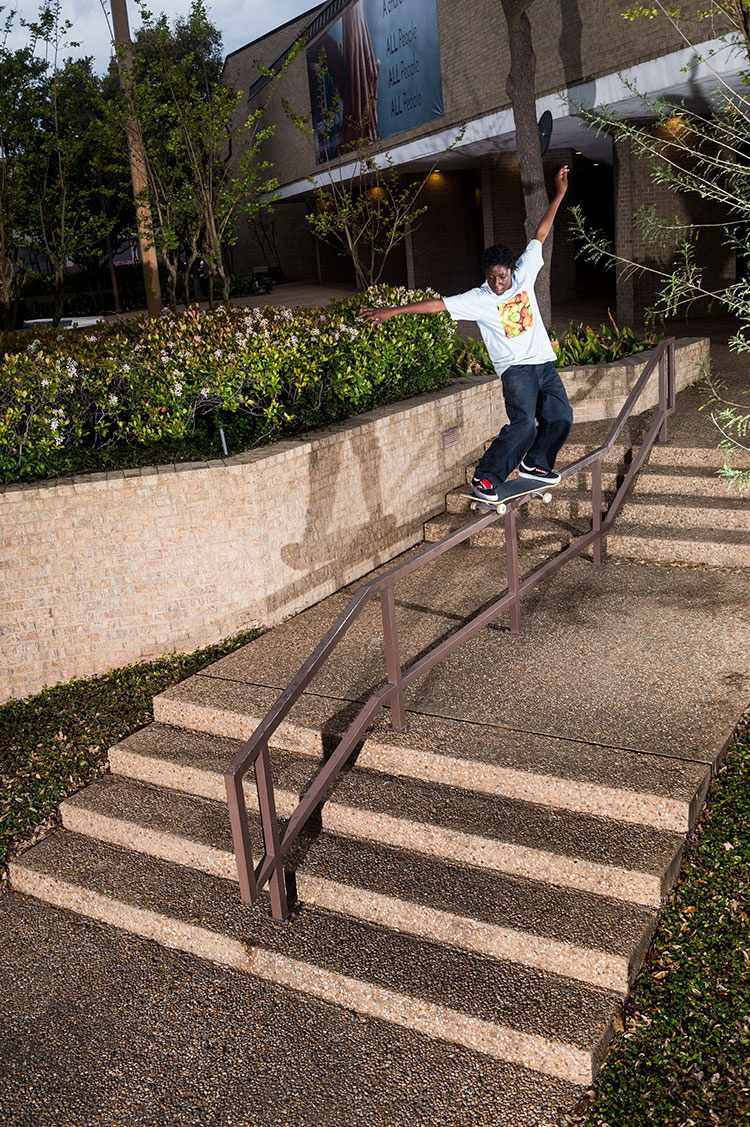 Sounds like what a toddler would eat.
Yeah, I don’t know how you skate all day on pomegranate seeds.

What about video games? Are you worried about those?
Yeah, and I’m worried about anyone who has to room with Kader, which is usually Justin Henry, because they have to hear him playing video games all night. He downs a couple of sodas around ten o’clock and then he builds a Fortnite fort out of the furniture. It’s like an office chair on top of an ottoman or anything that can let him see the screen. He plants down with his headset on and starts screaming, all hopped up on caffeine. 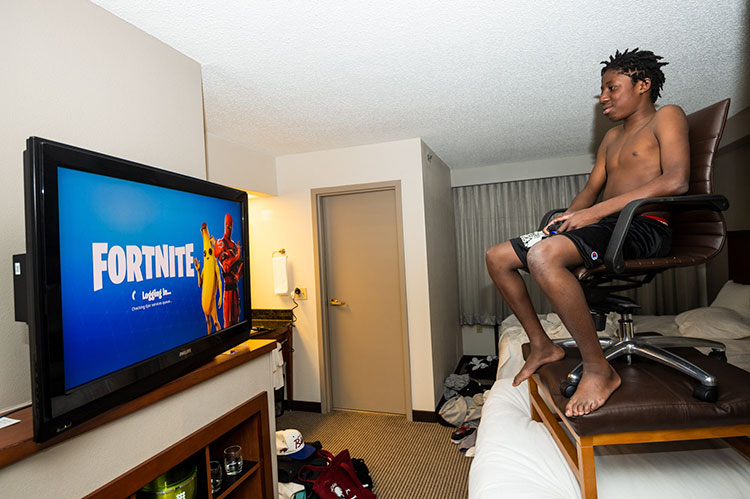 Won’t CBD cure whatever problem he has?
I don’t know, but whatever he’s taking sure fires him up. Next thing you know he’s bouncing off the walls, screaming and shouting and ripping the blankets off his roommate. 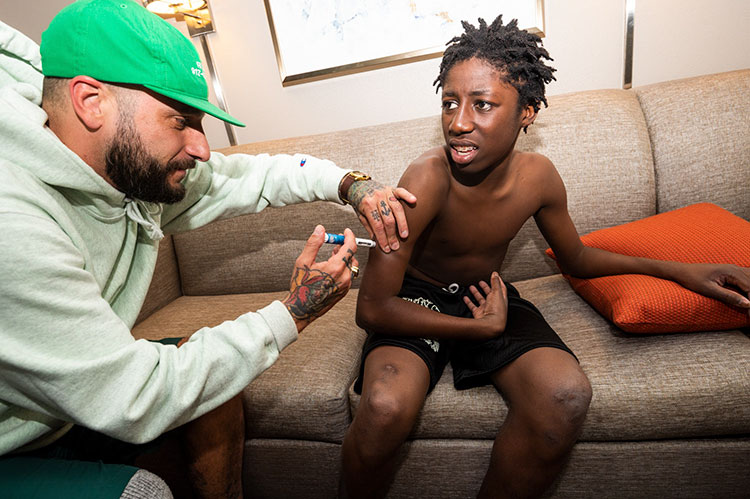 We repeat: Frank is NOT a doctor

What about his fame? When we were on 6th Street in Austin, every fifth person knew who he was, not even skaters.
Actually, no, he handles it pretty well for a 16 year old. He took photos with everyone who asked. He doesn’t mind doing it. Pretty impressive. He told me, “It’s only a picture. I can’t say no.” He’s got a pretty good head on his shoulders with that stuff. He’s actually a smart kid. 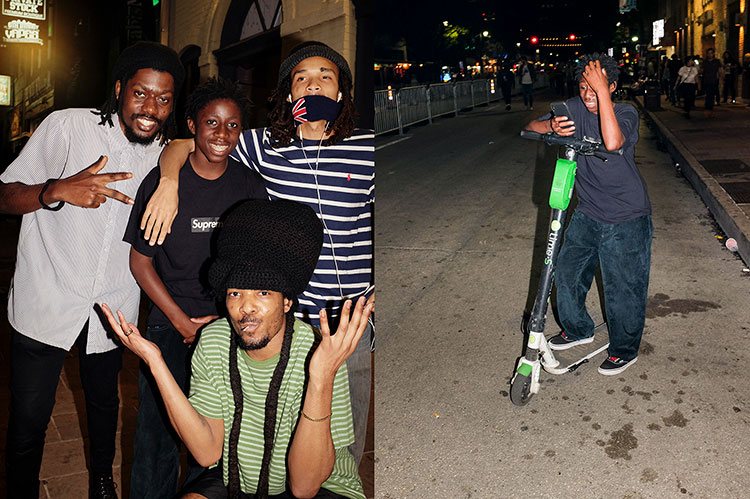 Kader with his many fans on Austin’ Sixth Street 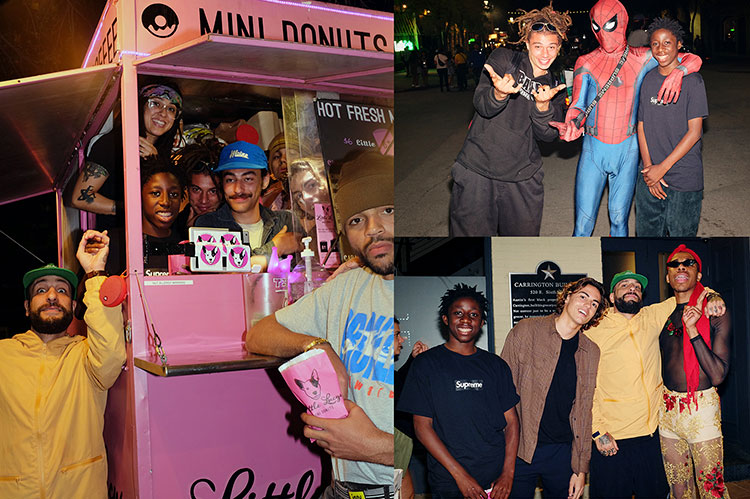 Even got free mini-donuts!

I also noticed on this trip you started bench pressing the talent. What’s this management technique?
To instill fear in them. They need to know that I will always be stronger than them.

Last summer we were in New York and you were on a big health kick—specialty beverages, coconut waters, CBD drinks. How was it to switch to giant bowls of cheese in Texas?
I hate my life right now! I disgust myself! I’m heating up a Japanese baked potato right now! 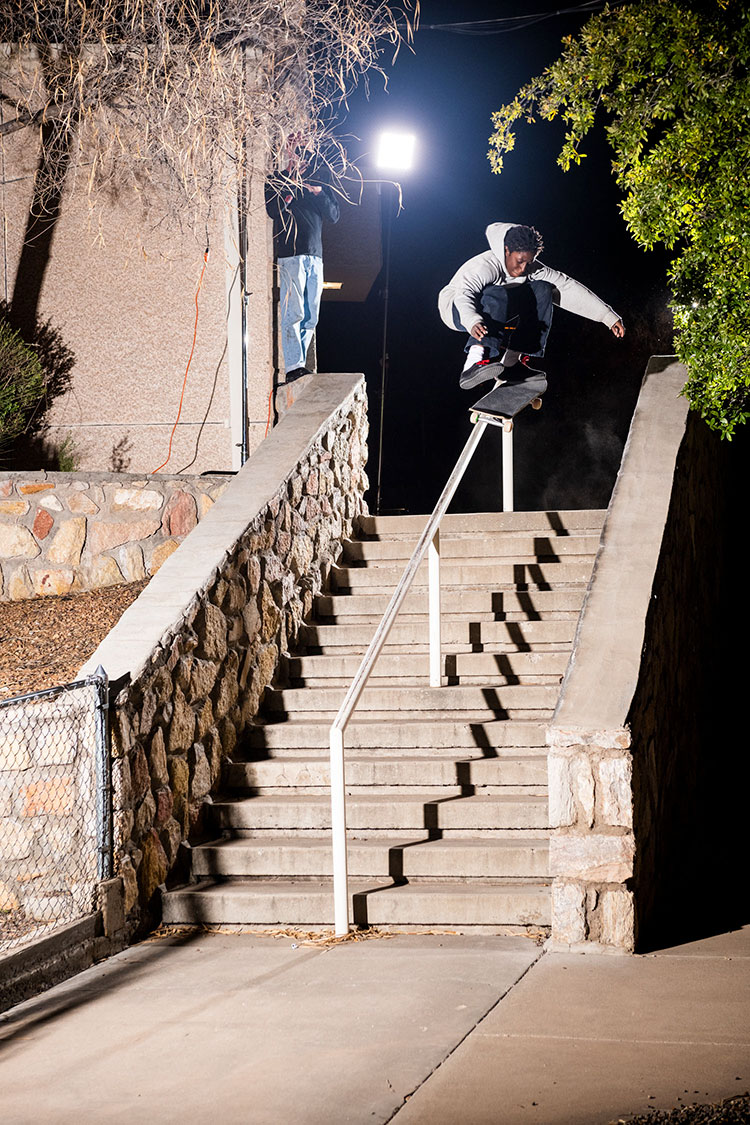 Did somebody say needles? Threading one on an El Paso kickflip.     Photo: Hammeke

They don’t eat potatoes in Japan!
No? Well that’s what the label says. Unless it’s a marketing scheme. I’m a sucker for labels.

Oh, I know. Speaking of labels, how many Supreme coats did you bring on the trip?
I don’t have a lot of Supreme coats. I prefer Burberry or Polo.

What is queso, for people who have never been to Texas?
Oh my God, it was a bucket of cheese! It might as well have been a trough of cheese. Melted cheese. And then the guy just kept bringing us more, like it was water. We must’ve eaten ten troughs of cheese before our meal came, and then nobody was hungry ’cause we ate all the cheese. 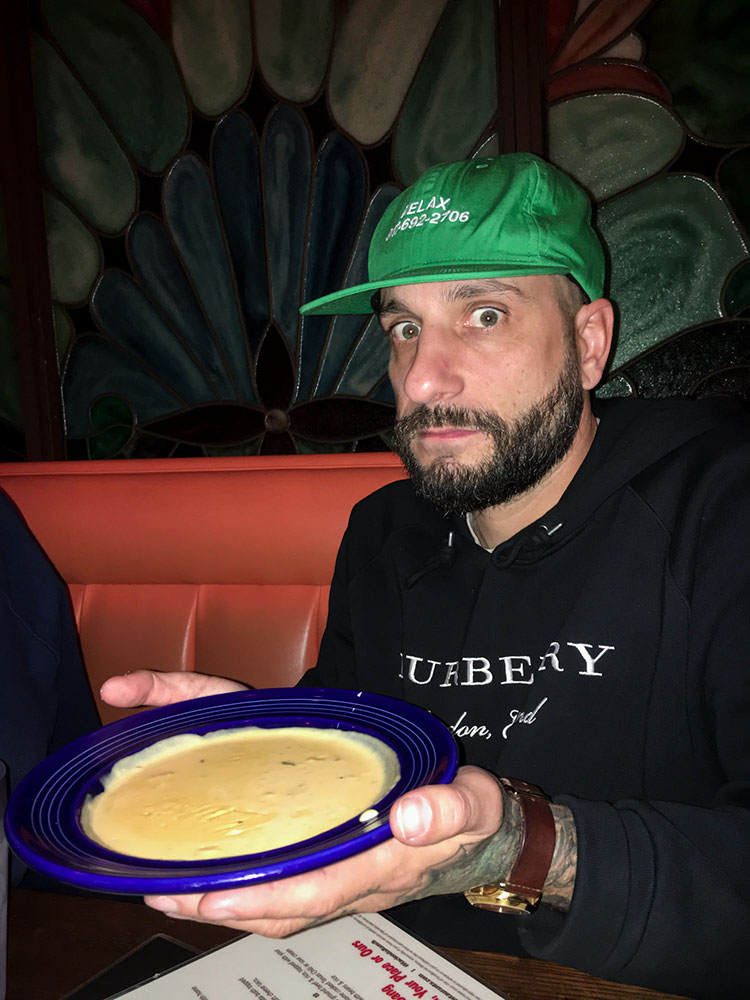 Frank, holding what Texans consume instead of water

Describe the moment on this trip when you got made out on.
You were there! I don’t know! I didn’t know what was happening at first. She had the look of the devil. This older lady, probably my age or older, is walking by holding hands with this gigantic Hispanic man and she was giving me a stare that was making me extremely uncomfortable. She was walking by and the man she was with pulled her closer and then she broke free and walked up to me in front of all of us, never broke eye contact, put both hands on my face. I yelled, “Yo, yo, yo!” and then she planted one on me and everyone cheered. It was kind of horrifying, actually. I didn’t know what was happening. And then she grabbed his hand and she walked away.

Well, I guess the Burberry’s working. Thanks, Frank. 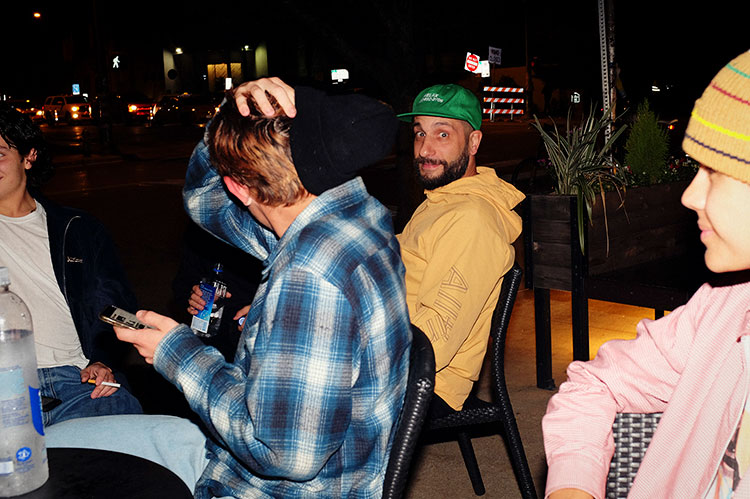 Right after he got made out on. You’re goddamn right the Burberry’s working
© 1981–2021 High Speed Productions, Inc.