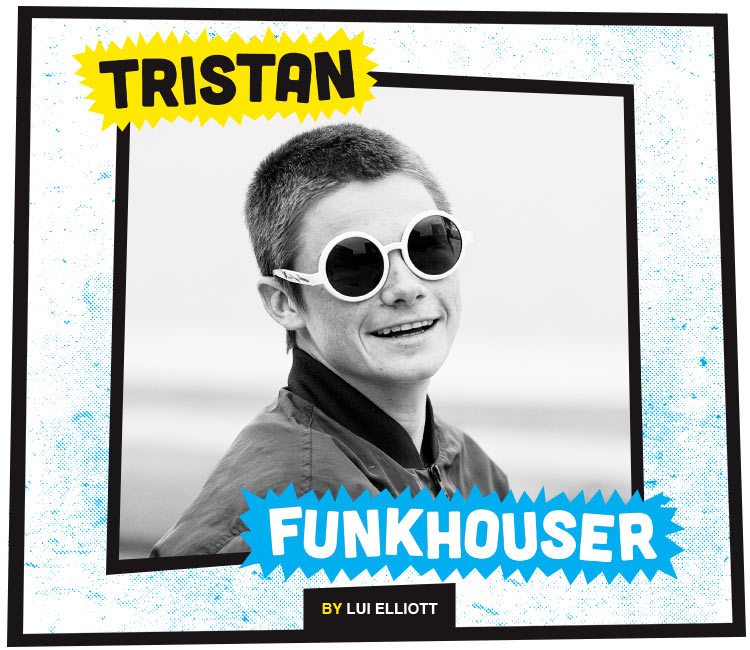 Tristan Funkhouser is a raging fireball. I’m not referring to his orange hair, but of his fiery and energetic demeanor. He has the stamina of a kid, but the attitude and style of a grown-ass man. His friends and peers hold him in high regard and despite his laid back personality he isn’t afraid to let you know how he feels. Don’t be surprised when you find out Tristan isn’t one to fake the funk. –Lui Elliott

Hey, Tristan, do you prefer Tristan or T-Funk?
I go by Tristan. It’s all good, though. Call me whatever floats your boat.

Who coined the nickname T-Funk?
Shit, I can’t remember. Probably one of my dad’s homies.

How old and tall are you?
I’m 19 and tall enough. Five foot seven inches now.

Like me, you’re pretty small. Does it bother you? Do you think you have a Napoleon complex?
I feel good man; short is chill. It don’t bother me.

Do you think you’re handicapped for specific tricks because of your height?
You got me fucked up, man. I just didn’t really start growing until I was 18. Everyone grows differently so maybe I’ll not be so handicapped in the future.

I didn’t grow until I was like 20 or 21, so if you’re taller than me already, you’re chillin’ and you got some more to go. Do you run a fake ID?
Sometimes. I’ve never bought one. Just used the homies’ old ID a couple of times.

How about when you travel? Do you have any problems getting into bars or clubs where the legal age is 18?
Nah, it’s super mellow. 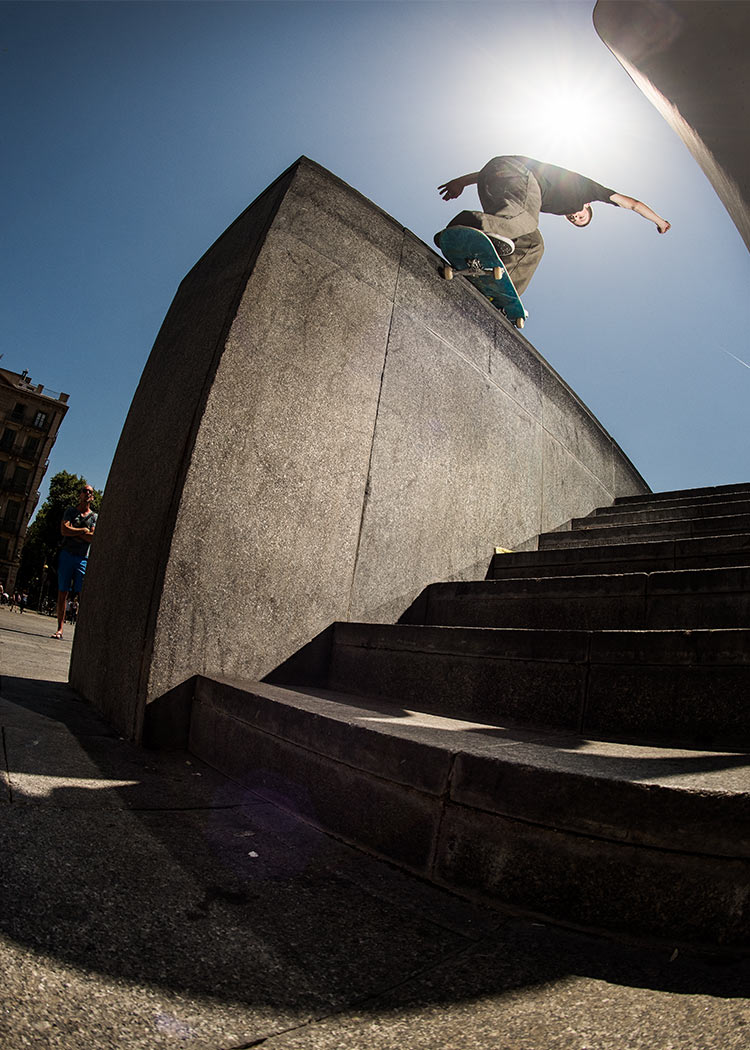 If his beats are as good as this Bennett grind, Tristan is destined to have the next radio hit     Photo: Blabac

What happened on your last birthday in Spain? I heard you lost your dinner at the club.
Lost my dinner! Shit happens; got a little too sauced up.

Oh, man, I feel you. One time I went to a swank club in Hollywood and painted the walls in the VIP section.
What paint were you using, player?

I used the food in my stomach as paint and my mouth as the paintbrush. Went Picasso in that bitch.
Ha!

It’s hot as fuck there, especially for California standards. What was it like growing up there?
It’s sick, man. Definitely grateful for growing up here. Los Angeles has one of the biggest skate scenes in the world! There’s so many spots and things to do. I’ve met so many dope people living here. I love it.

The Valley is huge and the transit system in LA sucks dog shit. How would you and your friends get around?
The O Line to the Red line.

Do you have your driver’s license?
I’m ‘bout to set up an appointment soon. I’ve been lagging, though. I’ve just been busy.

After you get that license, what car do you have your eyes on?
A Cadillac!

Of course you would! That car is G’d out as fuck. Changing gears, how did you initially pick up the wooden toy?
I was at a t-ball game and I saw some kids skating. I ended up getting one myself and never stopped.

Do you remember your first complete?
It was this Gotcha board that came with some big-ass headphones from the department store Kohl’s.

Damn, I’ve heard the Walmart and Target stories but never Kohl’s. I wasn’t even aware they carried skateboards.
Yeah, shit was budget! 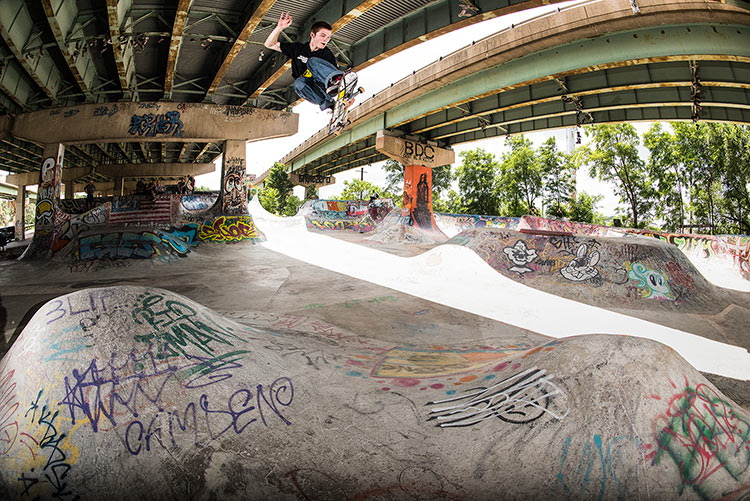 Who are your favorite skaters? Who do you draw inspiration from?
Cardiel, Quim Cardona, Gonz, Mike Carroll, Grant, Ishod, Reynolds, Dylan—there’s a lot!

Who’s number one on that list?
Cardiel in In Bloom. Off top. He pretty much doesn’t take his foot off the gas! He’s a G.

Did you go to and graduate from a regular high school? What’s your take on the education system?
I went to a regular high school, then a program called Opportunities for Learning for a bit. Shit was wack, but I think you should do what you want. I stopped going because school will always be available, but an opportunity in skateboarding doesn’t last forever. I just want to be able to focus on one thing for now.

Are your parents around? We’re they supportive of this decision?
Yeah, my parents are the best! They’ve always been so supportive.

Your persona gives off a pretty fuck-it attitude. The spunk kind of reminds me of the whole Baker 3 hijinx vibe. It’s really different for a sensitive time in skateboarding and it’s actually quite refreshing. It’s very reminiscent of an early Bryan Herman, but you add your own style to it. How did you first get on Baker?
I met Reynolds at NoHo plaza and he hooked it up with some boards.

Did he come up and approach you with boards the first time he saw you or had he seen you beforehand and wanted to hook you up?
I just skated with him at the plaza for a bit then he asked me if I wanted some boards. He gave Beagle a few boards for me and I randomly skated past Beagle in North Hollywood and got them from him.

What’s it like having him as a boss and going on trips with him? What’s your favorite trip you’ve gone on with him so far?
Best dude out; that’s why he’s the Boss! The Baker summer tour with Deathwish was so sick! Especially ’cause the whole team was on the trip. That’s super rare, man. 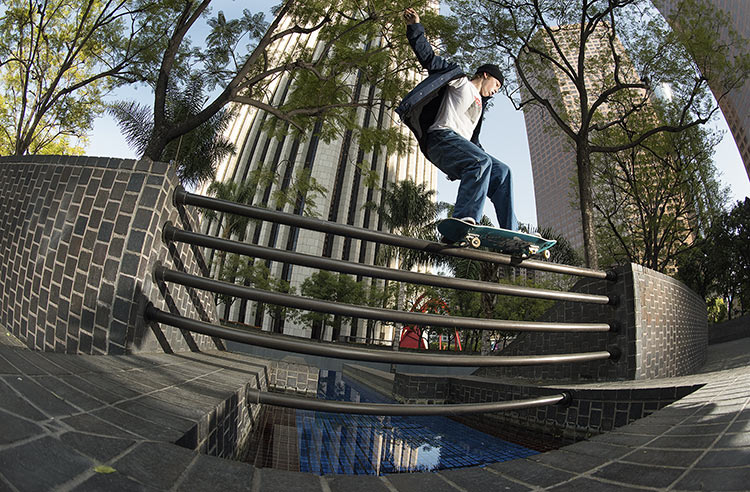 That must have been insane to have the whole team out and the demos had to have been fucking heavy. Anything crazy or sketchy happen cause y’all were so deep?
Nah, man, nothing sketchy, all smooth sailing and hijinx! It was an insane trip; that’s all I’m going to say.

It seems like the whole Baker team is a real close-knit family, more than a company. Who’s your favorite new guy on the team?
Kader, for sure. He’s a little G! Nobody his age can fuck with him. He is a lil’ grown man. I love that dude.

How about getting on DC? How did that happen? Did you have to do the Mega Ramp in front of Colin McKay and Danny Way to get on the team?
Nah, fool, Baker hooked it up. It’s been super dope skating with everyone from DC. I love them.

When you go on those trips, who’s your road dog?
It’s a pack of Hydes, man. We usually have Bernie, Hyde, Kip, Randy, Zilla, Iquiduzit, Chris Raisentown and uncle Blabac on the scene. They are the ultimate road dogs!

Dude, those fucking nicknames are amazing. What is your alias and how did you get yours?
My name is Herbert and Randy hooked it up.

What’s the story with the Croat Bus?
Spliff is croat and the van is the bus.

When you’re on the croat bus and you get the auxiliary cable, do you play your own beats on the stereo?
It ain’t like that; I just mess around. I know my beats suck.

Someone told me they’re pretty good. They also told me not to tell you that. How did you get into making beats?
I got hurt and couldn’t skate for a year, so pretty much I had to keep myself occupied.

That’s a pretty good way to not lose your mind. How do you make the beats? Do you show anyone?
Yeah, I mean I started by getting this app to make beats so the homies and I could freestyle. The goons see them!

The music choices in your video parts are older, more classic jams that range from Earth, Wind & Fire to Del tha Funkee Homosapien. Do you or the editor pick out these songs?
It’s usually a collab choice, feel me? I definitely chose most of them, though.

What do you listen to on a daily basis?
New Order, Funkadelic, Khruangbin, Roxy Music, DJ Ciderman, William Onyeabor—

That’s some good tastes. Did you listen to a lot of that stuff growing up?
Yeah, man, always have, always will. 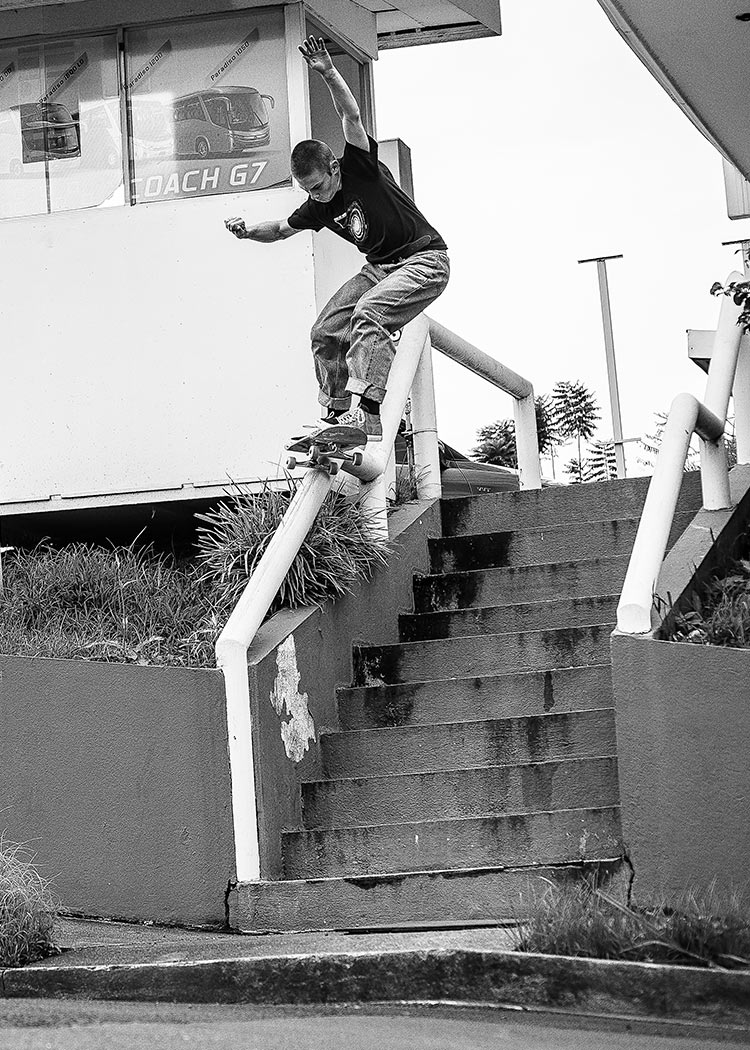 Classic tunes and classic moves. Gap out to 5-0 for the homies in the Croat Bus. Right on, Herbert     Photo: Torres

Is it true you have your own strain of weed?
Dude, the lil’ homies’ mom had this collective make me my own strain for a little bit. That shit was dope! They would give me an ounce a month, which I smoke in a week, but it’s lit! After a while, the owner wanted me to post Instagram photos of weed four times a month. I posted it a couple times because the weed hook up is awesome, but I want to keep my shit about skating. I just thought it looked wack on me, so I’m just buying it now. It was fun while it lasted .

Damn, they really came through. Do you usually smoke joints, blunts or chops?
Spliff: 70/30.

Why do you roll these spicy-ass spliffs that have no weed?
That’s what I smoke!

What’s the most burnt move you’ve pulled whilst ingesting the devil’s lettuce?
It never ends.

Speaking of burnt, you apparently got into an altercation with a scooter kid at your local park, Pedlow.
Where do you get this info? This kid that scoots and went to my high school tried to talk shit, so he got the one-two.

I heard you can have a really gnarly temper sometimes, even to the point where it could be frightening. Why do you get like that and what does it stem from?
I don’t know. I’ve always had a shit temper. I try to be chill but I’m a spaz.

How do you cool down after going through it?
Fuck outta here! Ha! Bip a brew and we coo!

Tell me about the Piss on the Toilet Seat video you were working on.
Fuck, dude, we had 15 minutes of footy and I kid you not; my screen cracked all crazy and it got gnarly water damage. My phone wasn’t backed up so it’s gone. We’re all bumming. It’s such bullshit.

Was it legit street shit or skatepark footage?
It was mostly street footy and hijinx. I’m so bummed.

Maybe it’ll be back randomly. Shit works out like that sometimes. As for upcoming projects, what are you currently working on?
Right now I’m filming for this DC promo video that comes out in September and Baker 4. As for a release of the Baker video, we working on it, ‘ight?

What do you love?
The spice of life, brotha.

Anyone you wanna thank?
I’d like to thank my mom and pops, everyone at Baker, DC, Deluxe, ValSurf and all the Pedlow goons!

Massive ollie into the bank—can’t buy that at Kohl’s     Sequence: Blabac