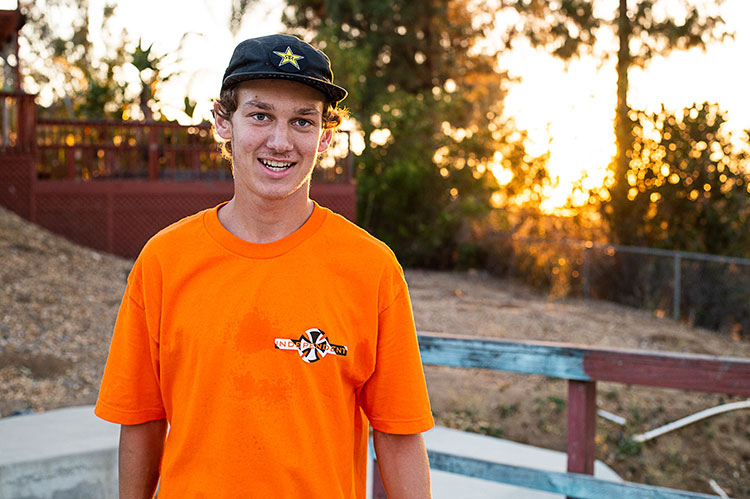 Born and bred skating pools, pipes and parks with the older dudes since the age of five, Tristan Rennie is now 20 and keeping the Badlands tradition alive and well. Bleed on, young wizard! –Rhino

No way, as we speak? What are you getting?
I’m getting a traditional eagle with a rose from my girlfriend’s brother.

Cool, maybe the interview will take your mind off the needle. Where are you from and how old are you?
I’m 20 years old and I’m from Rialto, CA. 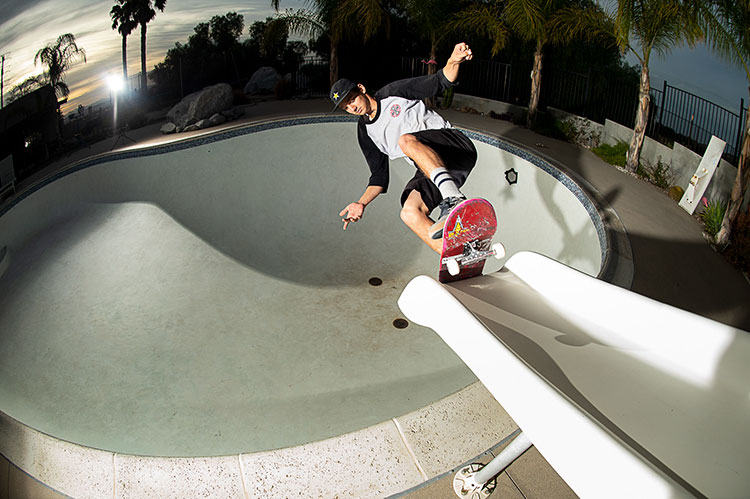 NBD? Boardslide to fakie across the slide     Photo: Rhino

How do you describe the Badlands to someone who doesn’t know about it?
Super dry, hot and lots of empty backyard pools. And the infamous Mt Badly pipe is there, too.

When did you first start skating?
I remember when I first got into it I would go to the old Fontana skatepark and Chico park. I was maybe around five.

Who was the first pro skater you saw in person?
That would have to be Steve Alba. But after that it was Josh Borden. He had just gone pro at the time but was always killing it.

Your dad used to skate the old Pipeline park in Upland. Is that how you first got introduced to skateboarding?
Yeah, my dad started skating when he was 16 and met Salba at Pipeline. They’ve been skating together for 30-plus years and still skate together today. That’s how I got into skateboarding, from my dad.

So you would hit the skateparks with your dad?
Yeah, with him and some of his friends. We would skate Fontana South, Chico and Upland.

Kickflip back Smith behind a remodel in the Rialto Hills     Sequence: Hammeke

So your crew back then was the older dudes?
Yeah, mostly.

Did you get to trespass with them or did you only hit the permission pools?
I could skate the pools if they weren’t super sketchy, but my dad and Salba didn’t encourage trespassing when I was that young.

Was your dad ever sponsored back in the day?
He used to get boards from Losi skates.

What was your first real skateboard?
It was skateboard made by Kelly Belmar. It didn’t have any graphics but I just put a bunch of stickers on it like you do when you’re a little kid.

Growing up, what videos did you watch?
Whatever videos my dad had, like old Santa Cruz videos and the Fruit of the Vine pool documentary.

Do you remember your first time to Mt Baldy pipe?
Yeah, I was really young, like seven or eight years old. My dad knew one of the workers from the dam. We could drive up there, park and he would get us in through the back end of the pipe.

Was Salba there?
No, he he wasn’t. He would always ask my dad for the dude’s number who worked there but he would never give it to him. 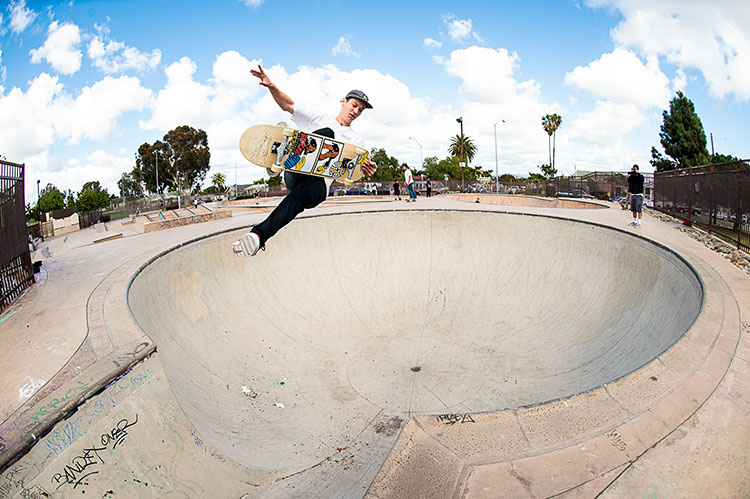 Tristan takes the madonna over the channel to disaster at Memorial Skatepark     Photo: Rhino

Do you remember your first time going there with Salba?
The first time with Salba was the year Daewon won SOTY in 2007. My dad set it up so we could all park in the back and skate it. Burnett was there, but I was so young I didn’t really know anything, but Daewon was doing the biggest kickflip to fakies in the pipe.

Did you see the magazine when it came out or was it years later?
I saw it when it came out. I think my dad got a shout out in it for setting the whole thing up with the easy way in.

That’s rad to have a legendary spot like that in your backyard. You ever see Salba make someone jump the gap?
Yeah, and so many stories about Salba kicking the walk bridge over so you have to jump. I think the first time I jumped the gap I was 16. It’s not that bad going in but jumping it on the way back is a little more sketchy.

Whats the craziest situation you’ve ever been in with Salba?
In general, just his approach on how militant he is. If he hears a noise he’ll jump into a bush or something, with his red helmet on and all his pads. He’ll run from the cops, too. It’s kind of crazy to see a 50-plus year old running from cops with full pads on, looking like tweaker or something. 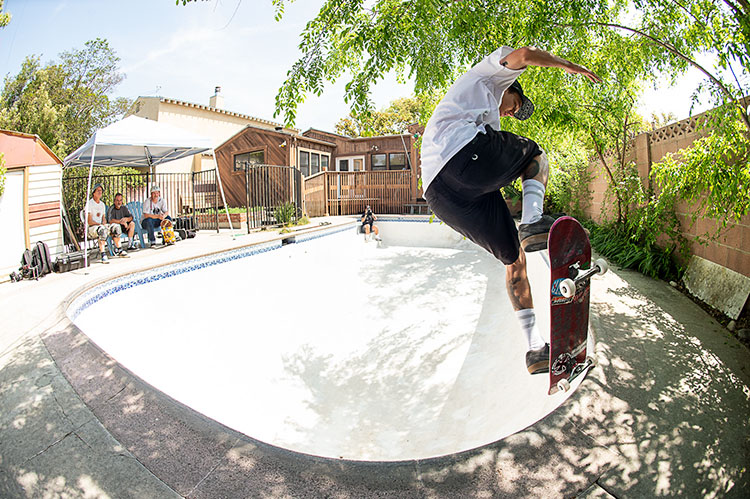 The LA Valley is hiding some serious backyard treasures. Tristan nosegrinds through the corner of a beaut     Photo: Rhino

If you had to guess, how many pools do you think you’ve skated in your life?
I have no idea, but if I had to guess maybe 100 pools? There are about ten new pools popping up a year, and I have been skating pools for about ten years, so 100 would be my guess.

What about Salba?
He is claiming thousands, which kind of makes sense. He’s been putting in work for over 40 years in backyard pools.

Do you ever get down in the streets or are you just keeping the Badlands tradition going with pools, pipes and parks?
I’ve skated one handrail and it was scary. I can skate stairs better, but at this point street skating is so insane that I just like skating transition more.

You seem like you come from a good family. Did you finish high school?
Yeah, I graduated from high school. I was never home schooled at all. It sucked; I was at school doing nothing and watching all of my friends on Instagram traveling the world skating.

Did you get good grades?
They were decent. I didn’t put in a lot of work; I just wanted to graduate.

That’s rad. Do you ever think about the future? What you are going to do after skateboarding?
Yeah, skateboarding careers are getting shorter and shorter unless you’re a legend like Lance Mountain or Andrew Reynolds. Maybe I’ll get a job in the skateboard industry down the road.

Maybe you should ask Salba for some insight on maintaining a pro career. He’s been running it for 40-plus years.
I know. He definitely hustles, though. He sells his artwork and used boards. 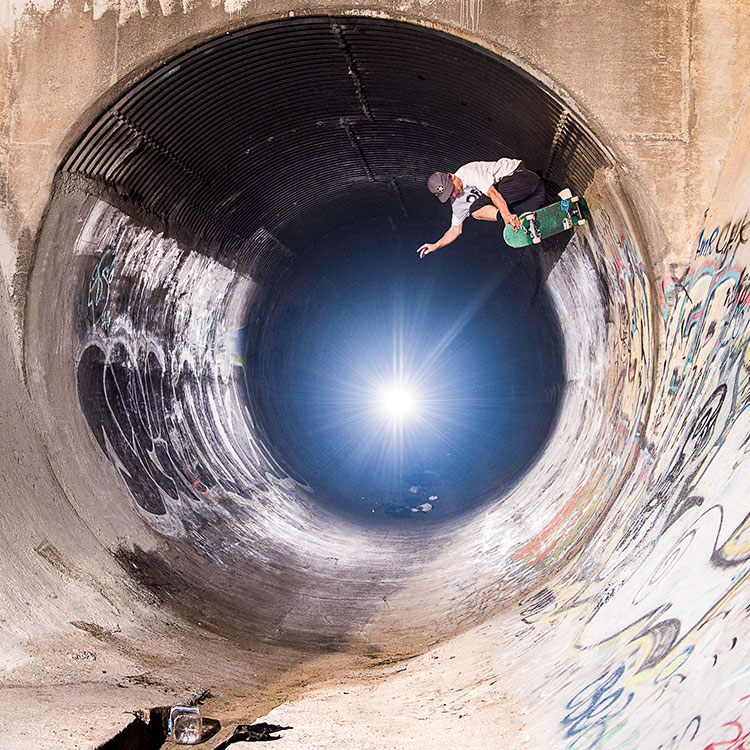 Tristan know that skating pipes is one way to stay cool in the IE—tail scraper just below the corrugate     Photo: Hammeke

What happened wth Santa Cruz? Didn’t you ride for them for a long time?
Tom Knox got me hooked up with them when I was ten years old. Seems like they are starting a whole new team. They weren’t doing anything for me that I wanted to do and it just seemed like it wasn’t headed in the right direction for me.

So you have a new board sponsor?
Yeah, I just got on Blood Wizard.

How did that come about?
After getting let go from Santa Cruz, I didn’t have anything solid going on and I was getting boards from a few companies. Chris Gregson hit me up and wanted me to get on Blood Wizard. I went and skated with him the next day and it just seemed like the right fit.

Who’s your favorite dude on Blood Wizard?
Jerry Gurney is the funniest dude. Gregson is really rad. Nolan Miskell is really gnarly, too. The whole team is just rad.

You think you can hang with those dudes, specifically Jerry on a ten-day trip?
I think so. We are actually going on a trip in a few weeks so we will see.

I’m sure Jerry will have it out for you and try to break you in since it’s your first trip with them.
Oh yeah, he will. I’m ready for it; it’s going to a fun one. I’m hyped. Skating with those guys is more like family.

I know you get to travel a lot for contests. What are some of your favorite places you’ve been?
Copenhagen, Sweden and Brazil are rad places to travel to. 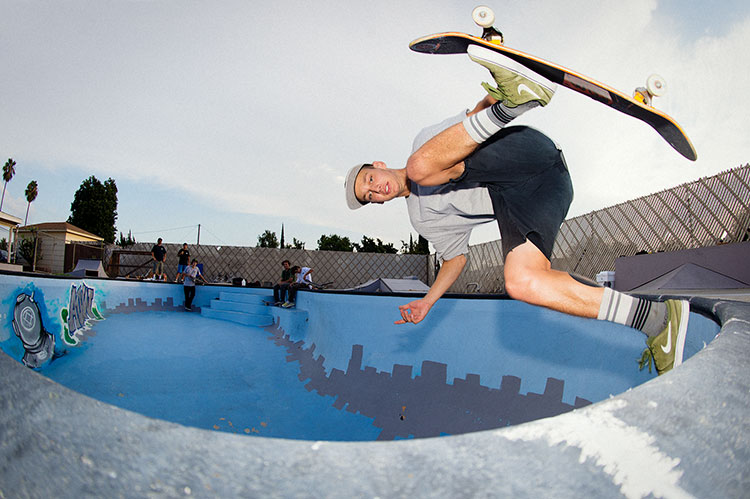 Do you like going to all of the contests, like the Vans Park Series?
Yeah, it’s sick. I get to skate them with a bunch of homies. Then you get to go on little side missions to take advantage of the other spots in those countries. You never know when you are going to be back so you have to try and skate as much as possible.

Where are some places you want to travel to and check them off your list?
South Africa and more around South America. There are so many skate spots down there.

Who are some of your favorites skaters killing it right now?
Cody Lockwood, Clay Kreiner, CJ Collins new part was mind blowing and the same with Winkowski’s Indy part. Ishod and Zion are both rad because they can skate street and tranny really well.

How long did you spend filming your Indy part?
I filmed it pretty quick, like three or four months. I tried to go skate every day. I’m pretty hyped on how it came out.

What do you do when you’re not skating?
I like to surf when I can, but usually I just skate a lot.

You still living out in the Badlands?
Yeah, living at the parents’ house right now, hoping to move to the Oceanside/Vista area. It’s got cooler weather, the ocean and lots of skating going on.

Do you think there is a board with your name on it in your future?
We will see—maybe one day. That is definitely a goal to have. 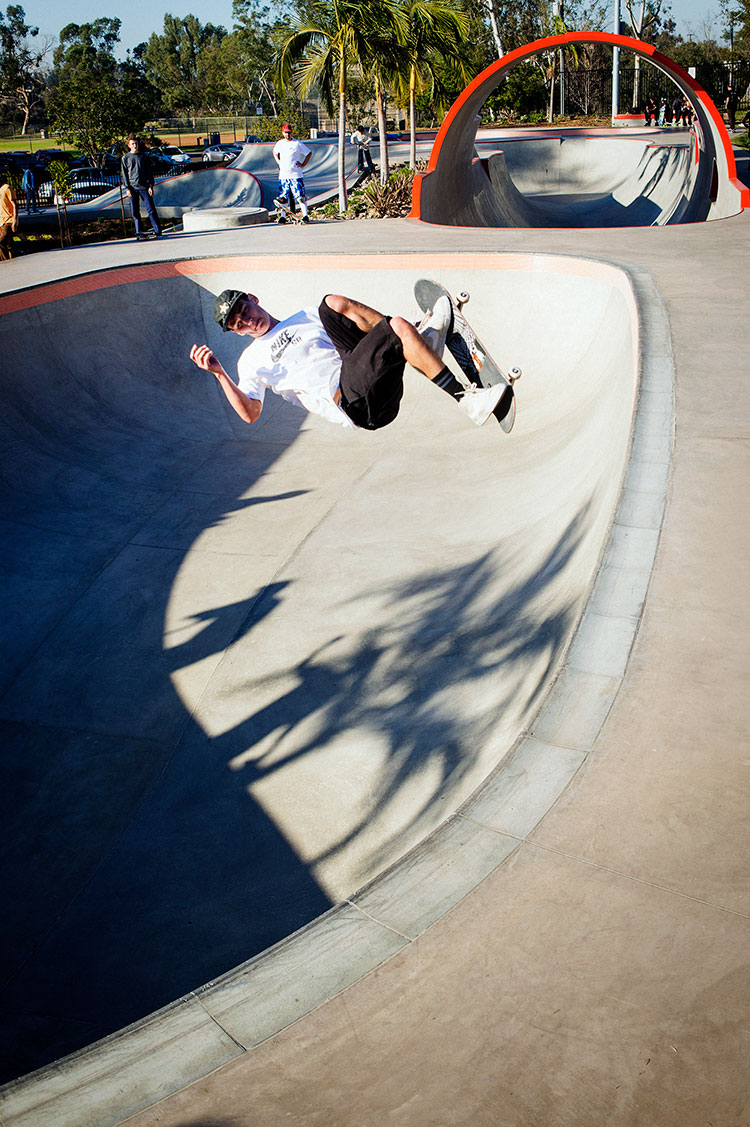 No contest judges in sight, Tristan spins a 540 just for the stoke at Linda Vista   Photo: Burnett

What are you working on next?
I’ve continued to film since I finished this part, so I’m going to keep filming and I’m going to a bunch of contests this summer. And just keep skating!