You can learn a lot about somebody by being stuck in a van with them for a few weeks. I first met Tyler Surrey on a road trip and quickly realized how talented he is on the board. But as we all know, that's not always enough. Tyler is also really easy going, patient and able to hang with the big dogs—no matter what the situation entails. He's also super productive, regularly clocking the majority of footage on filming missions. His and Wes Kremer's Pack of Hydes part is dropping on the Thrasher site today, so this seemed like a good time to catch up with Mr. Surrey. He's one of the hemmys, for sure. —Schmitty

Where did you grow up, Tyler?
San Diego. Mostly in University City and Clairemont.

What was your first legit skateboard?
The first one I can remember was a Plan B pat Duffy board with some Indys and blank wheels.

First legit sponsor?
This local skate shop called Sun Diego. Before that was my mom.

How did you get on Mafia?
Pretty much just skating with Dan and Smolik back in the day. That was the crew. Then it just somehow materialized into a board company.

Whats a typical day in the life of Surrey?
Wake up, coffee and/or smoothie, meet up with the mates and cruise around somewhere. Pretty simple and ordinary stuff. Lately we've been skating everyday and into the night because the days are so short. Downtown San Diego at night is so fun. Skate the Concourse. 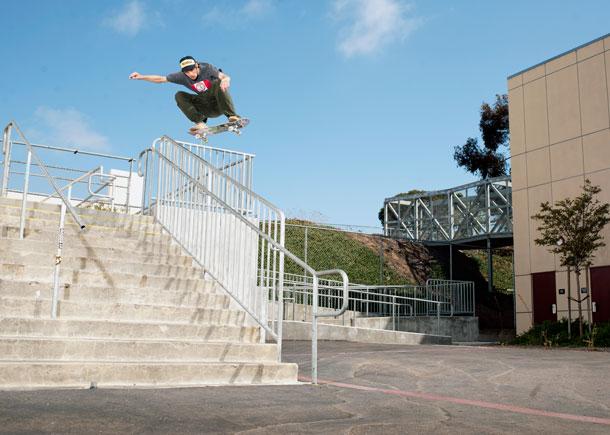 Five reasons to live in SD?
The weather, the mates, Standley, the beach and It's comfortable and familiar. That's a good and bad thing, though.

If you were going to move to some place other than San Diego, where would you go?
Madrid, España, because it's my home away from home. It's very mellow and a lot of my Spanish friends live there.

Who are the main hemmys you skate with?
All the mafia hemmys and Marius, my homie Kai when he's not working and with Russell and the New Balance dudes when they can convince me to drive up to LA.

For the uninformed, break down the following terms: a hemmy, the Gov., a G and a legend.
A hemmy is a homie. The Gov. is Marius, the governor. But a Gov. is also someone who is just handling a sticky situation with ease—just governing the situation.  A G could be a few things, but let's just say a gangster, a homie, or a gram. And a legend would be Cardiel. 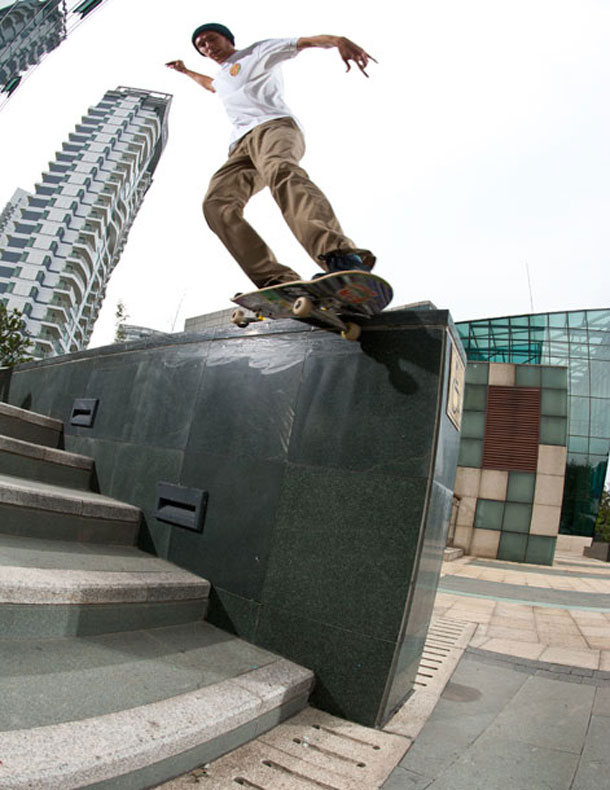 Give us a good story about the Gov.
I remember one night in Helsinki, years ago, we were all sitting on top of this, like, 14-foot wall getting faded with all the Perus homies. After a couple hours, we realized that the wall we were sitting on was actually kind of a bank that you could maybe drop in on. Without hesitation, the Gov. gets up, grabs a random board and tries to drop in on this steep beast of a wall. He hits the flat and just pitches into the ground. He climbs back up and tries it again—and again and again with random homies' boards. I don't think he ever pulled it, but the next morning I took a photo of his bloody ass shirt and swollen bloody hands and knuckles. True governor status.

When jumping into a van for a two-week skate trip, what are the essentials to bring with you?
Well, depending on the trip, camping stuff, music (iPod or instruments), camera, some earth, water and fire.

Who are the top five guys you want in the van on this imaginary trip?
Any and all of the Mafia homies, Marius, Cranny, Russell and Ron Allen.

Random question: why do you despise Subway?
I worked there when I was 15 or 16. I ended up getting a stomach flu one day after work, and I ate there almost every day, so I associated Subway with that feeling of being ill and vomiting violently. Ten years Subway free! 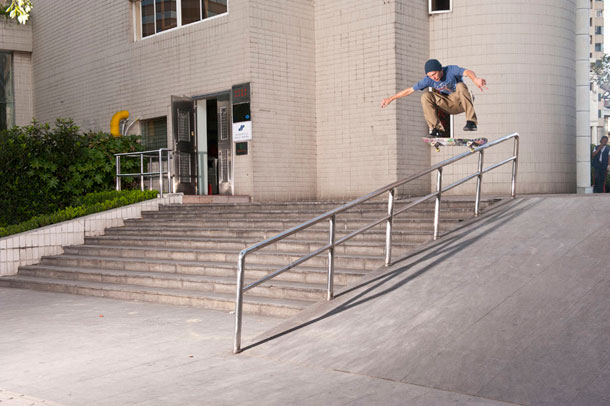 What's your sketchiest experience with the police while skating?
Luckily, not too many sketchy stories. I guess skating this big four at Clairemont High School. I was battling a trick and saw the cops walking up. I locked eyes with the officer while rolling up to the stairs and proceeded to give it one last try. I bailed and my board landed at his feet and he kicked it. He was so furious that I didn't stop skating upon eye contact. They then proceeded to take photos of all the damage at the school and pinned it on me and Smolik. We got off in court with a ticket and a one-year restraining order from the school. Also, If you're going to Arizona on a skate trip, don't take the 8 east. Avoid those border stops.

Where did the nickname "Tooksie" come from?
This bullshit story that got all blown up thanks to Rodney Johnson. We were on a Billabong trip and I was looking for some hash. Moments before getting in the van to drive to the next city on the trip, I met a guy selling some. I'm not completely stupid. I checked it out and made sure it was decent. In between being in a rush to leave, having this French guy translating for me when I didn't need him to, and being sketched out on the situation, he pulled the ole switcheroo in the pocket. He handed me the decoy Tootsie Roll and we left instantly. Before I knew it, I was in the van holding a 40-Euro piece of candy and getting called "Tooksie" by Rodney and Marius for the next six hours of the drive.

Top 5 influential skaters and why?
Penny. Watching him skate just helps you make sense of life. He had it more than figured out. Wes Kremer for the same reason. Cardiel for his overall outlook and just the hype he can give you from watching his skating. Just hearing the name gets you hyped. Like Phelps said, "You know who's back there? Cardiel is back there. You know what that means? That means get some." Gonz for the style and flow and level of shit he was doing, and still does, for street skating. There's too many to name. I would say Jake Johnson. Ever since his Chapman video part I've been a fan of everything he does. He's a very smart, opinionated person, too. I like reading what he has to say.

What do we need to know about this Pack of Hydes part you and Wes are droppin' on the Thrasher site?
All the footage was pretty much just accumulated as a byproduct of skating and there happened to be a camera nearby to film with. I found out about this video, like, three weeks ago, so the last couple weeks were the only time I went out filming with a specific video project in mind.

How did 'Hyde' originate?
Hahaha. I actually don't really know. Wes started calling everyone that on DC trips and it just stuck.

What's your favorite Wes Kremer story—off a skateboard?
Probably him telling me how he skated home on the freeway one night back in the day. That involves a skateboard, though.

Who do you think should be SOTY this year?
I can't answer that without being biased, but I would say Wes. I know it comes down how much coverage a person's had and all these factors, but he's someone that always puts out quality over quantity, and there's been a heavy supply of gnar-ness from Krems this year. In our little world, he's SOTY every year to me. He's blown my mind more times than i can count.

Future projects?
Just try to travel, stay moving and healthy—not be too tied down to any person or place. That's the plan.