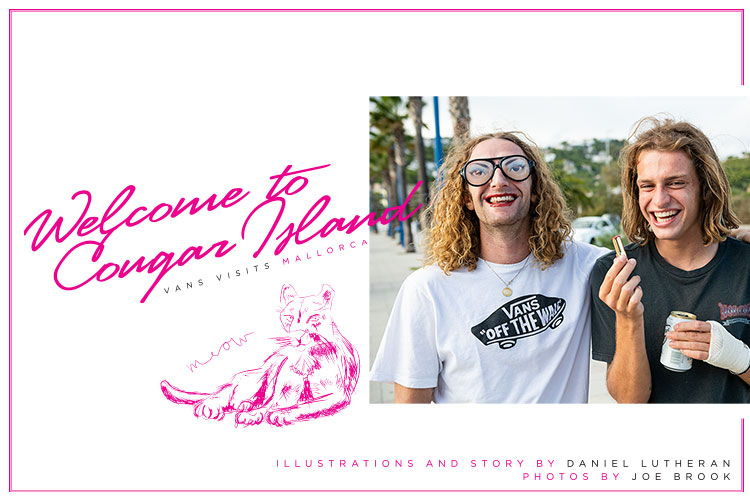 The maiden voyage—I came onto this trip fresh off an ankle clean out and I was super giddy to get back on board and do some traveling. And what better way to re-acclimate than a mission to Spain? There’s no better way. The crew was all good people—Vans Euro meets Vans Oz meets Vans USA. Mallorca got hit with a horrific magnitude of rain and flooding the week before we arrived. Serious shit! No reason to fret, though, the island’s dialed where you can chase sun and avoid storms accordingly. The Spanish jungle is laced with terrain that appeals to any sense of one’s ’boarding. Any sense in general, actually, if you include the cats. Cougar island. What a place to be.
  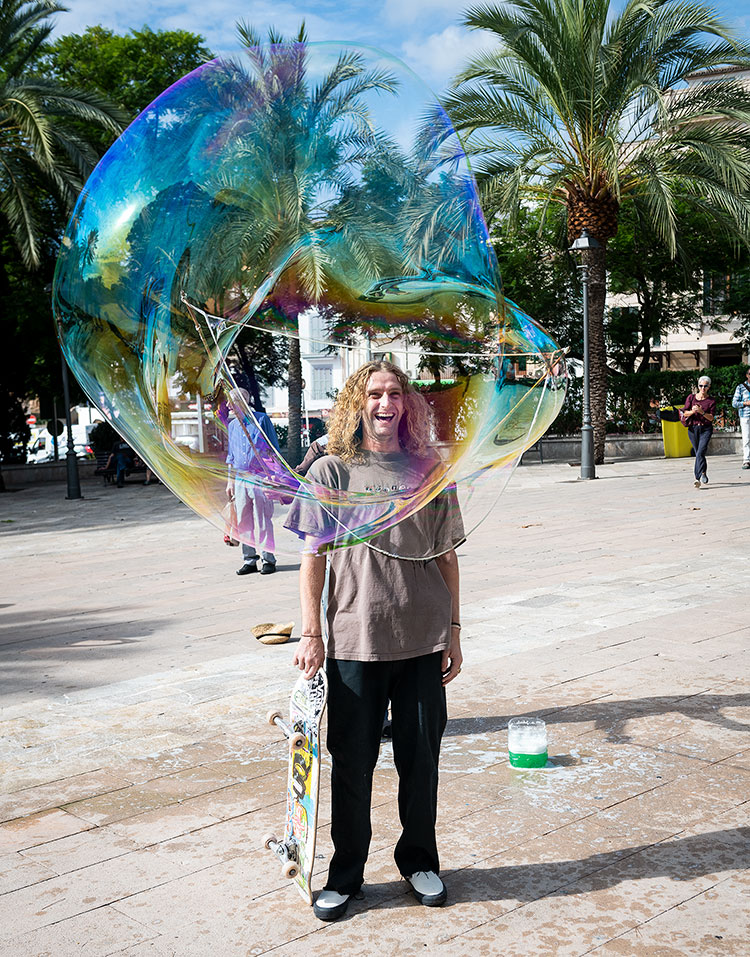 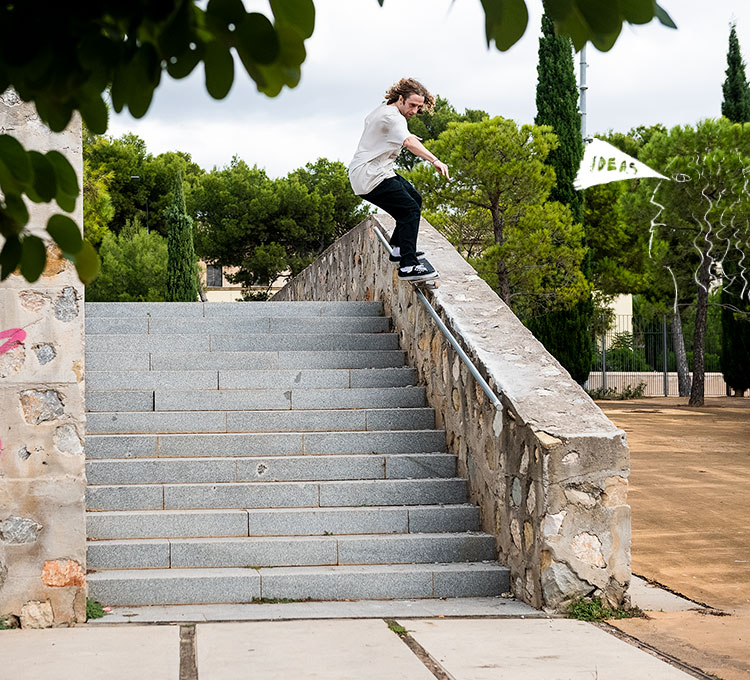 This is my first post-ankle-surgery trick and photo. So stoked to be back on the horse! Rough-rider frontside 50-50 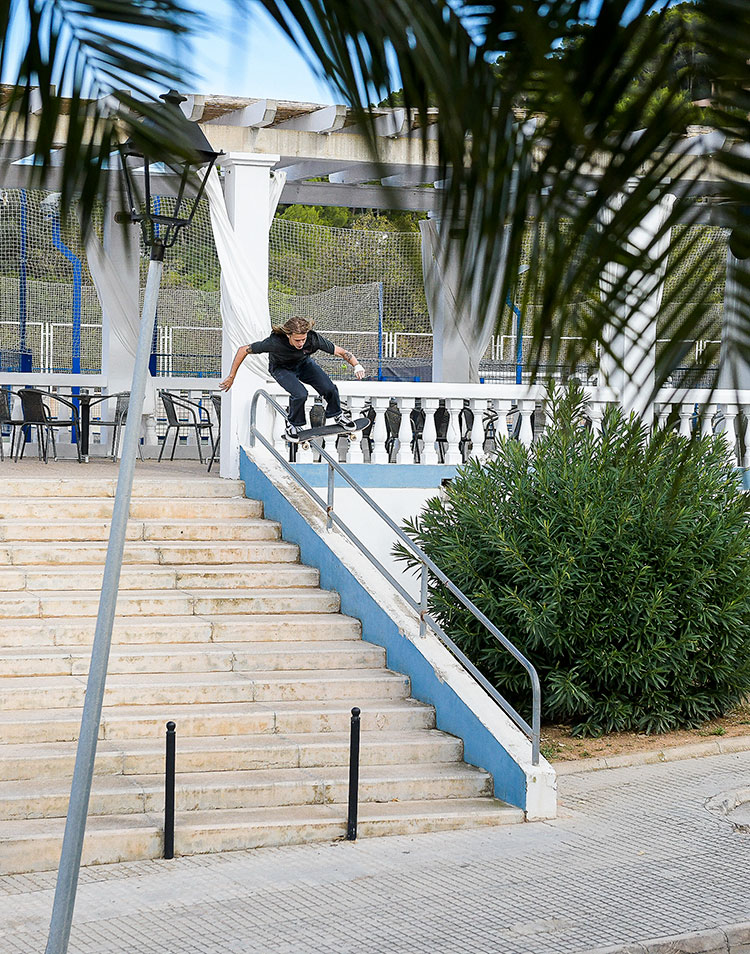 No run up? No problem! The owner cleared the patio so Axel could bust this bronto boardslide. Free drinks on the house! 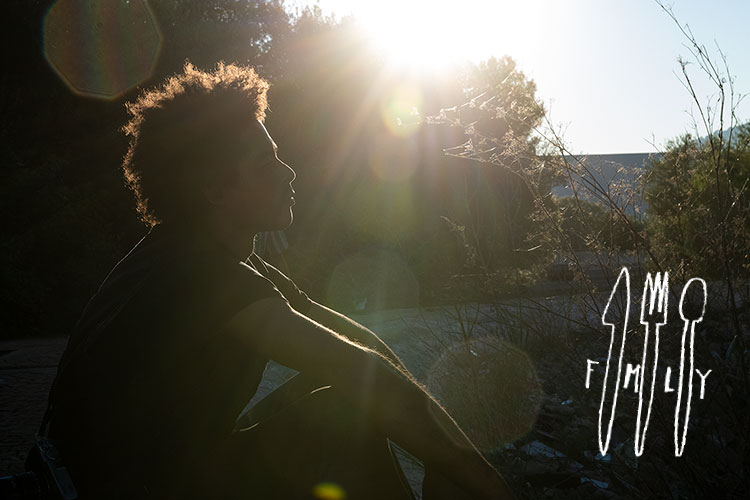 Self discipline is a beautiful thing and Pfanner knows this shit. He knows the path. Chris runs a tight ship that has successfully sailed upon endless endeavors. Anytime I get offered a spot traveling with him I jump at the opportunity. (The first time I left the country was to meet him in the Canary Islands.) Taking up the business end of TM for Vans Europe, he now rips and handles the paperwork on the back end. It’s easy to see his dedication to the life—a blend of neck-high hops balanced with family, friends and his new endeavor. He takes good care of us boys and those in his inner circle. After each adventure I bring home new wisdom that—whether or not he intended to share it—I have learned from his operating system.

For example:
• You only get one body so take care of it—stretch daily; nurture oneself.
• As hard as you work, celebrate equally. These times we have are about experiencing new places and one another as much as fulfilling our athletic roles.
• Keep your end of the bargain. Your word carries weight until it doesn’t. As easily as you are included, you can be un-included.
• Discipline does not mean skip out on good times. Business and pleasure blend.
• Plan well + eat well = productivity. Preparation and opportunity are directly linked.
• You only get one shot at this lifestyle; be passionate and work hard. It’s a fortunate experience and someone’s always in the folds waiting for their shot.
• Don’t sweat the small stuff, and remember, it’s all small stuff. 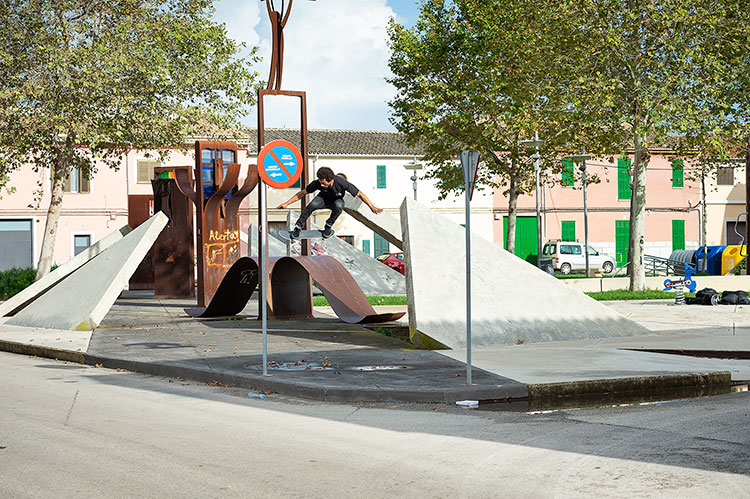 Paying tabs and blasting in the streets, the Pfan Man handles both ends of the biz—ollie past the curb 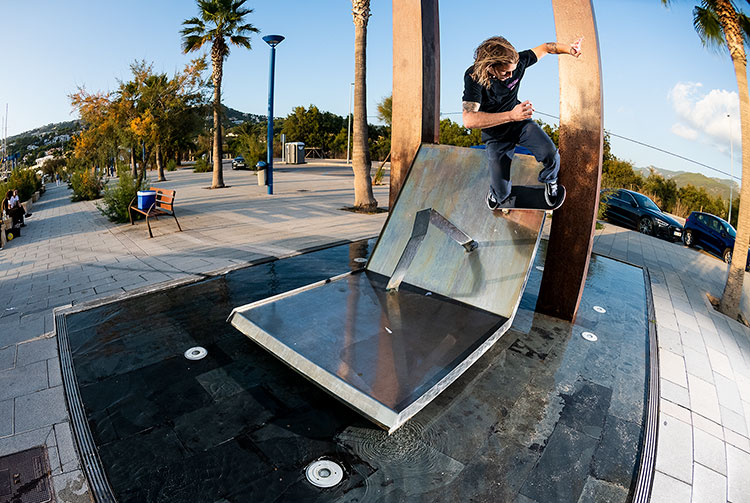 Axel avoids the water hazard—ollie to sculpture ride. This thing was sketchy gnarly!

 
Things you as a reader might really want to know: Was there partying? Yes.
Nassim, hot off his pro board and Peace offering, got thrown out of a strip club for jumping across stages and attempting to out dance the performers. I have a new found love for him. He’s something special with his level of talent and perspective on the world. He got a beauty’s phone number and filmed a dope line all at the same spot. He’s enjoying himself and it outwardly shows. I like that. Congrats, Nassim! Max, our lensman, wandered his way through can after can one day, all the way into the corner of my room to take a shit in the middle of the night. Like a deer in headlights, I caught him just before the christening. I never told him about it. In fact, it’s quite possible that reading this will be the first he hears of it. 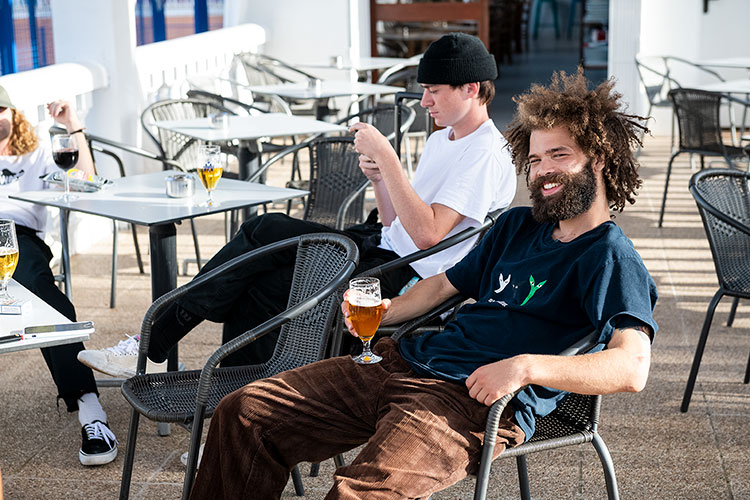 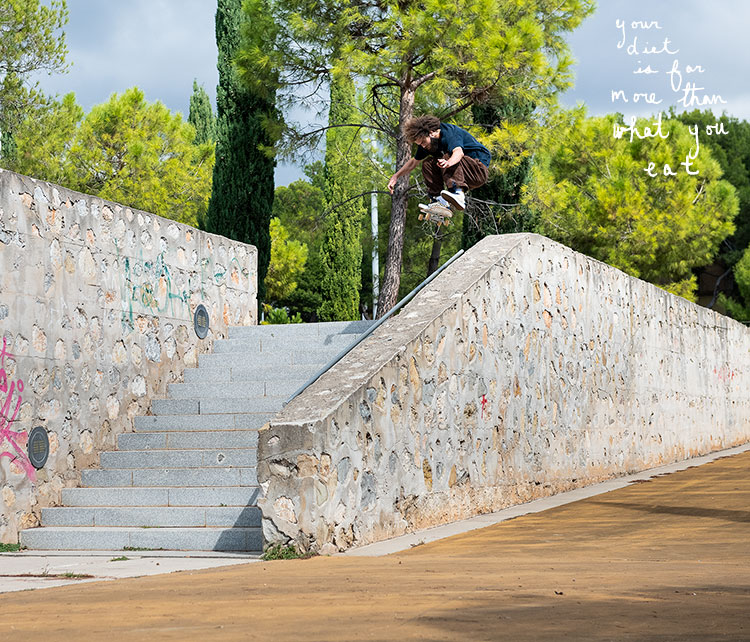 Nassim hasn’t touched down (or slowed down) since his pro part dropped. Beautiful kickflip in between the lifestyle. Not bad, Nassim! 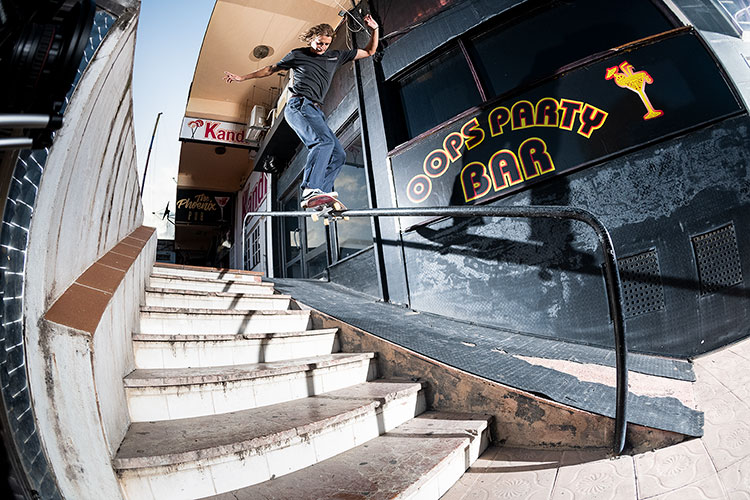 This rail was at a bar called Oops. Unreal. We watched with drinks in hand while the boys handled business. Hurricane Axel hit the island hard
 

Were there theatrical interactions with the locals? Yes. There were two types of locals: type A and B.

Type A:
In the hills above the tourist zone, there are spots. We pulled up to a long rail and the run up was literally a bar, like a patio pub. After eyeing it for a few minutes, the owner hastily came towards us, so we began to vacate as we always do. Before making it very far, the man enquired about our intentions. Happy to learn the goal was a stunt on his front porch, he began clearing tables, opening up more runway. We couldn’t believe it! Axel handled a hefty boardslide as the local audience watched and cheered. As we celebrated, the owner came forward to top off an already sweet deal with a round on the house for the boys! No way! Hospitality like this is nearly unheard of and goes to show there are special humans all over this crazy world.

Type B:
There is a famous spot in the center of Mallorca that’s shaped like a postcard. It’s awesome but the bust factor is through the roof, so we hit it early to try to avoid the cops. As the town awoke and the boys warmed up, a good citizen came to enforce the no-skateboarding policy. Drama ensued. As she frantically voiced her disapproval, a man arrived and came to our defense, going so far as to call the cops on her for harassing us! What a turn of events! The situation quickly escalated with the woman grabbing Joe’s flash stand and trying to run away with it. Axel intercepted and stopped her but she wouldn’t let go. Another man was filming the entire episode and the lady asked him, “Why are you filming me?!” He replied, “I’m filming you because you just stole these guys’ camera equipment.” Infuriated, she stepped towards the guy and knocked his phone out of his hand. Without a second thought, the guy open handed slapped her. Now, to be clear, we ’boarders in no way condone violence whatsoever. None. Period. I’m just reporting the facts here. All of us knew that the shit had hit the fan and that it was time to split. The crew headed up a nearby hill and Pfanner snuck back to pick up the van. Lo and behold, he runs into the lady who instigated the whole scene, only now she’s the complete opposite in character—sweet and apologetic. She told him she was in the wrong. We reap what we sow. 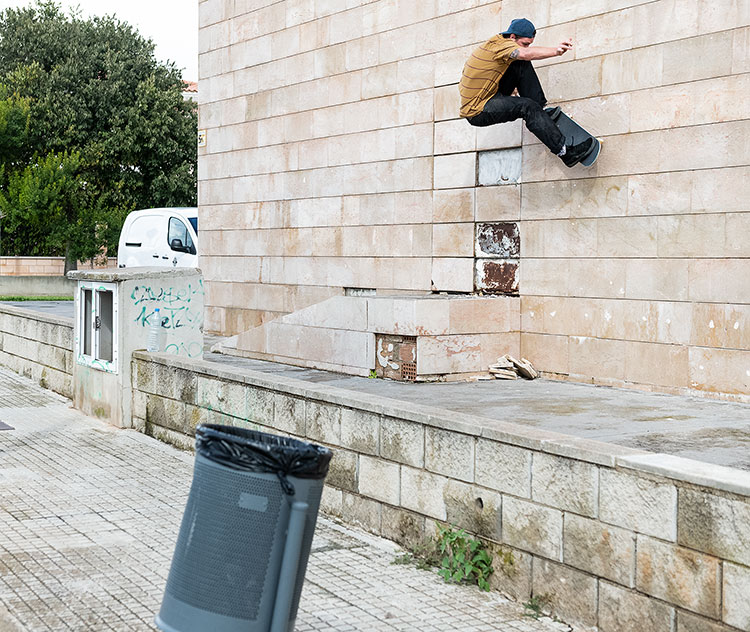 Jackson Pilz has power—look how high he is! Frontside wallride in between dance sessions and kickouts 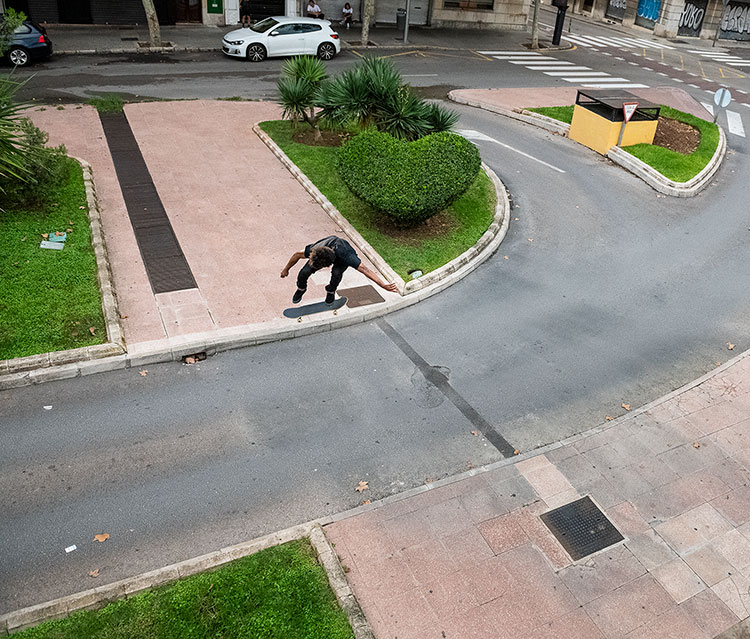 It’s always fun being thrown into the van, especially in exotic locations. You learn a lot about one another and really feel the highs and lows in such close proximity. The camaraderie builds itself and is as cherished as the precious content collected from these tours. One of the most special things about being a traveling pro skater is the insight you learn from one another’s lives. We are brought together for our common passion yet come from entirely different corridors of growth to get there. The relationship gains and awareness is something I will cherish long after the van stops rolling.
  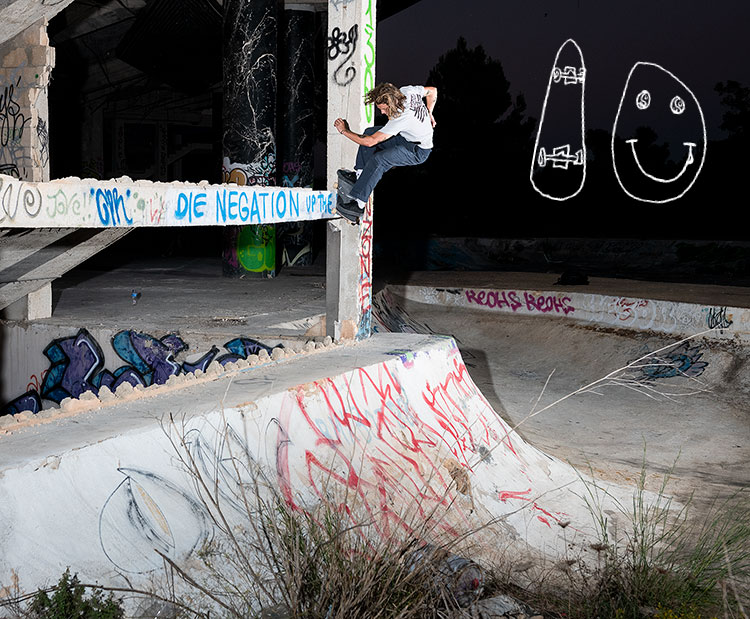 We kept ending up at this abandoned theater—mainly to throw shit off the roof. On our final visit, Axel came through with a gnarly Smith in the golden hour. Excelente! 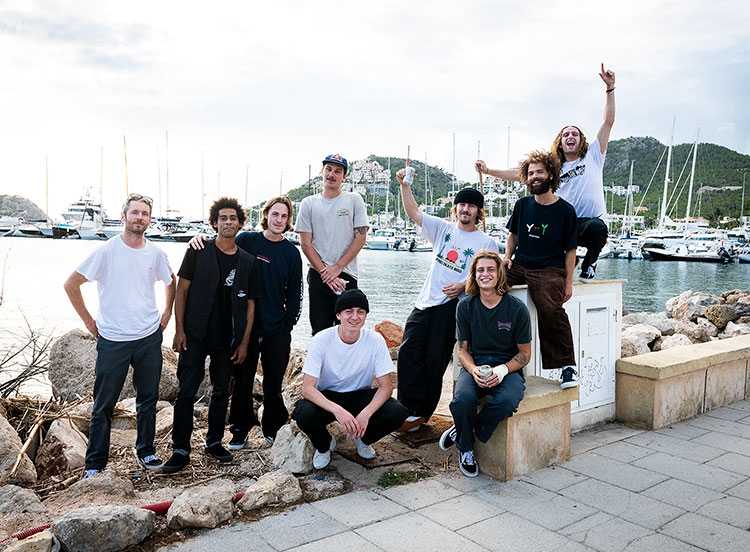