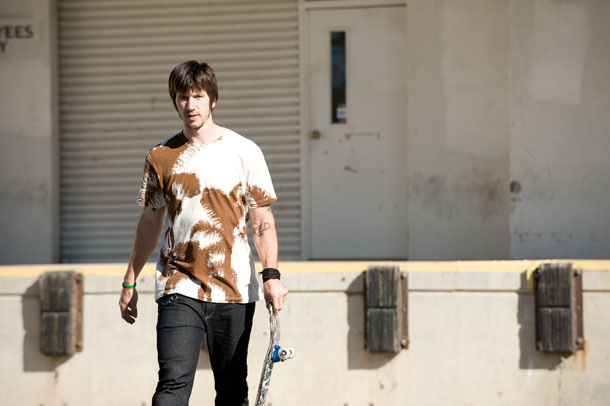 What was your favorite deck graphic over the years?
Off the top of my head, I have to say the MMVI graphic. I have it tattooed on my right arm.


When did you start skateboarding, and why?
I started in 1990. The reason was because I saw these older kids skating down the street; they looked so cool. I wanted to do what they did. Once I got a board I couldn’t stop.

What type of offers have you received? Has Plan B tried to get you on their super team? How about Gatorade or Jeep?
Over the years I’ve had some crazy offers. The most recent was some guy with a crew cut came up to me while I was skating a ditch. He was walking his dog and asked if I was professional. Then he gave me his card, said, “I want to talk to you about riding for an organic energy drink, our views are very conservative, though. Do you feel you’re a good role model?” That was pretty much a no-go from the beginning. His card had his picture, an American flag, and “in God I trust” written at the bottom.


Who can beat you in SKATE?
A lot of people. I get beat by Jamie and Tom Asta all the time. Billy Marks beat me the other day, too.

What Bands suck?
Tons. It feels lame to say it, though, ’cause its someone’s whole life that you’re shitting on when you diss their music. But I will fire one off anyway. Creed, they blow.

How much has having a kid ruined your life?
Either this was written by a young dude—who hasn’t grown up yet—or a really selfish person. And don’t get all bummed ’cause I said that, but if you have a child and you’re unselfish, you will see that you give yourself to your child. You love your kid more than your wants. It doesn’t ruin your life; it provides more purpose. 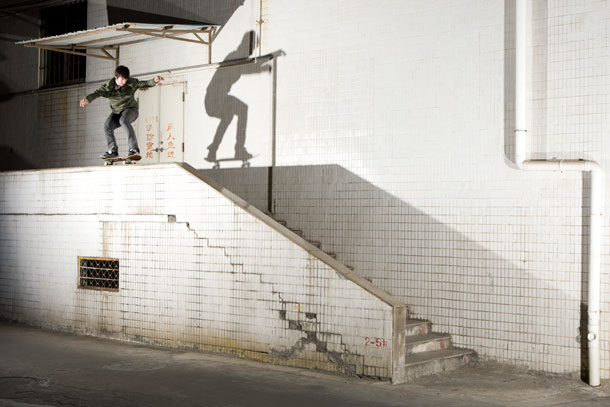 Would you and Jamie Thomas ever get BFF tattoos?
Absolutely not! I’m sure he would say the same. He’s my homie but we don’t hold hands and cry together like this question would insinuate.


If ZERO went down, what other board company would you ride for?
I guess if they would take me, REAL, Toy Machine, Girl. Those are radical brands.

Do you smoke weed? Ever?
Unless its smoking tires, I don’t smoke. (Reference to Joe Dirt). I smoked when I was younger but not for very long and realized that it wasn’t the right thing for me. So I quit doing anything—weed, cigarettes, and drinking. I started drinking again when I knew I was old enough for it to be fine. Like 19 or something.

Tell us about your Enjoi days.
I really like enjoi. The brand is a breath of fresh air. I was on the East and detached from any team member so I was kind of a guy who rode the products, but not on the team. Especially ’cause they are a group of friends. I hung out with Marc Johnson a couple times. He was totally cool. I have always been a huge fan of his, so that was great.

What do you think about Dyrdek’s Fantasy Factory?
I seem to be really out of it, because I’ve heard of this but have no idea what it’s about.

What was your first board?
Toys“R”Us. It sucked, but it was the best thing in my life at that point. So thankful for that board. After that I had a used PowellR (one tail). Then a Vallely elephant, and then a board (I need help finding out what board this is) that had a tortoise and a hare. The turtle had wheels peeling out. My first new-school board was a Slick with a bunch of watermelons on it.

Do you ever play the video games you're in?
I had an Xbox 360 when the first SKATE game came out. I sucked at it but before I could even get my character open my son stood on the system and it never worked again. I returned it to Target. Now I just play Wii.

How many times have you met Children of Bodom?
I’ve seen them eight or so times. I’ve hung out with them probably more ’cause I will see them play the show and hang out at a restaurant or a bar after. If they’re in town I’ll usually go kick it wherever.
Who is the best and worst person to tour with?
Best is Josh Harmony, worst is Josh Harmony. Reason being is that he’s such an awesome person and has such a good heart that it makes you happy to be around him but bummed that you’re such a dick.

You own tons of guitars. What’s your favorite and what kind of tunes are you blasting now?
My favorite guitar has to be the custom ripper Jackson Rhoads. But I feel I should mention my Vai Jem that was a gift from mark grey. My Marcus Henderson apparition epiphany. It plays so good and has a killswitch. My Alexi ESP (Japan) are all awesome. Right now I’ve been playing some Coheed and Cambria, Bodom as always, and a ton of acoustic stuff. Like “Love of a Lifetime” really full sounding music. Always, though, when you get a beat in your head and you just jam to it and lose yourself in the tune, that is always the best.


What do you like better, videos or demos?
I like them both equally. You need one to love the other. I hate just filming without going on tour for a year. I like meeting kids and trying to get people excited if possible. Kicking it live is really important. But without videos, what will someone watch after you leave town?

Did you back three LOVE twice?
Yes. Good eye. We went on a Sunday to film it fisheye, then felt maybe it would look better long lens. So to make the footage not seem too weird I wore the same stuff and went back the next Sunday to do it again. Funny enough, the big green thing I run into is a wooden present under a gigantic tree. People would come to take pictures of themselves with the LOVE sign and the tree all day. One go I ran into the present and put my legs through it, in front of all these people. I felt like a vandal/loser/ogre.


What is your favorite part out of all the parts you’ve filmed?
Ride the Sky. Hands down.