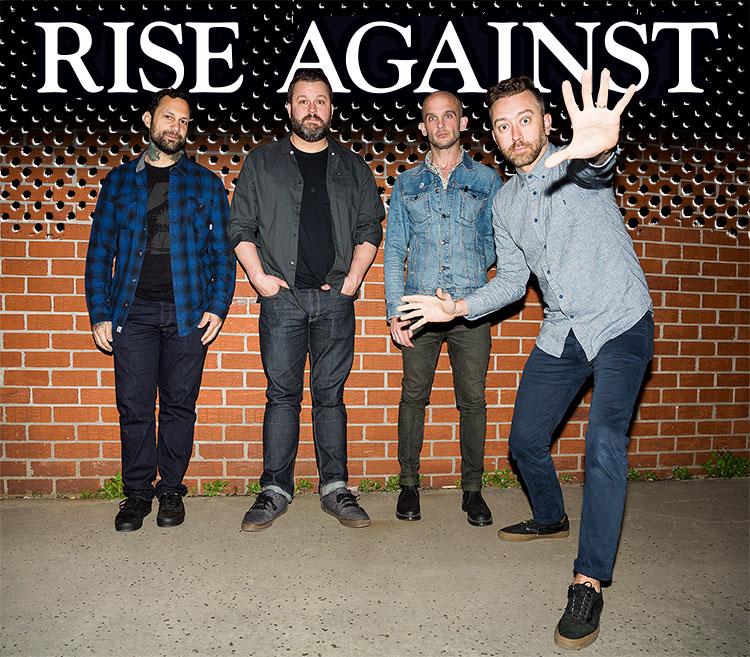 In light of the recent political climate it would be surprising if we didn’t see an abundance of punk records come out over the next four years. Luckily, Rise Against was working on a new album as the current administration got elected which resulted in WOLVES, the bands eighth studio release with 11 unapologetic tracks on Virgin. Long-time skater and bassist since the band’s inception, Joe Principe, took some time to talk before playing to a massive wolf pack at the House of Vans in Brooklyn. —Jordan Joseffer

So you’re about to play the House of Vans here in Brooklyn. What’s your relationship with skateboarding?
I started skateboarding when i was in 4th grade and I’m 42 now, so that probably puts me in ’85 or ’84. It was kind of like skateboarding first then punk rock after. I got into skateboarding because I literally found one on my block just sitting outside and I took it. It was a Variflex.

Having grown up skating in the ’80s and reading Thrasher, how much do you credit our music section to helping you get into punk?
One-hundred percent. I mean, growing up in a suburb of Chicago, Thrasher was the quickest way to the music scene around the world because of Notes from the Underground. I got into Bad Brains because of Thrasher, Underdog which is a New York Hardcore band. I found out about the Circle Jerks record VI was coming out when I was getting into skating because of an ad in Thrasher. Soundgarden—I didn’t listen to Soundgarden but I remember seeing the ads for their SST record. It’s pretty awesome. I would buy a Thrasher and go right to Notes from the Underground and read about music.

Vans just opened a new spot in your hometown of Chicago. I think these venues are pretty amazing. How important is it for kids to have an accessible place like this for both skating and music?
It’s super important. I didn’t have any of that growing up. The only skatepark that was near me when I was growing up was in Rockford, IL, called Rotation Station and The Turf skatepark in Milwaukee. Those were the only skateparks in the area with real cement bowls. I used to see pro skateboarders skate there. Allen Losi, the Alva guys were there, so it was really cool to be able to do that but it’s still, like, an hour and half drive from Chicago. I would have to beg my mom to take me.

It’s cool to see that skateboarding is being more recognized and cities are now building skateparks instead of tennis courts. I mean, the same amount of park space can be used by hundreds of people instead of two people.
It’s poor use of real estate. Put skateparks where tennis courts are.

You guys big Cubs fans?
You know what, I’m not into baseball at all but our singer Tim is a White Sox fan. He was raised a Sox fan but I can certainly appreciate the Cubs winning last year. It was cool for Chicago.

Pretty crazy they won the World Series and Donald Trump got elected president in the same year. Pigs are going to start flying any minute now…
Yeah, it’s a bizarro world. 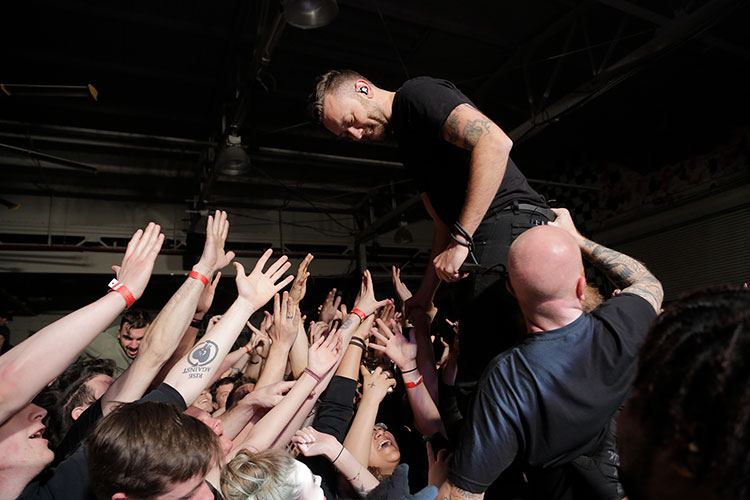 Let’s talk about WOLVES. Did this election season shape the album?
Well, yeah, it’s interesting because we started writing the record pre-election. Our singer Tim writes all the lyrics and he was starting that process, then the election happened and he realized the lyrics he was working on kind of didn’t really apply to what the world would be in 2017, so he kind of had to take a step back and think about the direction lyrically, like, where we were going to go.

You guys recorded it in Tennessee?
Yeah, we recorded it in Nashville which was our first time deviating from Bill Stevenson from the Descendents and Black Flag. He recorded almost all of our records in Ft. Collins, CO. This was the first time in years that we changed things up. It was awesome and a little scary at times. It ended up being pretty cool.

Was it weird recording such a politically-motivated album in a red state? Any frustrating interactions?
I personally didn’t. We were a little bit out in the country so we were pretty secluded. But I will say the seclusion helped me focus on the record more. There were less distractions.

One of my favorite hardcore albums is SSD’s The Kids Will Have Their Say. From the tracks to the title to the cover image of the kids running up the steps in DC, it’s empowering. Do you think WOLVES will have the same impact?
Springa lives in Chicago! Yeah, 100 percent! It’s funny because as we got bigger in the mainstream world we still try to carry that over even in our slower songs. That urgency, that positive message that bands like SSD had or 7 Seconds or Bad Brains. That is so rooted in us and it’s present in WOLVES. I would say it’s present because it’s all we know, just growing up listening to all of those bands. It’s really important because that’s what drives us as a band.

What can we do when it feels like nuclear war is looming and we have no say in it?
All we can do is have hope and faith in humanity that we won’t go that way. I know it seems difficult at the time but I like to think that clearer heads will prevail. There should be enough people surrounding Trump to hopefully stop him. I feel like the more he’s in office the more Republicans around him are, like, “Whoa, what the fuck are you doing?” I have three kids and raising three kids in a world like this is scary. I mean, I was telling my daughter pre-elections that we were about to have the first female president and then he got elected. It blows my mind.

You guys just covered CCR’s “Fortunate Son.” Why that song?
That song is so relevant today, obviously, and I think peaceful protest inspires change. Whether it’s standing outside of a business you don’t agree with or whatever. In it’s simplest form, voice your opinion and that’s all we can do and that’s how change is inspired. That’s how we can move forward so that’s why we’re always stressing that to our fans.

Anything else you’d like to say?
Thanks for the interview! It means a lot to me personally because I’ve always associated my punk rock roots with skateboarding and vice versa, so this is a big deal to me.