Tales Of The Skate Tank 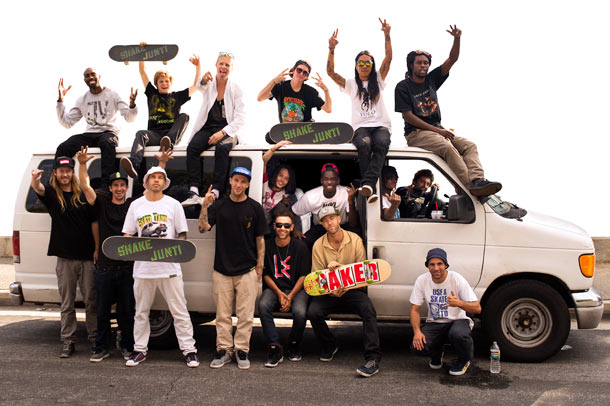 It was the summer of 2006 and Baker had just rented an apartment in Hollywood. Having the team closer together was convenient, but I was still the only one who owned a vehicle (my 2001 Saturn SL2). Dustin soon convinced the Boss Mane (Andrew) that we needed a team van for full potential.

We went to the local Ford dealership used lot and found the answer—a 2003 Ford E-350 with less than 20,000 miles at a reasonable price. We christened it the next day by taking it on a filming trip to SF. Antwuan inflicted the first damage instantly with a nose stall on the passenger foot step, causing it to sag and endanger anybody’s ankles who dared trust it to hold their weight. Later that day in traffic at the Golden Gate Bridge, I noticed another driver sharing laughs with our passengers as they rolled up a blunt. That’s when I realized we needed tint on this van asap. After returning back home to LA, it dawned on us: We’re not on a trip, but we still have a van. It’s officially like being on tour every day! We can pack in 15 skaters, stay equipped with lights, generator, product and blend in with the public like an innocent church group. We rightfully named this van “The Skate Tank." —Beagle 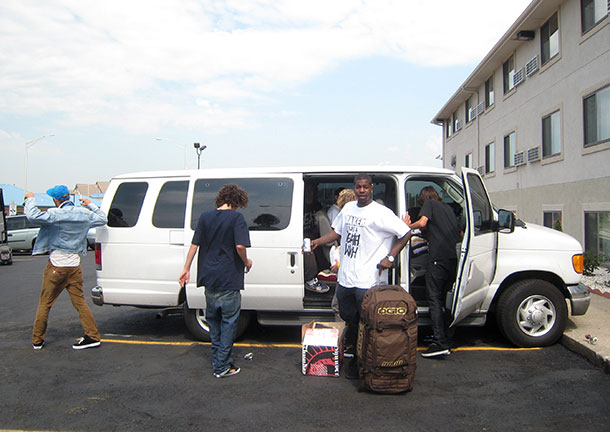 HERE ARE SOME TANK TALES...

• The permanent stench of sweat and weed fill the air as rolling papers and sunflower seeds cover the floor. Like a soft-spoken Mike Tyson, The Tank’s horn is surprisingly quiet. Every newcomer helplessly tugs at the sliding door expecting it to open, but it has to be opened from the inside. Herman somehow made a useful adjustment to that same door. He disconnected the light sensor, allowing anyone not skating to lurk in the van with the door open for fresh air without the dome light draining the battery.

• Besides me, other trusted Tank drivers consist of Doughnut, Andrew, Reno, and Riley Hawk. When DJing in The Tank make sure your iPod volume is set to three-quarters high. If need be you can turn The Tank stereo volume to maximum instead (sounds crispier). Ritually, the first song I play in The Tank every day is “Float On” by The Floaters. It’s the smoothest song to start off any hectic, unpredictable adventure. Kinda like a breakfast prayer. Joints may not be passed while driving through any intersection and farting in The Tank is prohibited. 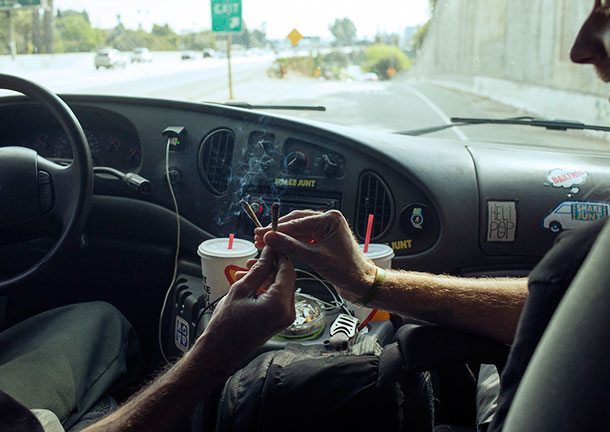 • On it’s journey to countless skate missions from coast to coast, the Skate Tank has embraced plenty of hijinx: Furby once wrote “Fuck Cops” on the steering wheel, making it extra sketchy to get pulled over.

• The Tank has seat belts, but Nate Mate (from Australia) has been the only person to actually wear one in the back seat. It tripped everyone out! 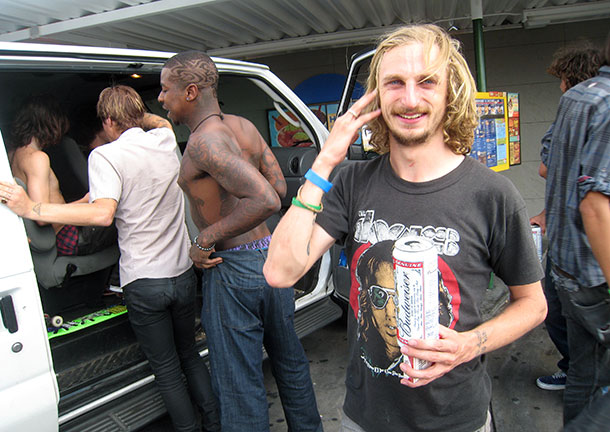 • One night in Washington DC at 3am, we returned to find the van with its doors wide open, my camera bag on the front seat and Lizard passed out in the back. It was miraculous that everything was still intact!

• On an Altamont tour in Texas, Kenny Hoyle tried to piss in a bottle in the back of the van for 40 minutes straight. He couldn’t overcome the awkwardness and yelled that we pull off the highway. On the other hand, Neen had no trouble peeing himself on the back seat during his first Tank experience in Chicago. He explained that he was high on mushrooms and was granted forgiveness. Later, while in New Orleans, Antwuan spilled a hurricane slushy and slurped it up off that very same seat. 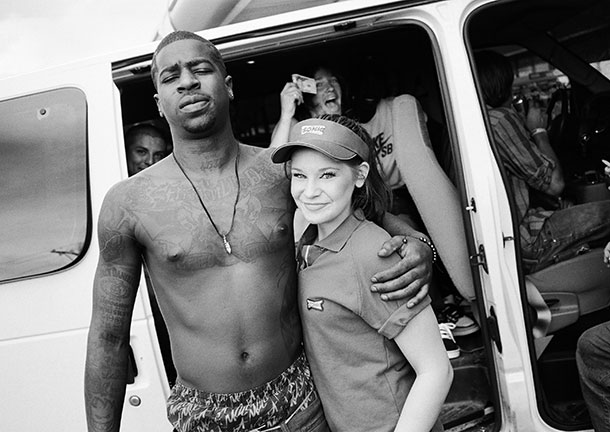 • The gouge on the right side of the hood was caused by me leaving Ellington’s house in the dark. There was an intercom at the top of his steep driveway. I didn’t see it and The Tank plowed it over. Erik called me over the next day to mix cement and replant the useless intercom. Rightfully so. The Tank also apologized to Erik by letting him use its roof to noseslide a building (seen in the Deathwish video).

• Another small collision occurred when I was changing radio stations and swerved into a diesel truck on the freeway—only to break the driver’s side mirror. Luckily the glass district in LA was just an exit away. Fifteen minutes later and only 25 dollars poorer, we had a new mirror and we were on our way to the next skate spot. Could have been much worse. 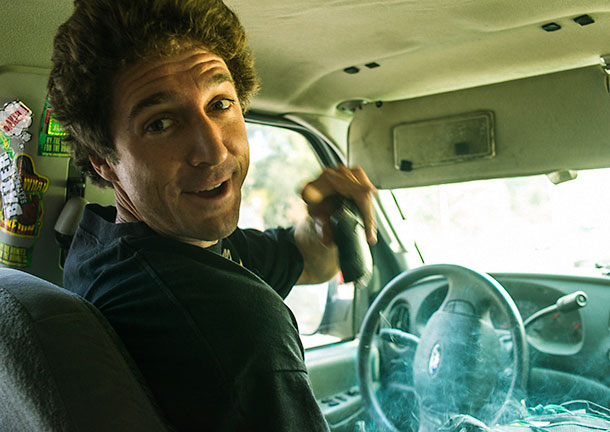 • After doing a Weekend Buzz interview with Dustin in San Diego, we had Doughnut drive us home because I was too wasted.

• Sitting shotgun with my head spinning, I tried to throw up out the window. The strong wind on the freeway blew my vomit back into the side window and got all over Dustin and Dee (who was rolling a joint). For the next five days, Shane had to sit shotgun with the lingering stank of my guts while on a Goat tour to Seattle. 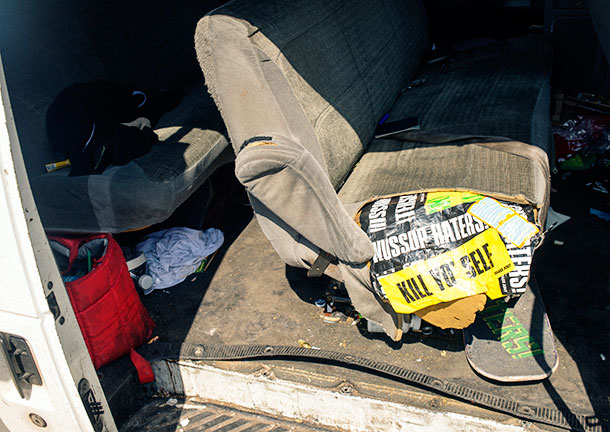 • Braydon once punched and shattered the windshield while riding shotgun on the way to a Baker Christmas demo. Somehow The Tank forgave him.

• On the way to a local signing, we stopped by Rite Aid in Studio City to buy tapes. I saw Arsenio Hall in the parking lot and I pointed at him, yelling, “Arsenio Hall!” Then I waved my fist in a circle, shouting, “Woof, Woof, Woof!” He gladly returned the gesture and blessed The Skate Tank with his own patended “Woof, Woof, Woof!” 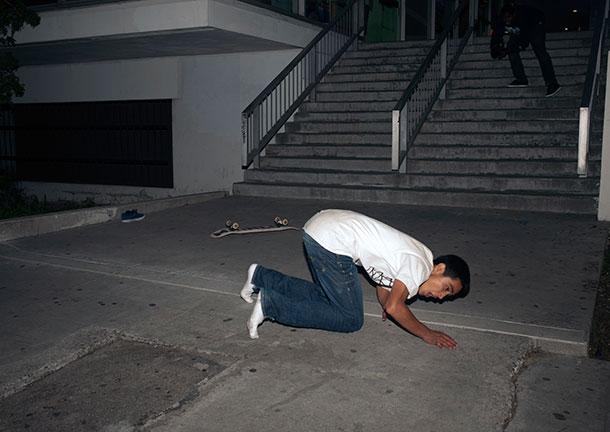 • Doughnut once drove a kid to the hospital who broke his arm skating the Wilshire ten stair. Meanwhile, Andrew proceeded to half Cab kickflip nose slide the rail.

• We parked at a Wienerschnitzel in Burbank for dinner. As I was explaining to Braydon why this particular Wienerschnitzel was the only one that had a liquor license, I slammed the side door with my hand still inside. Braydon was somehow able to grab the keys and rescue my paw from the Tank un-severed. 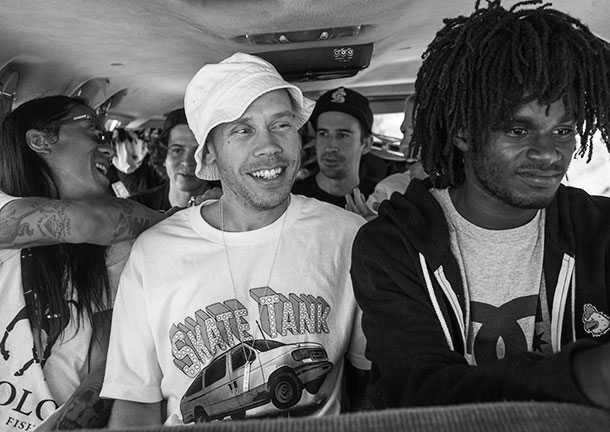 • Nuge introduced us to an addicting game called “Urban Jellyfish.” You play by catching floating plastic bags out the window of The Tank. It not only feels amazing being at the right place at the right time, but helps save the environment. The Tank has three captured bags wrapped near the door handle. Looks like trash, but they’re trophies forever. Nuge caught the first in Vegas. I caught the next two in LA. Herman once spilled weed off his lap trying to reach for one—and failing. With bags costing ten cents these days, they’re even more endangered and therefore more rewarding.

• The Tank’s mileage today reads 217,144 and continues to provide the fundamentals and protection needed for some of the greatest skateboarding moments in history. Thank you again, Andrew, for blessing us with the gift and the help of The Skate Tank!