Foster Huntington is an interesting character. At only 29, he's on his third career. He was a rising star in the NYC fashion world and quit that gig to live out of his van for three years, surfing and shooting photos for Patagonia. He currently lives in a treehouse in Washington and spends his days skating his private bowl and making really awesome skate-centric stop-motion animations, titled Pool Scum. I hit him up to talk about his inspirations and aspirations. Dude's chill.

P.S. if you hate reading just scroll to the bottom and watch the video. 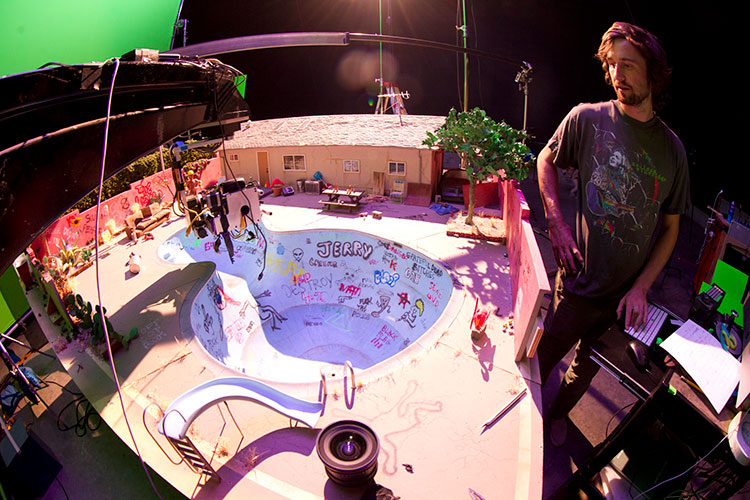 How long did it take you guys to complete this Pool Scum project?
It took us about seven months from starting to build the set to finishing the post work. Building the set took about three months and then we were shooting for four months.

Who's on your animation team?
Our special effects guru is named Matt Emmons. He's worked in stop motion and before becoming part of Movie Mountain, he was a camera operator at LAIKA, a stop-motion studio in Portland. Kai Korsmo headed up the fabrication of the sets and models as well as doing puppet maintenance and rigging work. Alexa Schreck designed and made the costumes and Tim Huntington made the miniature plants. Being a small crew, everyone kind of pitched in everywhere. We mainly worked with a freelance animator named Kyle Stephens on the sequences. 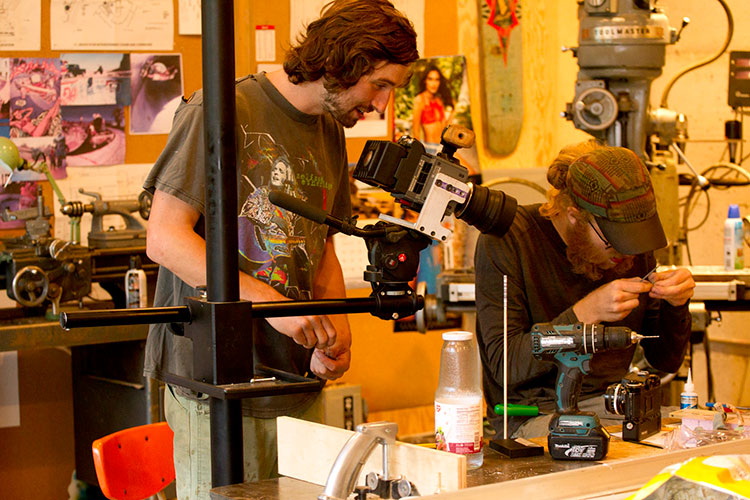 Were you inspired by the Jason Jessee claymation dream sequence in Streets on Fire? What other animations inspired these videos?
That was certainly an inspiration, but more than recreate that look and feel, we wanted to use modern stop-motion techniques and gear—like motion control and lights—and do something that felt like skateboarding. Instead of doing the standard 12 frames per second, we did 24 frames per seconds, which is fuckload more work.

How about Flip's Extremely Sorry, did the claymation bits in that have an impact on you as a youth?
I honestly hadn't seen that until I Googled it just now. I grew up with Will Vinton's kids. Will invented claymation and had a big studio in Portland in the '90s. He did the California Raisins and shit. He's a real legend in the animation world. I was also super into Wallace and Gromit as a kid, so I would say those are big inspirations for me. 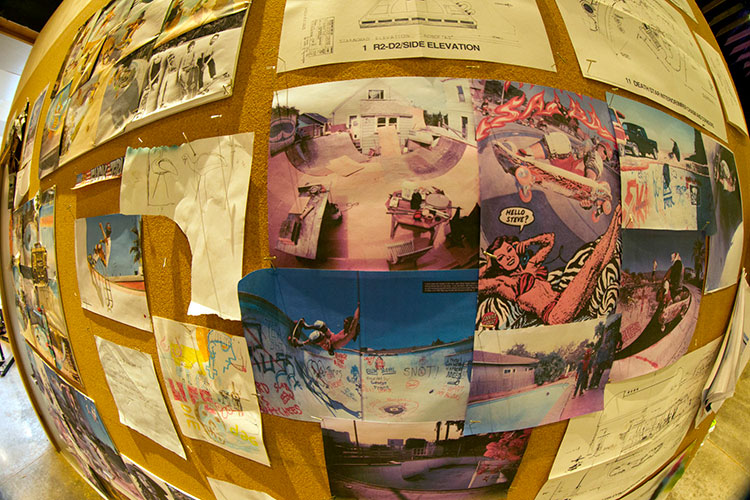 It seems like you're drawn to the '80s era of skateboarding but you look relatively young. How old are you? What is it about skateboarding's past that you like more than its present state?
I'm 29 and grew up in rural Washington. My exposure to skating and action sports, for lack of a better word, were movies like Thrashin' and Rad. As a seven year old, I'd beg my mom to rent them for me instead of Air Bud or some shit. I didn't know what was cool. I just knew that it looked way more fun to me than some sports movie. As I got older I loved Animal Chin and Wheels of Fire. I loved how they looked and they weren't afraid of going for it. They seemed less self aware than the videos of my youth, like Yeah Right! and Sorry.  When we finished the studio it felt fitting to make a stop-motion skating project because that's the common ground that everyone that works at Movie Mountain shares.

Explain what Movie Mountain is.
Movie mountain is small special effects and stop-motion studio that combines practical effects technology with modern cameras, lighting, editing and compositing tech and makes stuff for the Internet. Think miniatures like they used to make the first Blade Runner but for shorts, music videos and such. 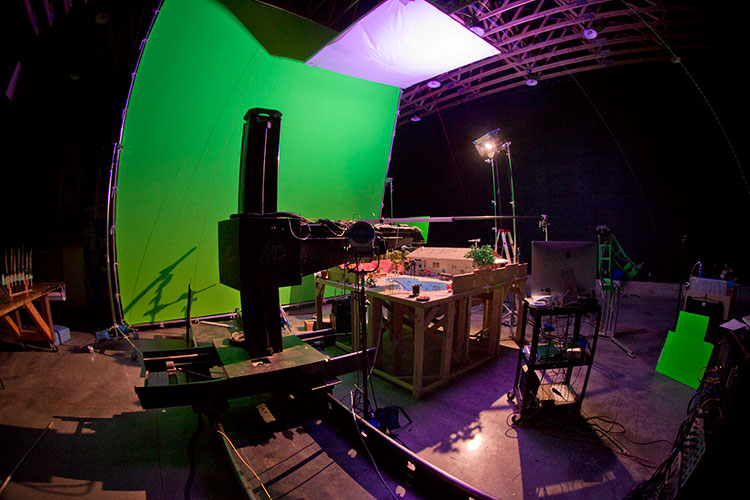 The scene is green at Movie Mountain

Have you ever visited moviemountain.com? I typed that in looking for your guys' web presence.
Yeah, it's so rad. I'm playing hardball with them trying to buy it.

Do you feel like skateboarding is less creative or artistic than it was before it became more mainstream?
Skateboarding seems to be either super cool guy, like Fucking Awesome, or stuff like Street League and the Olympics, which might as well be performance sports. Neither of which captures what gets me pumped about going out and skating with my friends. But I think there's still tons of creativity in skating. There always has been and there always will be. It just seems like there's so much pressure on skating to be something commercially viable, either in the form of something like a t-shirt company getting kids to line up around the block on the Lower East Side or the next big sports category at a Foot Locker in Iowa.  I wanted Pool Scum to be something that was just for fun but rooted in the experience of skating a bowl.

Have you skated a lot of backyard pools?
Yeah, I've skated backyard pools before. I think Ed Dominick might have a photo of me skating a pool in El Centro. Growing up in the Northwest, there weren't a lot of abandoned pools so my friends and I built some backyard ramps and we skated tranny at parks like Hood River, Burnside and Orcas Island. Places like that.

Who are the two characters in Pool Scum based off of? The clean-cut guy definitely has some Hosoi vibes going.
We wanted to do an old-west showdown between a hesh skater and fresh skater, so we cherry picked parts of our favorite heshers like Al Partanen and based the other character off of dudes like Hosoi. We weren't really too concerned with it being time-period specific. We wanted the hesher to be a modern pool skater like Cody Lockwood or Greyson Fletcher. 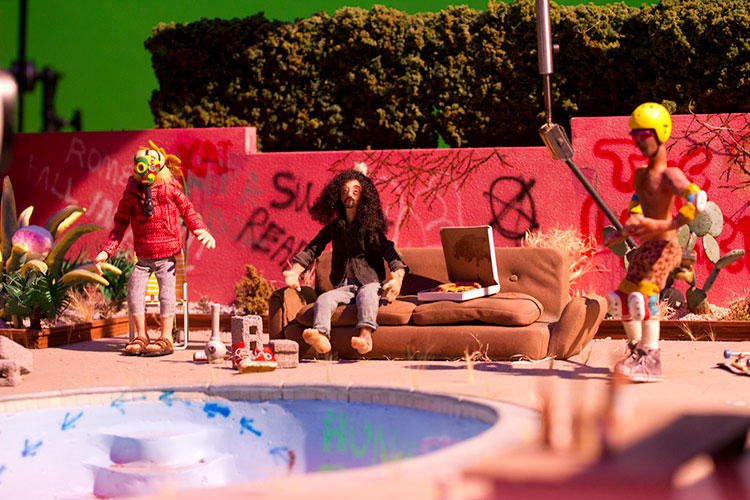 Hesh vs. Fresh, the war rages on

I was going to ask you if the ollie one foot was based off of Greyson's. Were there any other specific rider-inspired moves in there?
We referenced an eggplant by Lance Mountain and, yeah, Greyson's one footer for the hesh guy. For the fresh guy we referenced Hosoi and Cab for most of the shots.

Who do you think won the bowl battle?
Honestly, I don't know. The hesh dude's first line is my favorite piece of skating in the whole video. I wanted it to be pretty even, though.

What's the end goal for these videos? Are you going to make more? Do you want to turn this into a career, get a Netflix deal going?
I love making stuff and think that short stuff is going to get more and more important. The reality is that people watch most shit on their phones, so why not embrace that and make stuff that takes advantage of the platforms where people are looking at shit? Social media is a window into someone's world, and who's to say that world has to be real? I'd love to do a show with Netflix or someone but there's plenty of amazing stuff on there. I'd rather do another three-minute Pool Scum short where they're running from the cops and bombing hills than do ten 28-minute episodes. 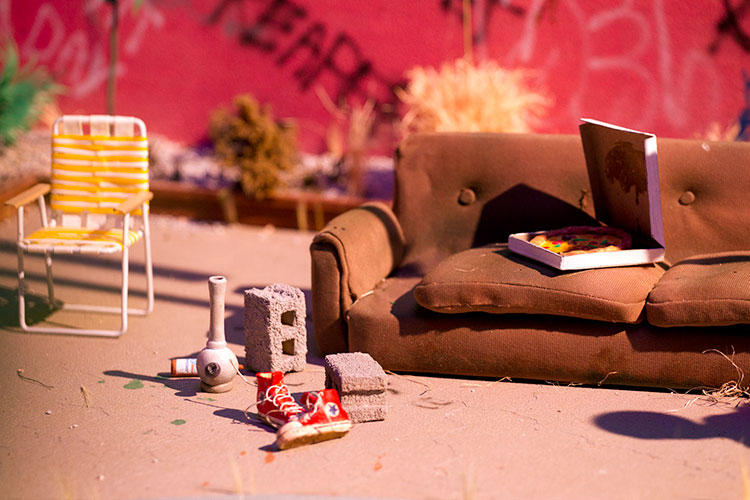 Every last detail, down to the bong ash

Explain your property. What do you got going on out there?
I live in a treehouse in rural Washington and have a small bowl and a film studio on the property. The studio is the newest addition and it's what I'm most excited about. We have a fabrication shop and a 2,500-square-foot sound stage and an edit and design space. It's like I'm playing with Legos making shit with my friends.

Do you plan on having events on the property, music or skating related?
We've had a few parties that got a little out of hand and I've tried to keep it pretty mellow since then. I'm pretty shy. Could be cool to have a bowl jam, though.

Can anybody come and skate and hang out in the tree or is it invite only?
It's invite only. At the end of the day it's where I live and it's hectic to have people around all the time.

So you live in a treehouse and spend all your time making stop-motion animations, correct? How do you pay the bills, man?
Yeah. Ha! I live in a treehouse and for the last seven months have been working on a miniature skate scene. I've also done a few photo books and do commercial stuff occasionally. In the past, I lived in my van traveling around, surfing and taking photos for companies like Patagonia. Now I'm focusing 100-percent on Movie Mountain.  We're currently shooting some shorts for friends and a few commercials. 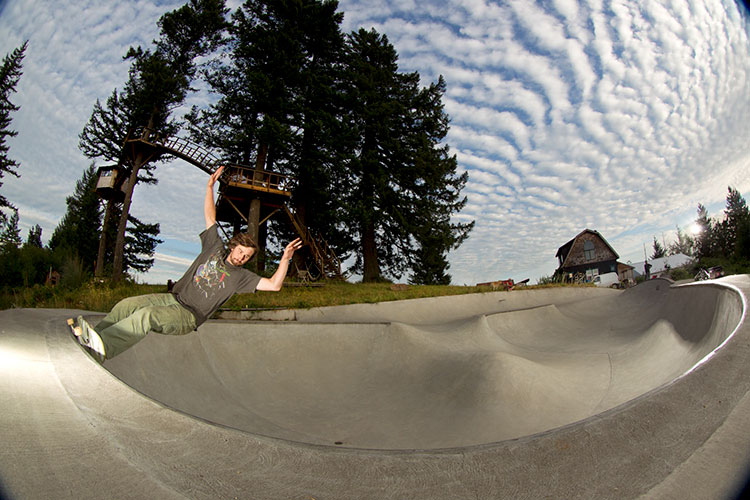 Foster carves some coping in his private bowl. Somewhere Peter Pan is smiling

So, I know you worked in the fashion industry in NYC and ditched that life. Then you lived in a van for three years and now you're working on Pool Scum. What's next?
I want to keep making shorts and films. I'd love to make science-fiction movies and Westerns. I love that shit.  World building is so fun. One of my favorite parts of working on Pool Scum was building out the whole backyard scene: spent pizza boxes, a dying weed plant, a fucked-up free mattress, the nasty couch—details like that make a world feel real. I want to make shorts and music videos, too. I'd love to make more stuff like Pool Scum. It could be cool to do a '90s edition where they come back and skate again, a street skating thing, dudes in JNCOs getting tech. Ha! I have no shortage of ideas of things I'd love to make. It just depends on what opportunities arise.

What do you want to tell the bored kids out there?
Go make shit with your friends!