I kept trying to think of a super-cool name for my Thrasher web column, but I finally came to terms with the fact that I'm not cool; I'm a Texas nerd, a ditch dork, an art geek, a coping waxer. This section of the Thrasher site will be for all you other skate nerds out there. There's no set format for this column. It'll just be about random skate shit that I find interesting. So come along on this voyage. Or just sit back and hate. I honestly don't give a shit. –Michael Sieben

Habitat's head honcho talks about the brand's move to Tum Yeto and sheds some light on how the Alien Workshop ship crashed. 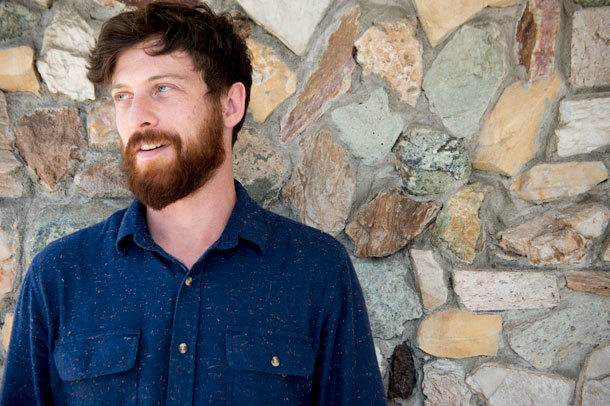 So Habitat will now be under the Tum Yeto distribution umbrella, right? Was there ever a discussion of Alien moving over there with you guys?
Yes. Super stoked Habitat will be a part of Tum Yeto. I can't really speak for AWS.

Did this whole Alien/Habitat shit storm come out of the blue, or were you guys forecasting its arrival?
I think everyone involved probably has a different take on it. I had a pretty bad feeling within the first few months that things with Pacific Vector could fail.

Can you give a brief description of what exactly happened?
I have written and deleted this answer for two hours. Ha! I guess I don't know what really happened. Towards the end, it was just a dream-like clusterfuck of business mismanagement, contract obligations, egos and human behavior that had almost completely taken us out. Back in 2012, Dyrdek bought us from Burton with good intentions for the brand. He partnered with La Jolla Group to cover sales and distribution. Idealistically, they weren't the best fit for us, but they did know how to make products and deliver to shops in a functional way. After La Jolla changed management and clipped the skate brands, we were left with little time to find a new business partner. We talked to a few interested parties, but unfortunately ended up with Pacific Vector. From there, the story just turns into a six-month episode of The Office. I won't get into all of the dark details, but many people were fucked over. They stopped paying our pros in April. We were all laid off on May 16th, and I went straight to work—finding a way to save Habitat. Thankfully, Rob and his people have saved both brands' intellectual property from going down with the PV ship, right in time. 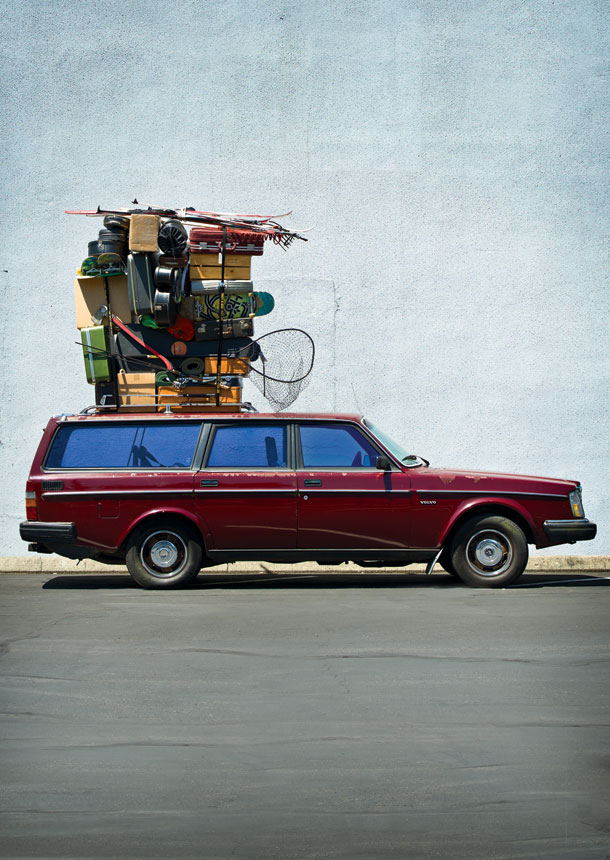 Did you have to buy back the Habitat name or anything like that? Was the logo or trademark ever out of your hands?
We went through a scary period without control of our own logos and trademarks. It took relentless negotiating and strategizing from all involved to save the name and trademarks.

Habitat footwear is getting cut, correct?
Yeah. We have simplified things by going back to just decks, accessories and apparel. We may take on some fun projects with shoes in the future, but It would probably be more like lifestyle shit, such as hiking.

Has there been any rider fallout during this transition? How's the general morale at base camp?
Luckily, no one has left since Austyn. I am so grateful for that. Morale is improving with all of the good news, lately. A lot of them had lost hope this past winter and spring. It was really frustrating because everyone is so down for Habitat, and we were watching it deteriorate before our eyes. I really think we saved it weeks before it imploded, and I honestly wouldn't have blamed anyone for leaving at the time. They weren't being paid at all. 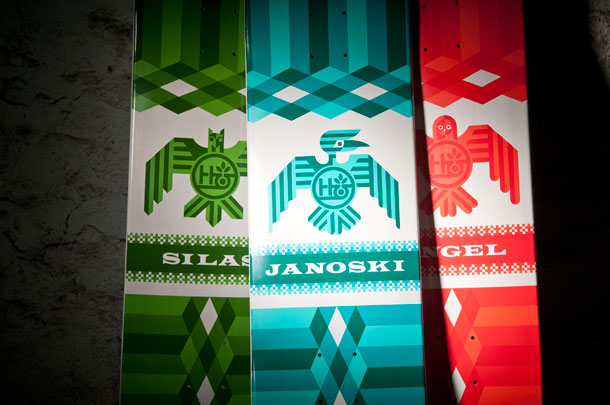 What have the riders been skating while you've been on hiatus?
Kind of a mix of things. We had old stock and wood vendor samples that have just dried up within the past few weeks. Our fall 2014 decks through Tum Yeto will be available for them to ride this month.

Do you have any big, immediate marketing plans in place to let the kids know that Habitat ain't going anywhere—except up?
YEAH! I'm so excited and grateful to get a second chance at all of this. I am editing a three-minute commercial right now that will announce our move over to Tum Yeto, and hopefully make everyone laugh with us.  It's sorta funny and light because I'm so sick of dwelling on the negative. Also, The focus is going to go back to where it was in '03-'07: back to art, video and music as well as just raw skating.

Do you anticipate Habitat releasing another full-length video in the near future?
Personally, I don't think it's very interesting to work on traditional full-length videos, but I'm sure people will continue to make great skate videos. The Vans video will be amazing. Bill's Supreme video was great. It was totally real and original. I like the idea of videos happening naturally from trips or easily from people who are skating super good and accumulating footage without force. I'm also really interested in breaking the mold with short, less-serious web-only videos. 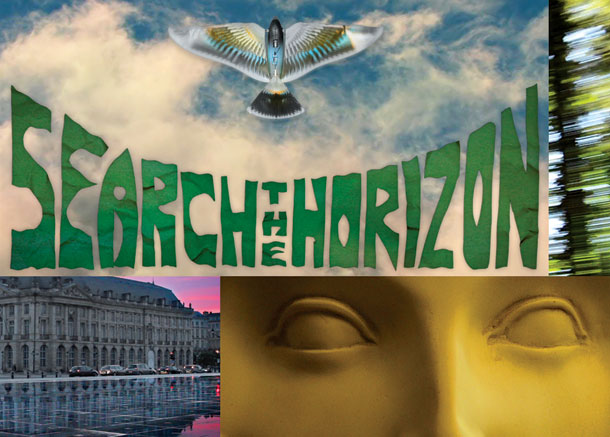 What's your take on the 15-second Instagram video? Do you think in the future kids will expect even shorter offerings?
I like it in addition to regular streaming features. They work for great trailers. I don't think there should be any standard at all for video lengths—whatever works and is entertaining or inspiring.

Any insider info. about what's going on right now with Alien Workshop?
Dude, it's sort of a sacred thing. I grew up in Ohio, and I had worked there since I was 20 years old. I love Carter and Hill. They are the real thing, and they have committed their lives to AWS. The brand is truly limitless by design. The decades of hard work, art, vision and originality is incomparable. I don't have any idea what will happen, but I can't really imagine it disappearing forever.

If you could add one of the Alien dudes, past or present, to the Habitat roster, who would you abduct?
DILL! He is a mad man and I still love his skating. 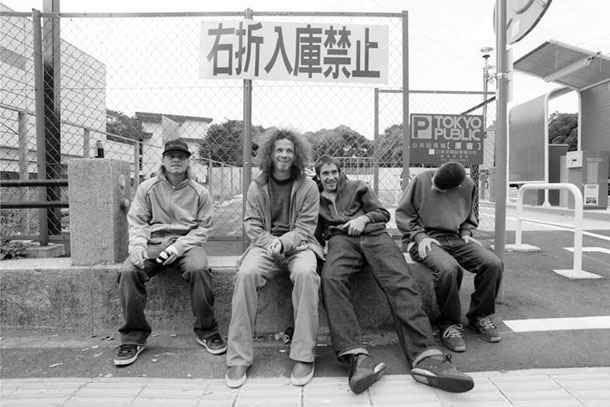 Did Habitat entertain other distribution offers? Did you ever consider going DIY and doing it out of your garage?
I talked to a bunch of people in California but felt the most comfortable at Tum Yeto. It felt like the classic DNA building in Dayton. All of us involved with DNA have spoken DIY for years. Shit, Carter and Hill started AWS in the rawest most DIY way possible back in 1990. I learned everything and owe everything to their hard work. At this point, I personally want to focus intensely on creative work, so Habitat needs a solid business partner to handle sales and distribution. I don't want to juggle commerce and art anymore. I learned that lesson the hard way through the years. Swank and the Tum Yeto guys have been great so far. It feels like DNA did, prior to Burton, when we still had purpose. I currently like the authenticity of things.

Given all the doom-and-gloom talk within the industry lately, did you ever consider throwing in the towel and leaving Habitat in your rearview mirror?
The industry being in such turmoil is kinda challenging. But for now, as long as I can afford to support myself and my kids I'll keep at it. I like the creative freedom and the idea of evolving the brand with the times.

What's your advice to the kid reading this that wants to start his own skateboard company?
Don't force anything. I really think if people are going to start a brand they know it in their gut. Most authentic brands are just a creative outlet or means of communicating a personal message or solution, at least in the beginning.