Not many skateboarders read books, much less write them, so when I saw an email pop up from Walker Ryan with the subject line: “I wrote a novel!” I thought I’d hit him up and get the scoop about his new book, Top of Mason. If you like reading about writing, this interview is for you. If you just wanna watch Walker shred some SF spots, scroll on down and stay dumb. No judgement here. —Michael Sieben 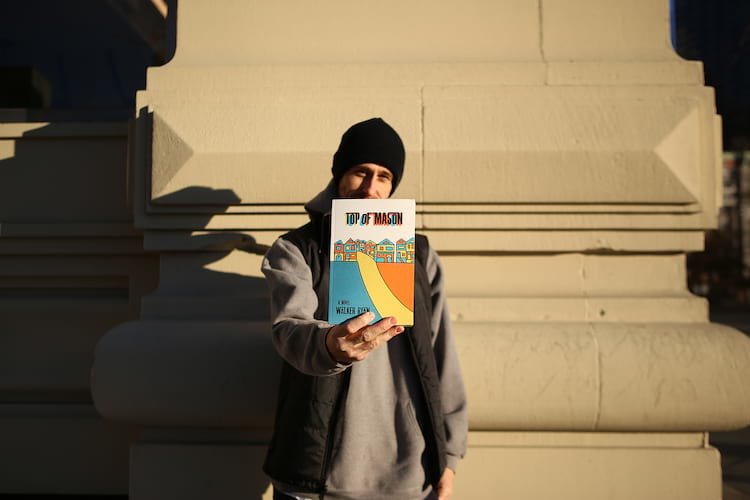 Did you study literature in college?
No, I was actually a sociology major. I took some lower-division writing classes, but literature wasn’t a part of my school experience. I’ve always appreciated novels, though, and growing up reading was always very encouraged, but it wasn’t until after college that I really got into reading fiction.

So when did you get the idea to write a novel?
The idea of writing fiction seemed unfathomable to me until a few years before I actually started writing this. My grandmother is a novelist and I distinctly remember thinking how insane it was that she could just crank out all these original ideas, inventing so many different characters and complicated plots. Actually, it’s still amazing to me. My mother has also written a couple of novels. It was so fun reading one of them, seeing how she tied in little pieces of our lives into the story. In 2013 my friend Nic Henry and I worked on a script together for a TV pilot. It was set in skateboarding and that process was the first time I tried inventing characters and storylines. Shortly after that, I came up with the idea for this story and just started working on it. 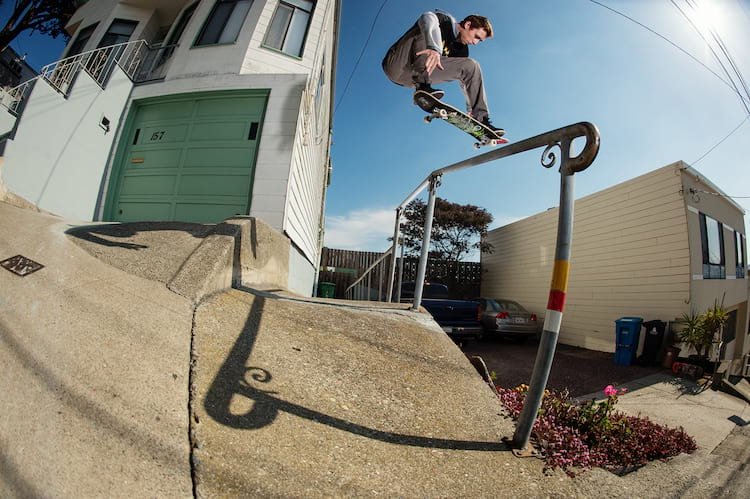 In broad strokes, what is Top of Mason about? Is it loosely based upon your own experiences in skateboarding?
The story is about a guy named Henry who’s been living in SF for about ten years. He’s 29, and even though he was a sponsored skateboarder, he never turned pro and has basically given up on that dream. He’s recently been dumped by the love of his life and he’s determined to get back together with her. After a few mistakes, he finds his life in a tailspin, sending him on a wild adventure into the weird, grimy underbelly of San Francisco. The story isn’t based on my life and Henry definitely isn’t me, but some of my life experiences work their way into the story. There are two other main characters who drive the story—Dev, who’s a larger-than-life skateboarding superstar, and Gary, an ex almost-pro skater who people see as a crackhead or someone experiencing homelessness. There’s no single character that's based on anyone in particular; everyone is a composite of sorts. In other words, they’re each a combination of different skateboarders I’ve known through the years.

For those unfamiliar with SF, what does the title, Top of Mason, mean?
Much of the story revolves around the top of Mason Street. There’s a rad skate spot at the top and it faces one of the gnarliest hills in San Francisco. You’ll have to read the book to find out more…

Is the Bay Area important to the storytelling?
First of all, San Francisco is important to me for a lot of reasons. Both of my parents were born in SF and they also met there, so I wouldn’t be here if it wasn’t for The City. I didn’t grow up in SF, but it was only an hour away, so it was close and easy to get to. FTC's Penal Code 100A was the first skate video I ever watched and some of my most exciting memories as a kid were when we would come to The City on the weekend and my parents would let me skate around Pier 7 or other spots. So my earliest associations with the skateboarding industry or professional skateboarding are paired with SF. With it being so close to my hometown, it was also where some of my friends got mixed up with gnarly drugs and city life experiences and that was a big inspiration for the book—basically asking the question: how does someone go from being relatively comfortable and safe to living a wild life on the streets of the Tenderloin? Pretty much every part of the book and the plot is carried by The City—from the hills, to the skate spots, to the way the TL culture can be so closely connected to street skateboarding because they’re both happening right there in the heart of the city. I feel like that’s so unique to San Francisco. Another big inspiration for the story was this idea that it can be cheaper to live in a hotel in San Francisco than it is to rent an apartment. When we meet Henry, the protagonist, he’s living in a SRO (Single Room Occupancy). Everything he gets into throughout the story happens because of something SF-related. So yeah, I don’t think this is a story that could happen in any other city. 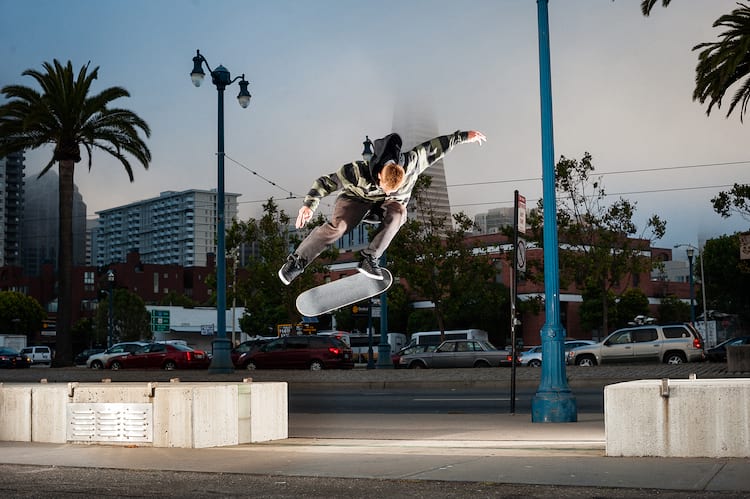 Switch backside flip while Coit Tower disappears into the fog—couldn’t happen in any other city      Photo: Dan Z

You self published this book, but did you ever consider shopping it around to publishing houses?
I submitted the manuscript to a few agents, but I knew it wasn’t likely that it would lead to anything. Literary agents are the gatekeepers to the publishing houses and they get such a high volume of submissions. It’s like being an unknown skater, sending your sponsor-me footage to Nike and hoping they’ll give you a contract. But even crazier, because sending a manuscript isn't a video that someone can watch in five minutes. They actually have to read your work. Being such an unknown person in the literary world, without any connections or publishing history, I kind of knew all along that I was going to end up self-publishing it.

How long did it take to complete this project?
It was basically four years writing it and two years editing it. But there would be big gaps where I’d put it on ice. It was really the majority of 2017 and 2018 that I focused and wrote the majority of it. After I was finished, I showed it to a few friends and family members, and with their notes and feedback I made some major revisions. Those revisions continued until a few months ago.

I was going to ask if you worked with an editor.
Well, the friends and family members I mentioned, they were very helpful and I like to think that they took the form of a single, awesome editor. They offered constructive critiques and based on their notes I took out and changed full sections of the book. Once I felt like it was done, I hired a copy-editor who has worked on novels and she really killed it. I’m super thankful for her, because her edits and clean-up gave me confidence to actually put it out there into the world. 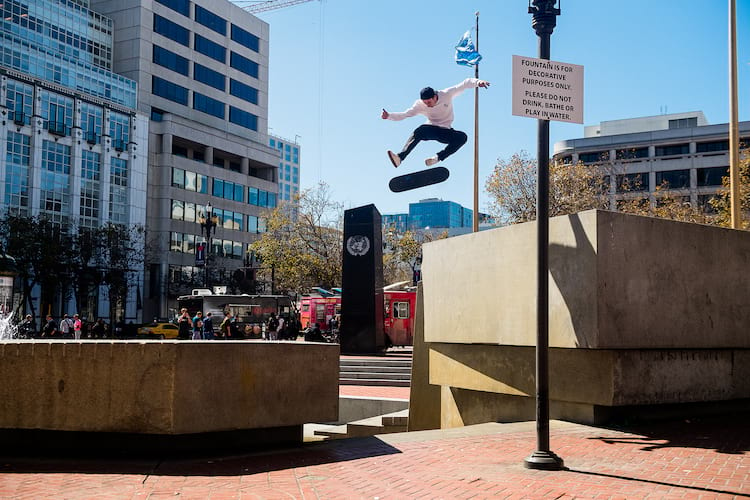 Are you aware of any other books written by skateboarders or novels about skateboarding?
Yeah, there’s a handful out there that I’ve really enjoyed. One of my favorite authors is Nick Hornby, and there's a novel he wrote called Slam that I remember liking. It’s about a troubled teen who talks to Tony Hawk as an imaginary friend. He also wrote High Fidelity and About a Boy, which are wonderful. My favorite novel that involves skateboarding is Michael Christie’s If I Fall, If I Die. It’s about a kid who has been prevented from going outside by his agoraphobic mother and he discovers skateboarding around the same time he discovers the outside world. Michael is an incredible writer and an amazing skateboarder. His part in the Antisocial Video was rad. Evan Schiefelbine also wrote a fun short novel called The Good Fool about a skateboarder. I really enjoyed that, too. I’m still waiting on Burnett to write the world’s best skateboarding novel, though. What I felt was missing from the books that have been written about skateboarding is a depiction of what the professional skateboarding world is like, particularly in the social-media age. My whole life, people have asked me to explain what it means to be a professional skateboarder and it’s really difficult to do. This story isn’t about becoming pro, and I tried to avoid all those sports-story clichés that I think can be so boring and predictable. I hope that through reading a story like this that has the industry as a backdrop, someone might walk away with a better understanding of what it’s like to be in this world.

Do you think skateboarders are going to read this book, or do you have an intended audience for this novel?
I’ve been joking that I think some skaters might buy it, but who knows if they’ll read it. Skateboarders don’t have the reputation for being the most literary bunch. But my goal was to make this a fun, easy read, and since it’s been out I’ve been getting some great feedback from people who read it really fast. I love to hear that. Since my world is skateboarding, and I’m putting it out myself, the initial audience is definitely going to be skateboarders. But I hope it eventually finds its way to an audience of readers outside of skateboarding—that’s the ultimate goal.

It’s cool Sebo Walker did the artwork for the cover. What was that process like?
That process was awesome. I love Sebo’s art and from the first time I saw some of his canvas work I knew I wanted to ask him to do the cover. I had this idea of a hill in San Francisco and that’s kind of all I gave him. We went back and forth a few times on little things, but he pretty much nailed it right away. I sent him a photo of a beer can that had a color scheme that I thought could be cool. And yeah, he killed it. Once we had the front and back cover art, I gave it to my friend Chris Collins—co-founder of Old Friends—who is a great designer and sign painter. I really wanted the titles to have an original lettering. He came up with a few ideas and once he had the one you see on the book it was a done deal. The fact that two of my best friends came together to make the cover makes me so happy. I couldn’t be more psyched on it. 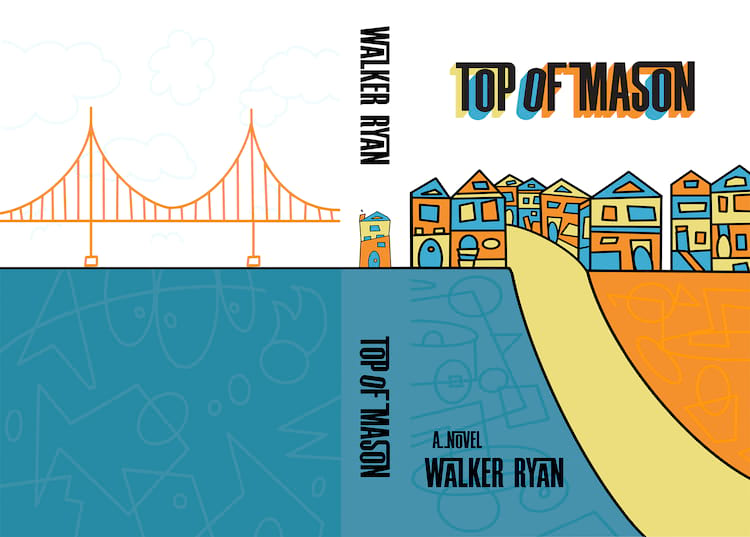 What’s next? Are you working on a new book or do you have ideas for future novels?
I’m excited to see the response to this story. I hope some skaters out there read it and enjoy it. My goal is to get this book in every skateshop, so that’s going to be my next push. And yeah, I have a bunch of stories that I hope to put out, inspired by my experiences in this wild industry of ours. I’m about 80 percent done with another one, but we’ll see how it turns out. But even if nothing happens with that one, I have a few other ideas. But yeah, I just hope to continue filming for a couple different video projects I’ve started working on. We’ll see what the future holds. It’s been a wild year.


If you have any doubts about Walker’s history with SF, peep game, homies