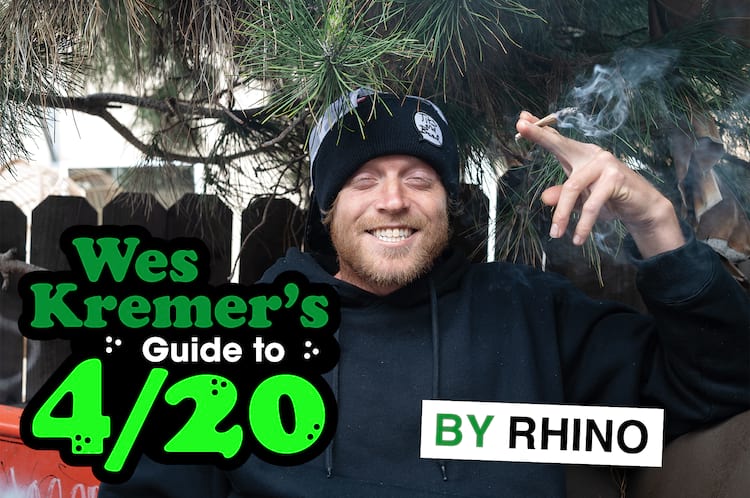 If you’ve ever met Wes, you know he always good for a high-grade spliff and shred session. So with his new part premiering, I figured he’d be down to share some strategies about skating and smoking for the stoner homies out there. Read this, and you’ll be rollin’ like a pro on at least one account. And even if you don’t partake in the toke, his one-liners will still crack you up. Now, manage the banger and enjoy your 4/20 with Wes Kremer.

You have a part coming out on 4/20. Is that a a day that you look forward to as a weed smoker?
Growing up and just starting smoking weed, it was a big deal. We would come in with the heat and roll some proper bangers for the day. As the time passes, it comes up and I still have to carry out the tradition. At the same time it's Figgy’s birthday, so it's going to be a good time.

Do you remember your first time you smoked weed?
I was with a few older kids skating in Carlsbad. I remember ollieing the Carlsbad gap that day. After that we bombed a hill to a shopping mall and were skating some curbs at the loading dock. I rolled up to them huddled up in the corner and asked what was cracking. They had a pipe and some weed and they asked me if I ever smoked before. That was the first time. I remember asking myself, Am I high? 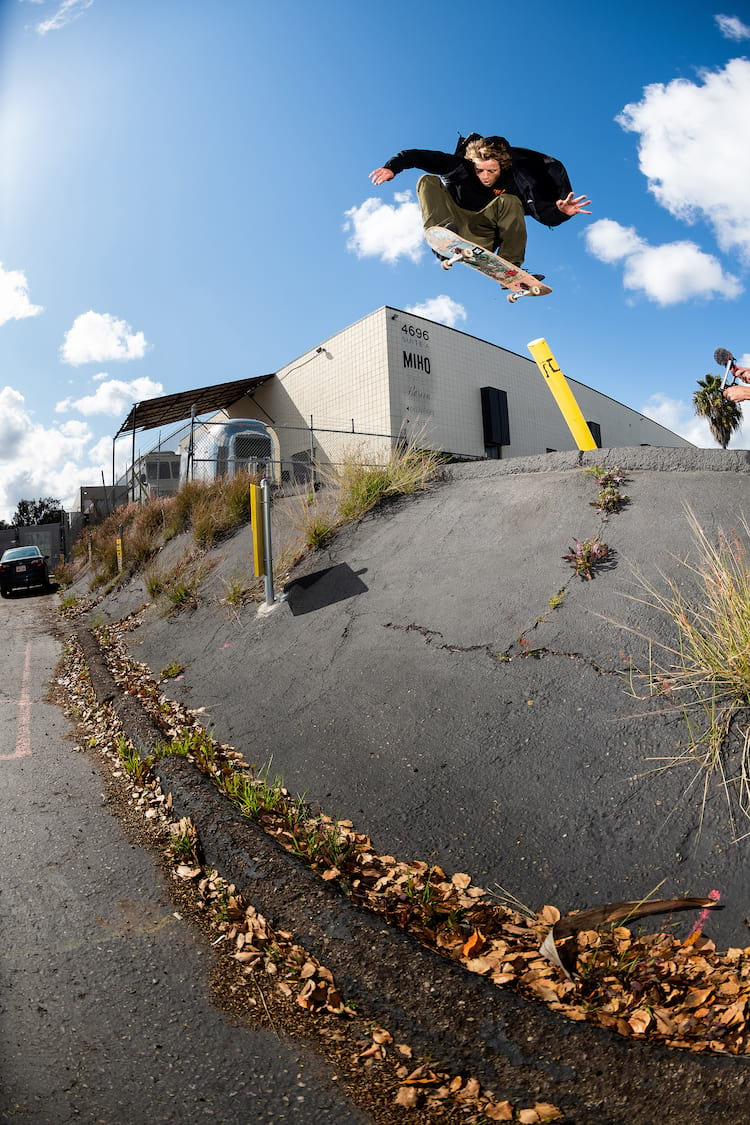 The hangtime off the jam confirms it, he is indeed high

Then you were hooked?
I broke the ice. I went from smoking only on weekends, to nighttime, to just all the time.

What's your process for rolling a spliff?
Mandatory—start with the filter, then break up the tree, throw in some spice, but that’s optional, then roll it in the paper.

The filter is the crutch. What’s the purpose of the crutch?
It's to more or less to keep the joint formed and intact so you save the tree. 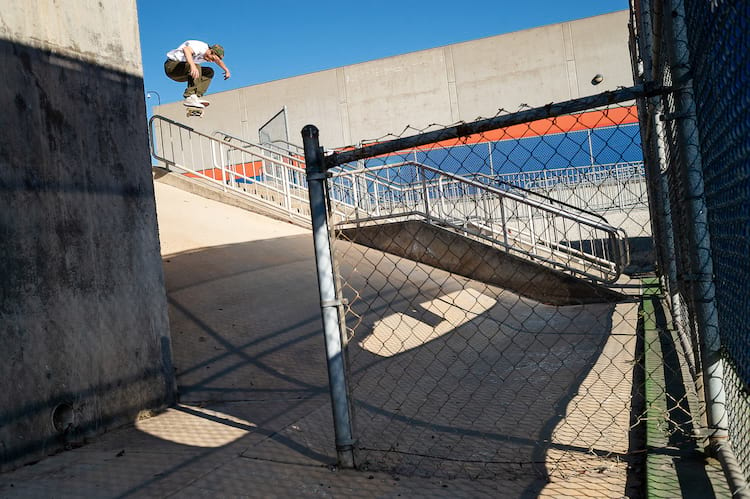 Save the trees; stay in the streets. Wes takes a kickflip over the rail and threads the needle

What's the best thing to use for a crutch if you don’t have any filters?
The best crutch out there is Omar Hassan's foot skin from a blister. We used that on the recent SOTY trip and smoked out of it. If he isn’t around you can use the subscribe card from Thrasher mag. That will work.

Have you ever smoked too much at one time?
Yeah, for sure. What will get me is if I throw in too much tobacco, you get the spicy hit and after a few drinks it hits you harder. If you lay down it will throw you into a whirlwind.

Smoking a bunch of weed all day, do you still the munchies?
Recently I have been getting the munchies. It goes in waves. If there are snacks on deck I will handle them. I try to keep them to a minimal so the munchies don’t take over.

What's your journey with weed been like? Why is it such a staple in your day-to-day activities?
Now it's like I’m more hooked on the tobacco than the weed. I’m just stuck on smoking spliffs. It’s been a wild journey and a good time, not sure what it would be like without it. Probably be more on point. At the moment I like it but eventually there will be a time when I will have to take a break. Your lungs can only take so much. 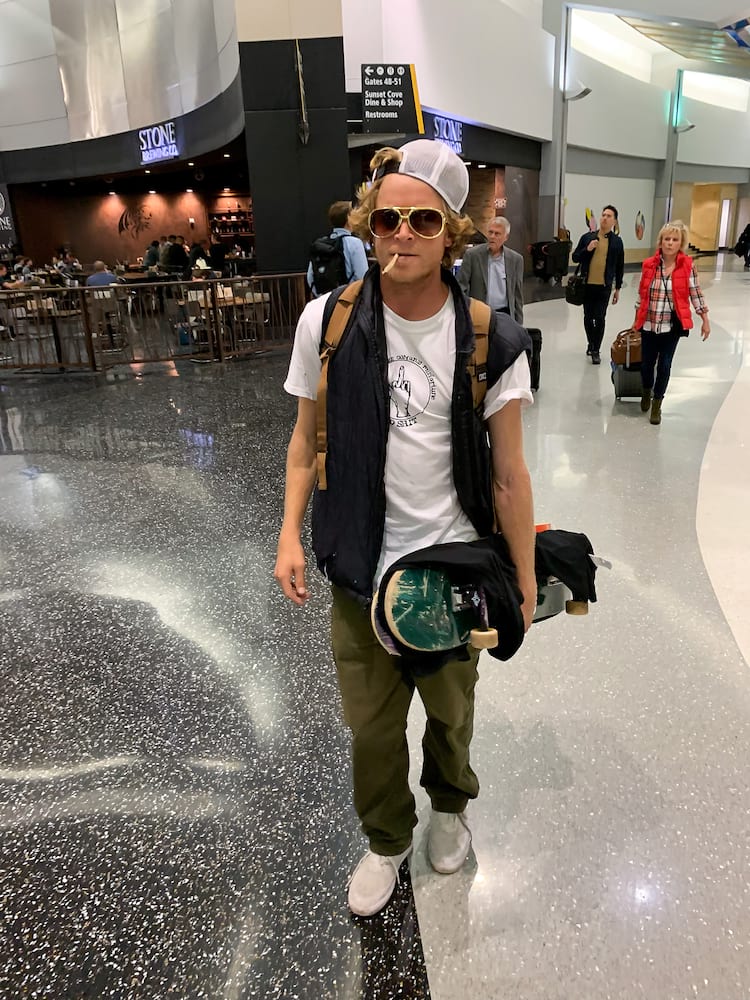 Moderation is the key, right?
Yeah, you don’t want to get too devastated by smoking.

Some people out there think you would be burnt after all these years, but you actually have an insanely accurate memory and also a quick wit. How have you remained sharp?
I am pretty burnt.

Not even. There are some dudes out there who should not be smoking weed at all—they are already zorched. You always seem to be on point.
Different days call for different mindsets. For me, if I’m hyped and smoking a million joints, I can just feel the same hype. As long as your surroundings are giving you the energy, you will be wide awake and alert.  Maybe I have good genes from my parents and that’s what keeps me sharp.

Maybe you have a ton of excess brain cells unlike some other stoners. With smoking weed every day, some people just don’t want to talk when they're stoned.
I don’t want to be too stoned to not hang out and have conversations with the homies. 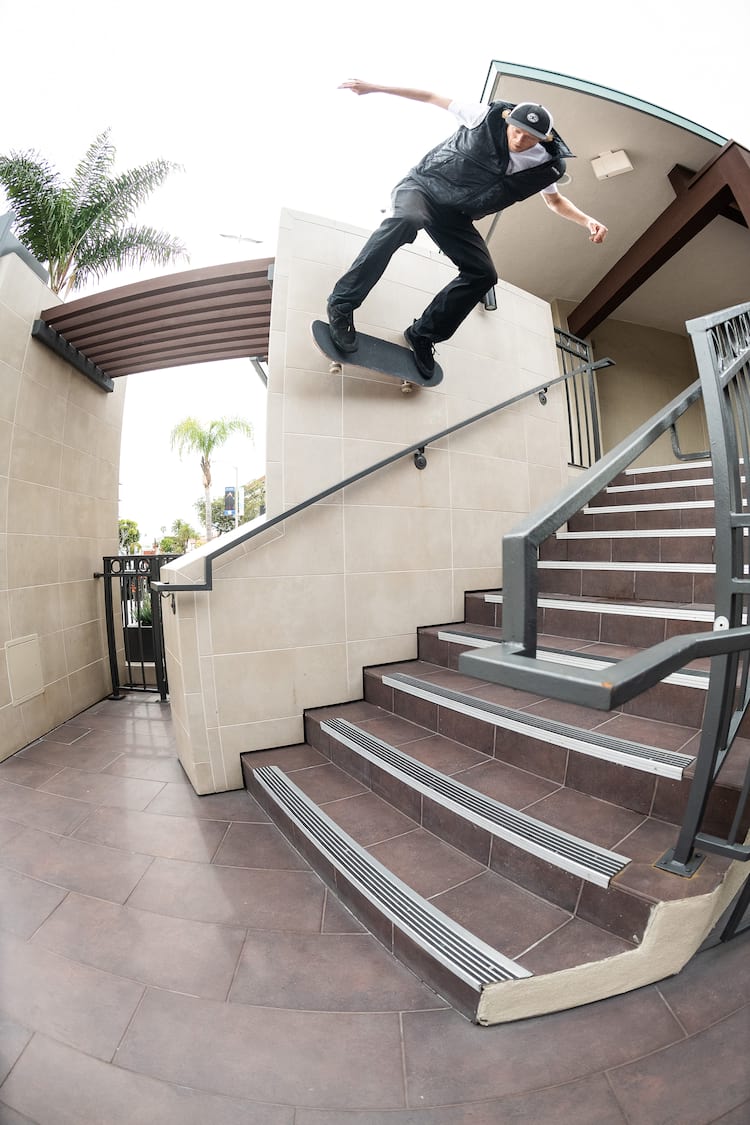 Make sure you bring the board. Never know when you'll find a double-digit wallride

Do you have a weed kit that you bring out skating every day?
It varies but I always forget something—trees, cigs, papers and you can always figure out the filter situation, more or less. The kit also includes a speaker, my flip phone and skateboard.

What’s the rules with weed on trips?  Do you have to share or does everyone buy their own?
If everyone is smoking, it's getting passed around. What goes around comes around. I might have my own bag or on some trips we might have a communal bag for the crew. 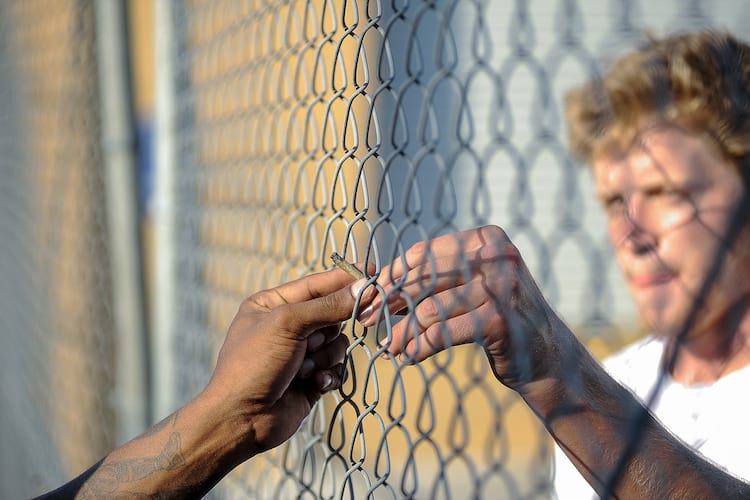 There is always that person who wants to smoke but won’t buy any on the trips.
Oh yeah there is, they will always get called out.

Have you ever been too baked to skate?
Sometimes, yeah. Some days are harder to warm up than others when you’re really baked.

Have you ever shown up to a spot right after smoking and it was something you wanted to skate?
Like I said, some days are better than others. Sometimes you show up to the spot and your body is just ringing. But more or less if it's something I want to skate and everyone is skating, it's not a problem. That happens more with drinking and being too faded if anything. But then again, hype levels from the crew can change that too. 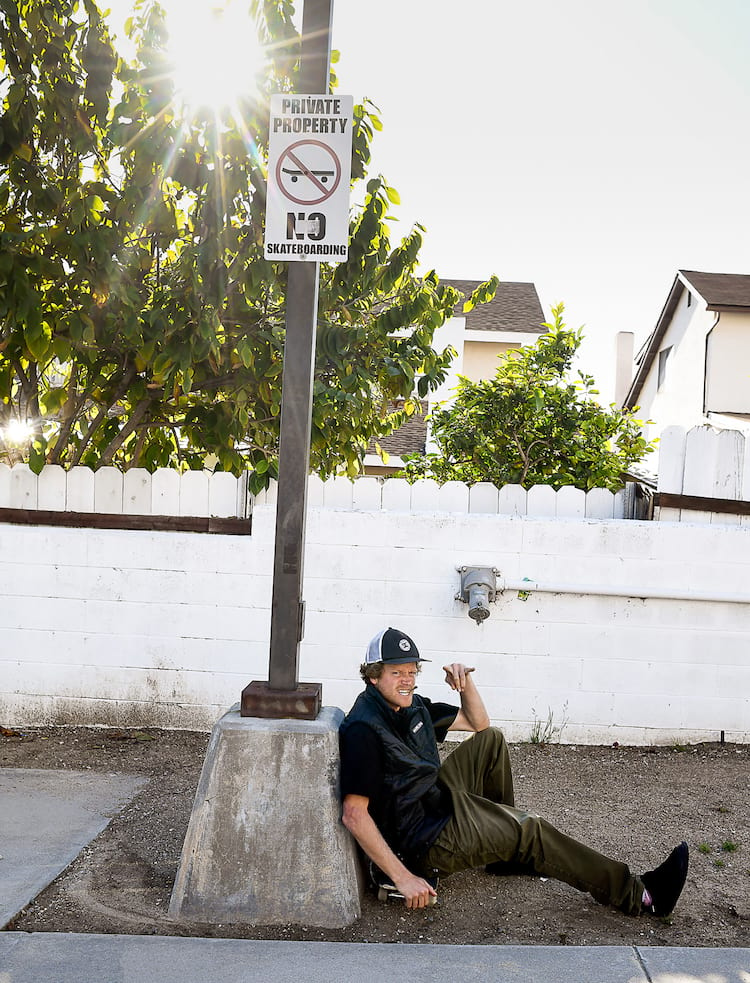 What is “banger management”?
Pretty much managing all that is banging. Could be a hot chick, a spliff, a life hammer—it’s got multiple meanings.

What about when skateboarding?
Just hyping up whoever is handling the trick, ready to have a banger waiting for him when he rolls away. That's managing the banger. 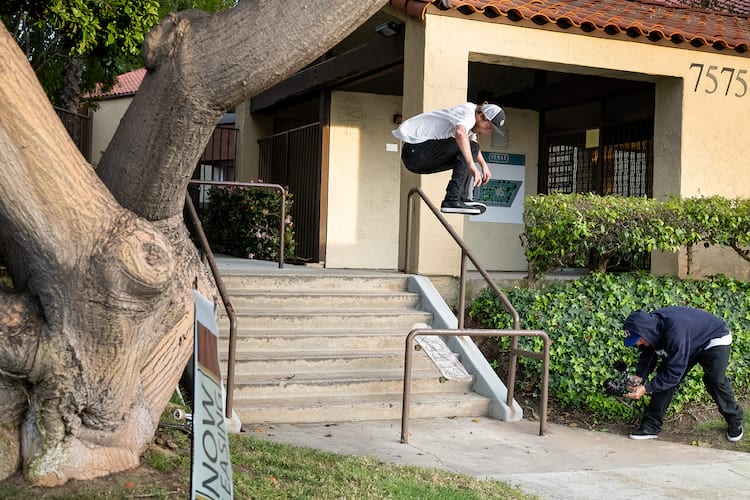 Do you have a weed hook up, or are you paying for it all?
Yeah, here and there, but mainly anything Josh Priebs is involved with. He will hit me up, give me the lowdown and get some trees here and there—perfect.

So you don’t really have to pay for weed?
Oh, yeah I do. Occasionally I get it for free.

Do you go to the weed shops when you need to buy weed?
I’m still hitting up the streets, supporting the homies. 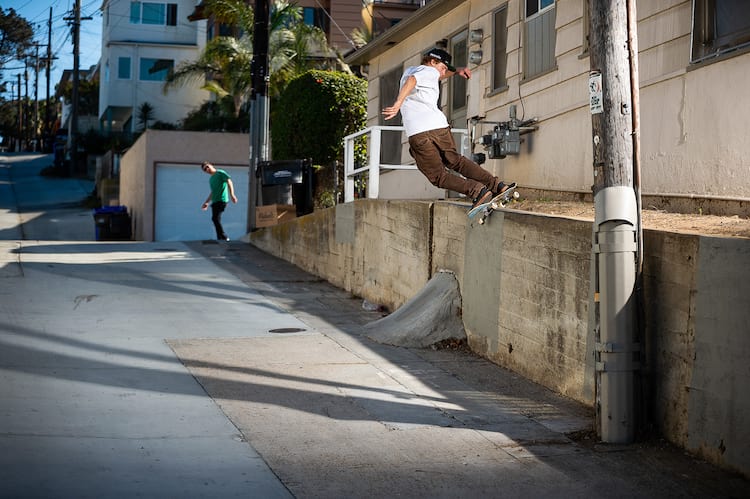 When it comes to the hookup and the hurricanes, Wes prefers the streets

What's up with weed shops?
They just hit you with too much tax, it’s more expensive.

Is buying weed a tax write off?
I guess it can be. I’m still figuring out them taxes.

What's your parents' take on weed?
They know I smoke weed. I got caught when I was 16 years old, showed up at the house after hot boxing the car on the drive home. My dad could smell it on me, he gave me the whole talk and whatever. Basically he said, “When you’re 18, you can make your own choices.” 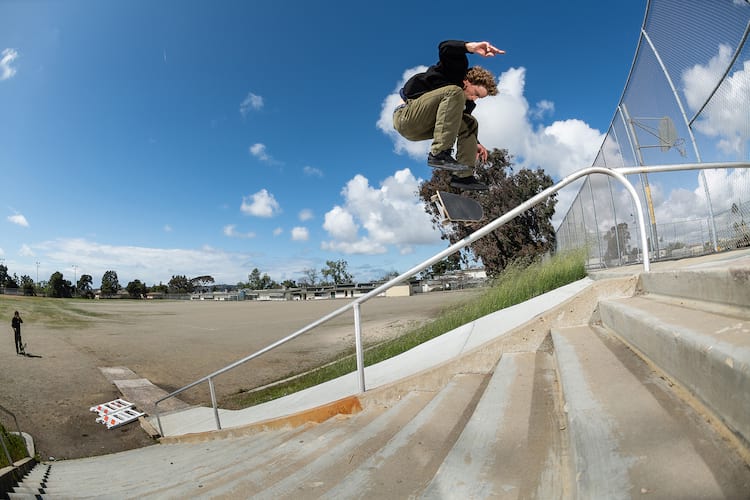 Do you ever show up baked when going over there to visit or for family gatherings?
Thanksgiving dude. A couple Thanksgivings ago I had Madars and some friends over and we all went outside and smoked a few bangers after dinner. It was mellow. They just don’t want me to show up at the house eyes bleeding, wreaking of weed and not being able to communicate. They raised me better than that.

These days it’s legal. Were you stoked when they finally changed the laws?
It’s about time. A lot of people say it would change for the worse. Unfortunately the weed industry is just getting taxed more on it, but on the other hand the people can smoke freely now.

Have you had any run-ins with the law having weed on you?
Yeah, mostly traveling to Arizona. I got a healthy one smoking in France too. I spent about an hour trying to find papers, got them, rolled up a joint and took two hits. Then I got rolled up by undercover cops with all the crew's weed on me. I was handcuffed and everything. Eventually they let me go, so it wasn’t too bad—except they kept the trees.

Do you treat yourself to some of the THC edibles?
Here and there, but I don’t eat too much. They kind of have everything you can think of—cakes, sodas, whatever. 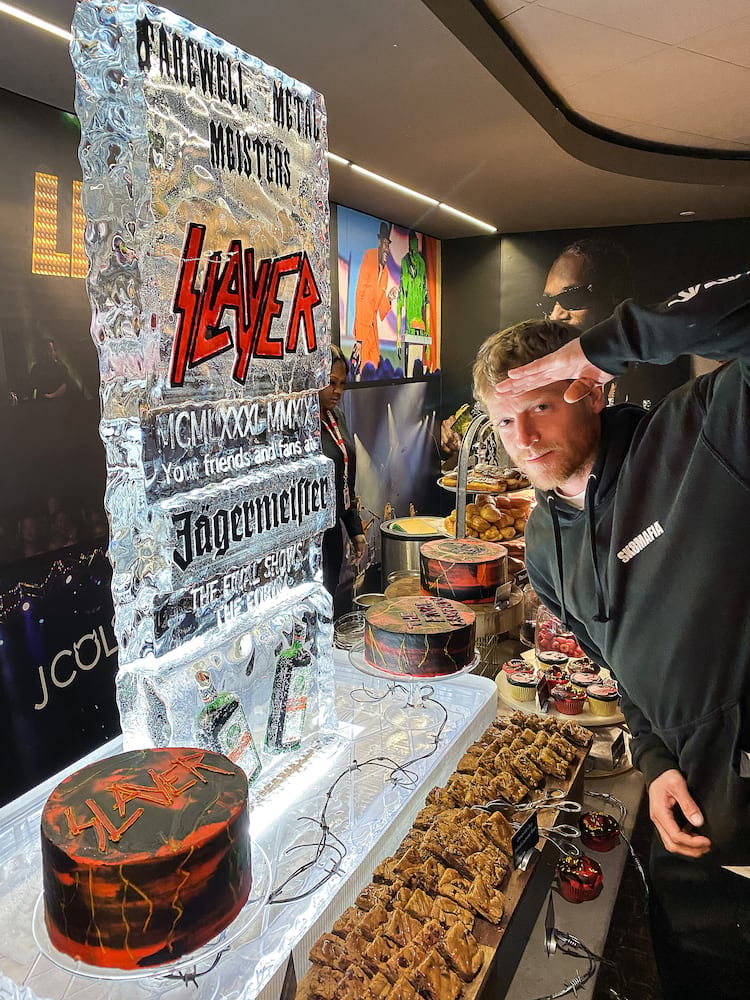 They've got everything now from donut plates to Slayer cakes

Last time you took a rip off a bong?
Whew, it’s been a minute, mate. I want to say, maybe a year? But I will take a rip here and there, pretty much the joints took the place of a bong.

Craziest place you ever lit up in the world?
I would say Machu Picchu.

What about the sketchiest?
I would say those countries where it says death to drug traffickers on the customs card. Then you show up at the airport and the homie at the airport can get you weed. Singapore is like that. It’s wild.  At first nobody wants to get any, then a few days later everyone is like, Hit the homie up. You just have to be careful and if you get caught with it you might not be seen for a little while.

Who rolls the perfect banger?
The Gov’s Marius. Our friend in Spain Pepe smoked one of Marius’s spliffs and was blown away by it. He just kept rolling joints trying to find the perfect combination that Marius rolled. The Governor’s joint, that Finnish spice. Milton Martinez can roll a good one too. 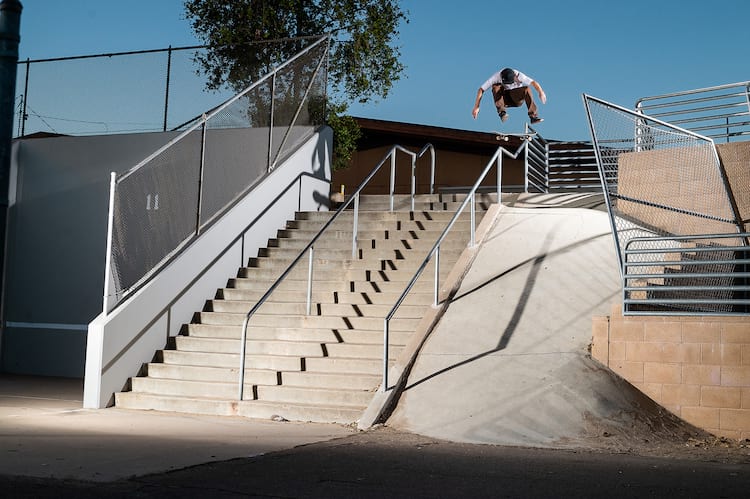 Are you bummed vaping no longer refers to a weed vaporizing?
To the people out there, the weed vaping is whatever. But save yourself from the vaping—you don’t need that in your life. You will get vaporized.

If you did have a perfect day of skating and smoking, what would it look like?
A perfect day for me would be having a tight crew of homies, a bag of weed and in the van driving from spot to spot. Could be anywhere, just enjoying your surroundings.

Do you have a weed card?
No, I never had a medical card.

If you had to pick one or the other for the rest of your life, would it be drinking alcohol or weed?
No brainer—weed, 100 percent. With alcohol you feel the wither on your body in your joints and muscles. It just takes more of a toll on you over the years. More or less a weed hangover won’t keep you from skating, unless you're smoking wax on wax on wax.

Stay on the grind for the crew