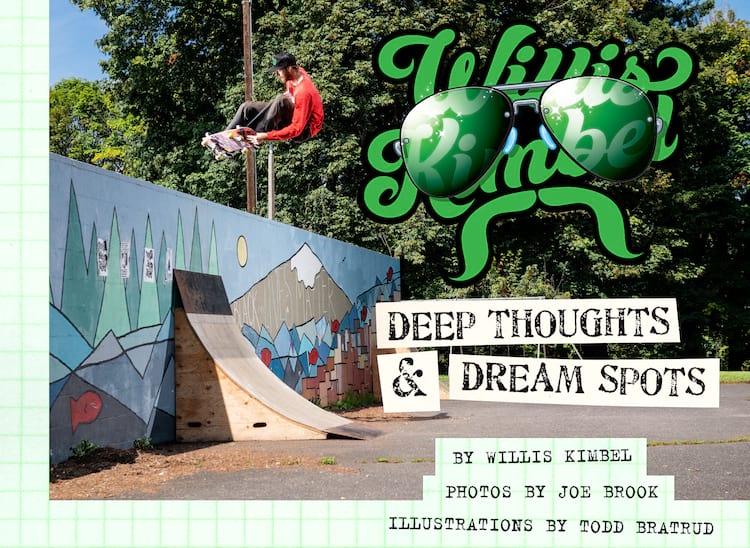 Lien to tail above the mountains and trees. Street spot is a relative term

What follows are thoughts and stories ripped from my journals. Some day after my brain has melted, I will look back on these cherished memories and celebrate them. The world belongs to skateboarders if we want it to.

Choosing a HometownI’ve never had a bonafide hometown so I get the option of choosing one. I chose Portland. You can’t really tell what a place actually has until you leave it. Kinda like traveling by yourself—you realize who you miss when they’re not there. I grew up in Bermuda, Sardinia, Italy, a little bit of Key West, FL, San Diego, Mechanicsville, MD and DC. My parents were not in the military. I hightailed it out to Oregon mainly because Tom Inouye got me a job at Windells as a dishwasher. He made the call and I hit the road. Luckily, I forded the rivers and parried the dysentery straight to the round walls with pool block. My friends let me live on their couch and I worked in a warehouse. I appreciate their patience with me. That was the first time I chose where to live. I can’t stay still for long so I tried to post up in some different places around the world but seemed to keep coming back to the nine months of rain. After enough ups-and-downs, I now know my home is Portland. It’s a struggle, but I’m becoming slightly domesticated. 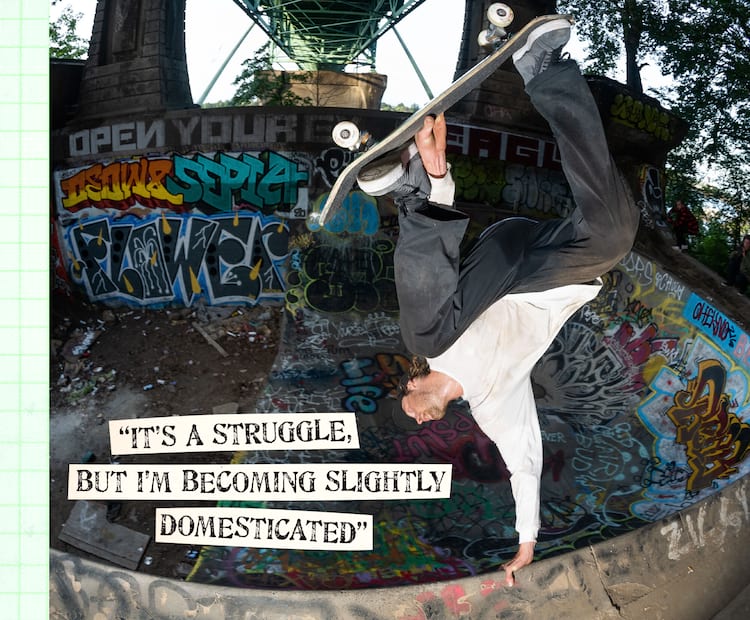 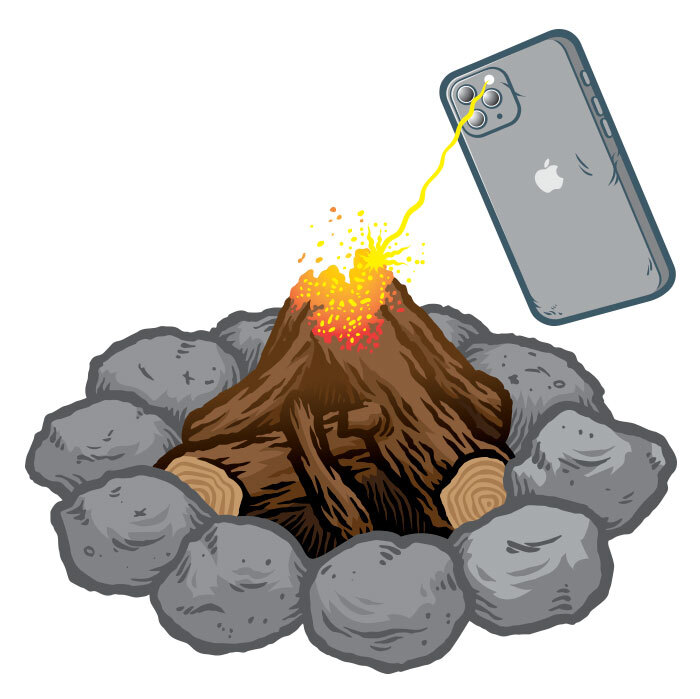 Techniques for Starting Fires in the RainHack at the bottom side of a felled tree for dry wood.
Use your iPhone light. Just hold it really close to the kindling; it’ll go.
If you cut a can into a cup and put gas in it, it burns like an oil lamp and the rain won’t put it out. This is the ultimate if you have the gas. 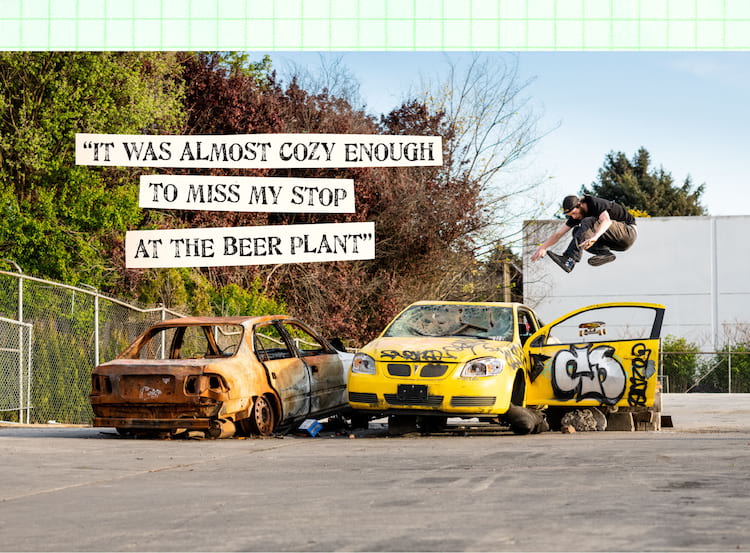 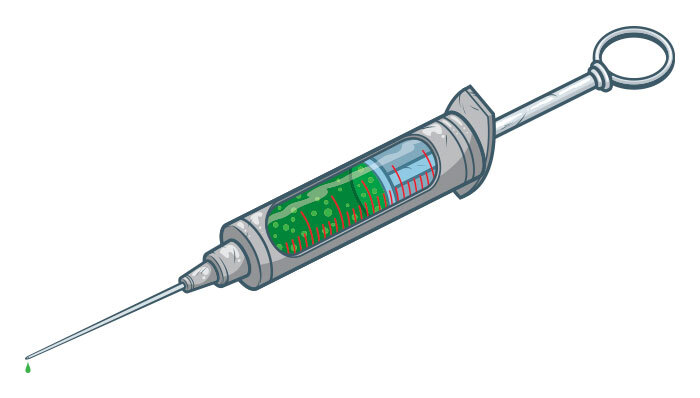 SOILED CENTRAL STATIONI went to Estonia solo; the crew met me there later. I caught a bus out of town to find a DIY that was a car-rim pump bump and a lump. It was very cold. There were some teenagers drinking craft beers, and after claiming that they made the beer themselves, one of them offered me a job. “Catch this bus at 8 AM tomorrow, “ he said. The next morning I got comfy on the hour-long bus ride to who knows where. The bus was rad—probably built in the ’60s and very lounge-like with velvet and curtains everywhere. It was almost cozy enough to miss my stop at the beer plant. The ex-president of Estonia lived across the street from the Põhjala Brewery where they molded me into a beer-labeling hop tester. I quit the next day.

While rolling away from a rail, I fell in some grass full of glass, banging my knee and lacerating my wrist. A new hospital R&D session was underway. There was blood on the handle of the radiology door. The doctor X-rayed my gushing wrist before stitchin’ it up like a drunk fisherman. He offered me vodka. I declined. He muttered something about beer. Two nurses entered. They lifted me out of the wheelchair by my pits and pulled my pants down. Boom! A big ol’ shot in the bum. A commercial-grade syringe full of I don’t even know what rapidly coursed into my hips and down my thighs. I paid in crinkled cash and left the place with one wooden crutch and one kids’ metal crutch. I couldn’t even use ’em—almost threw them away out of frustration.

A few hours later, I was sitting at dinner with an extremely numb lower body (I’m assuming that big ol’ shot had something to do with it). Right as the food came, I felt a sensation that was familiar but different because of the numbness. Add insult to injury, they say. I got a one-way ticket to Soiled Central Station. I had messed my britches badly. I bailed on the food for a shower. Life goes on. 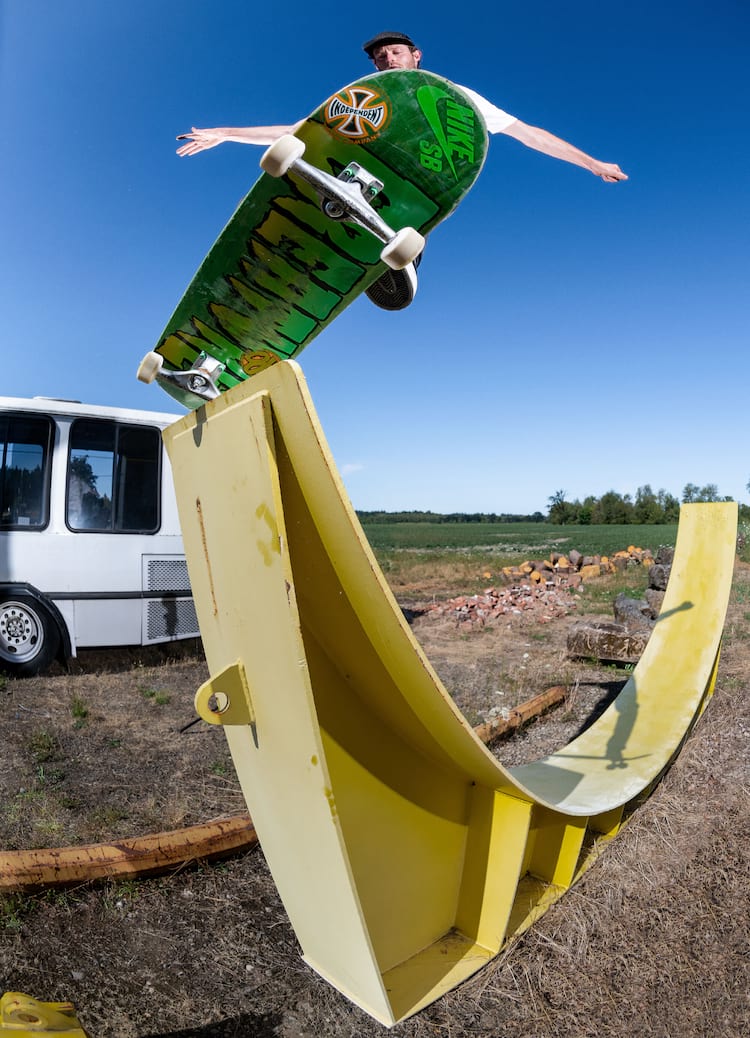 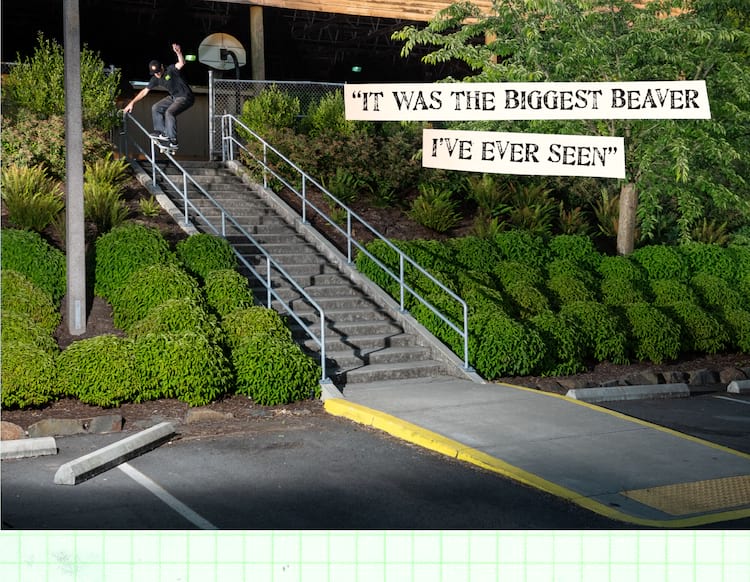 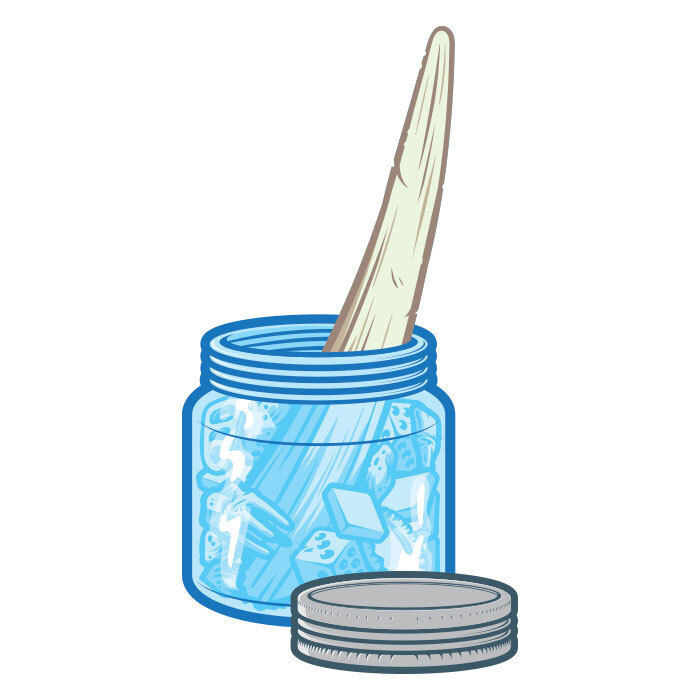 AK is A-OKAYCreature has shown us places we never could have imagined. On a trip to Alaska, John Ponts was filming episodes of Flying Wild Alaska for the Discovery Channel. He flew Al, Adrian, Darren, Sam, Noah and I around from Unalakleet, AK. There are no roads to this rad little village. If you got your medicine or a birthday cake, John brought it. He was flying upside down over the river—like there was a water ceiling. I learned that doing zero gravity drops sends a lot of sand into your eyes and piehole.

The bear alarms (dogs) needed food so we joined a beaver-hunting session. Far up the river that leads into the Norton Sound, an elder was popping off a .22 and skipping bullets on the water like a stone. We had two boats. Sam Hitz and Ponts and I shared a vessel. Sam may have shot a swimming beaver with a luger pistol while on a moving boat from roughly 30 yards away. It was the biggest beaver I’ve ever seen. It was appreciated and used for clothing and dog food. Then the boat stalled on a faster part of the river, very far from the village. Ponts told me to keep my hands on the gas tank in case we needed to make a fire once we hit land to keep the grizzlies off of us. We weaseled out of a little jam and made it back home to Unalakleet and built some sizable quarterpipes with driftwood coping for the children. When we gave the kids some stickers, one ran home and brought me back a walrus tooth. I still have it in my jar of pebbles, coping bits and tiles. So much respect for Unalakleet. 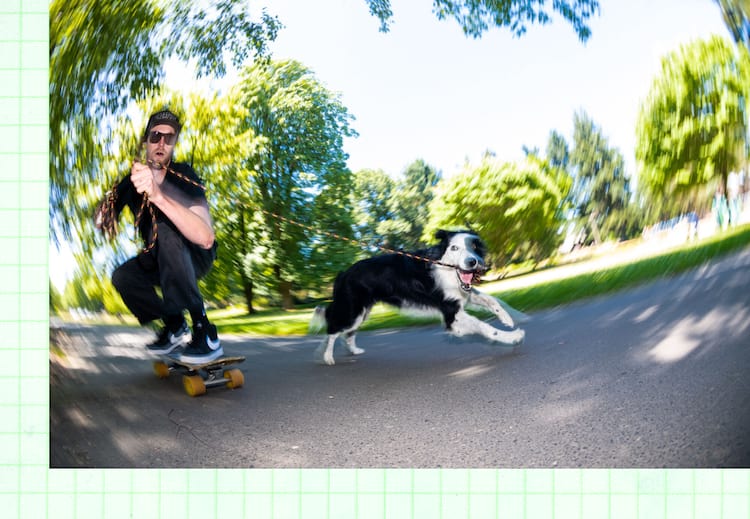 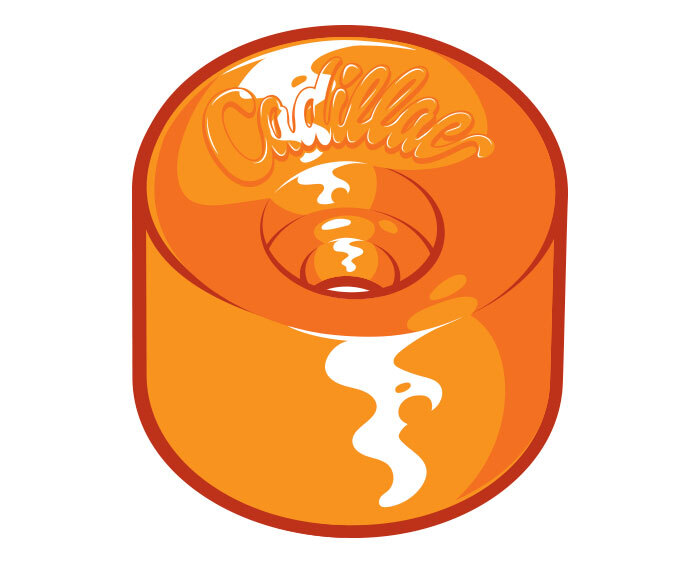 Dream SpotOh, the echo of the fullpipe. This AZ fullpipe my dad always told me about, that’s my dream spot. From the Colorado River to Phoenix there was a mobile manufacturing facility that pumped out these massive pipes. He said they would be in different places every time and that it was the ideal pipe. I still have yet to thruster a ten o’clock in that whopping tube. Tay Hunt would skate them with softies on and never lift his wheels—the wheels back then were insane, though. Frank Nasworthy pumped out Cadillac Wheels and introduced polyurethane to skateboarding. Eventually a law passed making certain blends of urethane illegal due to them being non-biodegradable and the formulas switched. I grew up on them, though. They were amazing. That’s partly why I meander on the big ol’ Thunderjuices.

BRAIN SANITIZATIONLately I’ve been riding a dual-sport dirtbike while looking for spots. Skating, camping and fishing has become a ritual. Just squirtin’ up mountains, making coffee and watching some eagles fly from above. See See Motor Coffee and Beaverton Motorsports got me hyped on the revs again. Thor Drake from See See spawned all sorts of missions and is down for the cause. If you’re on a skate trip through Portland and you need a tow-in, I know a guy and he’s down. I’m well hyped. The combo of dual-sports, skateboards and fishing poles seems to be the most capable mode I can imagine for absorbing the mama naynay. 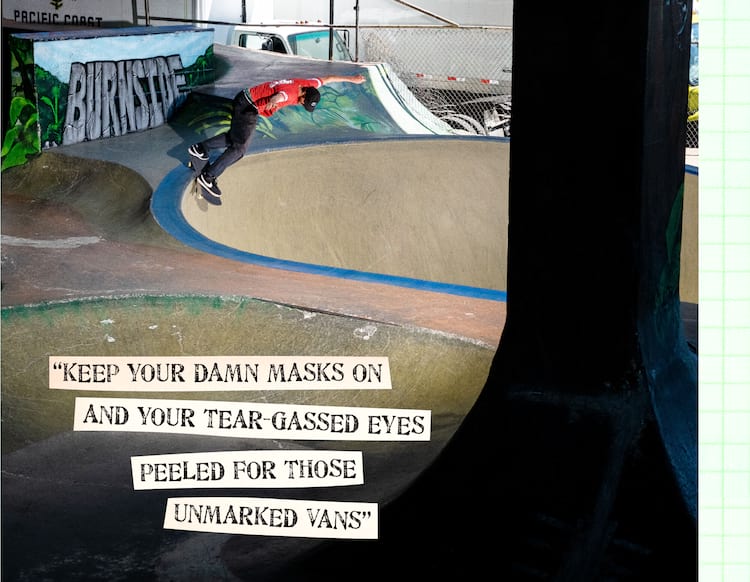 Happy 30th birthday, Burnside. Willis got you a switch back Smith. Hope you didn’t already have one

Riot GearPortland is setting a tone of understandable rebelliousness right now. Protests and riots are still gaining momentum and the federal police are present and refusing to communicate with local authorities. Guns in my face and fires reaching the traffic lights—it’s affecting everyone and I’m sure anyone reading this can relate because it’s happening all over the nation (and the world). A massive new understanding of cultures, history and people in general is going on right now. It’s beautiful, hideous, scary and confusing—but inspiring. Outside of the shocking news that is a daily occurrence, there are so many thoughtful people going out of their way to empathize and help others. They really help. I’ve never seen so much terror in our streets but also so much genuine humanity and respect reflecting all around. Skate spots are a go. Just keep your damn masks on and your tear-gassed eyes peeled for those unmarked vans.

If you had to eat a part of your board what part would it be?A. The hardware
B. Wheels
C. Griptape
D. Bearings

Skiing LessonsMy grandma’s understanding of skateboarding is so rad. She watched my dad’s career and read mags before Thrasher existed. She really gets it. I love sitting with her and looking at skateboarding through her eyes. She’s a brutal critic, too. One time she was watching Street League and said that P-Rod was looking like the guy to beat but wouldn’t be a very good skier because he never turned. 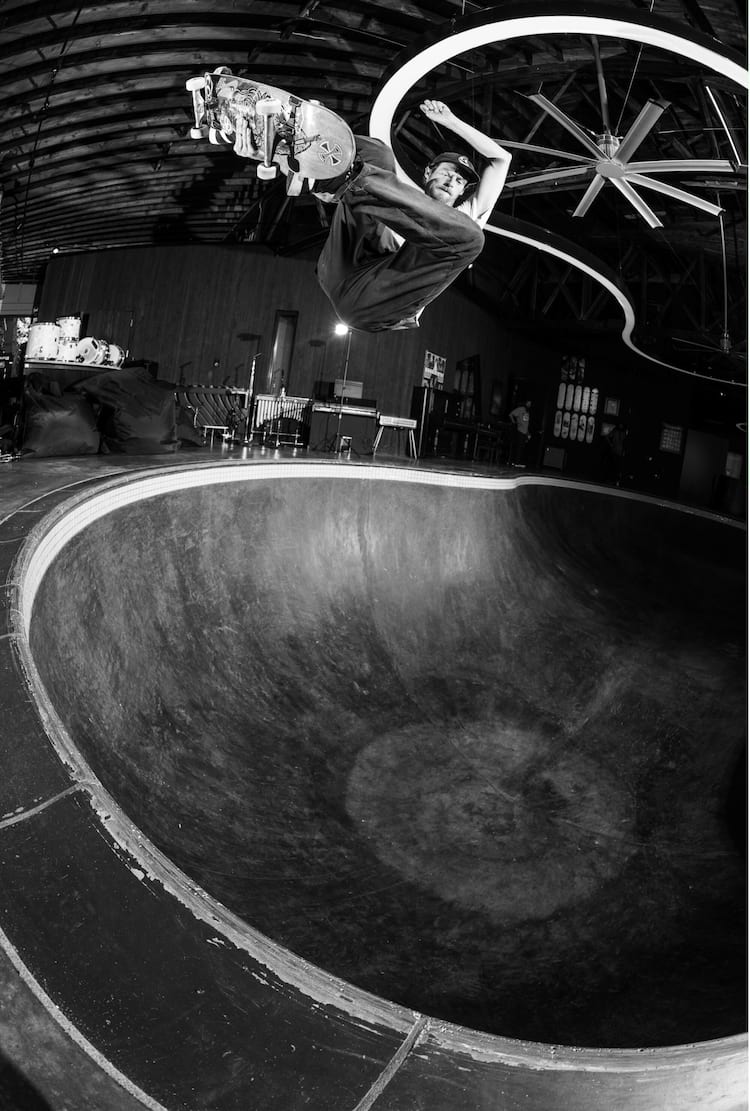