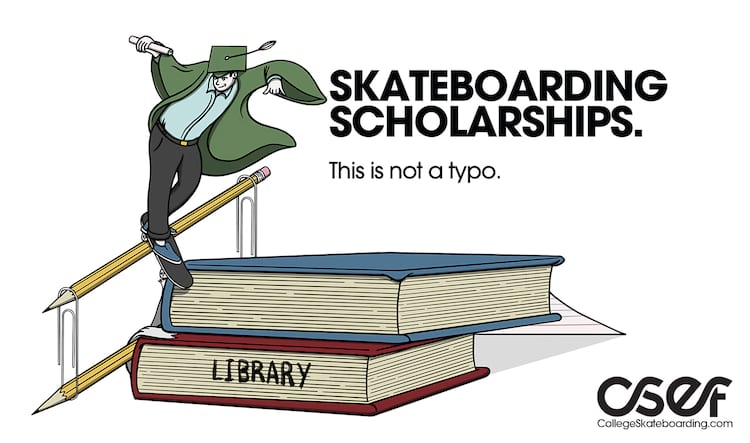 A class of wicked-smart skaters got hooked up with college scholarships from the good people at CSEF. In addition to their already awesome scholarships, CSEF teamed up with Exposure to give $5,000 for women-identifying school-bound rippers. See what it takes to get some extra funds for books and boards. 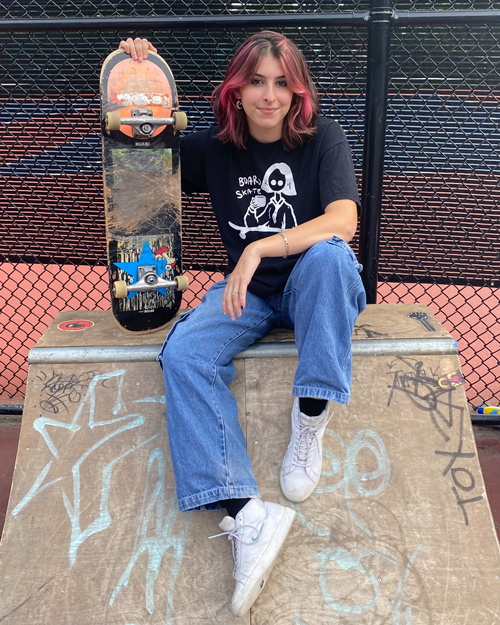 Olivia Leigh KarnyFrom New Jersey to Western PA, Olivia is now a freshman at Carnegie Mellon University. At the intersection of art and business, she will continue to skate and do community work as she’s done by helping the Montclair Mutual Aid Fund and by founding Boardroom Skate, an organization that facilitates women’s skate sessions and builds confidence for its skaters in Montclair, New Jersey. 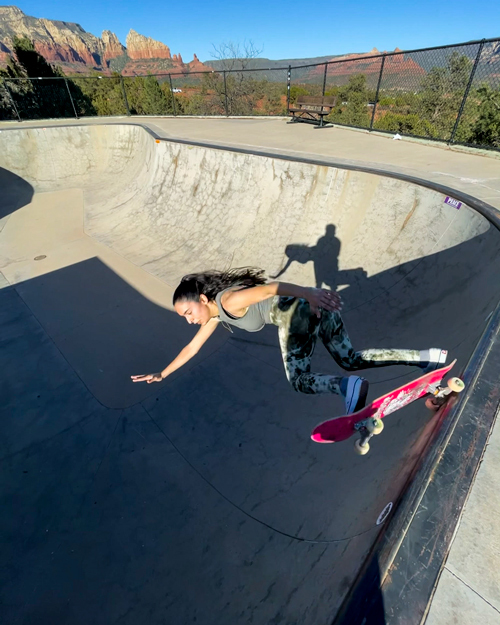 Alexia LomeliAlexia continues on her academic path this year at the University of California at Santa Cruz. As a young immigrant, she was forced to adapt and learn new customs and language, but these challenges were surmountable with the proper motivation and attitude. During tougher times, skateboarding has helped Alexia to manage stress and anxiety, and she is studying psychology to become a marriage and family therapist. 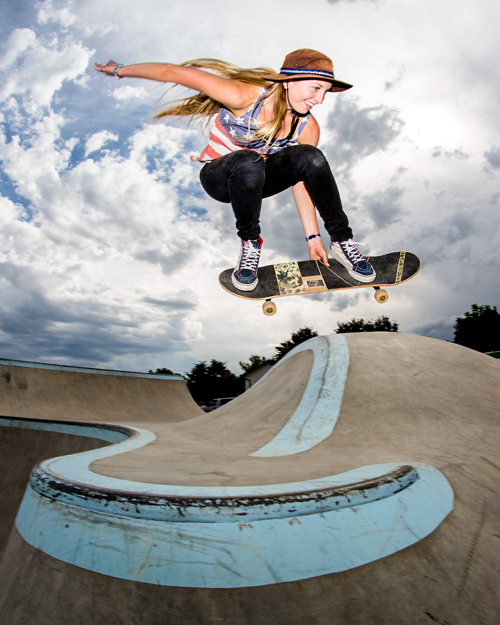 Studying at Touro University in Northern California, Brittney is pursuing a Master of Science in Physician Assistant Studies and Master of Public Health. To help in dealing with significant life struggles, Brittney was both introduced to skateboarding and inspired to work as a physician’s assistant. Skateboarding is therapeutic for her when taking a break from her studies, work and volunteering in Honduras. A proud member of the LGBTQI+ community, Brittney Conrad also rips! 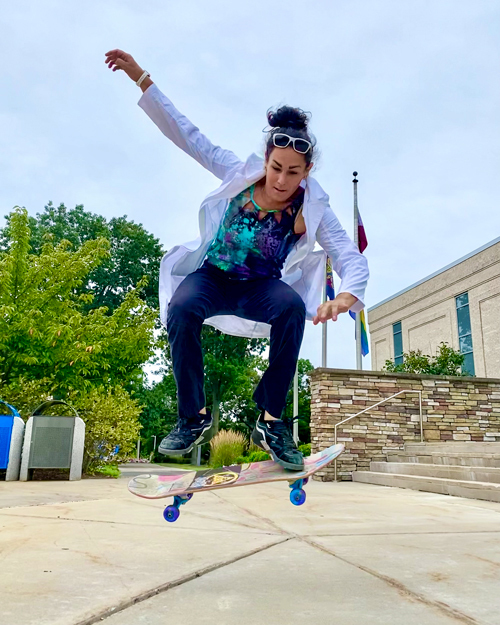 Mattisen is pursuing a career in Biotechnology after finishing her degree in Developmental Biology and Genetics at Penn State University next year. As a full-time student and a new mother, she still makes the time to skate. Mattisen is a queer woman, has been a journalist, a food reviewer, a poet and many other things—a great reminder that every path is unique. 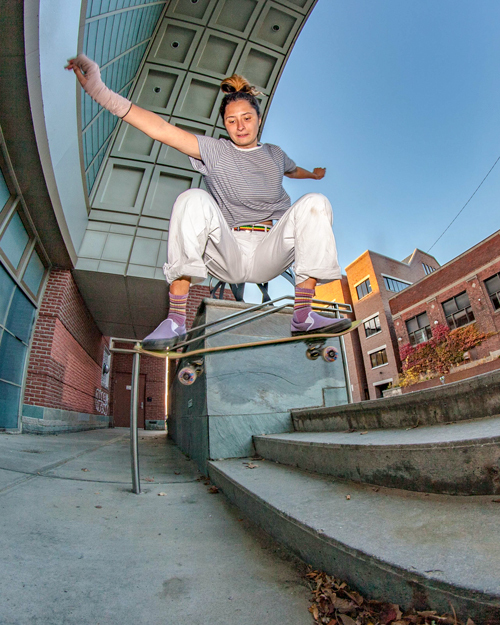 Jennie MullJennie is CSEF’s first ever repeat scholarship recipient and we’re proud to have her back. Once again studying at the University of Vermont, she is still majoring in Environmental Studies but has focused more on writing as her minor and as a way to be a better environmental steward. When she’s not writing, working or skating, Jennie is probably making music or getting a clip for the next Worble video. 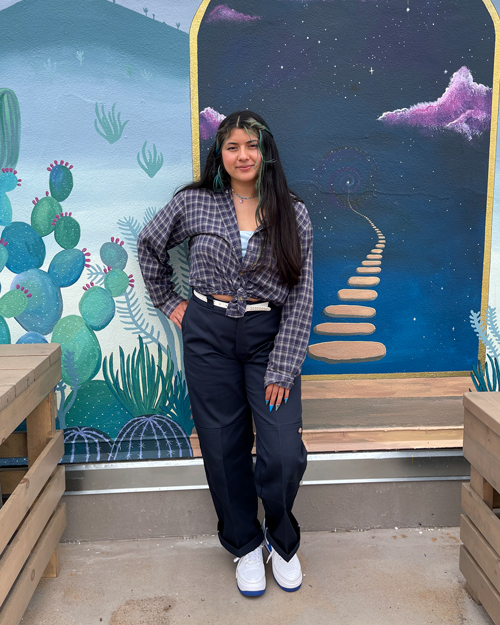 Minelia Adriana SoteloMinelia, like most of our scholarship recipients, is constantly giving back to her communities. She tutored younger students in high school and later on in college with Community House Works. She joined MEChA (Movimiento Estudiantil Chicano de Aztlán), worked with youth to implement high school voter education policies and the list goes on. She is studying at the University of California San Diego to become a school counselor. 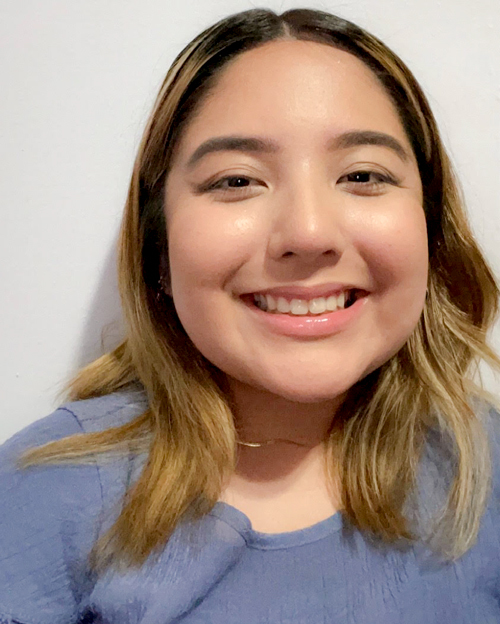 Azucena Paola MoralesAzucena is another freshman this year, studying Zoology at the University of California Santa Barbara. Her love and fascination around animals began with a turtle her parents gifted to her at a young age. Skateboarding is a throughline that helps her to build toughness and meet her goals when taking breaks from her studies. In high school, Azucena championed a program to increase recycling, encourage students to use reusable water bottles, allow teachers to have more recycling bins in their classrooms and have the cafeteria use utensil dispensers to reduce waste. We’re stoked to see her continue her great work at UCSB. 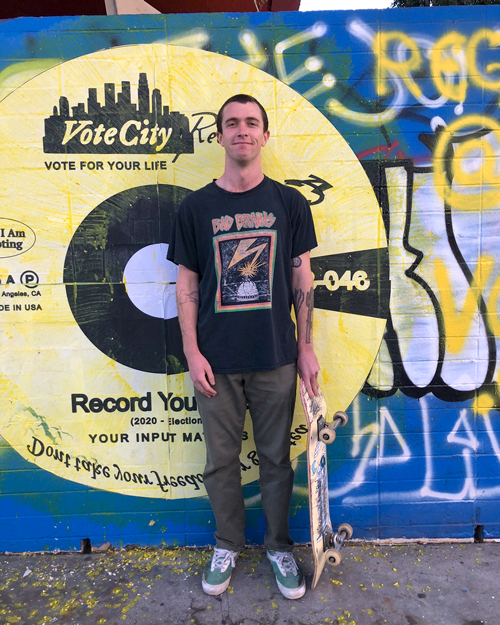 Chris GiamarinoAfter earning his bachelor’s and master's degrees at New York University and Columbia in New York, Chris is working toward his PhD in Urban Planning at the University of California Los Angeles. Much of his work has focused on how architecture and public space design excludes skateboarders and houseless people and how that could change. While he works toward his degree, he has presented some of his research at Pushing Boarders in Sweden and plans to pursue a career in academia. Give it up for skaters helping skaters through policy. 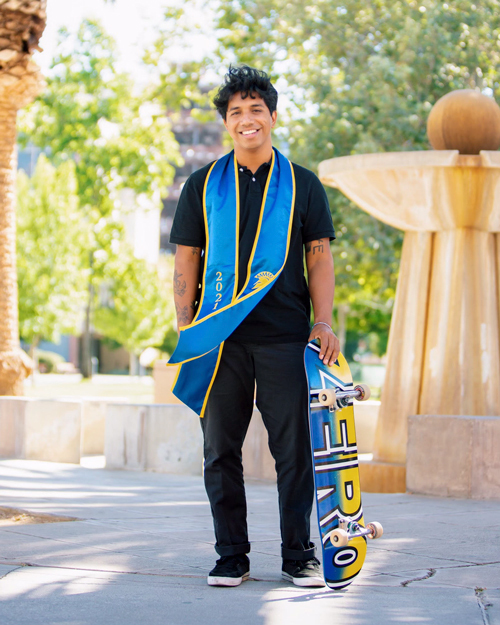 Zane SamarasingheZane recently graduated with his bachelor's degree from San Jose State University and will continue at SJSU to pursue his master’s. Inspired by his mother, his studies are preparing him to become a special education teacher. In addition to academic awards and accolades, Zane founded a nonprofit called The Skate Connection which promotes inclusion for children with disabilities through skateboarding. We’re sure lots of great things will happen because of Zane’s work. 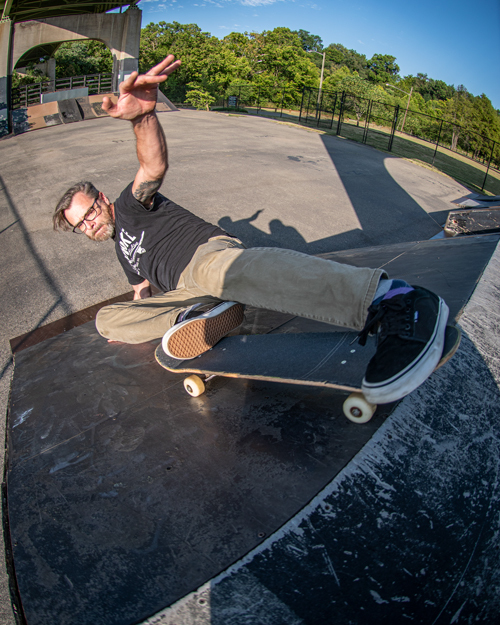 Jason D. GarnettJason is studying Sociology at Averett University in Danville, Virginia. Using his education, he aims to work in the field of ethics in artificial intelligence. This father of two was introduced to skateboarding when watching Gleaming the Cube, and he continues to consistently skate while running the Roanoke Skatepark Initiative. Timing is key, and it's never too late to get an education. Jason is focused on understanding how workplaces and cultures change the needs for labor and the workforce. We look forward to following his path. 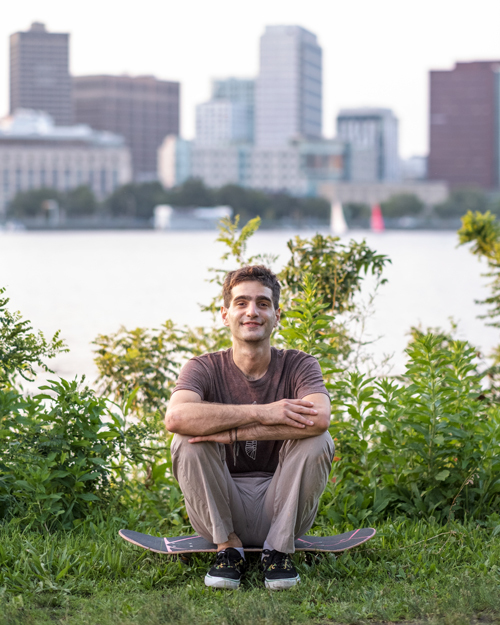 Eric Samir FayadEric was born and raised in Lebanon. He fell in love with skateboarding there after he received his first legitimate board from a family member who had traveled to Dubai. Later he was brought to the U.S. to pursue his education. Eric is getting his master’s in data information and visualization design. With much volunteer experience under his belt, he hopes to continue working with museums, educational institutions and nonprofits. He also plans to keep skating around his home at Northeastern University! 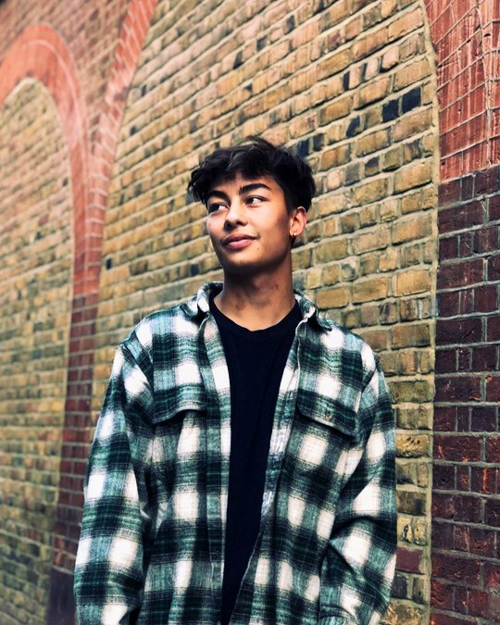 Braedon SilversBraedon Silvers overcame many hurdles to be studying at Stanford University. With goals to become a UX designer or a product manager, he is working toward his Master in Computer Science with a focus on human-computer interaction. After many experiences, including as a caretaker to special needs folks, he is the CPO at Develop For Good, a nonprofit he co-founded with his fellow student friends while at Stanford. Still making time to skate while maintaining a 3.8 GPA shows Braedon’s incredible work ethic and grit. 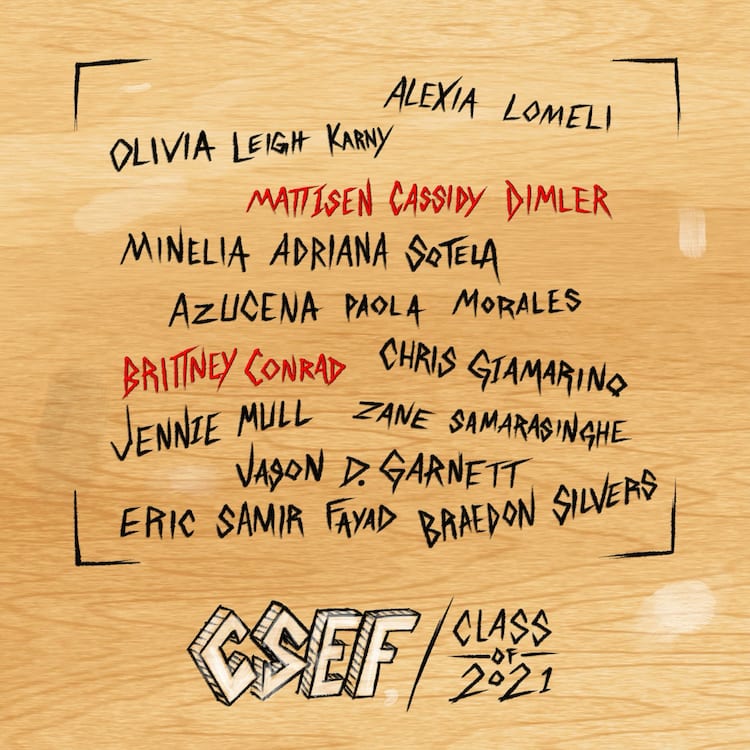 The College Skateboarding Educational Foundation provides a brand new opportunity for skateboarders to build better futures for themselves. Regardless of financial assets or personal networks, everyone deserves a chance at pursuing a college education. Skateboarders are no exception. Through CSEF’s scholarship fund, skateboarders all over the country will be given essential assistance with completing their goals in school and in life.
© 1981–2022 High Speed Productions, Inc.