A Skateboarder's Guide to the Internet 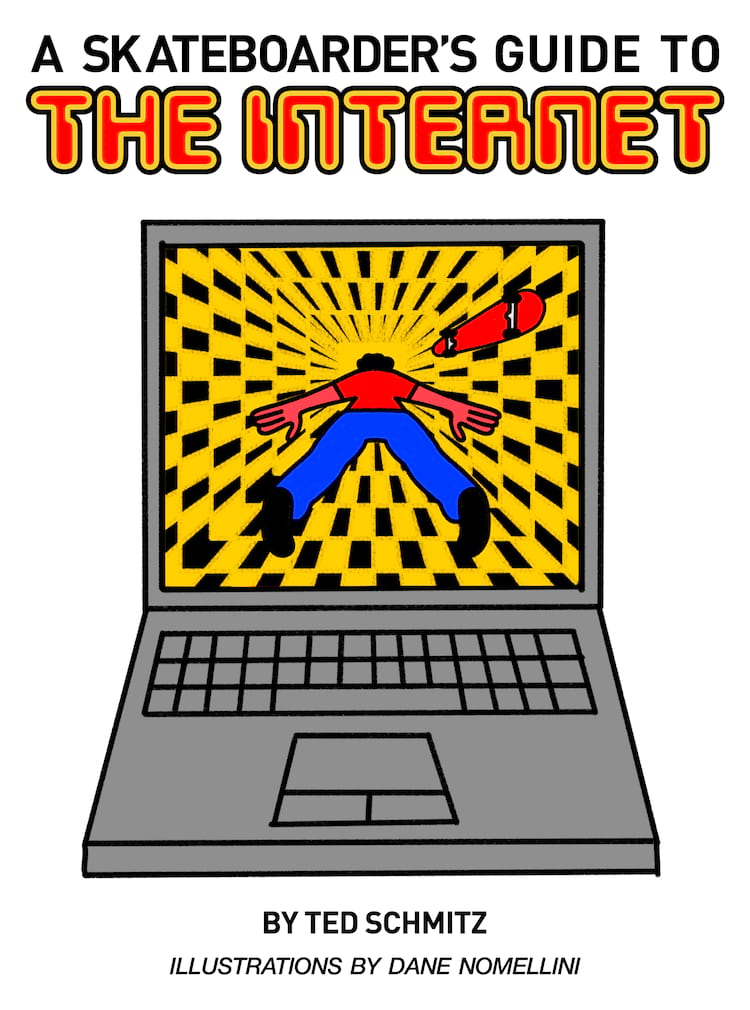 I’m a skateboarder and I grew up on the internet, from AIM to Livejournal, Xanga, Myspace, Facebook, Wordpress, Tumblr, and now to Instagram, Twitter and a few sad swipes on TikTok. What I’ve learned from downloading CKY2K on Kazaa and fighting through a labyrinth of shit-post infested forums, is that the Internet can be a tool for connecting the global skate scene, but also a digital landfill of life-sucking toxic sludge or worse—old ‘90s videos where the sound is out of sync. If you want to be successful with your online habits, just take my arthritic mouse-clicking hand and you’ll be fine. You won’t have any memory or ability to understand anything about reality, but still fine. 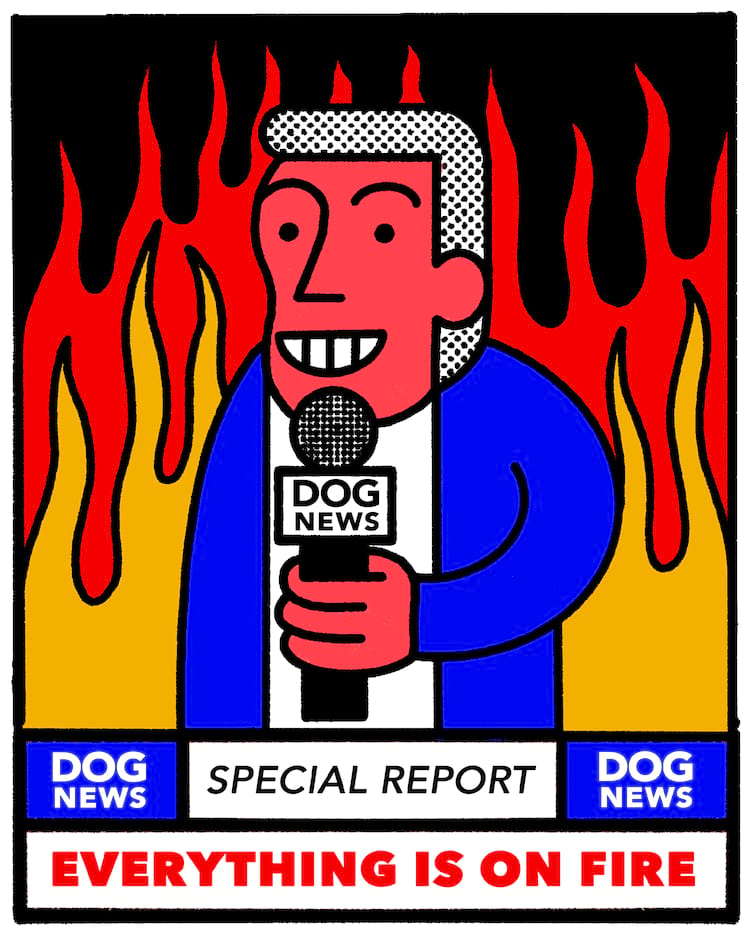 First let’s start with the worst stuff—the news. As a skater it’s your responsibility to be aware of the goings on in the world. You don’t want to plan a trip to Orcas, only to find out the ferries are on lockdown, meaning you gotta go wait out the winter stuck in the boring parts of an Antihero video. So open your browser and Google  “news,” then immediately cover your eyes with one hand and throw your laptop to the floor with the other. Chances are you’ll catch enough headline letters on the flying screen to see that a lot of people died, Trump called their corpses ugly and that someone with your last name is canceled. Pat yourself on the back; you’re now an informed citizen.

Now that your computer is yet another casualty of online war, let’s break out those phones to look at some skate websites. I’ll make it easy—go with thrashermagazine.com. As I’ve heard some cool-ass Zillenials say, "You already know what the fuck goin’ on." There’s Grant Taylor photos and videos on this website. And, yeah, Ishod is there too. Honestly, to avoid any further kook-induced trauma, just stay put, never leave and maybe flood the comments with your awful SOTY takes—Oh really? Dude with one part who couldn’t shoot an interview should get it? Good pick, dick. Sorry, let’s keep going. 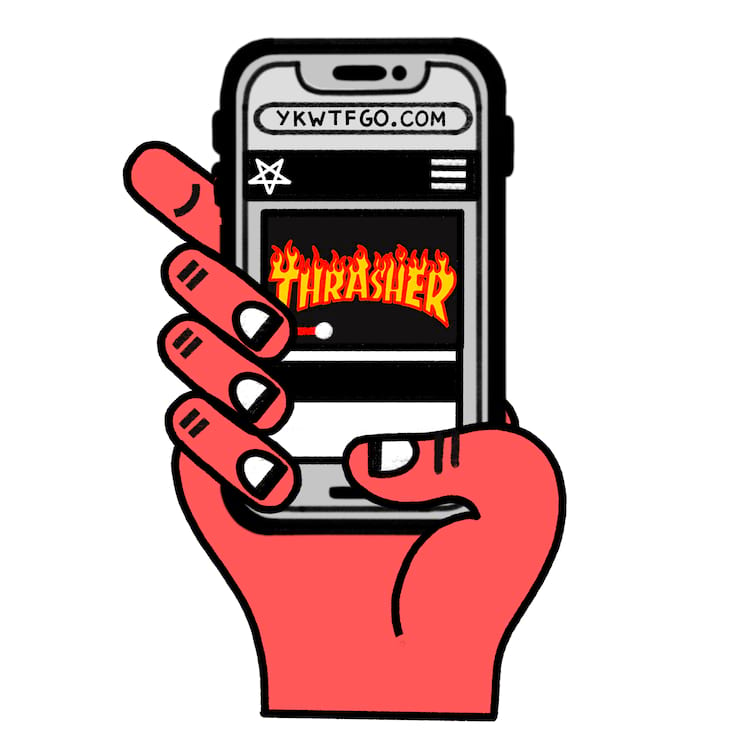 Skateboarding.com
I used to confuse this with Skateboard.com, which, the last time I checked it in 1999, was the Tum Yeto website. Look at those awesome Zero hoodies!

Jenkemmag.com
Their “mags” are actually books, which are basically the opposite of the Internet, but you can go to their site if you want to learn more about New York skaters’ pants.

Quartersnacks.com
I almost went to this website, but opted not to because they put a Jake Johnson clip as number four on their weekly top-ten Instagram post. I think they're also bought by Big Pants.

FreeSkateMag.com
A home for European skateboarding that doesn't lie about being a magazine. I can't spend much time on this site without feeling like an uncultured moron, though. Go here to work on the accent you lied about having in your Tinder bio, or if you just want to hate yourself like I do.

Slap Message Boards
This one sits somewhere between a website, social media and an industrial-waste-plant leak. In its glory days you could get direct downloads of leaked full-lengths from the mods. Now that most vids are free or hosted somewhere online, it mostly maintains as the skate world’s rumor mill and safe haven for some serious “cringe.” It’s a fairly old method of online communication which makes posts show up in a more chaotic fashion than a reply-all email chain. Puleo and Gino’s push were once the most revered figures on the message boards but who knows what aesthetically cohesive East Coaster rules over them now. Best to be avoided, but If you do find your way on there, could you ask them to exercise a little more care and empathy for their fellow skaters? Calls for civility and generosity go over really well on the Internet.

My notes say there’s also another website for an indoor skatepark where people just skate flat. I tried to look into this more, but Google keeps asking me if I meant to type “the berries.”

Honestly the website game isn’t what it used to be and quality web logs are also harder to come by these days, but let me just tell you that Boil the Ocean is still writing and the Chromeball archive is always worth a browse. Unfortunately, this exercise requires a lot of reading and you’re about to use all your remaining brain power on the rest of this piece. Don’t stop now; let’s juice the rest of those fading cells.

For those who haven’t seen the evolution of the internet in real time, social media was invented sometime around 2013 when I got a refurbished iPhone 5s from my brother. And for the most part, it was just bad pictures of old cars and food, but then the apps started adding video features and the world basically exploded. We’re still dealing with the fallout from the nuclear IG-Vine blast, and it looks like only Wes Kremer and Jake Johnson are going to survive. Let’s just go over what all these day-ruining, screen-timer-defying soul suckers have to offer before the sun eats us.

Facebook
If you’re an old-deck collector or guy who likes to rant about the youths ruining skateboarding, you’ll fit right in. You can also find your uncle on here—not sure if that’s a good thing.

Instagram
When it comes to blending skateboarding and the Internet, no social network has gamed it and changed it quite like Instagram. After ushering a new democratic age of circus tricks, fake pros and an entire generation of skatepark skaters scared of the streets, the ‘Gram is for worse, where you will spend more time than skating by a ratio of about 16:1. You can try to leave, but the feeling of not knowing who was warming up at El Sereno will get you back. There is no escape. The best you can do is try and copy my perfectly curated feed of curb moves, dog pics and enough political spam to get you on an FBI watchlist. 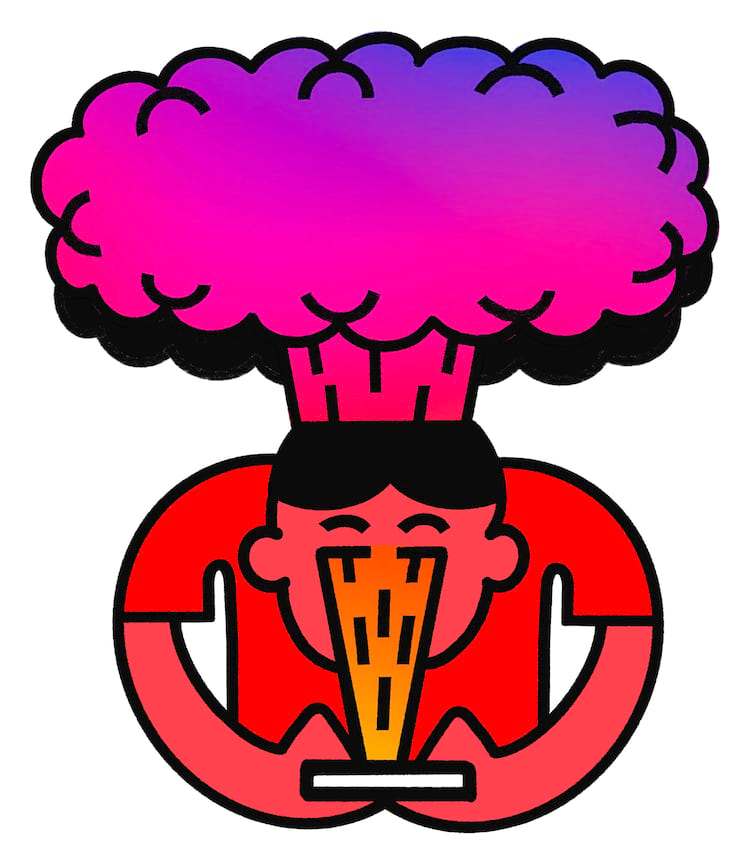 Twitter
This app should also be avoided almost entirely, and not just because one of the top-three worst dudes of all time sucks all the oxygen out of the room. It’s that the most fanatical skaters on there dominate the discourse and waste precious hours of would-be skate time arguing about what your griptape preference says about your personality, if permission plazas count as park footy and also, sadly, pants.

TikTok
We must address the elephant in the bowl. TikTok is hands-down the most confusing and frenetically evil app on this list. Every second you’re on it feels like you’re about to taste copper and pass out, but you just keep staring as 11 turns to midnight and midnight turns to 5am when the sun reminds you that only fresh horrors and thirst-trapping lip-sync vids await your next cursed day in this nightmare year. TikTok, much like Instagram, is a permanent flood of people hopping on the newest trends desperate for influencer cred, but what makes this emerging platform so disorienting is that it is dominated by 15-second tutorials on ollies and kickturns.

The Good:
Many marginalized skaters with smaller followings on the ‘Gram are finding an audience and fans for their skating in an authentically stoked environment.

The Bad:
Someone told the YouTubers about this app.

Obviously, your eyes can only take so much. That’s where the podcast comes in to annihilate any remaining time with your own thoughts. The skate pod game is still relatively small, but it’s growing. And since they’re so fucking long, it’s important you don’t get stuck halfway through a five-hour Mike V interview wondering where you went wrong in life. Here’s the rundown.

The Nine Club
Basically the Joe Rogan Experience of skate pods—three dudes with varied degrees of influence in the industry will ask your favorite skater when they got their first board. The answer is usually, “Back then, when it was different.” 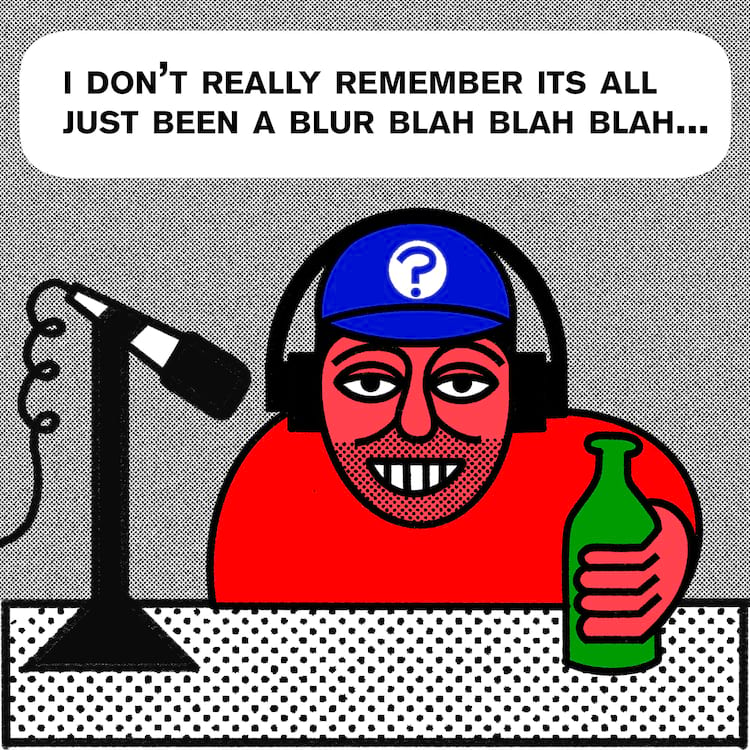 The Tim O’Connor Show
I think he stopped doing these? Honestly, I’m kinda scared to check.

Thrasher Radio
Jake’s archive is still accessible and always a good listen. Frank and Schmitty are keeping the show going, talking to up-and-comers and legends alike about sketchy trips or some toilet-related tangent.

Talkin’ Schmitt
Our resident pod god works double time, collecting stories of our culture’s committed heroes from the ‘80s, ‘90s and whatever you call this era.

The Bunt
Two Canadian guys ask their guests about old video parts, whether or not they know Wade DesArmo and then sports for some reason.

Mostly Skateboarding
Blog gone pod, writers from skate publications past and present talk the part of the week and fan out on Venture trucks.

Vent City
Ryan Lay, Kristin Ebeling, Ted Barrow and a panel of smarty pants attempt to discuss the big things in life and skating. Too “woke” for many, who are frankly easily triggered when hearing stuff like, “Maybe don’t ollie over people who don’t have homes, dick.”

The Stream
There hasn’t been much discussion of YouTube, simply because I was watching it the whole time I was writing this and I was mad at it. I accidentally clicked on some video about a glass skateboard and was caught in the autoplay stream, coursing through rapids of even more foreign clickbait videos with people walking around and bailing nollie flips at Fort Miley. The stream can also be a source of goodness, it just depends where you start. Sometimes you watch a Rough Cut of Gustav Tønnesen and end up two hours later watching Verso with your homies. But as a rule, be selective with your clicks or you’ll succumb to the stream.

Arguing with people
You will miss your session and any remaining humanity if you try to challenge some dude going by @brokeside_lip saying Pontus Alv invented the wallie. Just let him have it. He’s a goner and if you think a good-faith attempt to correct someone using reason and examples will help you online, frankly, you’re lost too. Wallies fuck your board up anyway. Thanks, Pontus.

Listening to podcasts while you skate
It's the ultimate vibe killer, only reserved for utter sickos.

If I’ve done my job right as your guide and mentor, you shouldn’t even be able to read this closing remark—you’re welcome. With your brain properly scrambled from another information onslaught, you are free from the shackles of caring about anything online. Ignorance is bliss and is also the language of the online world. Don't worry, after you stare blankly at this cascade of meaningless code for a few hours, you will get the itch to leave this dump behind to go skate. 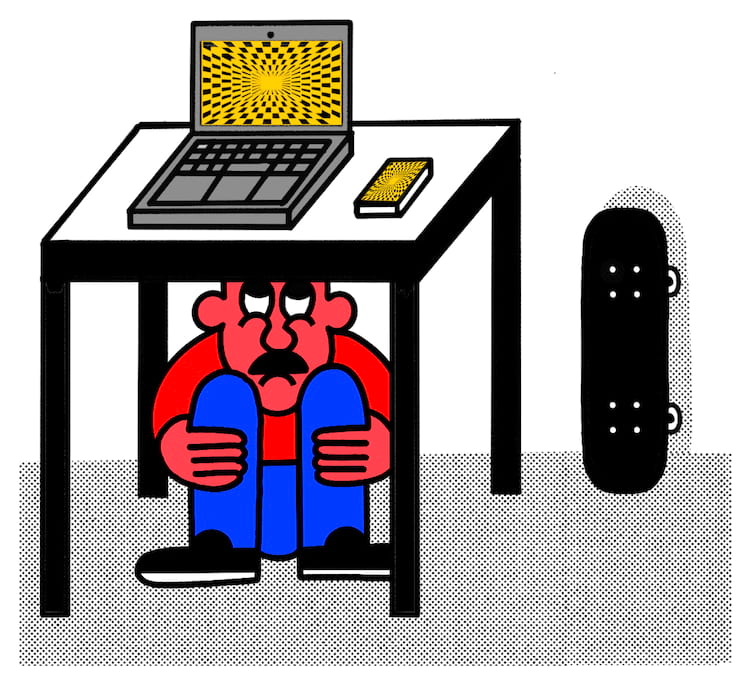