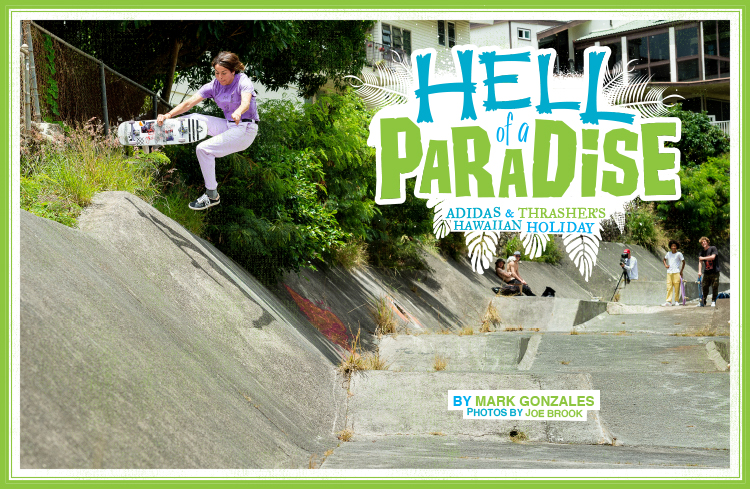 If you were skating in 1989, you undoubtedly saw photos and/or footage (or at the very least heard about) Mark Gonzales’ jaw-dropping channel ollie at the NSA mini-ramp comp in Hawaii that year. Two-thousand-eighteen marks Gonz’ 20-year anniversary with adidas, and to celebrate, the three-stripers teamed up with Thrasher and called in Team Pain to rebuild the iconic Y ramp on the shores of Waikiki Beach. And, of course, they invited Mark and a stocked crew of legends, up-and-comers and current hot shoes to rip the ramp (and the surrounding streets of Honolulu). The man himself sent over some words about the event, so we’ll just shut the hell up and let Gonz give you the scoop. Take it way, MG!
  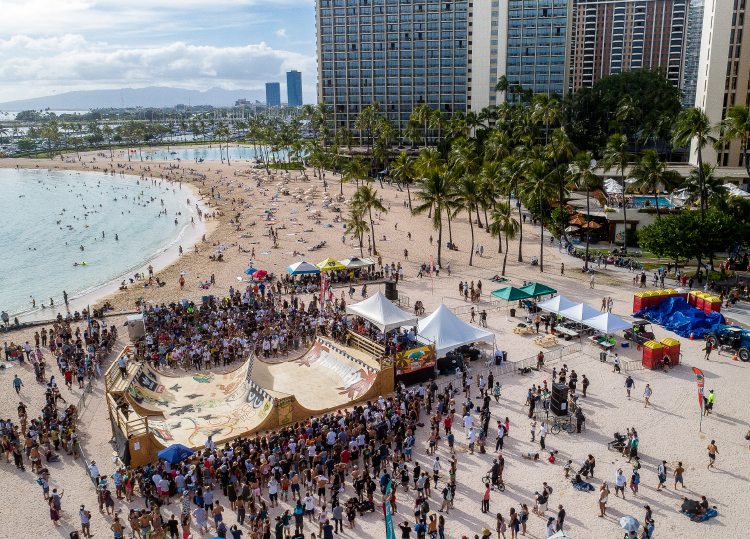 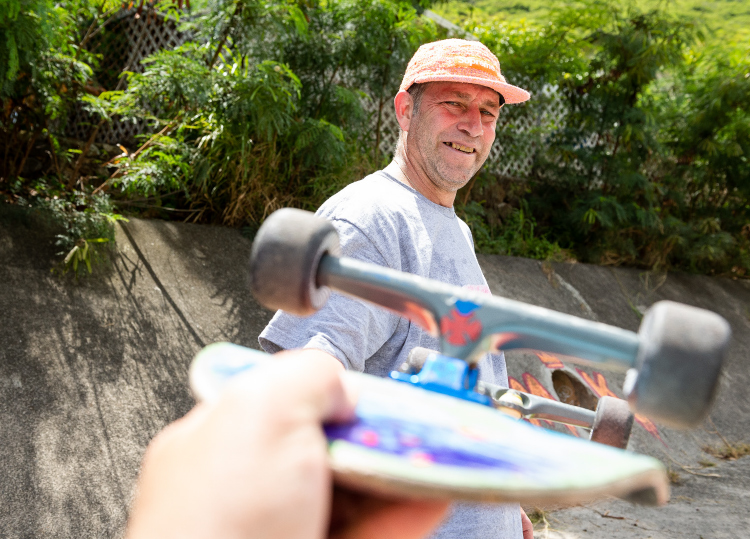 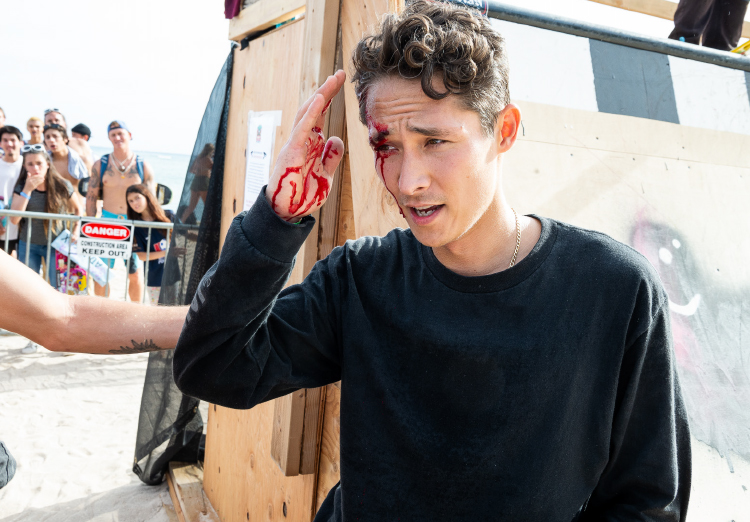 When we went to see the ramp and how it was coming along, it was pretty much completed. I left my skateboard at the hotel. One of the men working on the ramp, his son was skating it and another older guy let the kid ride his BMX bike as I rode his board. It was a small board with Krux and cool leopard-print griptape. It was drizzling but the sides of the ramp seemed dry. The channel was much smaller. I did a backside boneless and a few ollies and then went to jump the channel really low. The ramp was more wet than I had thought and I slipped out and went completely upside down and landed on my head. It was awesome, until later when my wrist was hurting. I was someplace else doing something entirely different and it dawned on me why it was hurting. Hello! You just took a nasty spill and thought nothing of it.   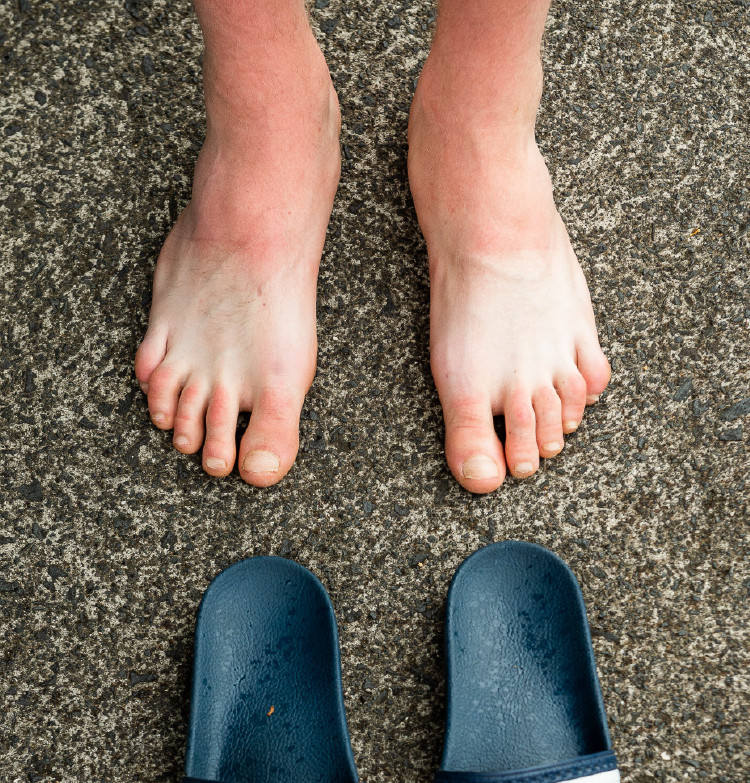 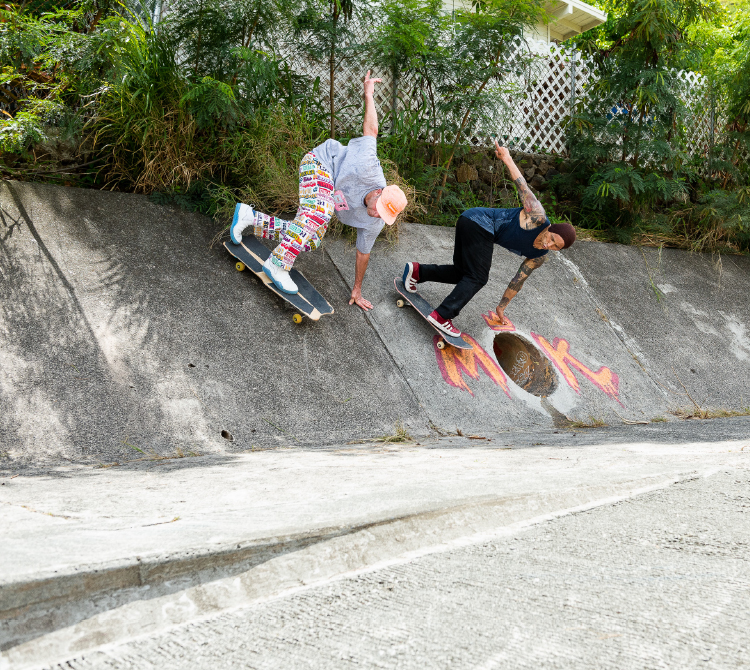 Gonz and Daewon soul skating over the MOK hole 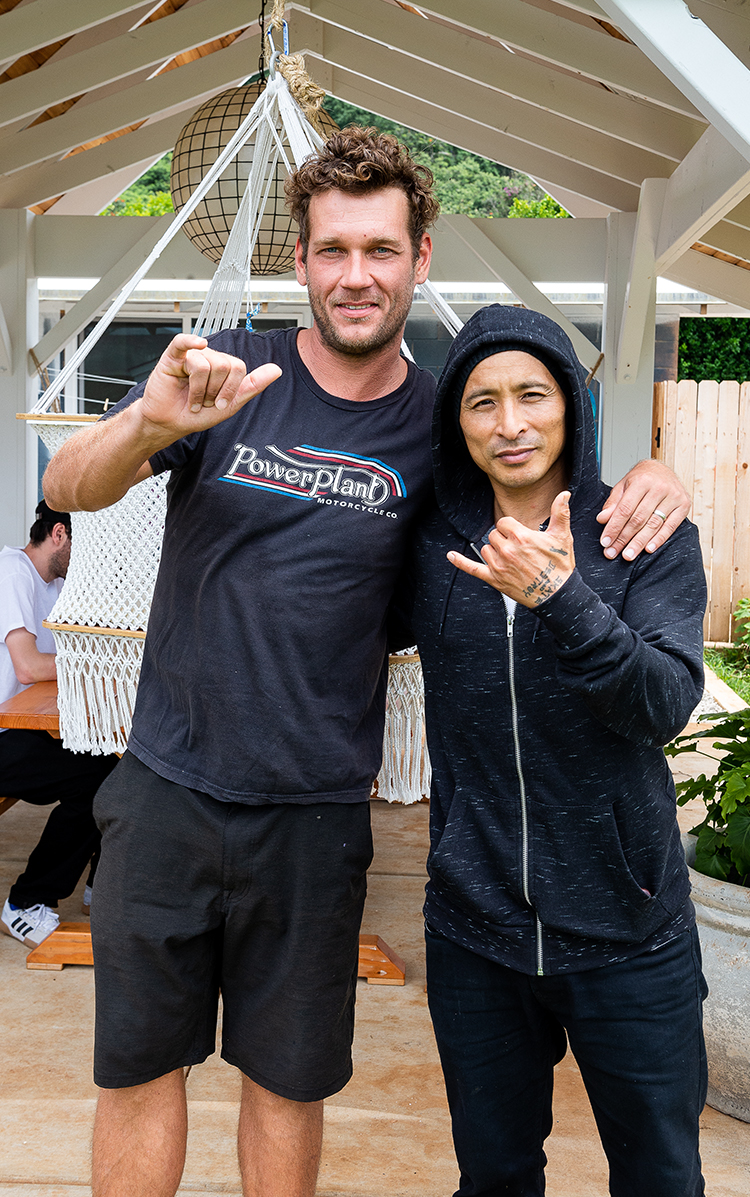 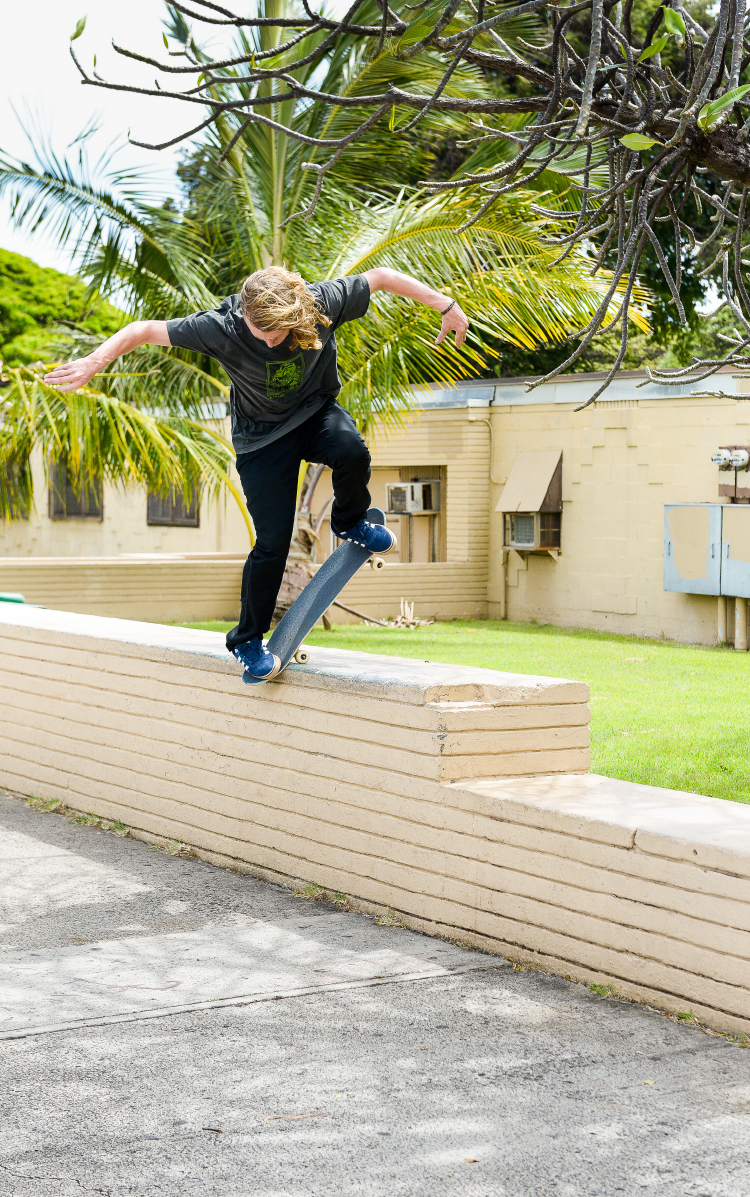 Alec Majerus got some hardware removed from his foot before the trip. Metal-free backside noseblunt to fakie 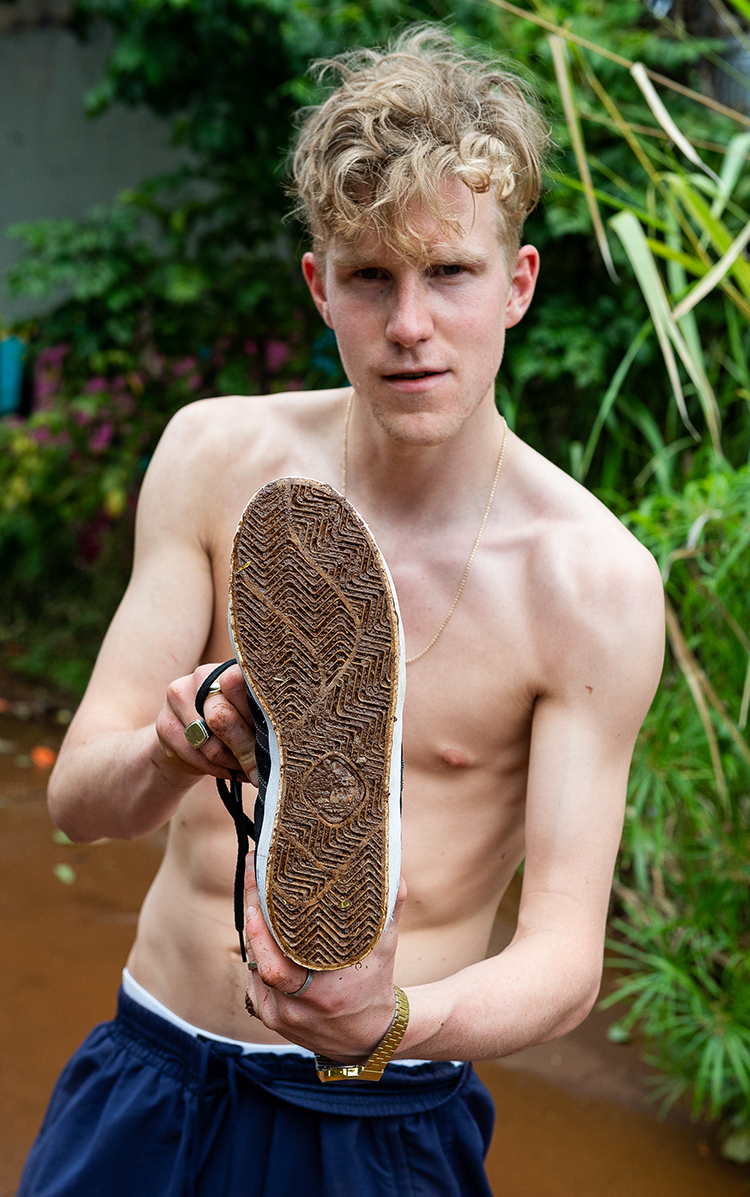 Every night after dinner, Donta Hill would hit the gym, sneak in a workout and do some shadow boxing. Seemed to work ’cause he put a beating on the streets! Upstream boardslide to 270 shove it 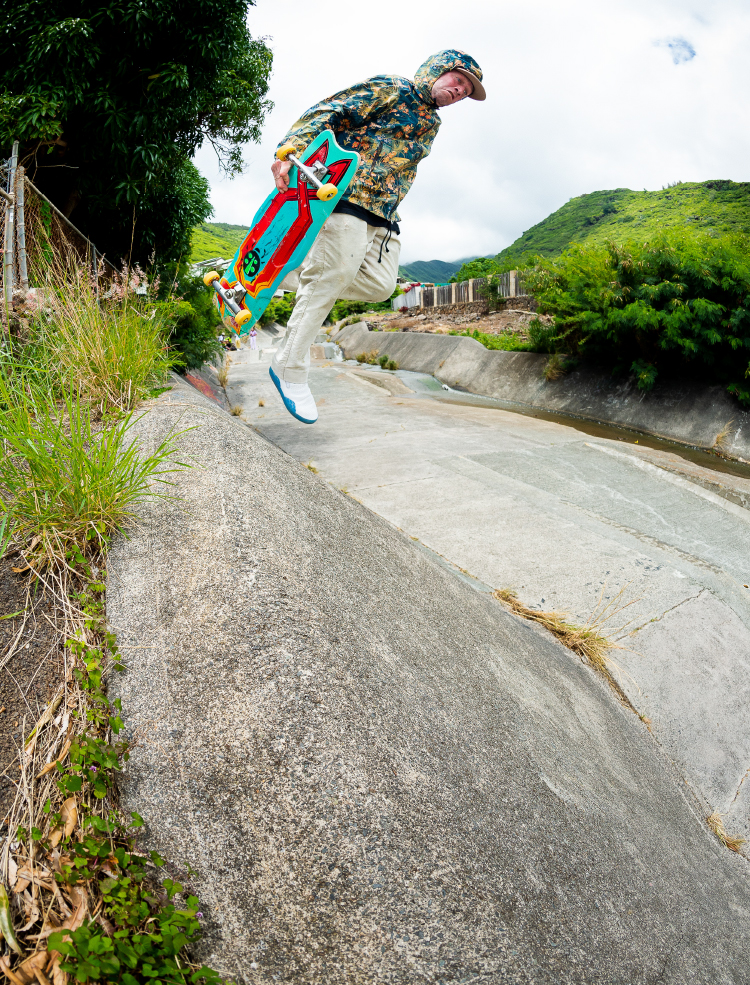 He took it frontside over the Y but Wallows got the backside boneless via Gonz—then he and dhis family went swimming with turtles. You never know what MG is gonna get into

In ’89, was the Y ramp a really big deal since it had a spine, a hip and a gap? Was that groundbreaking at the time?
Yeah, everybody was having so much fun. You could fly airs over the hip and then transfer. You know, it’s so weird, watching the video—I watched the video the other night and it was the era when lip tricks were super popular. Like Steve Douglas, all those skaters doing lip tricks, Tom Groholski, it was that era where it was lip versus vert. So a lot of people were trying to do lipslide spine transfers. Tony Hawk came up backward and did a fakie ollie to backward 50-50 and then reentered switchstance on the other side. So you watch the video and there are tons of tricks that no one does. The only boneless was Ben Schroeder’s when he tried to boneless the channel. I mean, that’s an amazing photo, but you know, like, no one’s doing backside bonelesses, no one’s doing beanplants. It was really strange. It was as if bonelesses weren’t even around at that time. They were around but everybody was concentrating on doing lip tricks at that time.

Were you scared when you first tried to ollie the channel?
No. You know, I had been hanging around with Lee Ralph a lot. He was like my skate buddy. The NSA gave all the different companies plans of the contest ramp. They wanted the riders to see the ramp to get everybody amped to come to Hawaii. I don’t remember how they did it because there wasn’t email back then, but they sent out what the ramp actually looked like. So I got the plans and I told Lee, “I wanna jump from this ramp to that ramp,” and Lee goes, “That doesn’t make sense, Mark. You can’t jump from there to there because the ramp is going in opposite directions. It’s like a bowl. How are you gonna pop up there? If it was a hip you could do it.” He kept saying I couldn’t do it and I said to Lee, “You watch me do it. I’m gonna do it.” ’Cause you know what? When you get something fixed in your head that’s all you wanna do, and so from the moment they gave me the plans and I discussed it with Lee, I had the idea to do it.

It looked like you slammed one time pretty hard going over the channel. Did you hurt your shins on the other transition?
No, I didn’t hurt my shins. I was too amped up. I wasn’t hurt. I heard the masonite bent where my shins hit but I didn’t get hurt. 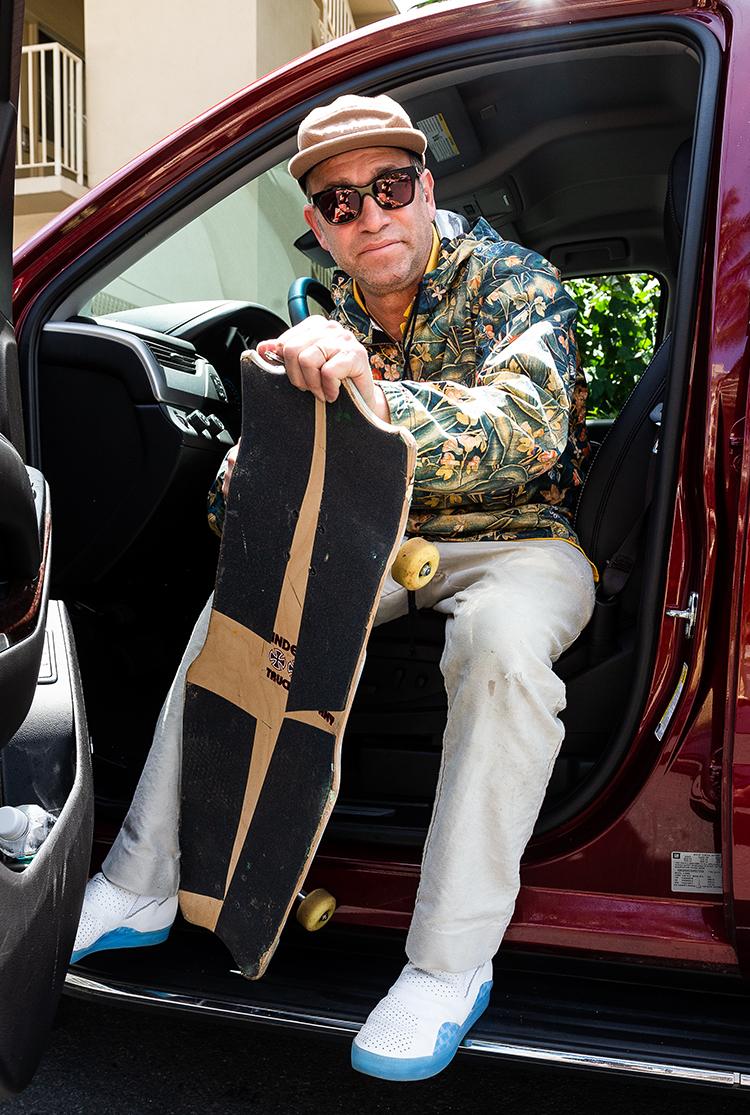 You were like Superman flying over the channel.
The other thing that was also kind of a bummer was that Lee wasn’t able to come to the Y ramp contest, because prior to it the Swatch Impact Tour was in Paris and when everybody was coming back to America afterwards, he was going through customs and the customs people asked him if he was pro. Lee said, “I’m not a pro,” and they said, “Yes you are pro. Look, your name’s on this itinerary for when the Swatch pros skate.” And he got deported. So he couldn’t even come to the Hawaii contest.

When it comes to immigration and stuff like that, it’s no joke.
You gotta fly low and avoid radar. That was a bummer because he would have ripped that contest. It would have been fun to watch Lee skate that ramp.

I always thought you won the contest. I feel like the ollie overshadowed everything. I just found out while we were here that Cab actually won it, but I couldn’t even find the results online.
Yeah. Well, Cab stayed on his board and he had perfect lines and stuff. I watched it, too, and my runs were okay, but I didn’t win the contest. I just jumped the big channel at the end. That’s what I had said and that’s what I did. I think Tony skated good; Eric Dressen skated really good. I mean, believe it or not, Micke Alba skated really good and it’s a mini ramp. This time I think my favorite out of the old guys was Ben Schroeder. He skated well.

Who else at the time do you think could have ollied it?
Maybe Lee Ralph.

Were you surprised this past weekend of the tricks that went down over the channel?
Yeah, Heimana Reynolds—he was just on fire.

Heimana was going for it!
Yeah, everybody did well, though. Milton Martinez, he was trying the blindsided kickflip to fakie. Willis Kimbel did a switch 5-0 across it easily and then he didn’t land it so he started trying to do the switch 50-50, but he was so much closer when he just did the 5-0.

How did it feel to ollie the channel 29 years later?
I think it was just like the same thing, exactly.

Did you like the boneless better or the ollie?
Well, I don’t know. I saw one of the young guys do a big frontside boneless across it and I was, like, damn I wanna do that. That looks cool.

I heard you say you wanted to try to frontside invert the channel.

Actually, yeah. I wanted to but you need actual vert to do a big flying frontside invert. I could not project myself from such a small angle into a frontside handplant up on the top on the other side and be reentering on that mini ramp. It’s too difficult. I mean, I would have to squish up like a potato or something to come down that transition. Yeah, I drew pictures of it and I thought about it seriously. Ronnie Sandoval tried to eggplant it and as he was doing it I was praying. I was, like, “Please don’t get hurt.”

What would be your dream trick to do over the channel?
Get some Silly Putty and fill it in.
 

Most visitors to Sheepside try to unlock the loop, but Daewon found the secret code for the gap—quick-flick 360 flip to fakie

Well, that was day one. The next day I went to get spray paint to paint the ramp. It was hard to paint. I wanted to paint my new board more than painting the ramp, so I did both. Caballero, Eric Dressen, Christian and Pat Ngoho all helped to make art on ramp. The big K-750 was emitting lots of paint; the wind was kicking up heavy off-spray, so I put a shirt over my face to cover my nostrils. Cab worked hard and made a detailed dragon. Ngoho had some cool looking Hopi Indian old-school LA Dogtown art happening. Dressen made a skull in the center of another Hopi head with antennas. Christian made a portrait of me. I made a lot of birds and tried to add color. I made a poodle that looked so bad I figured I would write “poodle” underneath it so you’d know what it was. 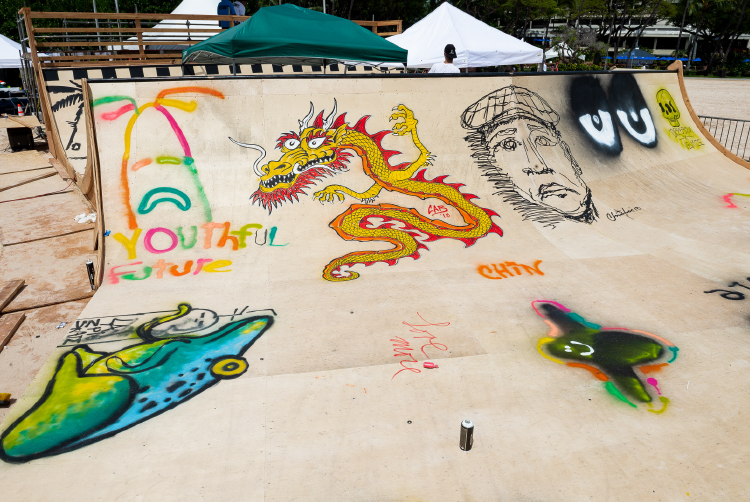 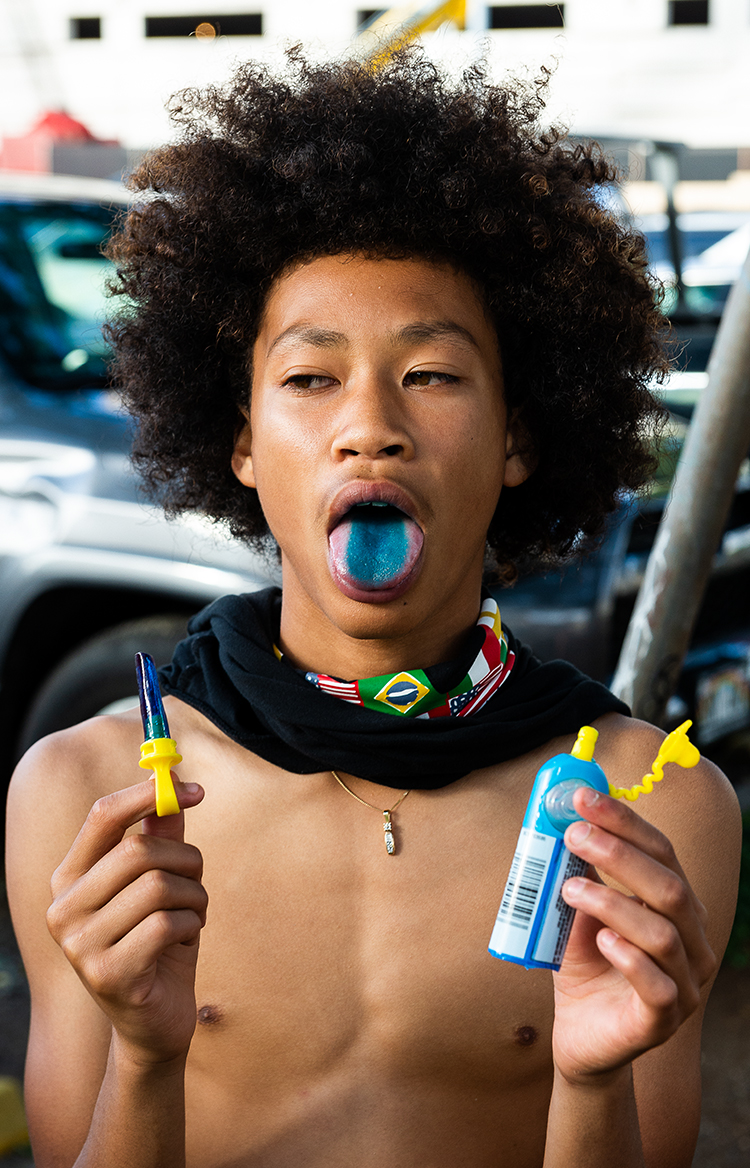 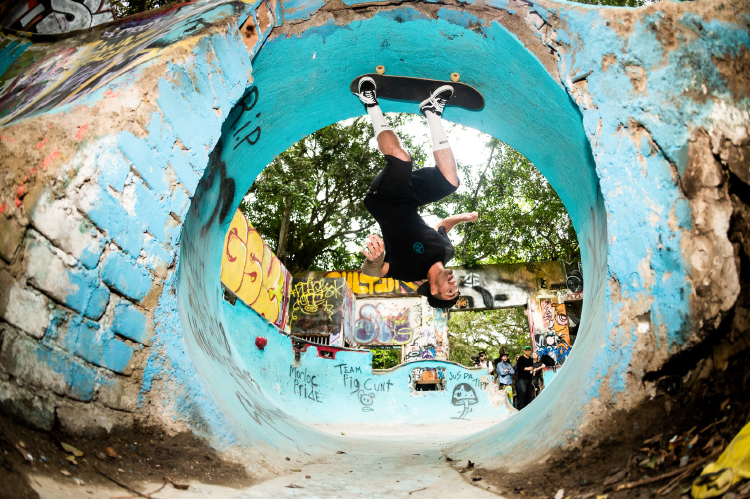 Later on that night, Cab texted me and asked if I’d like to skate the ramp at 9:30 am the day of the event to practice beforehand. I had already planned to go to the Bernice P. Bishop Museum, because I had a book on Hawaiian art that I liked so much and I wanted to see the stuff in my book in person. It’s been maybe five or six years—maybe more—that I’ve been trying to see this stuff and, well, I got my chance to see it. It was awesome. I really fucking loved it. When I got to the Y ramp the day of the contest and the old guys’ demo, I had already spent the morning at the museum. It was fun but the parking was expensive. I’m not sure why I didn’t try to resell our parking coupon when we left the museum, but I didn’t.

Busenitz had to tone down his pop on this back tail kickflip because he kept launching himself into the corner of the building. Even legends gotta slow their roll now and then 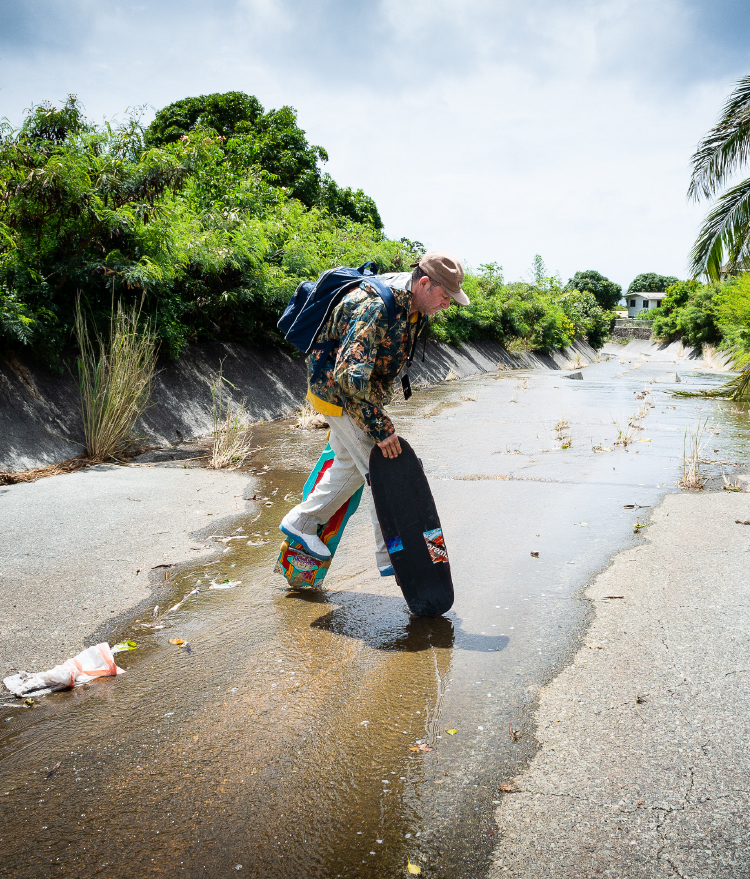 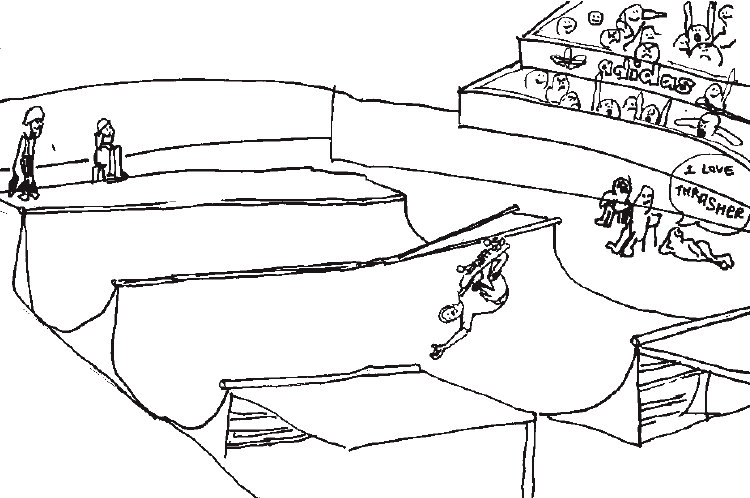 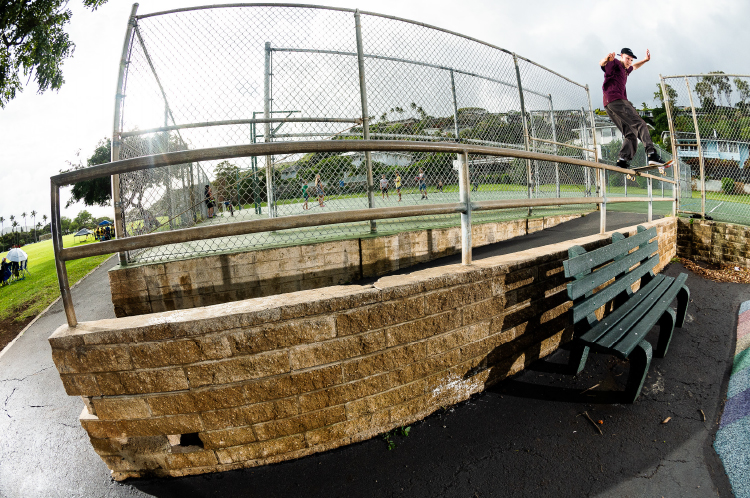 Magnus Bordewick told us, “I don’t skate rails or loops. It’s not my thing.” How do you say “liar” in Norwegian? Front board to fakie 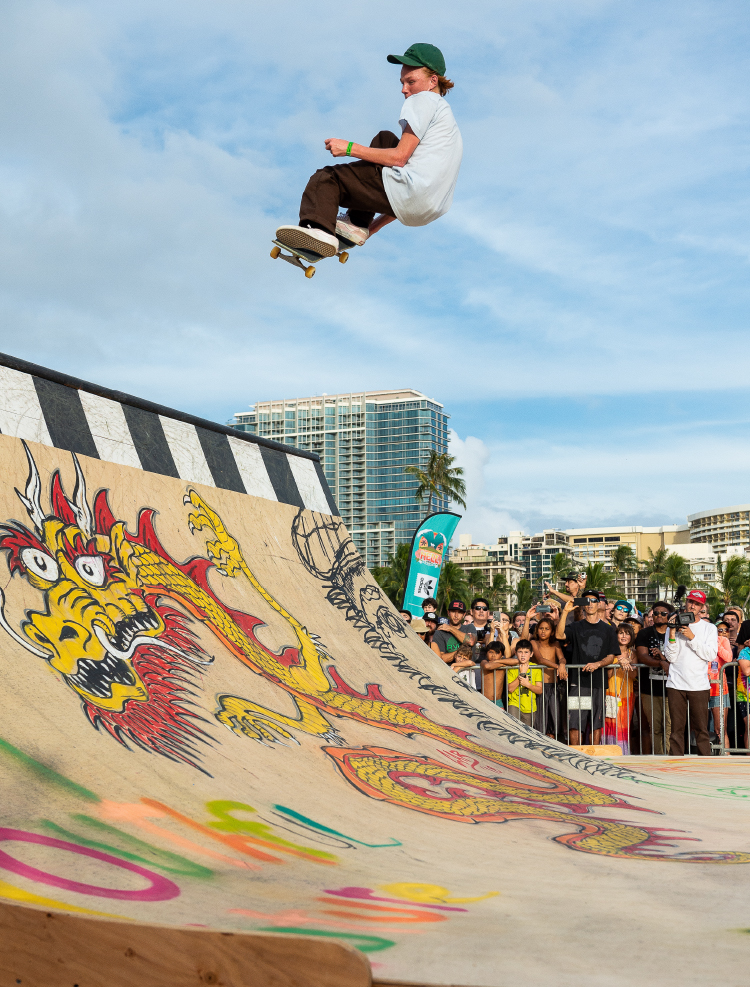 Roman Pabich, nose-grab 540 on his way to first place. The future is just fine 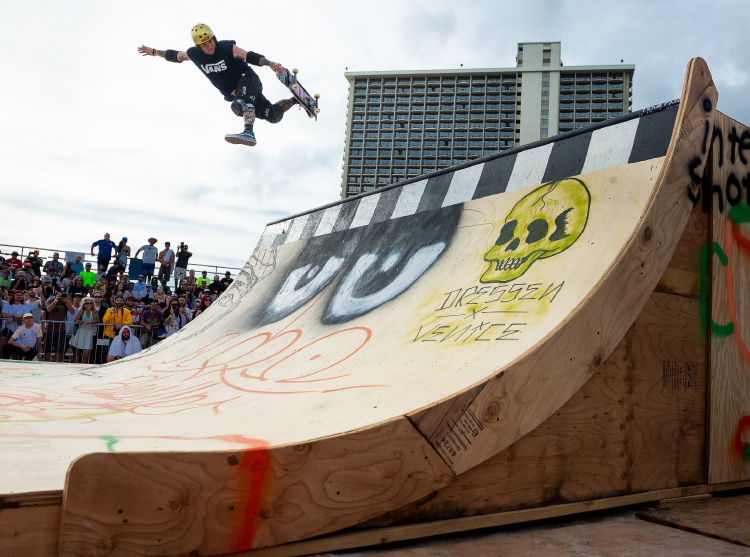 When we went to see the ramp and how it was coming along, it was pretty much completed. I left my skateboard at the hotel. One of the men working on the ramp, his son was skating it and another older guy let the kid ride his BMX bike as I rode his board. It was a small board with Krux and cool leopard-print griptape. It was drizzling but the sides of the ramp seemed dry. The channel was much smaller. I did a backside boneless and a few ollies and then went to jump the channel really low. The ramp was more wet than I had thought and I slipped out and went completely upside down and landed on my head. It was awesome, until later when my wrist was hurting. I was someplace else doing something entirely different and it dawned on me why it was hurting. Hello! You just took a nasty spill and thought nothing of it. 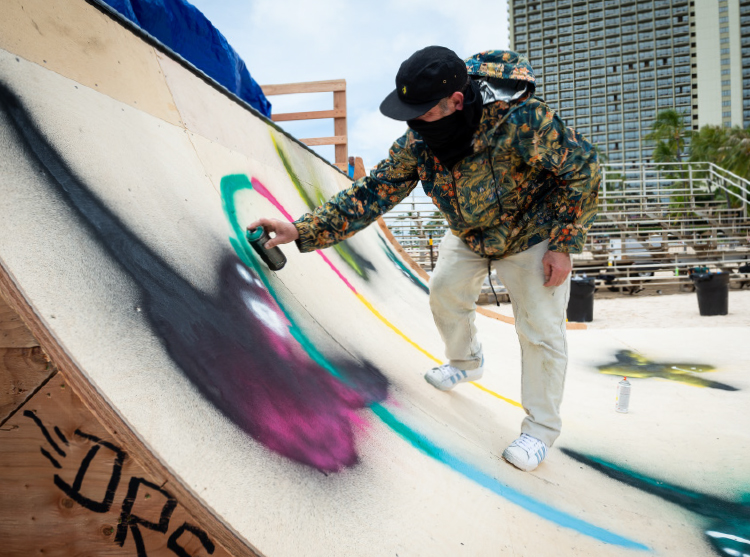 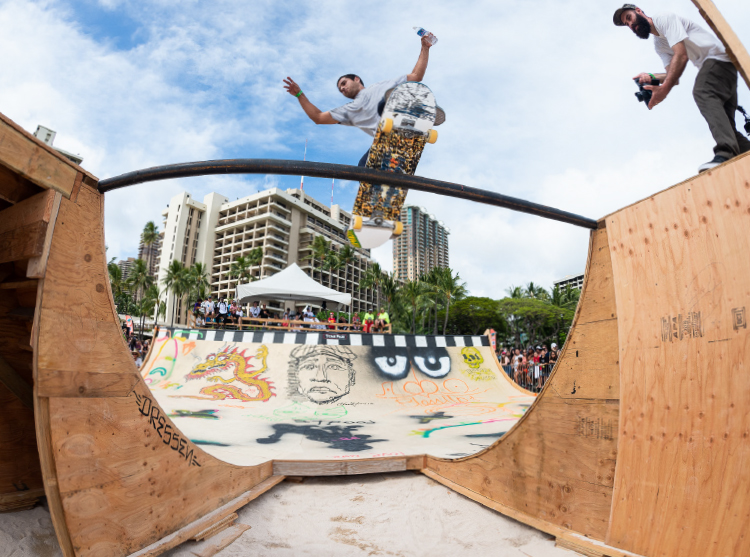 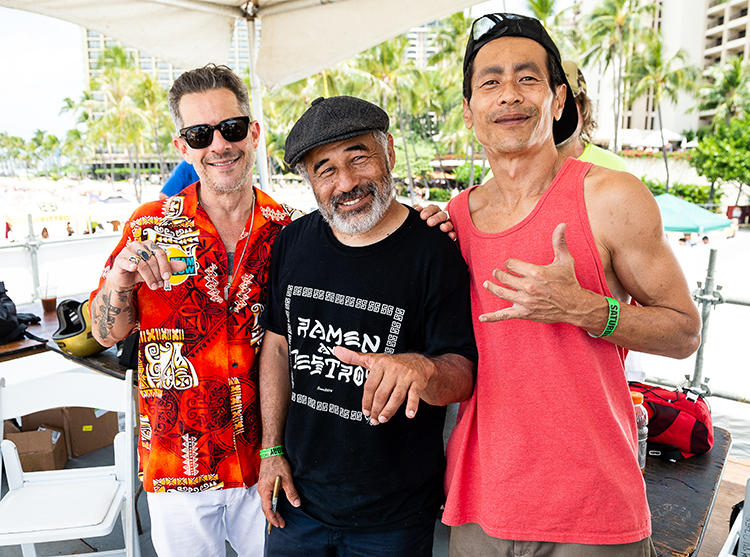 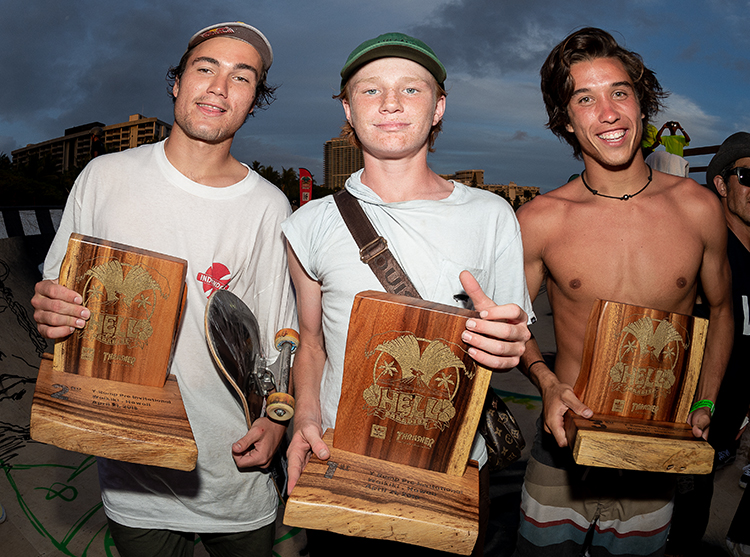