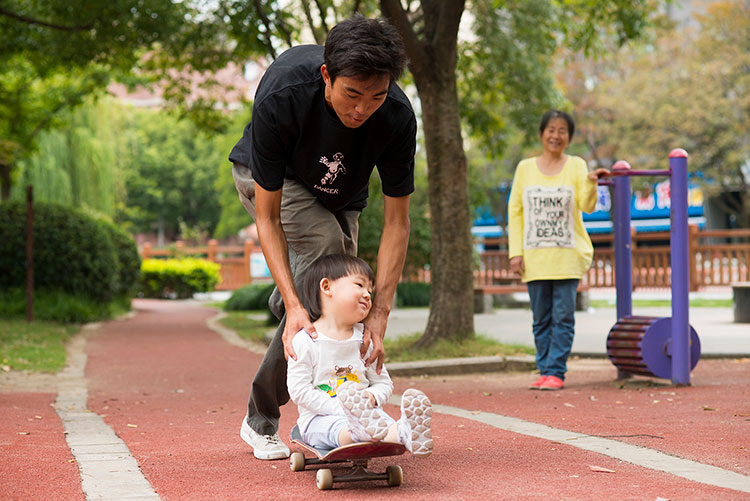 Shin, bringing skateboarding to the youth

We did a skate trip to Shanghai. Big deal, right? Bear with me here…

Laurence Keefe and I are respectively the Japanese and Australian adidas skateboarding TMs. We were both scheduled to head to China in October for adidas events and cooked up the plan to each bring three of our boys and do a bit of skating before the real work began. Accompanying Laurence were Shin Sanbongi, Hiroki Muraoka and Issey Kumatani. I brought Gabriel Summers, LP Nuku and Adam Davies. We coaxed Kyle Camarillo and Leigh Bolton to come along and document the shenanigans for Thrasher and here we have it—the Head Count video. Neither teams had met each other before but we figured nothing will bring a group together quite like marble plazas, dirt cheap Tsingtaos and buffet breakfasts.

I’ve done a few stints to China but it had been over ten years since I’d visited Shanghai and, man, it’s like a totally different place. In 2005 I was smogged out, searching for Buddhist vegetarian restaurants but this time around it was vegan burritos and blue skies!

The insane terrain hasn’t stopped, though, and even though tons of teams have come through and pillaged the city, about 90-percent of the ones we hit were new to the abuse of the board. Our trip was such a success that we decided to keep the ball rolling and have continued to travel together through 2019. Thanks to the streets, plazas and locals of Shanghai for showing us such an amazing time. Xiexie!!! 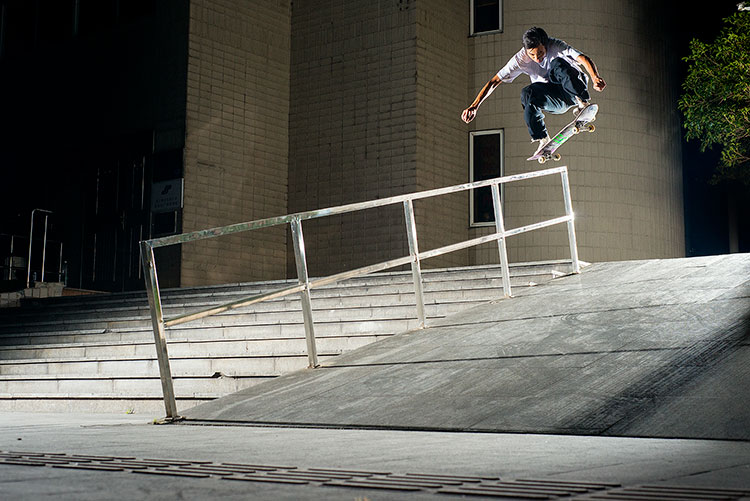 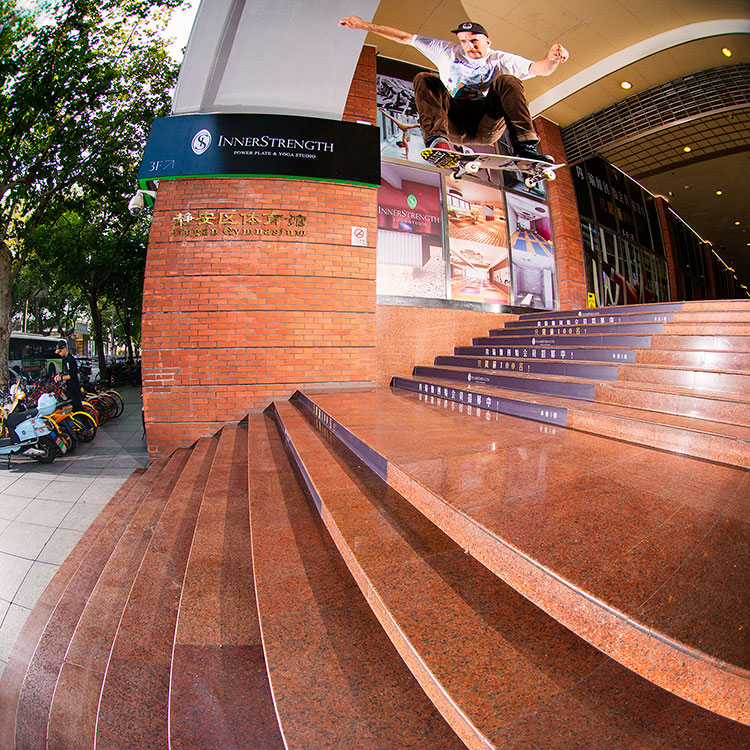 Gabbers was trying to ollie a huge double set one day in an all-black outfit, so I offered up my prized white Neil Blender/Dinosaur Jr shirt for him to wear so he’d pop out in the photo. After a few slams the shirt was bloodied, stained and had holes in it, and I bade it farewell and godspeed. I spied the shirt on the floor of his room a couple of days later and had to admit, it was a great way for it to go out 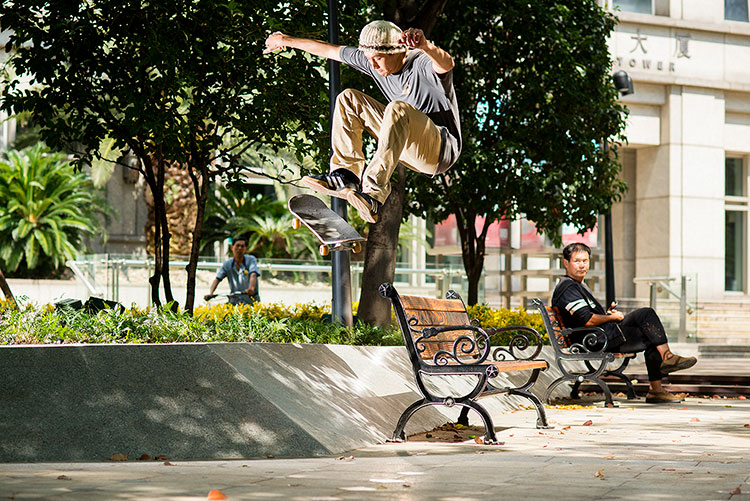 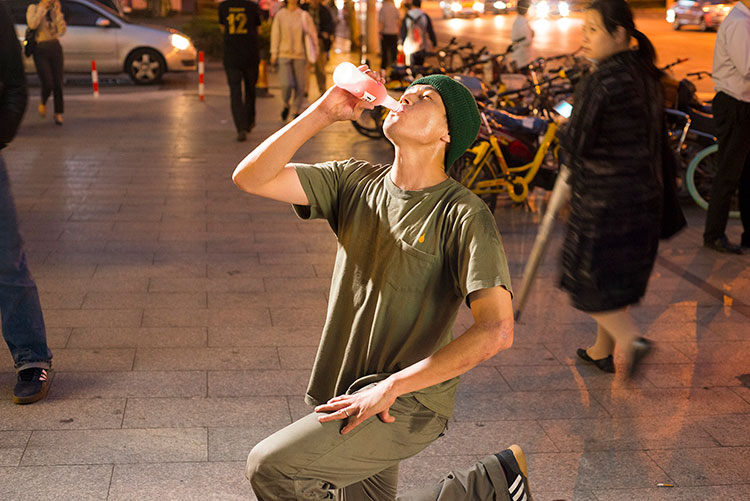 The security guard at this building wasn't into us skating there on the middle of a Wednesday afternoon. After a comical game of cat and mouse, Adam Davies snagged this backside bigspin fakie manual half Cab out and we let the poor bloke continue his day

Adam was carrying on the torch of a game he’d played on a previous China trip where if somebody hands you a Bacardi Breezer you have to drop a knee and skull it. However, if you’re currently drinking a Breezer you you can counter-Breeze and they have to skull both of them. The game got so out of control that we were all in constant fear of getting Breezered. My favorite moment was when I put a Breezer at Adam’s hotel-room door about five minutes after he’d gone to bed, knocked and ran. He took it like a man, though. He dropped a knee in his boxers and took it down in one gulp. Then I rolled in another.

On an obstacle almost too good to be real, Issey Kumatani scorches out a back lip to 5-0 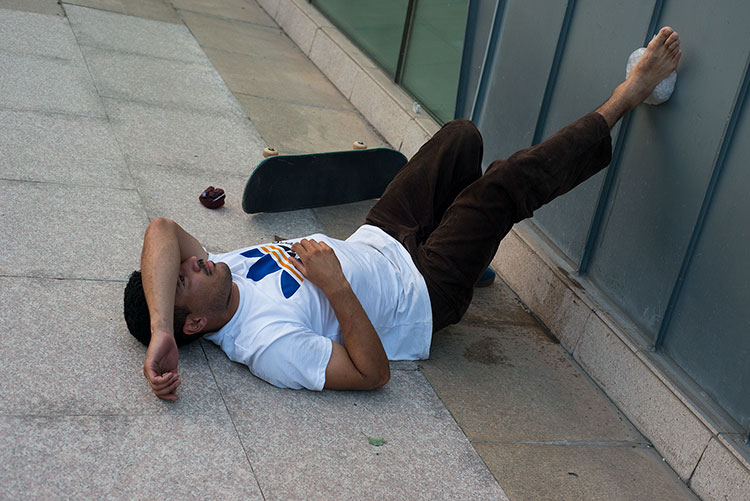 LP got robbed on this trip—a nollie heelflip turned into a nollie heel bruise that would not let him stand on his board for the rest of the trip. In his frustration after destroying his heel, he performed something that I’ve never witnessed before. Homie reached down his pants and wedgied himself so hard that he ripped his own underwear off! Apparently it’s called “helmsing” in his home city of Melbourne. Beats focusing your board, I suppose…

When the terrain is this sick even the TM is gonna get some. Laurence Keefe puts down a tailslide transfer and ollies out over the gap 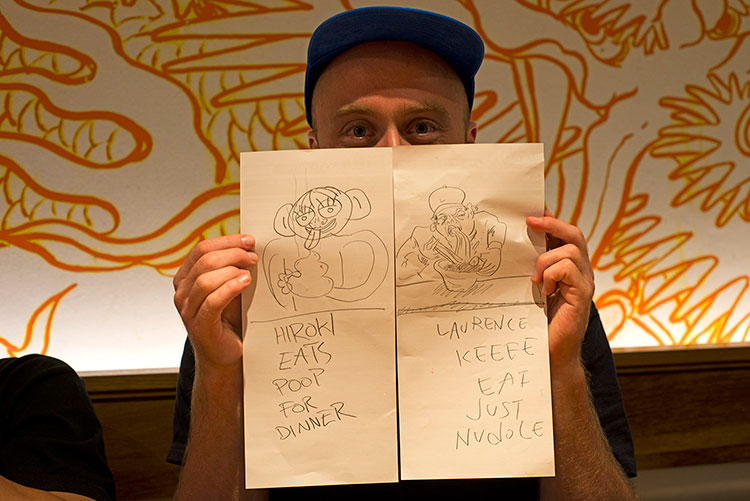 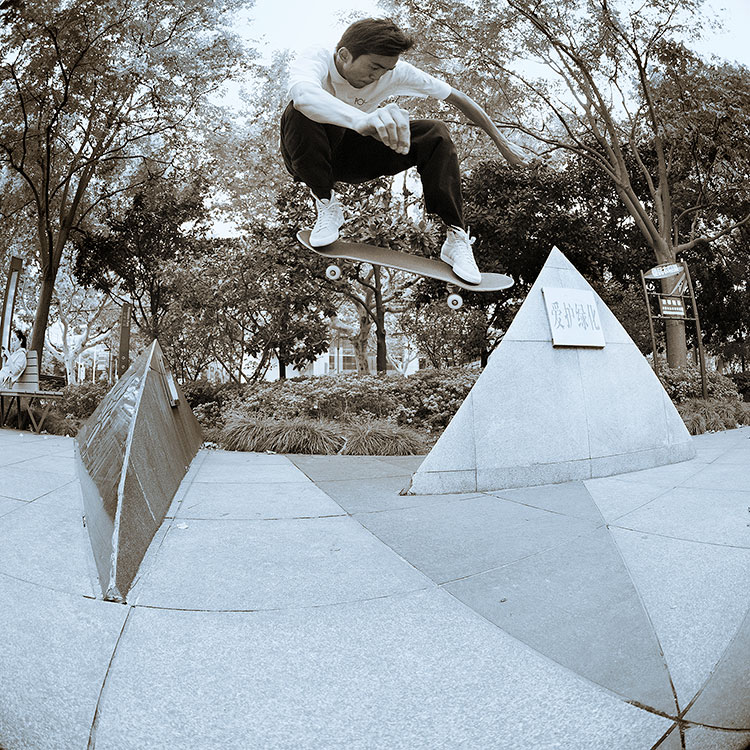 I've been trying to skate this spot since 2005 but have always gotten kicked out. This time it was our lucky day! Shin Sanbongi, wallie backside wallride and frontsode wallride at a gift from the Skate Gods 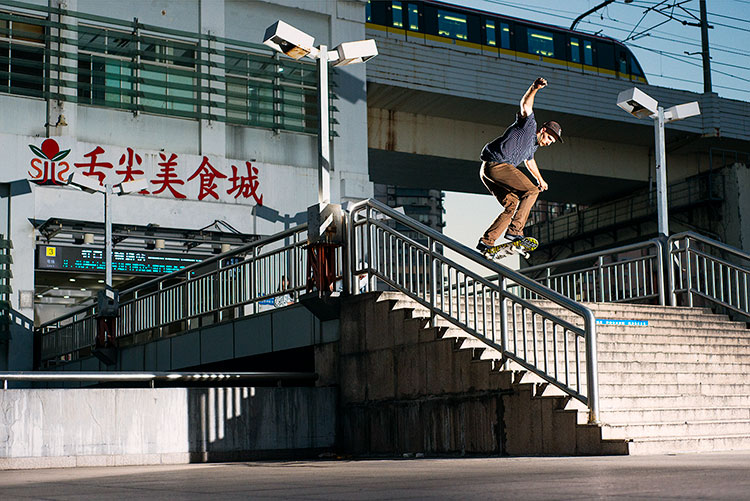 Gabriel Summers was our resident handrail master so every time we spotted one all eyes were cast in his direction. This tall-order backside 5-0 was no probs for Gabbers 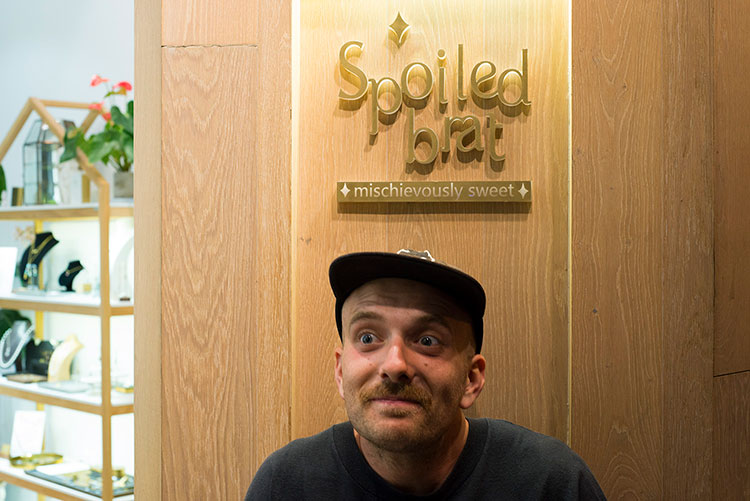 Hey, Gabbers, which one is it? 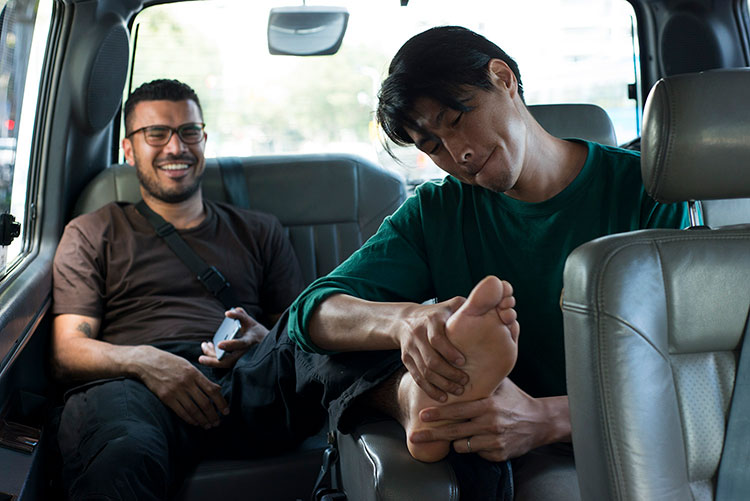 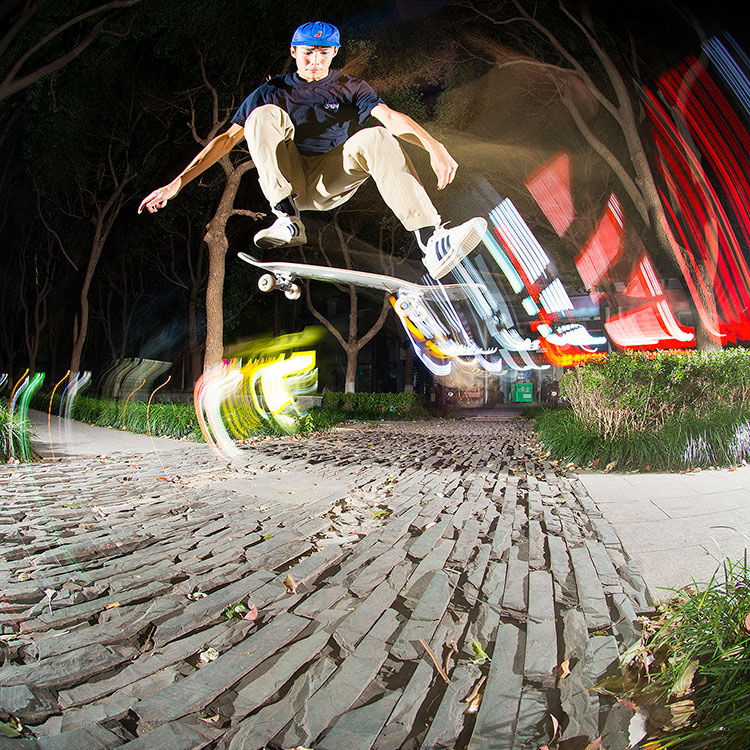 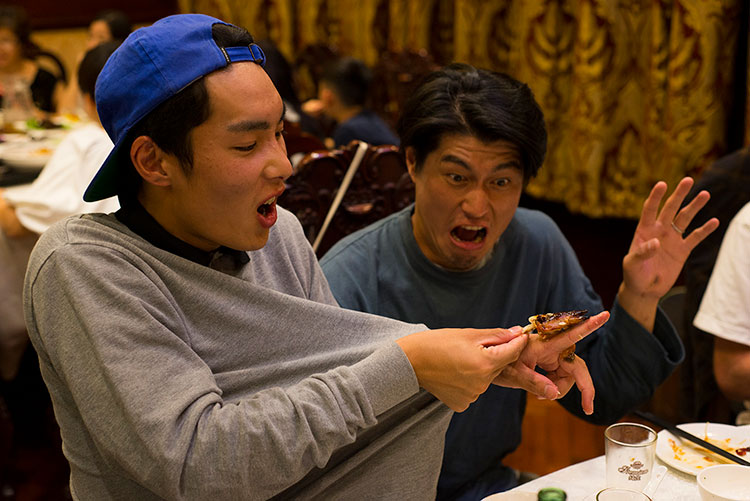 One night we treated ourselves and ate at a Japanese restaurant and had a full team dinner budget blowout. We ate like kings and then got a bit carried away pouring each other imported Japanese beers and sake and when the bill came there were so many zeroes on it I thought it included the cents as well. It didn’t. Laurence and I scraped the money together and it wasn’t until we started walking back to the hotel—we had been sitting for a couple of hours—that I realized how legless some of the boys had gotten. Issey and LP were propping each other up like a pair of newborn calves and at one point they tripped over a planter and dropped five feet to a floor below us. Fortunately they were so relaxed that they weren’t hurt. They just giggled a bunch and soldiered on

Laurence filmed this lipslide to tailslide and then I asked him for one more for a sequence. He put it down next shot as security rolled up in a golf cart. We out! 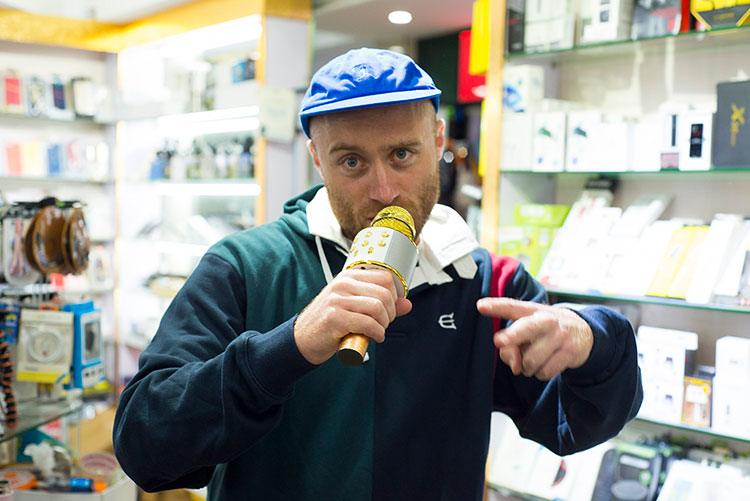 No trip to Shanghai is complete without a trip to the bootleg mall. Laurence tests out a new mic with a few hot bars 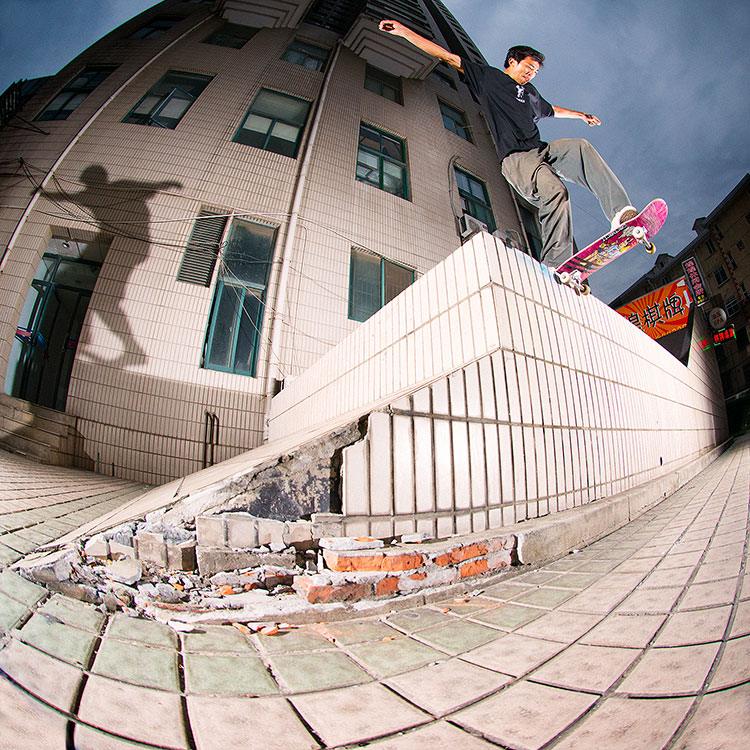 Even Shanghai has some crust in the back alleys—Shin, wallie back tail 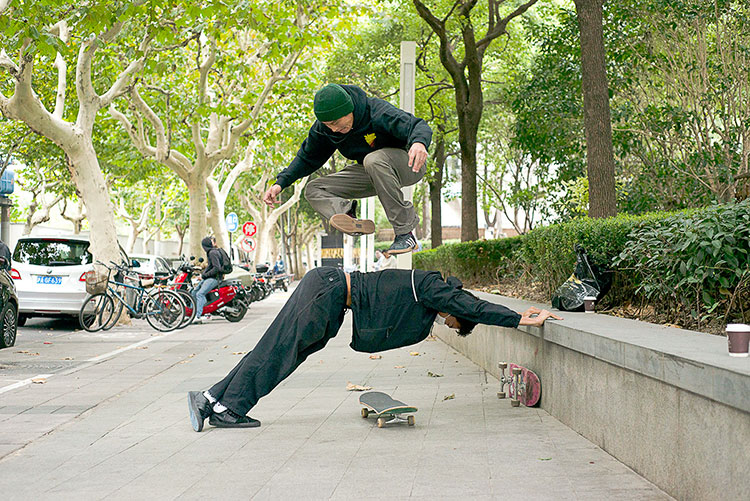 Hiroki and Shin warming up in their own separate ways 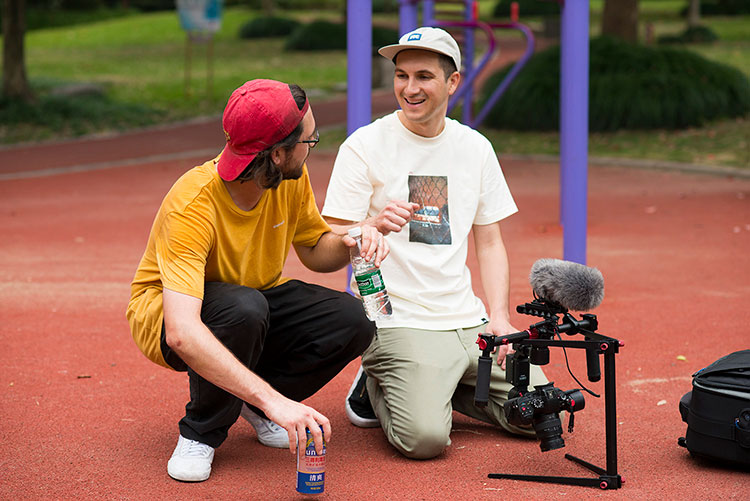 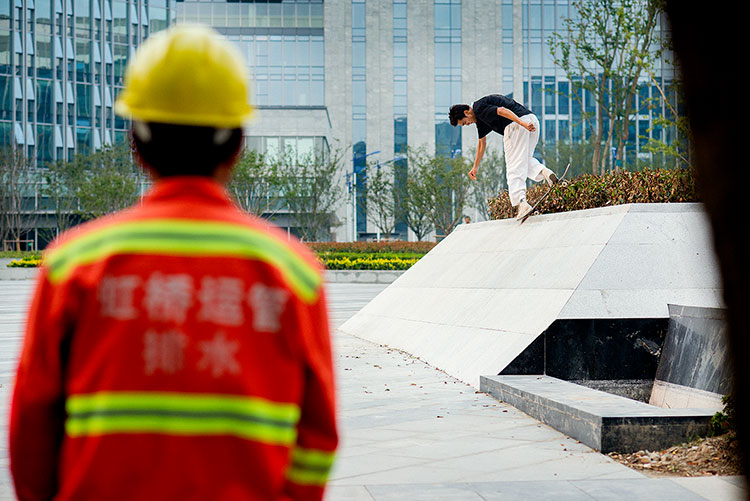 One day some locals took us to a brand new plaza that had never been skated. Shin was like a kid in a candy store, hitting every ledge and bank like the spot was in danger of sinking into the Earth. We got kicked out fairly quickly but the spot was just too good so we eventually went back and kept skating, ignoring the security guards for another few hours. We affectionately dubbed the spot Shin City, so if you ever find yourself there just know—that’s Shin’s spot. Backside noseblunt, security be damned 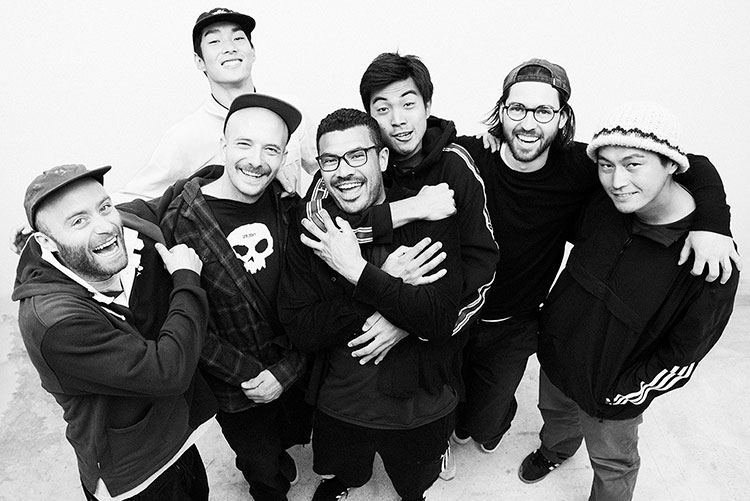 It was on a van ride from one amazing spot to the next that Hiroki, now fully at home with his new Australian brothers, announced, “This is perfect; we are perfect men!” It was so ridiculous yet fitting of how we all felt at that moment—away from the routines of home in fresh surroundings with new skate buddies, realizing that to be able to travel the world to play on skateboards with your mates is nothing short of perfect!