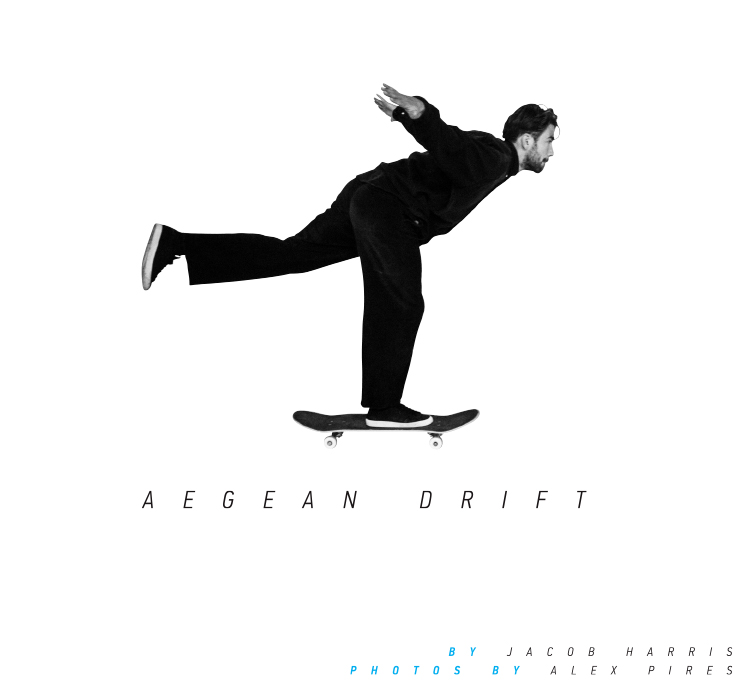 There is fun to be had in this city. And have you, too, tried to figure out what your legs are for? And have you, too, smelt the combined aroma of dog egg and fresh orange with breakfast? And have you, too, found yourself in the jetstream of the Greek marathon, being shouted at in some unintelligible archaic language by people in spandex? Come and meander with us during our short time in Athens. 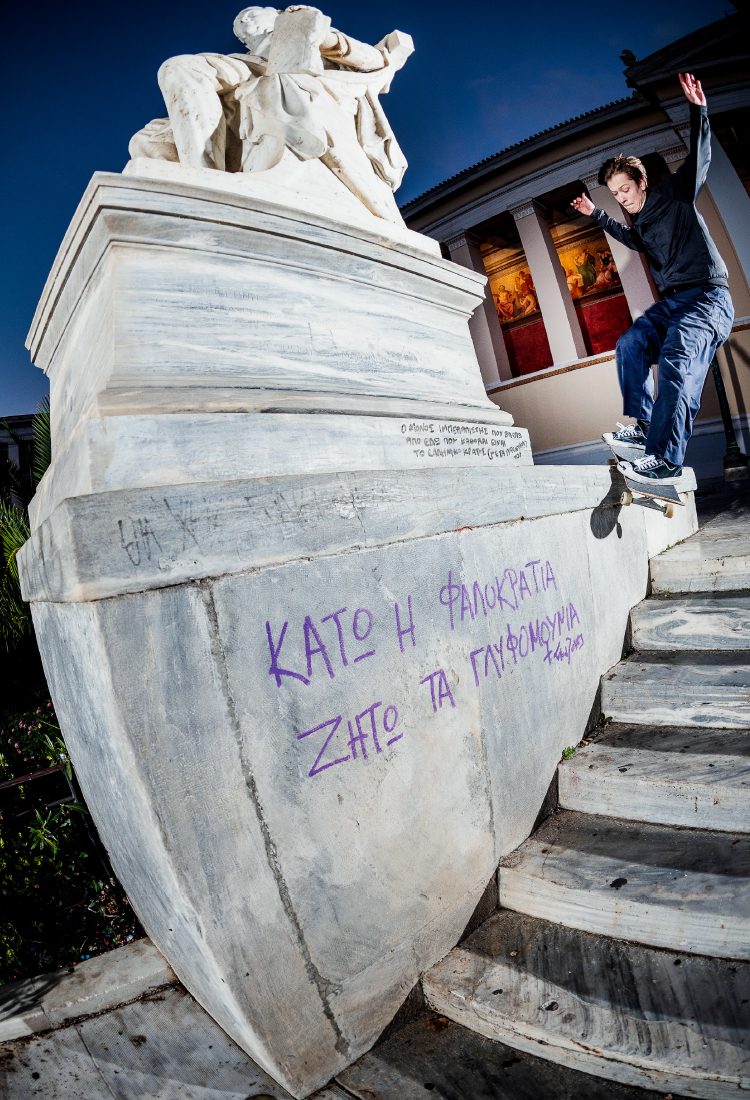 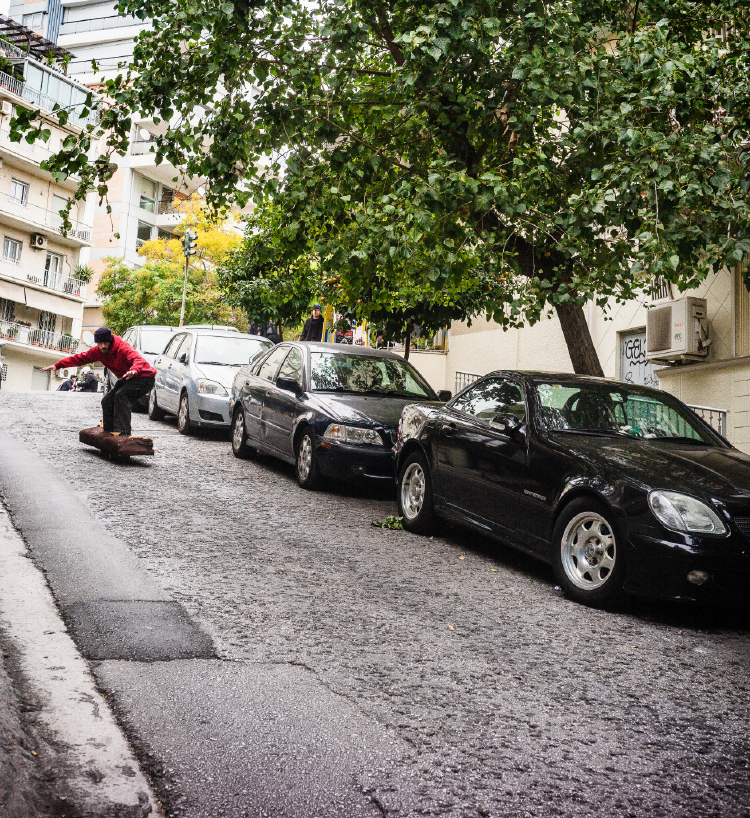 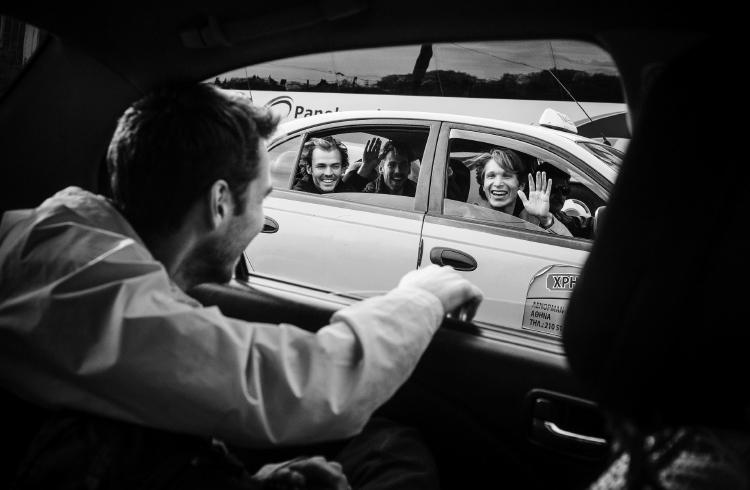 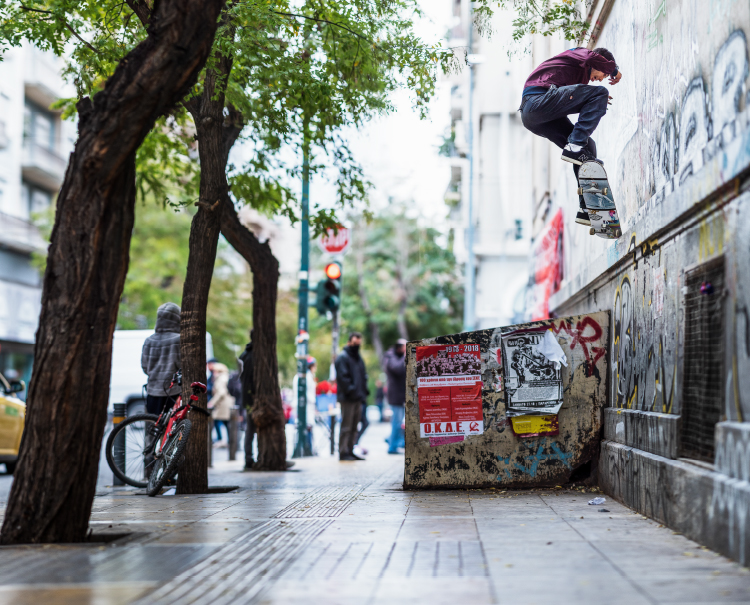 Everything grinds in Athens, even the buildings—Tom Knox, 50-50 back 180

Anybody who has been paying attention may be justified in their confusion at the sea path we’ve been trawling these two years. There seemed to be some sense to it as we were blown westwards across the colonies to the outer limits of human endurance and the hostile hell islands of Hawaii. “What’s going on?” I hear nobody ask. Well, don’t get me started. I’m not going to change the name to “Aegean Drift” or “European Skateboarders Skating In Different Places For Money” or even really think about it. We have Max Palmer and isn’t that enough for you, you pigs? Besides, all will make sense with time. 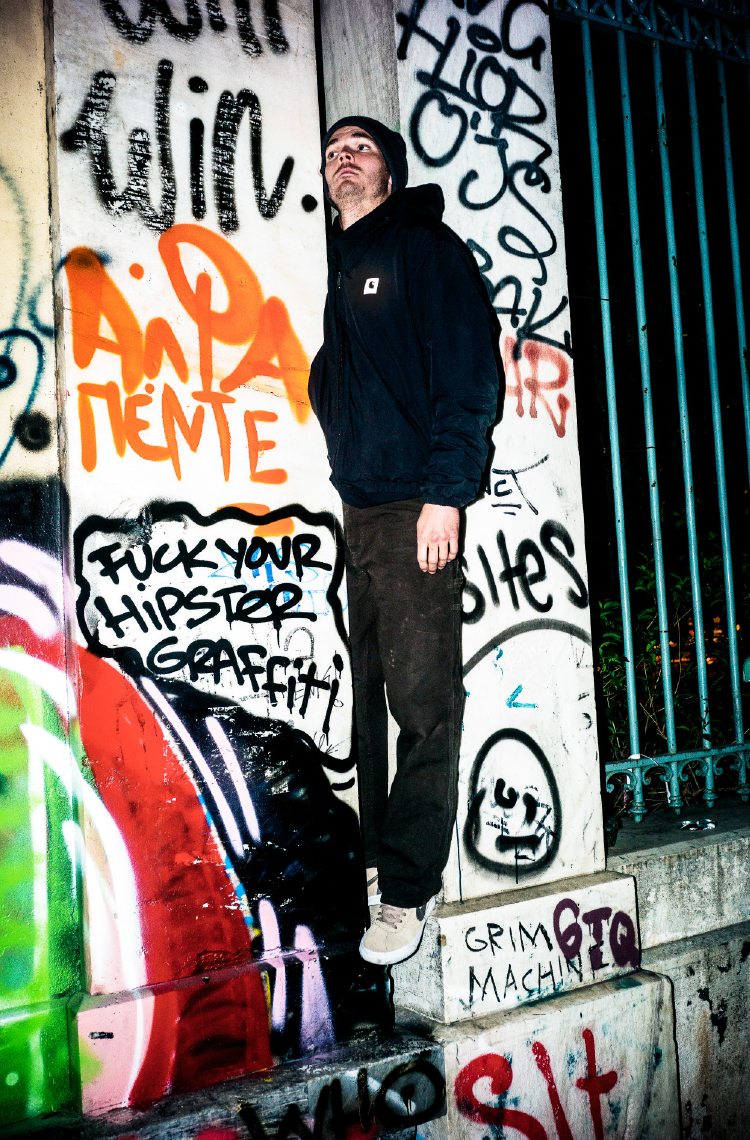 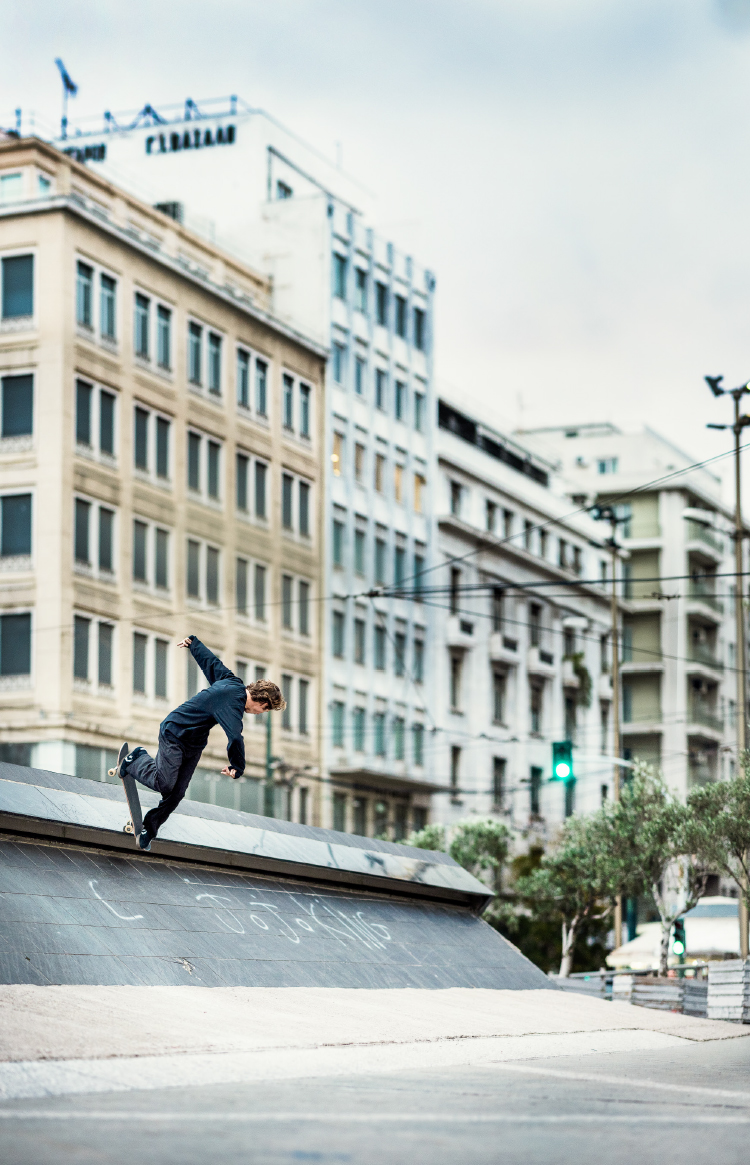 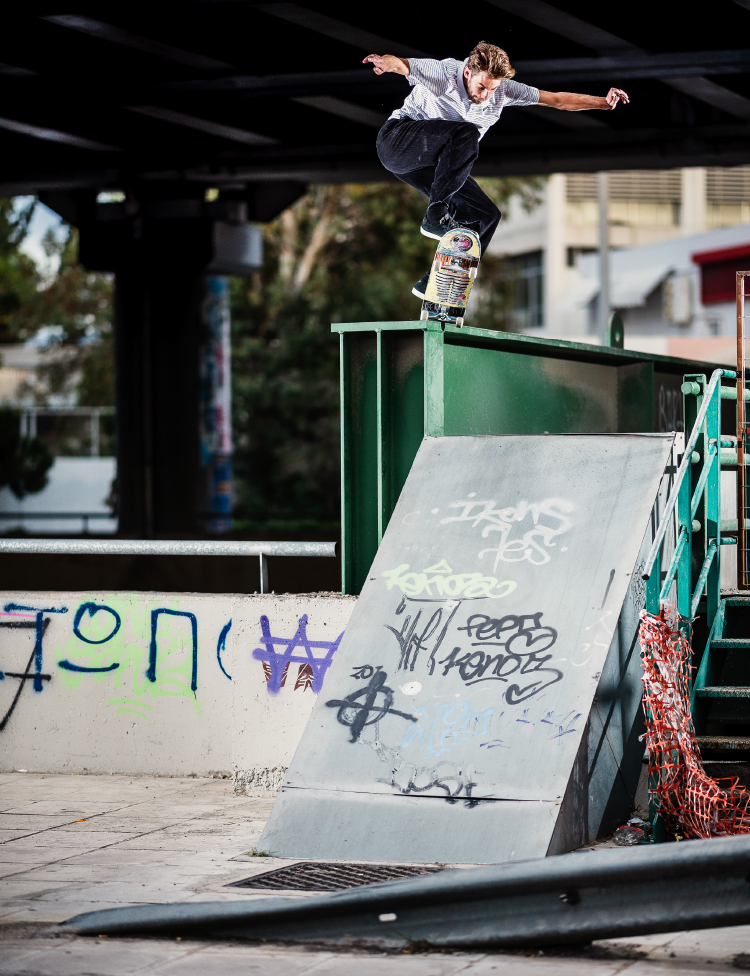 Nothing in life is really sacred except for maybe the Temple of Zeus, which a certain drifter tried to use as the dirtier kind of latrine one night out. But for the grace of either Zeus or the stray/possibly checked-out guard dog that gave chase (this ghost writer is unaware of the employment arrangements of said pooch) Zeus’ temple remains clean. Somebody once said “Always enter a room naked that way you can never get caught with your pants down.” Now I don’t know who said that but it may have flashed through said drifter’s mind, when running loose-belted towards the nearest scalable wall, that this advice had no bearing on his predicament but is good advice nonetheless. There are dogs upon dogs in this city and some of them bark but a lot of them woof with sad exasperation. The fate of a nation rests on the health of its dogs, or the other way ’round; who knows. Would a dog eat you? The answer is yes. It’s kill or be killed unfortunately and so post-morning dog slaughter we’d head to the university’s white marble floor and do flip tricks until tight leg muscles told us it was time to take cabs somewhere else for on-the-record skating.

This is called the ratspin but is it switch or maybe fakie? Ask Max Palmer 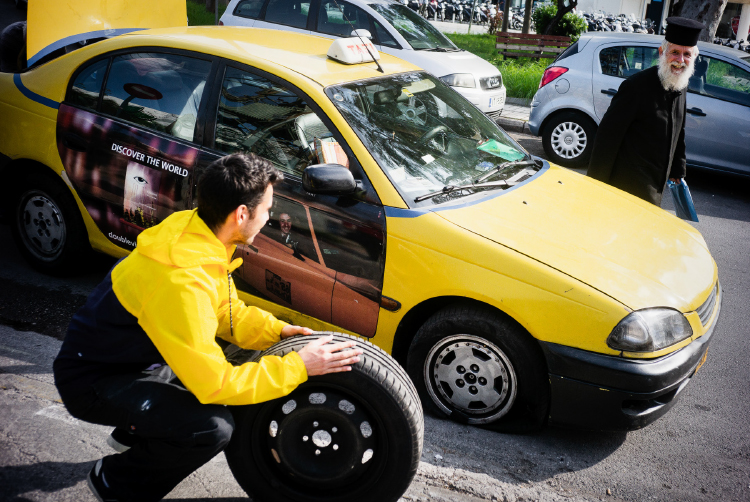 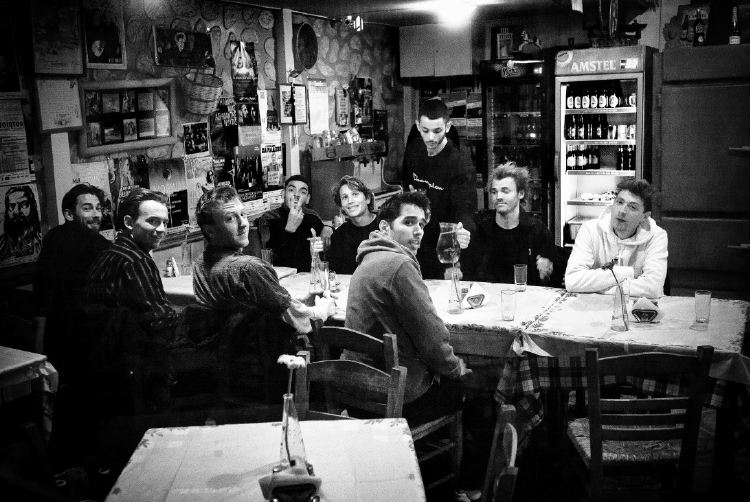 Currency tourism never feels all that good—the cab-drivers all seem to be moonlighting professors, brain-surgeons or investment bankers and it’s a competitive racket with territory and etiquettes and street fights. The Greek Einstein may well be right now fist fighting a hotel magnate over a six Euro fare to drive across the whole country. At some point Tom had to go into full dad-mode and change the wheel on one of our cabs because the driver probably should have gone into retirement pre-millennium and the same for his cab. This does not feel good. What does feel good, though, is restaurant food that’s basically free and infinite. And smoking in restaurants. If you can stop up the ears to your empathy with souvlaki and cigarettes, eat and smoke like a king and not feel bad that these are the spoils of years of conservative and punitive economic policy then Greece, my friend, is your pigpen.

We pride ourselves on sticking it out through the wet British winter but actually I’ll do literally anything to never have to dry a brick bank with Pret a Manger napkins ever again. You’re wearing gloves and pretty soon the napkins turn into gungy mulch and the mulch is in the fabric of your gloves and eventually in the fabric of your soul and you have to put your soul in the bin. I told our friend Matlok Bennet-Jones to come on the trip when I’d had a couple too many pints in London but luckily he’s really sick and everybody loves him. Good to have some fresh blood since accelerated aging is sinking our ship like cannonballs. 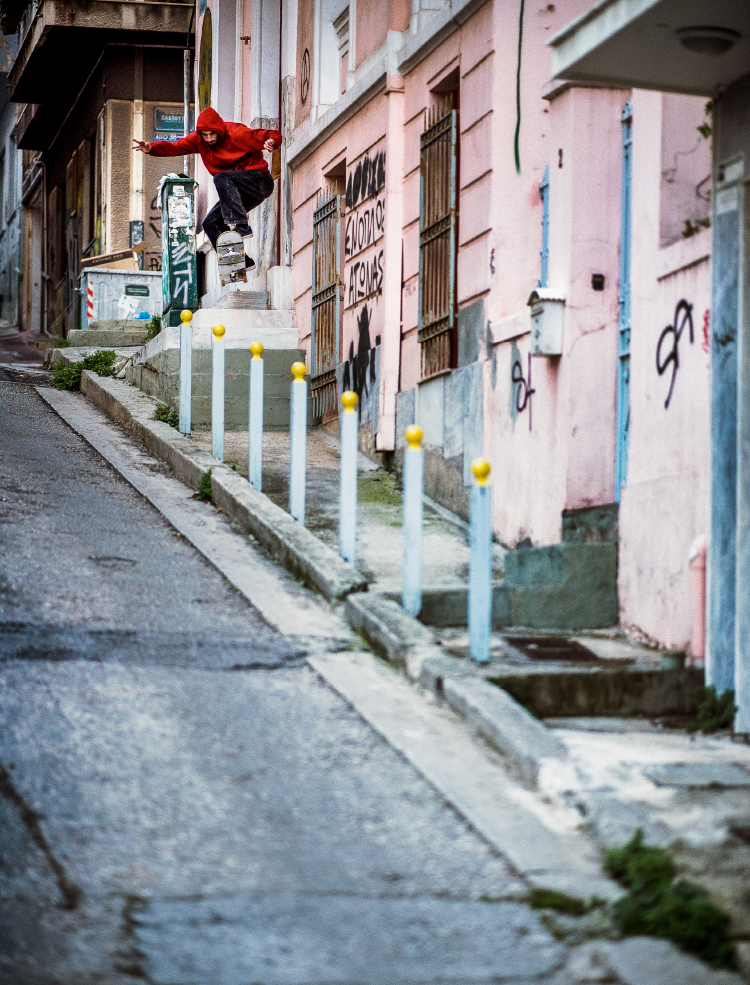 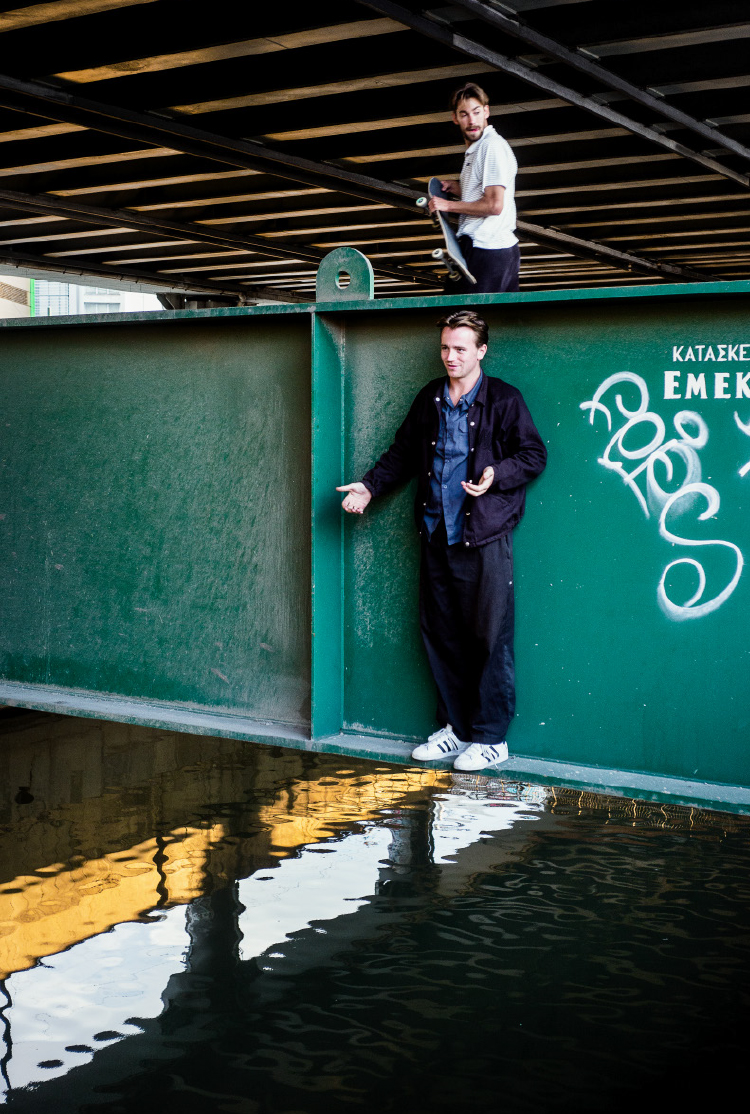 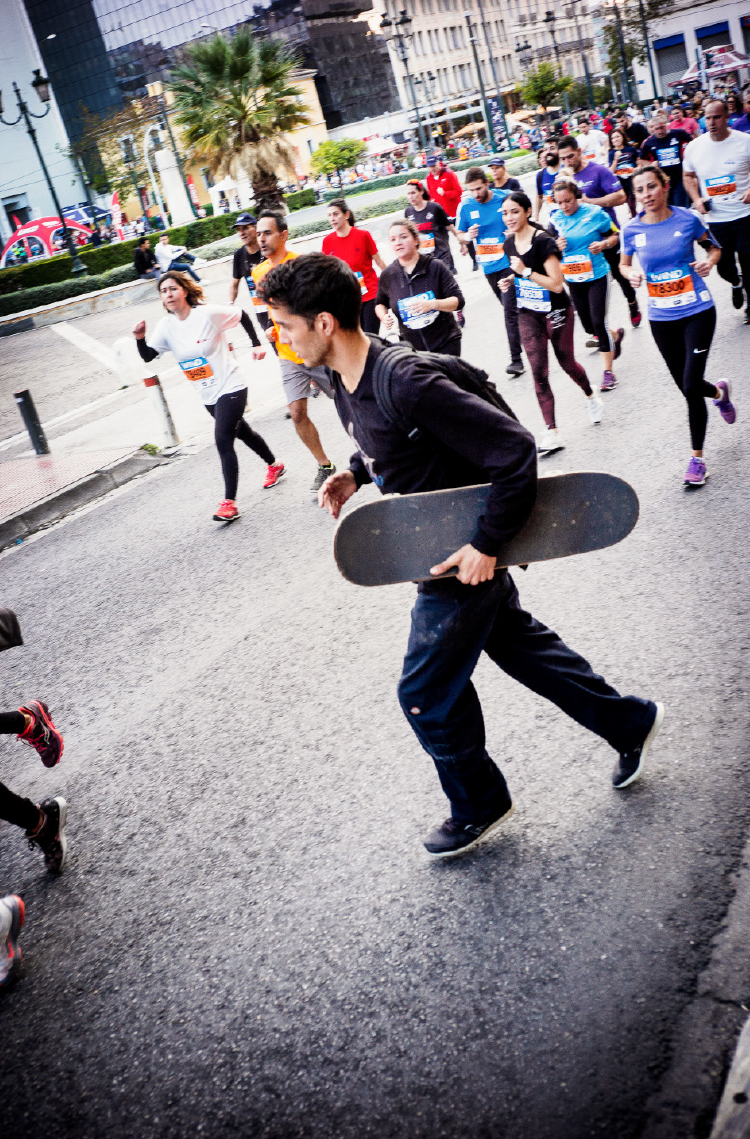 What we’d missed about doing trips in Europe was pushing around. In two weeks you get seriously good at just being on the street, waiting and kicking things for fun. The official story was meant to be that Sylvain hurt his ankle skating but the truth is far from that. We spent too long at one spot and Sylvain tried to boot a beer can off of a metal pole to keep himself busy—he missed, or he didn’t miss but hit the pole with his ankle and I just got an email from his wife describing his foot as “still buggered.” This was in November, poor schmuck. It happened shortly after we accidentally wandered into the Athenian marathon, an event based on the myth of the original marathon which apparently happened in history, which you can look up if you want. Anybody who’s ever tried to cross the street during a parade or any other similar road display will know roughly the feeling; so once we were caught in the flow of the marathon it was tough to escape and tougher to endure the jeers and boos thrown at us for haplessly invading what is quite a serious affair. Some people were kind of stoked, though. 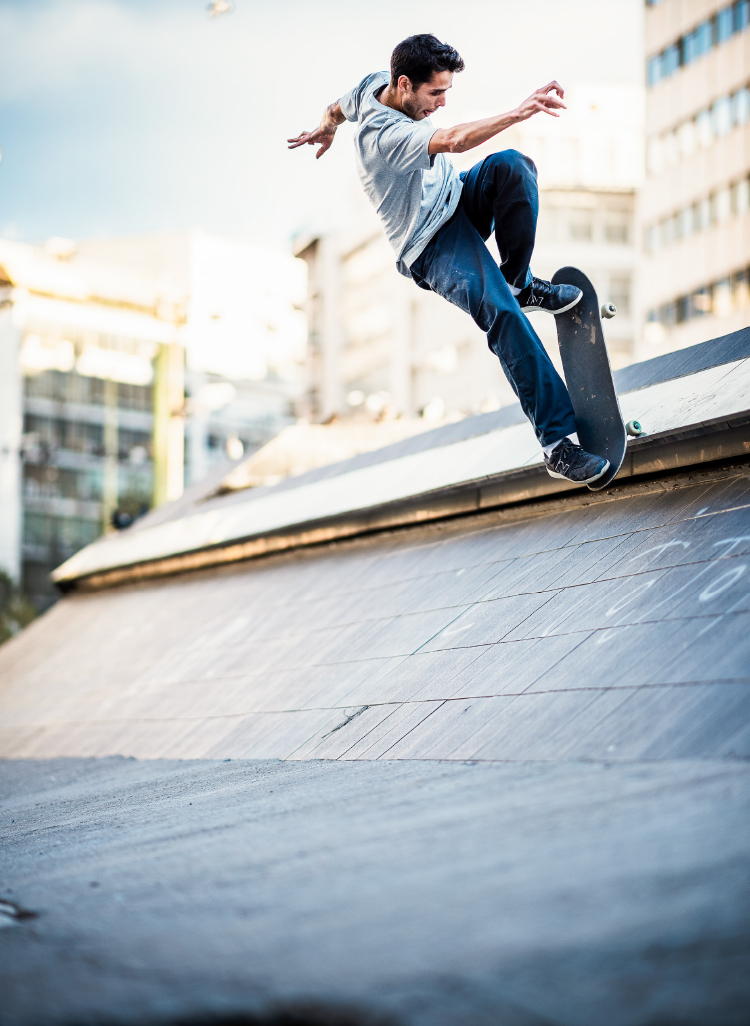 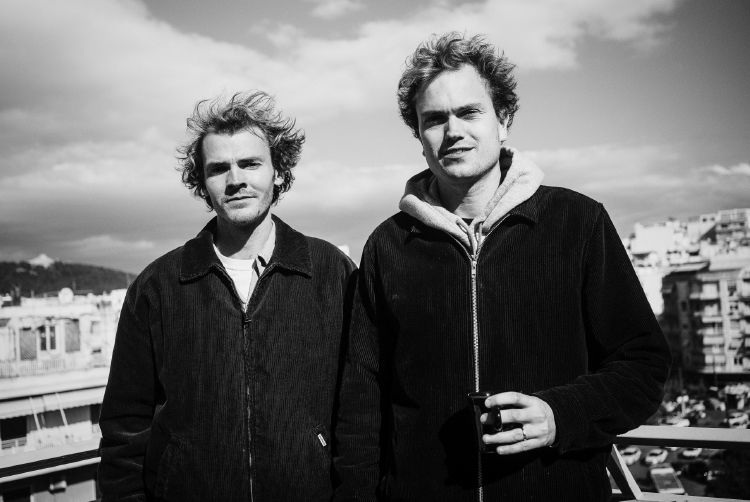 Our tactic is usually to book less people into the Airbnb than are sleeping there to drive down costs and drive up walls and this is almost never problematic. It was, this time, problematic. An American ex-pat called Basel (pronounced bay-zul) who ran the place lived in a small windowed box on the roof terrace and he would patrol his tiny kingdom making sure we were not fucking around. Luckily for us we could magically transform 11 large men into the illusion of just eight using the bodily coincidences of Mike Arnold looking exactly like Casper Brooker, Max Palmer looking exactly like Nick Jensen and Tom Knox looking exactly like Rémy Taveira. Though this has all been pretty organic, I sort of picked these people and willed the group into the shape it is now in and it makes me wonder whether, in a similar way to how you’re supposed to go for girls that look like your mum, I have these male face types that I’m subconsciously attracted to and what that might mean? It would make total sense if I didn’t hate every one of them. Worthy of a mention—the man Chris Cole, of Monster sweatband fame, had been sleeping in this apartment with the rest of whatever the GoPro team is only a month before we showed up and the guy I was just talking about seemed pretty hyped about the whole thing. In fact, I’d like to ask Chris whether they picked up on the fact that this guy was blatantly having an affair with the property manager in his tiny little box on the roof? He didn’t have the guts to just be brazen about it though he clearly wanted us to have some idea it was going on. In hindsight, we should have blackmailed him. 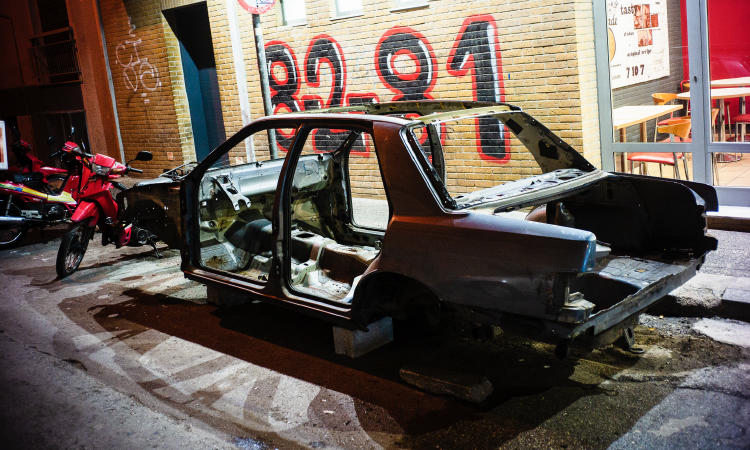 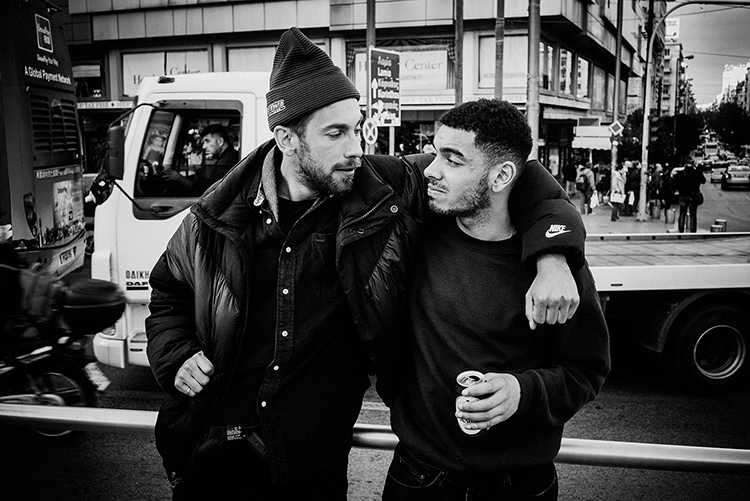 Athens is almost like a European San Francisco in some parts; it’s hilly, the locals are all quite gnarly and there are salads everywhere. The Greek post-war economic miracle means that it’s full of really high-quality white marble, so we have this mix of raw crusty materials topped off by what seems now like a reckless opulence. It’s exactly like a warthog in shiny Armani dress shoes. But it’s fun and exciting and there’s a good reason it was one of the top skate destinations about five years ago. I have to thank Thanos and mainly Nestor to whom we are greatly indebted for their help in showing us around. I’m sure between them they’ve all done all of the tricks in this article already but I think we had some kind of understanding that that might be okay. Right? 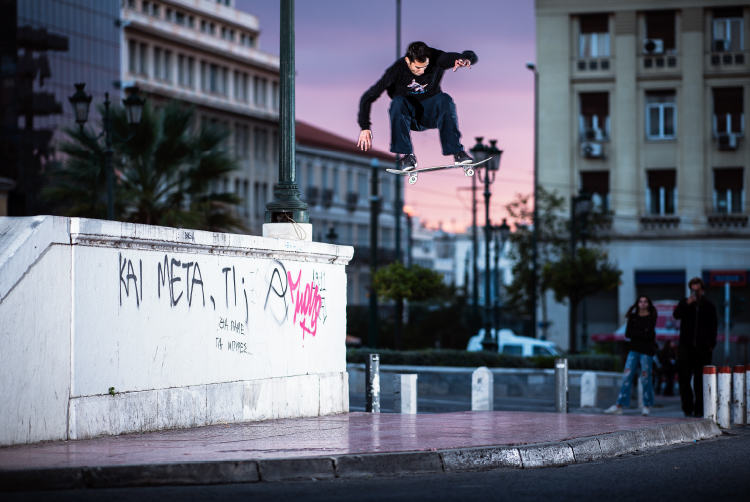 Tom switch ollied this gap approximately three seconds after landing a fakie 50-50 and then rode off into the Aegean sunset. ’Til the next Drift…