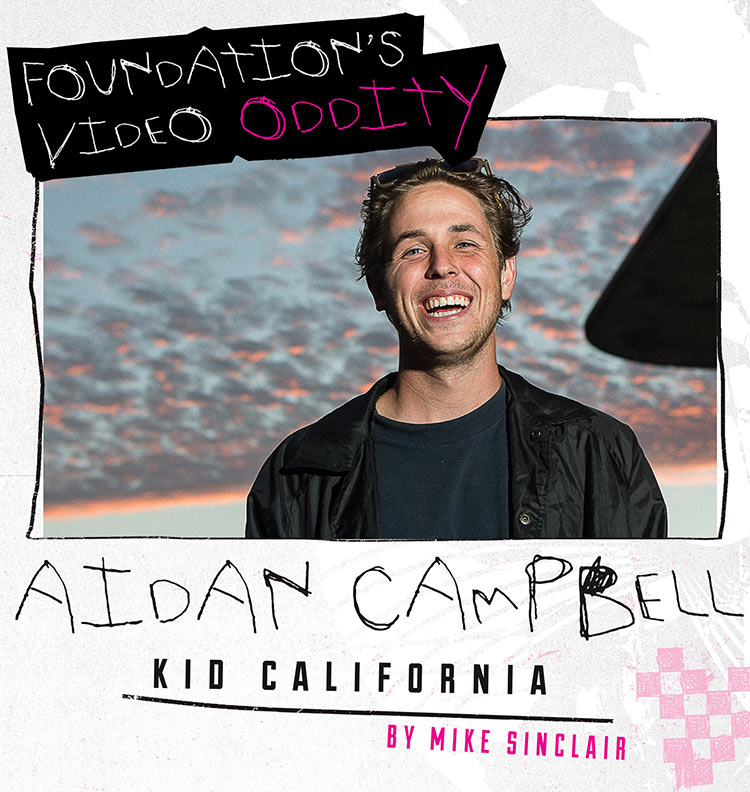 What’s up, Aidan? How was Christmas and shit?
It was tight. I just went down to my parents’ house and hung out for a couple days.

I probably know you the least of the dudes on Foundation, wouldn’t you say?
I would say so, yeah. We haven’t been on too many trips.

We haven’t been on no trips.
Yep. Oh, we went to Vegas.

I guess that counts.
Yeah, we never really been too far. 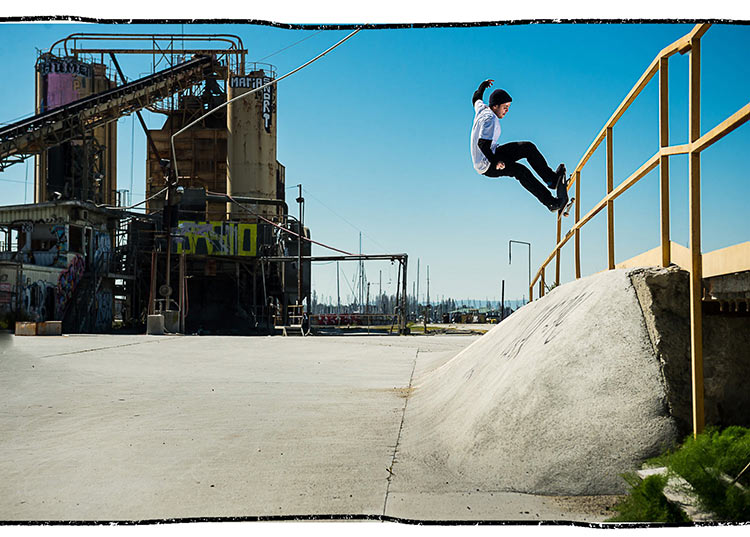 Aidan goes top rope at a spot you'd only find if you're out there scouring. Smith grind in the wasteland     Photo: Zaslavsky

How many trips did you go on filming for this video? We went on one Foundation trip. But how many trips have you taken yourself or with some of the other guys to put this part together?
I’m gonna say four, I think. I went out to SF a bunch of times, went to Duffel Land. I’m gonna say about four.

Four trips and two of them were to Duffel Land?
Yeah. And then Vegas and then we’re gonna go up to Sac on the third of the month.

Oh yeah. And you went to Chicago.
Oh shit. Yeah, I did go to Chicago. 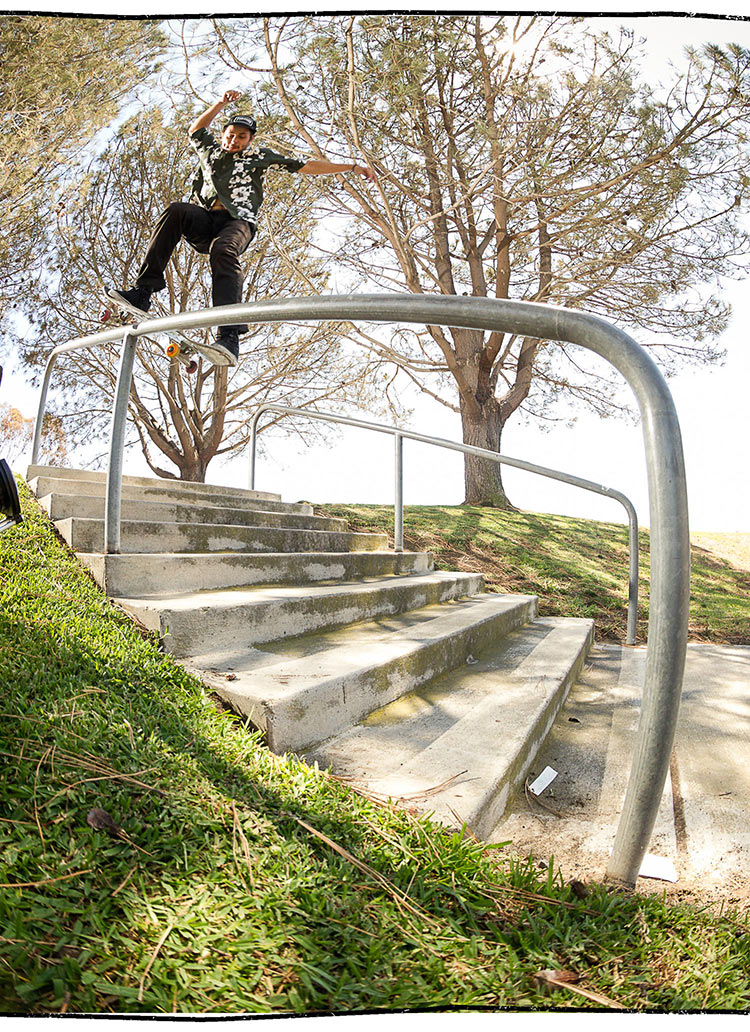 His shirt was screaming "5-0!" but Aidan flipped the script and went Barley grind    Photo: Karpinski

I’m psyched too. All of the stuff I’ve seen has been really good and I think people will be psyched to see it. Because this will be your first part for Foundation, right?
Yep, besides the welcome part.

Is this your first full-length part in an actual skate video?
Yeah, it’s my first one in a video and I’m really psyched about it. Because I feel like growing up that’s all I saw and I feel like right now it’s kind of dying, videos themselves. It’s all Internet stuff so I’m super psyched to actually get in a full-length video.

So after this video drops we’re gonna drop another one next holiday, so be ready.
Another full length? 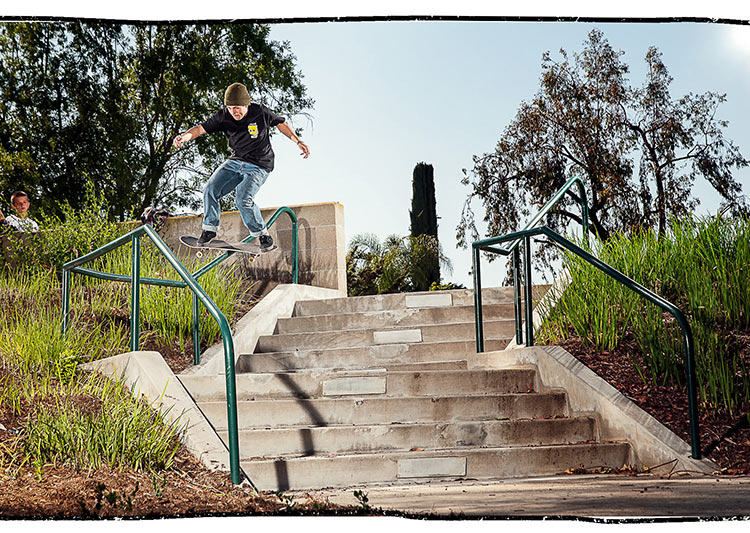 Looking a little short in the neck department himself on this one, Aidan works the corners on another secret spot     Photo: Lisch

No, it’s gonna be a different style video. It’ll be a full team video but it’s not gonna have nine parts, you know what I mean? So then the Etnies video, tell me a little about that. When is that supposed to come out?
I haven’t heard any deadlines yet but we’ve been filming for quite a while now, like a little over a year. It’s their first video since High 5, so everyone’s super stoked that that’s coming out. We got a cool team, you know? And all the stuff that I’ve seen so far is really,  really gnarly.

That’s rad. He’s smooth too. I like him.
Me too. One of my favorites.

And he’s part of the crew. He’s always out with you guys.
Oh yeah, he’s always out. He skates really cool new spots. 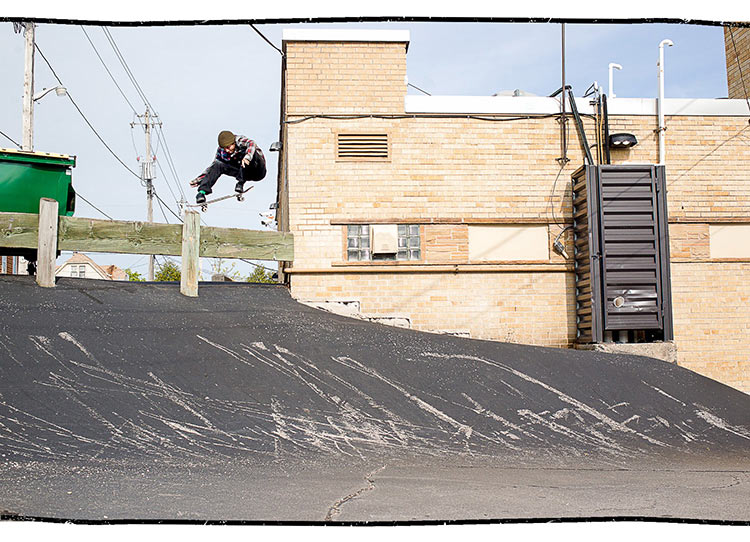 How did it feel to finally move out of Rancho Santa Margaritaville?
It’s dope. I love it. A lot more going on than in that place. It’s very slow over there.

It’s a good place. That’s where you met Dylan Witkin, right? You and Dylan are childhood shred buddies?
Yep, we grew up skating together.

Were you guys Etnies skatepark babies?
Yeah, when I first started going to the Etnies park he was there. He was so gnarly.

So you and Dylan are just Etnies babies? Skatepark babies or what?
Yeah, he was a bit older than me but when I first started going to the Etnies park he was the dude, you know, that you’re always kind of scared of because he was so gnarly. He was always the guy, like, “Oh fuck, I don’t want to mess with this guy.” 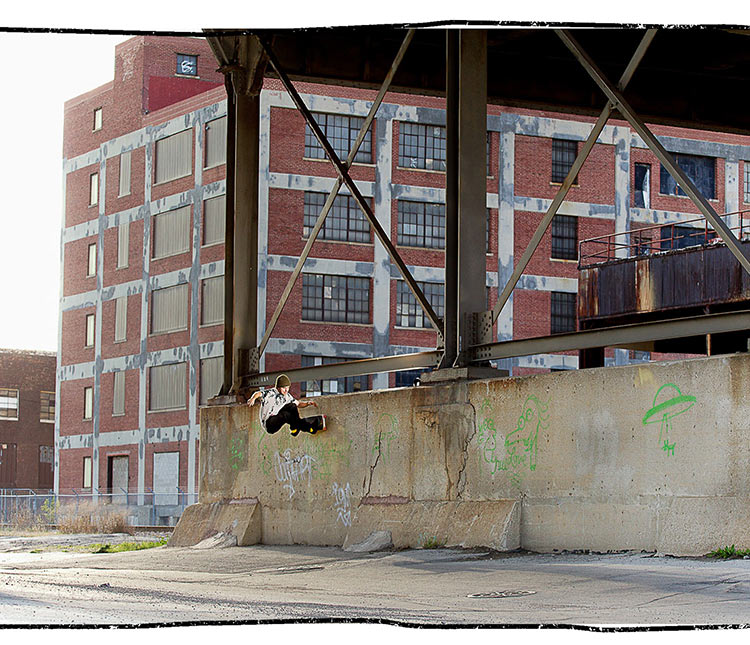 While the city crumbles around him, Aidan breathes some life into a long-distance waillride     Photo: Karpinski

He was gonna be on Foundation back in the WTF days but Dakota said he didn’t have a neck so he didn’t like him.
Yes, he did. And I told him, “Once you skate with him, he’s insane.” But he didn’t believe me.

Then Dakota brought Dylan’s name up to me a couple years later and I was, like, “You idiot! I told you he was good. Why didn’t we put him on back then?” And he goes, “I don’t know. I think he grew a neck.” So his neck grew and then he got on Foundation.
He was getting Foundation boards before I was. I’m glad that he grew a neck.

Okay, what about the Skate Loco video? When is that coming out?
That actually already came out. It came out a couple months ago. 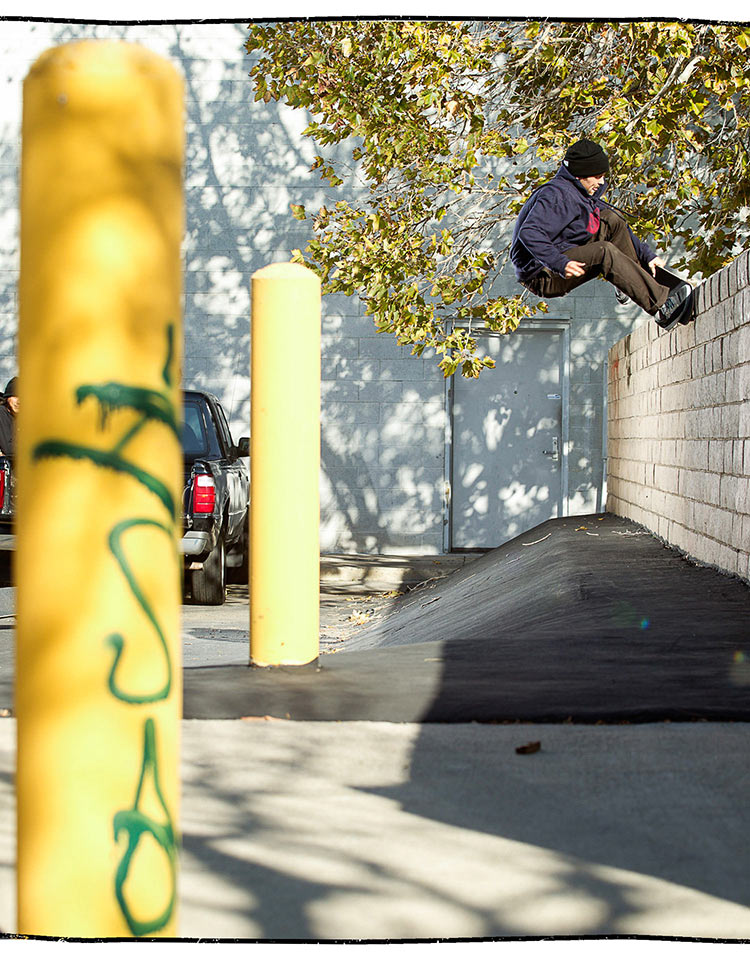 Luckily for his karaoke audience, Aidan saves the nosepicking for the streets    Photo: Karpinski

How did I miss it?! I didn’t get an invite to the premier?
It was on Instagram. I posted an invite or the flyer.

I didn’t even get tagged. That’s fucked up, dude. I can’t even get an invite or a tag these days.
No one went out of the bros.

That’s alright. I’m sure I’ll catch it. So I’ve been checking up on you guys secret style on Instagram and Snapchat and instead of lighting up spots, you guys are lighting up the karaoke bar. What’s going on?
Oh, man, yeah. I went to karaoke for the first time the other night. 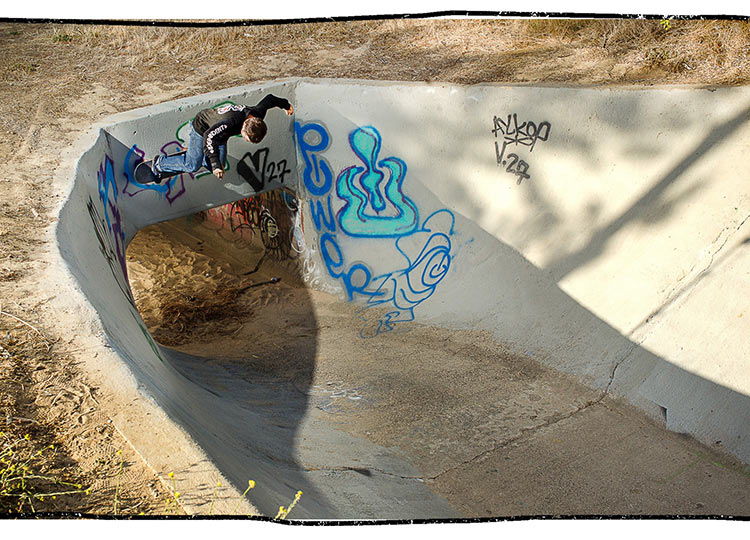 When the Etnies park closes Aidan finds his carve in the wild. Over the whole hole     Photo: Karpinski

What’s your go-to song? What gets you sparked in the karaoke bar right now?
Macy Gray.

And what’s her hit song that you’re always singing?
I Try.

Let’s talk about your parents: so you were born here, right?
Yeah, I was born in California.

But your mom and dad both have full Scottish accents.
Yep. Full Scottish. They were born and raised in Scotland.

How’d they end up in Rancho Santa Margarita?
They were traveling around the world when they were younger and they came to California on vacation and then they just ended up staying. And that place was pretty cheap at the time. It was just being developed. There was nothing around it and so they got a place and then eventually got their citizenship.

How come you got no Scottish accent?
I don’t know, man. That’s a good question. My babysitter was also Scottish and none of my brothers or sisters have an accent either.

Can you fake a good Scottish accent right now?
Dude, I seriously cannot for the life of me. I would love to, though.

Did your dad or your mom skate?
No, my dad played soccer. They never skated in their life.

And no brothers or sisters that rip?
Nope. My brother surfs. I’m the only skater.

Life's a ditch and then you fakie hurricane revert. And then you die    Photos: Zaslavsky

What’s been the biggest hurdle filming for Oddity?
Finding spots in Southern California.

Who’s impressed you the most filming for the video?
Fuck, man. Cole. I’ve never seen rails grinded the way he grinds them.

It’s insane, right?
It’s fucked up, man. It’s a whole new way of skating. You’re at the top of the rail and you’ve got to remember he’s coming up the rail, you know?

The first time I ever saw him skate I was, like, “That’s the next pro on the team.”
I had never heard of him or knew him and then all the bros were talking about him so I was, like, “Well, he has to be gnarly. Everyone’s super down for him.” And then lo and behold he’s the gnarliest dude ever.

And he’s cool too. He’s not like some weirdo that we picked up and forced onto the crew.
Yeah, he fit right in. He’s like one of those dudes that you feel like you’ve known forever. 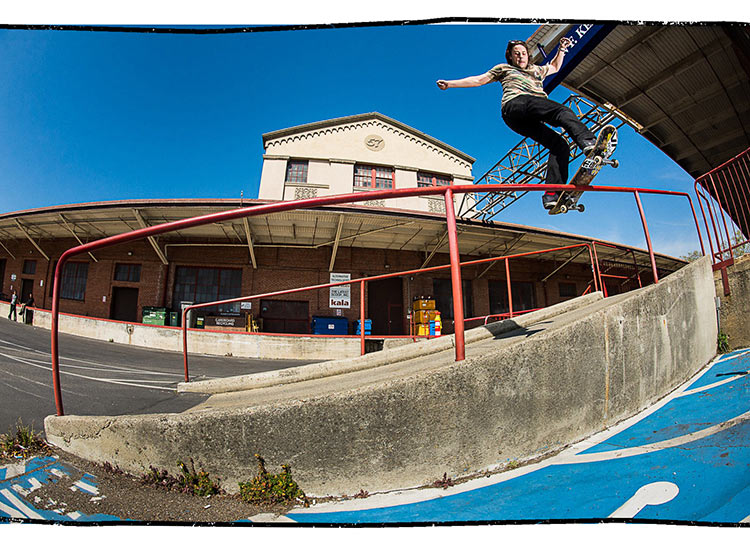 He's half Scottish but Aidan would rather put the squeeze on a long-ass front board than a bagpipe. Good choice, kid    Photo: Zaslavsky

I’m stoked we got him on the squad. I’m stoked on the whole crew and I think that Foundation has an amazing team right now. Who do you think is gonna have the best part in the video?
I’m gonna say Glick. New age.

Glick’s stuff is heavy, man. He can do everything.
Super fucking heavy. He’s also another one that I’m, like, I haven’t seen people skate like that before. That new age stuff.

He’s got those young joints.
Yeah. Always stretching. He’s gonna have a good well-rounded part. He’s been expanding his skating, I think.

What do you think is next for video parts? Because you said everything is on the Internet and this video actually has a part from everybody in it, but
what do you think is the next thing for team videos?
I think they’re gonna be scarce until they’re not even around anymore. I mean, kids just want Instagram stuff nowadays. I feel like they can’t wait the way we used to wait for videos when we were younger. 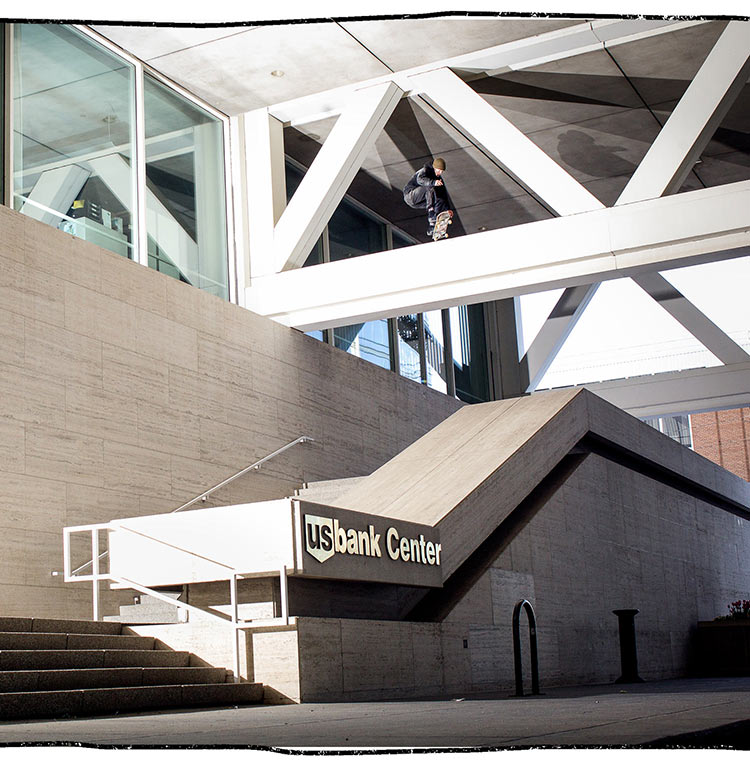 You think this shit just drops right out of the sky? Nah, he worked for this roll-in. Midwest death drop after sleeping on the floor     Photo: Karpinski

They don’t read. They just want it and scroll right by it. Hopefully something will come about where we can showcase our footage and it’ll last for people to be psyched forever.
Good skateboarding will last forever.

I can’t wait to see your part. Who do you think the next pro is gonna be on Foundation?
I’m gonna say Glick.

A bunch of people are saying it’s you. Is it gonna be you?
I don’t know about that, Mike.

Alright, man. Well, thank you and thanks for representing the F. We’re stoked to have you.
Thanks for having me on, Mike.