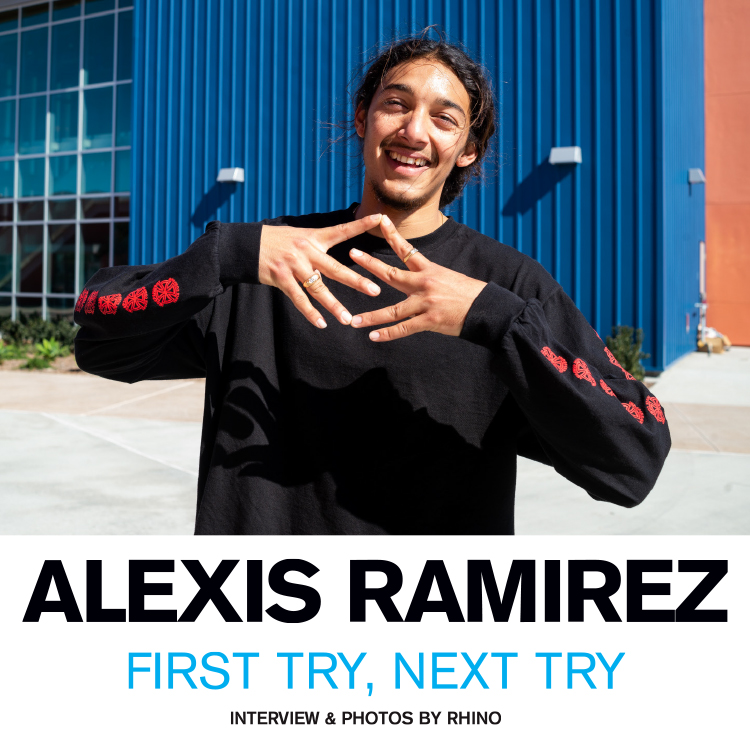 Whats up, Alexis? Let’s get this interview going. How old are you and where are you from?
I’m 21 years old and from Chula Vista, CA, part of San Diego.

I heard your mom named you after her favorite singer?
Yeah, she named me Alexis Ayala, after a Mexican singer that she likes.

It’s not a very common name but it goes smooth with your last name.
Yeah, I like it. She thought the name was really beautiful so that’s how I got it.

How did it all start? When did you get your first skateboard?
I started skating when I was eight years old. Two of my brothers skated.

Do you remember what kind of board it was?
The first board I tried was a Zero board which was my brother Eddie’s. It had a skull and some blood on it for a graphic. 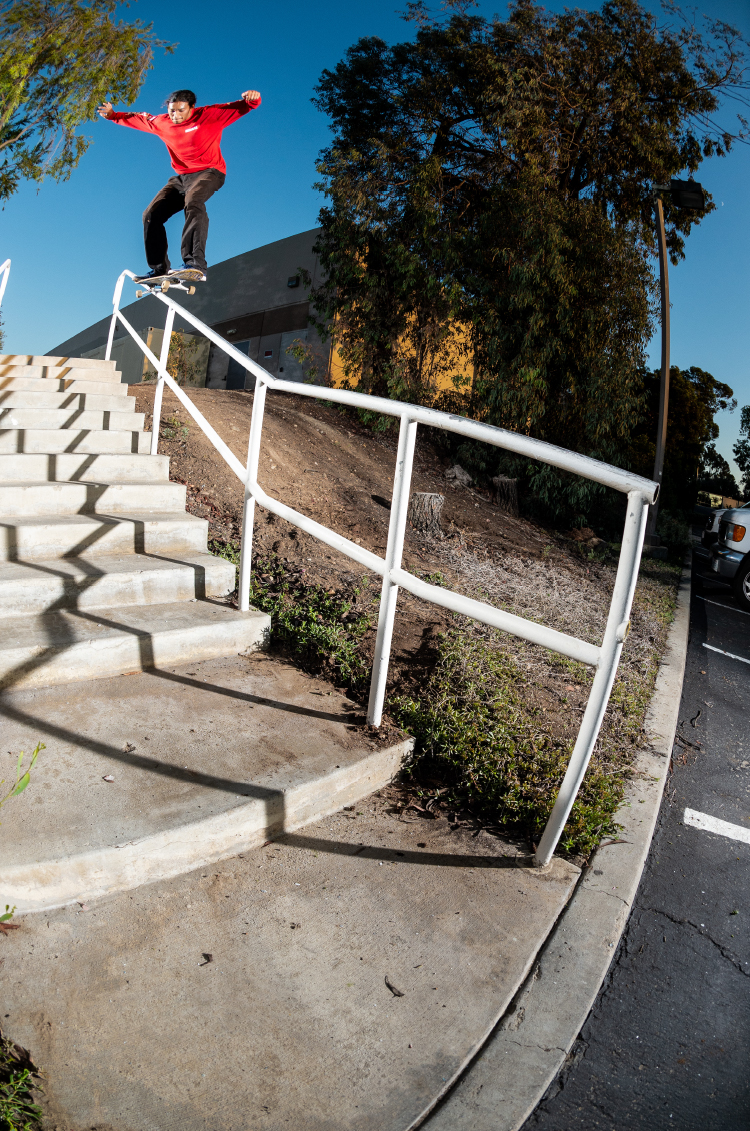 Doing his namesake proud, Alexis makes this rail sing with a backside 5-0

Blood and skulls on anything will get you hooked right away. Were your brothers really into skateboarding or were they just cruising around?
They were starting to get into it, ollieing stairs and trying tricks. My other brother Kevin got one just to roll around on and get to school. Then my brother Carlos got a board and I always wanted to do what he did so I ended up getting my own skateboard.

Do you remember what kind it was?
It was just some crappy complete we got at Walmart or somewhere, but I had my own board to ride. 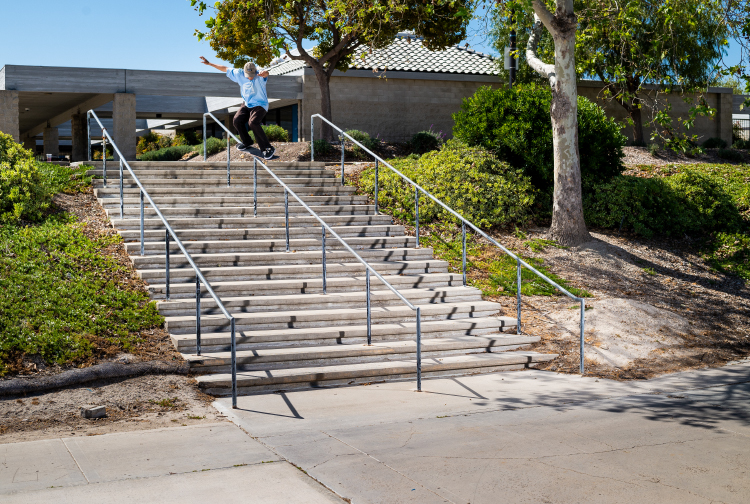 Twelve siblings and 17 stairs, nothing is small in Alexis’ world—feeble

I heard that you learned how to kickflip the first day you got your own skateboard.
Okay, I thought that’s what happened for the longest time. I hadn’t talked to my brother Carlos in a long time but I asked him recently and he said I learned to kickflip within a week on that complete I got. He showed me how.

So it wasn’t in one day; it was within a week. That is still amazing. Fuck, I’m still learning to kickflip! Then what happened? Did you start looking at magazines and watching videos?
I think that took awhile. I didn’t know too much about skating. I would just skate all over the place with my brothers and their older friends. Then after about three years I started watching a lot of videos on YouTube, every video I could find.

Did you ever see any famous pros around that time?
Yeah, I started seeing Tommy Sandoval at Chula Vista Skatepark. I grew up in the same area as him. I had seen New Blood and some of the other videos he was in so I knew who he was.

Did you ever talk with him back then?
Yeah, he used to invite me to Black Box’s indoor park and pick me and my brother up to take us there. Tommy is sick!

Who needs a chiropractor when you can bend your own spine? Alexis gets twisted on a switch 180 to front feeble

Who else did you see around San Diego, any OG dudes or legends?
All the Mafia guys. I didn’t know them but they would always be at Memorial Park. They are all older than me so they are legends. Oh yeah, Brandon Turner! I saw the switch hardflip on the Carlsbad gap somewhere and didn’t even know who he was then. Now I skate with him and he is still so gnarly!

What about Jason Carney?
I heard about him when my homies were trying to get me to skate for his shop, Slappy’s. I met Jason and I didn’t even know ’til later that he skated and was the first dude to back lip a handrail. He also skated this gnarly rail at my high school back in the day. I was blown away.

You just thought he was some old dude who owned a skateshop?
Yeah, but he was always sick and helped me out. One of the nicest dudes ever. 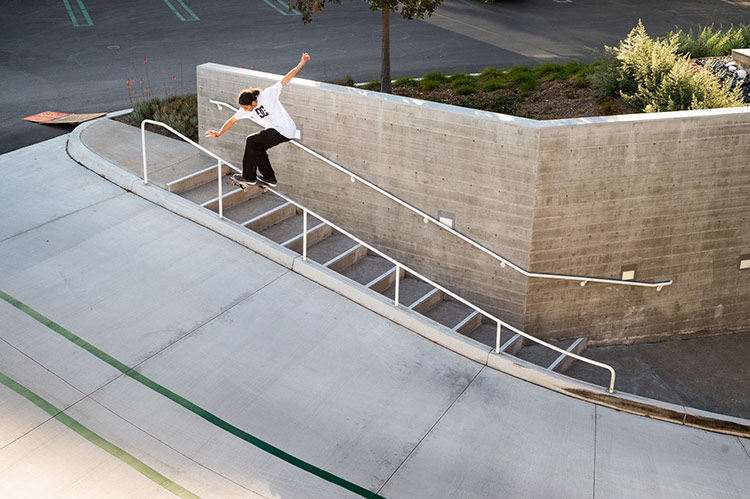 How did you get hooked up with the Sk8mafia?
Cuong Lieng, who used to be the Osiris team manger, helped me out a lot when I was younger. He would pick me up and take me to spots and film. He would tell me I needed to skate faster and to stop doing certain tricks because they were wack. I listened to him. Once I got some footage stacked up with him he said he would send it to Dan at Sk8mafia to see about getting me some boards.

When was that?
About seven years ago. Dan called my house one day and my mom answered the home phone. I didn’t have a cell phone then. She was, like, “Dan is on the phone.” I was, like, Oh shit, Dan from Mafia is calling. So that’s when I started getting flow from them. 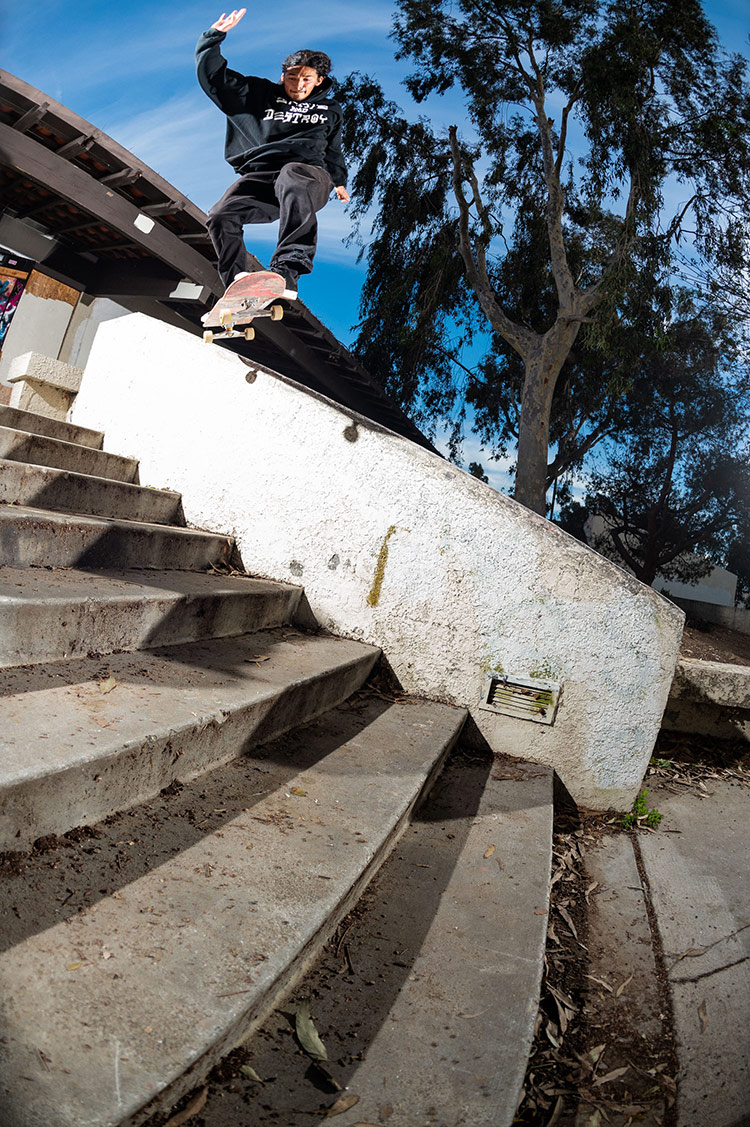 Cab to back tail, definitely not wack

What about Nick who you grew up with that rolls out on every session?
I grew up skating with him and he ended up getting into some shit being a little G in the hood. He ended up getting locked up for awhile. Once he got out we just started skating together again. Now he just skates and stays out of trouble.

He always hypes up the session, right?
Yeah, he gets people hyped up to skate and always has a banger ready for when someone lands a trick. He came up with the phrase “first try, next try,” even if you have been battling the trick for an hour.

Did you and Nick used to get into trouble growing up?
We did do some hoodlum stuff when we were younger—throwing rocks at cars, trying to do some damage here and there, nothing too serious. We were just young and dumb.

Did you ever get in trouble with the cops?
No, but one time I spray painted on someone’s new white car right by my house. Then not too long ago someone broke my window on my new car and all I thought was I’m a dumbass. I did that to someone else and now they got me. I wasn’t mad at all.

Karma came back and got you.
Yeah, that’s why I try to be positive and be nice now. Way better to be happier than mad. 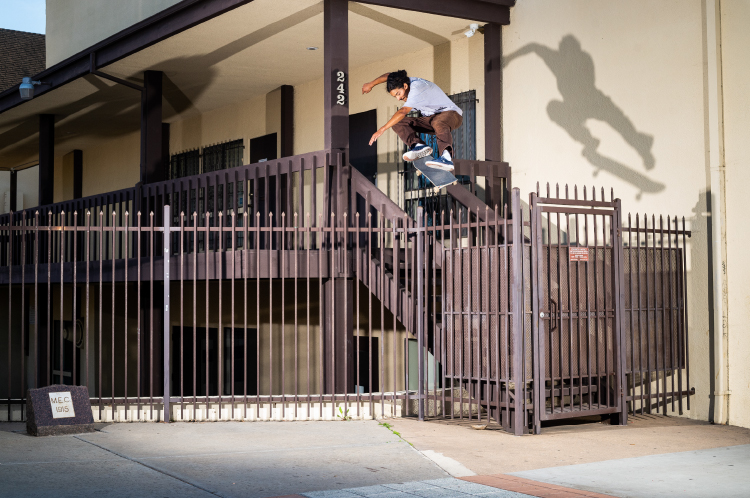 Tweaked kickflip over the spikes. Get that banger ready, Nick

When I met you a few years ago you didn’t drink or smoke. I was kind of surprised by that. When did you start smoking weed?
When I was in Barcelona about three years ago. I tried it when I was younger but it always made me paranoid. I was only 14 and I knew I was too young to start smoking weed.

So what happened in Barcelona?
Just hanging out with the homies and rooming with Wes. I started a little bit there at night to relax, then got a little more into smoking throughout the day and my tolerance got higher and then I could skate while smoking. Once I started building up a little more of a tolerance it would calm me down when I was trying some tricks.

So I am going to have to say Wes was an instigator on this one, right?
Yeah, maybe Wes had something to do with it

What about drinking?
I have drank before and got hella faded, started throwing up and feeling like shit. I just thought, I hate this. Why would I do something to myself that makes me feel like shit. I would just rather smoke and have a good time. 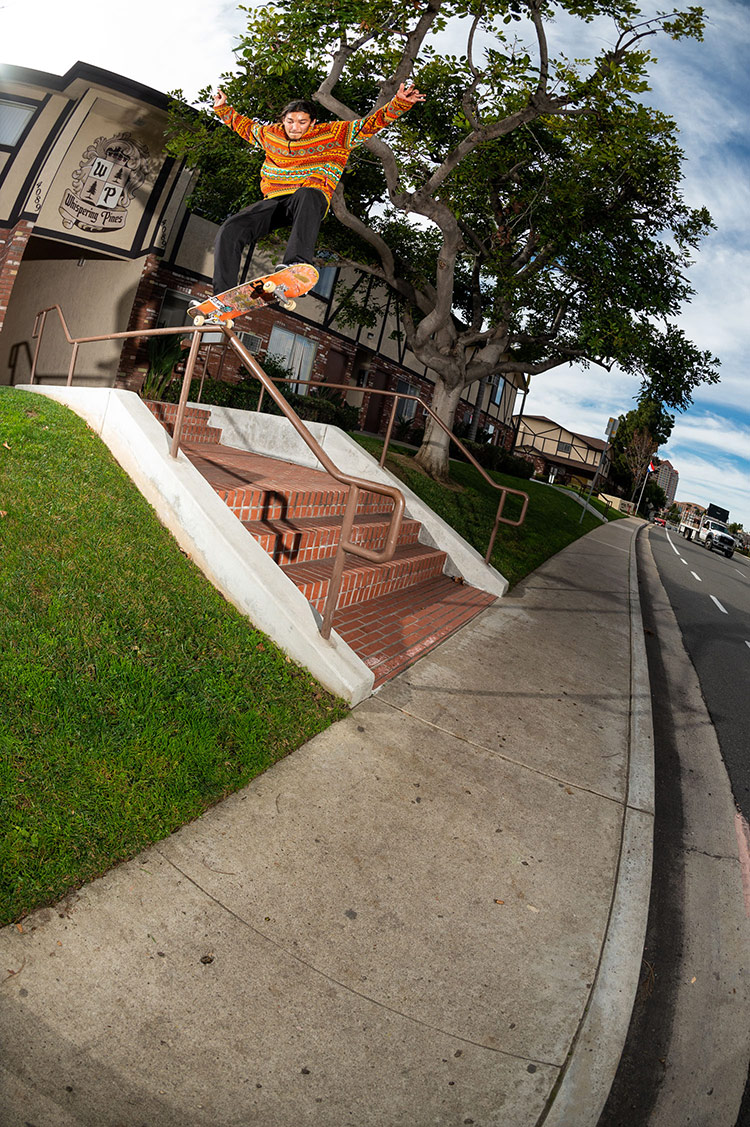 Alexis’ 50-50 gap out to the street is way sicker than vomiting booze. Healthier, too

What would happen if the Olympics called you up? Would you quit smoking?
No, I don’t think so. I thought about that before and I think that’s lame. Maybe I could get a doctor’s note, but they don’t want that because it enhances your skating. Ha!

You have a DC shoe colorway coming out, right?
Yeah, it’s coming out in a few months.

They have a good squad right now. Who are some of your favorites on the team?
The team right now is so sick—Funk, Wes, Evan, Tiago, the whole team.

Have you been on a trip with Tiago?
Yeah, he is the sickest—really humble, smokes bangers and he is fun to chill with. Then you roll up to some spot like a massive ledge and he just kills it. He has a good-ass flick and the sickest style. Baggiest pants, so G.

So what’s next? What else are you working on?
Right now I am working on a DC/Sk8mafia collab part for the colorway. I’m just trying to skate every day.

Do you have any goals in mind?
A dream would be to get my name on a skateboard. I would be hella hyped to show my mom.

Whenever that day comes, you got any graphics in mind?
No, haven’t even thought about it.

Just have you smoking a huge banger on the bottom of the deck for a graphic and hand it over to your mom.
Ha! It could be. My mom loves me so she would have to like it. She used to rock a “Laced the Fuck Up” sweater of mine and wear it to the store and picking me up at school, so why not?

Did you graduate from high school?
I knew you were going to ask that question. No I didn’t. 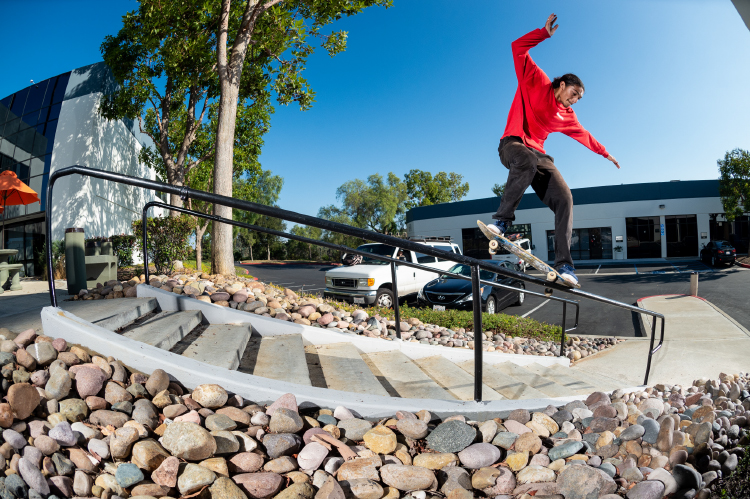 How far did you get?
I made it to 11th grade and dropped out.

One more year is all you had left? How come you didn’t finish?
I was hella behind on credits. I actually had probably three years to go. I would go to school and all I would think about was getting out and filming tricks so I wasn’t even learning anything. I did want to finish to make my mom happy. Every mom wants their kid to at least finish high school. I told her that I just wanted to skate and I wasn’t dropping out because I was getting in trouble or anything.

Did she understand?
Yeah, she did. She supported my decision to drop out. She just wants me to be happy.

You can always go back and finish when you have some time.
Yeah, I definitely want to for myself and for her.

Every mom’s dream is to make sure her kids are happy, right?
Yeah, that’s all they want is for you to be happy.

That’s a wrap. Let’s end on that.
Cool, can I thank a few people?

For sure.
I would like to thank Chi Hom, Cuong, Dan Connelly, Jimmy at DC, Preebs, Izzy, Jason Carney, Rhino and all the homies and my mom. Get out and do the best you can and always have fun skating. 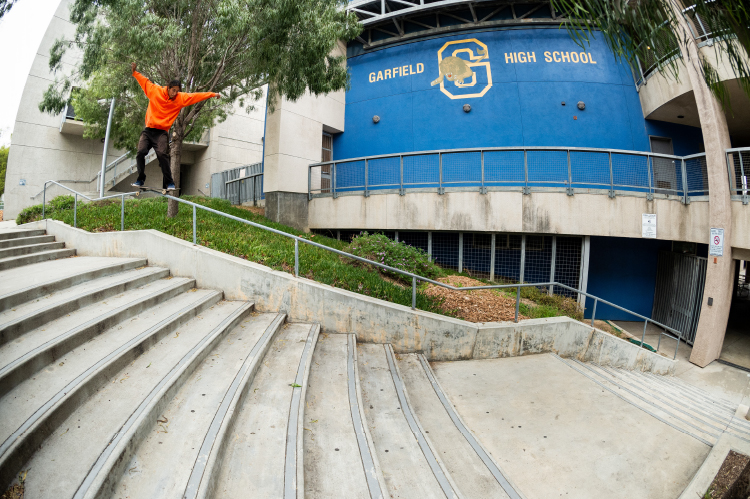