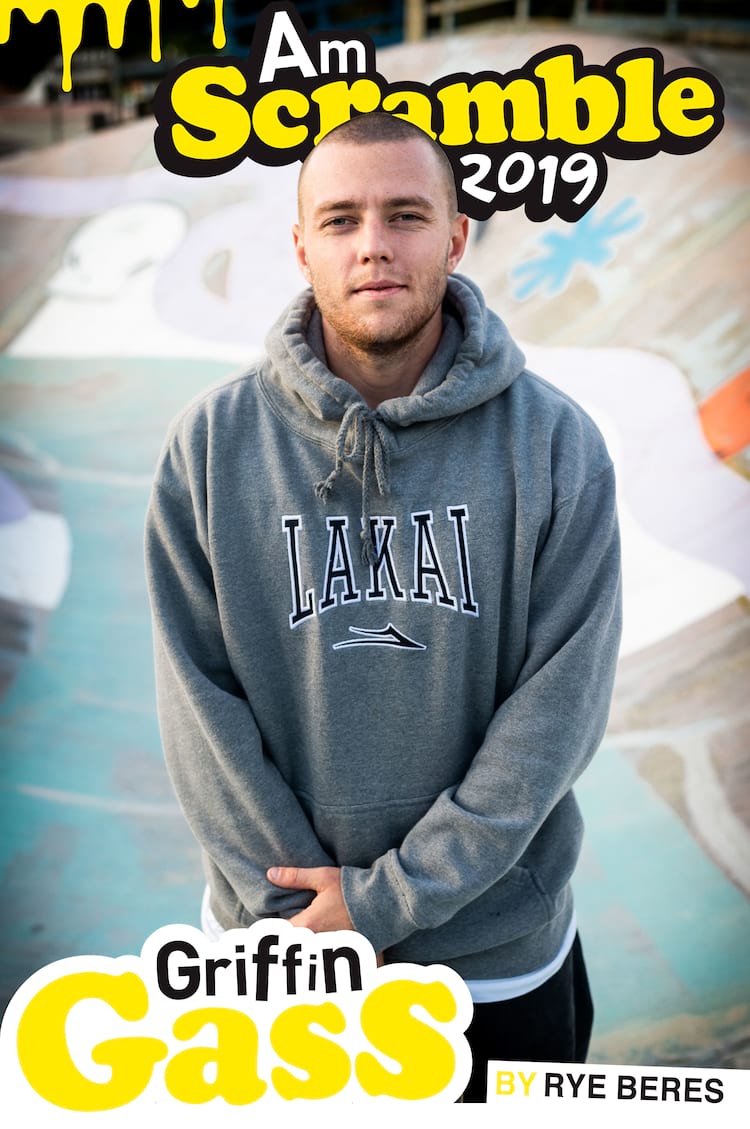 GRIFFIN GASS IS A CLASSIC STREETSTYLE POWERHOUSE—a skater who can push through the downtown of any city and find a hundred different things to rip, all at top speed. Hailing from Seattle, his parts for 35th North and Girl established him as one of the heaviest ams rolling. We were stoked to get him in the van.

What’s up, Griffin?
Nothing much, going to get bed sheets and run a bunch of errands and shit. Classic Monday.

What was your initial thought when you got invited on the Am Scramble?
I don’t really skate handrails like that.

In the sense that in the past the Scramble has been heavy on the rails?
Exactly that. But I was hyped when they asked me.

Do you think in years past the Scramble has gained a gnarly reputation?
I mean, yeah. You’ve seen the footage. It’s pretty gnarly.

Did you know anyone before going on the trip?
You, Burnett, Stolling and Breezy. I wasn’t really tight homies with anyone. I knew Jesse, too, being from Seattle. 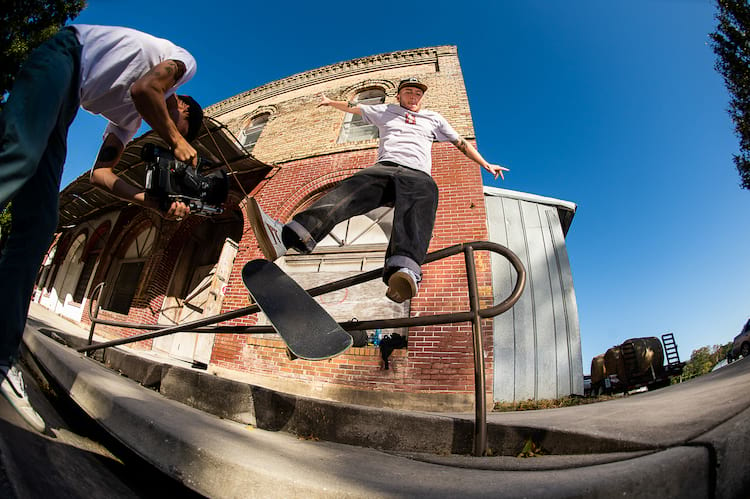 Keeping up with Gio and Jack, Griffin's got his own way of destroying rails

Was there anyone who you were like, Whoa, this dude is gonna come?
Probably Giovanni.

Who on the trip surprised you the most?
Jack O’Grady. Not even surprised, not saying I didn’t expect him to be gnarly, but seeing how he does shit firsthand was really wild. He just flips the switch.

Was this your first time going on a skate trip with a girl?
I went to Canada on a Girl trip and Breana met up and skated with us, but she didn’t fly out with us so I’m not sure if that counts. But it kinda counts. I knew Breezy before but we never kicked it that hard. But this trip it was like me, Breezy and Jack just in the back of the van, so we got pretty tight.

Damn, so how was the back row? Looked epic.
It was the most communication. Everyone else had headphones in watching skate videos kinda on their own tip. But we were in the back kickin’ it a little harder, like playing cards and shit. 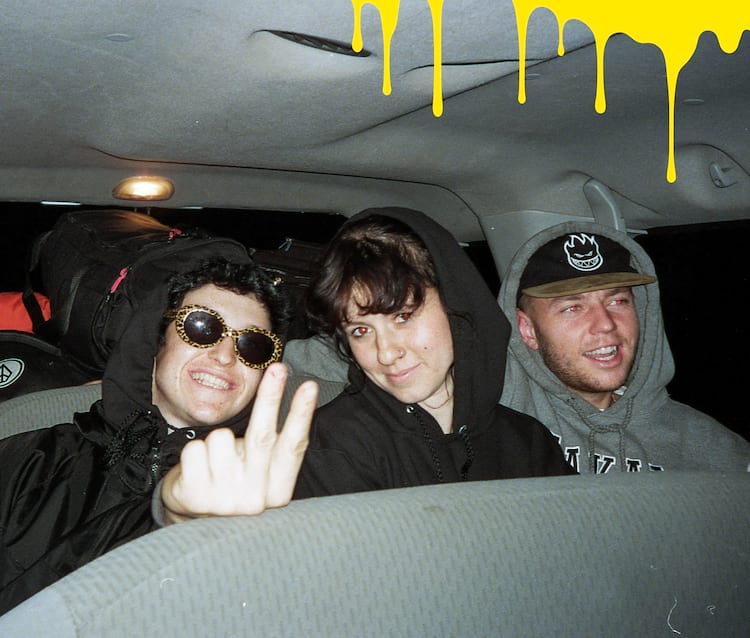 No headphones, just peace and love from the back of the van

Sounds like best friends just hanging on a skate trip.
Exactly, it’s not like everyone knew each other for hella long. But after a few days everyone warmed up and was super chill.

Do you think having everyone in one van helped the morale of the trip?
It didn’t get too fired up in the van. I think it would’ve helped if we were in an Airbnb rather than hotels. Hotels separate everyone where there isn’t really time to all decompress and kick it.

Even with the situation we had, everyone got together so well.
That’s what I mean—it would’ve just boosted it and made it that much better. But productivity-wise, hotels are good ’cause you aren’t up late with everyone drinking brews.

What are gonna be some memories you look back on from the trip?
A quote from O’Grady. So I asked him, “How did you get yourself to commit to that?’’

To commit to the kinked rail?
Yeah, and he said “It’s just life,” in all seriousness. That was gnarly. He really meant it and didn’t give a shit.

How insane was that grind on the first day? What were you thinking after that?
That I shouldn’t be on the trip.

I think everyone was thinking that.
I pretty much got hurt the first day and didn’t skate for the next six days.

The double set fucked your feet up, right?
Yeah, I pretty much got hurt without getting hurt. I felt pretty hurt though.

It’s gotta be weird as the skater to come on a trip like this where everyone is just getting it straight out of the gates.
It’s just not really how I skate. Like first day, I’m gonna pace myself on a ten-day trip. I’m not just gonna jump down the biggest stack, but it was like, Fuck, everyone is skating it. I should probably skate it with them.

That night in Gainesville when Aaron and Ish starting recording the Chick-fil-A song was pretty monumental. Do you think we should’ve eaten more Chick-fil-A to hype the song?
Nah, I’m not a huge fan. I mean, it’s good but I’m not gonna seek after it.

Most people were over going to Whole Foods every morning. Were you over it, too?
I was backing it. It’s the best move ’cause everyone can get what they want.

Well, even at home you’re a pretty healthy dude, making smoothies and shit at the house.
Yeah, I try to eat at the crib mostly.

Your last job was at Whole Foods, right? Do you still work there?
Nah, not anymore. 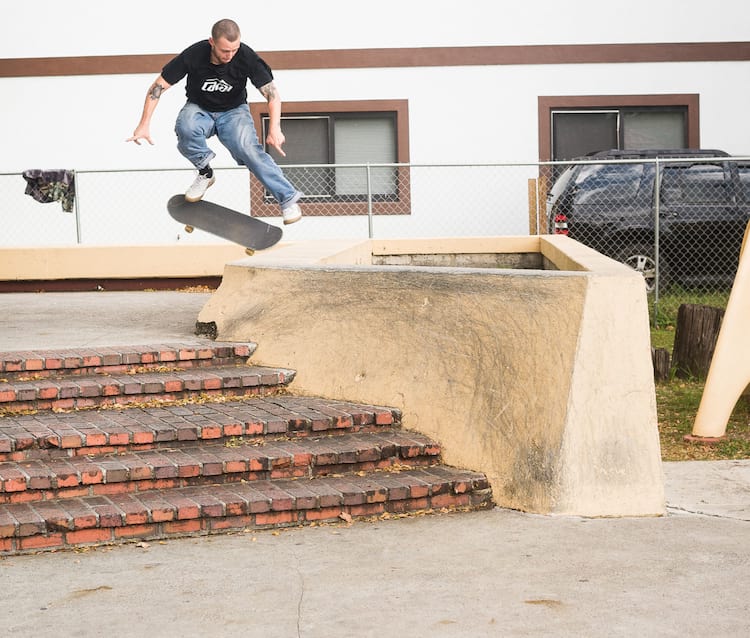 Was having a job motivating when going skating or was it like, Fuck, I don’t wanna skate after work?
Both. It was motivating but it sucked ’cause I wasn’t sleeping. I was just working all night and skating all day.

What trick of another Scrambler would you like to have?
Jesse’s eggplants, probably. Or just being able to comfortably skate tranny like that.

Did you make a strong connection with anyone on the trip?
Breezy and Jack. Aside from that, everyone seemed to get along super well.

I wasn’t on the past two Scrambles, but just from an outside standpoint it looked like everyone got together way more than in years past.
I think everyone was just really open to it like, We’re on this trip together. It’s also a long trip to be on with people you don’t know. Gotta make the best out of it. 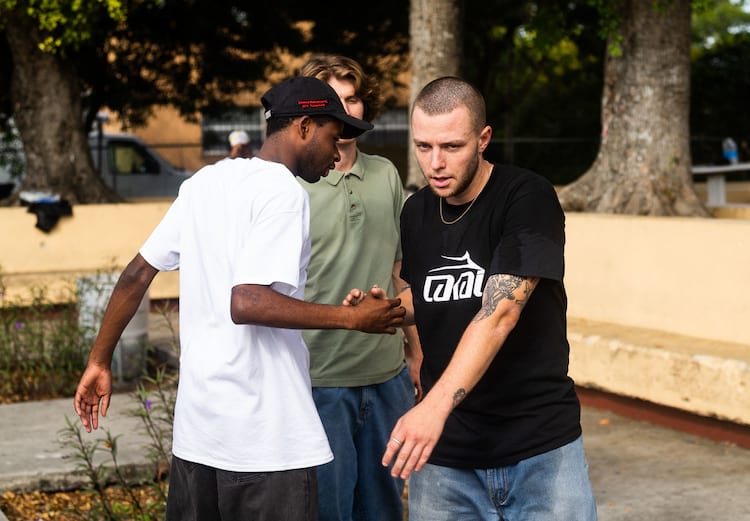 When they were still allowed, skin slaps keep the stoke high

Is turning pro a personal goal for you?
That’s a funny question. Obviously it’d be sick and it’s a goal but you can’t focus on it. Just gotta do your thing. This trip is like a stepping stone. Like you go on this trip and everyone’s waiting for it.

Did you skate with Simon or Jesse much back when you lived in Seattle?
Not really. We were all on different ends of the city. We wouldn’t link up too much. We were all homies, though. Jesse was definitely more on the tranny side of stuff, too.

Was the trip hard for you?
Shit, for me it kinda takes a long time. I’d feel weird sitting at a spot for two or three hours when we could just go to a handrail and they grind it and we keep on moving.

Even at home you kinda skate on your own.
Definitely not alone but more of a tight, small crew. Just a couple homies and a filmer.

Who gets MVP from the trip?
Giovanni literally skated every spot but Jack stood out more in my head. It was like a joke at one point with Gio like, “What are you gonna do next?” 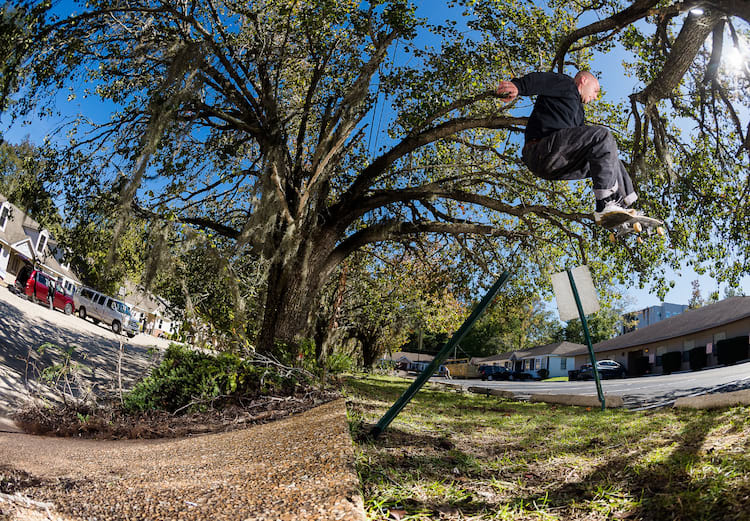 How fucked was that 50-50 shove Gio did?
Just a regular grind would’ve been fucked-up gnarly but then he did a full pop shove it.

You think Jack is gonna get the cover?
For sure, either one of his grinds.

What name from the crew do you think we’ll see on a board first?
I would say Giovanni but he just got on Primitive, but to me he’s a pretty great skater.

For some reason I feel like Aaron will go pro first.
Everyone on the trip was unbelievable, but to me Jack and Gio just feel like pro skaters. Ish could go pro soon too.

What defines an am to you?
I feel like you have to be publicly announced on a team but you aren’t pro and your name isn’t on a board.

Had you been to Florida before?
I had been to Orlando before. On the trip everywhere was cool but once we got to Miami I was like, Man, why weren’t we here the whole time? Everything just looked better, nicer on the eyes. 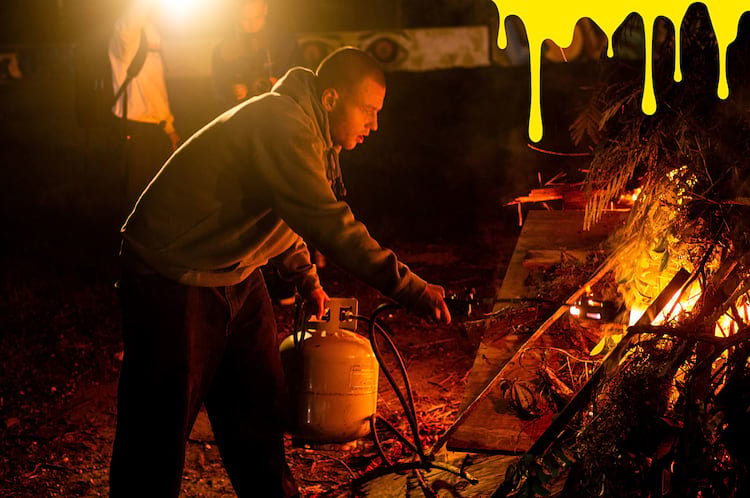 Making sure they don't all get fucked, Griffin gasses the fire

What’d you think about Kona?
That might’ve been the highlight of the trip to see in person, skate tourism-wise. That made the trip for me. Not that I can skate tranny, but just to see it was cool.

Can’t beat pumping down that snake run.
It was a good time, too. It was a good moment for everyone. Standing around the bonfire, too.

Glad no one got hurt trying to light that thing.
If anything would’ve happened we would’ve all been fucked.

What was your reaction when you broke the rail in Gainesville?
That I shouldn’t have been skating, I was just sore and heavy footed. And then it just felt like a sign that I wasn’t feeling it. It was a reassurance I was still rusty. It was something I really wanted to skate and then I broke the session.

But if it weren’t for that, the tea shop party wouldn’t have happened.
I couldn’t show up late to a tea party.