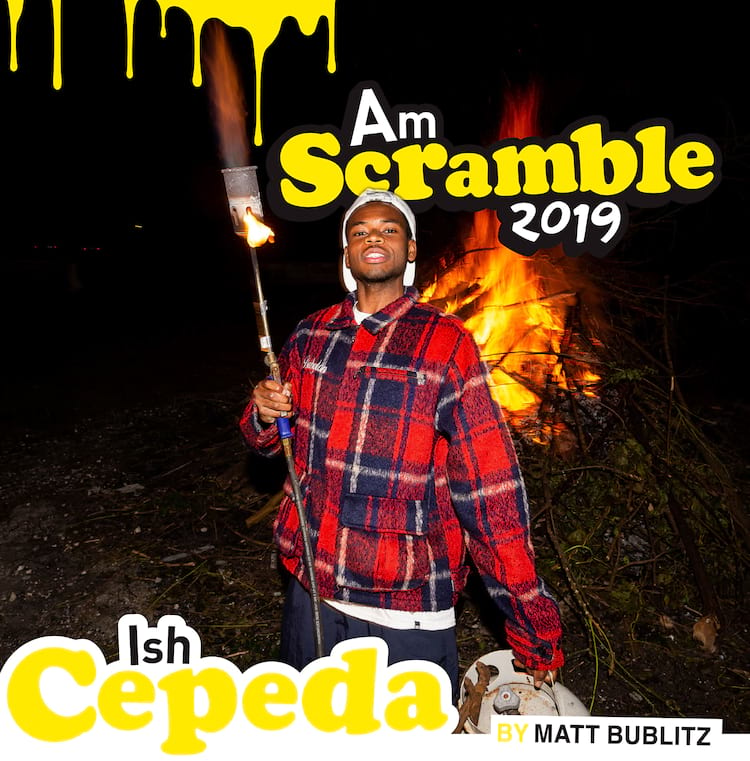 We got to know Ish on Jamie Foy’s SOTY trip and he’s the kind of skater you gotta have in the van—upbeat, positive, always trying his hardest. His natural curiosity about things make him super interesting to talk to and his friendly demeanor makes him feel like an old friend. Last year, his Get 2 Scrolling part got a lot of people in his corner and he's only blown up bigger since. This was a trip home for Ish, but after the Scramble, you were more likely to find him anywhere else. Before his travel plans were put on hold, we talked to the jet-setter about his time in van. He reps April, DC, Thunder and Shake Junt. And after this video gets out, possibly Chick-fil-A.

Ishman. Who are you going to Australia with?
So it’s me, Alex Midler, Ryder, Ishod, Zion, Sunny Suljic, Davonte Jolly and Robert Neal. It’s a big crew. Hopefully we’ll meet up with Jack O’Grady out there.

That sounds like a sick crew. What brings all you guys together?
For Davonte’s video. He’s working on this full-length video with all the homies in it.

That’s rad. So you’ve been traveling a bunch lately.
Man, I’ve been everywhere to skate. It’s crazy. It can’t stop. So this year I went to Melbourne, Denmark, Portugal, Spain, France, Korea, New York, Florida—everywhere. Moving. It feels like every two weeks I’m on a trip. 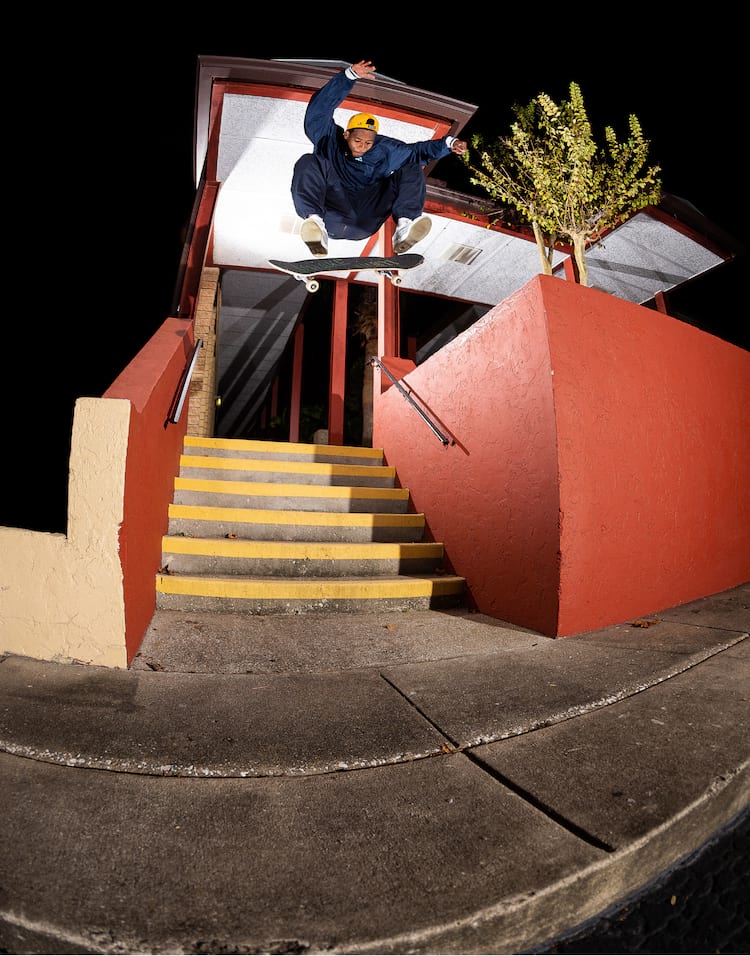 Always in the air, Ish takes a flight from the stairs to the street with this frontside flip

Dang. Is that the way you like it or is it kind of too fast-paced?
Hell yeah. I hate being in the same place.

Do you call any place home right now?
Long Beach. That’s where I live. That’s home.

How often do you get back to Florida? ’Cause that’s where you’re originally from, right?
I go to Florida like once a year. It’s kinda hard to go because it’s expensive. The times I wanna go is usually the holidays so flights are hella expensive.

What were your thoughts when you got invited to go on the Am Scramble?
I got a text from Burnett that said like, “Yo, are you down to go on Am Scramble? We need you in the van.” I never thought I would ever go on one of these. I just always thought it was the gnarliest dudes going on that trip. I didn’t look at myself in that limelight. I just be skating, man. When I watched the videos, the first and second one, it was just the gnarliest up-and-coming people. Everyone on those trips was insane. Damn near all pro. It should be the Pro Scramble. All those motherfuckers are pro.

How was the vibe in the van? Did it take awhile to break the ice or was it just good times right out the gate?
The first two days were so quiet in the van. Like, we landed and then Sinclair swooped us up and we were on the way to the hotel and it was so quiet. I was like, “Can I play some music?” So I put some music on but everyone was just quiet. Everyone was just thinking hella hard on what to say. It was crazy. 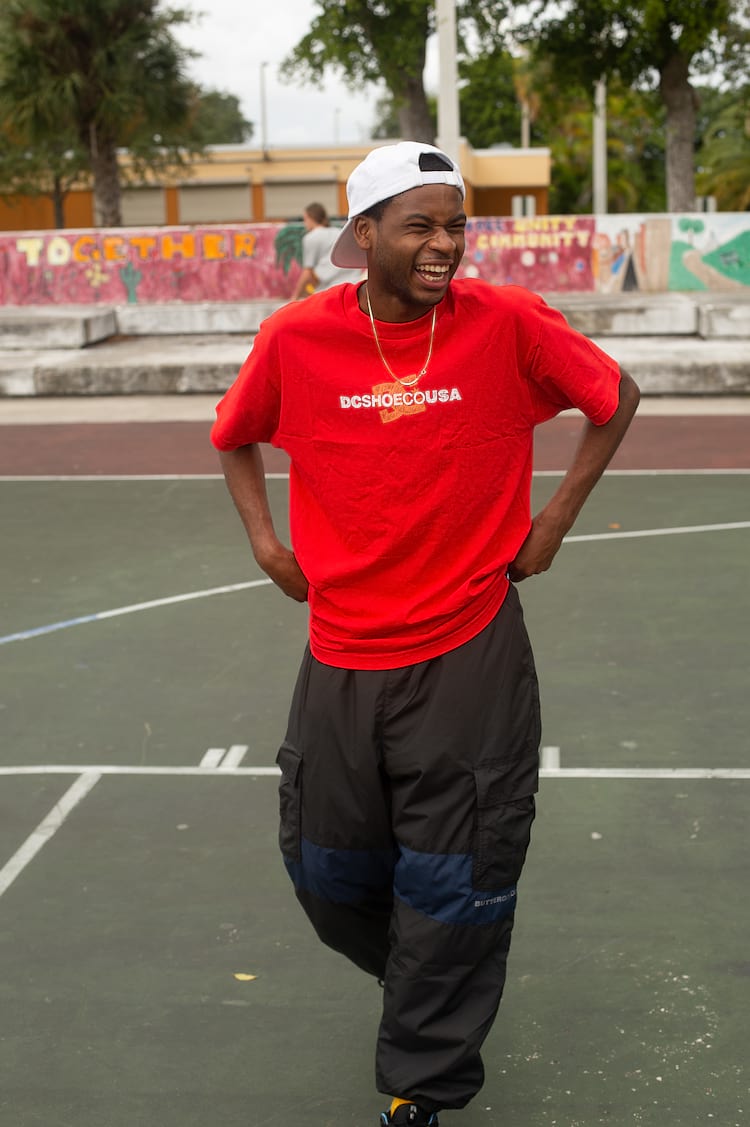 Once the silence breaks, it's all smiles

How was Breezy on the trip? What was she like?
Oh, Breezy’s the homie. She was taking everybody’s money in C-Lo. I think they did a $20 game or some shit and she came up on like $40 or $60. She was just running it up, skating it up, killing it. She would go get beers and shit for everybody. She was definitely the homie. Shout out, Breezy.

She’s so hard without even trying. Did you have a personal favorite city that you liked going to on this trip?
Miami was so dope.

I feel like that was at the end of the trip, too, and everyone was getting along and the weather was nice and it was tropical.
Weather was so nice, so beautiful.

What do you remember in Miami that stood out?
That damn hubba that Jack grinded. That shit was crazy. I remember he just did it out of nowhere. I went to the store and got a banana and a water. I was walking back eating my shit and I just seen Jack grind down the hubba. I was like, Holy shit. He just grinded that big-ass hubba. I was freaking. 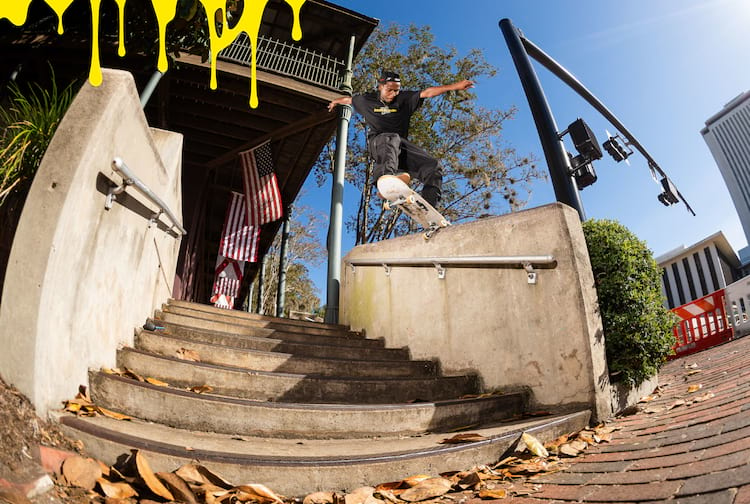 Frontside 180 nosegrind for the Stars and Stripes

Dude, it was intense. Especially the situation with getting kicked out and kinda barging the run up.
Yeah, and they held the door open. That was wild.

I was definitely watching that with sweaty palms like, This is gonna be really intense.
Shout out, Jack O’Grady.

Did we blow it by not going into your hometown and exploring?
Nah, not at all. Where I’m from there ain’t nothing to skate out there. That shit is trash.

So you don’t miss it too much?
Nah, I don’t miss it at all. I mean the fam, fasho. Fam’s doing good, but other than that there’s nothing there for me. That place is trash.

That’s the thing, especially in this past decade—so many skaters have come out of Florida. It’s like a generation of Florida skaters. Why do you think there’s so many good skaters who come out of Florida?
I think maybe just a lack of recognition or some shit. Maybe people from Florida have something to prove. ’Cause everyone who came out of here is insane. You got Reynolds, Blake Carpenter, Jamie Foy, Zion Wright, Tyson Peterson—shit, the list goes on.

We definitely have to talk about the rap song. Break down how the Chick-fil-A rap came about. How did you get into recording with Aaron?
We were just sitting there and Aaron had his whole studio and he’s like, “Yo, let’s make a song.” I was like, “Alright, let’s run it.” So we were playing a couple beats and since we had Chick-fil-A that day, we just started singing about Chick-fil-A and it just became a song. It was hella funny. I don’t know how it happened. We were up ’til like four making it and then Aaron perfected it. Shout out my engineer, Aaron Goure. But yeah, we just worked on it and then it ended up being a song. I feel like the music video’s gonna be beast.


Dude, it’s really good. I told him I think you guys should sell it on iTunes. Kids would buy that shit. It’s so catchy. He’s a really good producer. Everything’s so on point.
I think we’re gonna put it on iTunes.

What’s a favorite line from the song that you wrote or one that sticks out to you?
“Chicken sandwich with fries, barbecue sauce on the side, you my ride or die.” That’s probably the one, fasho.

What draws you to Chick-fil-A as a restaurant?
All the sauces. The bread is hella good.

What are some other things you remember from the trip? Do any sessions stick out to you as being fun or epic?
That night when we skated the rail. It was me, Gio and Aaron. We were getting close to our tricks and then Gio landed his and then Aaron was like, “Yo, put some music on.” And I forgot what they played. It was some famous-ass song. But Frank played it. Shout out, Frank. And right when I heard it I landed my trick. So that night was beast ’cause it was hella cold that night and I didn’t want to skate the rail and it was hella late, too. So I was like, Shit, I don’t know if I can do this and I’m the one who suggested the spot. Fuck, I guess I gotta skate it, man. Then it worked out. We all got our tricks, so that was dope. That session stood out to me.

That one was really cool. That was the heelflip crook, right?
Yeah, yeah. 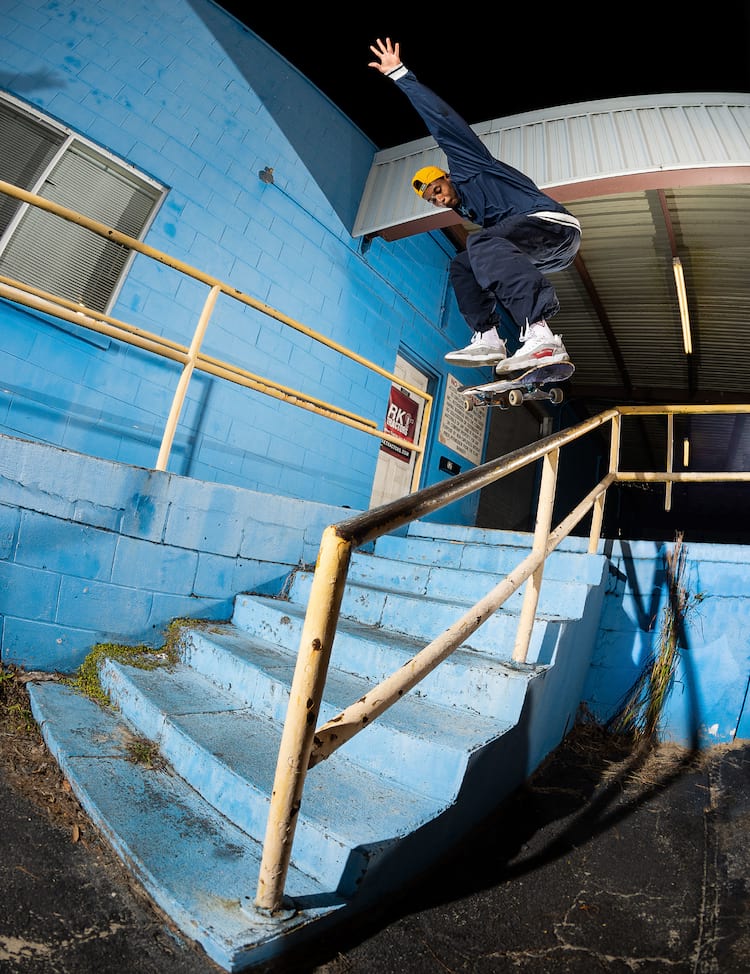 Late night dance party at the yellow rail. Ish cuts a rug on the heelflip crooks

Tell the story about the mid-session tea time. I remember we were fixing that one flatbar and then we walk in and you guys are sipping tea.
The tea party was beast. We were at some spot and the homie from there, shout out the homie Ben, he was saying, “Yo, this spot’s right next to a tea place.” Then I was like, “Shit, I’ve never had tea from a real tea place. Let’s go get some tea.” It was nice inside so I was like, “Man, let’s just sit down and have some tea in here. This is dope.” Then they had the little hats and they gave us gloves and shit. Little tea hats.

It was insane. I walk in and Sinclair looks like Mrs. Doubtfire. It’s like the most elegant English sort of tea time in the middle of a skate session. It was insane.
Yeah, it was very elegant. It was dope. 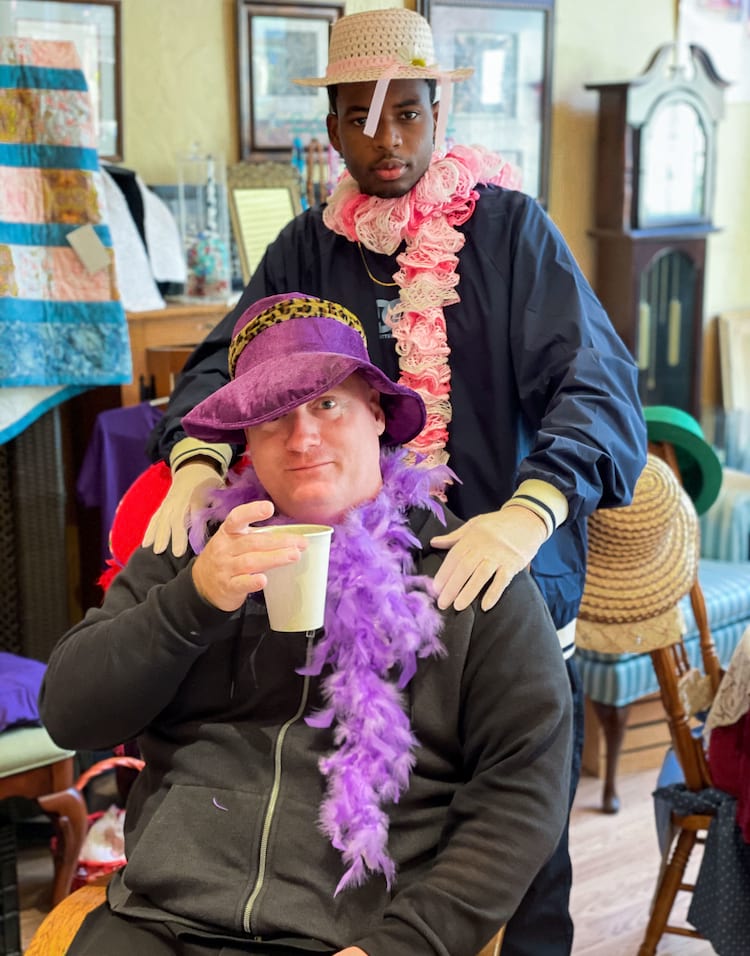 Feather boas are mandatory for the authentic tea experience

Did you make a connection with anyone on the trip in particular?
Probably Jack O’Grady. Definitely. I didn’t really know him before being on this trip but that’s my boy now. That’s the homie. Hopefully I hook up with him in Sydney. He’s actually leaving tonight as well but he’s on a different flight. But I think we’re gonna try to link up out there, fasho.

Who’s the MVP of the trip in your eyes?
Oh, Jack. Jack or Giovanni. Giovanni was getting it on, too.

What trick, if you were to pick, would get the cover? Which one do you think will get the cover?
The back 50 on the hubba. Definitely that.

Especially from your Instagram it seems like you’re into science. What accent is that when you’re doing your Instagram videos where you have observations?
Well, I haven’t done them in so long. I lost the password to that account so it’s over. But I don’t know—it was like British and Australian mixed. I just tried to sound smart.

Do you have any go-to shows for space stuff?
I like Neil deGrasse Tyson. This dude Lawrence Krauss, he’s really dope. And I be watching Joe Rogan, too. He’s tapped in with all that shit as well. He always has cool people on his show and I just be listening to his podcast.

Have you ever worked a normal job?
Yeah, I worked at Papa John’s in Florida.

That’s cool. At least you know the other side and that will probably help as far as being grateful for the skate life. Is living the sponsored skate life without having to work everything you thought it would be?
I be forgetting how crazy it is just being able to do what we do. Very lucky to be here. Could be a lot worse. Being able to go on trips with the homies and get paid for it, that’s pretty crazy. 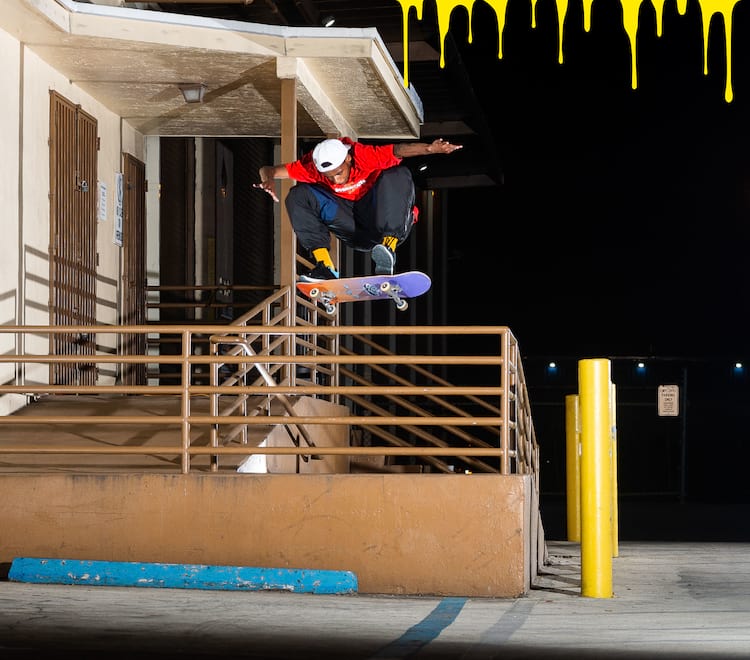 Two trips and six hours later, Ish sailed the front heel up and over. Breezy almost fell off the roof of the van
© 1981–2021 High Speed Productions, Inc.